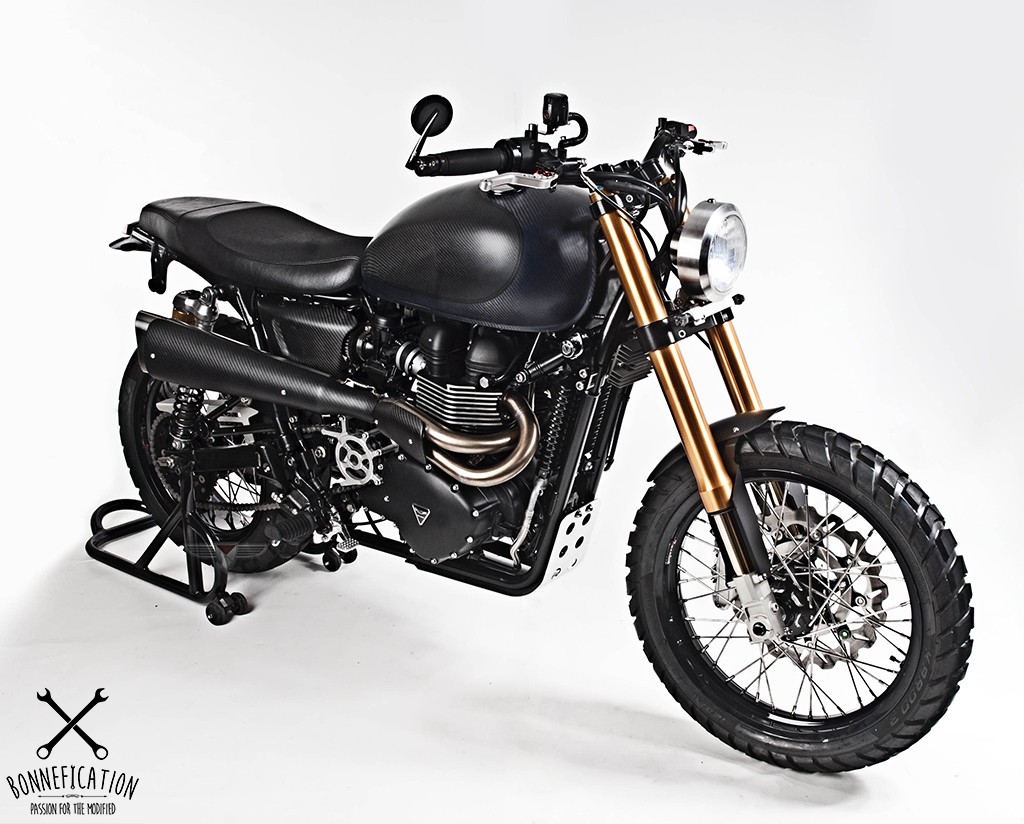 When you customise or modify motorcycles, be it for hobby or as a job and a friend says to you ‘do want you wanna do‘ with a 2015 Triumph Scrambler. A guy or girl couldn’t help but grin. This is what I imagine Ram of the Indonesian based White Collar Bikes did when his friend Rudi Soegono uttered those very same words. You May remember Ram’s previous work the Bhaskara a bike which we featured back in July of last year. A Triumph which was also shown in the article I wrote for the May edition of Classic Bike magazine Retro supmement- A bike which may be one of my all time favourite custom builds. 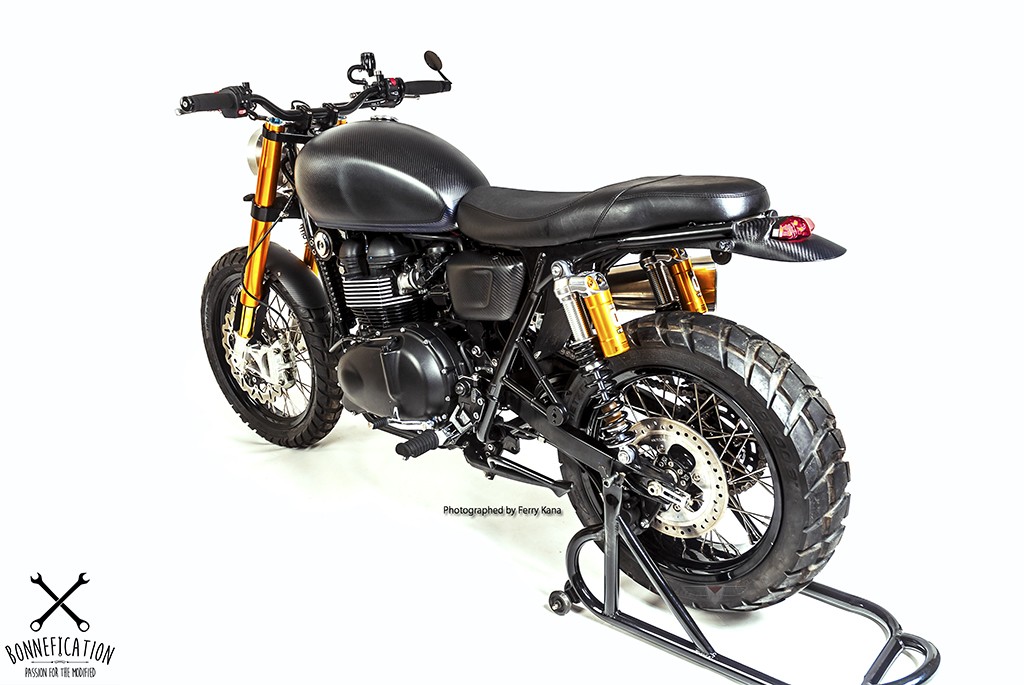 But that grin may of only lasted a short while, as unlike the Bhaskara which featured more custom parts than a 1960’s moon lander, Rudi, the owner had already purchased a vast range of goodies from LSL’s excellent catalogue, which he wanted fitted. For many custom builders this is a little rude, especially when you’re a fabricator of Ram’s skills. At first Ram didn’t like the idea of using another manufactures parts, but like many custom builds which are funded by mortal men, the budget had other things to say. 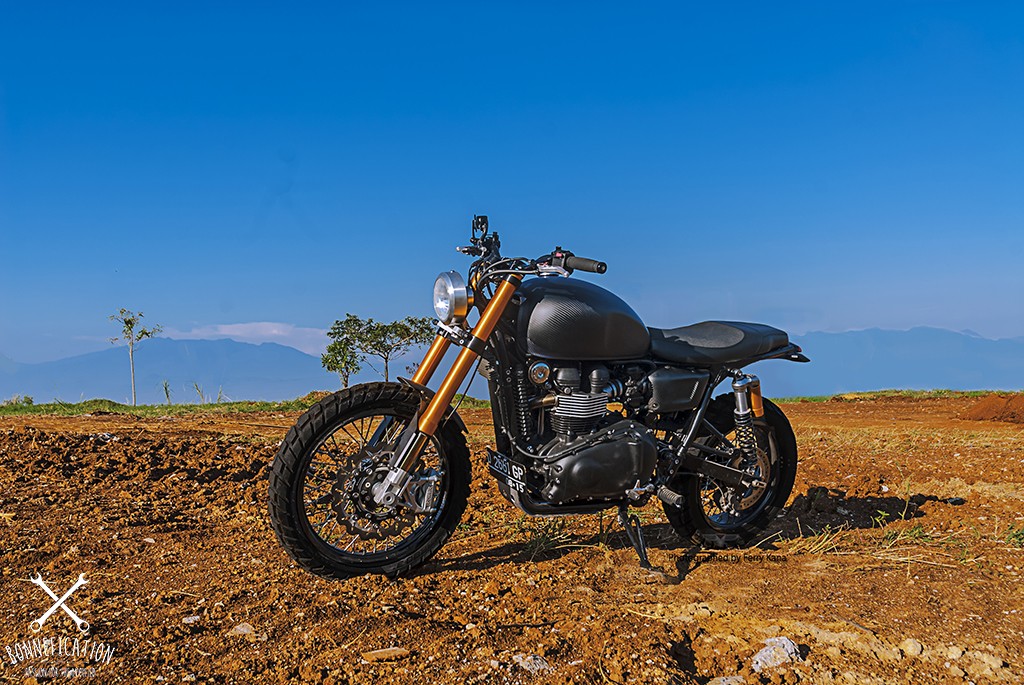 We all know a budget can choke a custom Triumph Twin build, first there is the huge outlay of buying the donor bike, lets face it Triumph Twin prices are not really decreasing in value unlike many modern motorcycles. Which is amazing considering jut how many Triumph Twins are out there – with the new Scrambler in particular having a waiting list to buy- meaning you’re not really going to see much change from £15k+ to 523585026.50Rp+ (IndonesianRupiah). With this and his friends bank balance in mind, Ram set about building a custom Triumph, which Ram hopes will be a little different from all the other Scramblers in Indonesia. 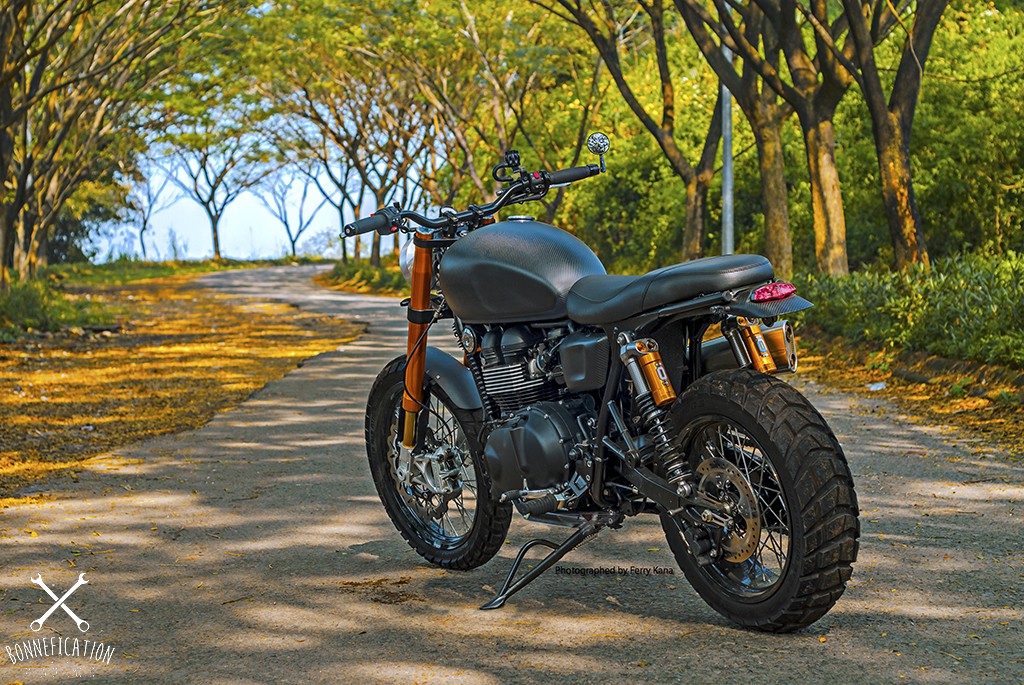 The idea behind the build is pretty simple, the Scrambler needed to look “Bad Ass!!” something which is a the top of my list when looking at bikes.  To achieve the required look Ram went for the super cool Ohlins USD’s with LSL yokes, which makes a huge difference to the look of any Retro motorcycle – keeping in theme Ohlins TTX shocks were used at the rear.

Personally Im not a big fan of the USD’s on the retro Twin, I think they can look too modern, but even I can’t disagree that they don’t look the ‘Bad Ass’  – adding to that Bad Ass look are the wheels (17 x 5.5 rear and  19 x 2.5 front) which are from Ram’s and Bonnefication’s good friends Adrian at Canyon Motorcycles, wheels which have then been fitted with the attractive and moderately practical Metzler’s Karoo 3 Tire, which is another alternative to the popular Continental TK80’s or Heidenau K60 Scouts.

For those that have ridden a Triumph Twin, it will come as no surprises, considering the fork and wheel changes, that the front end braking has had a little upgraded. Gone are are the two blocks of wood and a dodgy 80’s CD which make up the OEM front brake and in place are Brembro’s callipers and Galfer Wave discs, which not only do what they are meant to, but also look bloody great when the Scrambler is standing still. 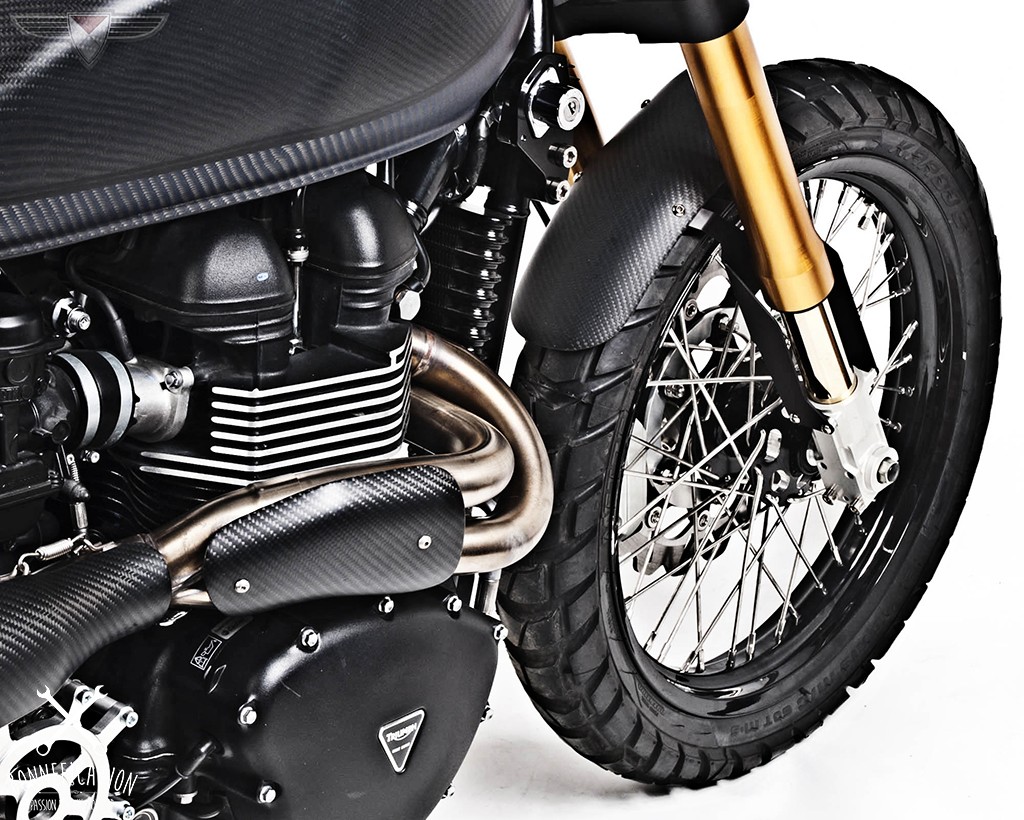 I mentioned that Rudi the owner had already purchased a huge range of parts from LSL,  one of the first to cross Ram’s path was the headlight. Not liking the stock light, as Ram feels its something “anybody can buy”  – he opted to make it a little different. Ram wrapped the bowl in Carbon Kevlar, which was then fitted to the USD forks using LSL brackets. Well this didn’t help much, so Ram fired up the milling machine and whittled out a new bowl from Billet T7 Aluminium, which was fitted with the Scramblers original headlight reflector and wiring. This is turn posed other problem, did this light look out of place compared to the rest of the bike?… for Ram there was only one thing to do, so it was back to the workshop to make a bespoke headlight guard from sheet and T7 alloy. Ram was very kind to supply images of both lights, so you can get to choose which one you prefer. 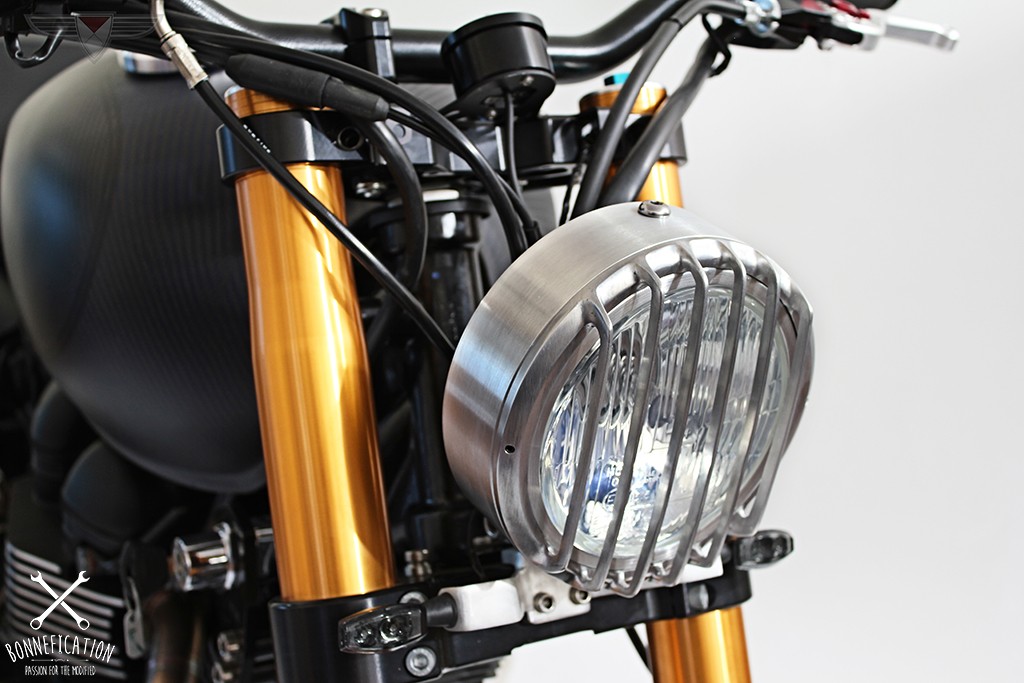 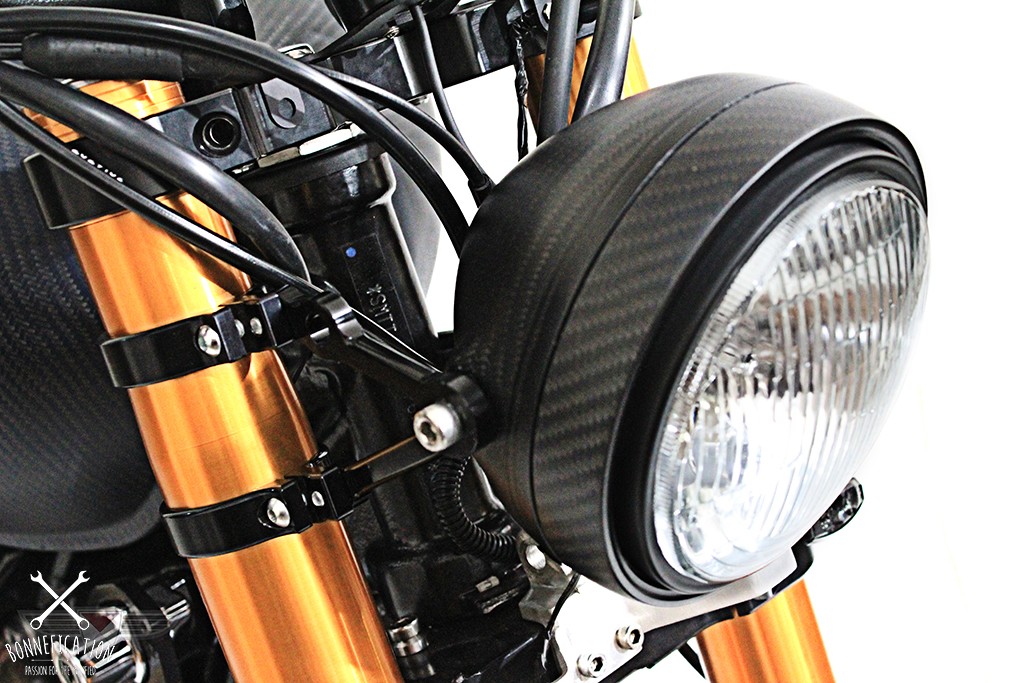 At the back of the Scrambler is a very nice Carbon Kevlar’d LSL rear mudguard with integrated taillight and LSL seat, with the front mudguard and sides panels both being made by Ram in Carbon Kevlar – behind the side covers would normally sit a battery and airbox, this has been replaced with a custom item and conical air filters. 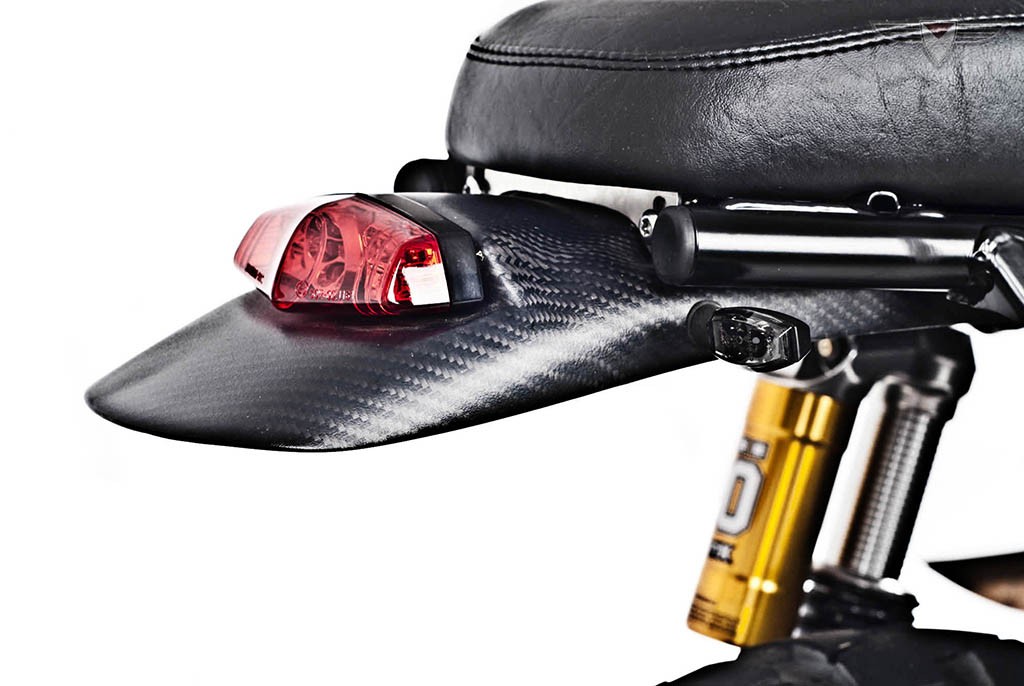 Zard 2>1 exhaust were fitted, though Ram was not sure that the stock heat shields stayed in theme with the rest of The Black Orchid theme, added to this Ram also found the heat from the Zard’s a little to excessive in shorts (no comment) so Ram made some very nice heat guards again in Carbon Kevlar which solve both problems. 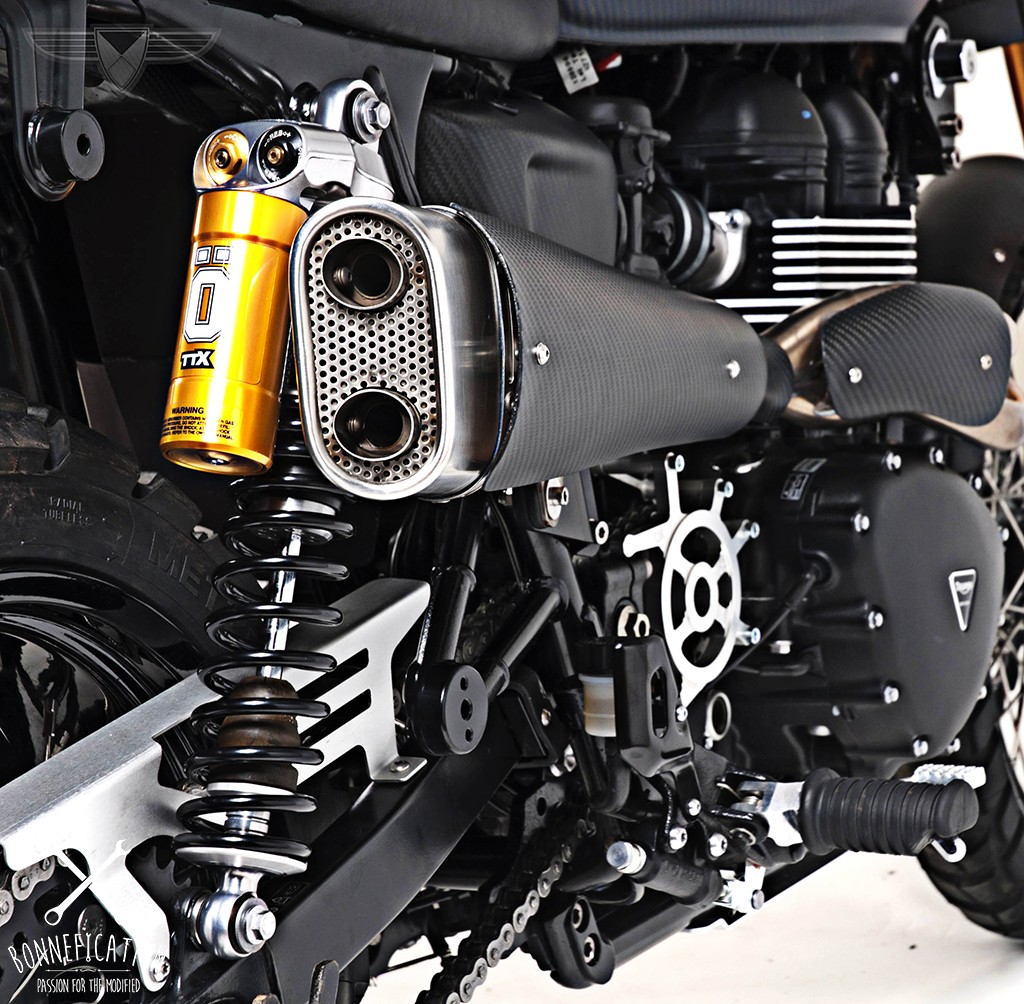 Some may notice the rear exhaust mount hanger is still in place – this is one of those unfortunate situations when modifying the Scrambler unlike other Twins in the Classic range. So you need to ask… do you leave it or do chop?. Cutting it off could devalue the bike and make it hard to turn back to stock if you wished. It just a shame that Triumph chose to integrate the bracket into the frame and not make it bolt on. 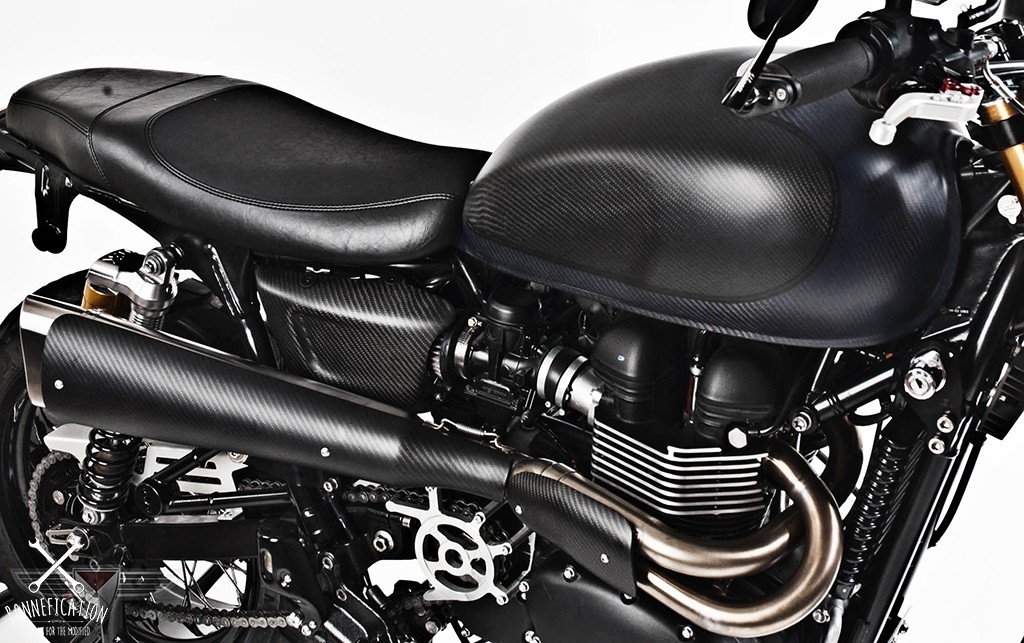 Originally Ram wanted to replaced the stock fuel tank for one of his own design, but due to his father becoming ill mid build this was not possible. With time now an issue as the bike had sat untouched for a week, Ram chose to continue the Carbon Kevlar look on the tank, but even professionals can hit problems. The Black Orchid design was to be in black and red, but due to a few technical issues and running out of red carbon Ram had no choice but to go with blue, which I think works really well. 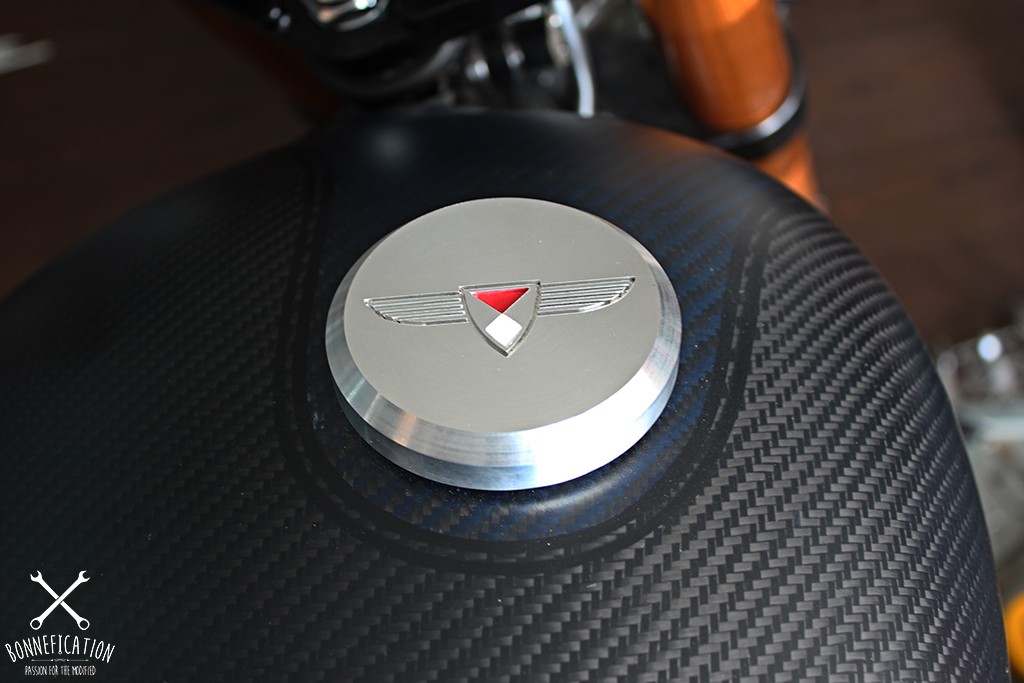 To finish of the Tank, Ram made a very nice one off fuel cap from billet T7 which features his logo in Red and White, colours which represent his beloved Indonesia. The only other issue Ram had with the bike was fitting the Motogadget Tiny speedo to the EFI scrambler which gave poor Ram “major headaches”.

Even after all that hard work Ram is not entirely happy…

Overall I didn’t quite satisfied with the bike because I can’t put my own parts to the bike.. but the bike runs well.. and pretty much a good looking scrambler  that runs great.  and its not a bad bike that I build in just only three weeks.

Regardless Ram, this is a good looking machine and even with all those LSL parts it still looks pretty unique. 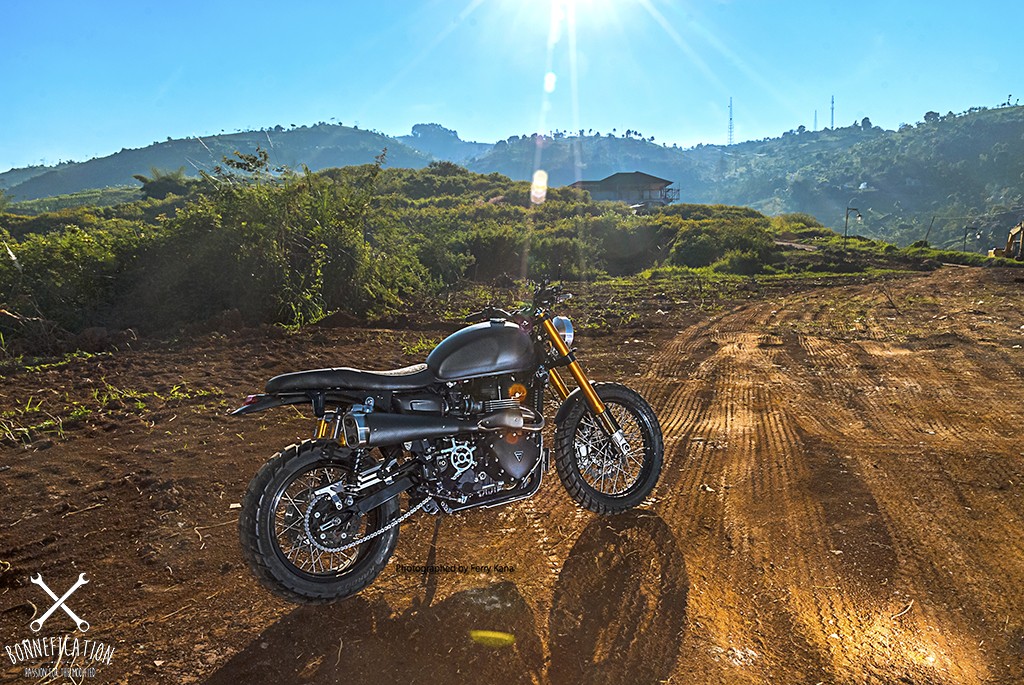 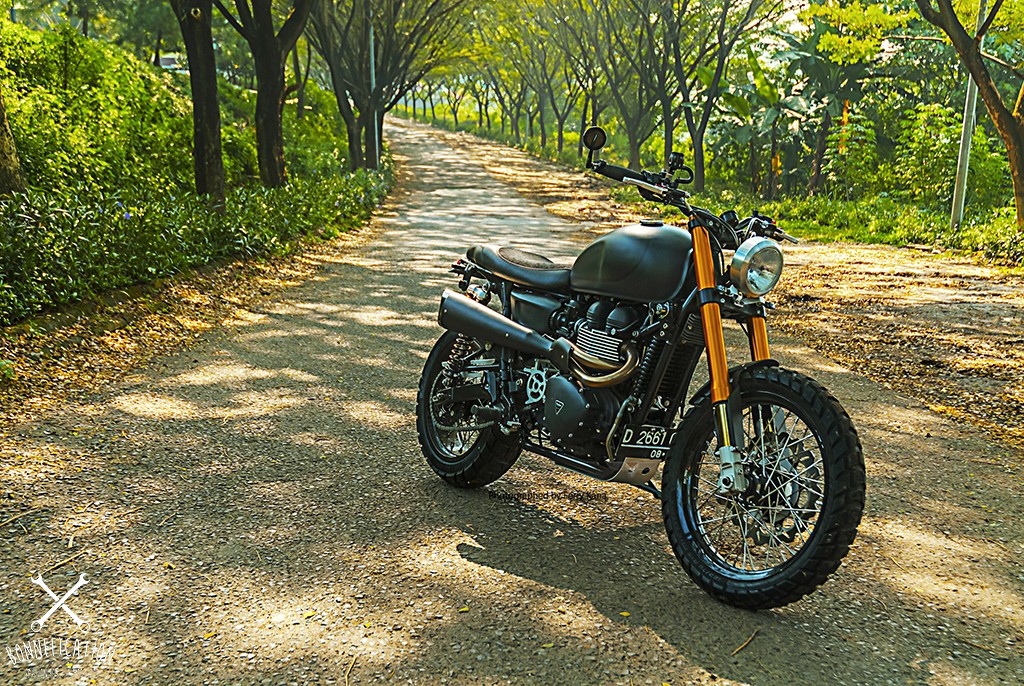