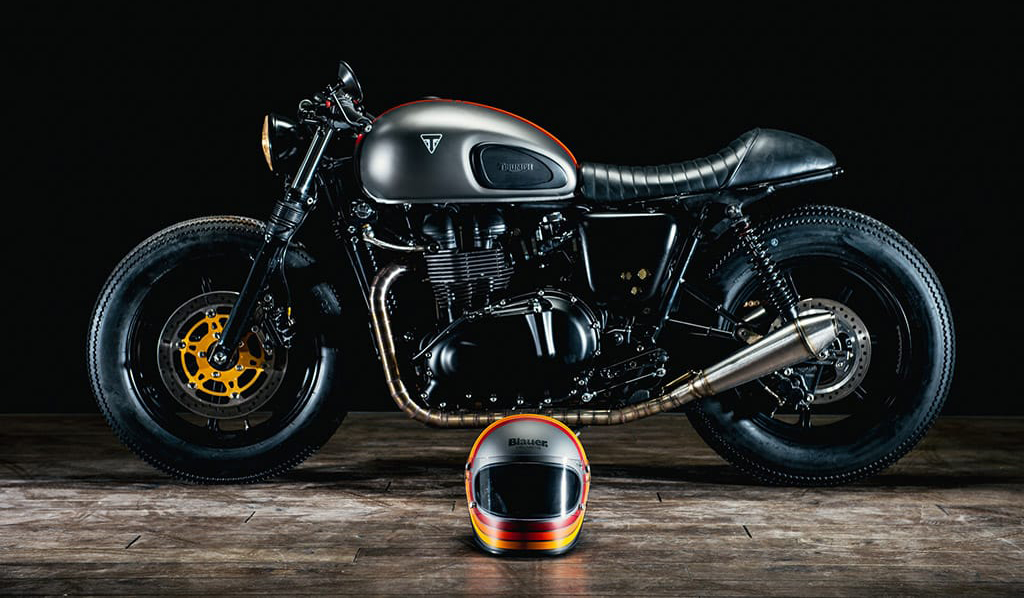 The term ‘Shed Built’ of late has been used to describe an entire custom motorcycle scene, and perhaps no longer the preserve of keen amateurs who actually build custom motorcycles in sheds, garages or even in their living rooms. 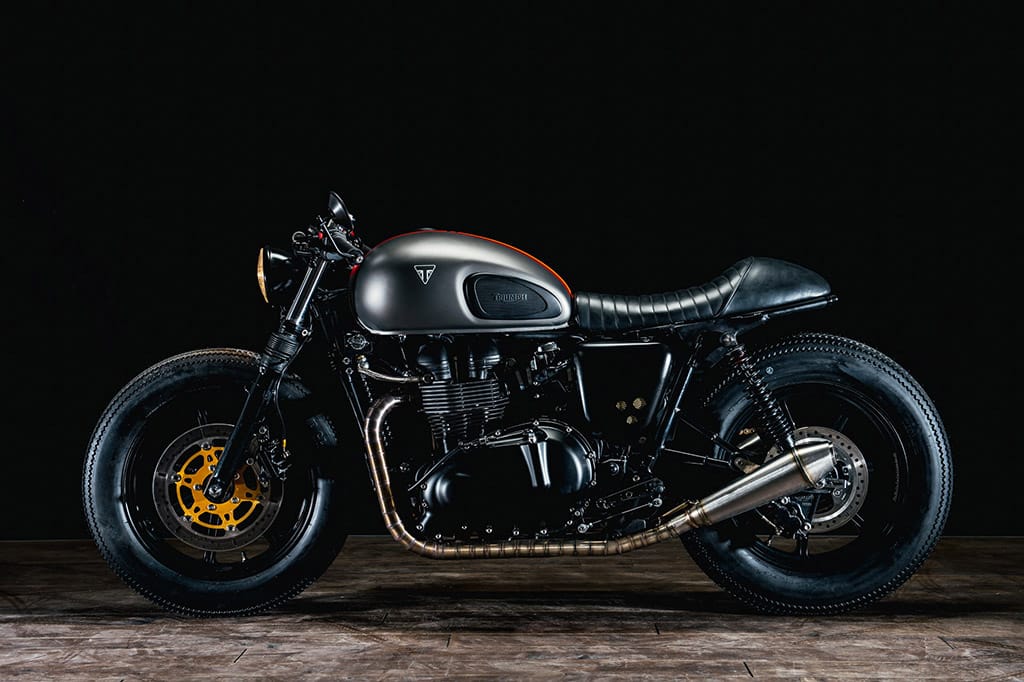 Unlike the pro, the average shed builder may lack the technical knowledge needed to build a custom motorcycle from scratch, but like the pro-builder, they will have a bloody good idea what it is they want to achieve. 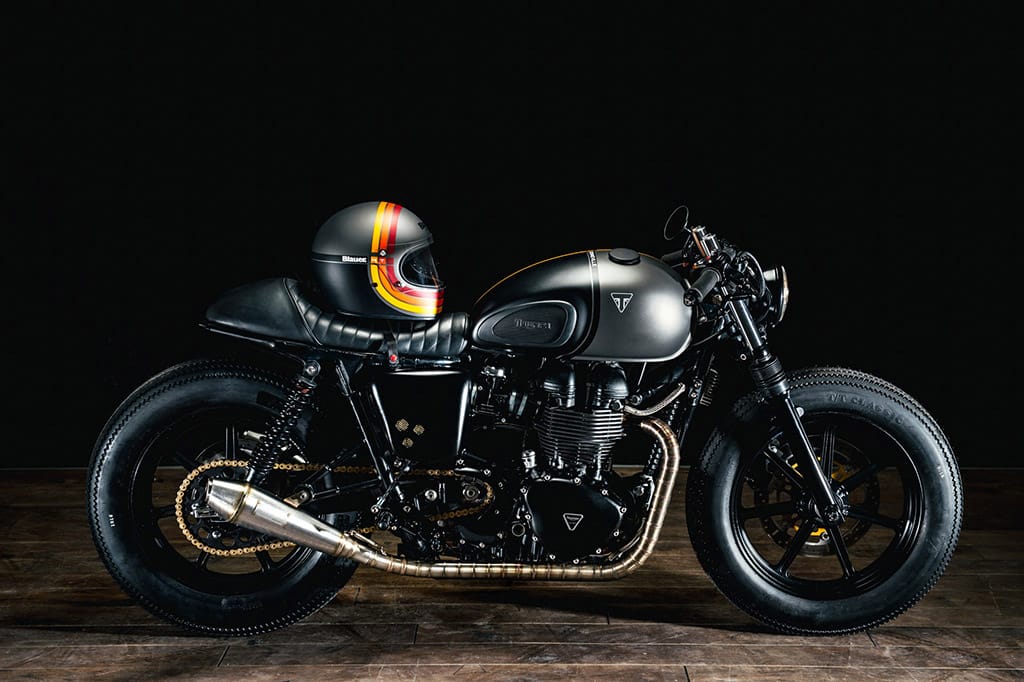 Armed with an idea, all an amateur builder need do is find the right people to undertake the complex aspects of a build. This is what Wojtek Borecki did when he tasked some of the best craftsmen in Poland to help him turn a 2011 Bonneville with just 5000 miles on the clock, into a Cafe Racer reminiscent of Deus Customs ‘Cherry Red’.

Key elements on this build include a shortened and modified frame, incorporating a LED rear light, stop light and indicators, finished off with a new custom leather seat – this tidies up what is normally a bulky tail section and instantly gives this Twin a more sporty character.

Up front the Bonneville sports Cafe-Racer clip-ons, fitted with the original switches and Biltwell Kung-Fu grips, with the sample cup appearing brake fluid reservoir being replaced with one from Rizoma. 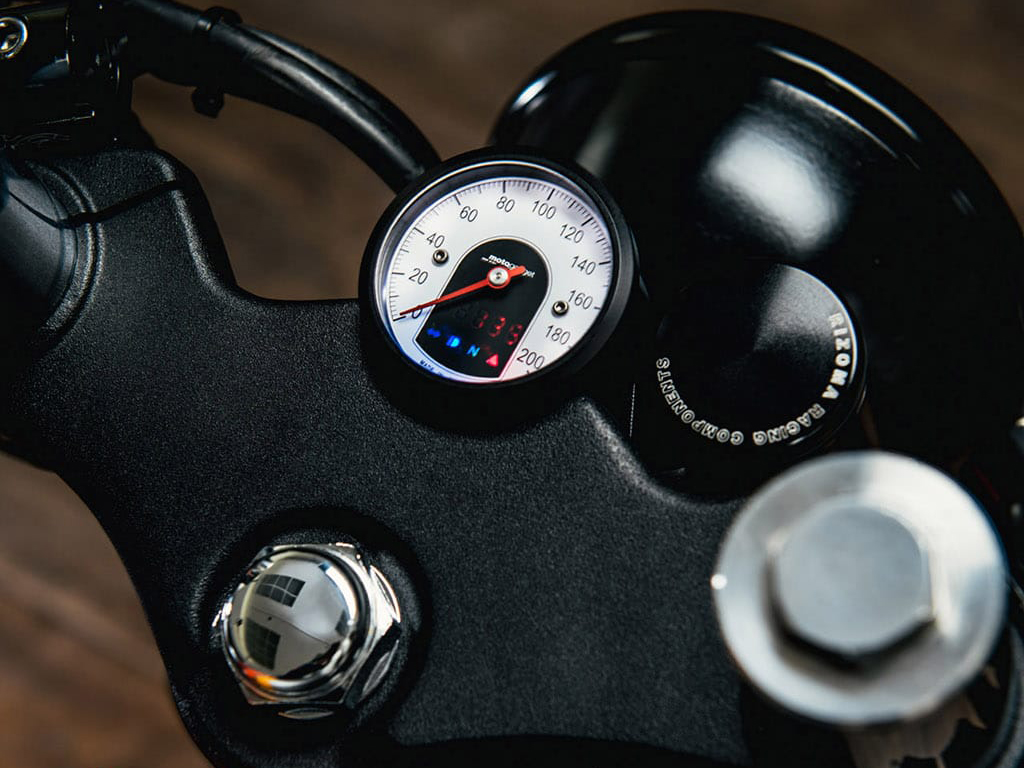 Sitting flush on the top-yoke is a Motogadget Tiny speedo, paired with the Motogadget m-tri adapter, essential when changing the speedo on late EFI model Twins. Finishing the front end modifications is a classic bottom mounted Bates style headlight. 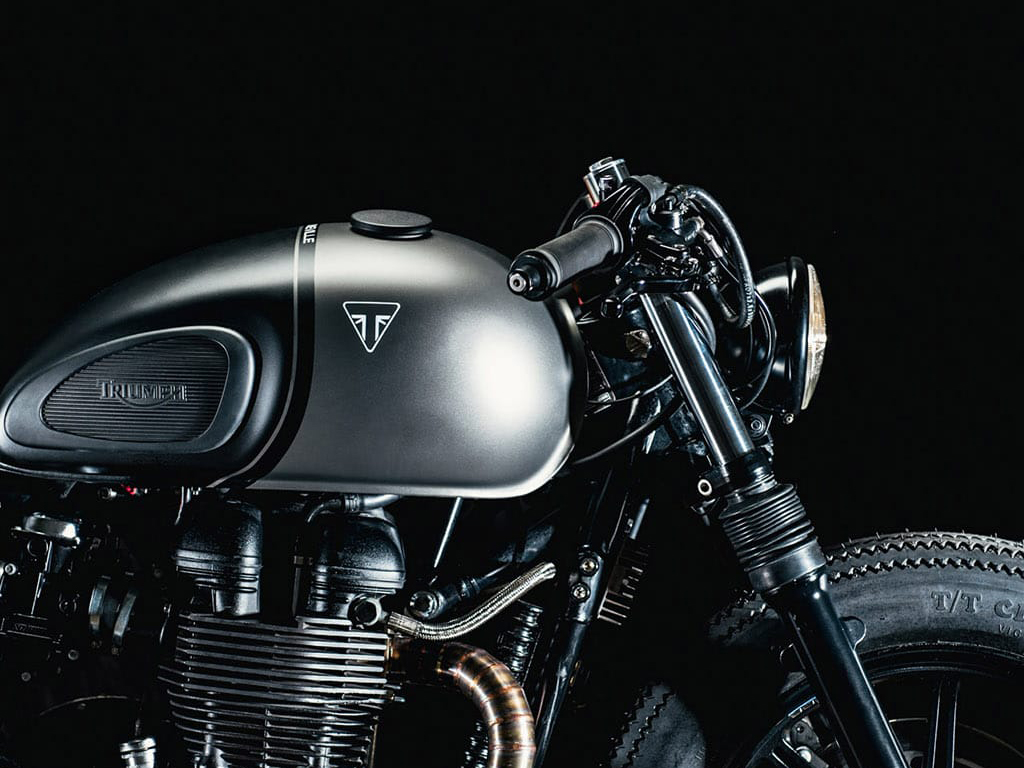 Coming up with an overall style for your custom Triumph Twin is one thing, coming up with how you want it painted can be another issue altogether. And don’t think letting the painter have free reign will make it any easier, this can just lead to disappointment. Fortunately Wojtek knew what he wanted, and the inspiration was his Blauer 80s helmet pictured with the build. 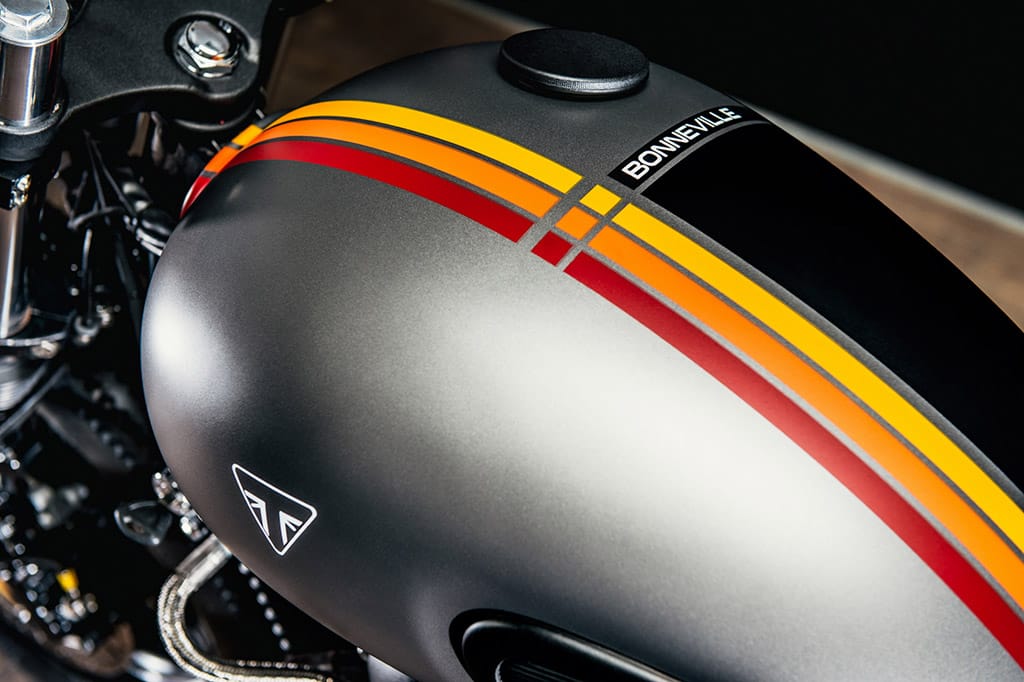 The stance on this 2011 Triumph Bonneville is one of it’s biggest features, having been slammed onto it’s black painted cast aluminium 7-spoke wheels, fitted with classic 17/500 T/T Victory tyres.

Achieved by dropping the forks through the yokes, and the fitting of shorter shocks at the rear. The front wheel has also been fitted with a EBS disc, with the rear being treated to a new sprocket with the now fully exposed gold chain contrasting nicely against all that black. 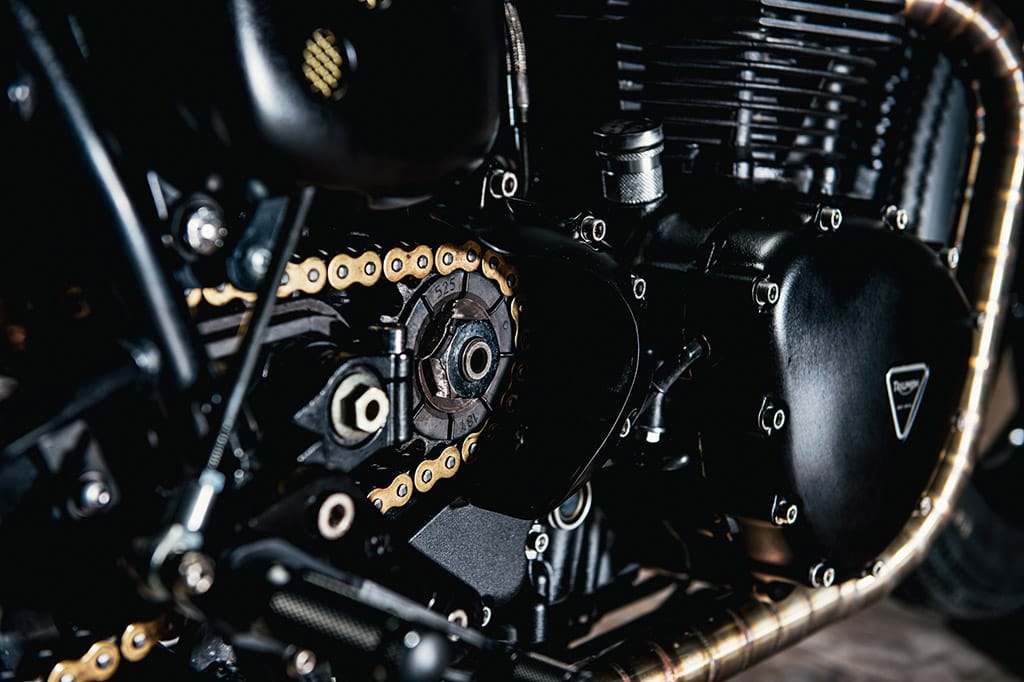 The tyre choice may be controversial, but a scrambler on anything but knobblies is simply not a scrambler, and a brat style cafe racer on road tires is just going to be unremarkable. 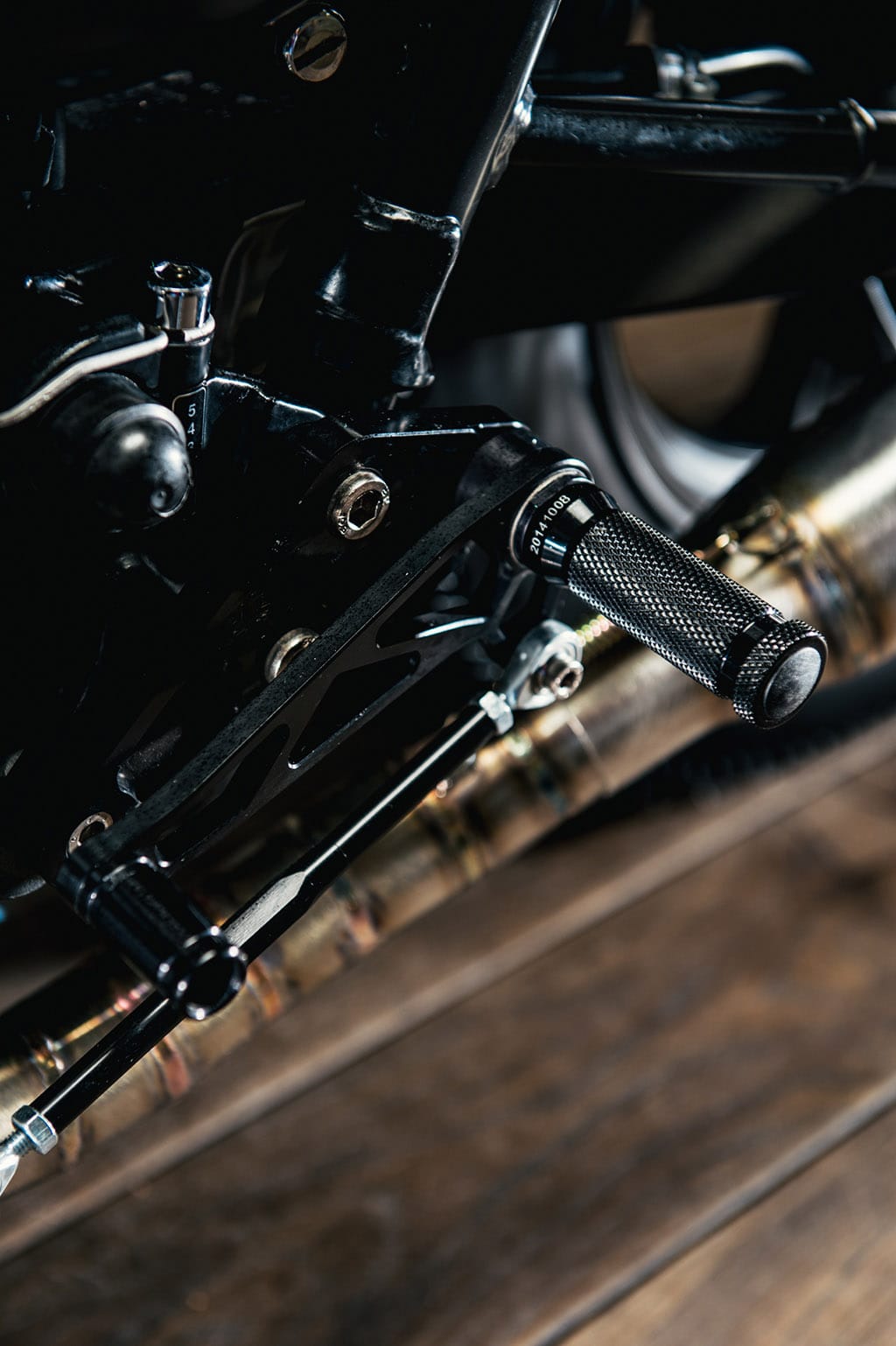 As you would expect the build features all the usual relocation brackets, with details including an oil temperature indicator, LSL pegs and gold meshed vented side covers. This finally brings us to the custom made lobster-cut stainless exhausts system, which Wojtek tells us sounds fantastic, I bet! 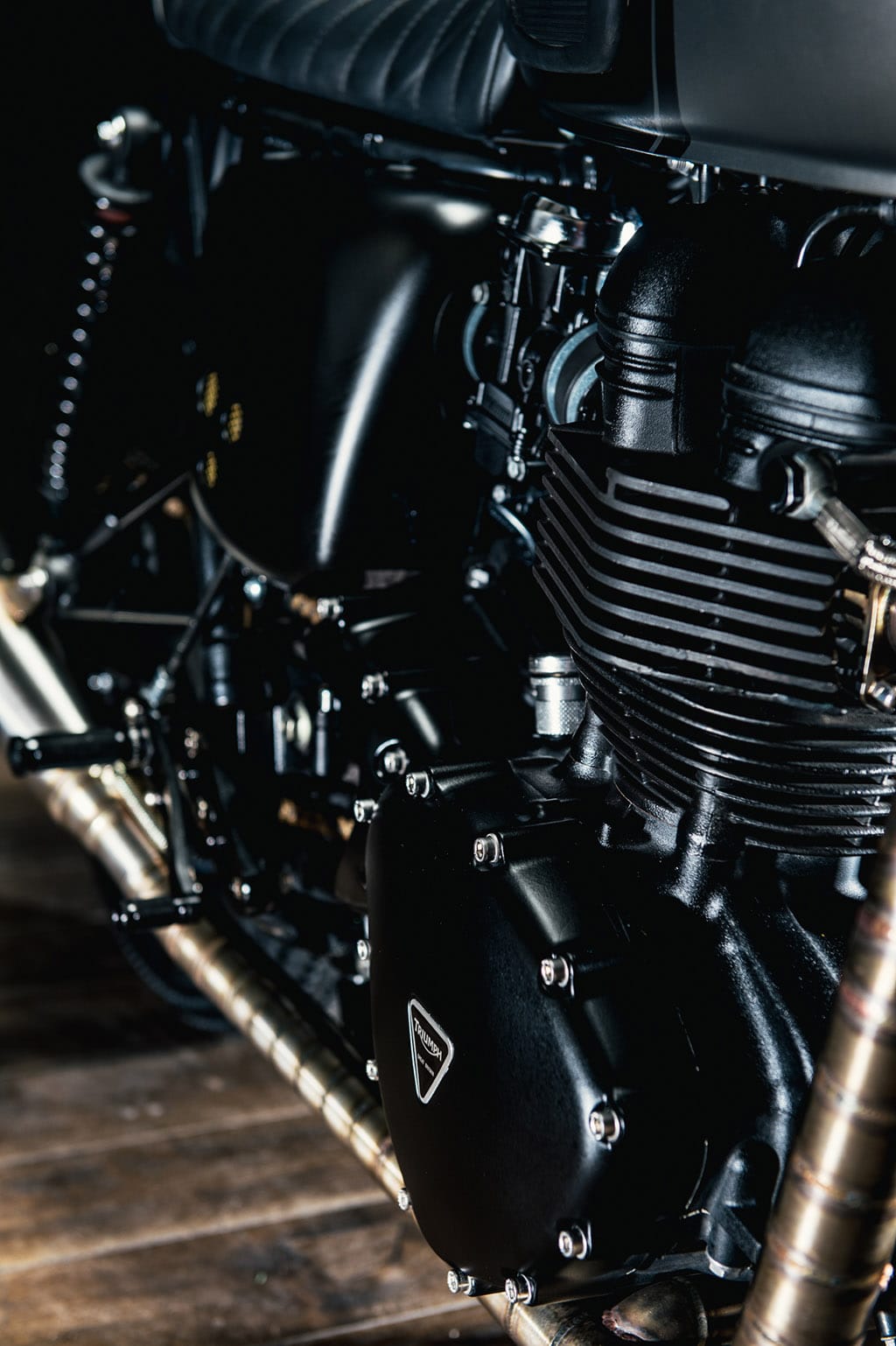 If you want a custom Triumph Twin and don’t have a big budget you shouldn’t be afraid of doing some aspects of the build yourself, such stripping the bike down and the reassembly. Essentialy you become the project manager of your own build, bringing together services with an aim to bring you vision to reality.

So whats stopping you? 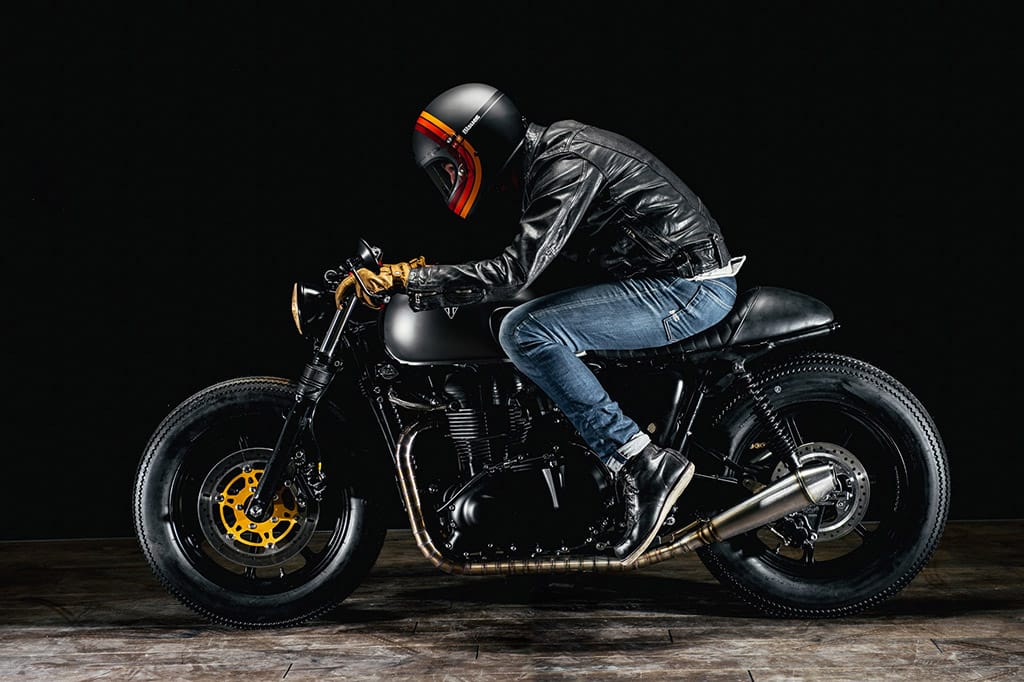