We are getting the impression here at Bonnefication, that some of you are little bored with pro-built customs, seeing comments such as “oh look another black one…” and “… stupid tires again…” or “…same as their last build“, complaining that you want to see more  ‘honest shed built machines‘…meh!…there is no pleasing all of you!
…….
Time for a change perhaps?
..
Over the last decade, modifying the Hinckley Triumph Twin has become easier, more accessible and a lot more interesting for the shed builder. And its the independent manufacturers of off-the-shelf accessories we have to thank, and like you, they are Triumph Twin enthusiasts too.

Many of you wisely don’t want to cut up a perfectly good Triumph Twin, or  have the skills to fabricate an ignition relocation bracket, let alone a petrol tank. Then there is tyre choice, why turn a perfectly good motorcycle into an unrideable static display for the sake of style – instead we choose to  fit tyres usable outside of a photographer’s studio… in other words, real motorcycles! 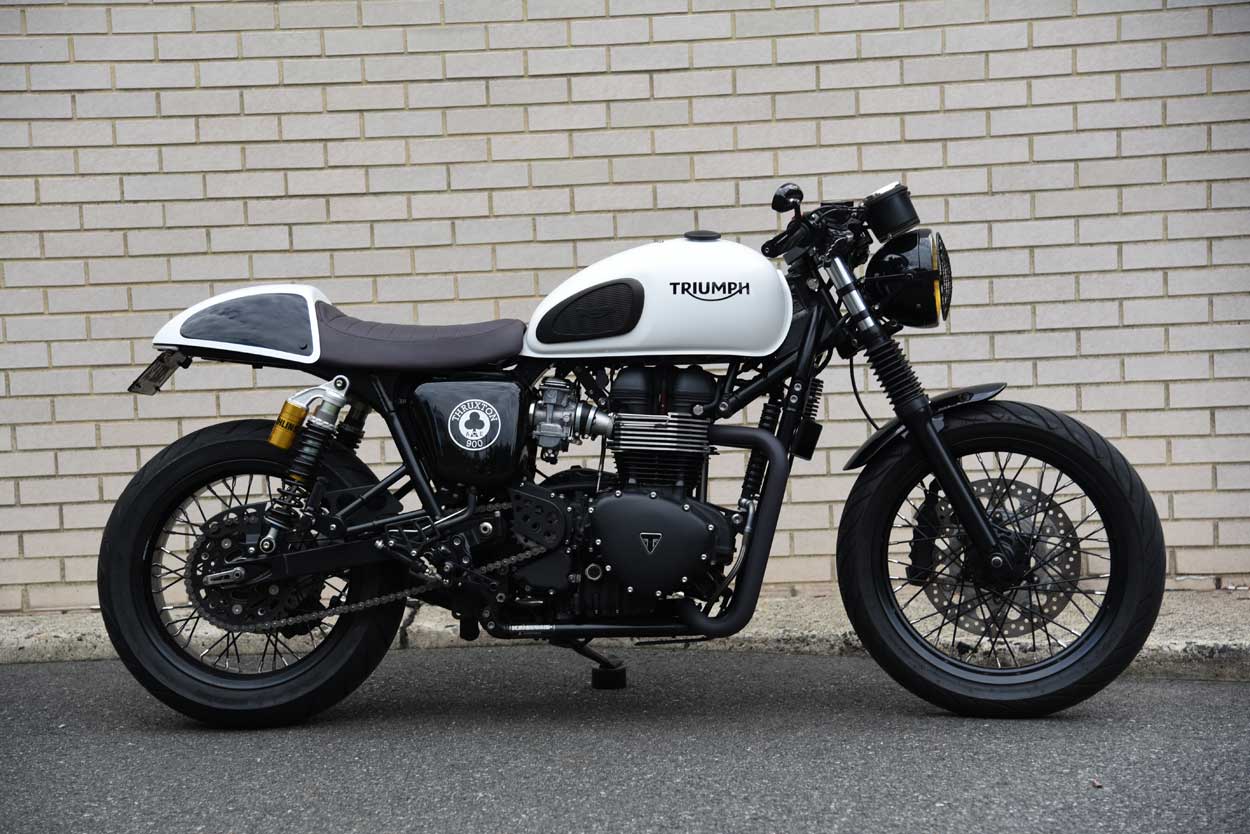 Pro built customs are there to inspire, and for a minority, to own. For the rest of us, there are plenty of off-the-shelf accessories, making modifying and having a super cool motorcycle possible for us all, while at the same time supporting small independent manufacturers the world over, manufactures who spent years and much of their savings bringing you those parts.

With all this in mind, its time to see more of your home grown, shed built, or modified machines… its your turn to inspire. To get this ball rolling, and in his words, here is Adam’s Ace Cafe Thruxton… 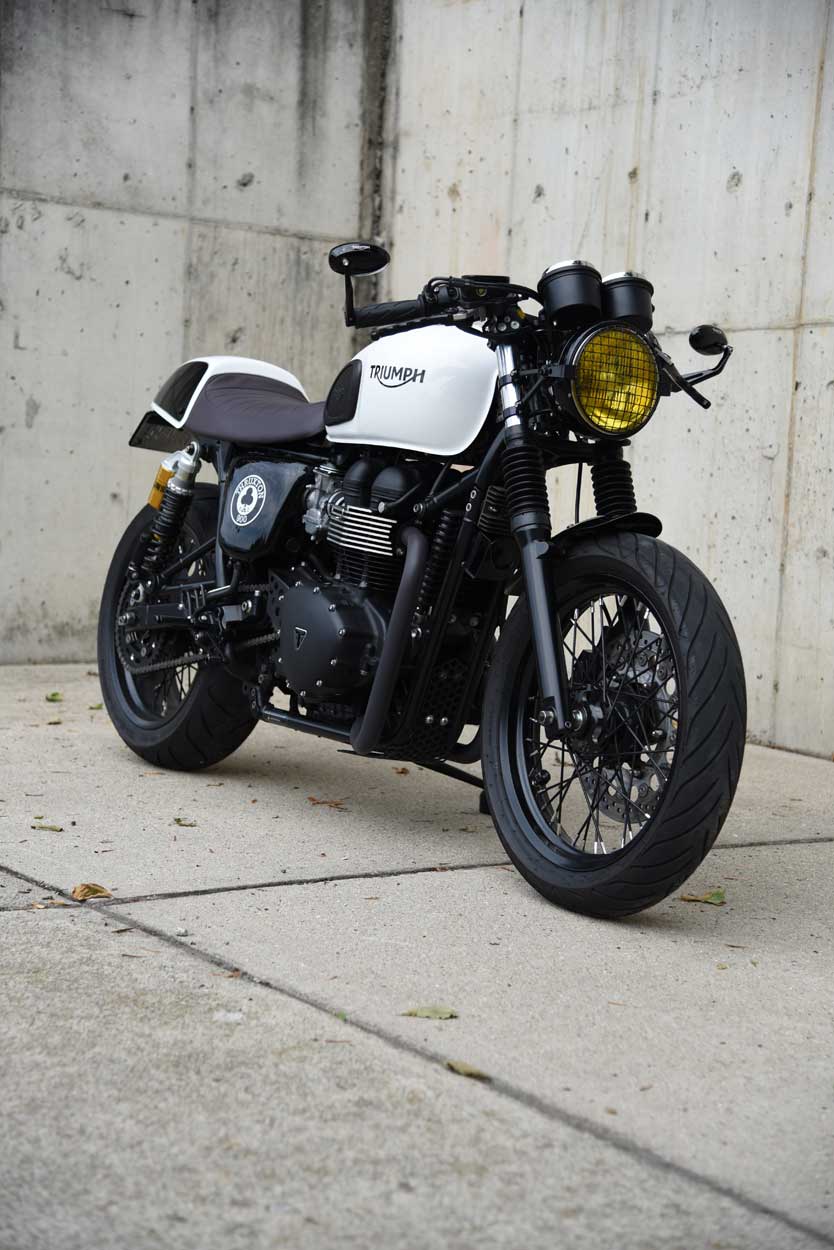 Me, and choosing the Thrux.
“I moved from Brighton, UK to the US in 2012 to work for a tech startup in Manhattan. Over the 10+ years of riding in the UK, I’d progressed from several Suzuki SV650’s to an SRAD GSXR 600 and then, missing the power delivery of a twin, moved to a 2005 Ducati Super sport 900 which I absolutely loved. It wasn’t practical to own a bike when I first moved here, being so close to Manhattan, but after moving out to the New Jersey suburbs it was time to get back on two wheels again”. 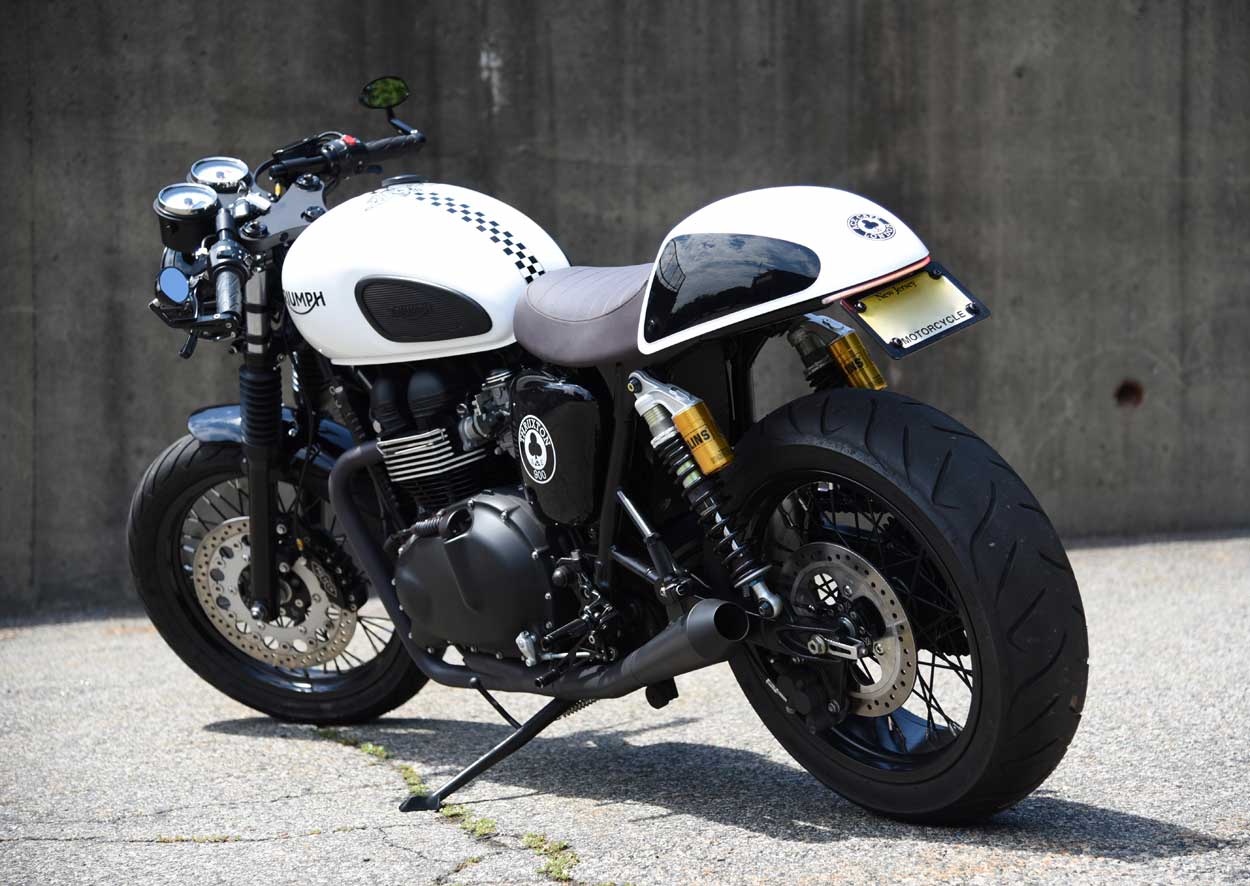 “The first test ride on a standard 900 EFI Thruxton at the dealership was frankly a little underwhelming, and I actually cut it short to hand the keys back. However, an enthusiast on their sales team – who has since become a friend – had been given the mandate to customise a few shop bikes for display. After seeing (and hearing!) these I was completely seduced by how flexible the platform was and the depth of ‘bolt-on’ customisation out there that would let me create a unique bike without cutting the frame or compromising reliability”. 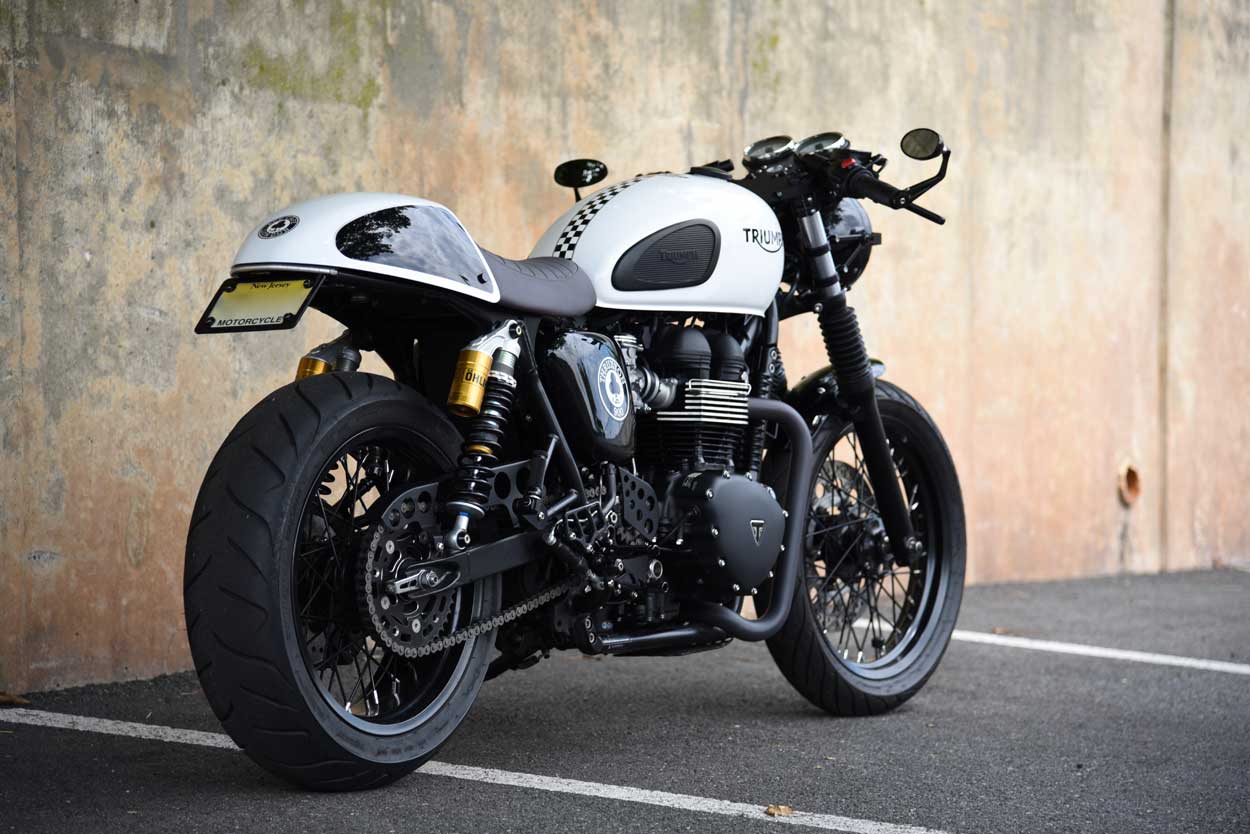 “After researching aftermarket suppliers such as British Customs, and obsessing over the custom bikes on Bonnefication, I revisited the dealer, where they’d just taken delivery of a limited edition Ace Cafe Thruxton. The distinctive factory paint and the fact that the motor was already blacked out persuaded me that it would be the ideal base for a bike I could make my own, so I put down a deposit and started to plan the first mods…” 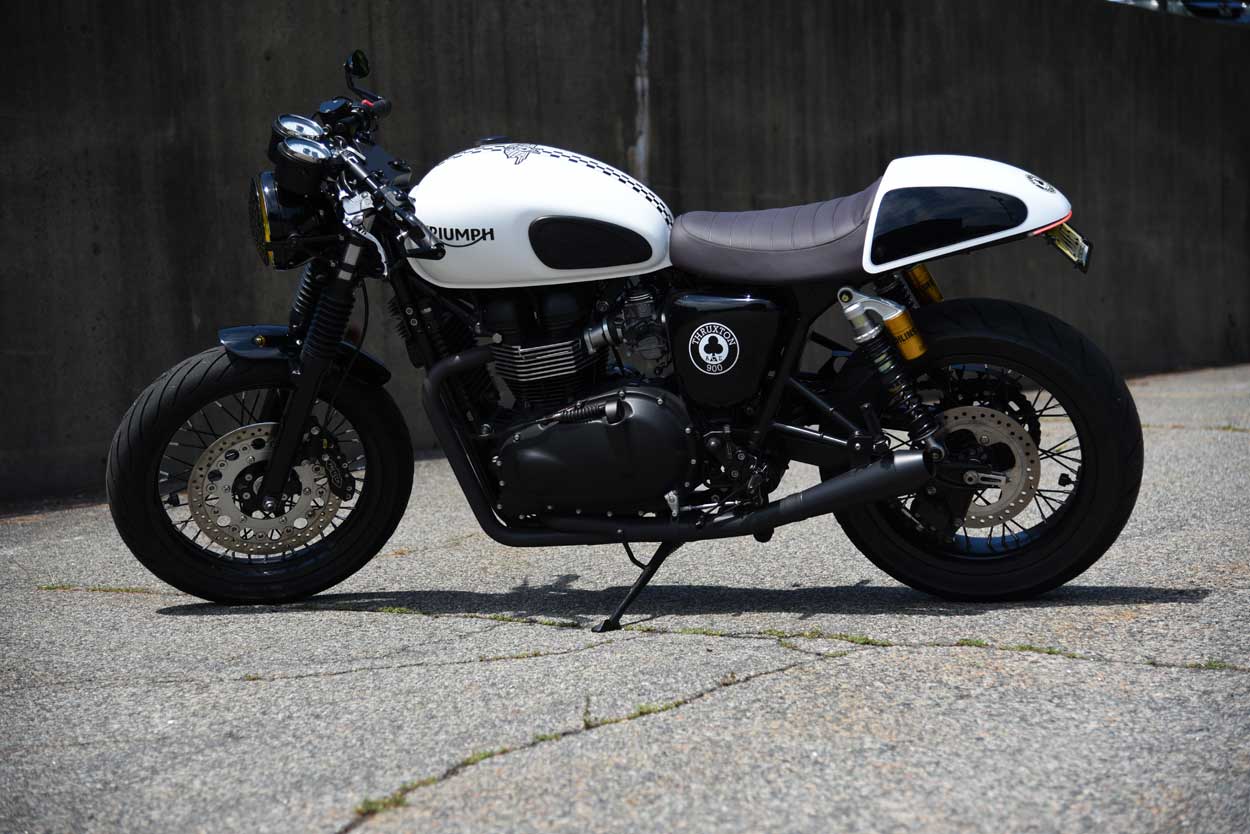 ‘Ace Black’ Custom Story
“I was clear on the aesthetic I wanted before starting. Monochrome and mean, classic, clean and lean, but cohesive and subtle enough that it looked like it came from the factory and with an attention to detail to keep you looking…It was also important to me that the bike would be a practical daily rider that went, stopped and handled through short tours and twisties like I felt it deserved to when it left the Triumph production line with the Ace Cafe badge!” 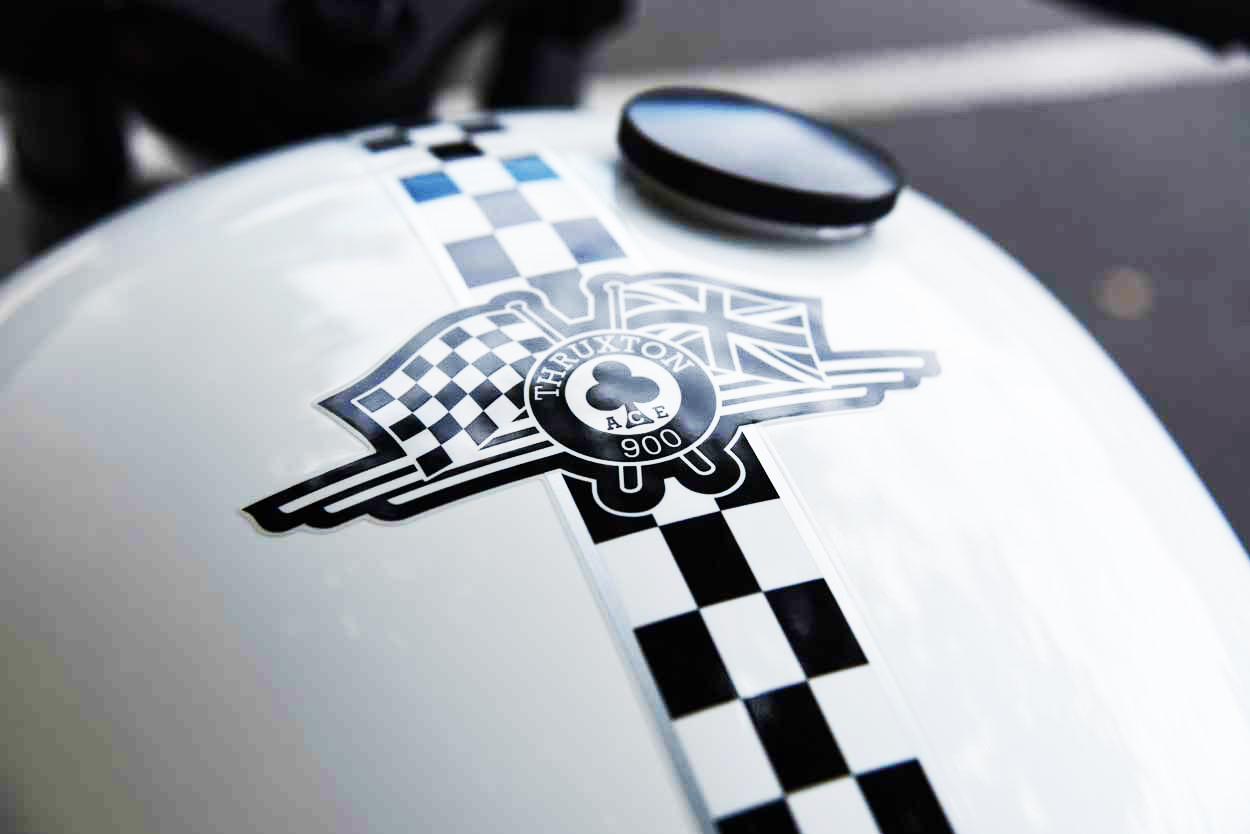 “Modest performance increases came courtesy of British Customs with their airbox eliminator kit, O2 sensor delete and a wicked-sounding blacked out 2-into-1 GP exhaust. Even with the most appropriate Triumph fuel map applied, the bike initially suffered from rough fueling, poor fuel economy and a snatchy initial throttle response, all of which were solved with a custom tune from Triumph Twin Power”. 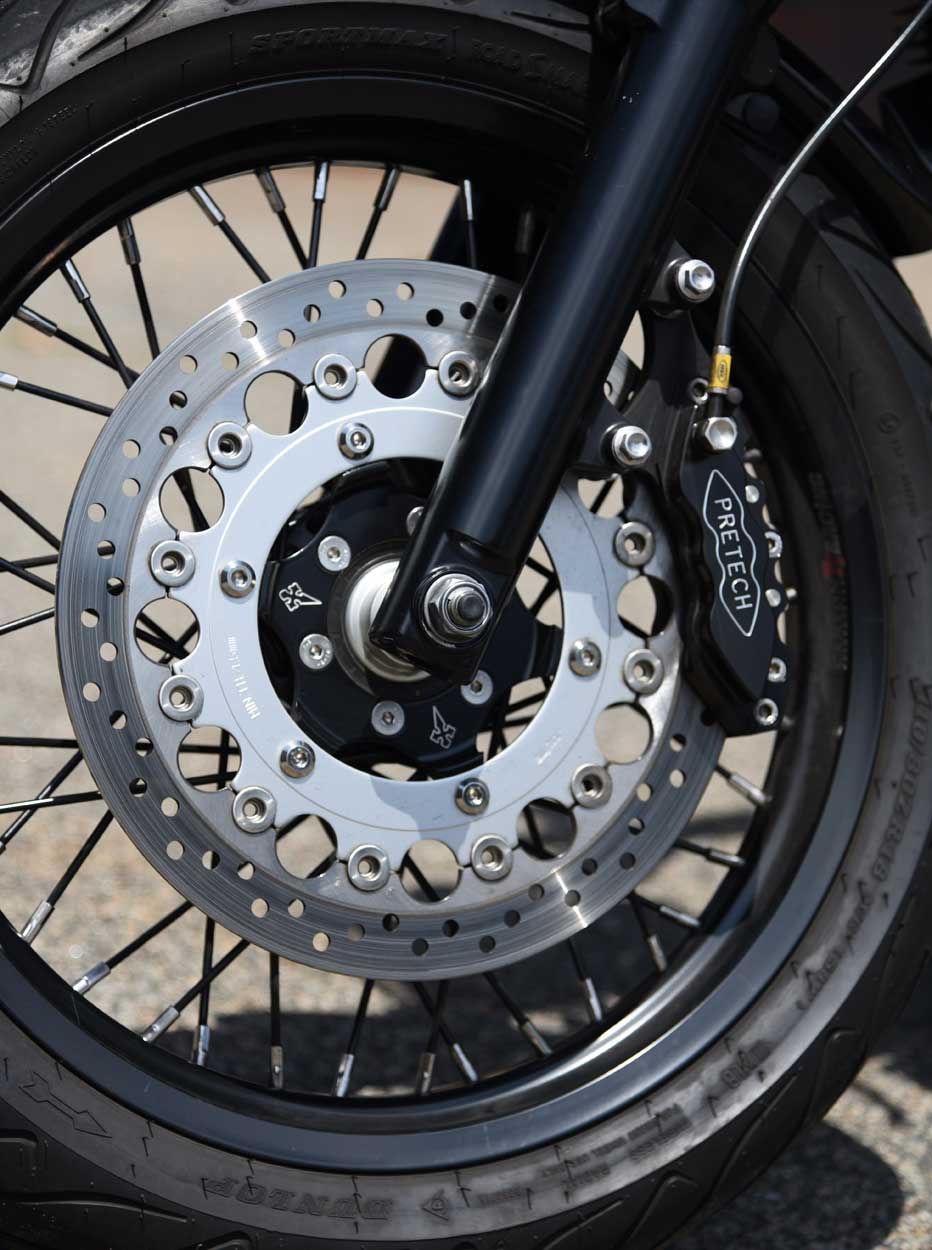 “Stopping is much-improved thanks to a Pretech 6-pot front calliper imported from the UK and HEL braided lines, in black, of course! The adjustability of the Joker Machine brake levers meant the standard reservoir could be utilised with the larger calliper without the added volume of fluid needing the front lever to be squeezed all the way to the bar”. 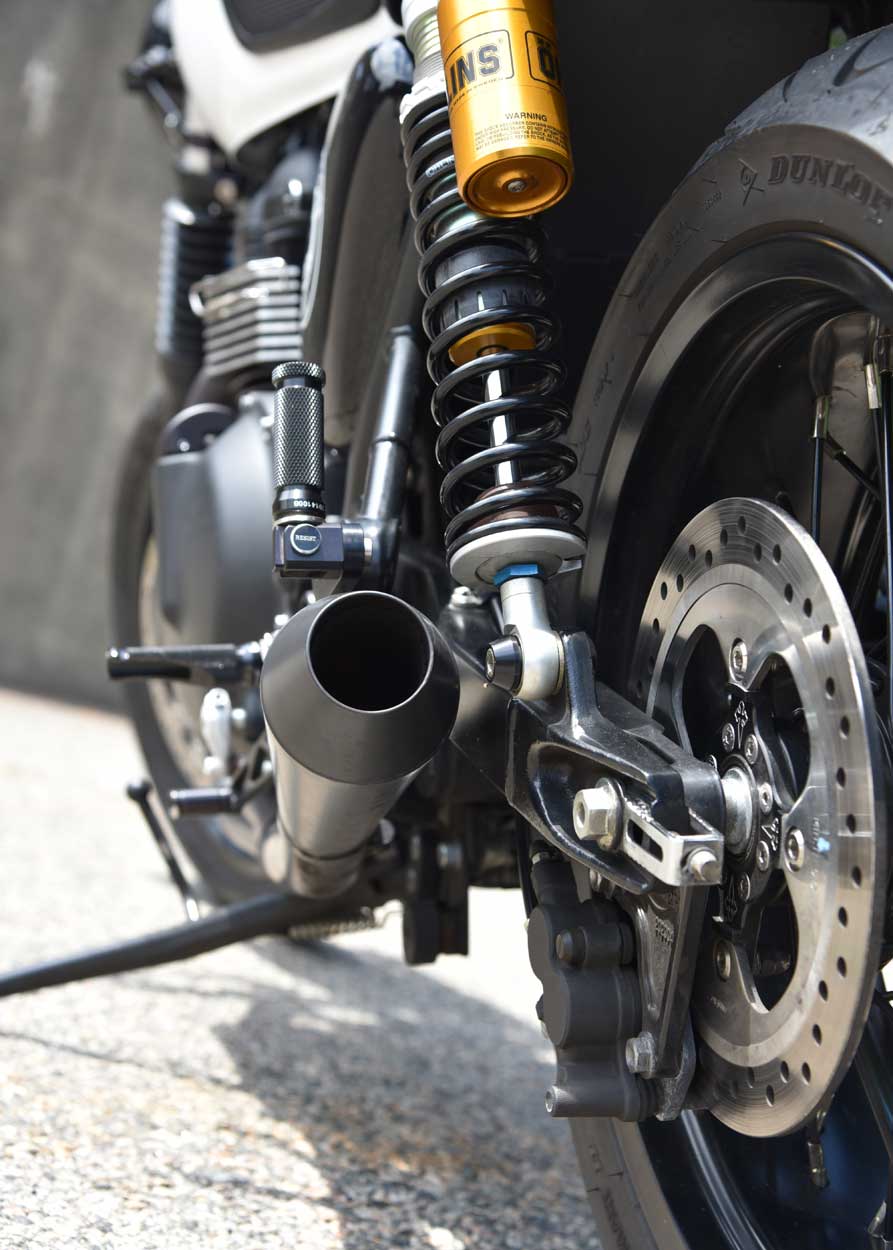 A 5.5” wide rear wearing 170 profile rubber gives a much meaner stance whilst an 18″ front wheel size was kept to maintain the classic look and keep the front fender and mount which acts as a brace. A trade-off in keeping the 18” front was the limited choice of rubber this combo brings, but a set of Dunlop Roadsmart II’s were fitted and have performed well. 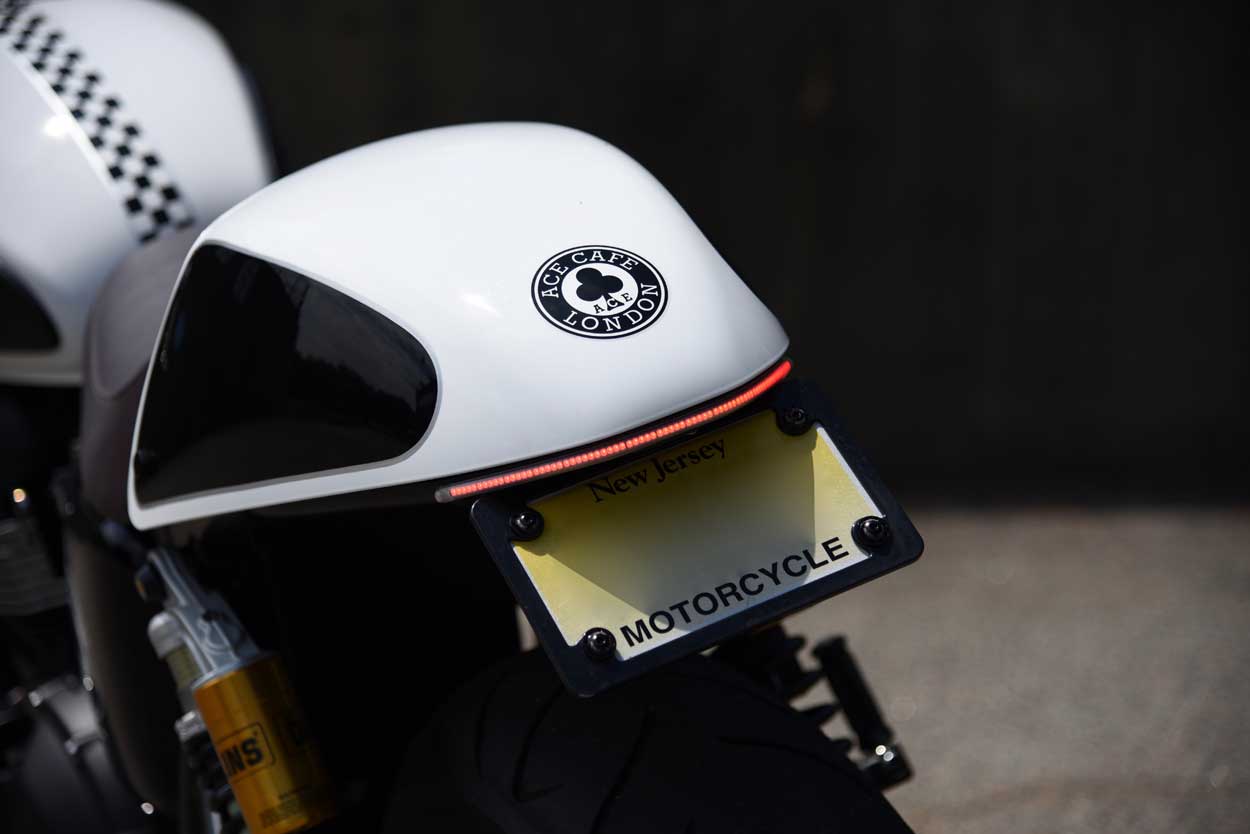 “The rear fender made way for an Analog Motorcycles 3T eliminator kit with integrated LED, and the front fender is a Motone shorty, powder coated black. The factory front fender mount has been slotted to lower it slightly and the M-gadget pin front turn signals are so tiny you can easily miss them – until they are switched on when they become blindingly bright!” 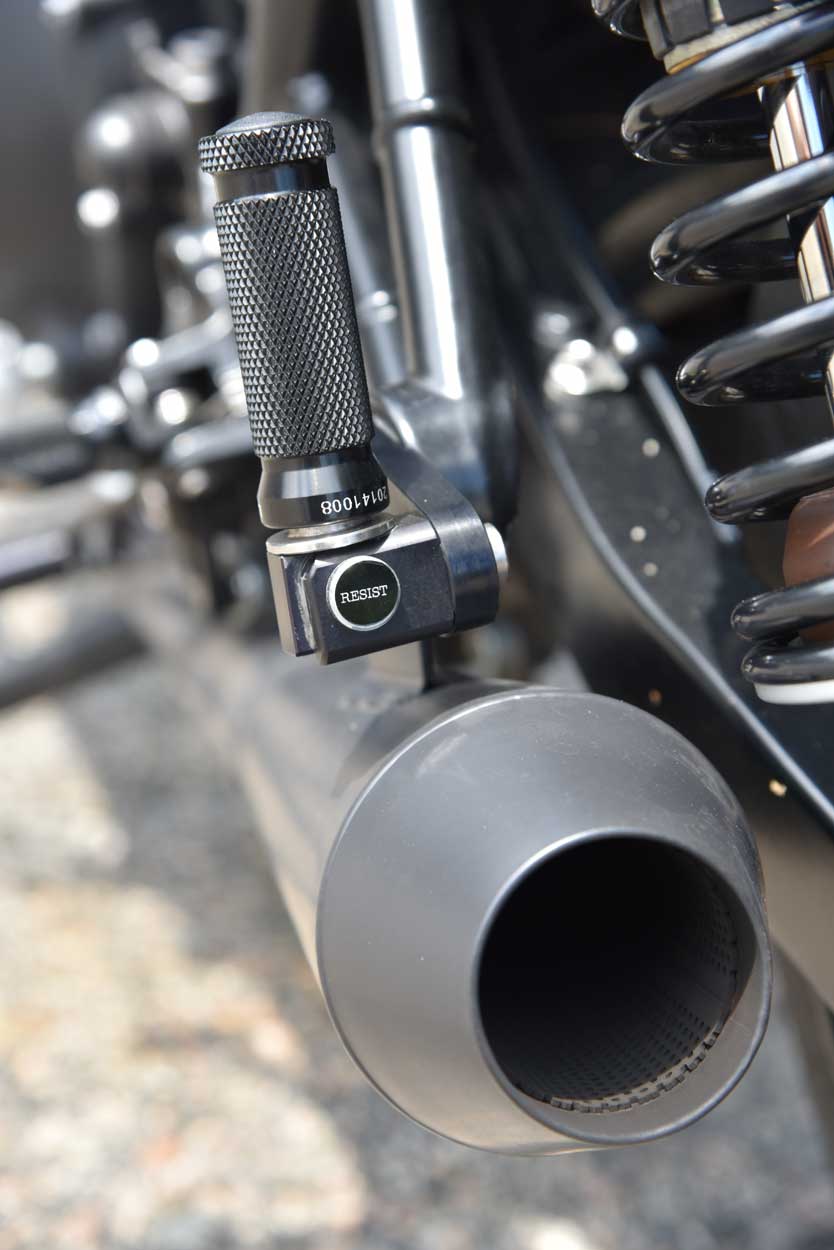 “Side pods have been drilled to accept small mesh inserts I found at a plumbing and electric supply company! Standard foot controls were replaced with lightweight black LSL items, and thanks to the 2-into-1 exhaust which leaves the chain-side prominently visible, you get a good view of where the heavy chain and sprocket guards have been ditched in favour of lighter drilled out British Customs alternatives. Mirrors are factory options from Triumph, designed for the Street Triple, modified to fit the different bar diameter”. 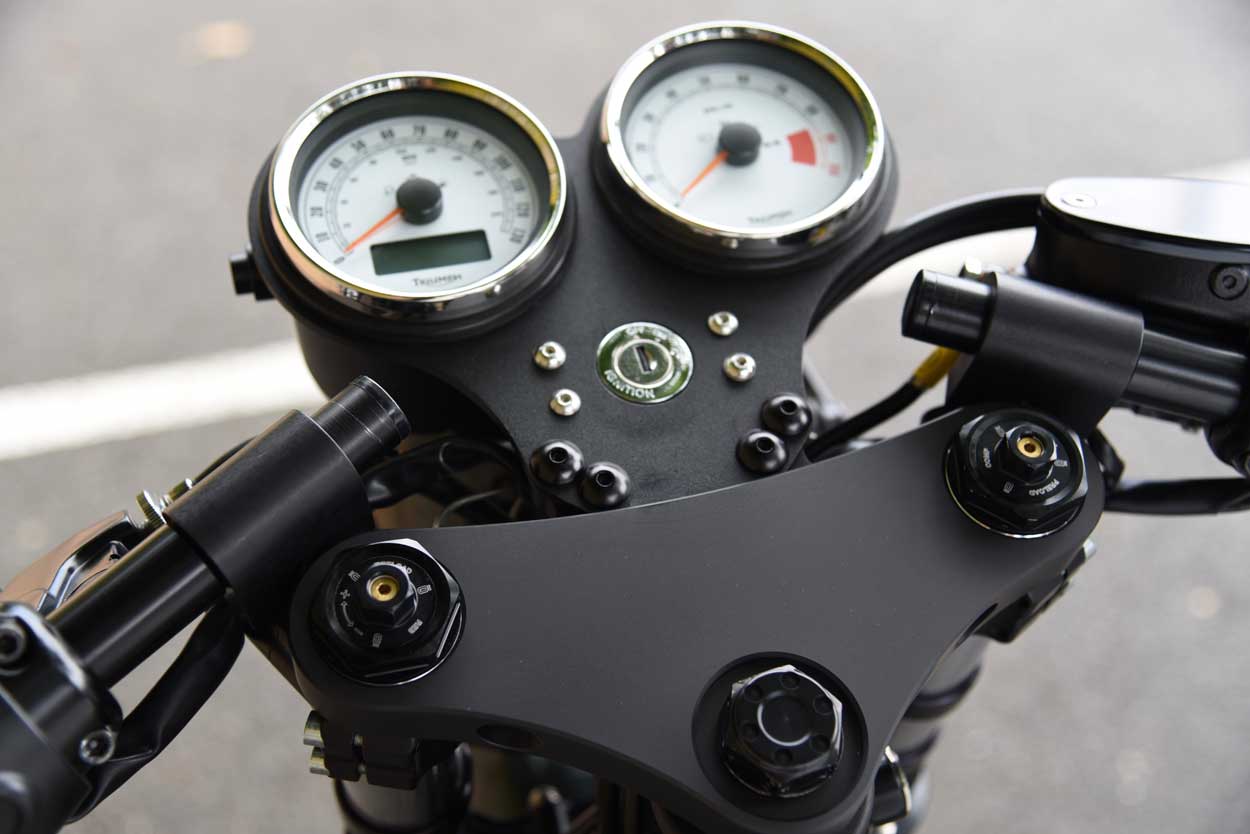 “After several iterations of controls, the ideal balance of comfort, adjustability and looks come from woodcraft clip-on’s with a 2” rise. A Cognito Moto top tree mated with British Customs lay-flat gauge panel keeps the cockpit clean and low, and the lowered headlamp has a bucket swapped from a Bonneville Bonchurch edition with a black powder coated rim and Tom bros guard. Improved lighting performance comes from an H4 LED kit sourced from Motodemic and mounted in a modified Hella lamp unit”. 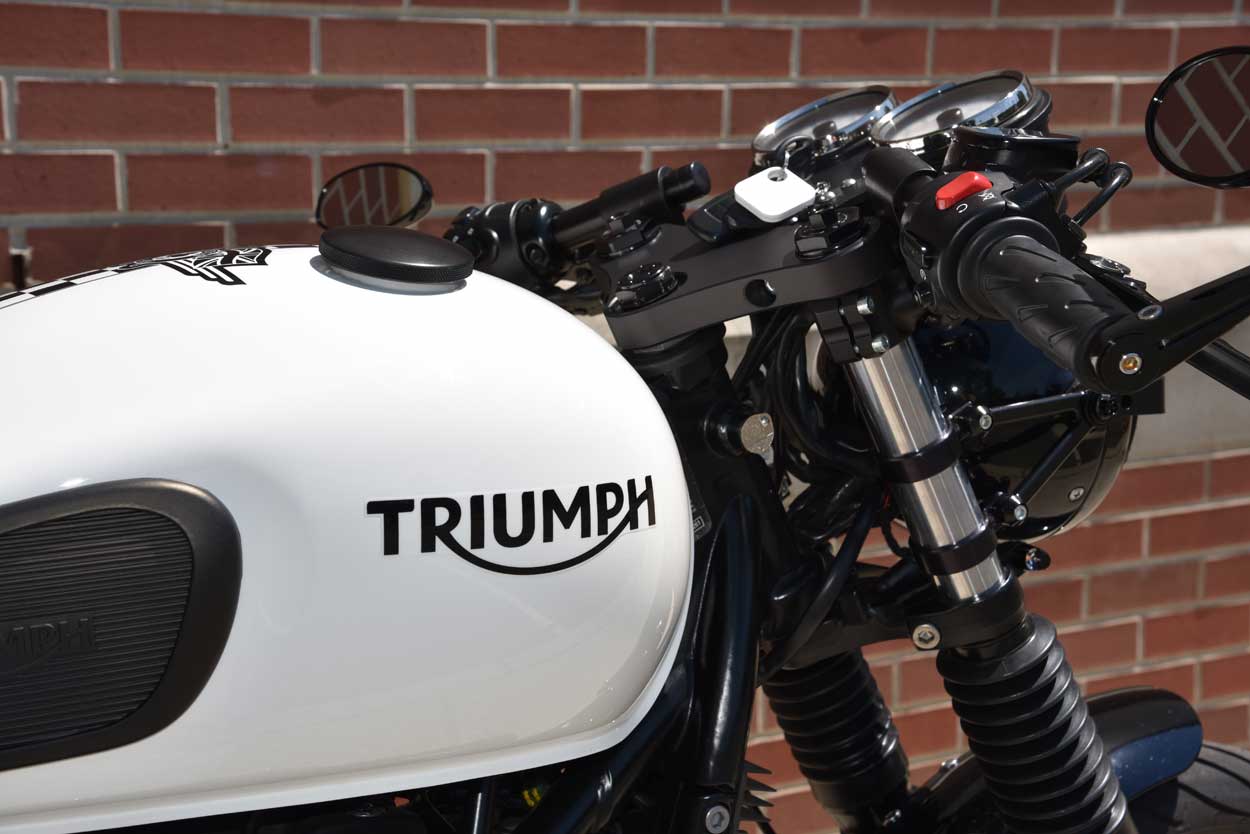 “Practical touches include 2” extensions for the rear LSL passenger pegs, Kriega Rack loops that I mounted ‘invisibly’ under the seat pan to accept their tail packs, and a Wilder designs sump guard”.

“Throughout the two years of customising, the bike has been used any time weather permits, racking up nearly 6,000 miles so far. Mostly hunting down twisties around NJ and NY state. Whilst there are admittedly still a few loose ends on the ‘todo’ list such as relocating the Denali mini horn to under the tank and fitting a LIPO battery to save weight, the bike now looks like the badge deserves, and with the combined mods and circa 40lb weight loss has more than enough performance for the road. Most importantly, it makes me smile every time I turn the key and stands out in any crowd”. 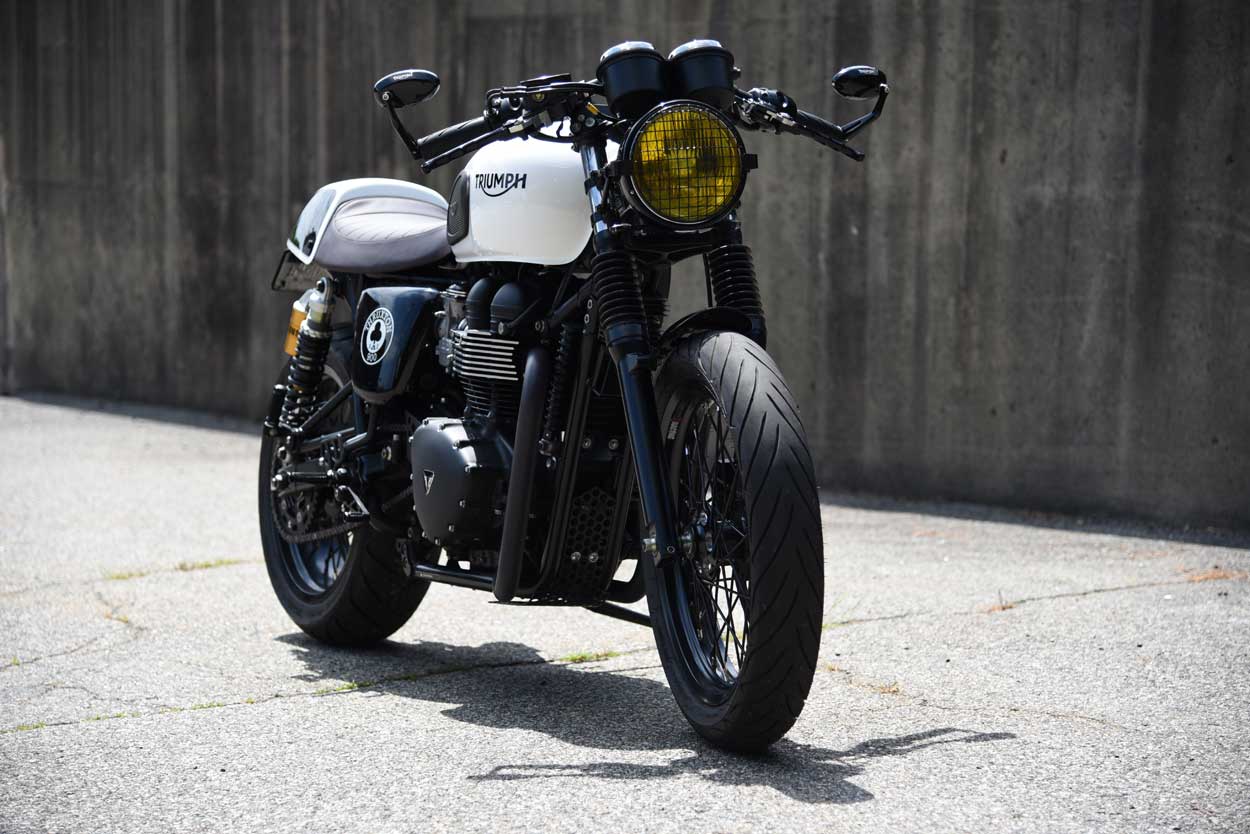 “So whilst the latest Thruxton R may win at the drag strip and on much of the spec sheet, I won’t be swapping the Ace Black any time soon!”