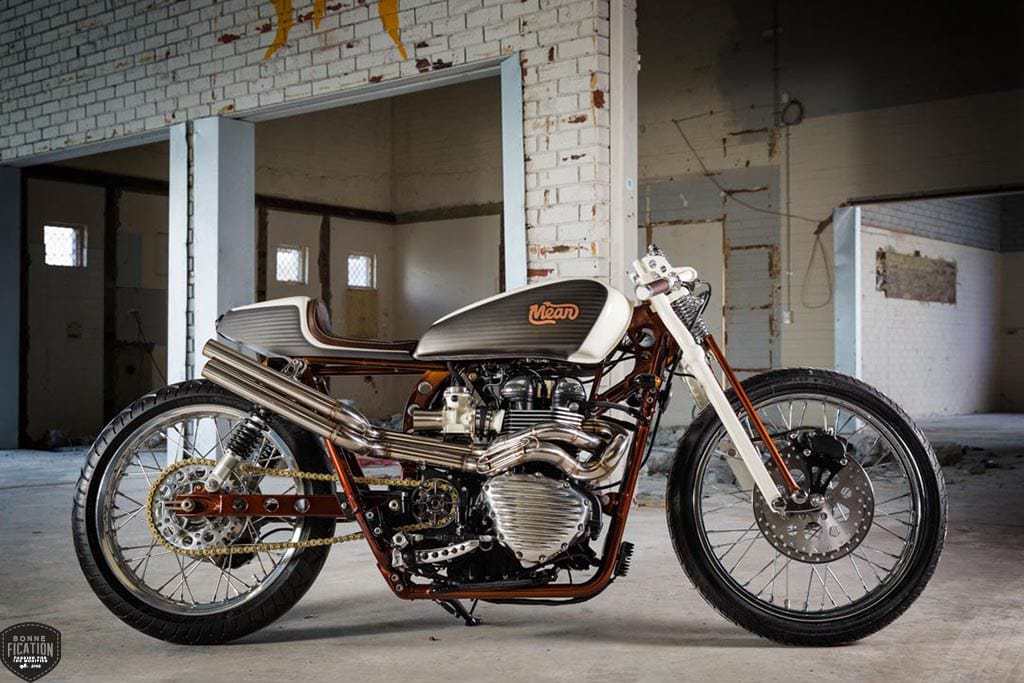 Wenley Andrews of Mean Machines Sydney, certainly knows how to build an exciting and imaginative Triumph Twin! – great news when you spend a good proportion of your week looking at them I can assure you. Alternative styles such as the ‘Board Tracker’ may not be hugely popular, or to everyones taste, but thank goodness for the relief they bring.

Now that Triumph have involved themselves in the custom scene by producing a range of ‘Inspiration Kits’, which mimicking the more popular styles, which can be fitted by a dealer or owner a like, the custom Triumph Twin is now more than ever at risk of becoming… dare I say it… main stream – the alternative custom motorcycle website, BikeExif recently wrote regarding custom triumph Twins….

“thanks to this overexposure, our eyes can tend to
gloss over as soon as “Tri” is read in a heading.” 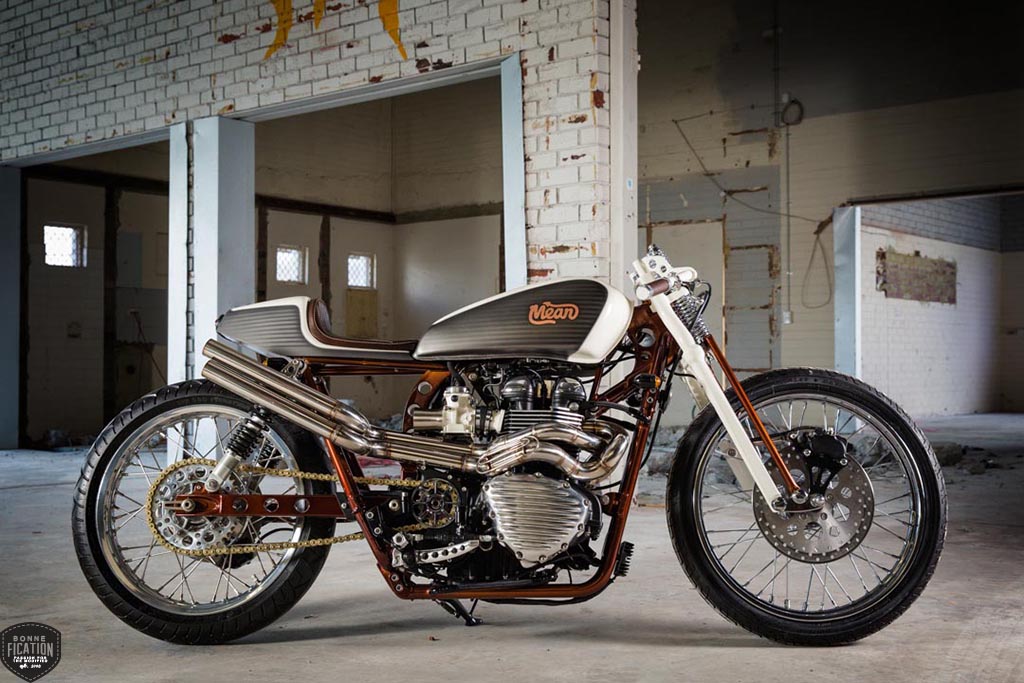 But it’s builds such as the Ruston ‘Forty‘,  Erico Motorsport “The Deadline” and Mean Machines Rumour Monger, which demonstrate that exciting, imaginative and far from main stream Triumph Twins are being built, builds which will easliy hold pride-of-place on custom motorcycle websites. Don’t get me wrong, I love the current styles and the work which many of the bike builders are doing the world over, but we can only write about a frame-loop, a mini speedo and knobbly tires with enthusiasm for so long. 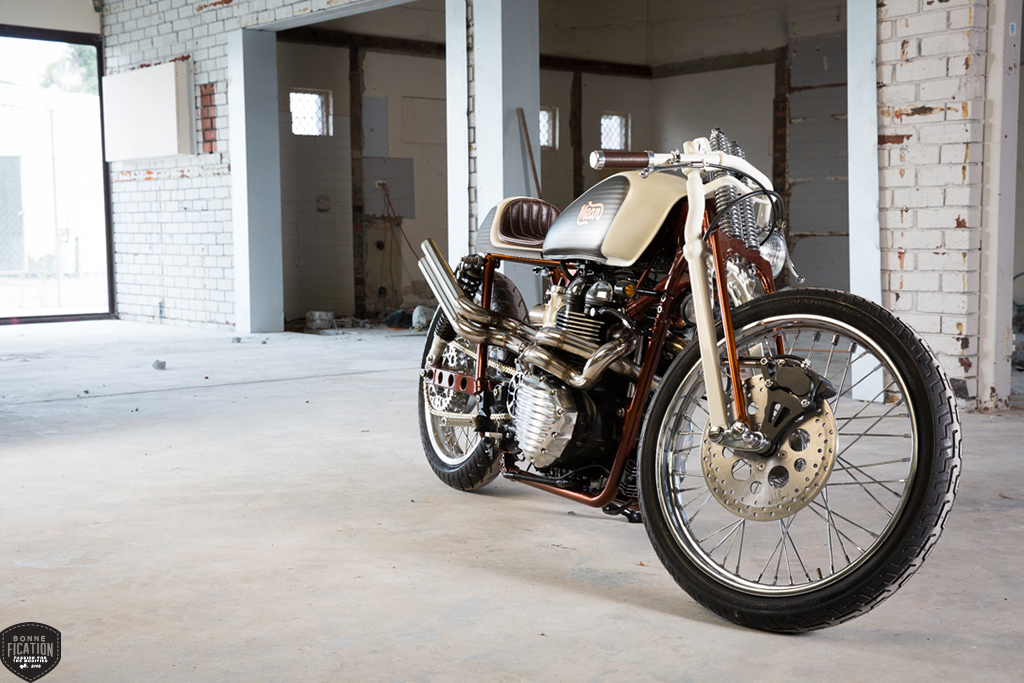 The Rumour Monger is based on a 2010, Mag Wheeled Bonneville, which as you can see, has undergone some serious frame modifications including; being shortened and blanked off, having all unwanted brackets, peg, exhausts and side cover mounts removed, before finally making the Bonneville frame appear to made from orange coloured swiss cheese – detailing which extends from the headstock to the swing-arm, and on to both the brake and gear shifters.

At the front are a set of Springer forks which Wenley picked up a few years previously from his local Harley Davidson store in Sydney. The springer forks were shortened five inches, re-enforced, and fitted with a custom head-stem and bearings to make it fit the Triumph frame. 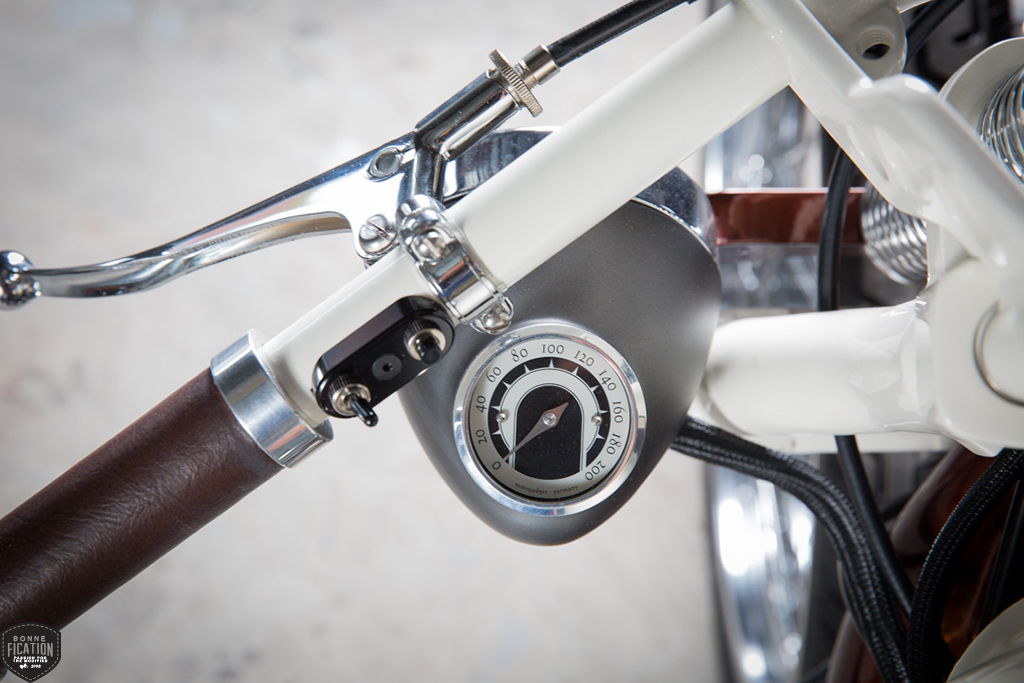 The forks have then being fitted with a set of custom board-tracker style bars, which feature micro switches and a vintage looking lever brake setup – a setup which uses a cable actuated brake lever connected to a hydraulic master cylinder hidden under the tank. The rear master cylinder has also been relocated running horizontally with the brake pedal under the front sprocket cover 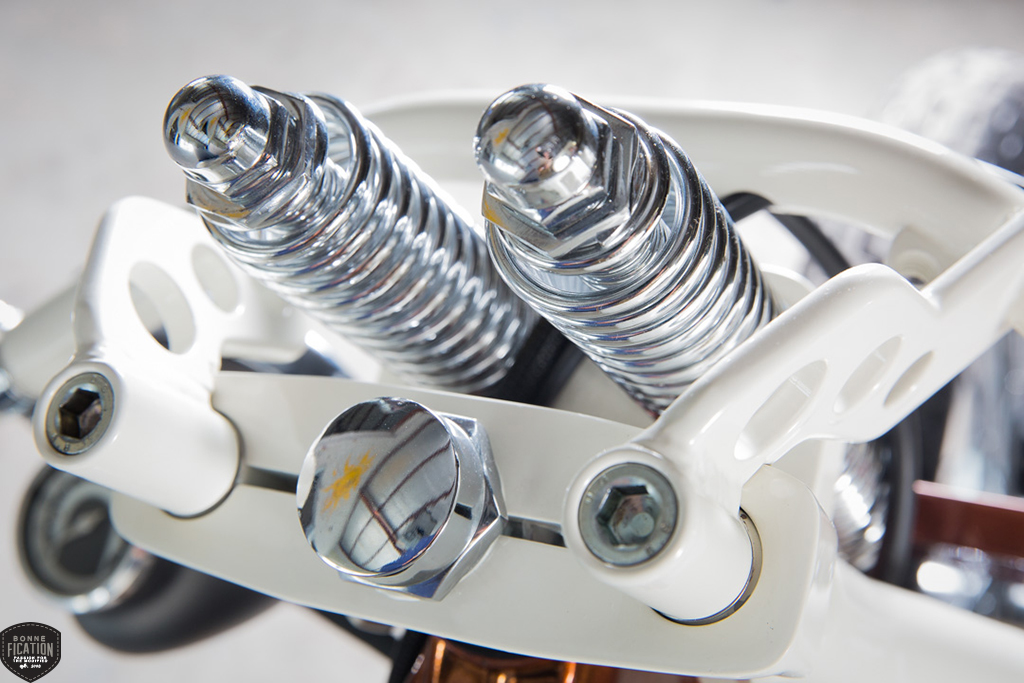 Like the forks, both the custom alloy Tank and seat cowl where both parts Wenley had lying about his new workshop, these were made to fit the Hinckley Twin before being painted beautifully in-house, with the seat later being fitted with a leather seat pad made by Beyond Trim. 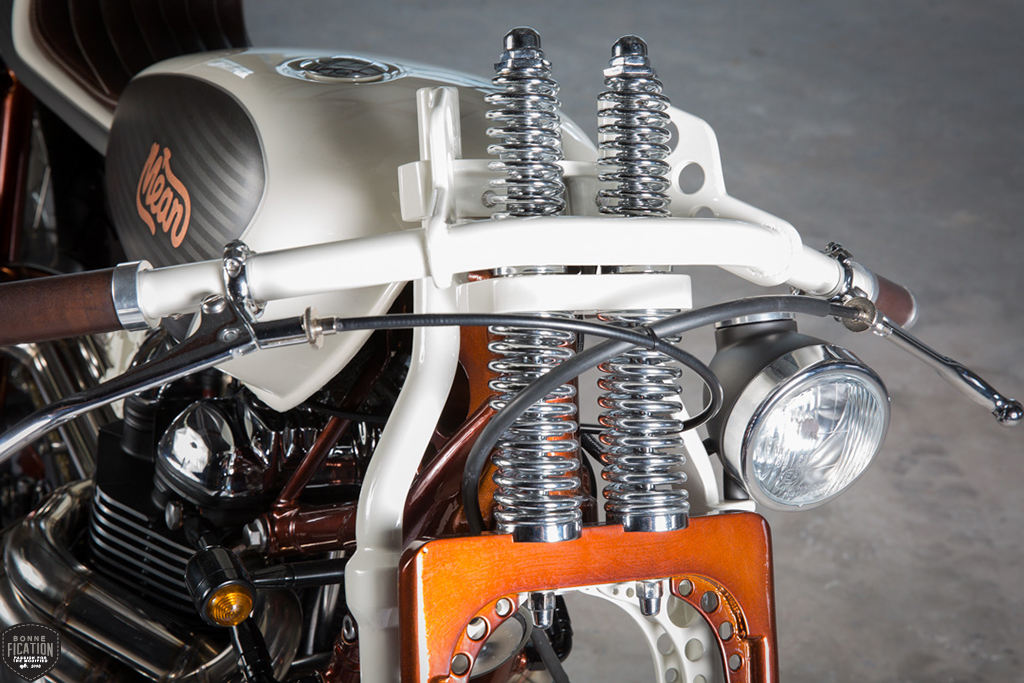 The headlight which now sits on the left hand side of the Triumph, just under the bars was originally destined to for a Vespa – this was adapted in-house to fit a Motogadget speedo and CanBus adapter. 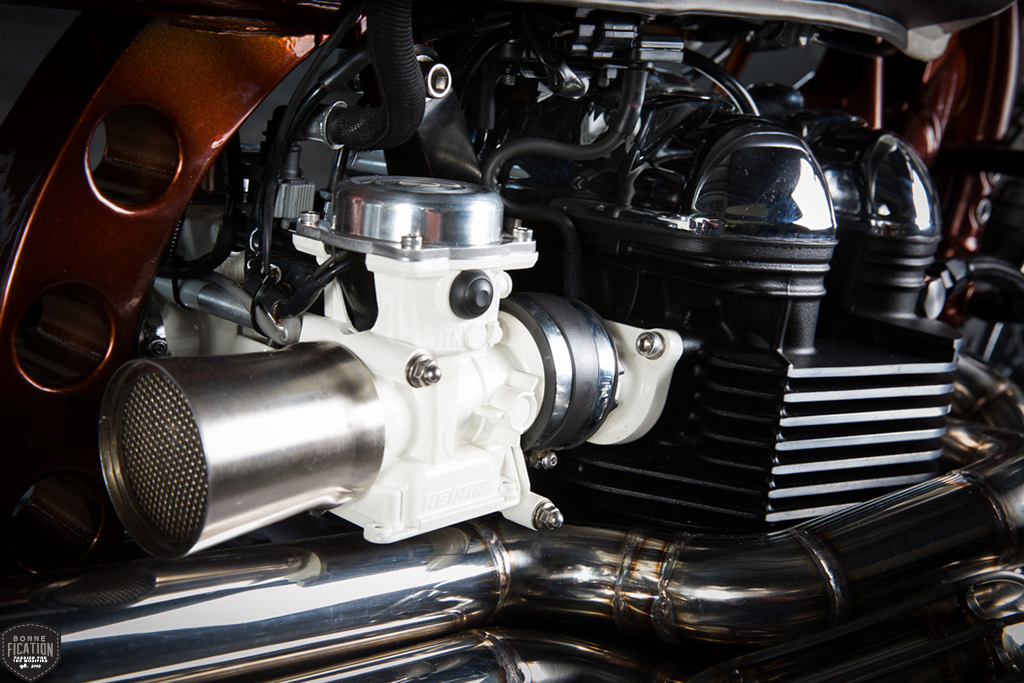 Other goodies from Motogadget include an M-Lock contact free digital ignition system ,which allows for the complete removal of the ignition system, this along with the battery has been relocated under the seat cowl, with the ignition button being just above the injectors, which now feature velocity stacks.

Finishing this incredible Board-Tracker build off are custom (length) Ikon shocks, relocation brackets galore, mini turn signals and a 19″ (rear) 21″ (front) wheels combo. The custom 2>2 exhausts was made from polished stainless steel, a system which required the removal of the fuel injector float bowl to make the pipes follow the desired contour of the bike. The detail on this build are amazing and the supplied images are well worth taking a closer look at. 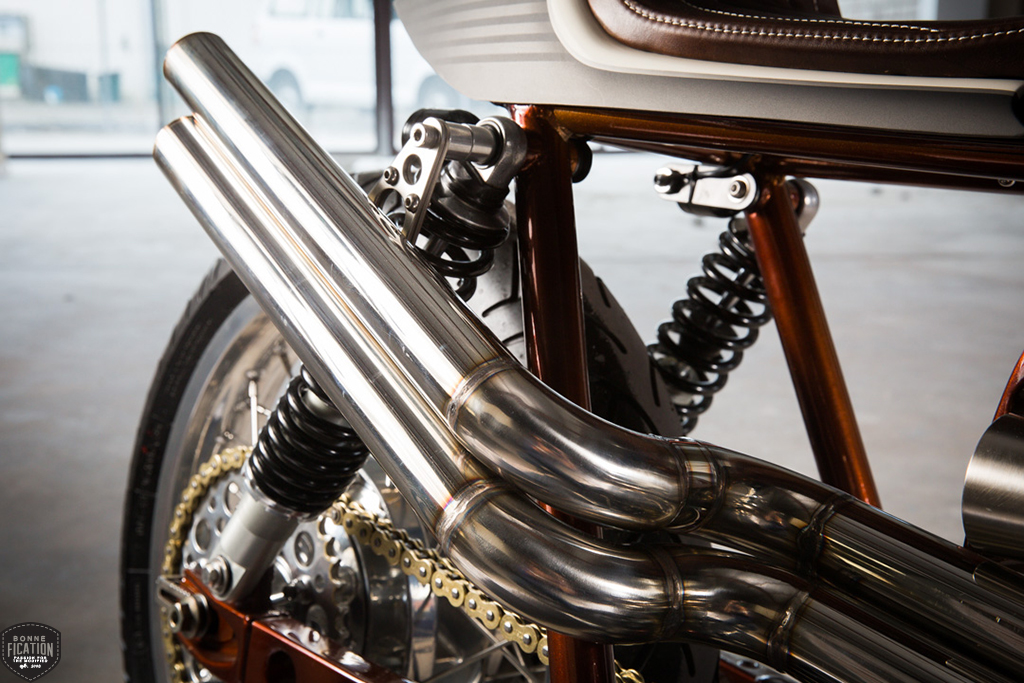 I hope it’s no coincidence that we have seen two Triumph Twin Board-Tracker builds in such a short time, and I’m hoping thats bikes like those by Mean Machines and Rustom just might herald in a new style of custom Triumph Twins. Also with the release of the Thruxton and Thruxton R, a few more Cafe Racer builds would receive a very warm welcome too.