We feature plenty of big-name professionally built custom Triumph Twins here on Bonnefication, beautiful builds submitted by pro builders for customers the world over. However, we want to see more customs submitted by the owner and importantly the rider of the finished machine.

We want to see custom Triumph Twins either built by you, for you. Or calibrations between you and a pro builder.  It just has to be your ride, your pride, and joy.

Bonnefication recently asked members of the Modified Triumph Classic Twin Group on Facebook (a medium which many of you hate, but it does have its virtues) to submit their builds to be featured here on Bonnefication.

One such build was that of product designer Pawel Janusz Wisniewski and his air-cooled  Triumph Scrambler. Pawel is no stranger to building custom motorcycles having built the ‘Bluebird‘; but this Triumph Scrambler is Pawel’s everyday ride.

“I bought the Scrambler not for the looks, but because of its sound. A few years earlier I heard the Scrambler with a custom exhaust on the street, and I fell in love with that sound.  Neither sounded like an old biplane, nor a vintage racing machine, but something rather in between them. Had to have it”. 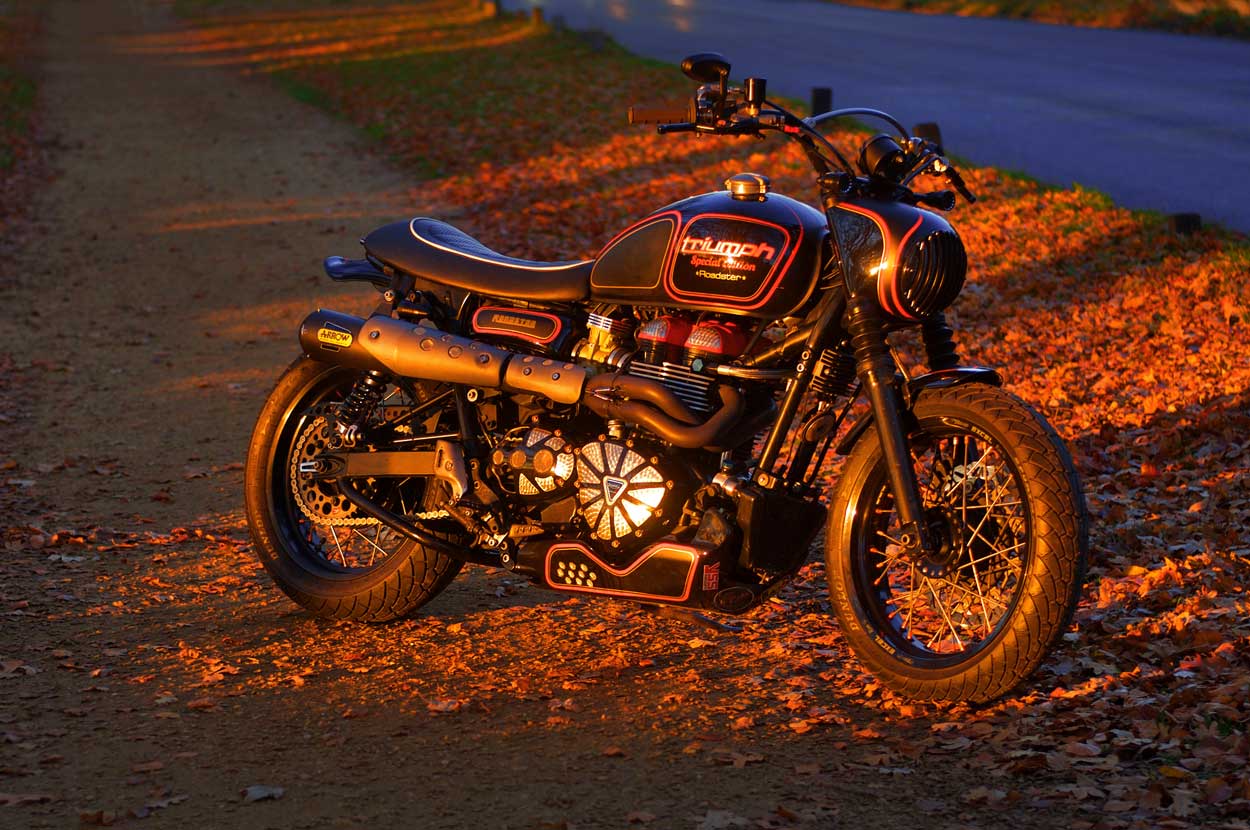 “First three years used it as a workhorse and ridden it all year every day. In that time instead of envisioning the bike, I made a list of visual and performance things that were downright annoying, like the too long seat, too long rear mudguard, handlebars also the headlight too small, lack of power, wheels too thin, terrible rear shocks, and so on”. 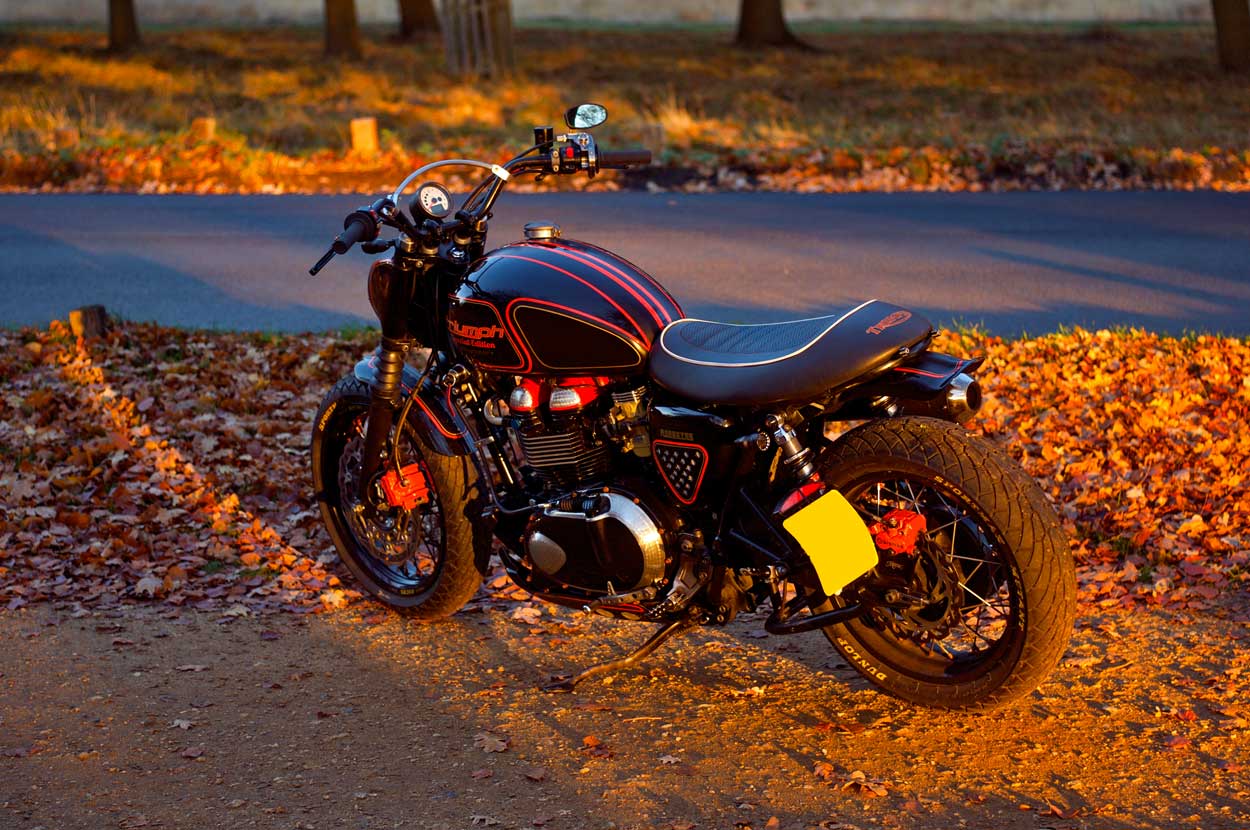 “The first time it was modified, I didn’t manage to change all from the list. It was the second time around”. 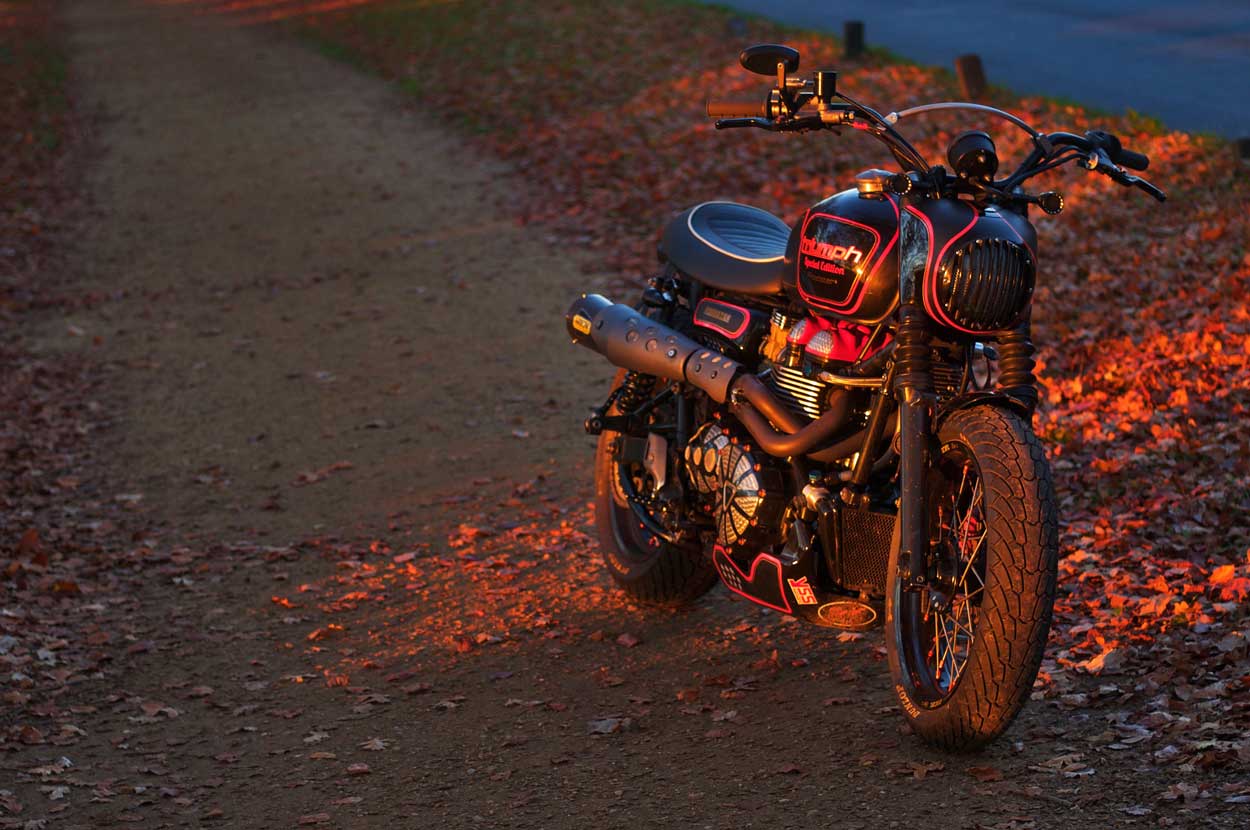 “I got majority done. I have to say that was a rather strange build. Unlike the “Bluebird”, my last custom bike. It sort of escalated. Instead of chasing the designed vision from the start”. 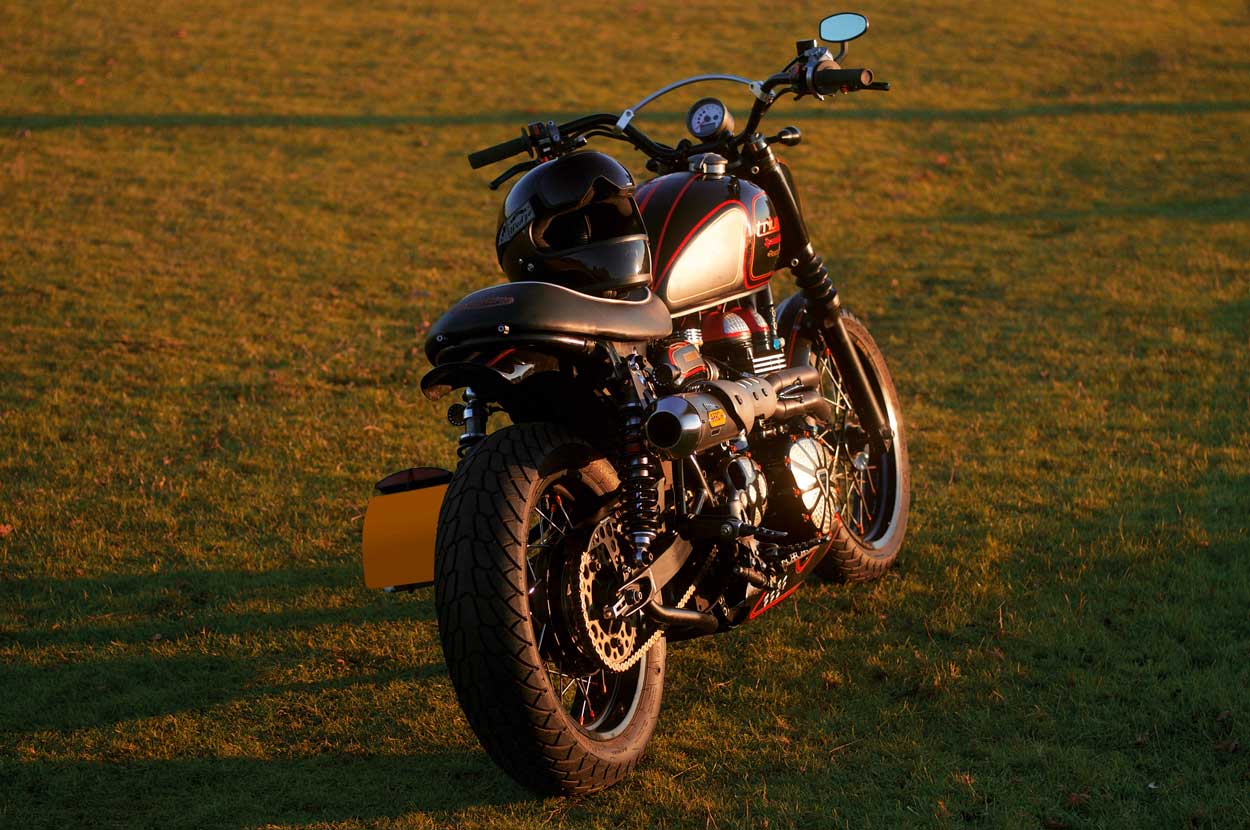 “I didn’t want to build it in clear genre category but to clash two together, or two periods, two schools: new and old, like We did create Lamborghini Ratrod with my friend Jans Slapins, who co-designed, and 3d printed the headlight cover on this bike”. 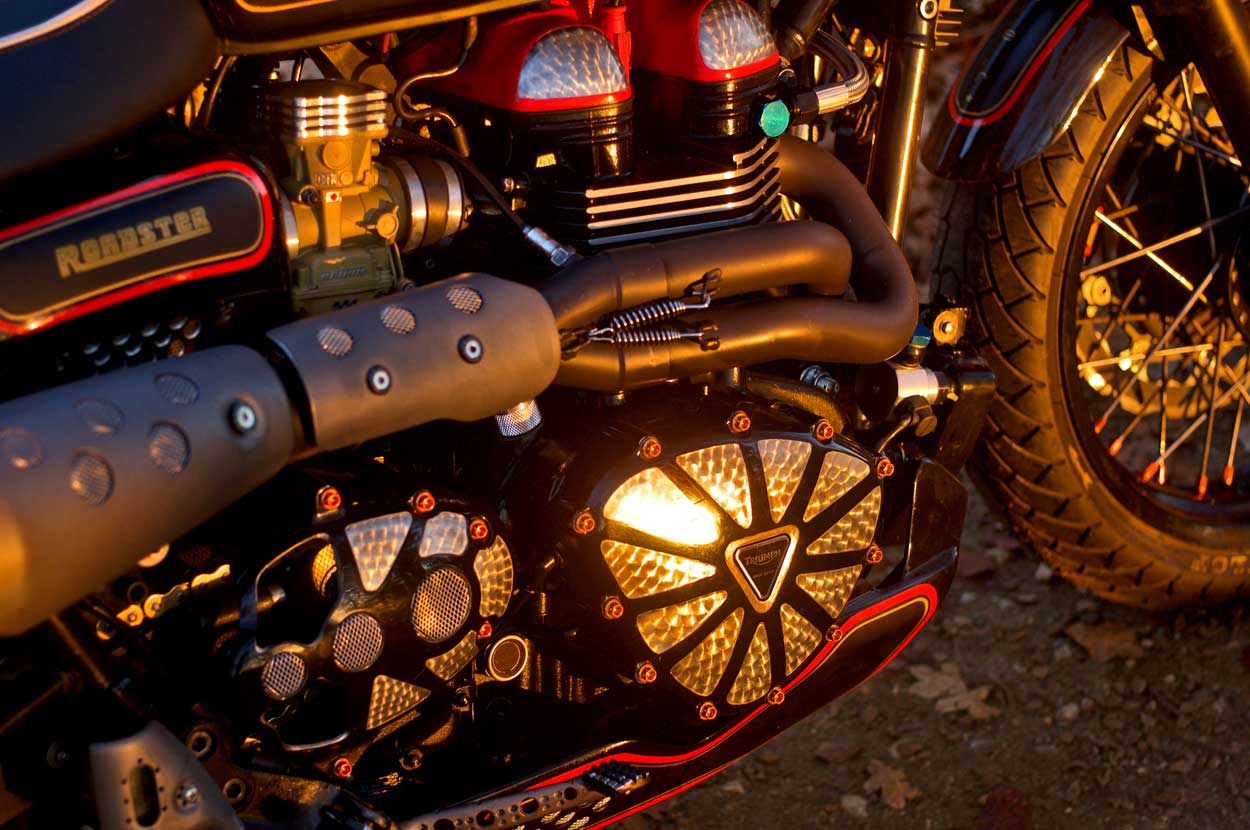 “The bike is a true testament of what can you do on a really low budget too! The whole build was possible thanks to Steve Hallam. Genius artist electrician, fabricator, and overall motorcycle doctor, you know, a guy to go to”.” 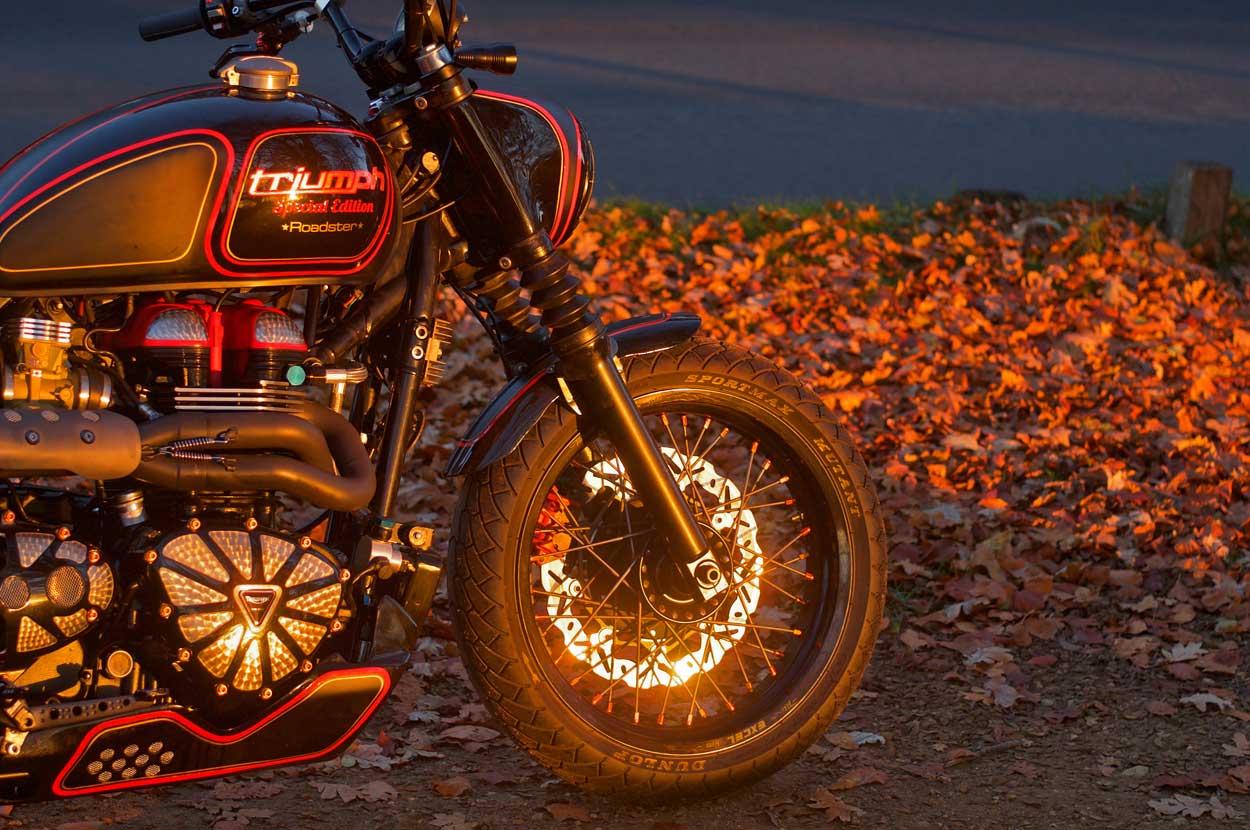 “We became friends during the “Bluebird”, our last build. This time We’ve built the bike with a bit of my involvement, as Steve took the role of a great teacher. So, a great, great deal of kudos to that Guy!”. 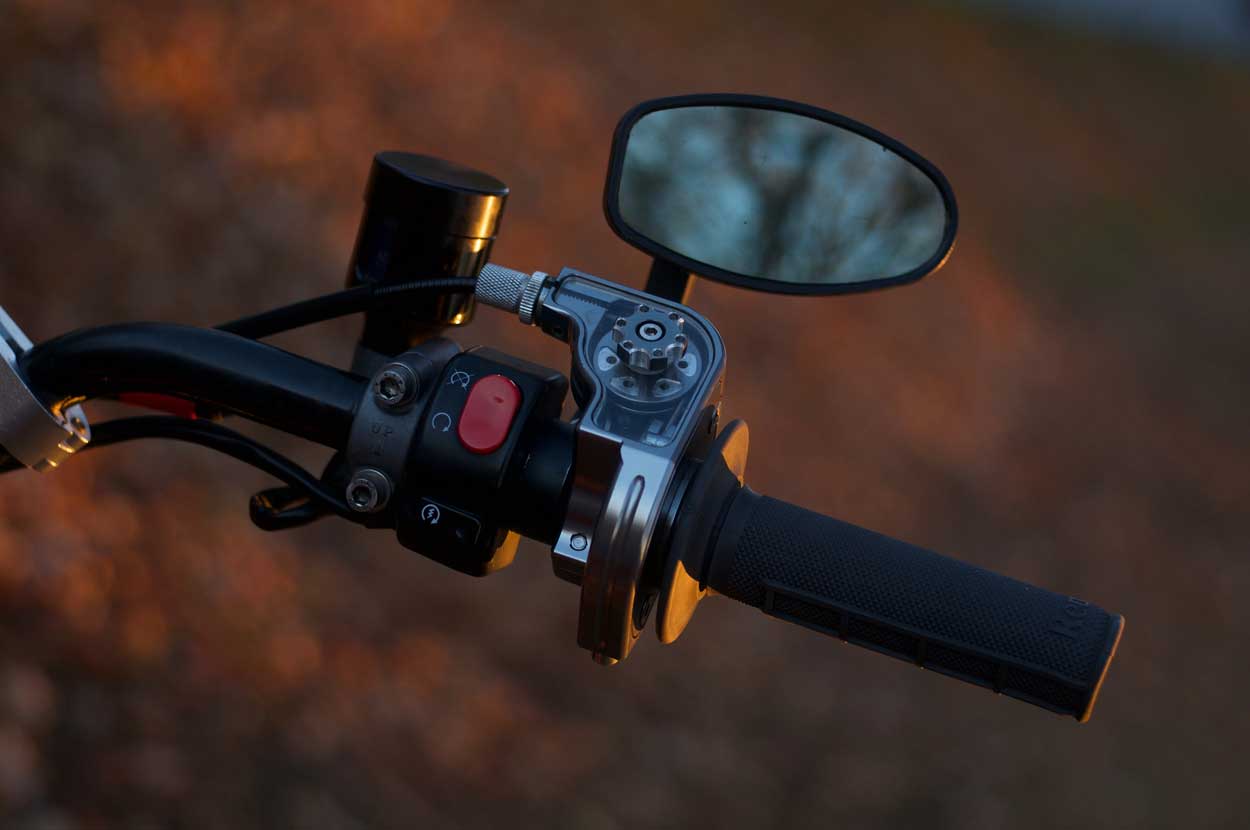 “Generally, it was a low budget build. Everything sourced either second hand, sale, or cheapest possible. Whatever I couldn’t afford like Speed Merchant finned covers or JVB Moto headlight cover I made my own. Finally greatest thanks to my wife, for support, and help”. (So important – Ed.)

Why not submit your bike here