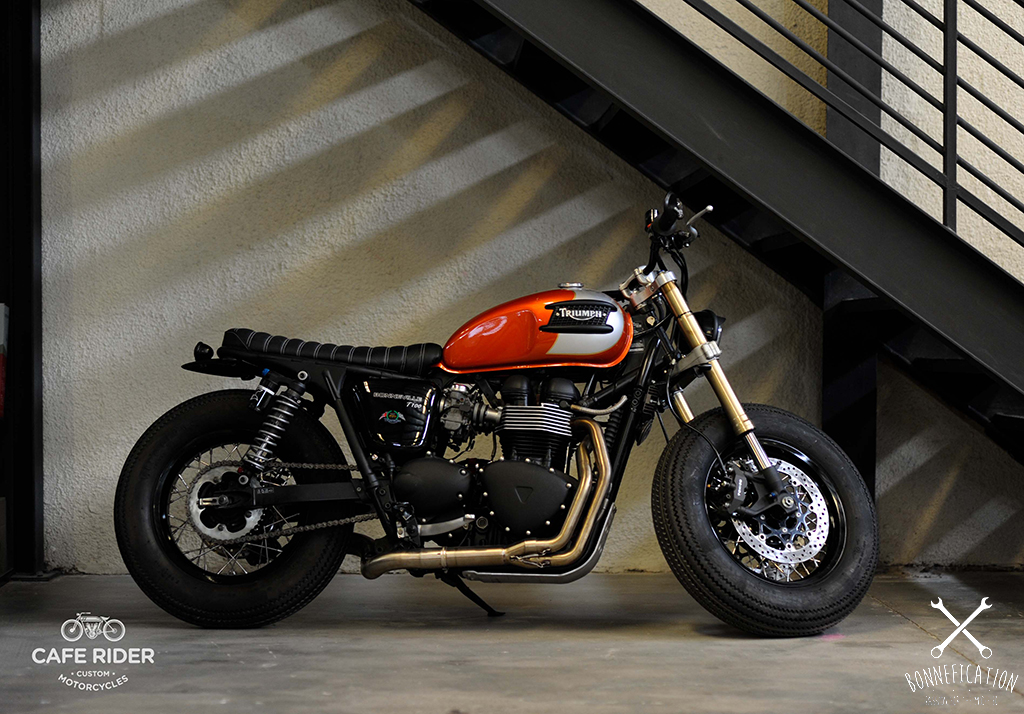 Many of you must of seen or be aware of the 1983 movie Christine, an action movie about a red-and-white 1958 Plymouth Fury –  A car which could be described as bad luck for both its owners and just about anybody else who came in contact with it. Move forward to 2002, which was Triumph centennial year and to celebrate the company was to produced a limited number of Bonneville T100s in Lucifer Orange & Silver. But in March of 2002 disaster hit the main factory burning it to the ground, which limited the total run of the centennial T100 to around 500 unit. 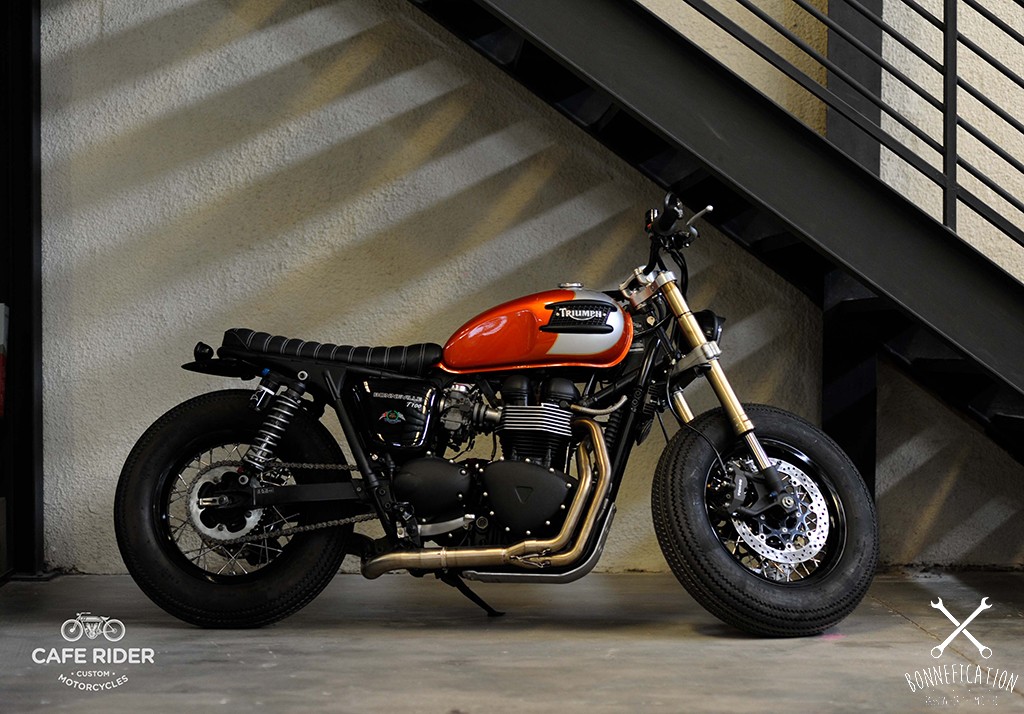 Move forward to today and a good friend of Murtaza Moulvi of the Dubai baed Cafe Rider Custom Motorcycles wanted him to build a custom bike based on a Triumph Twin. When the bike was dropped it became apparent that this was no ordinary T100, but in fact was one of the few 100th Anniversary editions and a 2002 model at that, something which the current owner was unaware of at the time – He had even asked for the Lucifer Orange & Silver paintwork to be changed to cool Matt Black. With this new information in hand, plans were changed and the original paint scheme was to be kept. 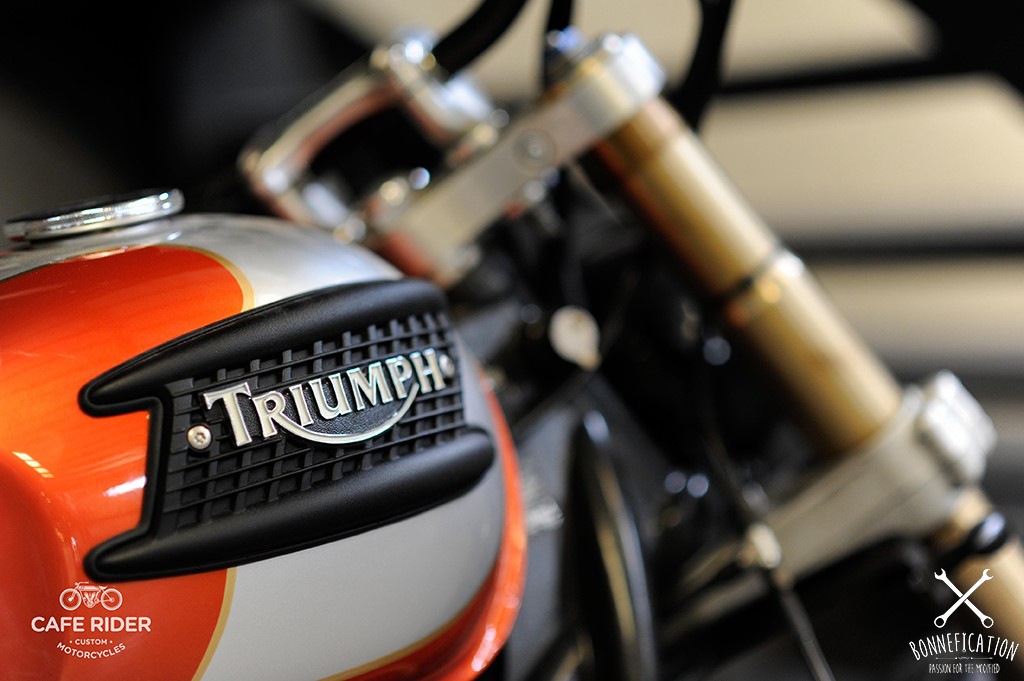 The guys set to work on the bike cutting the back end, removing the peg mount sand adding a frame loop. A custom mudguards which feature the popular Bates style LED taillight was added along with a new custom seat which was covered in black leather with white stitching. 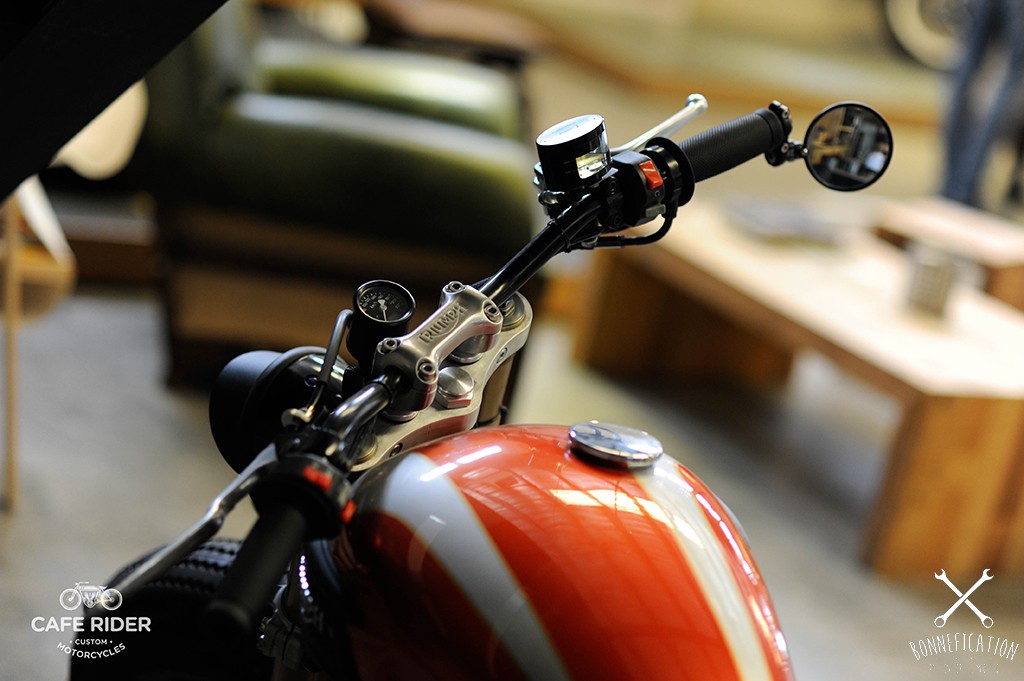 Front and rear suspension has been upgraded to a GSXR inverted front end with custom yokes and Fox shocks at the rear. The stock wheels have been replaced with 16″ items which have then been fitted with the retro Firestone Deluxe Tires. The stock bars are gone being swopped for Tracker bars giving the bike a much more comfortable riding position. Other details upfront include a nice compact Electronic Speedo. 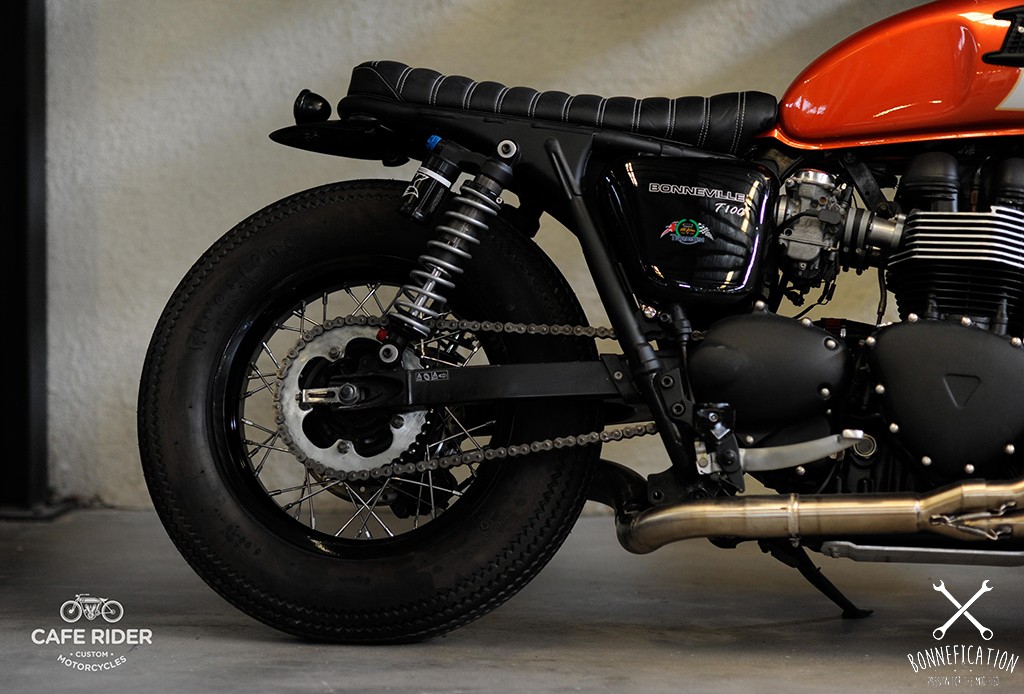 The guys at Cafe Rider Custom Motorcycles also do a range of goodies in their Dubai store including coffee and riding gear, they also do a few accessories for the Triumph Twin, which are features on this build, these include a Custom made two in one Cafe Rider cross over exhaust, Cafe Rider custom made battery removal box, side mount license plate, 5 mm skid plate and a the featured leather seat, all of which look good to me. Though at time of writing I can’t see them on their website.

The finished bike is named ‘Morning Star’ after it owner who loves a very early morning motorcycle or car adventures and it looks great in its original Lucifer paint scheme – which it nearly didn’t. On a test ride Murtaza was unfortunate enough to of taken a tumble. There was minimal damage to the T100 and that all important tank with its Lucifer Orange & Silver was unscathed, with the real damage being to Murtaza pride. (one word..Christine!!!!)