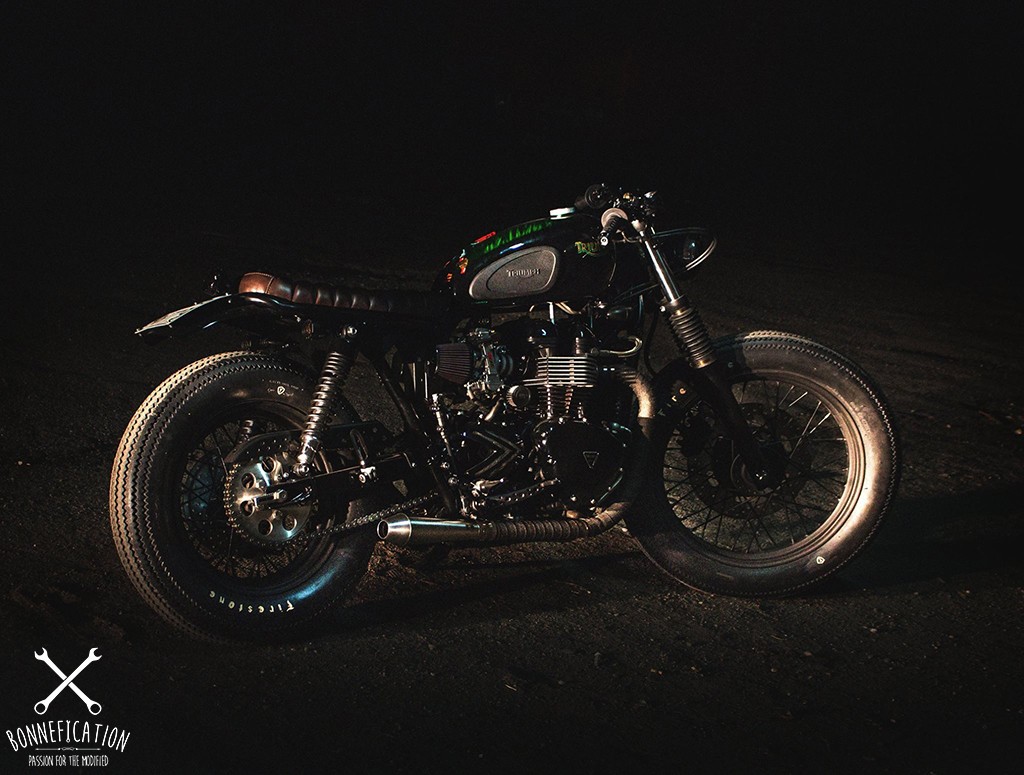 I love Italy and Tuscany in particular, there is something about the region that I and we Brits in general can’t get enough of. Which is no surprise, the people are warm and so is the climate. Tuscany is also where Iuri Castaldi of Iron Pirate Garage is based, the builder of this rather nice ‘Brat Styled‘ Triumph Twin. Iron Pirate Garage is what we brits call a ‘one man band‘ or in this case ‘a one pirate ship‘, meaning Iuri works alone doing much of the work and fabricating himself. 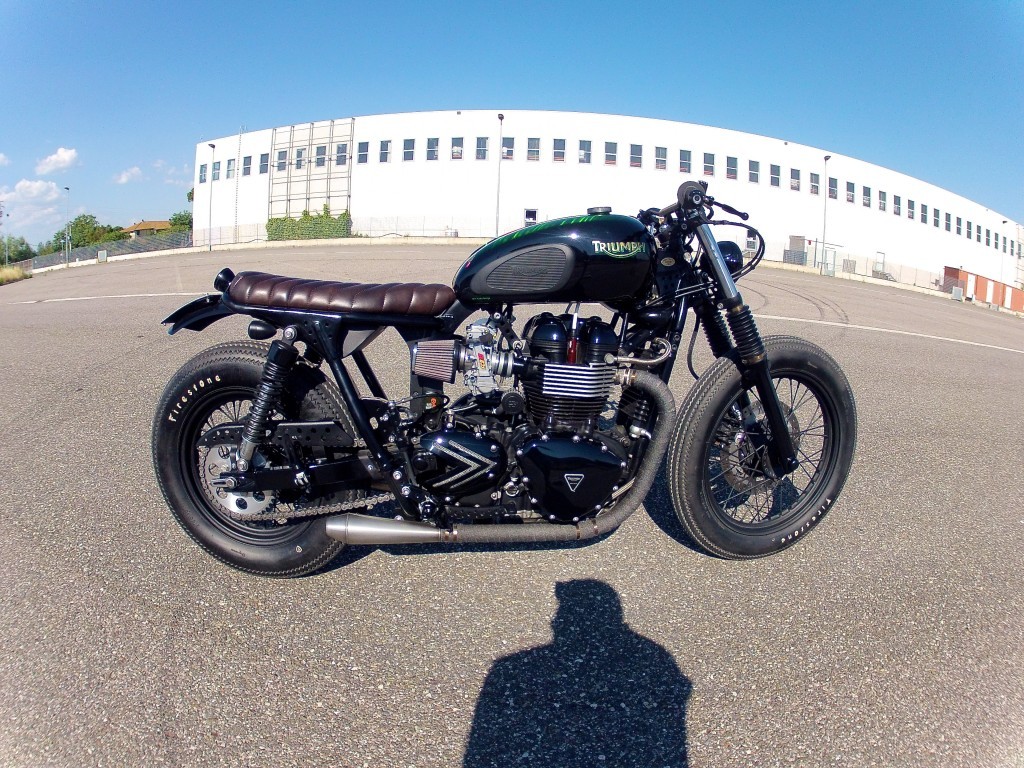 The Triumph was a commission by a friend of Iuri’s who owns a local energy distribution company, the friend wanted the bike to have an ‘old style clean and classical look,‘ but with reliability and most importantly a bit of attitude! – Which is exactly what this Twin has. 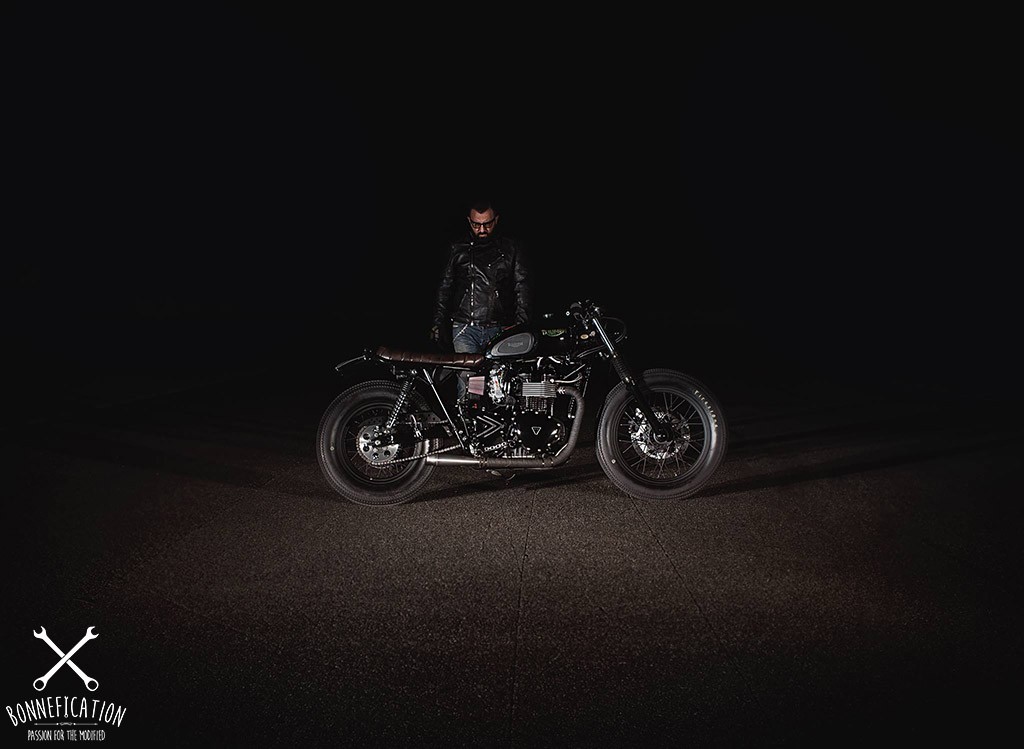 Iuri started with a 2005 T100 which was chopped and fitted with a custom seat, with the base being made in-house and then covered in leather by a local friend. The super sexy petrol tank, which is one of the key features on this build was original made for a classic Triumph TR6, but has been modified to fit the Hinckley frame, a tank which now looks stunning in its new home. 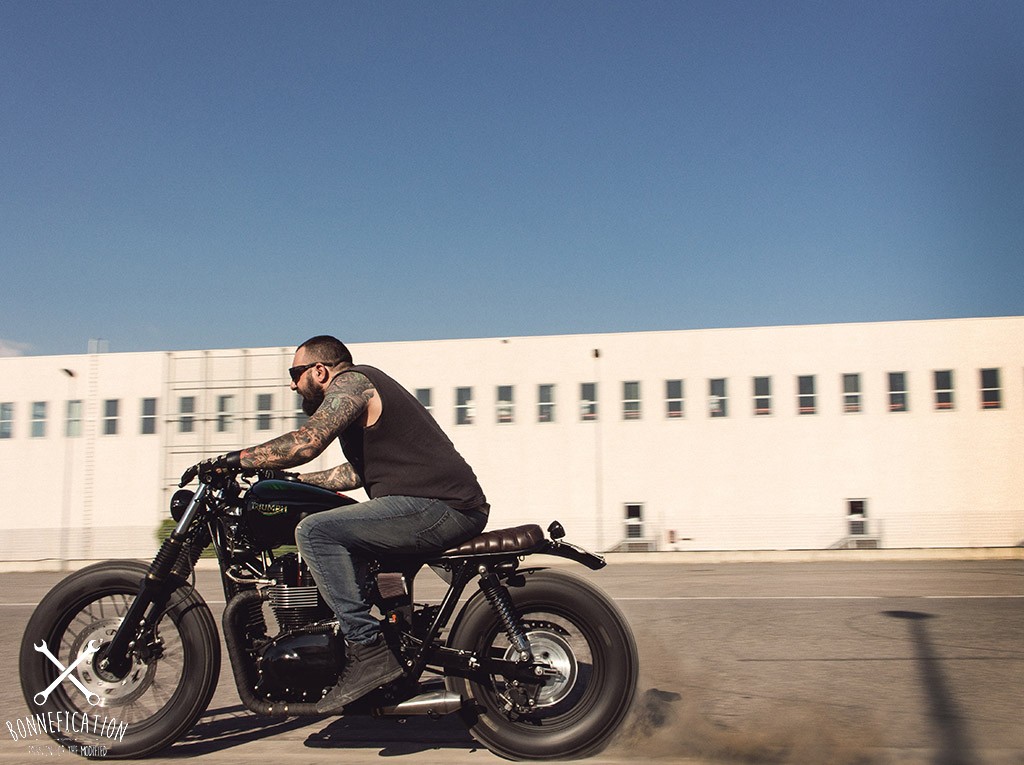 Under the seat is a small lithium 12v battery which sits in a custom made battery box with cable-tidy which features meshed holes which are echoed throughout the bike including the frame, yokes, chain-guard and rear sprocket. With the mesh being repeated on the black powder-coated engines sprocket cover. 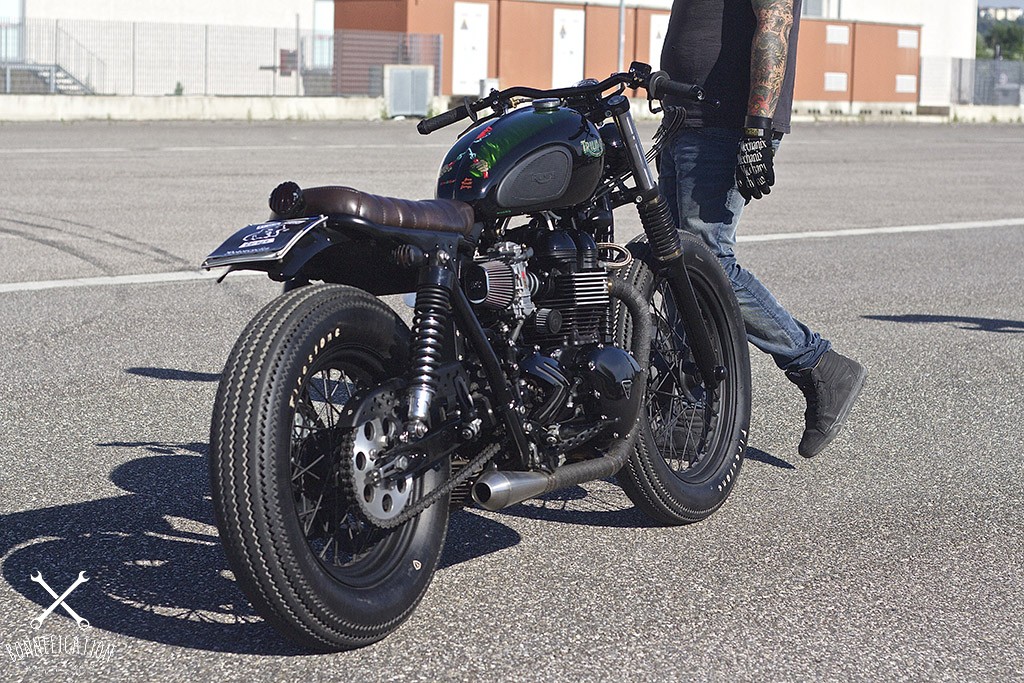 This leads on to Keihin FCR 39mm Flatside Carbs and K&N’s, which when paired with the wrapped stock headers and a modified end cans will make this Triumph go and sound a good as it looks. The joy of FCR’s is not just the power boost they give, but also the sound they give, which reminds me of a menacing breathy Darth Vader taking big gasps… who thought that could be sexy! 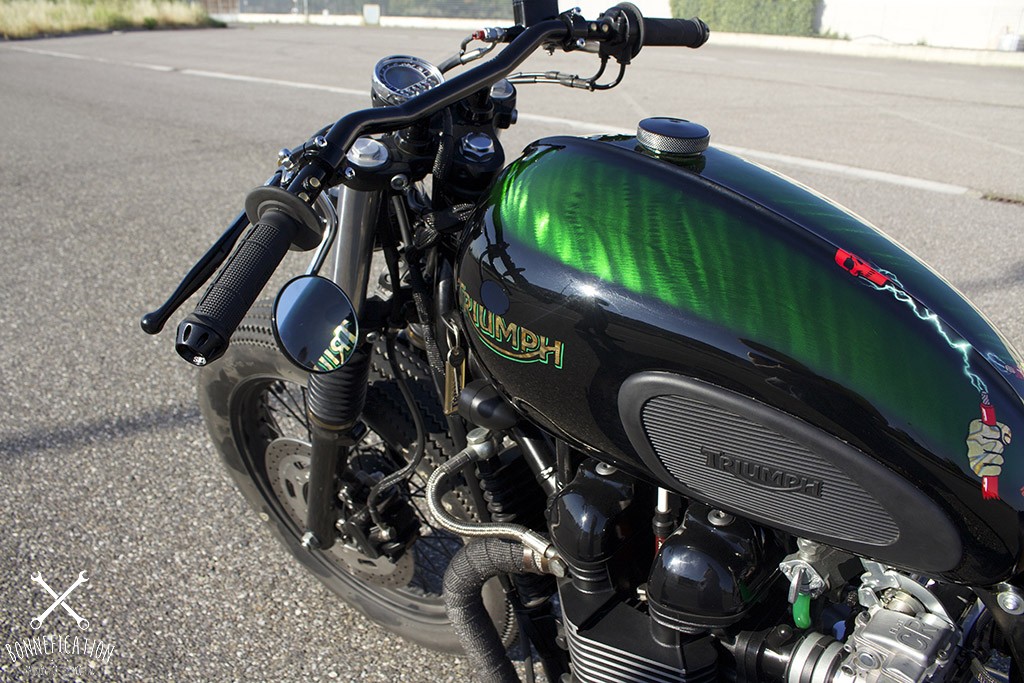 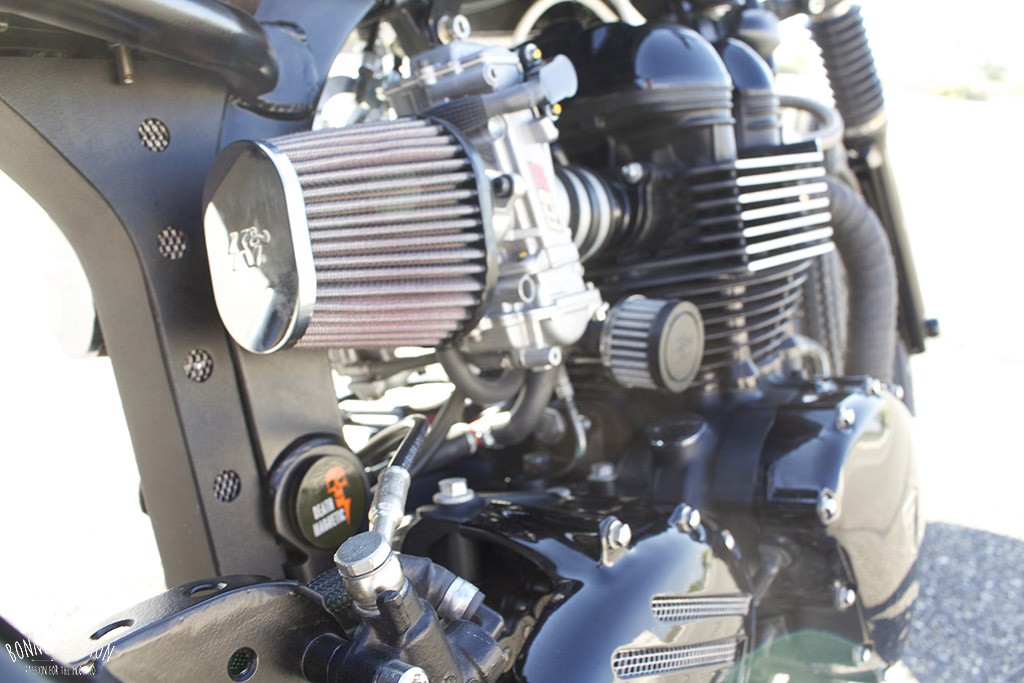 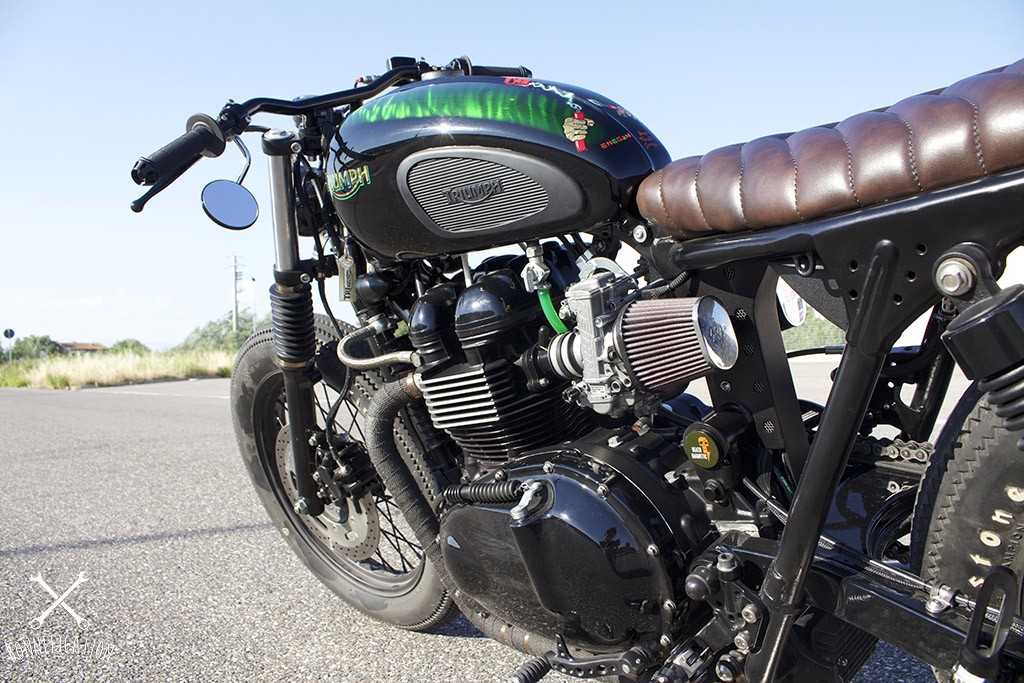 The front wheel is stock with the rear being changed for a 16″ from a Harley Sportster, this allows the fitting of those super cool and retro Firestones which when paired with that classic TR6 tank gives this Triumph the desired classic-retro look. Other details include black bars with custom welded risers which have been fitted with cool brass micro switches cleaning up the bars a treat. The modifications continue with a grilled black Crime Scene headlight and grilled turn signals – Overall, bloody nice bike, nice work! 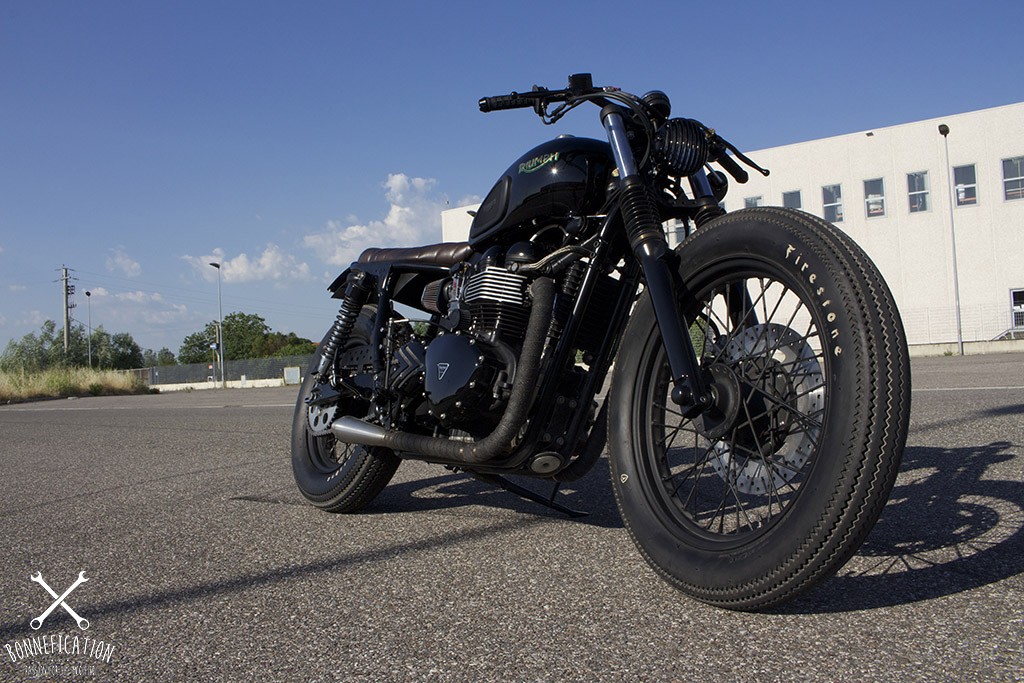