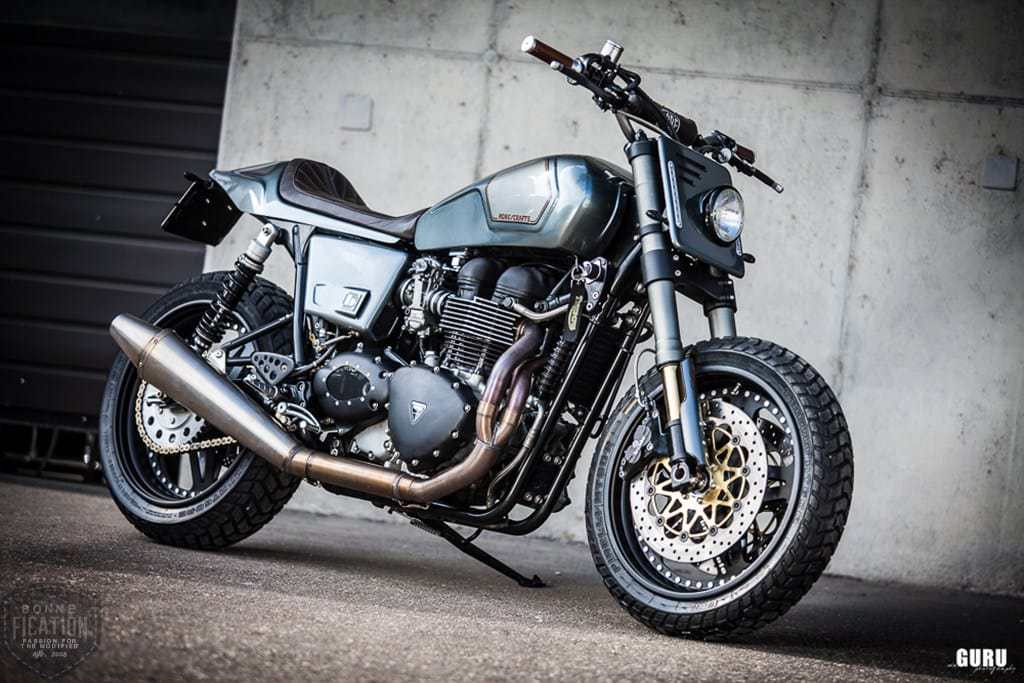 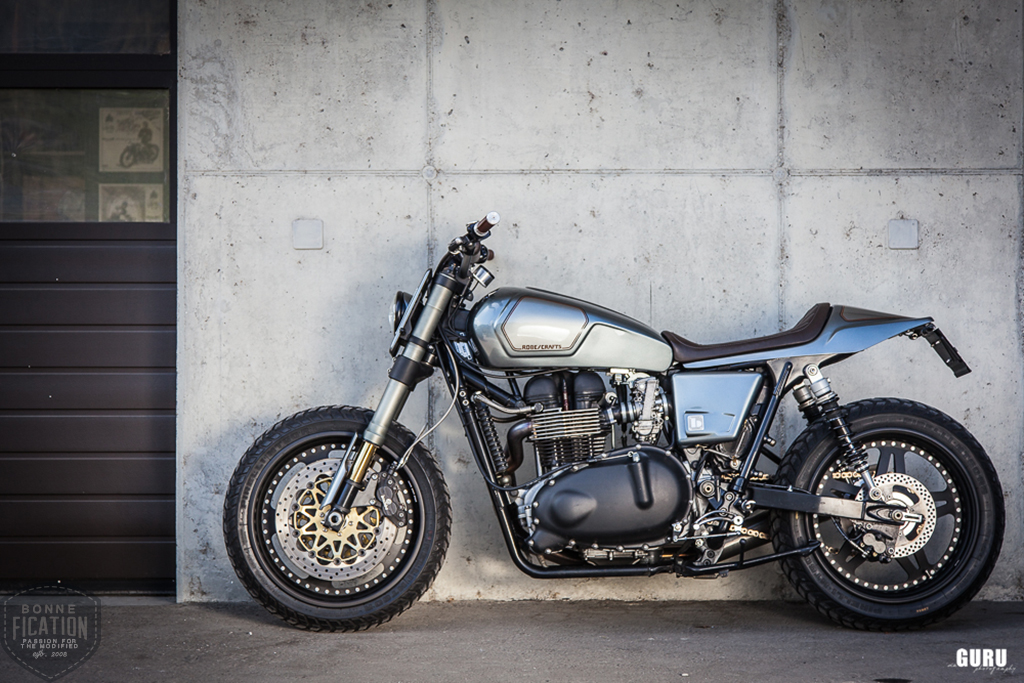 Ive touched on the subject or ‘Trackers‘ when Bonnefication featured Mule Motorcycles’s homage to Gene Romero’s 1971 Triumph Team bike, a build which in my opionion, is probably as good as a road going Hinckley Triumph Bonneville ‘Tracker’ can get… 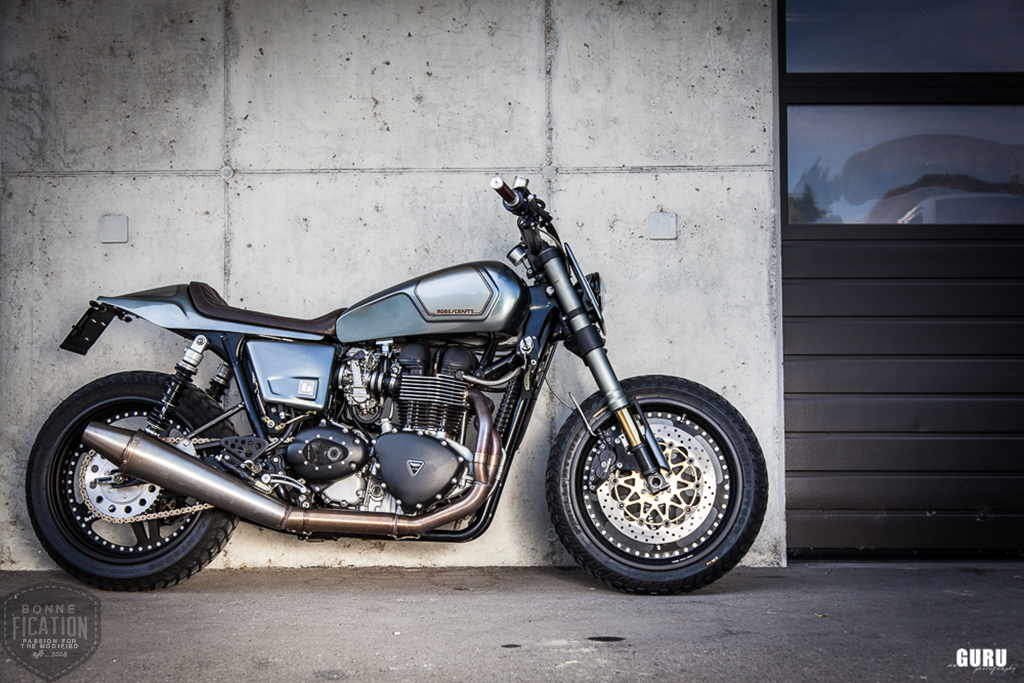 But the classic styling of that Mule Tracker might not to everyones taste, some may prefer their Tracker to be more up-to-date, something with a cooler edge, a Tracker with modern tyres, upgraded brakes & suspension and of course a dark moody paint scheme, a Triumph Tracker like the latest build from Britalmoto perhaps. 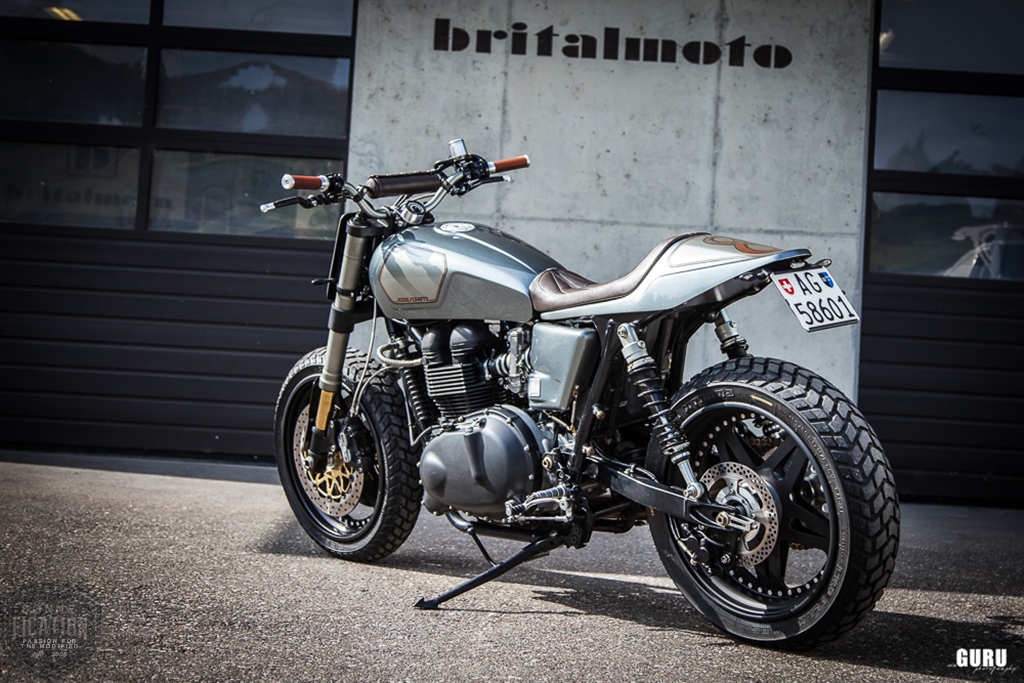 The Robe Crafts Tracker was built by Ivo Tschumi, son of Fritz Tschumi the founder of Siglistorf, Switzerland based Britalmoto. Ivo, who like many bike builders, wanted to build a motorcycle for himself, to his design and budget and not a customers. While Ivo was building the bike he was invited to display at the “Art and Wheels“ Custom show in Basel Switzerland in May of last year – so the race was on the get the Triumph Tracker finished, but sometimes its never that easy, Ivo Tschumi continues…. 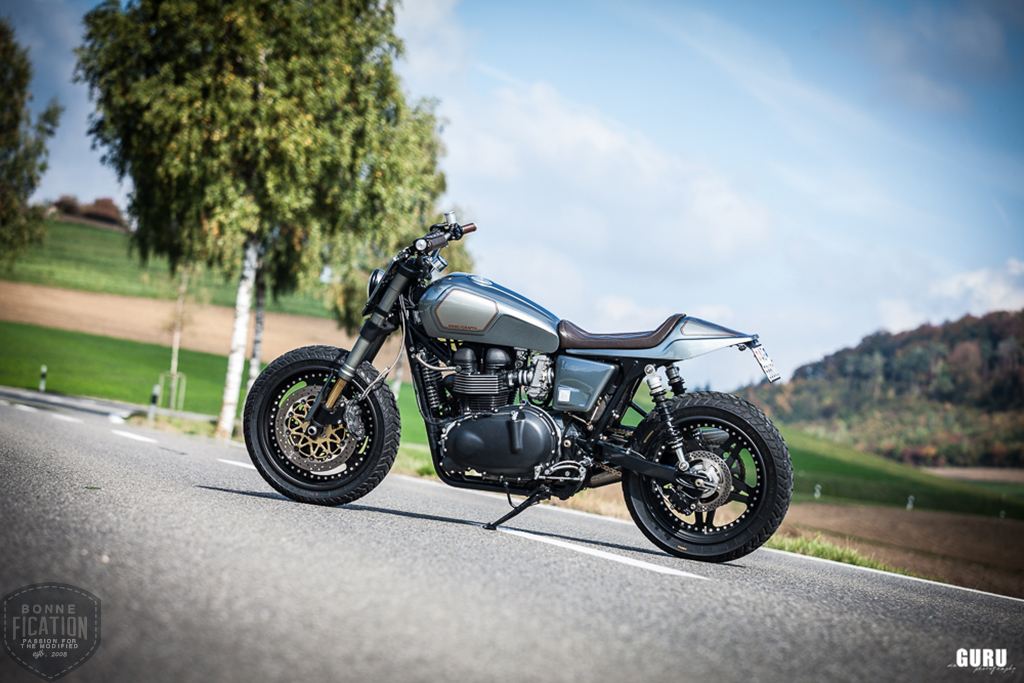 “..for one time I was good in time to finish the bike for the show, but 6 weeks before the show I had a highsider at the Racetrack. First I thought that its not so bad,only some bruises and I can go back to work some days later, but 2 days after the crash I went to the hospital because my shoulder still hurts badly – I came out in a wheelchair, my foot in a plaster, a cracked bone in my leg and a bruised hip and shoulder”. 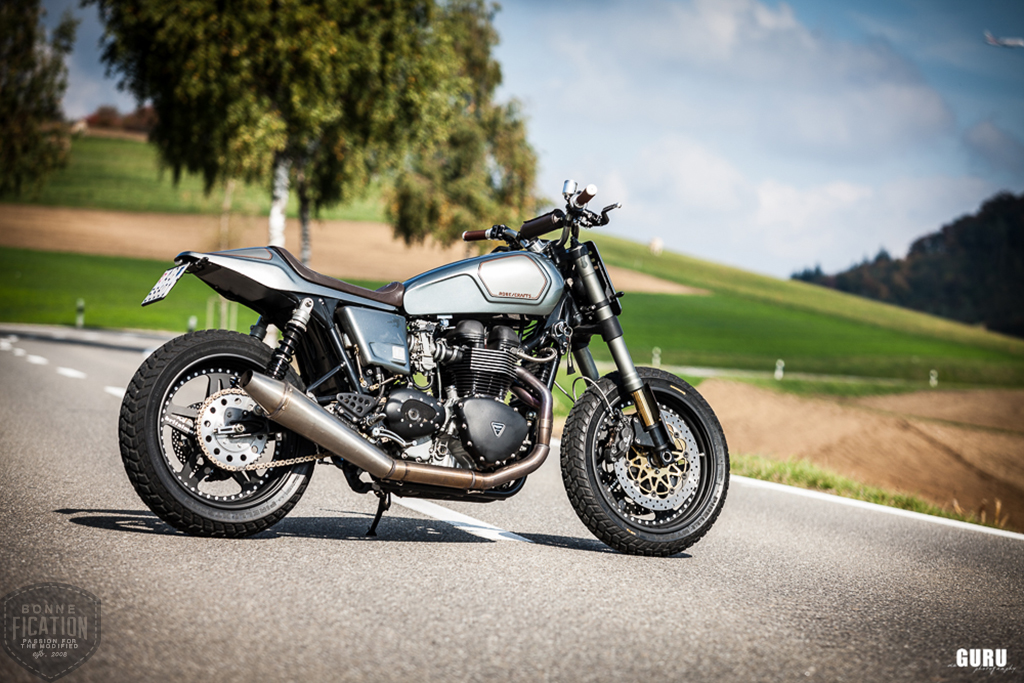 “1 ½ weeks I stayed at home, but I still want to finished the bike, I really want to be part of the show, so I dragged myself to the workshop and start working again, welding, milling and all the other works with the plaster and the sticks – that wasn’t as easy as I thought and I only had 4 ½ weeks”.

“And almost 1 week before the show my painter dropped me like a hot potato, and I just thought “Fuck” –all that stress for nothing. Lucky I found another guy who finished my paint-job really quickly. I also want to thank my ex-girlfriend Johanna, she did the striping and letterings in the last 3 days” (nice girl TS). 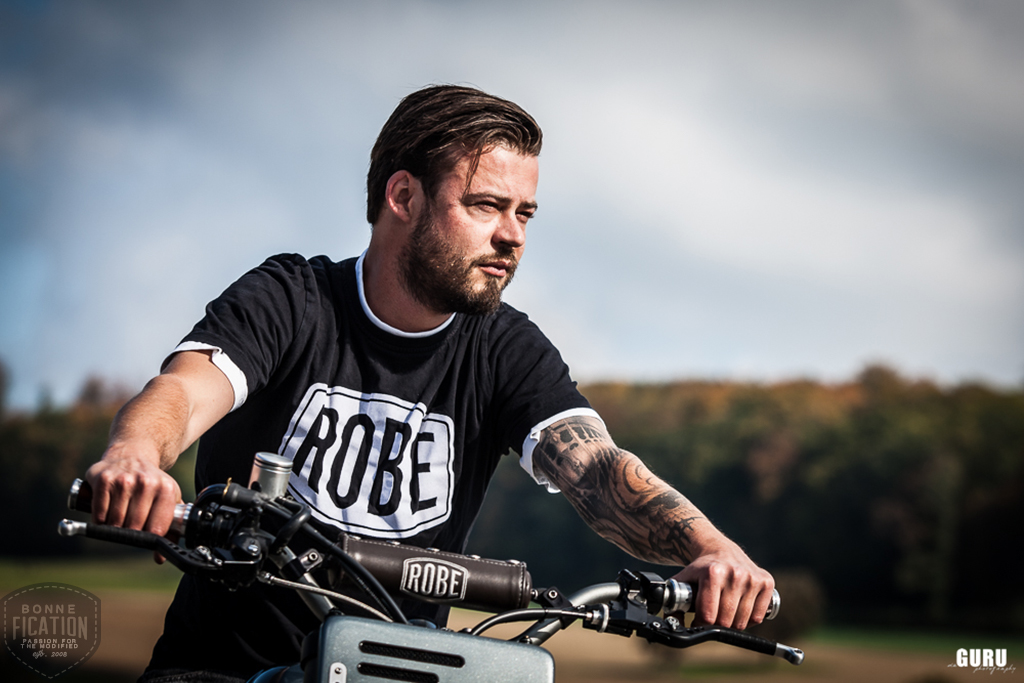 “I also used this show to promote my new label Robe/Crafts which concentrates to kit out bikes and maybe later the rider also. The tank and seat I modelled and designed with clay. A good friend, Chris Maertl built the tank in alloy for me, he did a lot of works for me in the past”. 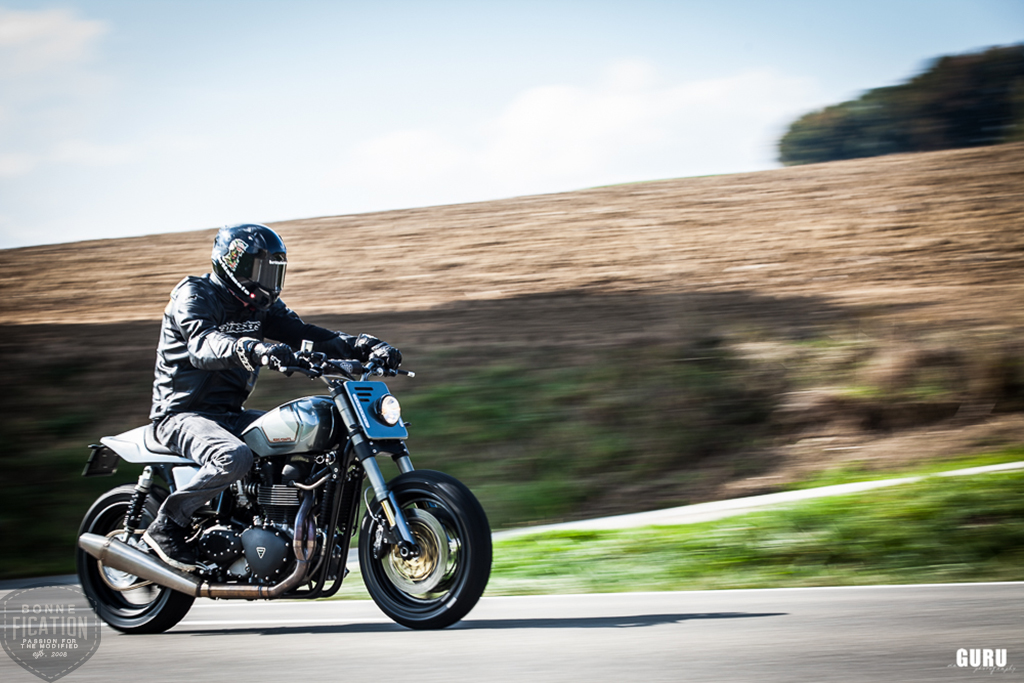 “The negative for the seat I did by myself, another company did the positive because there was not enough time anymore. Also the Handles I did conventionally at my workshop from Alloy 7075, a other good friend did the cnc machining to fit the gascables”. 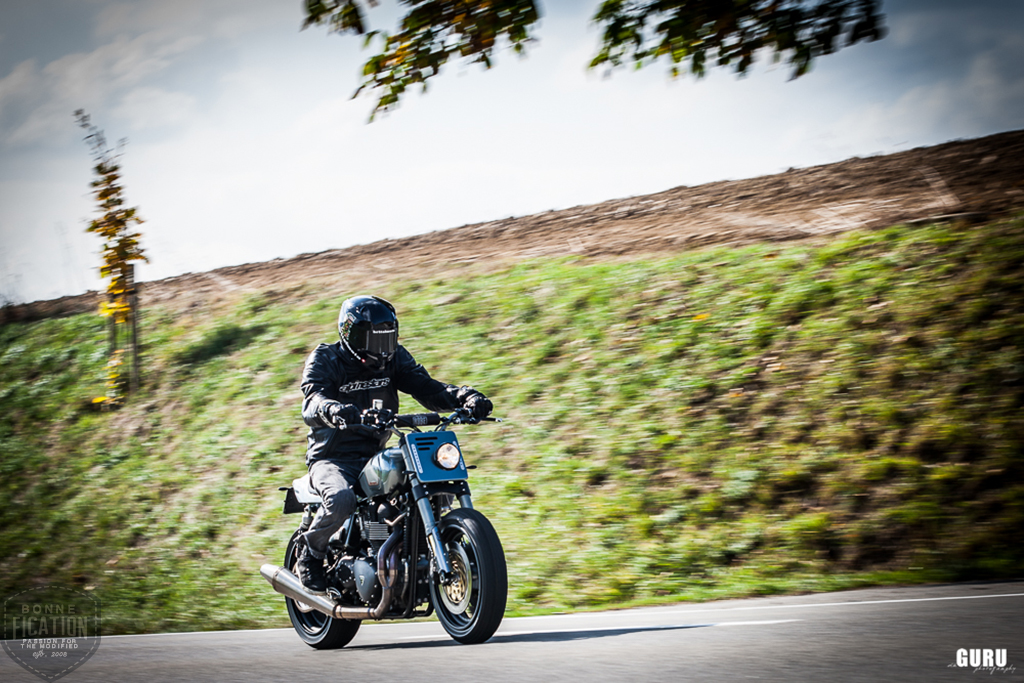 “Other parts like the frontmask, holders, forkcovers, complete footrests, chainwheels,coverplates, Numberplate/turnlightholders are done by myself. All these parts from the Robe-Tracker and older Parts I designed for Customer bikes as well. online shop”

Self made Parts / Robe Crafts Parts: