Many custom motorcycles are built to be practical, usable everyday machines, built to feed people’s first for something different, something cool. But after a while all these bikes run the risk of looking the same, separated only by a paint scheme, indicator and tyre choice. The Triumph Twin is a good example of a motorcycle which, when being customised, follows a blueprint, a blueprint which has, and will be followed by countless bike builders the world over – a blueprint which even Triumph themselves clearly have a copy of, though, I would suggest some areas of their copy had coffee stains blotting out a few key details.

I think this virtual blueprint, certainly in it’s current form, needs a much needed update – but just how much can be changed, and will it still be the guide to building a practical Triumph Twin I just don’t know. I imagine it comes down to what really is ‘practical’ – but are dual-sport, vintage or fat tyres really practical for modern roads? – are mini turn signals, small head and tail-lights really practical at night? – ever ridden in the wet, or off-road with shorty mudguards?… practical?… really!. Maybe practical is the wrong word, maybe the words are ‘popular’… ‘trendy’…’hip!’ 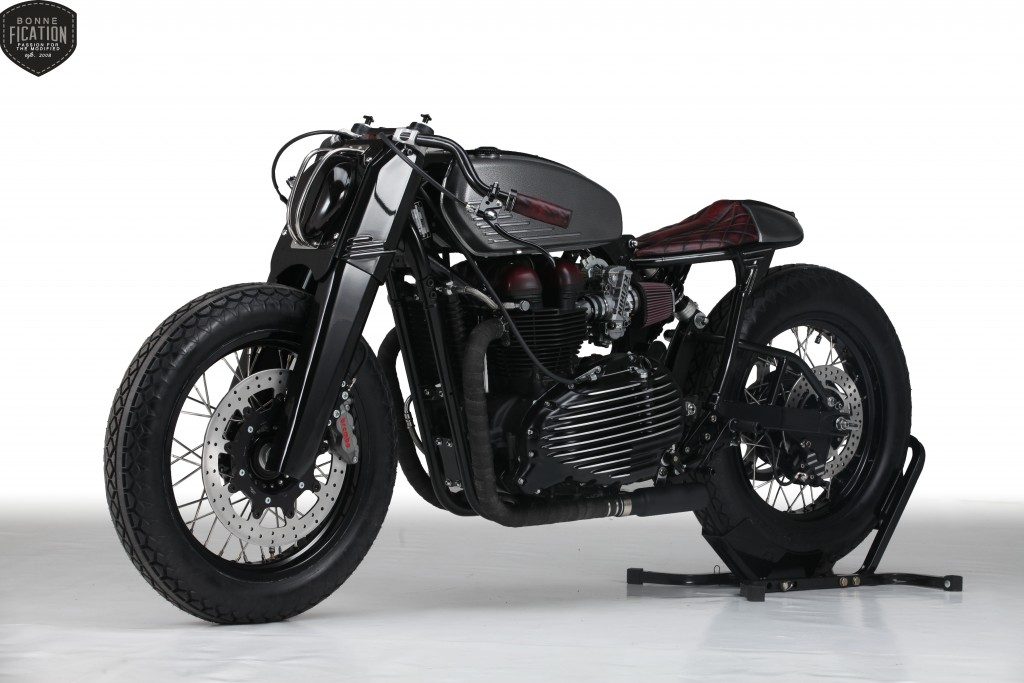 This website wasn’t founded to just showcase practical and useable Triumph Twins, it was also created to inspire and showcase imaginative, exciting and crazy builds – builds which I hope will inspire others, builds which one day, just might be the next popular, trendy and hip thing, and perhaps the next blueprint. 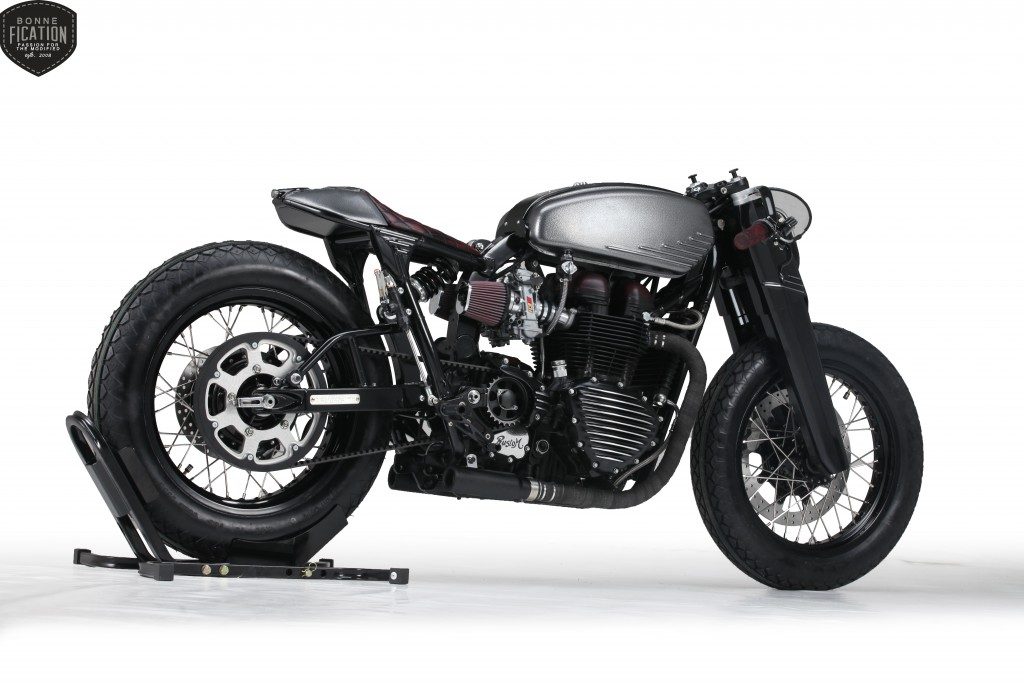 It was when I saw the Triumph Forty by Rustom that I knew I was looking at something inspiring. Perhaps not to everyones taste – like fairings were not to everyones ‘taste‘, but for me this build is something to get excited about, as perhaps, its a build which could become the foundation to a new blueprint…. 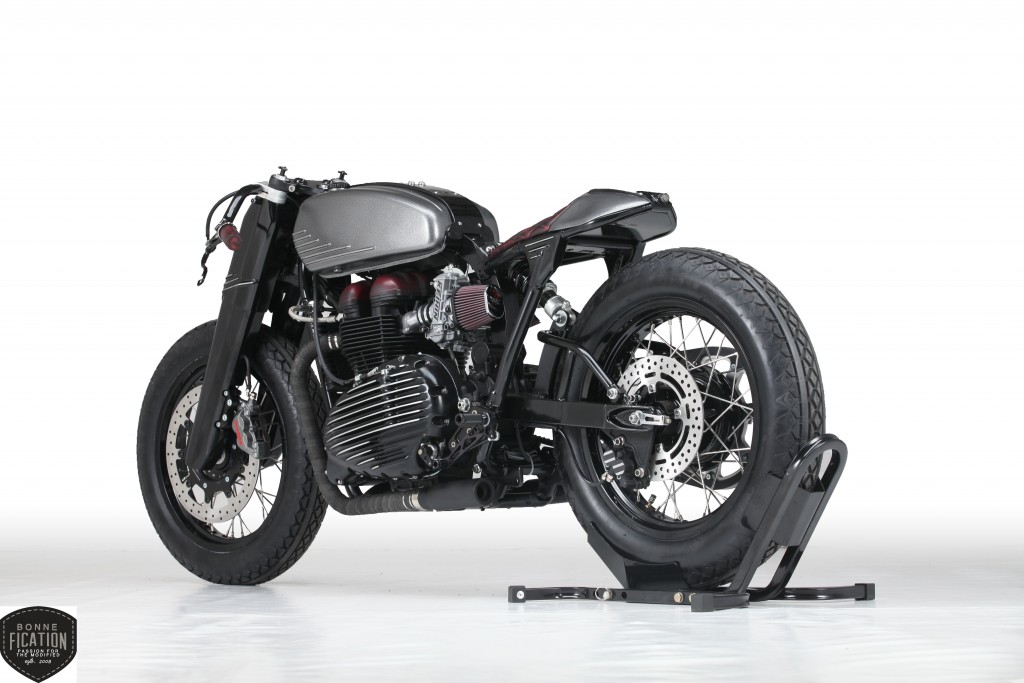 Mattia and Roberto are the names behind Triumph Forty and Rustom, a custom motorcycle workshop based in Lodi, 30 or so miles outside of Milan Italy. Mattia is no strangers to Triumph Twin’s, having been an official Triumph mechanic for ten years, before founding Rustom with friend Roberto, a carpenter with a long history of building custom motorcycles. 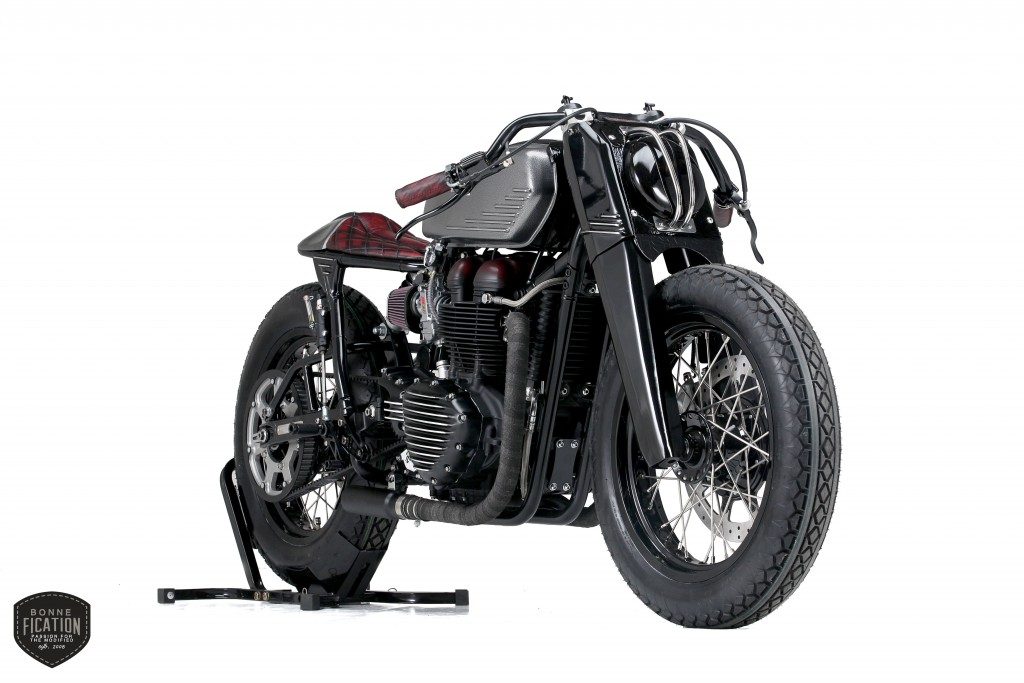 It was after working on the Neverland, a custom Triumph Twin built with Lodi Triumph as parts of the official Triumph contest ‘So Special‘ that Mattia and Roberto got together over a beer, and decided to ‘follow their dream’ and open their own workshop.

“Now Rustom is a solid reality. Born in the middle of nature, in the city of Lodi, it’s a simple and small reality, vintage looking and friendly, like a family. Sometimes customers are coming to our workshop just for a beer or a coffee, reading a magazine and listening to some good rockabilly music while we are working. We are organising motorcycle trips and some small events, everything is made for passion, not for money. Of course it’s our job, but we don’t want to become rich with our workshop, we just appreciate that everyday we are living our dream, and with some small necessary money this is enough to reach happiness in human life.”

The Triumph Forty (named to celebrate the clients 40th Birthday) started life as a stock 2002 carb model, 790cc Triumph Bonneville, (bloody good place to start a Triumph Twin build). The frame went under some serious modifications, having any unwanted bracketry removed,  including the rear peg, side cover and shock mounts. The frame was then cut & looped and fitted with a Rustom mono-shock swingarm setup, fitted with a YSS custom made shock absorber. 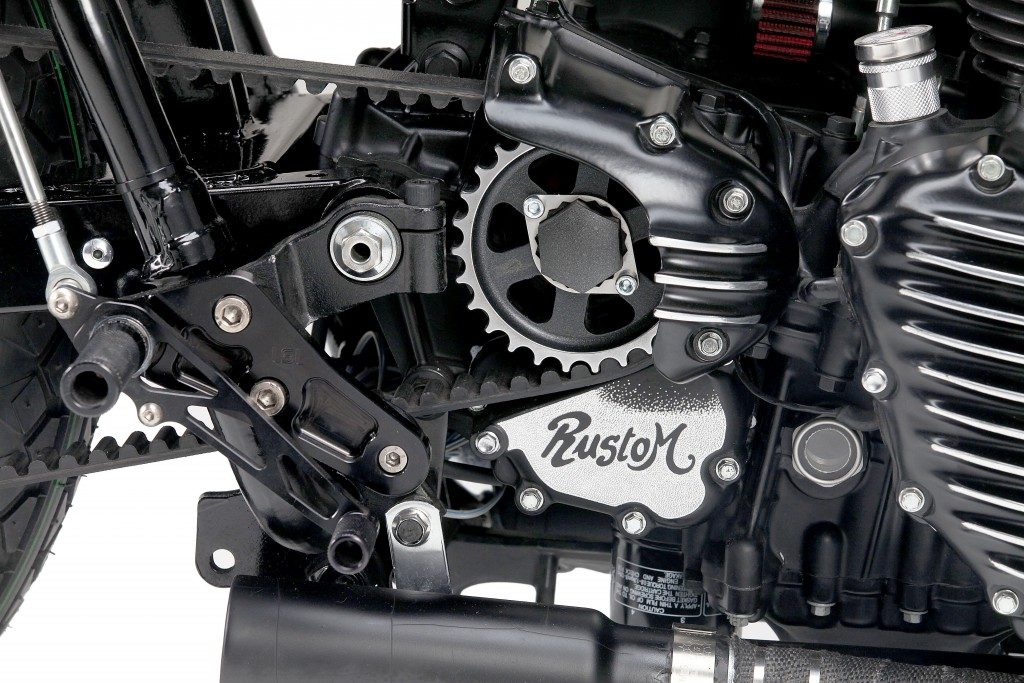 Not that you could tell at first glance but this build uses the stock forks, which have been lowered 40mm with progressive spring with preload adjustment and fitted with custom made telescopic fork covers giving the bike a cool streamline finish. 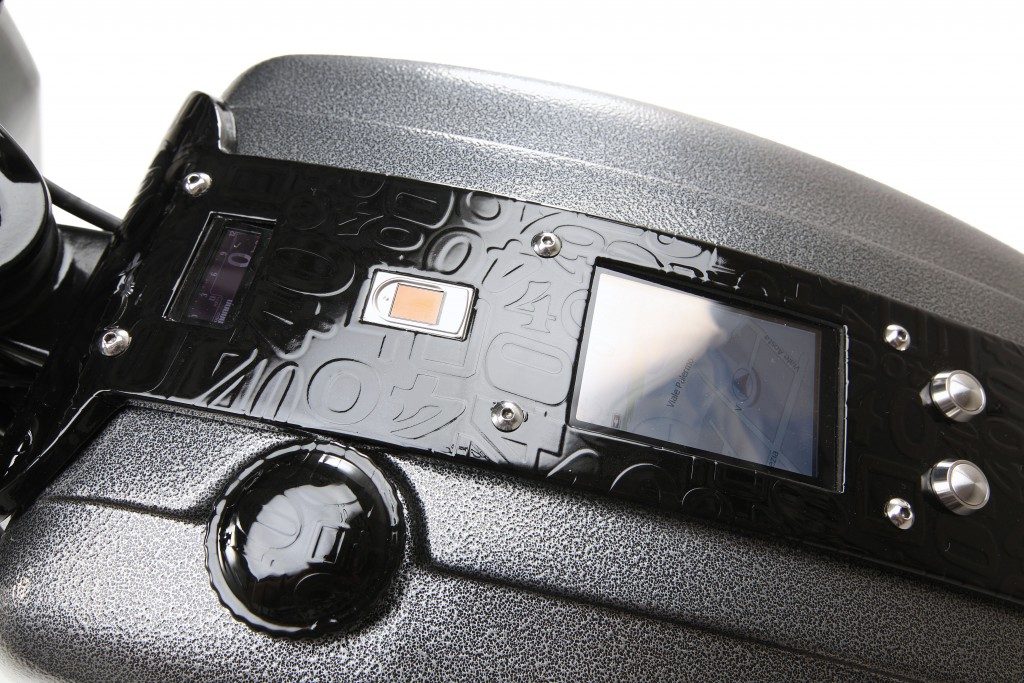 The Tank,which along with the seat cowl was made in house and feature Art Deco style detailing, which has been mirrored on the frame and fork covers, also houses the bikes LED instrument and warning lights, as well as a very practical touch screen navigation system and fingerprints recognition ignition. The seat cowl with integrated LED tail light, which follows the contours of the new frame was covered by Alessandro Starace of AS Design, who also made the matching handlebar grips. 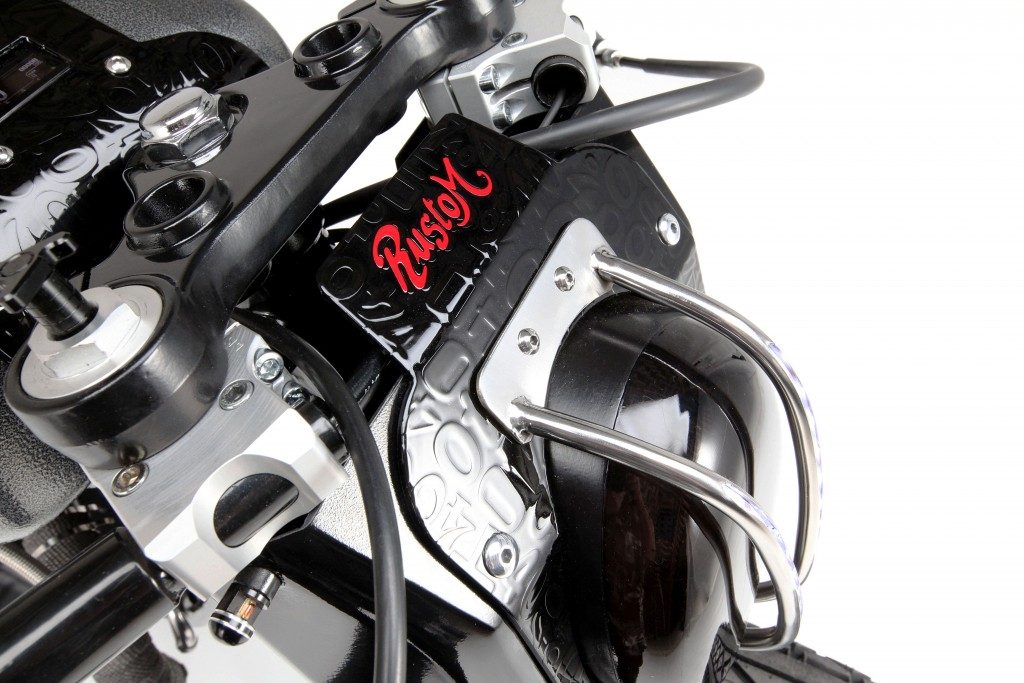 Grips which in-turn have fitted to a Rustom made board-tracker handlebar, attached to the bikes using LSL handlebar clamps. The bars also sport a set of Kustomtech brake and clutch controls, as well as a set of Motogadget switches, tied into a Motogadget M-unit and on to a Lithium battery which has been hidden under the seat cowl. At the front of the bike resides a Rustom made LED headlight and LED turn signals. 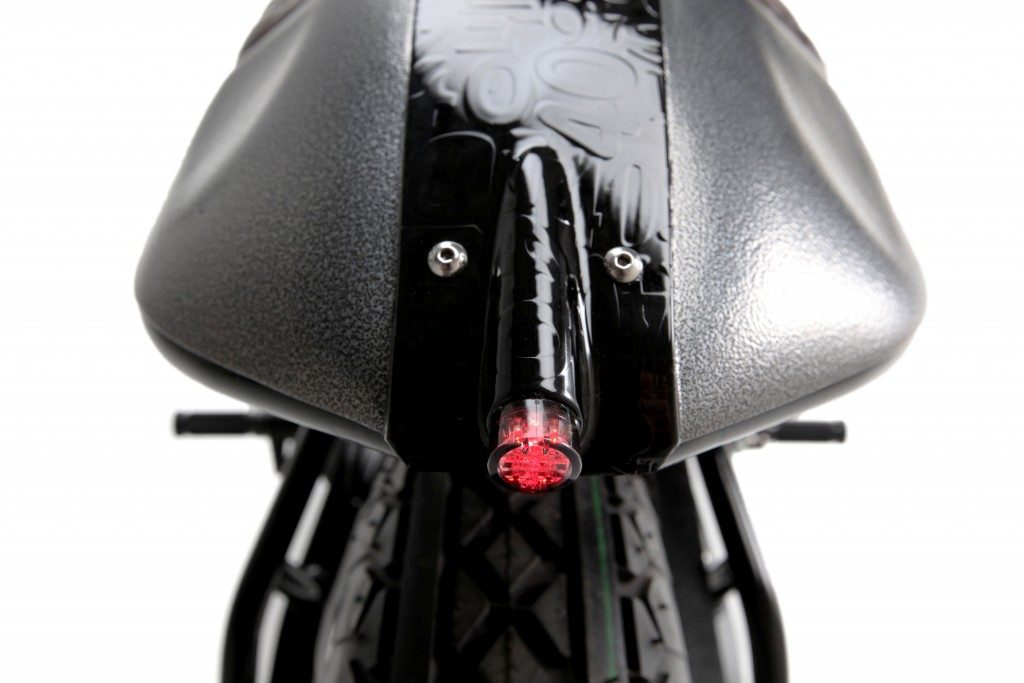 Fitting the wrong wheels and tyres can make or ruin a bike, I mean, whats a scrambler on sports tyres! – not making that mistake ‘Forty‘ has been fitted with a set of 18″ custom built rims on stock hubs laced together with Inox spokes, the finished wheels have then been fitted with Cocker Diamond Tyres 4.00X18 and 4,50X18 with a tubless conversion from Bartubless, finishing the bike off a treat. 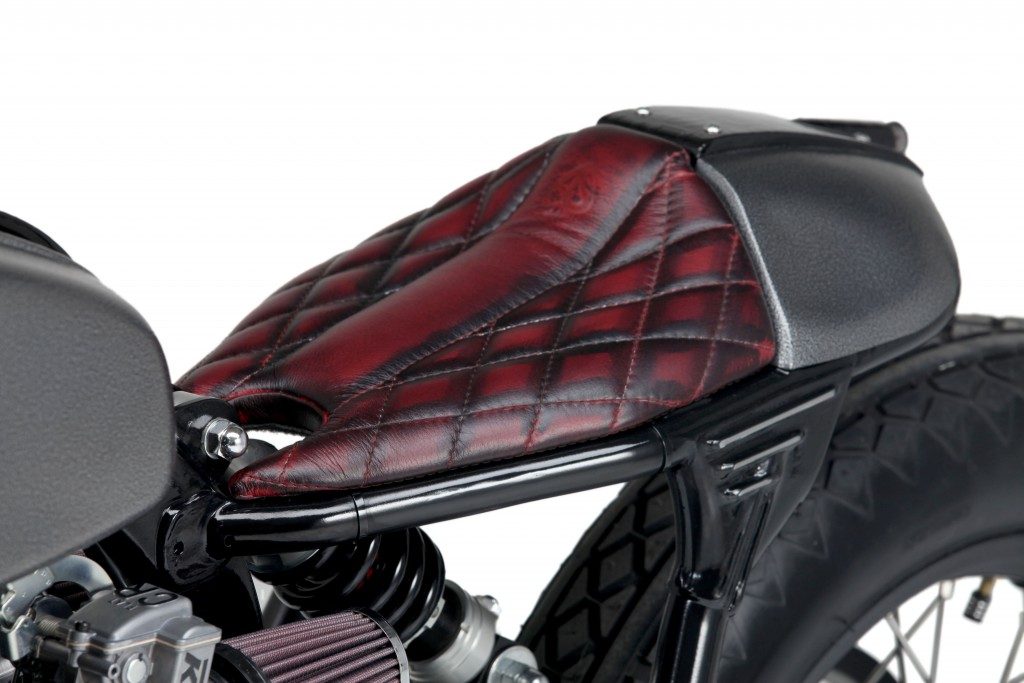 Unlike many custom Triumph Twins, the Forty has received a whole lot of love in the engine & power department, including a drive belt kit from Freespirits “Bigger intake and exhaust engine ducts,  Lower engine head, and a Higher compression ratio”… along with a  Thruxton Cup engine tune. The engine has then been finished off with a set of Keihin FCR39 carburettor paired with a Rustom built exhaust with Biltwell micro silencers. Finishing the engine off are a set of  Speed Merchant ribbed side covers, matching nicely with the tank, frame and fork detailing. With that added power comes the need for added braking, so at the front the stock blocks of wood have been replaced with a Brembro 340mm Big brake kit and custom brake lines.