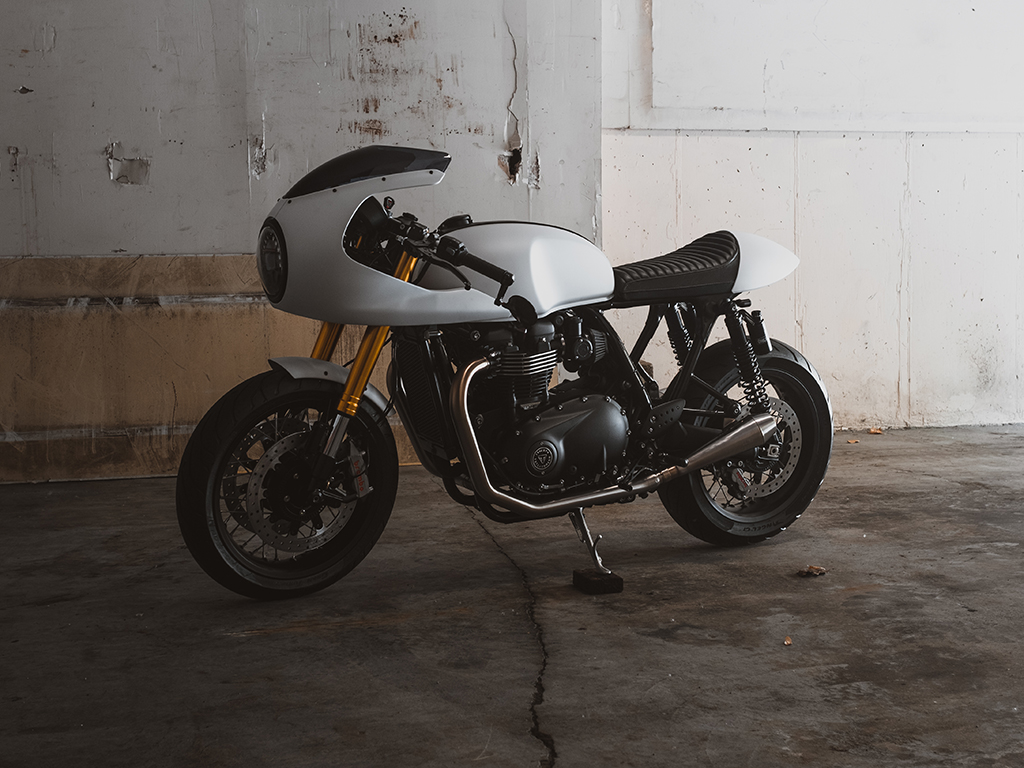 A&J Cycles is a ‘small’ motorcycle workshop located on the edge of Hillburn, a bustling town located some thirty minutes outside the metropolis of New York City. The chaps at A&J not only offer their customers a range of parts and accessories for the Hinckley Triumph Twin via their online shop, but they can also service your pride and joy, as well as build you a full on custom, just like the featured 2016 Thruxton R. 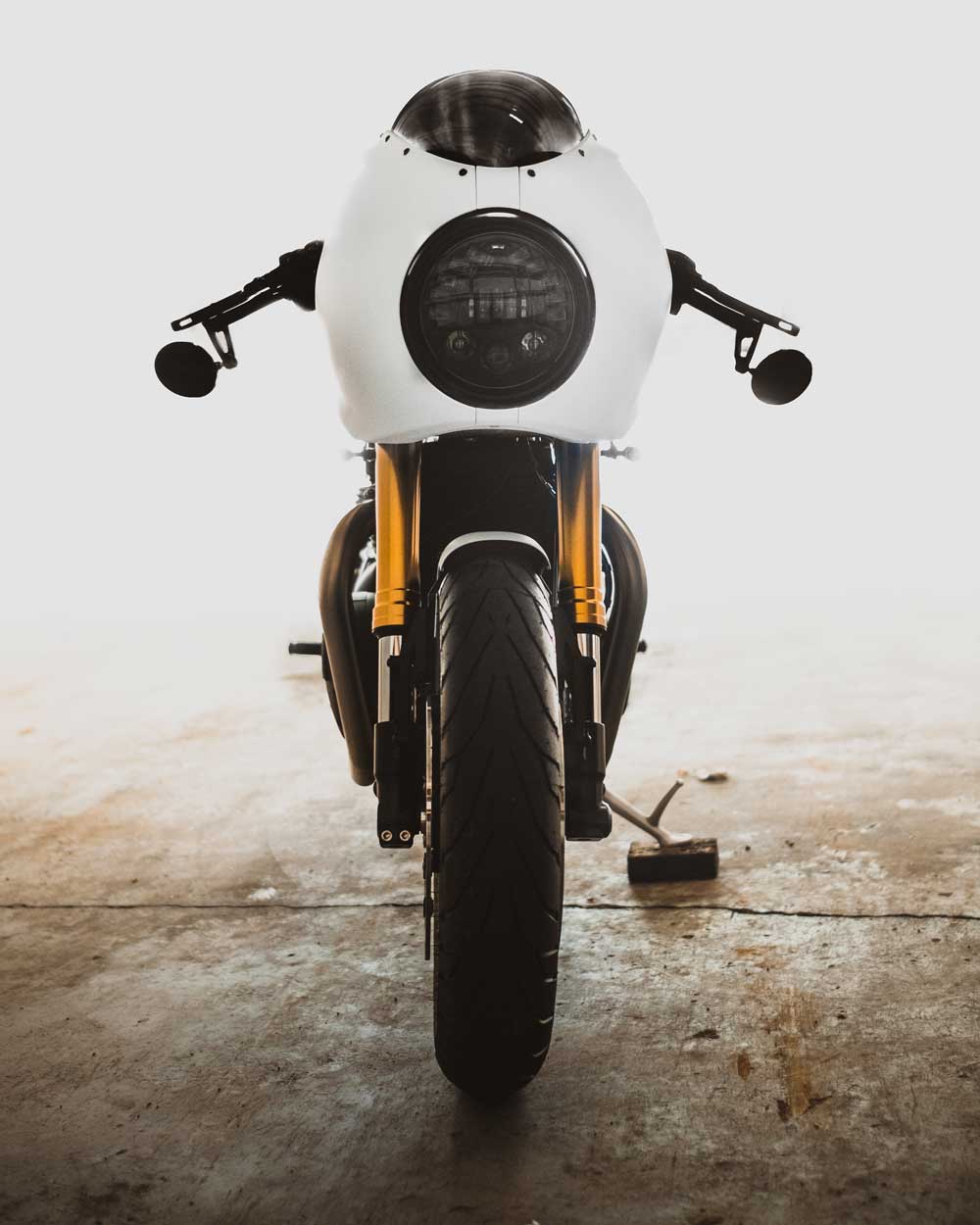 I was pretty impressed with the new Thruxton R on seeing it at its official public unveiling at the Bike Shed in 2016. But just like its predecessor, even this new Thruxton R could be better, they just need personalising, something which I feel cant be achieved exclusively using Triumphs official accessories. 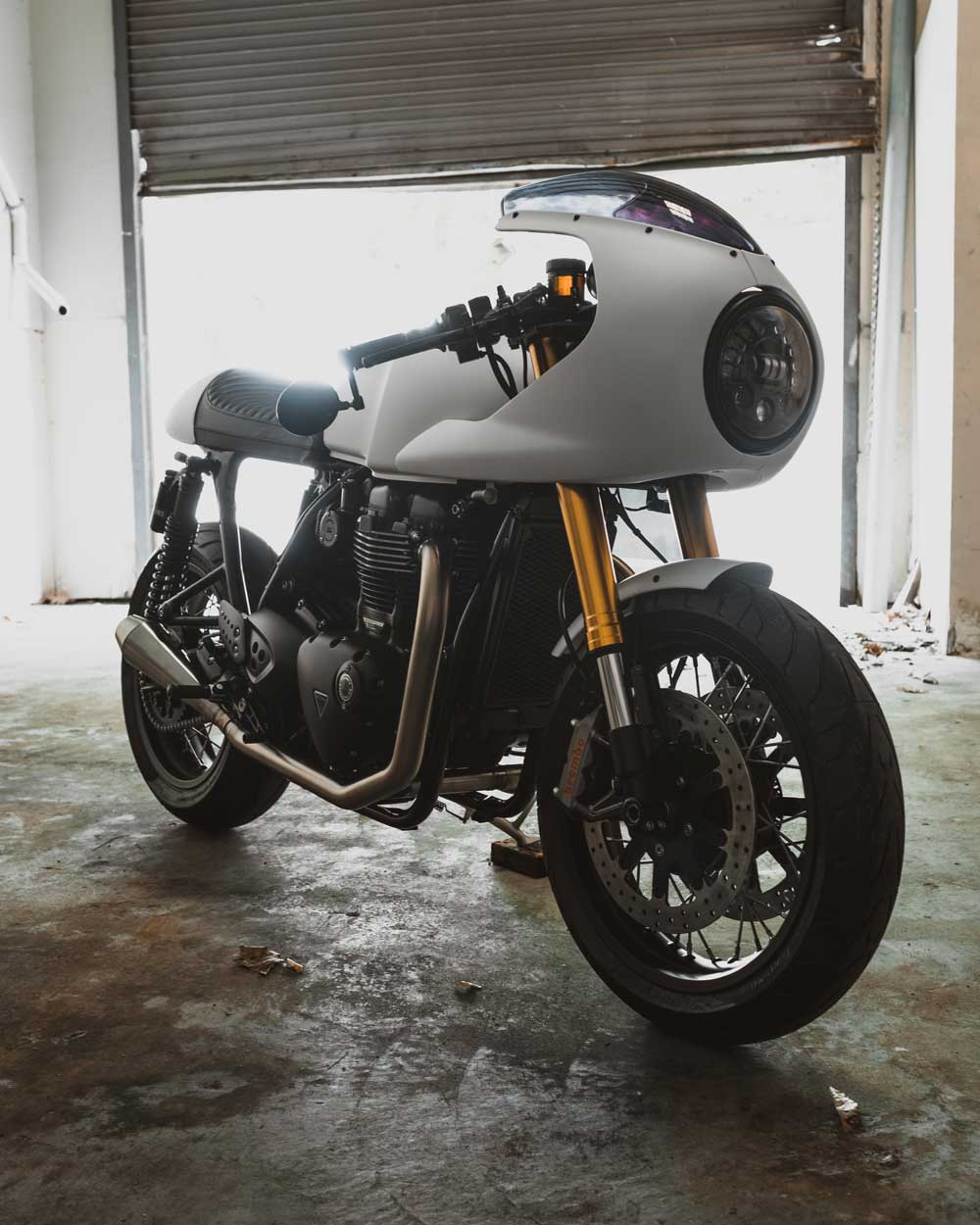 The goal on this build was to clean up and lighten Mikes stock red Thruxton R. To start the chaps at A&J Cycles removed the stock air/battery box and cleaned up the frame, removing anything unsightly including the side cover and reservoir brackets, along with the factory seat lock, which was removed and welded closed. 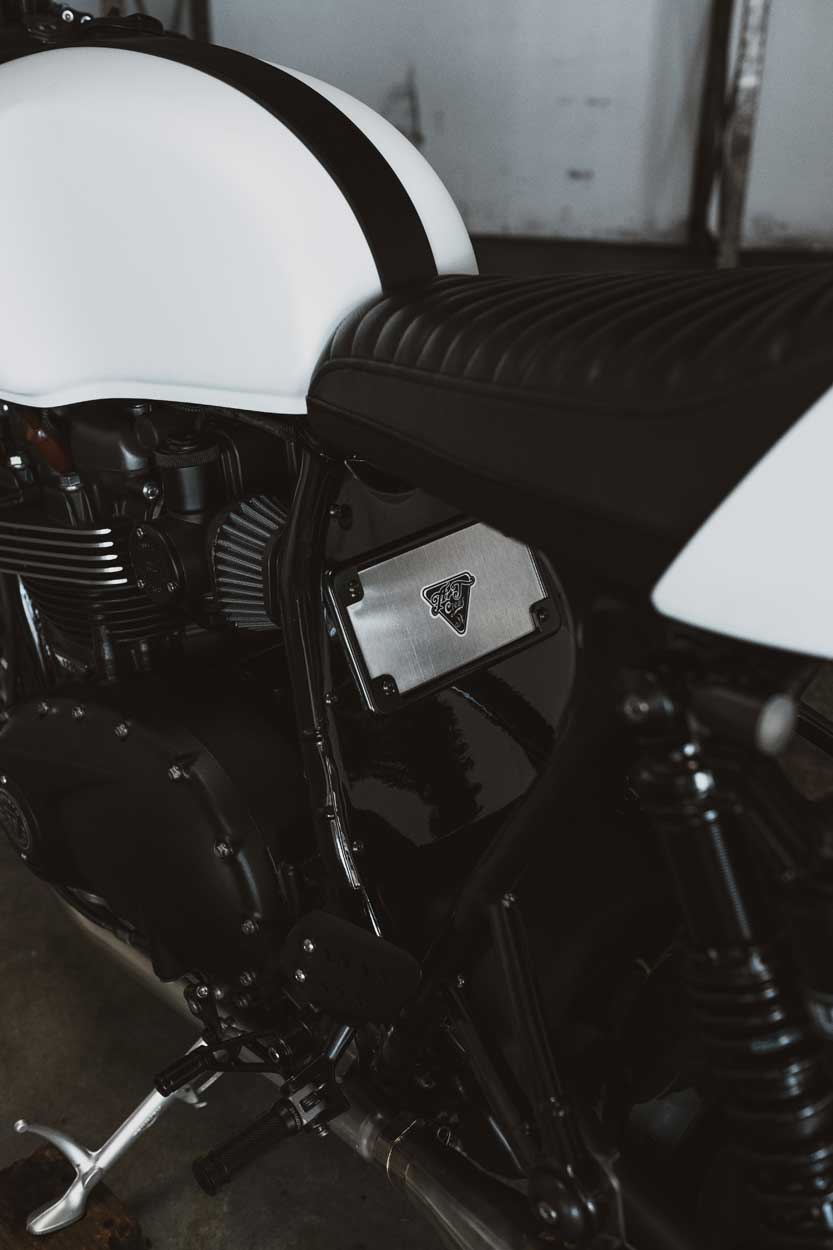 A new under-seat tray was fabricated by Dave of Slag Kustoms and welded to the frame. This now supports the Thruxton’s electronics including the ECU, a Power commander 5 and an antigravity 8 lithium-ion battery, now situated under the hump of the custom-made Cafe Racer seat cowl, a seat cowl sporting a black Luimoto Vintage seat cover and a Quick Latch mini, still allowing accesses to the undersea area. 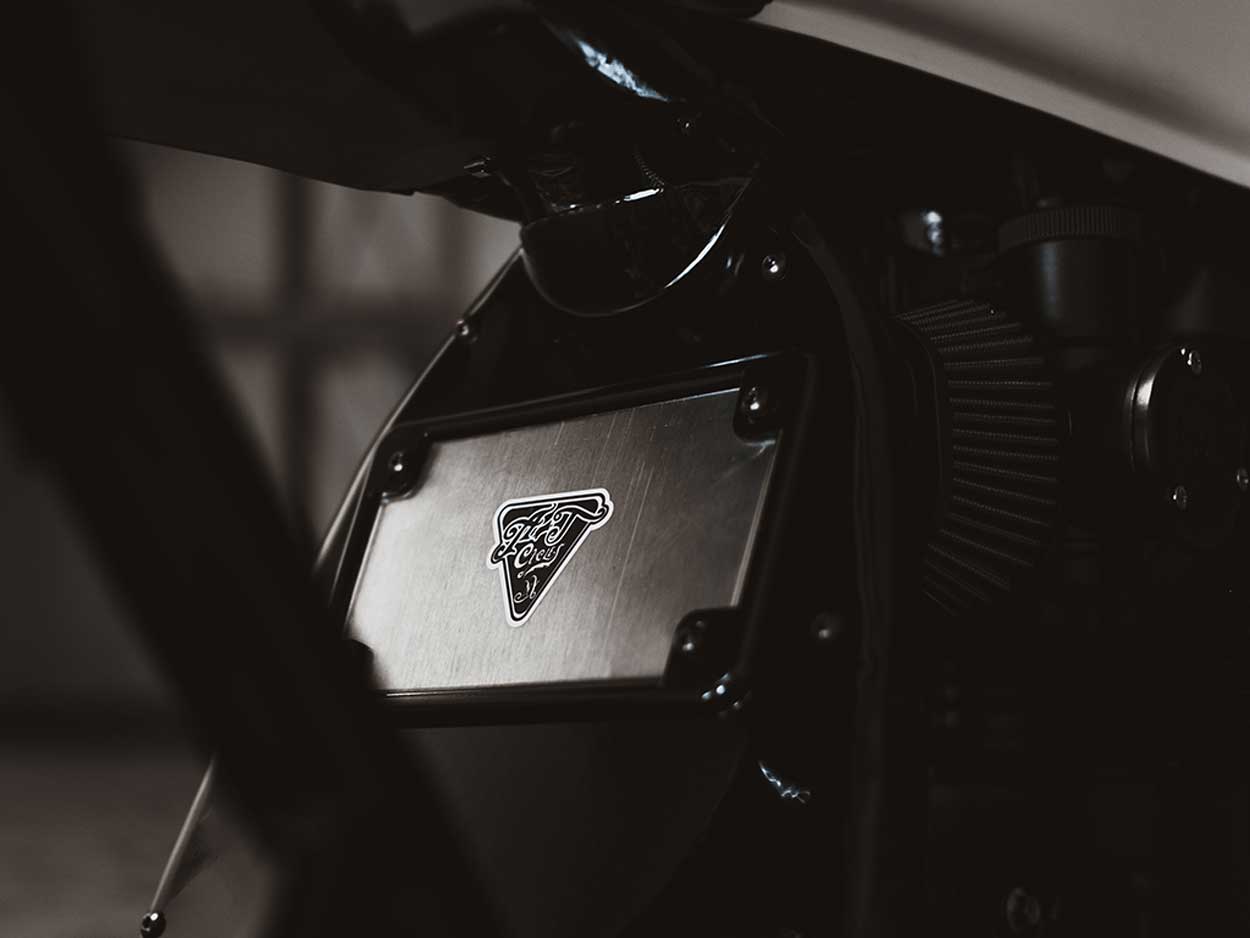 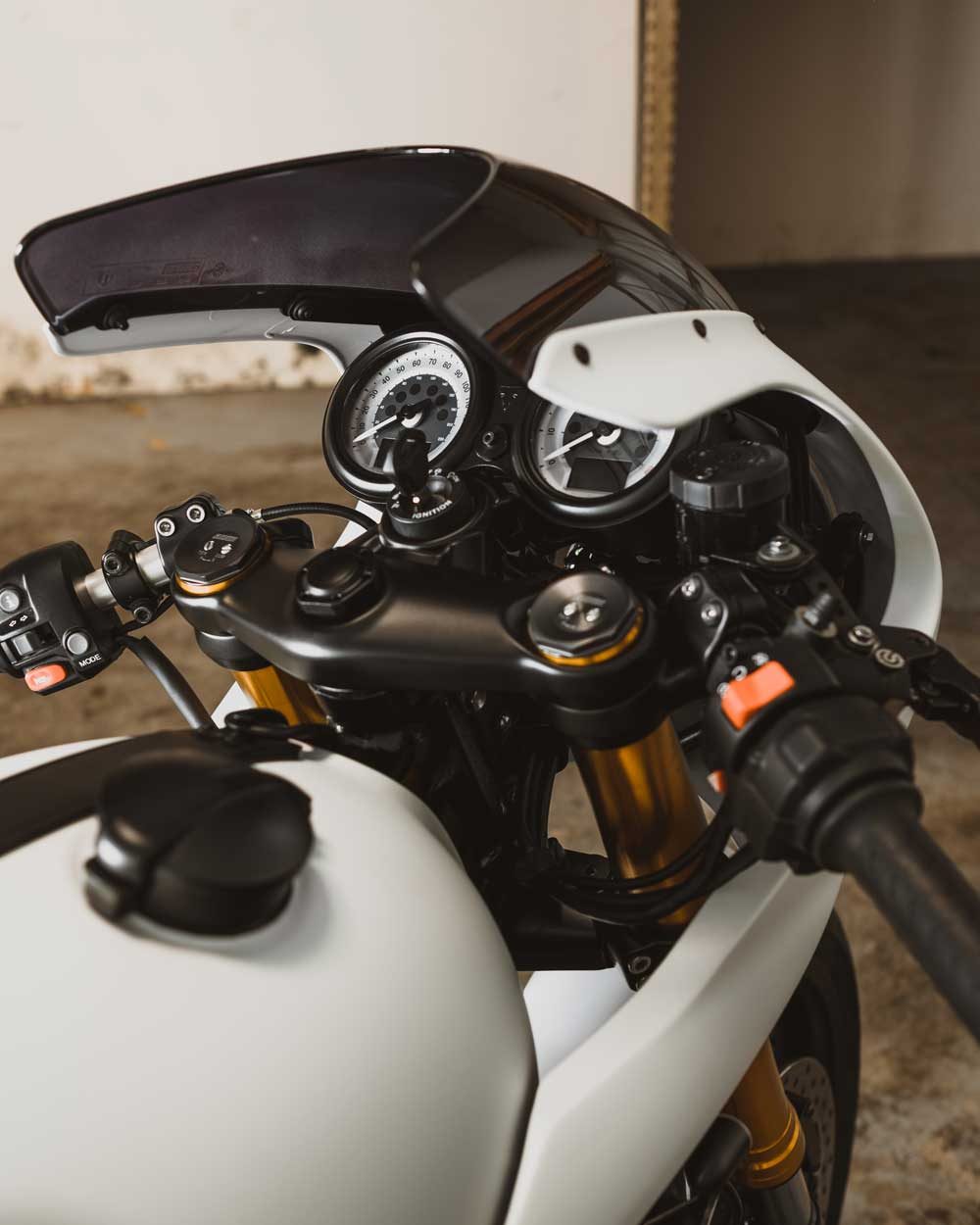 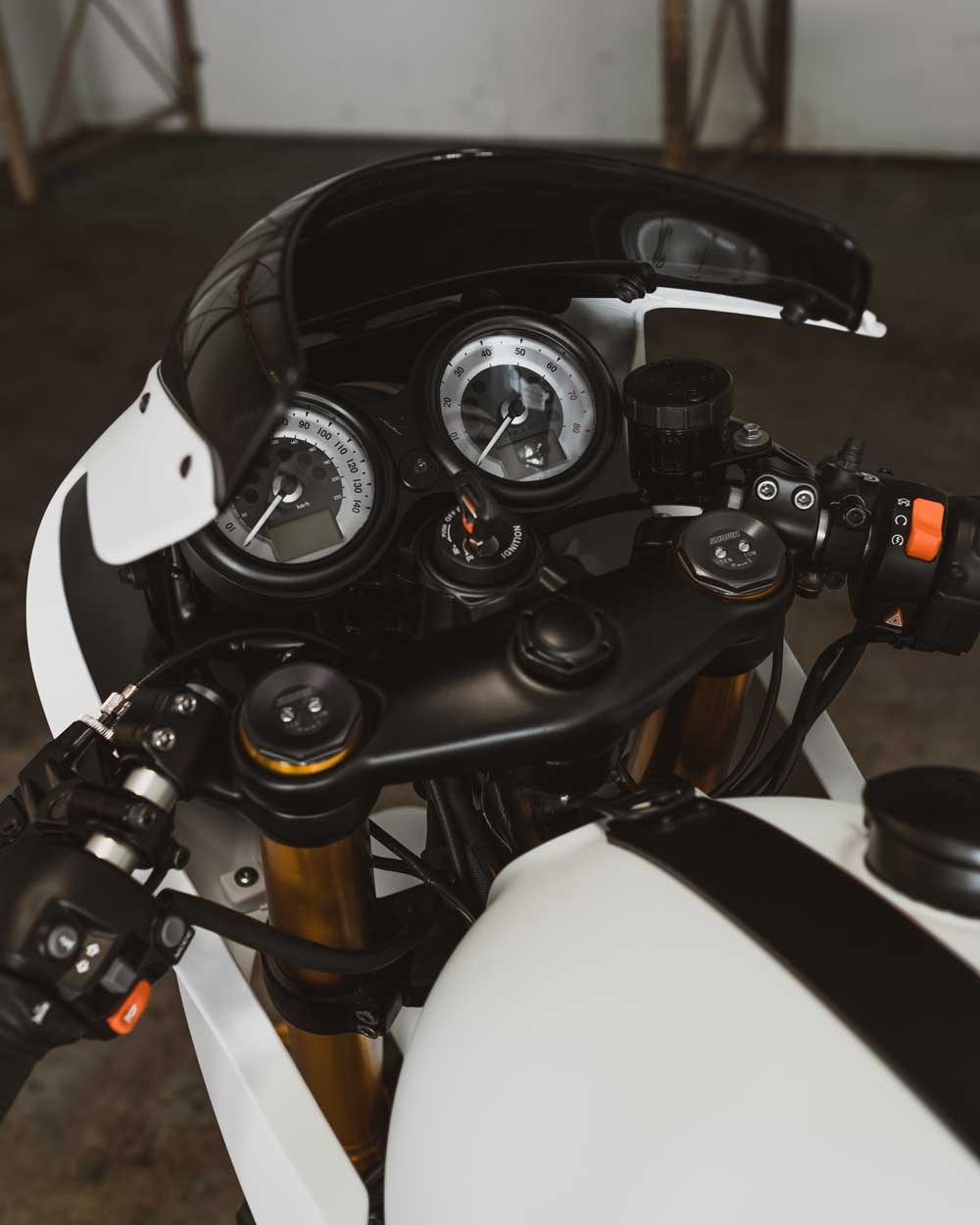 Lurking behind Triumphs four-piece injection moulded Café Racer Fairing, which is fitted with a Motodemic Adaptive 2 headlight, sit the stock switches and clocks, though this area hasn’t entirely missed out on the modifications, receiving a set of 3D levers and Spy Arm Mirrors from Rizoma, who also supplied the front mudguard and a wave rear brake reservoir. 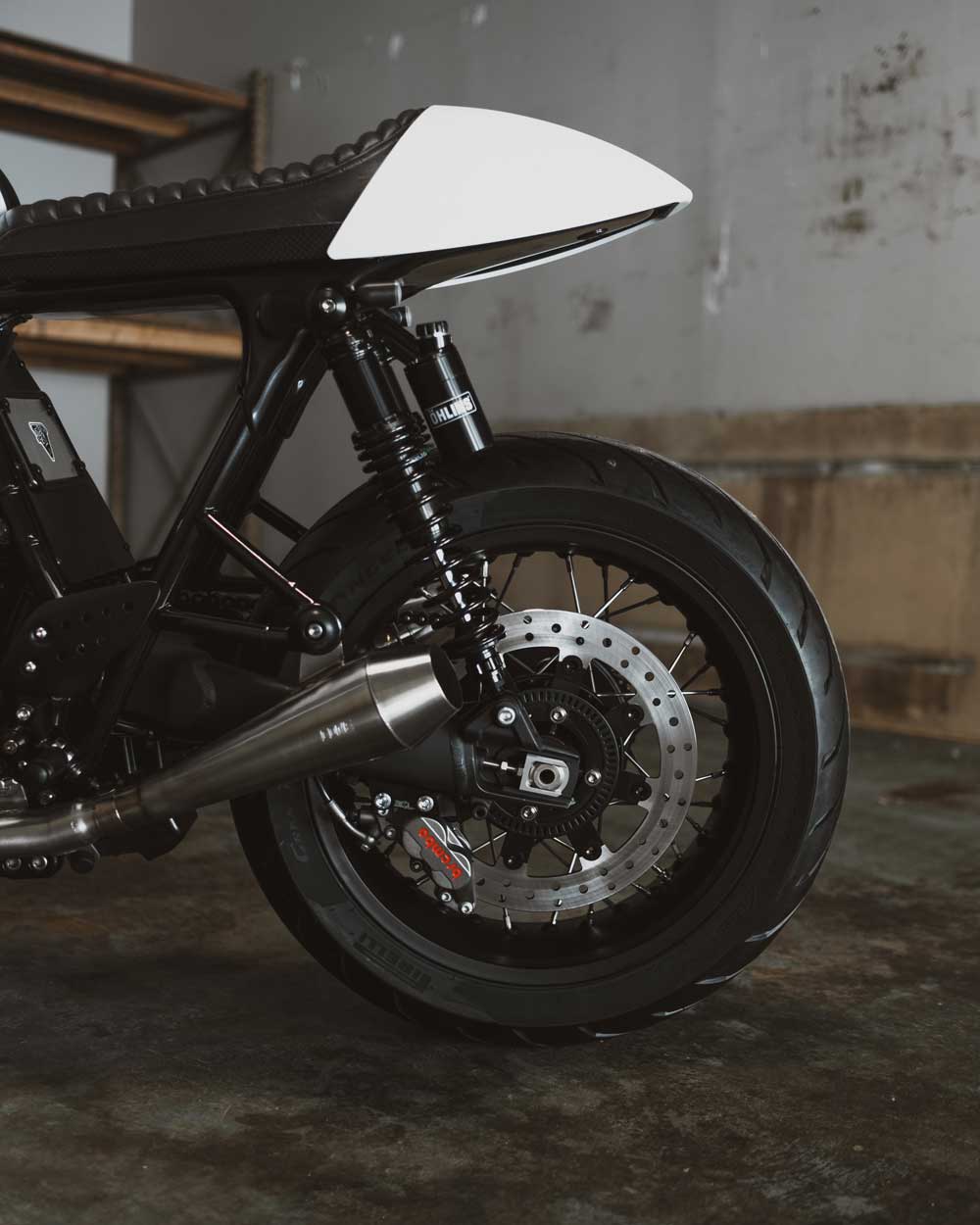 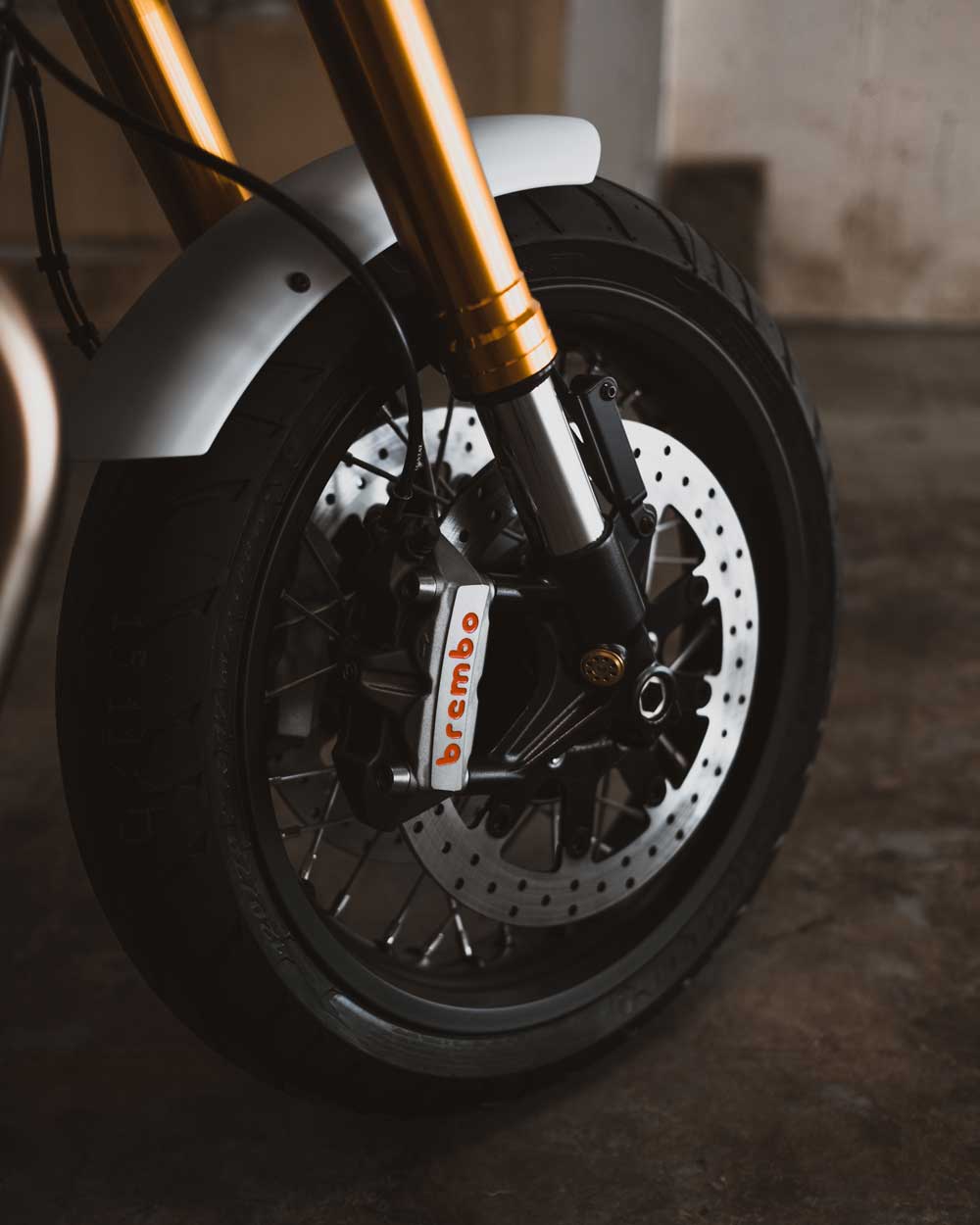 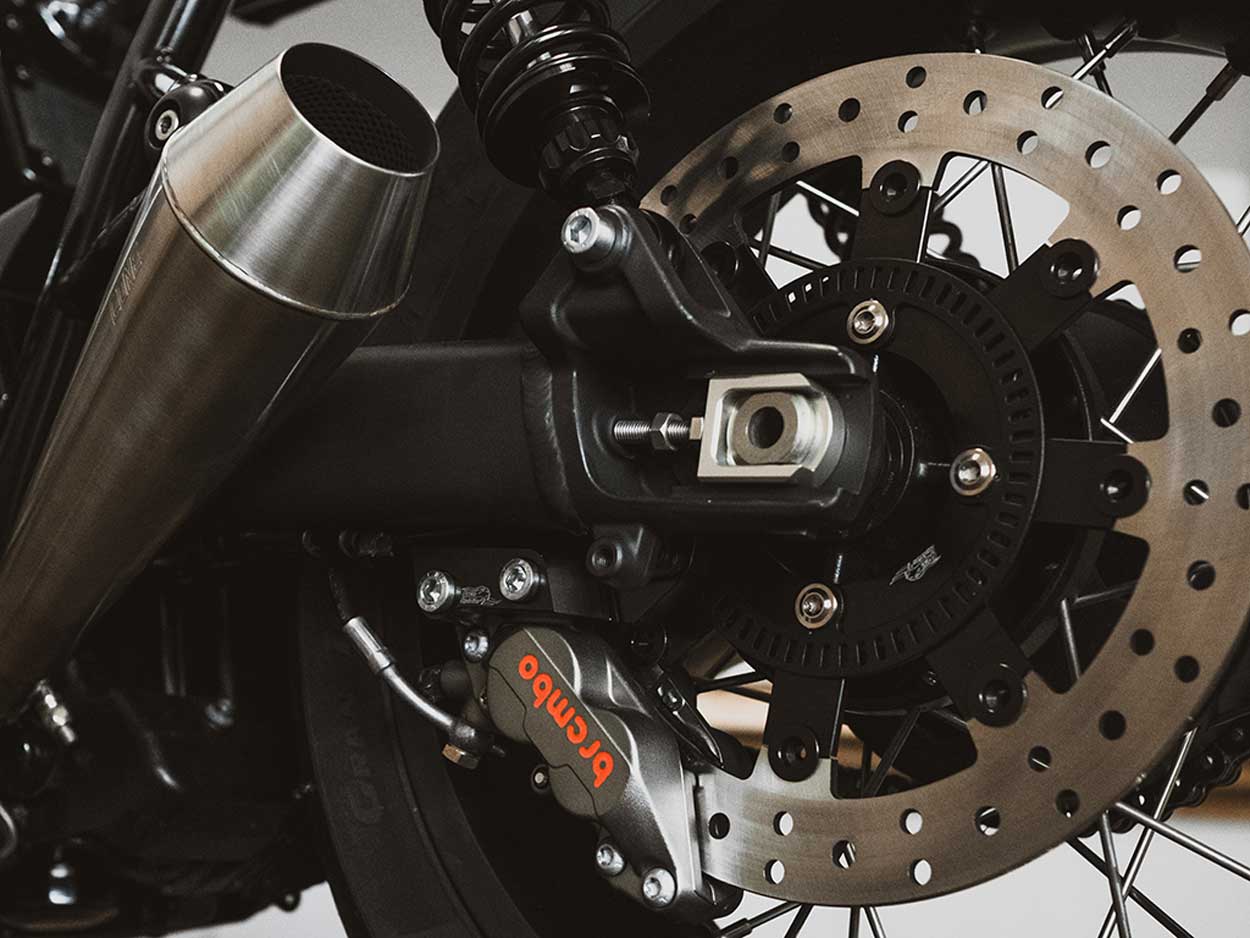 The wheels, brakes and suspension have all had some attention on this Thruxton, with the stock rear shocks being ditched in favour of a set of Ohlins Blackline TR965’s. The stock wheels were retained though stripped, powder coated black and rebuilt using Buchanan spokes. These were then fitted with an Outtex tubeless conversion and shod with a pair of Pirelli Angel GT tires, and finally fitted with Free Spirits rotors both front and rear, with the rear getting a 310mm rotor and a Brembo calliper. 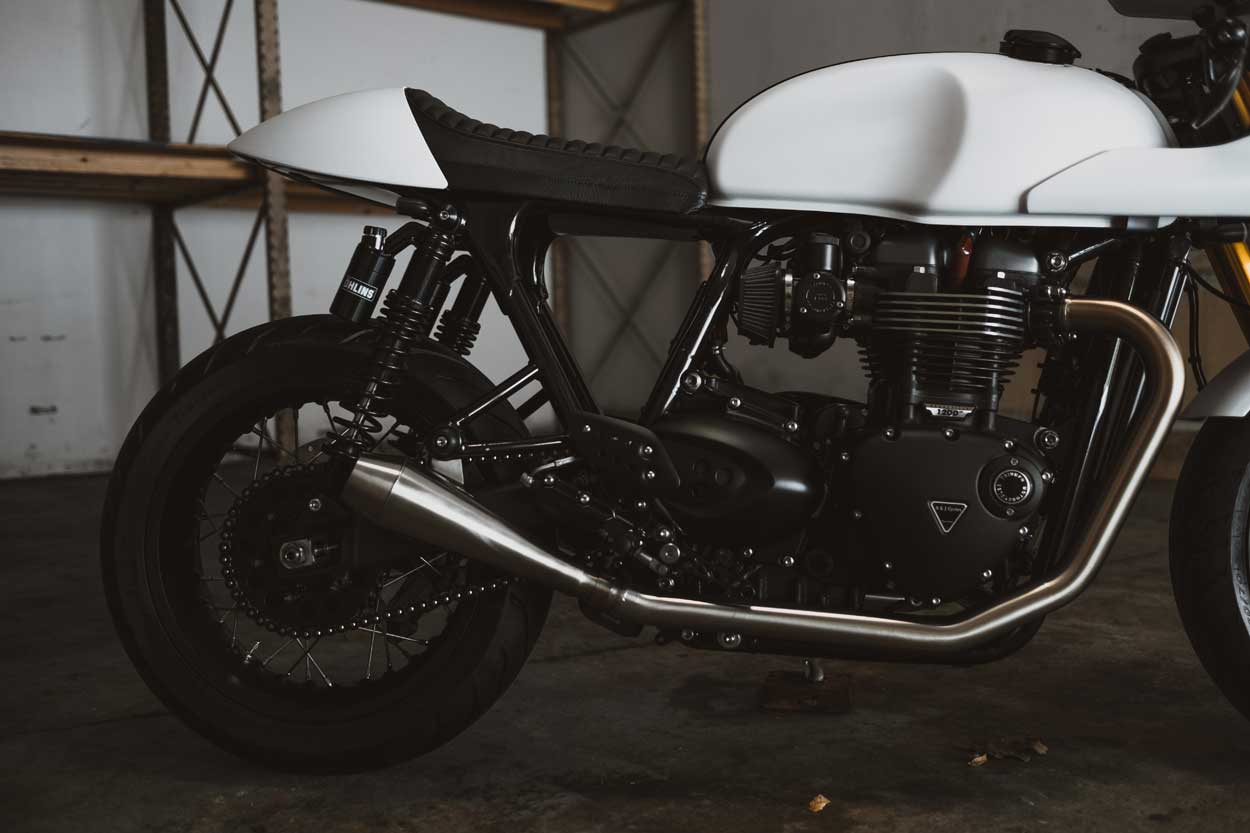 The exhaust on this Thruxton R comprises of a set of Arrow headers and Cone Engineering Shorty mufflers, which when combined with that Power commander 5 and the A&J Cycles Sprint Pod Filters and breather kit, allows this Thruxton to make 94Hp at the rear wheel. Add to that this R is now a lot lighter, and stops a lot better than stock, the result is one fun machine to ride! 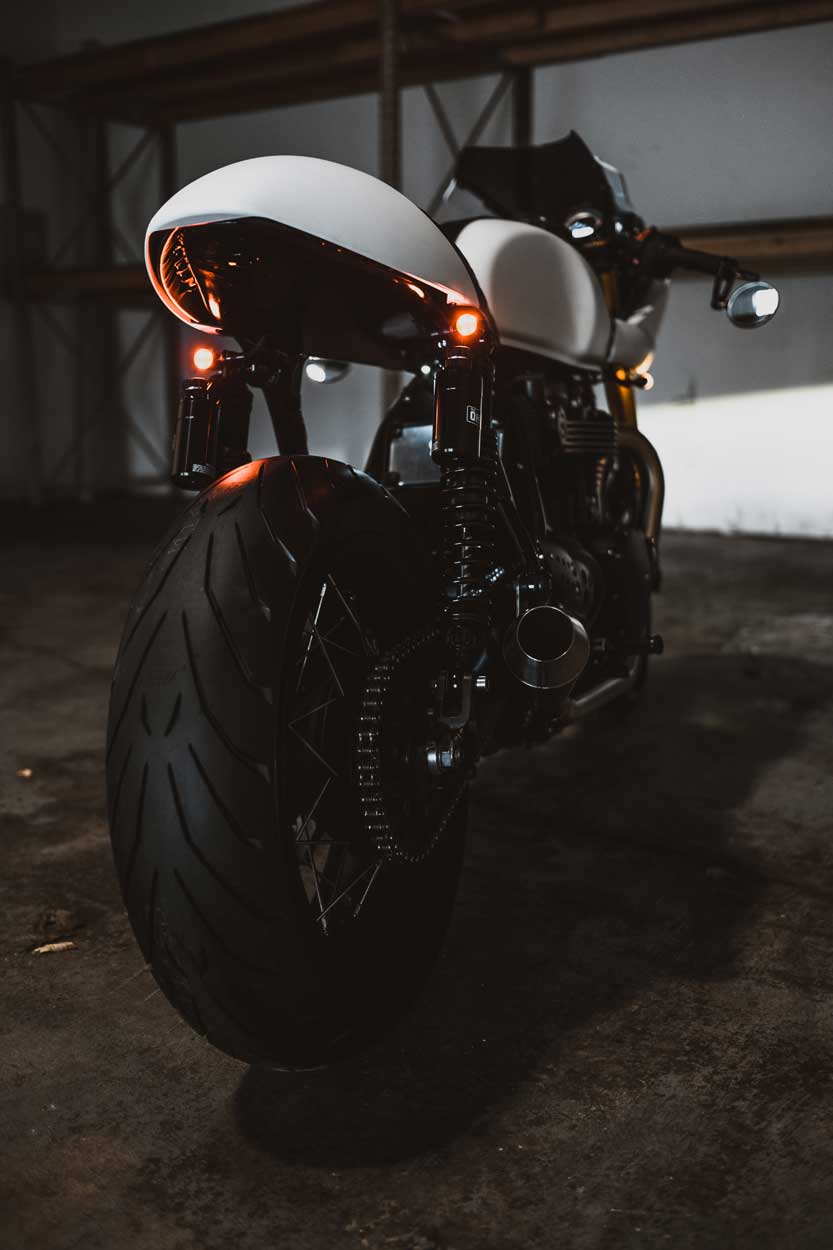 Finishing details on this build include powder coated side-covers and Cerakoted swing arm, Hightechspeed X-Arc turn signals and a black Motone Monza gas cap. But what’s the colour of this Thruxton you may ask, well that’s Arctic Silk White, which I believe is a Ducati Panigale colour.