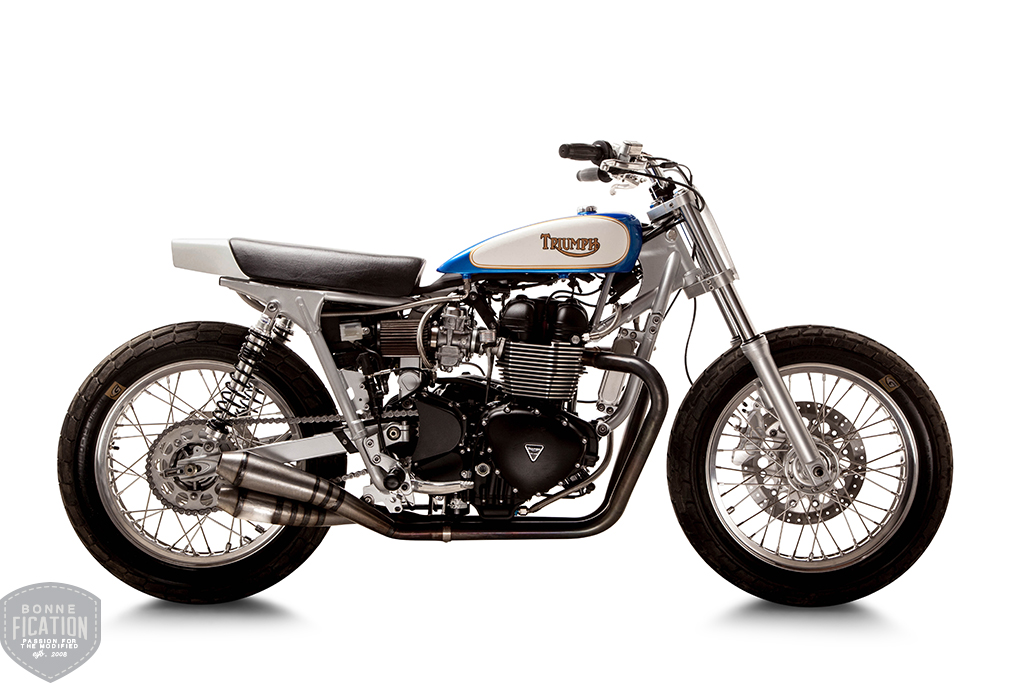 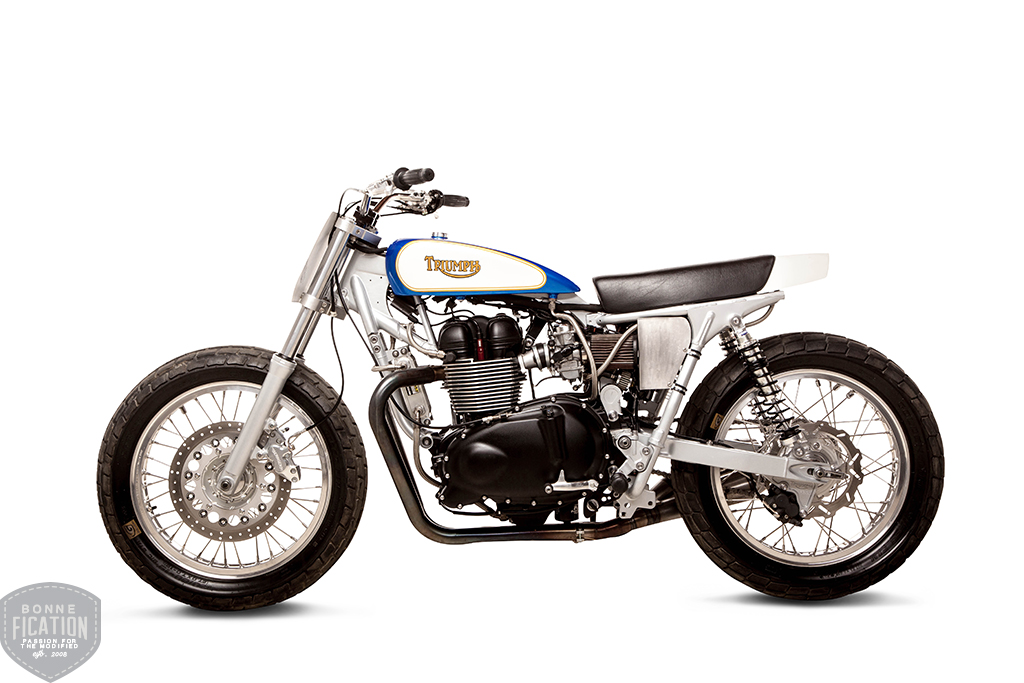 The word ‘Tracker’ is often thrown around, much in the same way as the word ‘Hipster’, with many clearly not knowing what either a Tracker or a Hipster is, or indeed what either should look like. Unlike Triumph, I don’t care what a Hipster is, or what it means to be, or not to be one.

What I do care about are motorcycles and especially Tracker’s, and in particualr any Tracker which roles out of Richard (‘godfather of the Street Tracker’) Pollock’s workshop, machines which in my unconsidered opinion, are the purist definition of the word ‘Tracker’. 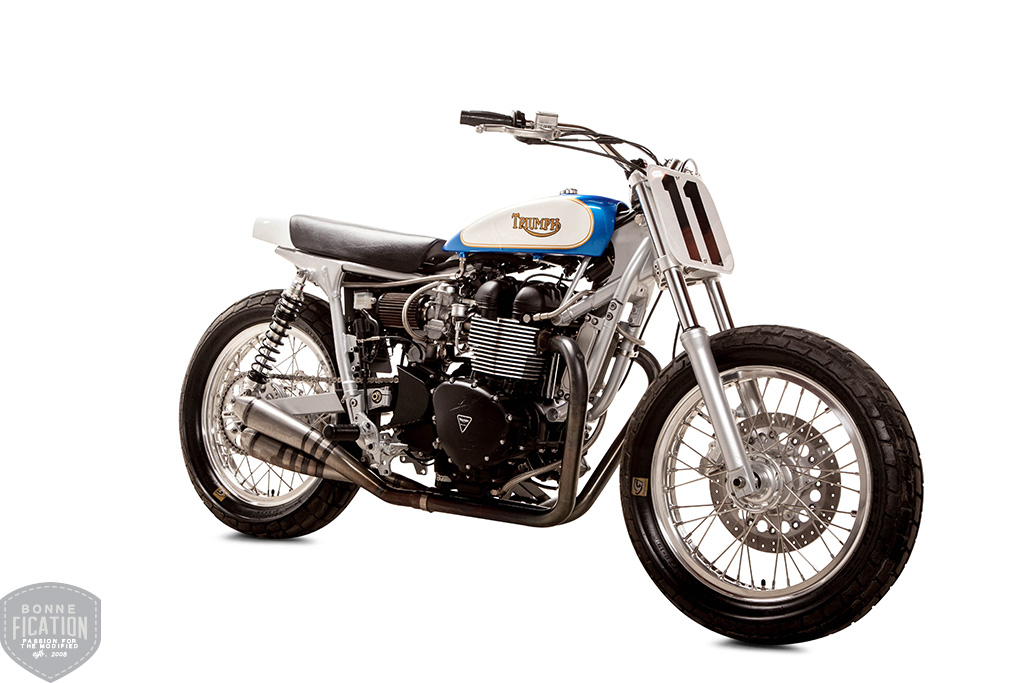 There is a saying, ‘a prince among men’, meaning; one in many will stand out from the crowd– one such prince, is a motorcycle built by Richard as a homage to Gene Romero’s 1971 Triumph Team bike, a build which is based on a humble 2015 Triumph Bonneville T100 Black, a build which uses both the original T100 865cc engine and frame, though looking over the bike I suspect little else. 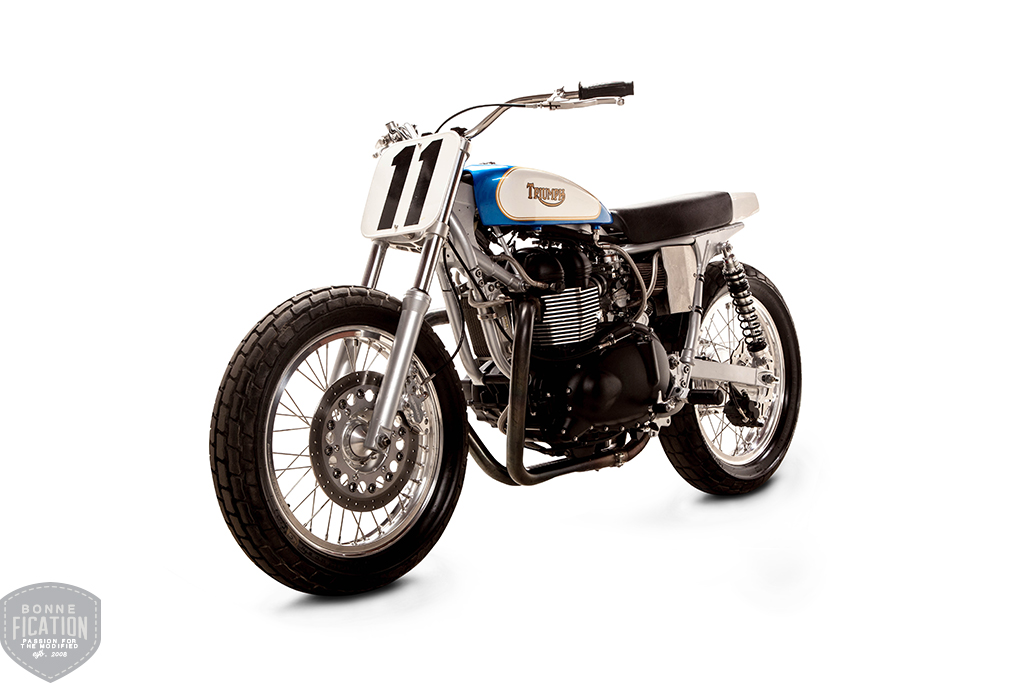 Notable features include a set of 19 inch wheels fitted with Golden GT 267 (130/80-19) and GT 268 (140/80-19) flat track tyres,  a custom Trackmaster fuel Tank and seat-cowl, which you will note is in no way similar to the popular XR750 seat cowl which many believe to be the only option when building a Tracker, which has been fitted to a chopped silver painted frame. 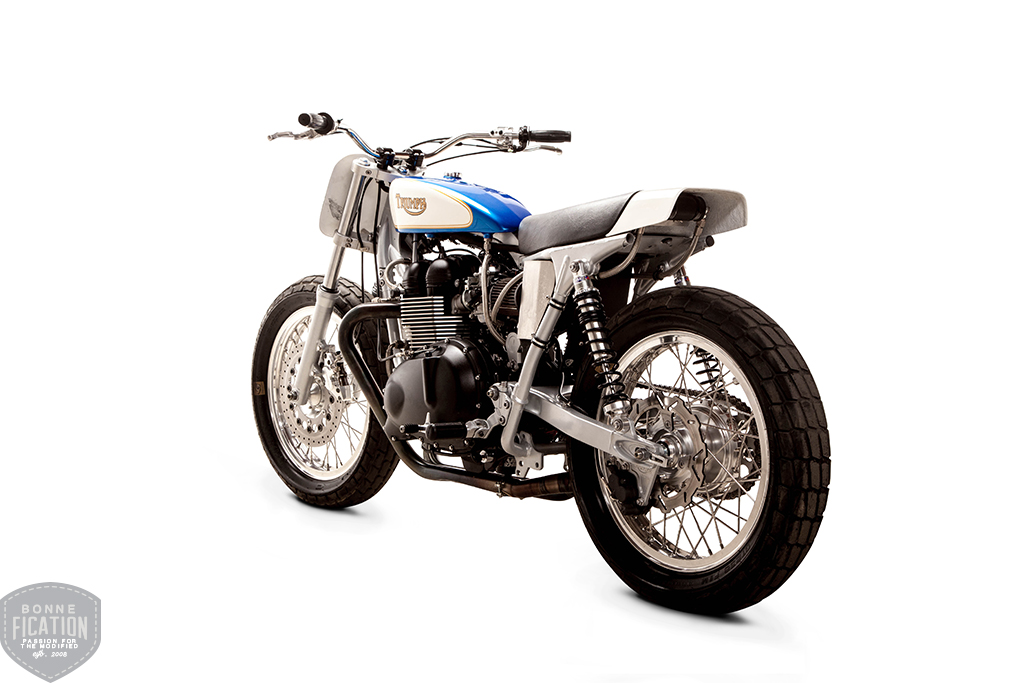 The custom and off-the-shelf accessories have been brought together to transform a T100 into a near perfect modern replica of Gene Romero’s original 750cc, 72hp,  270lb, Trackmaster framed Triumph Twin… 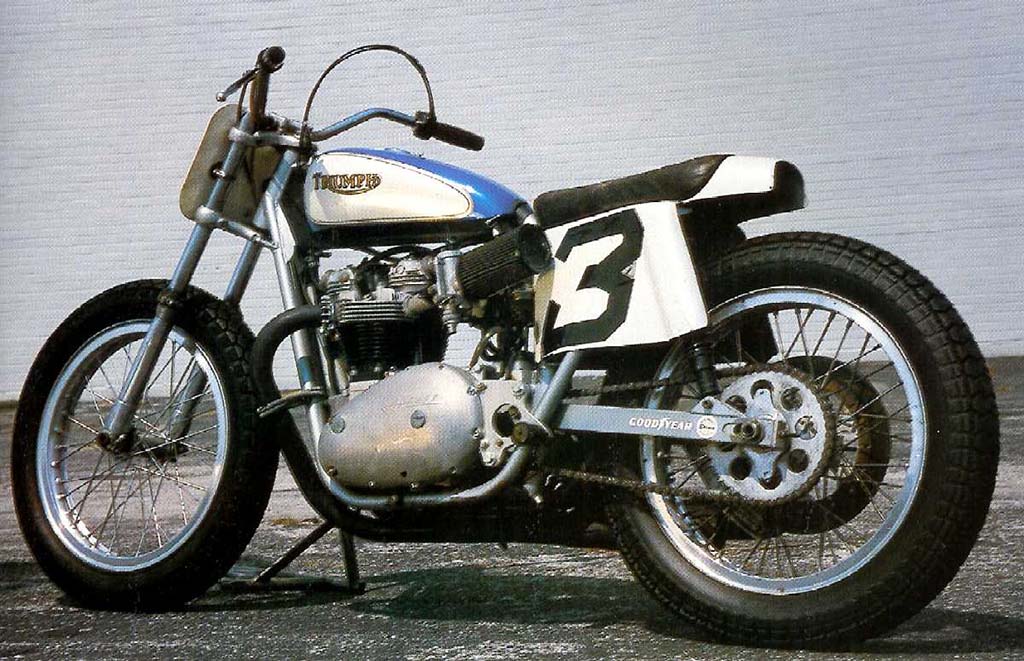 … a motorcycle which was the last classic British Twin to win the AMA National mile dirt-track race in 1972 and 73. 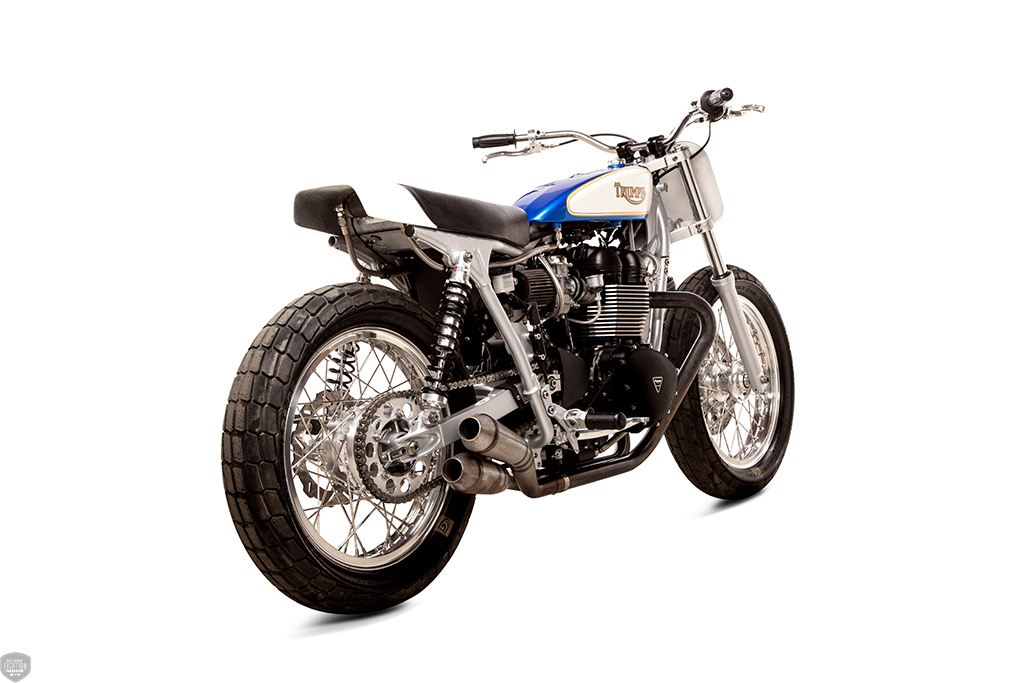 The bike is a collaboration between Mule Motorcycles and the American aftermarket accessories manufacture and web store British Customs, and also features a number of Mule’s extremely “high performance and precision parts”, including Mule’s Tri-Oil Cooler Kit, Mule Swing-arm Spacers and Mule’s 7/8″ handlebars, which are all now available via British Customs.

For those wanting more details on this build, as it seems silly mentioning every nut, bolt and lack of indicators just to pad out the editorial – instead, contact British Customs or Richard Pollock, as Im sure Richard would love to build you one just like it, alternatively why not just purchase the featured bike which is for sale at a rather impressive $35,000 US. 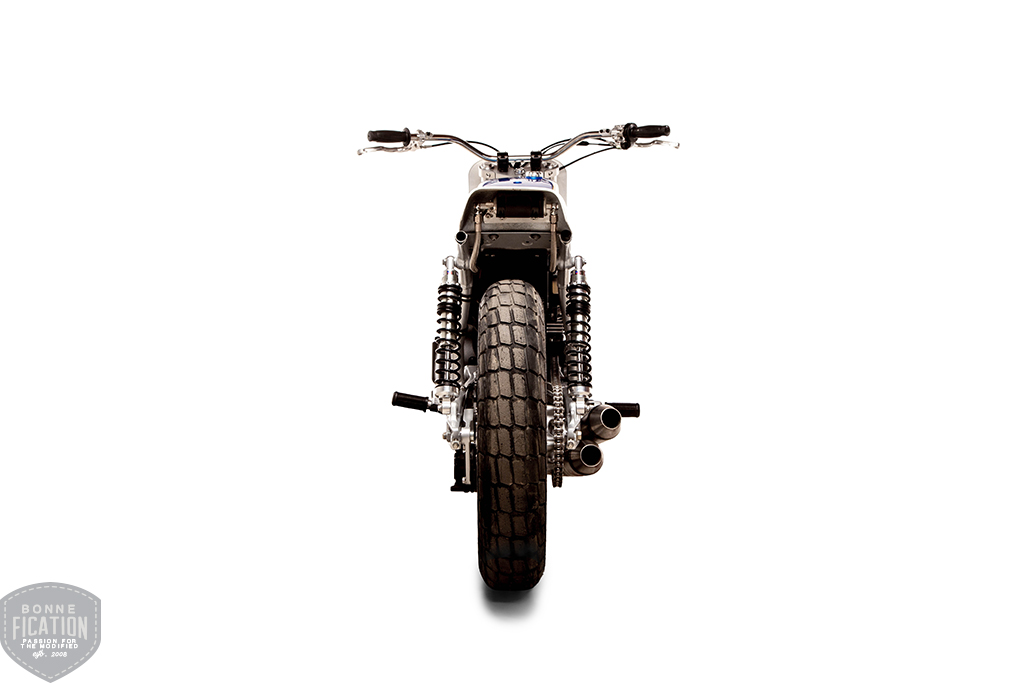