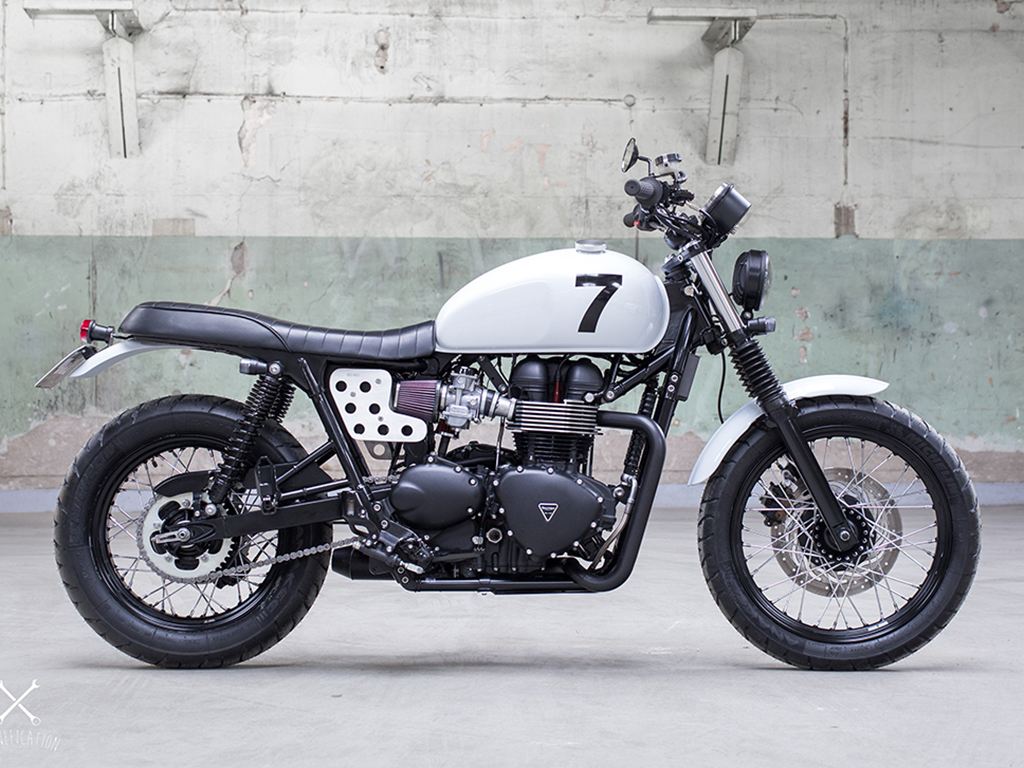 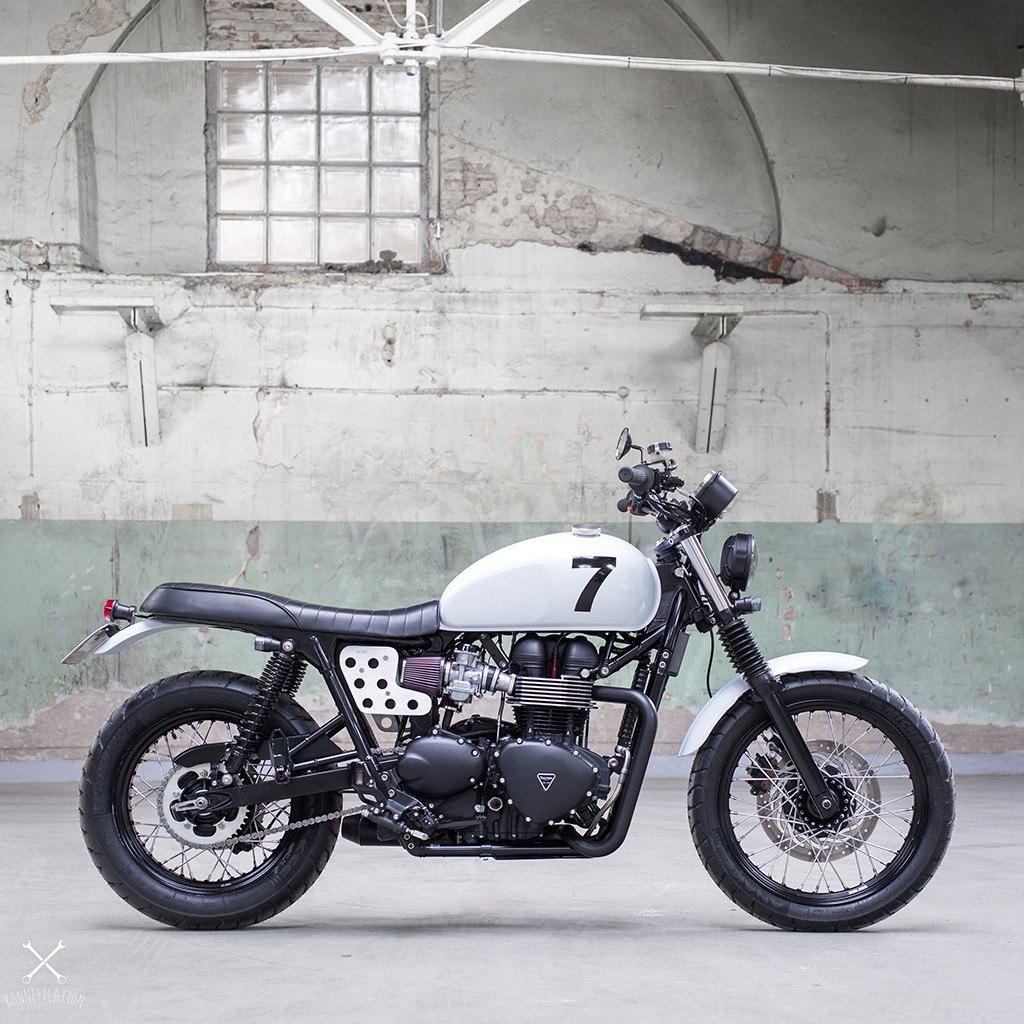 Mikael, Olof and Daniel are the three names behind  MOD moto the Gothenburg, Sweden based bike builders. Modmoto do it all… Brat, Bobber, Cafe, Tracker and of course the ever popular Scrambler. This particular bike was built for Andy Olsson who came to the guys last year with a brand new 2014 EFI Triumph Scrambler, a bike which is a great looking machine straight out of the crate. But this Triumph Scrambler wouldn’t be on Bonnefication if it was left as standard. 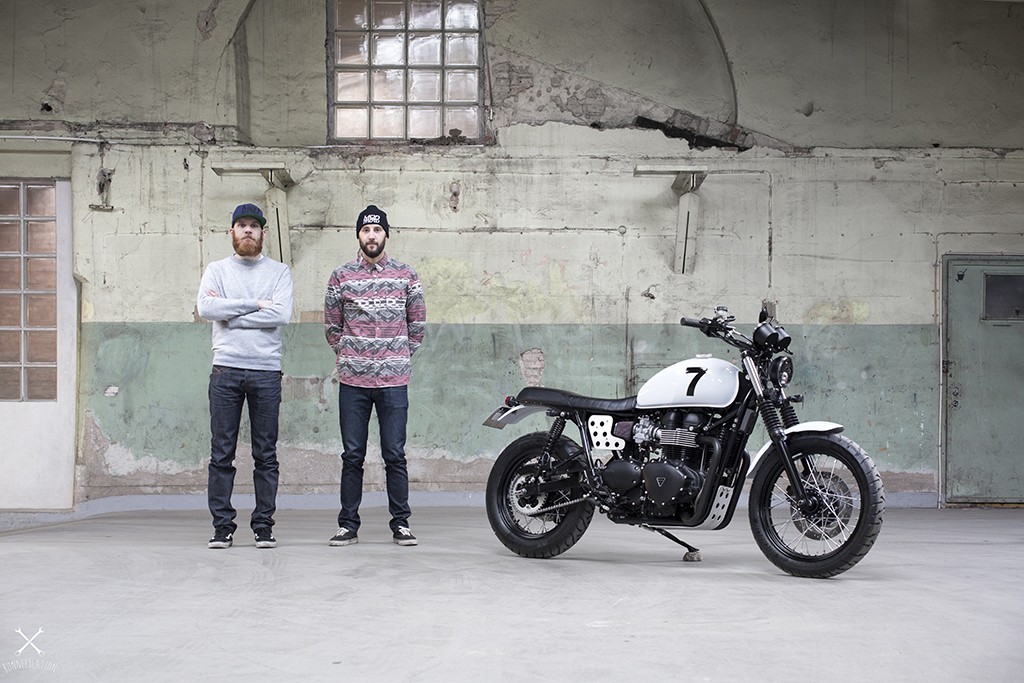 Andy wanted his Scrambler to be a little more Scandinavian in appearance, which to the rest of us means stripped down, minimalistic and functional  (just how we like it). The finished Scrambler also needed to be a practical daily computer, something a Modified Triumph Twin can be, unlike many of the Triumphs classic and retro contemporaries. 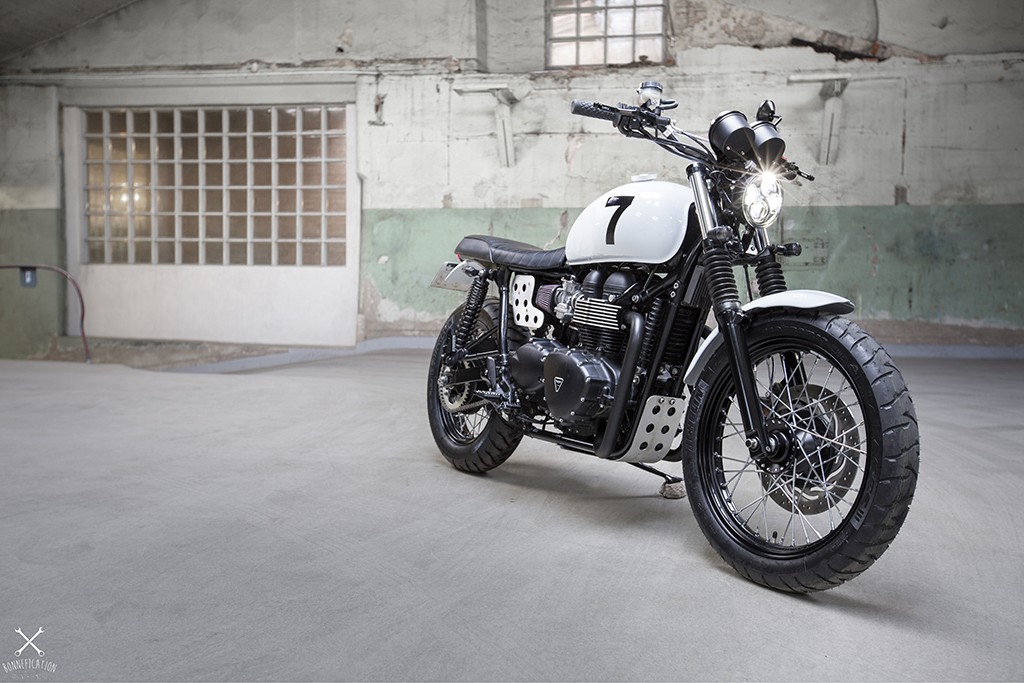 The MOD Moto Scrambler has a nice mix of off-the-shelf parts as well as some key custom part, which will help this Scrambler stand out against the bolt on bikes. Unlike many Scramblers which have been fitted with the more attractive knobblies such as the TK80, Andy’s Scrambler has been fitted with the more practical (for daily commuting) Michelin Anakee 3 dual purpose tyre (110-19/140-17). Other practical upgrades include fitting a JW Speaker 8630 LED headlight, which is a big improvement to the OEM item. 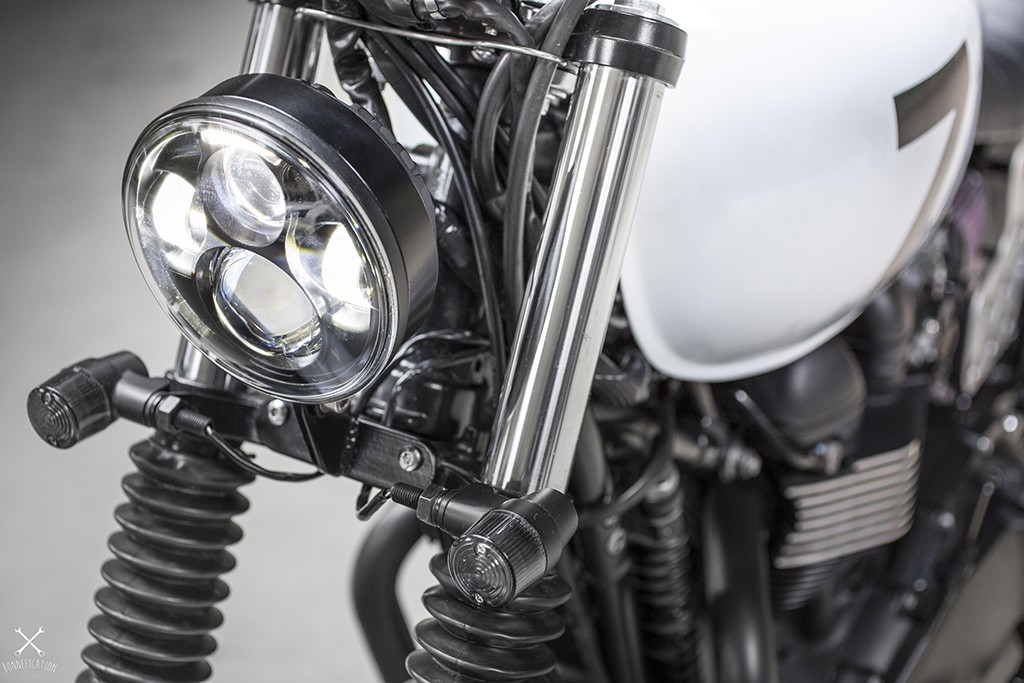 The scrambler also features a braced MX Bars with Biltwell Thruster Grips and Shorty machined levers, The seats is the very nice Texavina low profile leather seat. A semi off-the-shelf seat which can be ‘custom-made….with any color or design for no extra cost’ – check out their website for the full range. 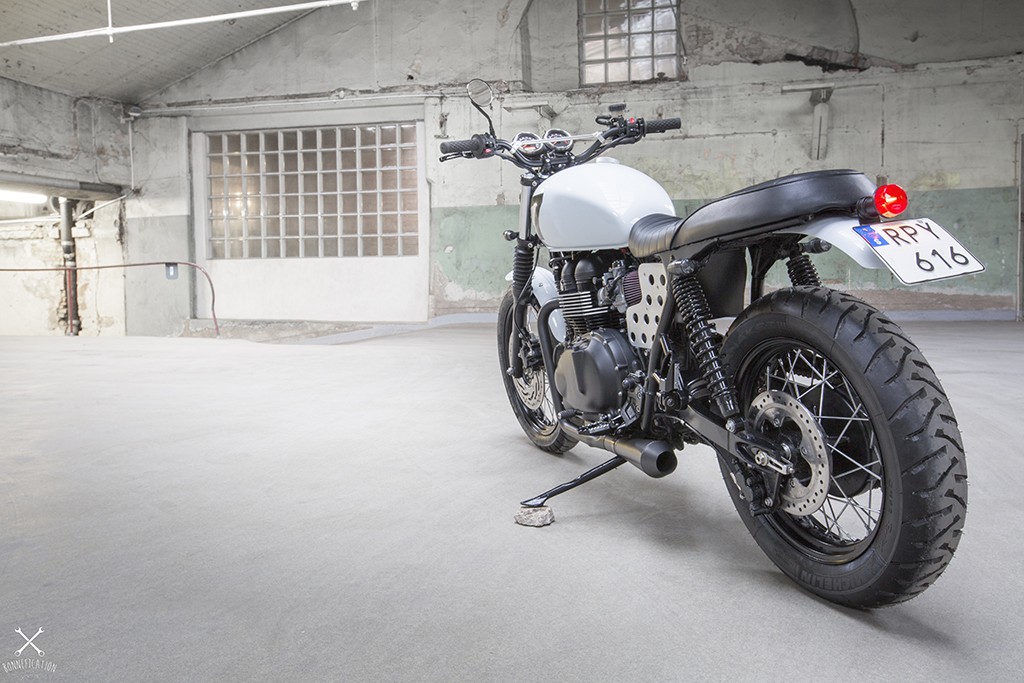 The guys at MOD moto also fabricated a battery and electric box with side panels, which  take styling cues from Scramblers OEM bash guard. Breathing has been tweaked with the fitting of K&N filters and a powder coated,  left mounted, British Customs 2-1 exhaust. An exhaust that was designed for competition use in the Thruxton Cup. Other engine mods include  AI sensors removal and tuning with the  Triumph Twin Power ECM map giving the bike a 40% increase in power. 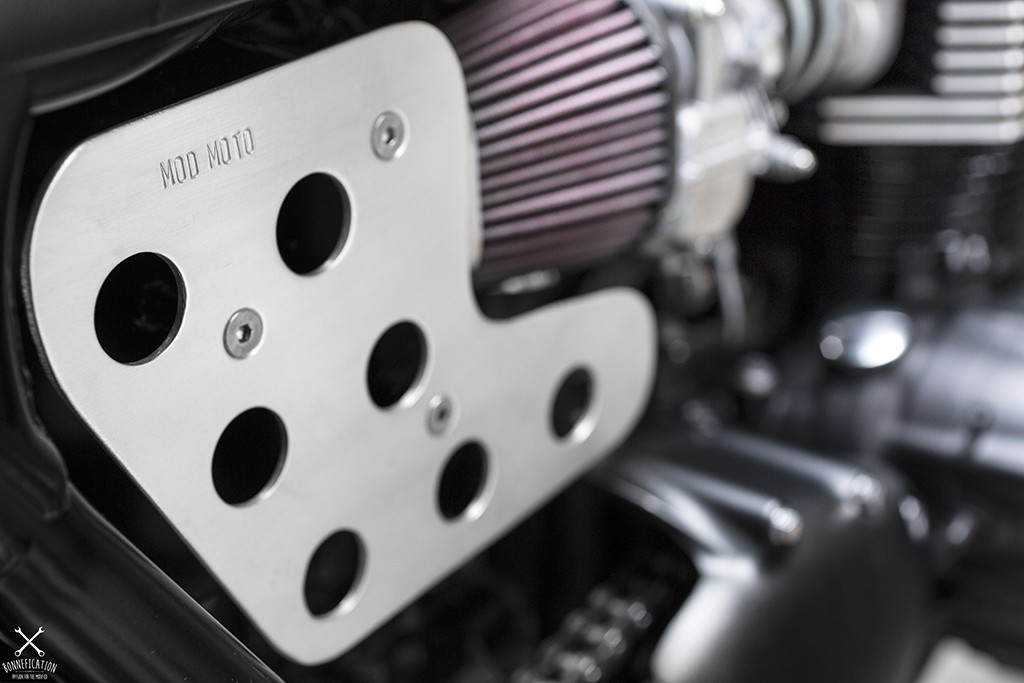 As you would expect there has been a degree of tidying, with the replacing of stock indicators  and moving the rectifier from the front yoke to the frame. Something which should be done before the bikes leave the factory. The bloated rear mudguard and taillight have also been relocated, but in their case to the skip, being replaced with a custom mudguard and a black Easyriders vintage taillight. Finishing the bike off is the light grey metallic petrol tank, which has been fitted with a Motone fuel cap. All the chrome parts have been blacked out or dulled down continuing the Scramblers minimalistic appearance. 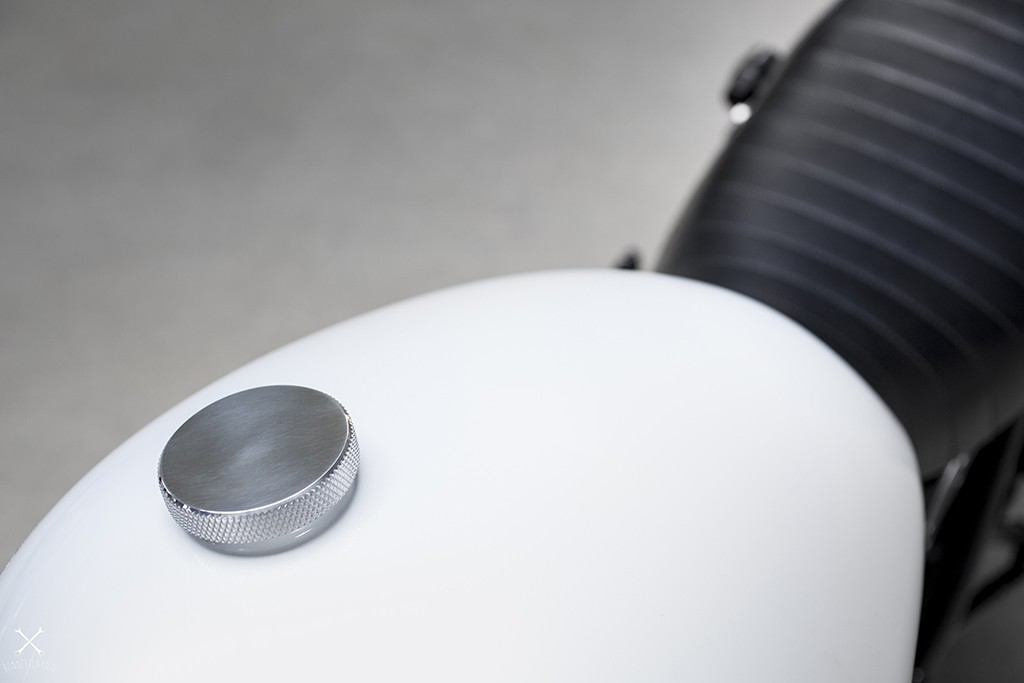 Opinion; Overall another nice build with some custom key features. One being the removal of the rear exhaust hanger (then perhaps its not a Scrambler) and those aluminium side panels are really nice. A few items I would adjust or change is the stock speedo, swopping that for the Motogadget clocks and moving the headlight back a bit so it doesn’t stand out so much. Also I’m not sure on the positioning of the front turn signals with the JW bottom mounted light, just looks a little ugly. Also the bolts on the turn signals need shortening and covering with the rubber boots salvaged from the OEM items. But these are minor issues. 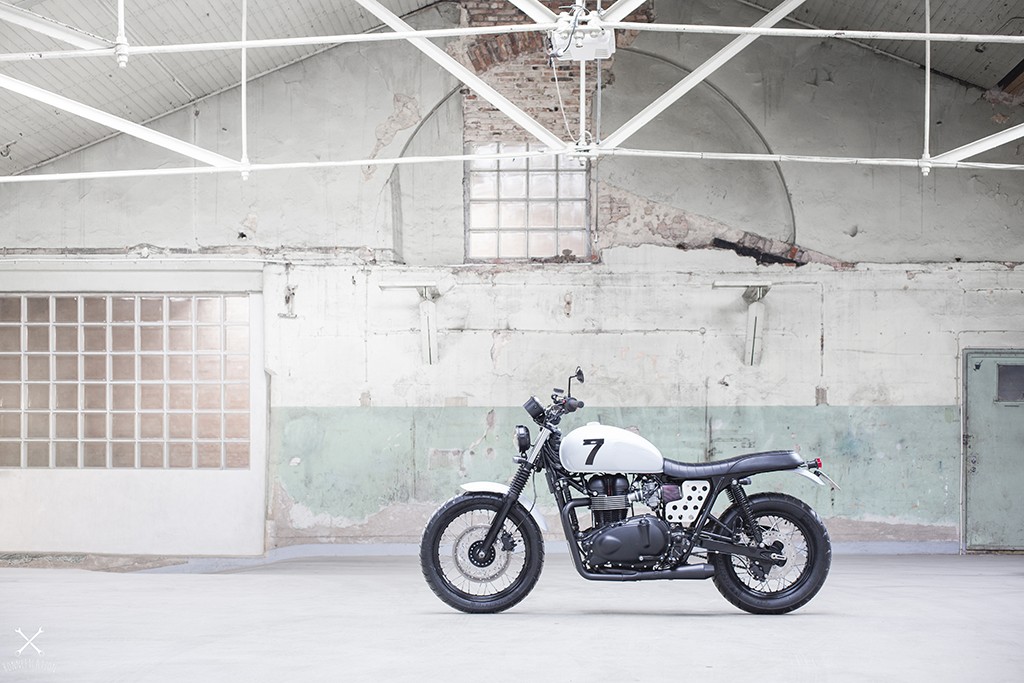