Motolegends, the Guildford based retro clothing specialist, has recently created a replica of the customised Triumph Bonnevilles that David Beckham and his pals rode up the Amazon  last year. The bike is going to be given away at the NEC later this year, in a free prize draw. 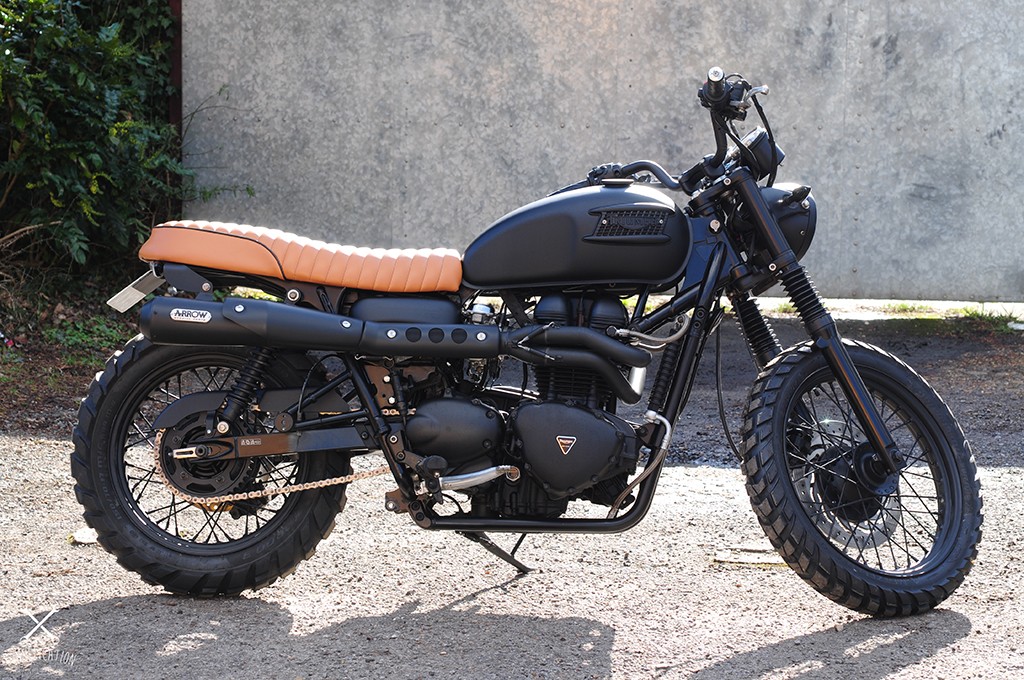 Many people assumed that the bikes they rode were Triumph’s latest Scrambler model; and that was because, like the Scrambler, those bikes wore a high-level, off road, Arrow exhaust. But, in fact, the starting point was nothing other than a humble Bonneville T100, a bike that Bonnefication got the exclusive on last year. 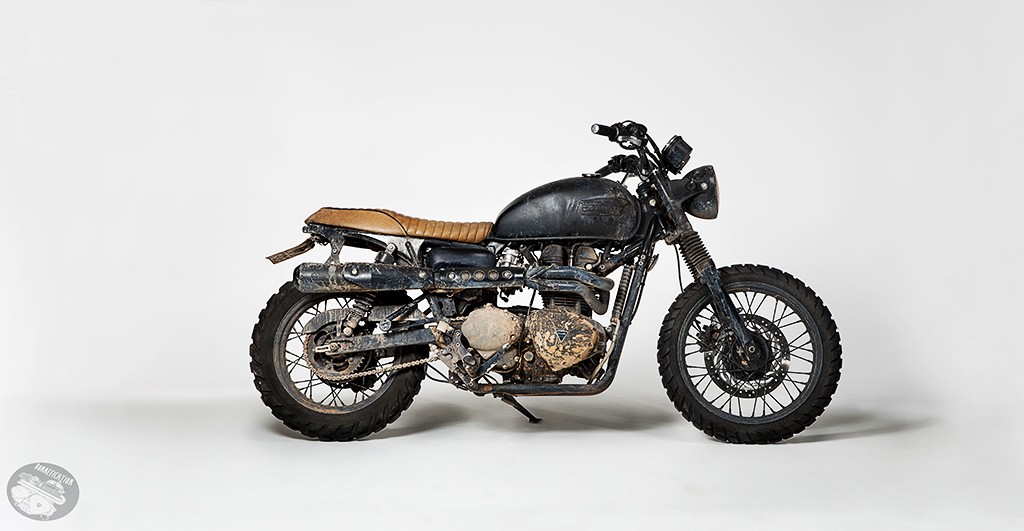 Motolegends acquired their donor bike, a 2001 model, from a local ex-policeman. Even though it was over 10 years old, it had been meticulously looked after, and so presented an excellent starting point for the project. The build was actually incredibly simple, and although the end result is quite dramatic, the work is well within the scope of any budding ,‘bike-shed’ mechanic. 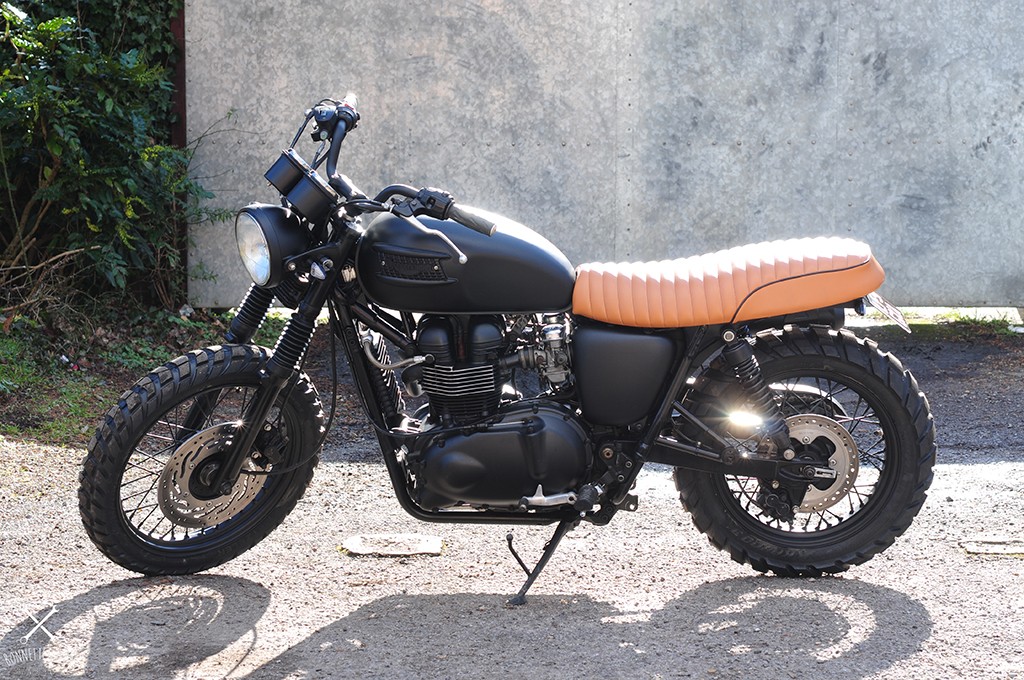 Part one was the strip-down. Off came the mudguards, the indicators, the rear grab rail, the exhaust, and so on. What was left was treated to a matt black paint job that included the wheels, fuel tank, engine casing, cylinder head and, handlebars on. The wheels were re-shod with Metzler Karoo 3s as per the original bike; rubber fork gaiters were added, the seat was re-trimmed, and a new rear mudguard and number plate holder was fabricated. 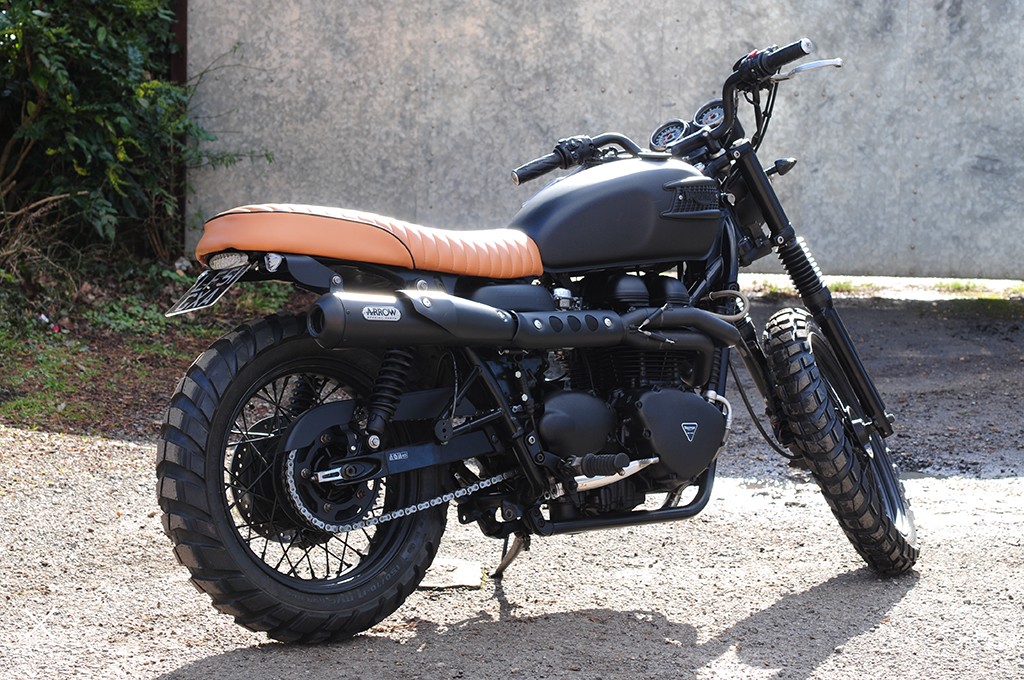 The pièce de résistance, and the most expensive single part on the bike, was the Arrow exhaust. But it only comes in a metal finish, so it was sent off for a black ceramic coating. A bracket was fabricated, to allow it to hang correctly off the side of the bike. Final touches involved moving the rear brake master cylinder to a new location, as the rear brake positioning couldn’t have been at all convenient on the original bikes. 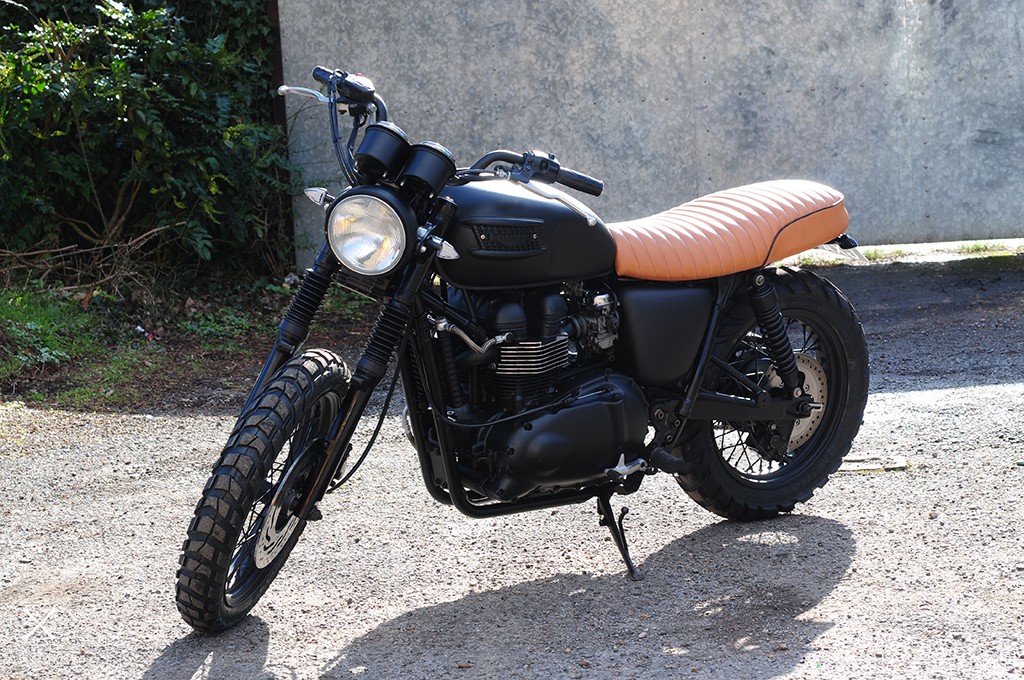 Discrete indicators were then fitted front and back. On the Amazon bikes there were no rear indicators; just front ones. The end result is a bike that somehow seems more than the sum of its parts. There are hugely complicated and intricate builds out there that sometimes fail to hit the spot. This bike is simplicity itself, yet has an undeniable wow factor to it. With the baffle removed, the bike sounds far better than a Bonneville has any right to. Being lighter than the original, it handles well, and the Metzeler tyres give a purposeful look, without any real detrimental effect as far as rideabilty and comfort are concerned. 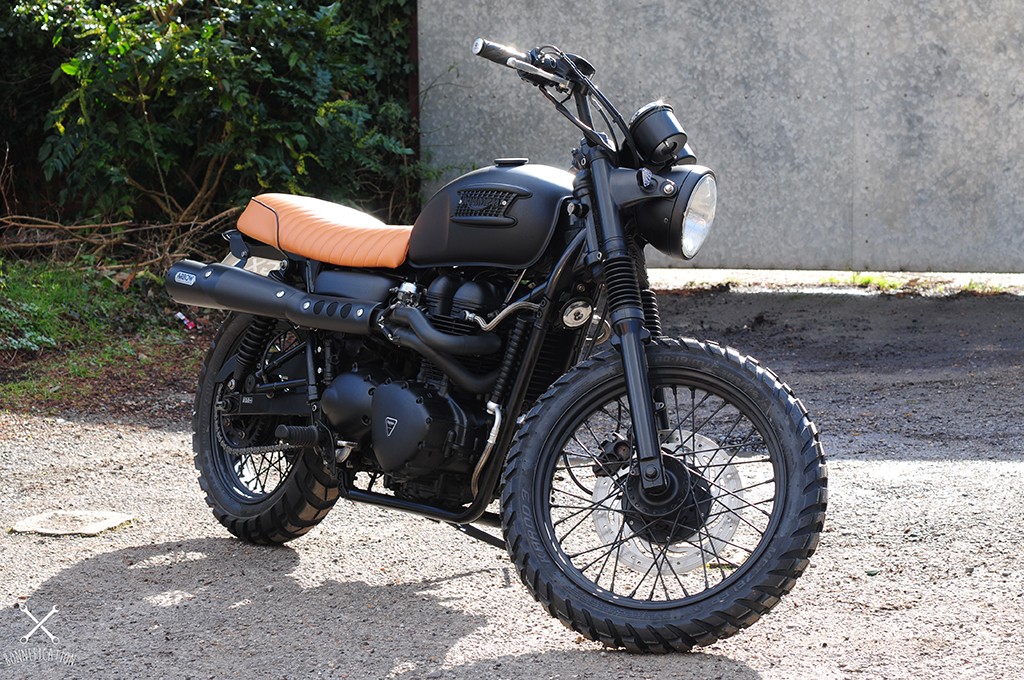 The bike was built by Phil and Graham at FCL in Cranleigh. Including the original bike, parts, paint labour and so on, the build came in at around £10k, although some specialists are demanding £16,000 or more for similar replicas. It’s got to be said that, close as the bike is to Beckham’s, it’s not a slavish reproduction. But it’s certainly not far off! 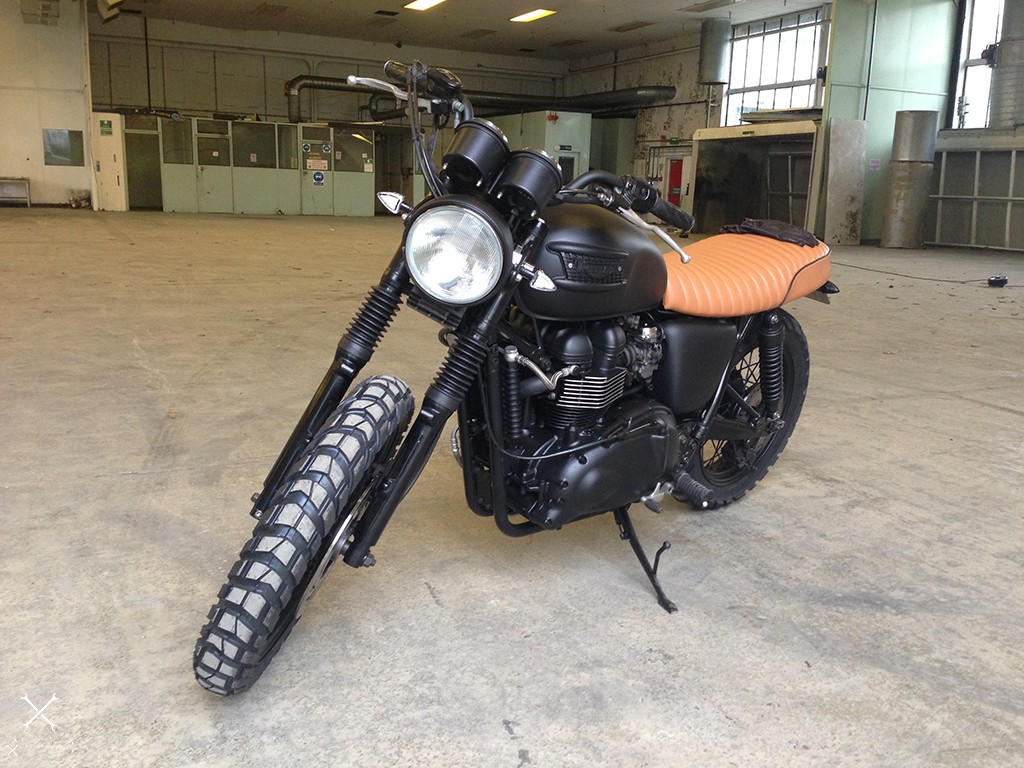 The only part that proved totally elusive was the small, under-handlebar mirror that the Amazon bikes sported. If anyone knows where it’s from, Motolegends would like to know! Beckham fan or not, there’s no denying that the bike has an ineffably cool, laid back vibe to it. And all it takes, if you want the chance to lock it away in your shed, is for you to give your name and address to Motolegends. To enter the competition, just click here.

The bike will be given away at the end of the NEC show this November.

How to create your own Beckham Scrambler in 10 easy steps 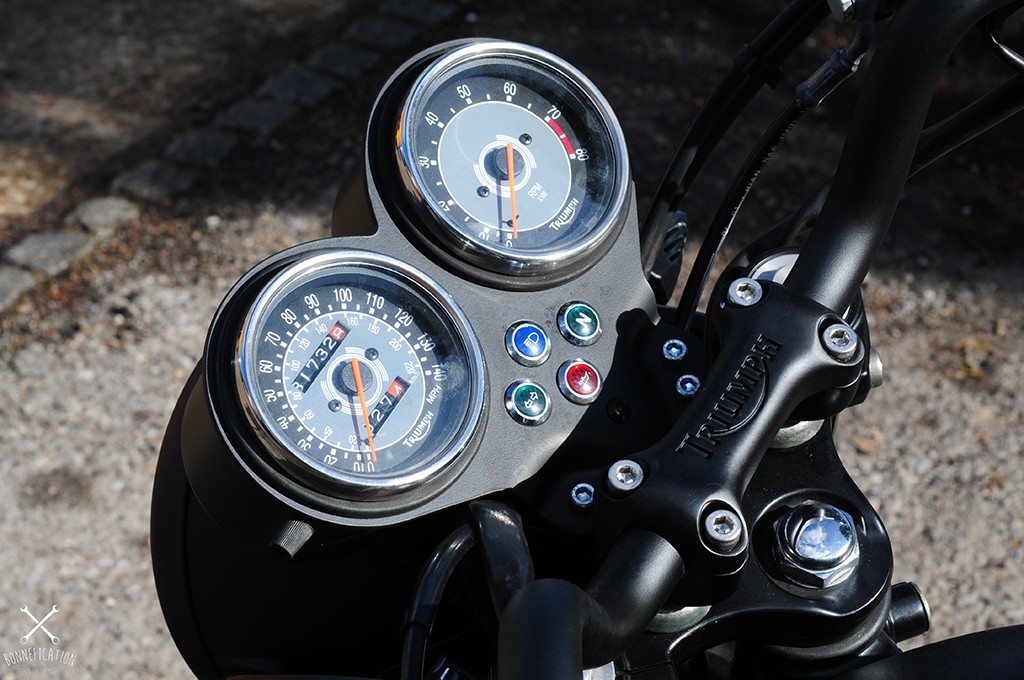 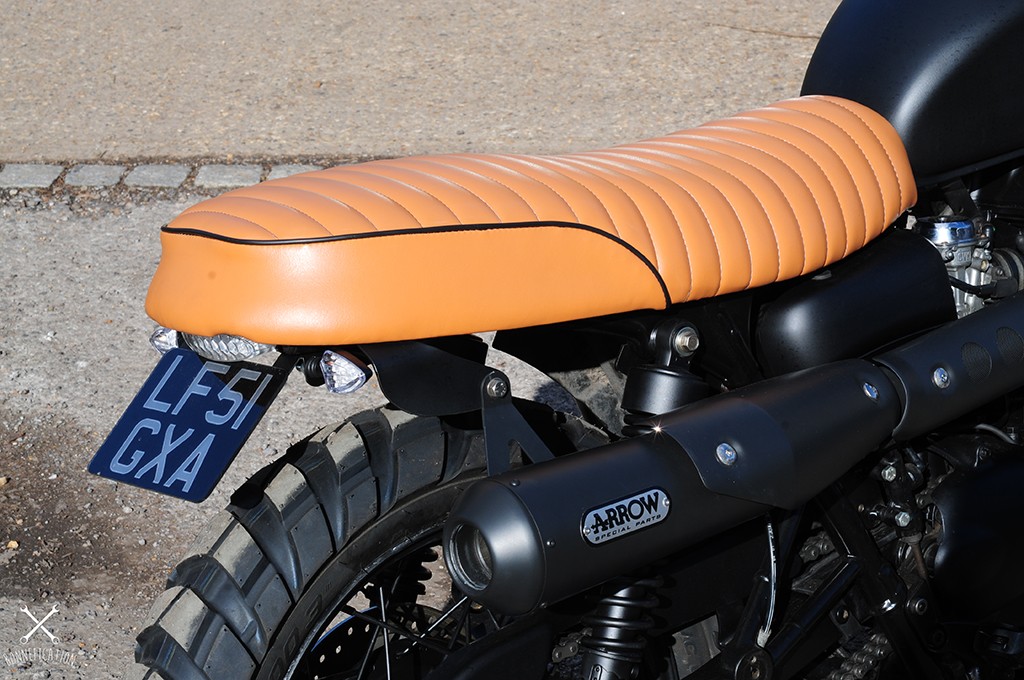 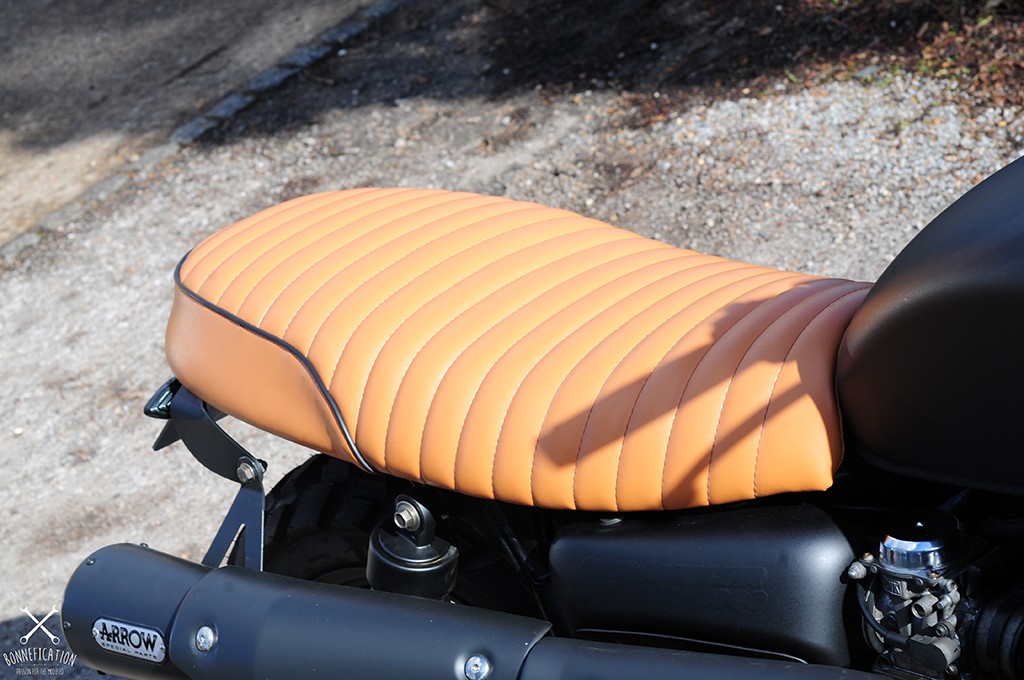 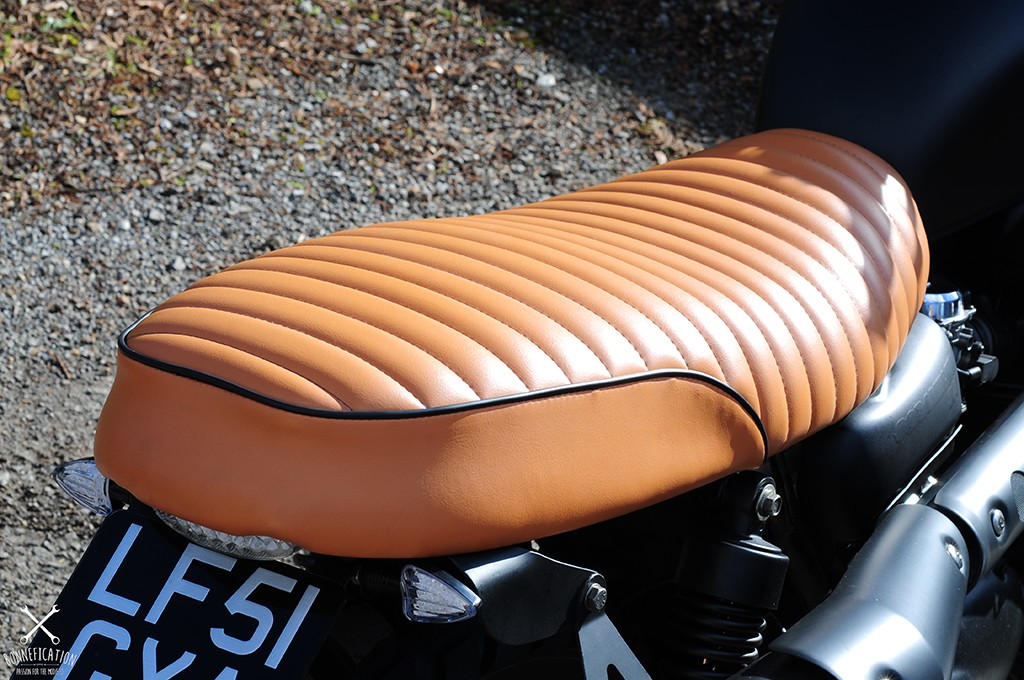 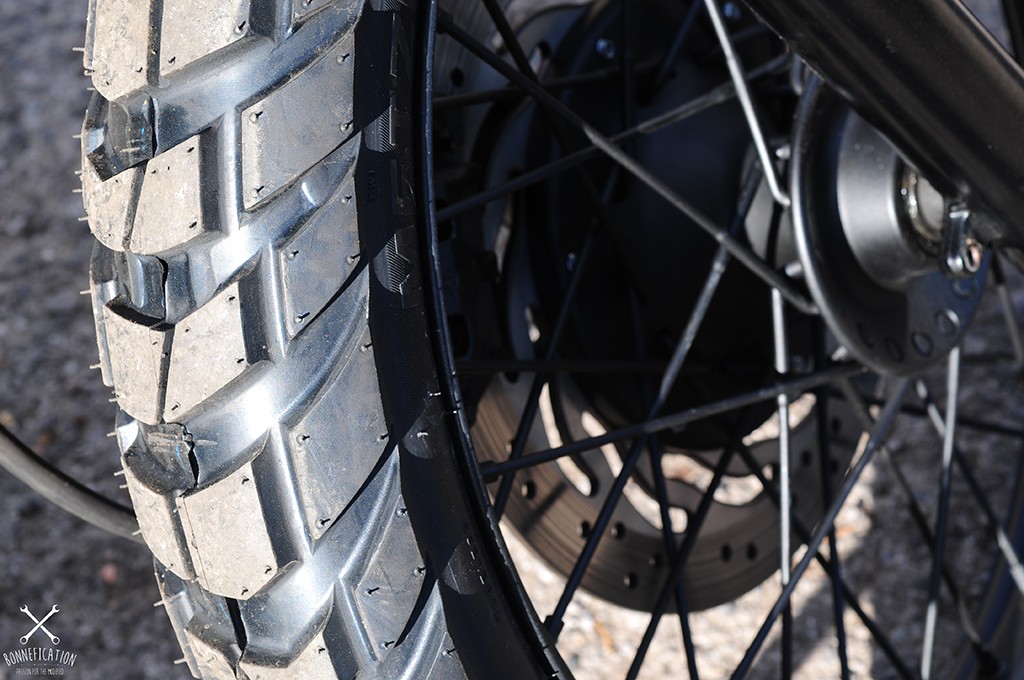 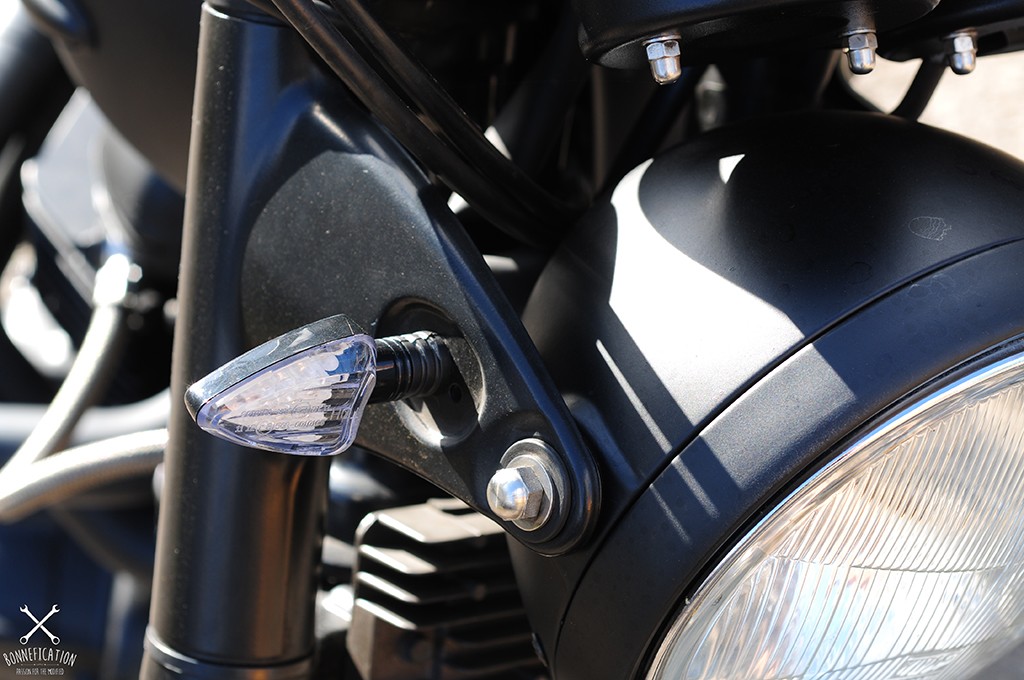 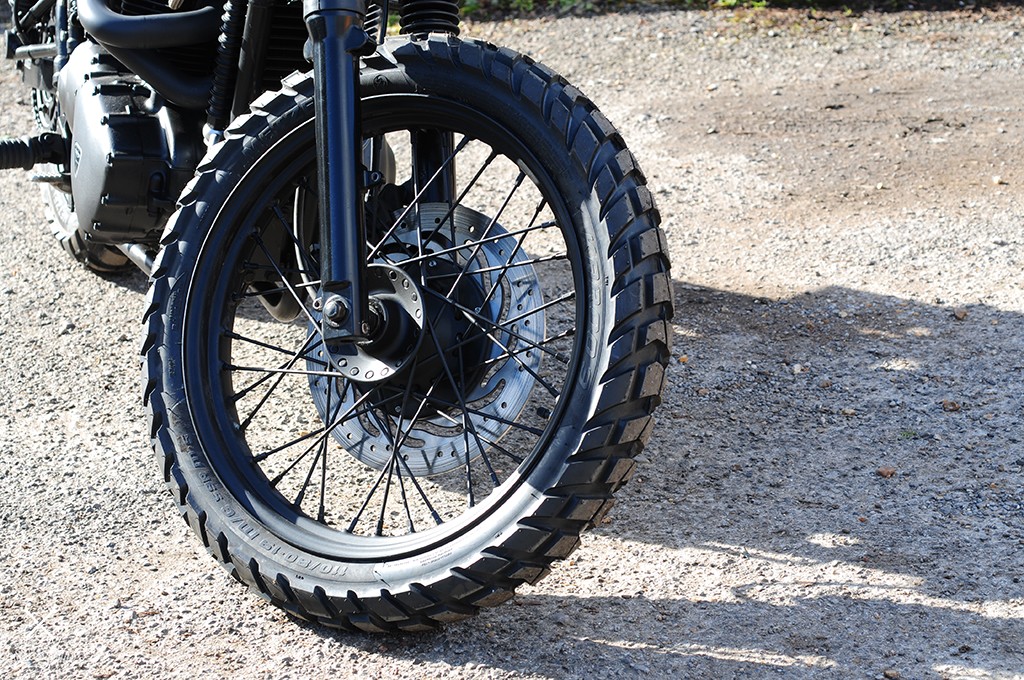 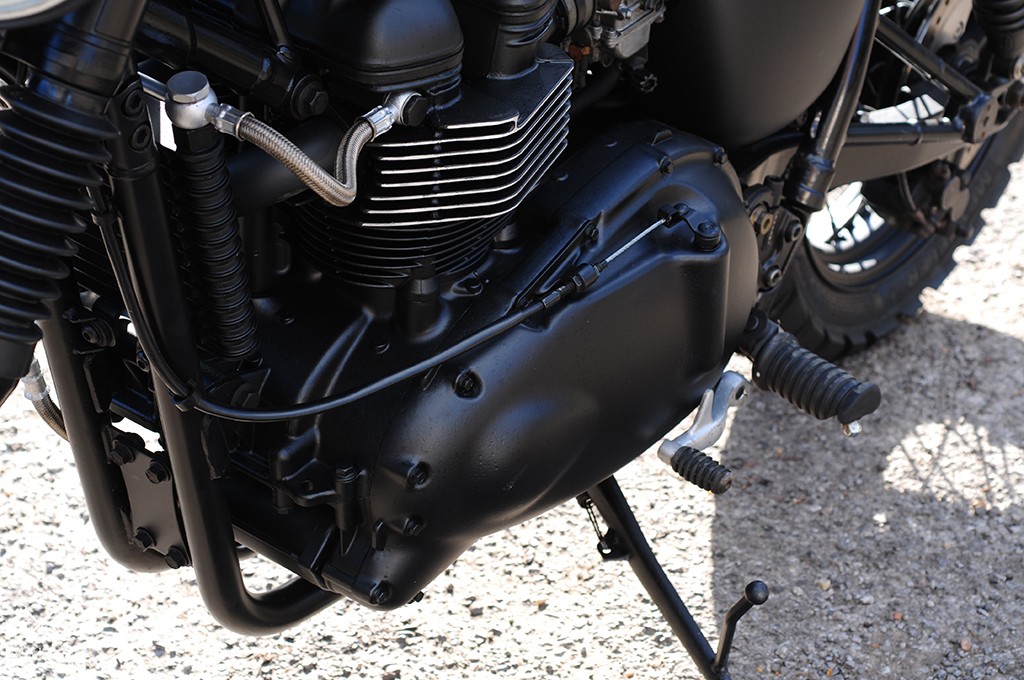 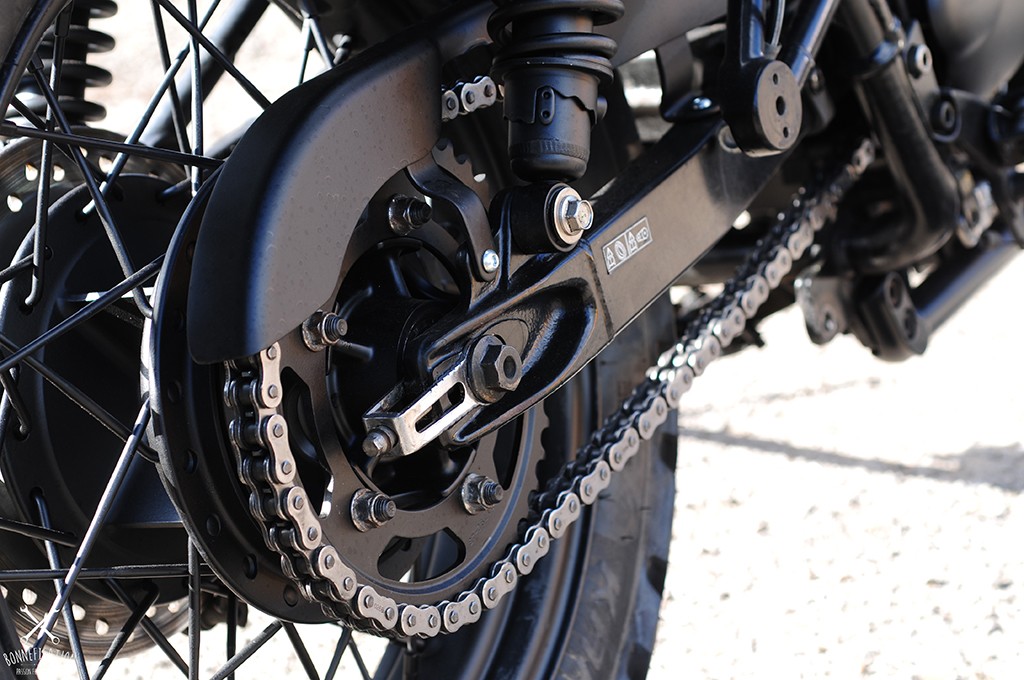 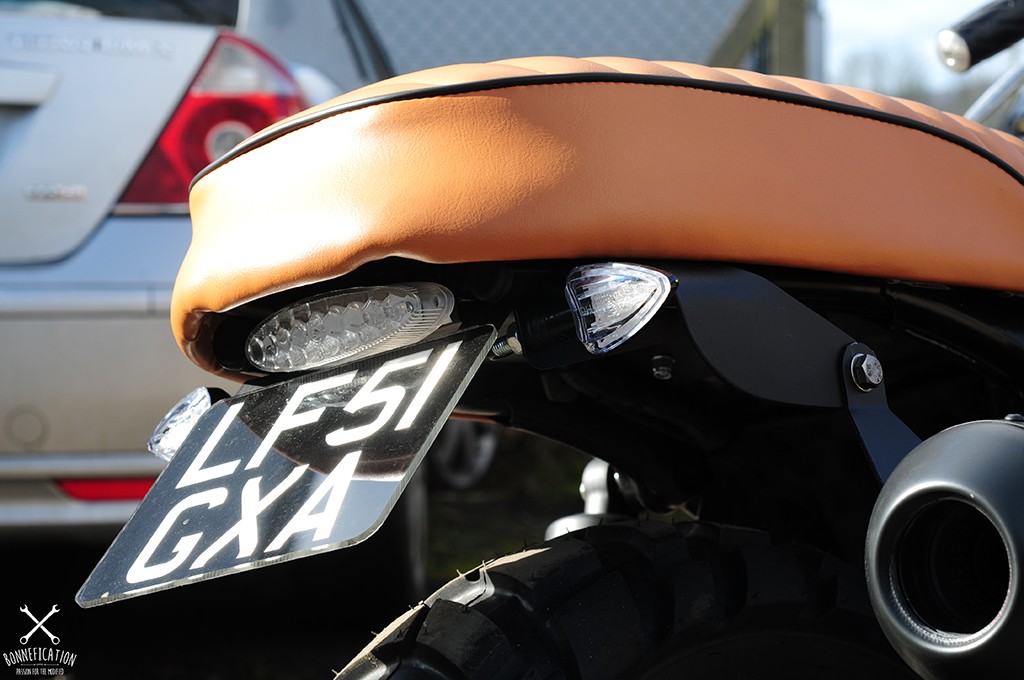 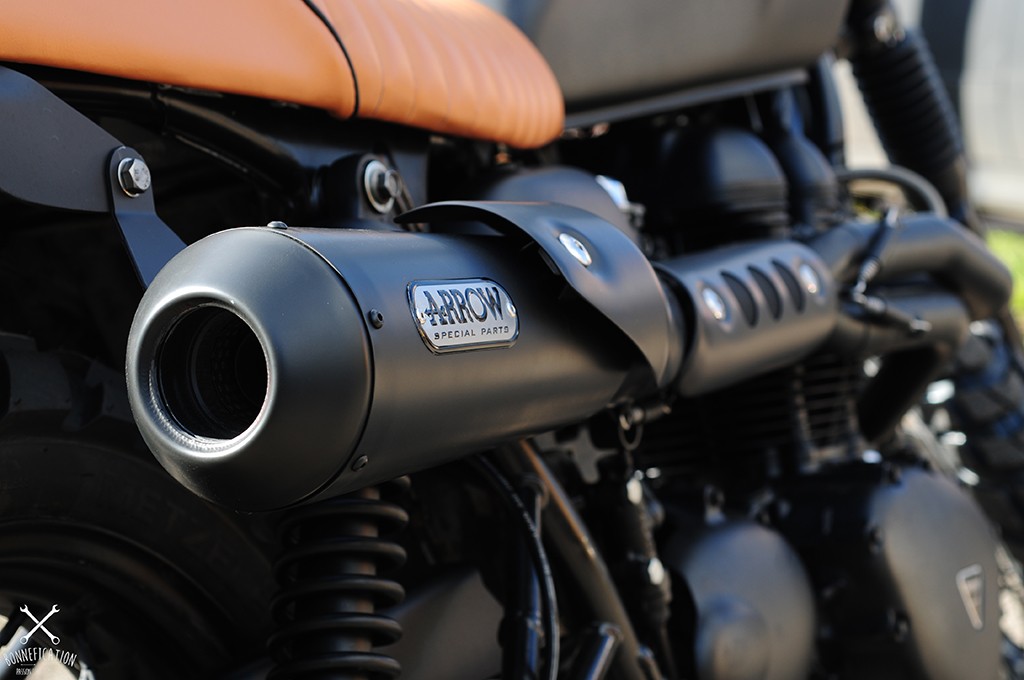 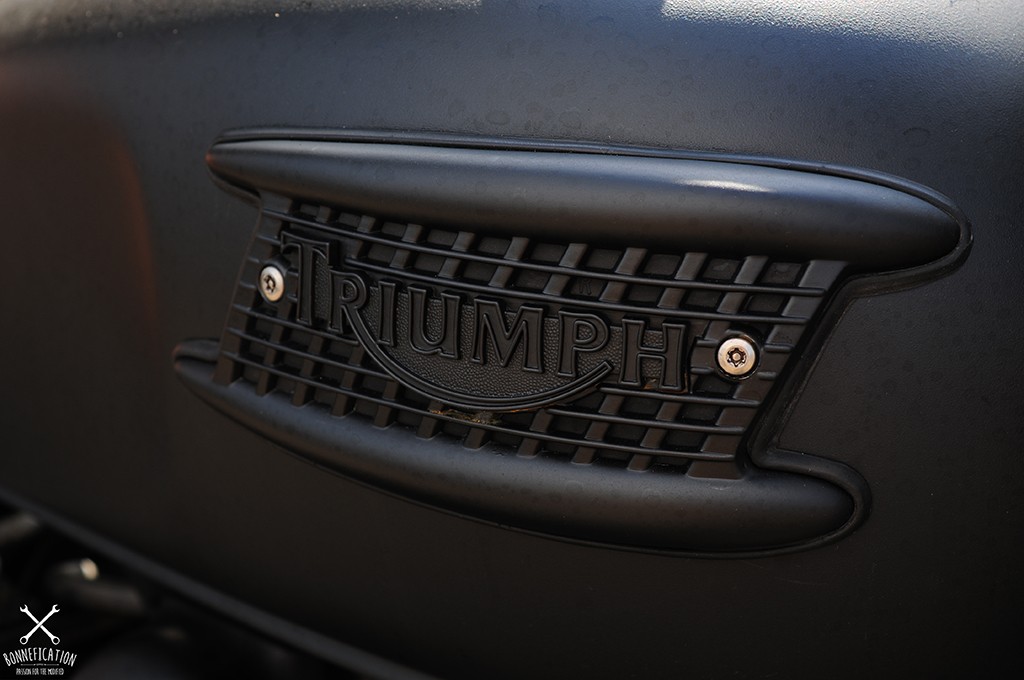