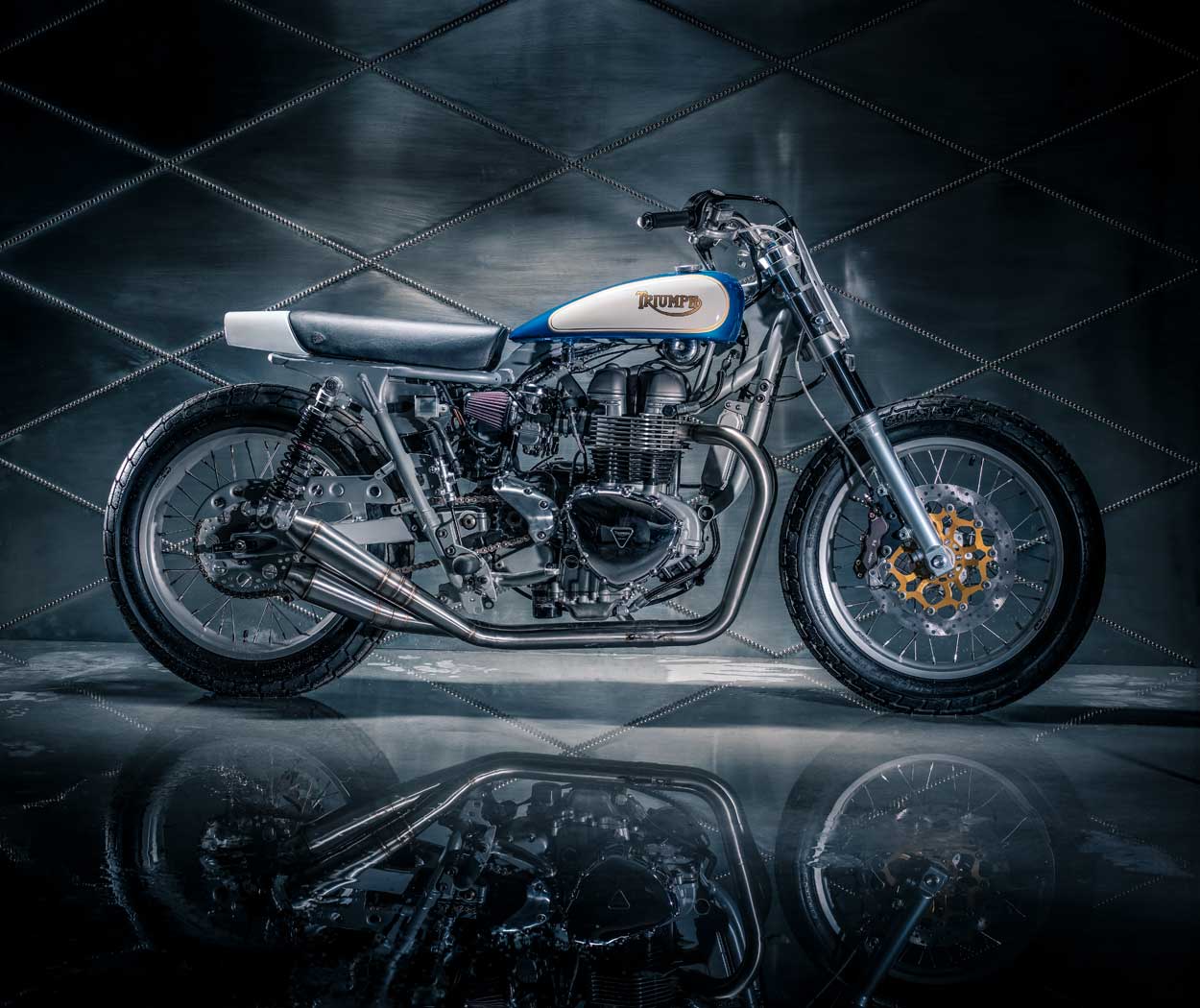 Some of you may ask why Bonnefication hasn’t posted an article in the last few months, while others may not care – for those that do, I write this article while on my honeymoon on the Italian coast with my lovely new wife. As many of you can imagine, motorcycles have not been at the forefront of my mind.  But then very little has happened in the Triumph scene in the last few months to distract me from wedding planning…. Erm…. nope can’t think of a thing. That aside, It’s time to get back to it, and I have this little gem for you that I have been sitting on… 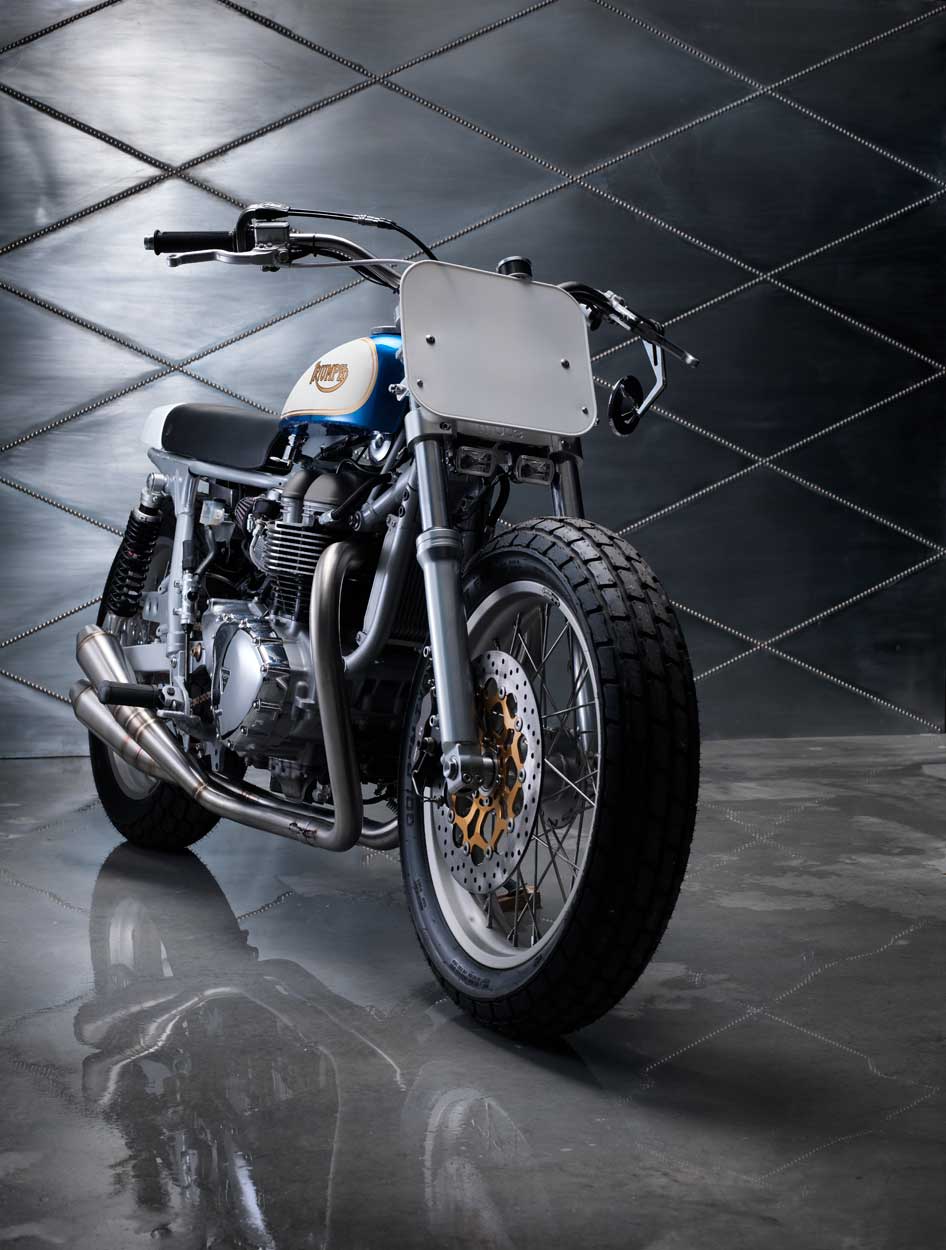 That one-off custom Triumph Twin was built in California in partnership between Richard and Triumph Twin parts and accessories manufacturer British Customs – This Triumph Tracker was built in France with many of the same parts, though some have since been developed and should be available soon. 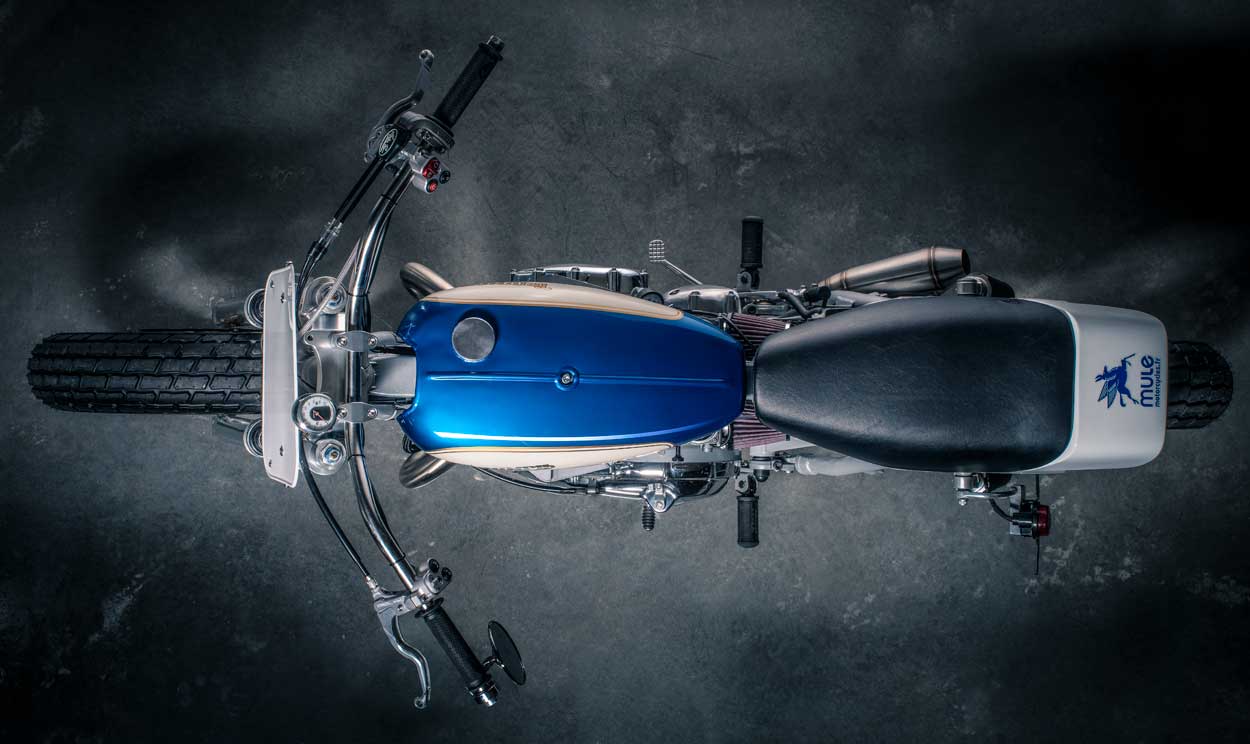 The donor Triumph Twin is the pick of the bunch, forget EFI, ABS, Ride-By-Wire (horrid) Riding modes, traction control, Torque Assist Clutch and all of the other gimmicks we are told we need. This build is based on the more affordable (to buy and to repair), desirable and totally customisable Carb Model Bonneville, circa 2007 with just 9km on the clock. 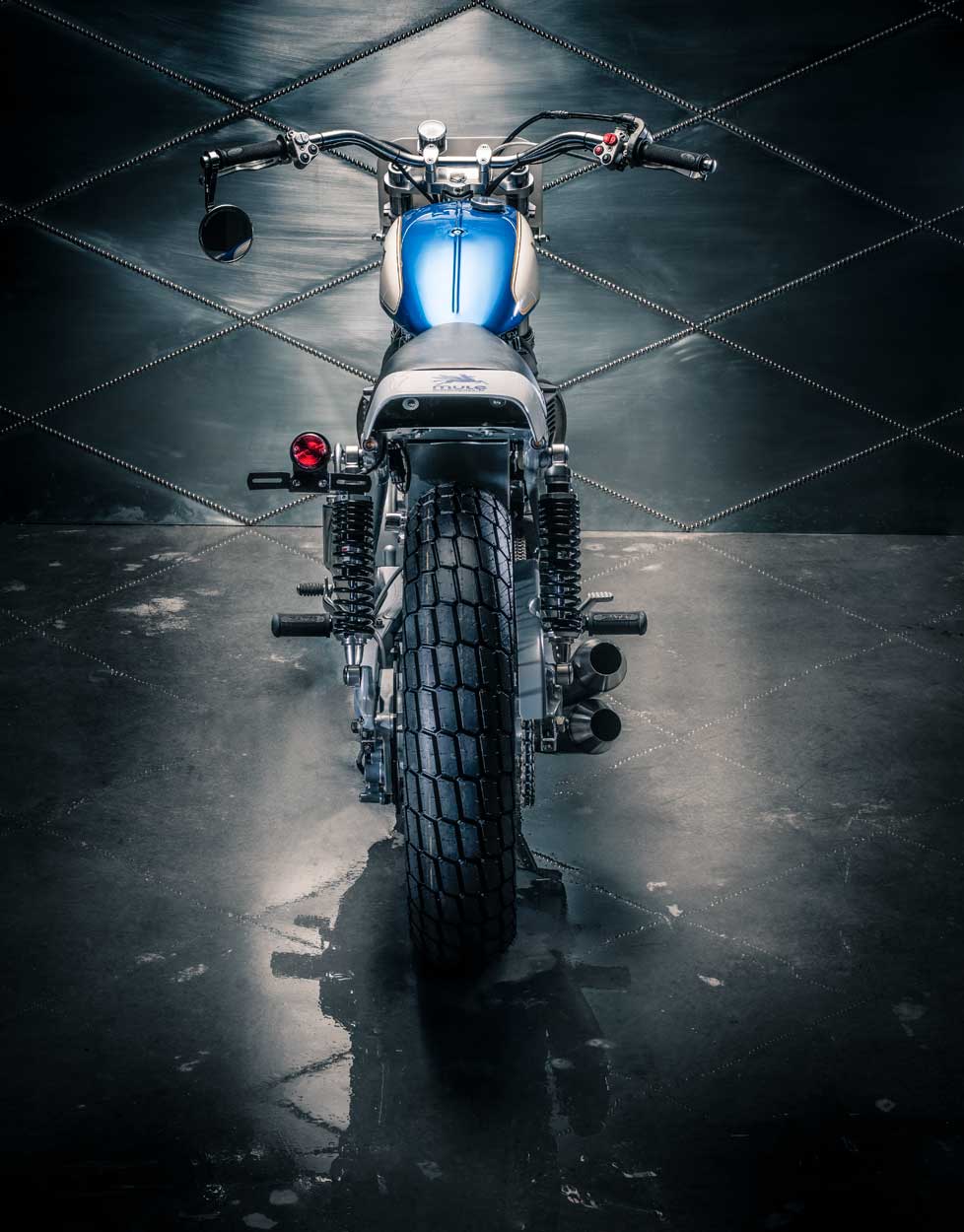 As ever at Bonnefication we start with the core of the bike, the chassis, now finished in silver epoxy paint. A frame which is about as short as my patience with some members of Triumphs management team. Which, like the frame could do with a bit of cutting back, including any of it’s unnecessary lugs or brackets. 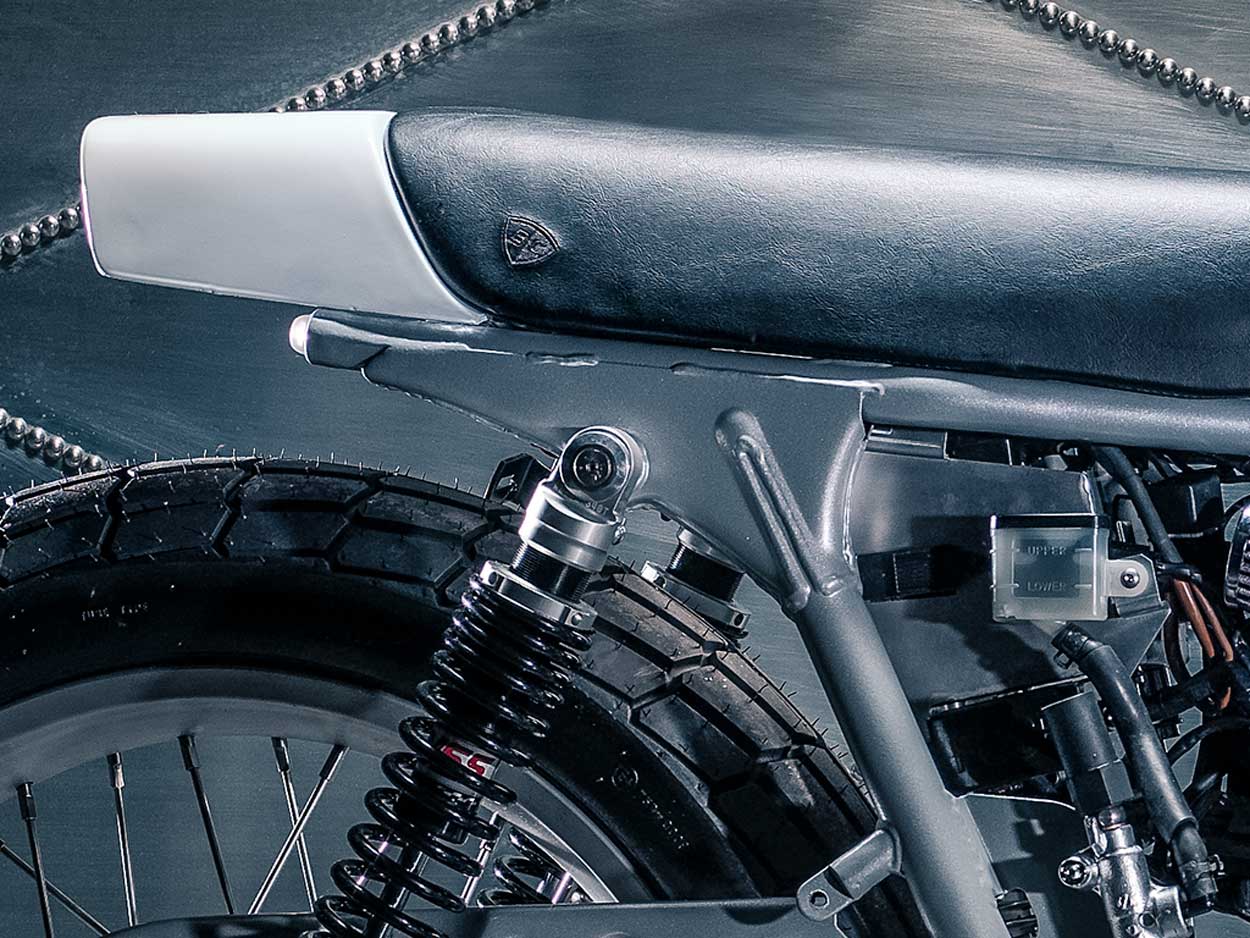 The stock lower cradles were ditched in favour of Mule’s oil-cooler kit with it’s shortened frame rails. These improve the Triumph Twins cooling as well as exposing the lower part of the engine casing, giving this air-cooled Triumph Twin engine a lightened free-floating appearance. 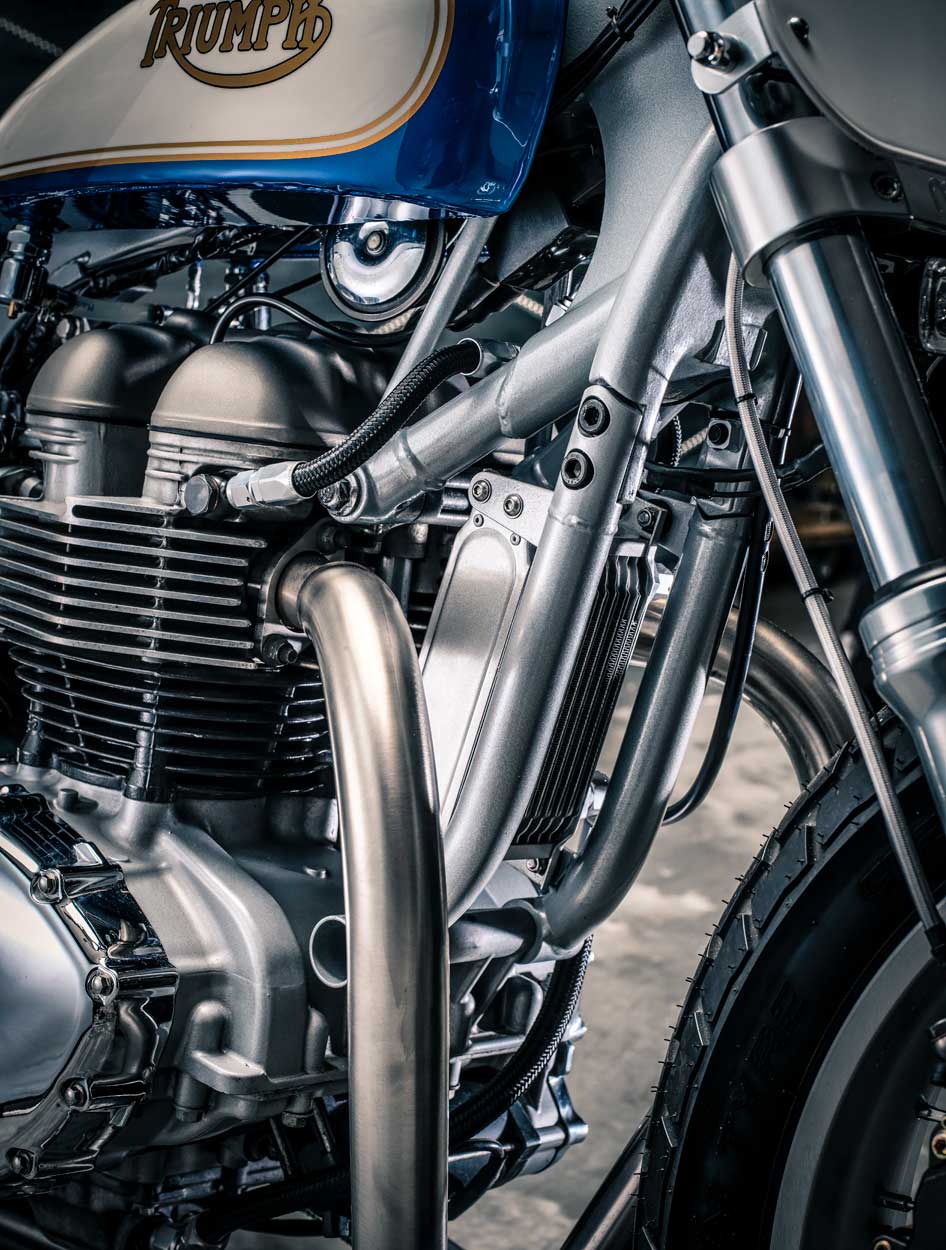 Removing the lower cradles creates a bit of a problem when it comes to getting off the bike; no where for a side-stand. You could just fit a centre-stand, but then it would be far cooler to let the Tracker fall on the floor with a dreadful crunch than to fit such a huge bloated lump of iron. 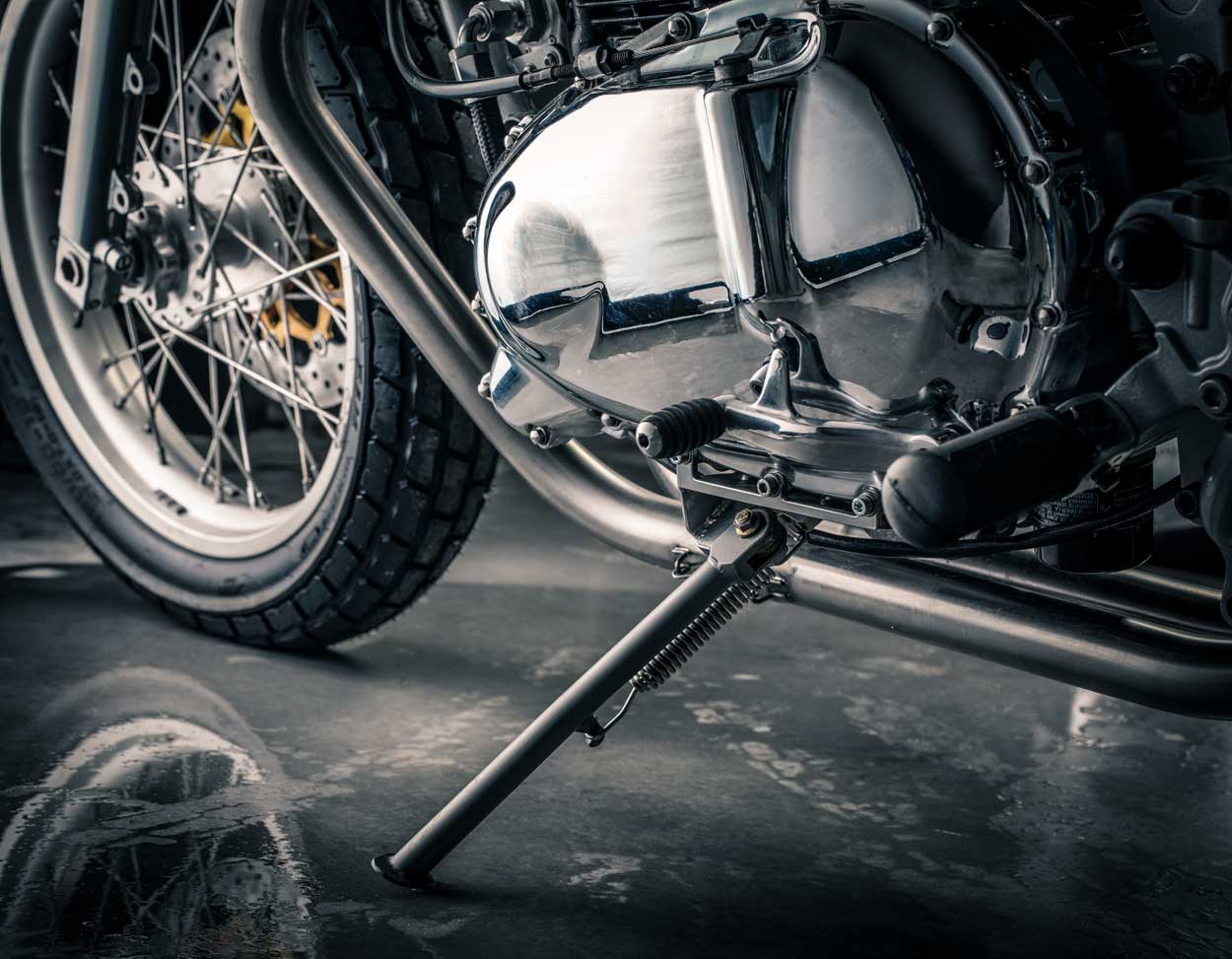 A Better option would be to find a handy wall or tree, or just fit one of Richard Pollocks side-stands, these bolt to the engine, and not only look cool, they are also a lot lighter that stock – important when it comes to the Classic Twin which is known for being a little bloated. To the rear of the bike you will notice the the rear peg mounts have not entirely been removed, but instead adapted into mounting points for detachable rear foot pegs, clever! 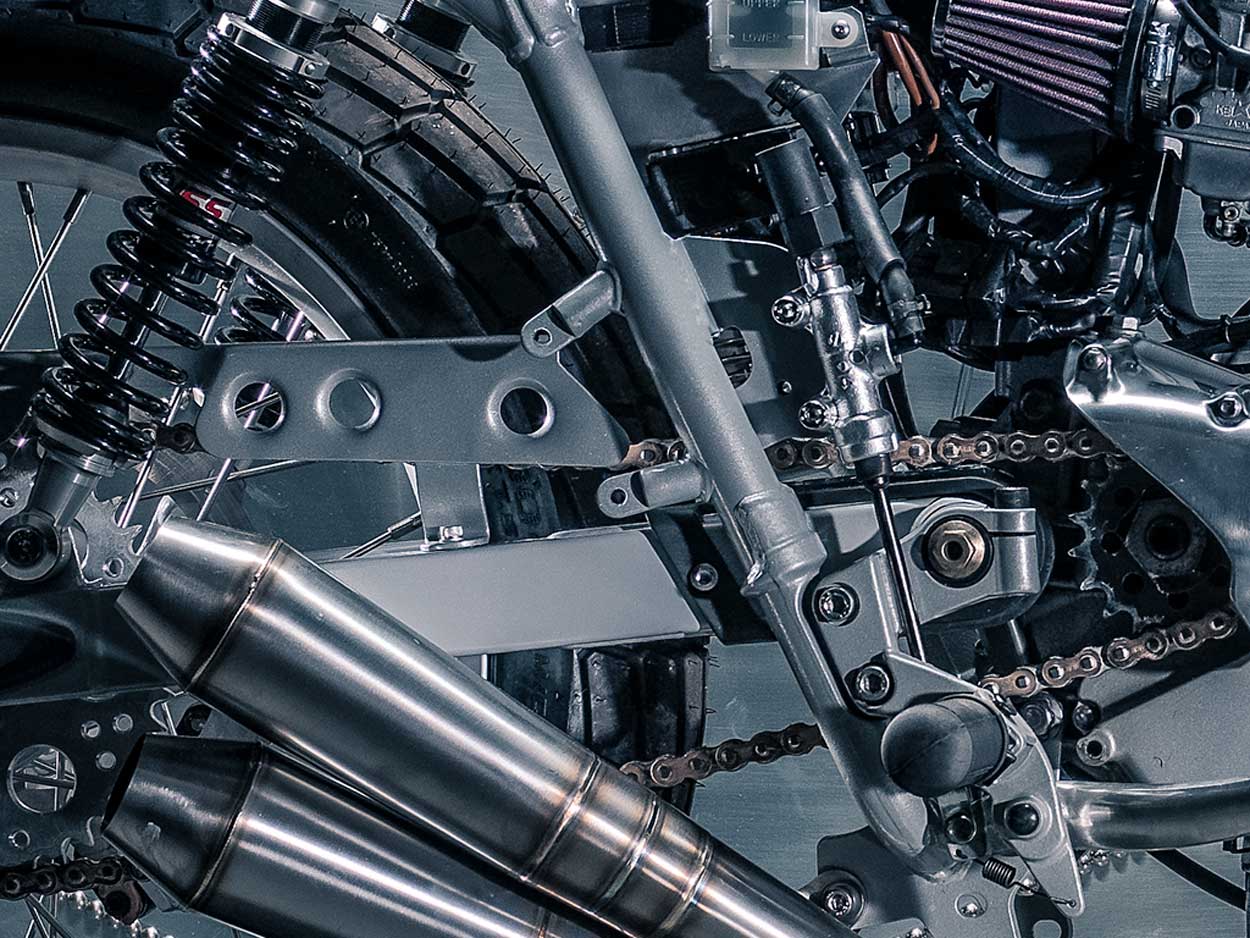 The battery/air-box is gone, replaced by a custom item crafted from aluminium and allows the fitting of K&N air filters. Under the battery-box is the relocated regulator with the ignition switch being mounted to the left hand side. This modification requires the stock loom to undergo a fair amount of modification, with the end result being a much tidier machine. 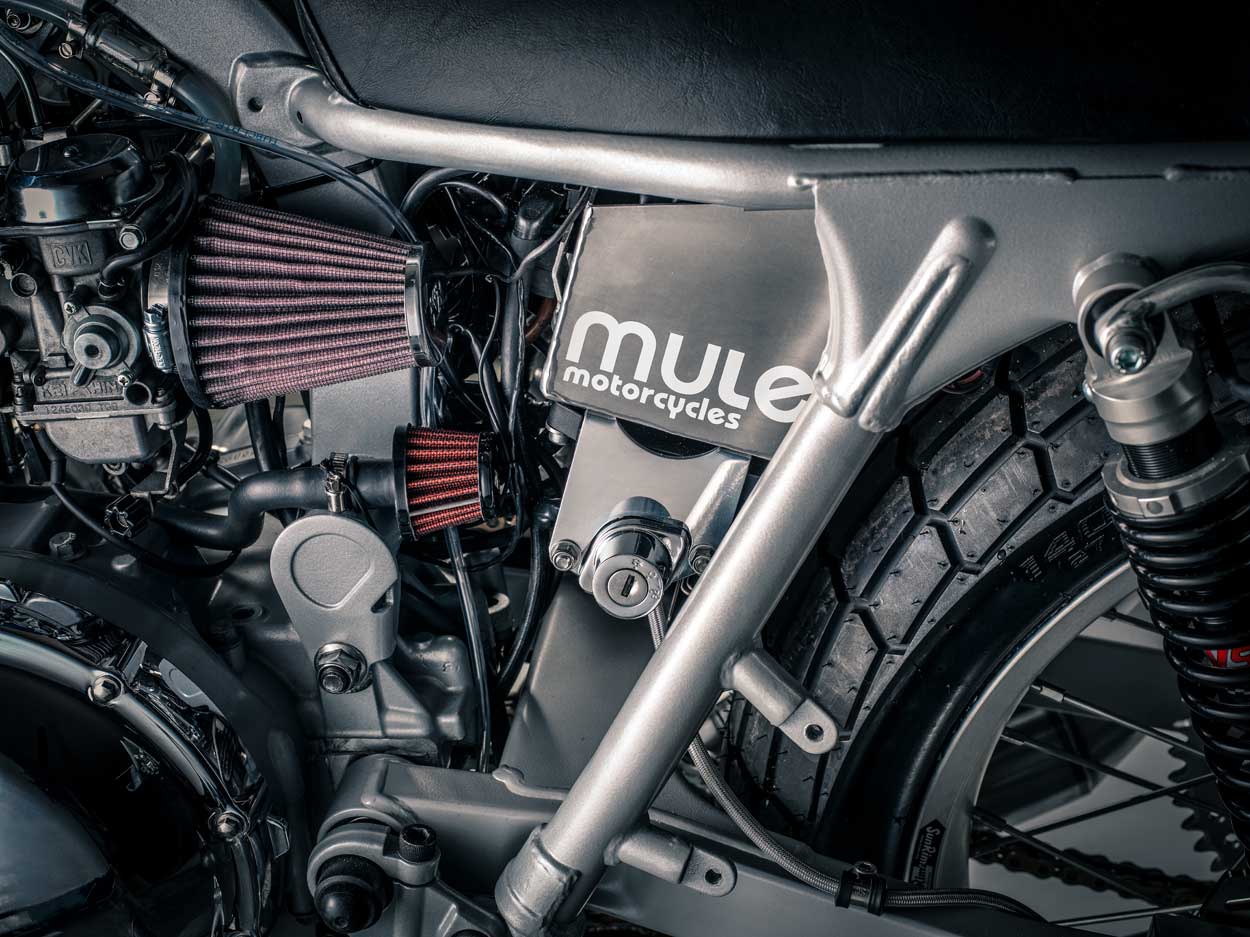 The heavily modified chassis now sits on a set of YSS rear shocks with the front end being totally replaced with reconditioned Yamaha YZF R6 forks by Racetech California. Fitted to this Triumph Tracker via a set of Mule aluminium Triple clamps. 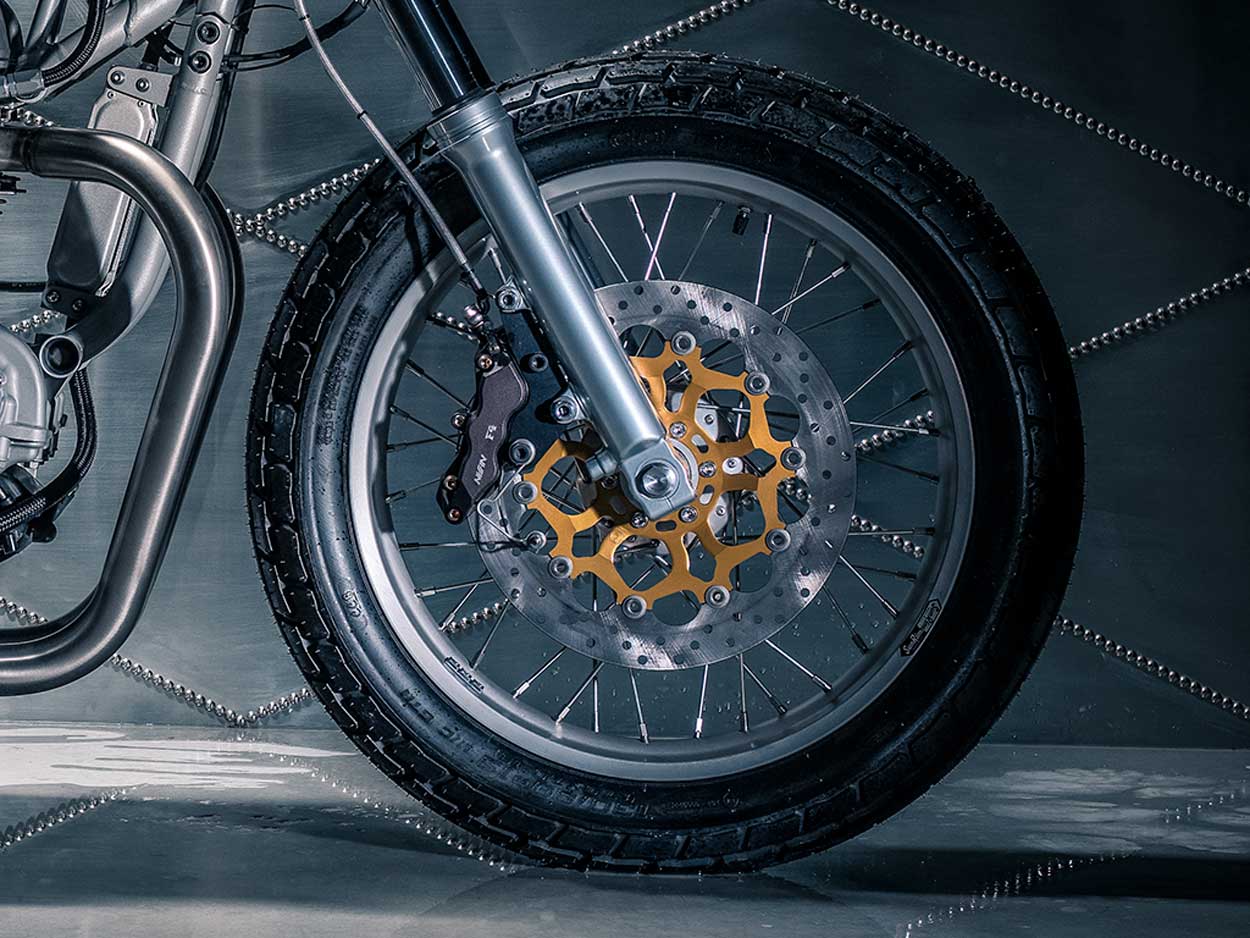 Wheels and tires like on many builds we feature here on Bonnefication make a huge difference to the look of any build, and Flattrack bikes are no exception. To get the Tracker look right, the stock wheels were ditched in favour of 19” Sun rims front and rear, laced to Mule aluminium hubs using stainless steel spokes and nipples. The front hub was then fitted with a Brembo 320mm disc, paired with a 6 piston Nissin calliper. With the rear being given a disc from Braking. The finished wheels were then shod with Goldentyre Flattrack tires. 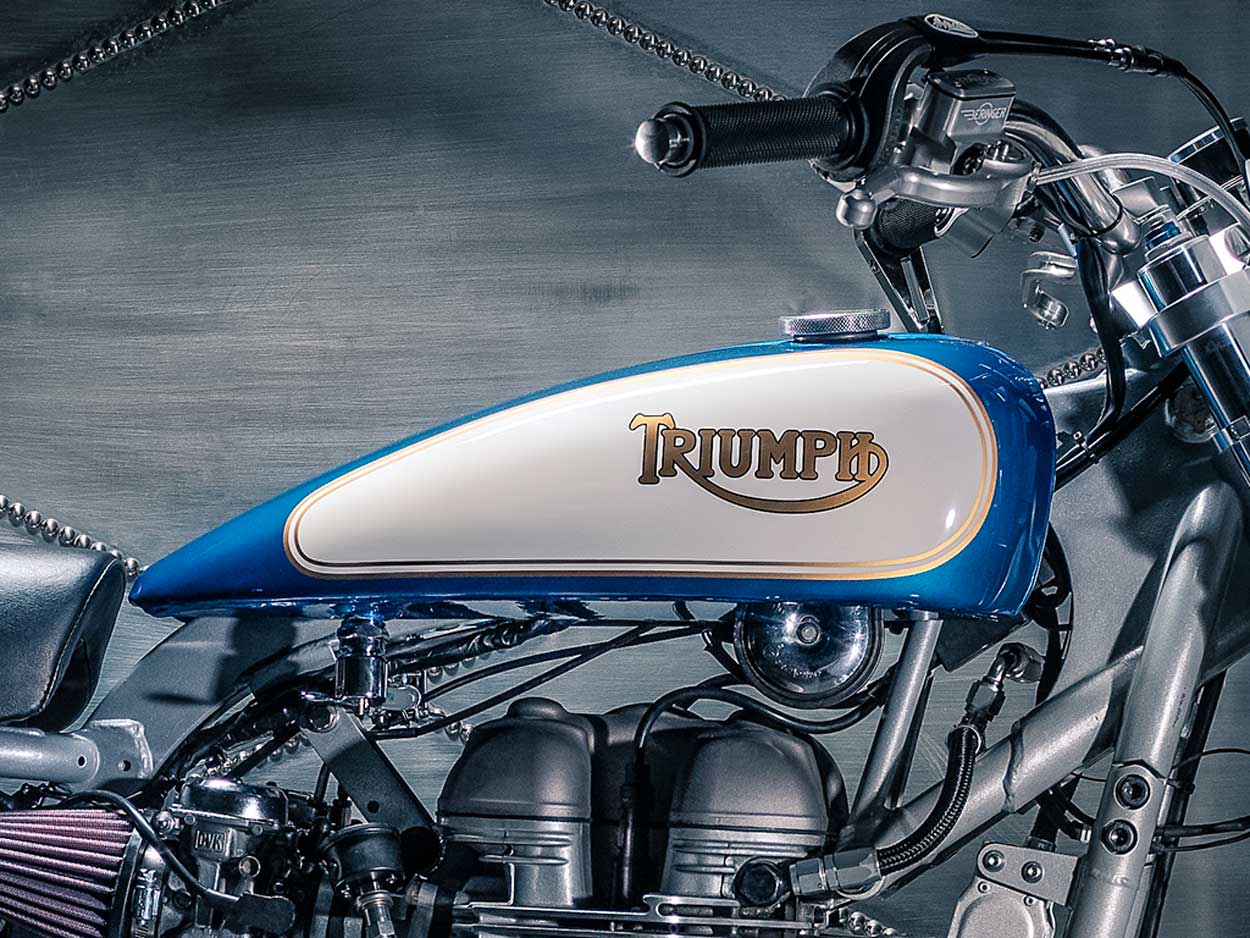 Having attempted to build a Tracker myself, all be it without cutting the frame, I know that two of the greatest challenges presented to a pro or shed builder will the the choice of Tank and the choice of seat. 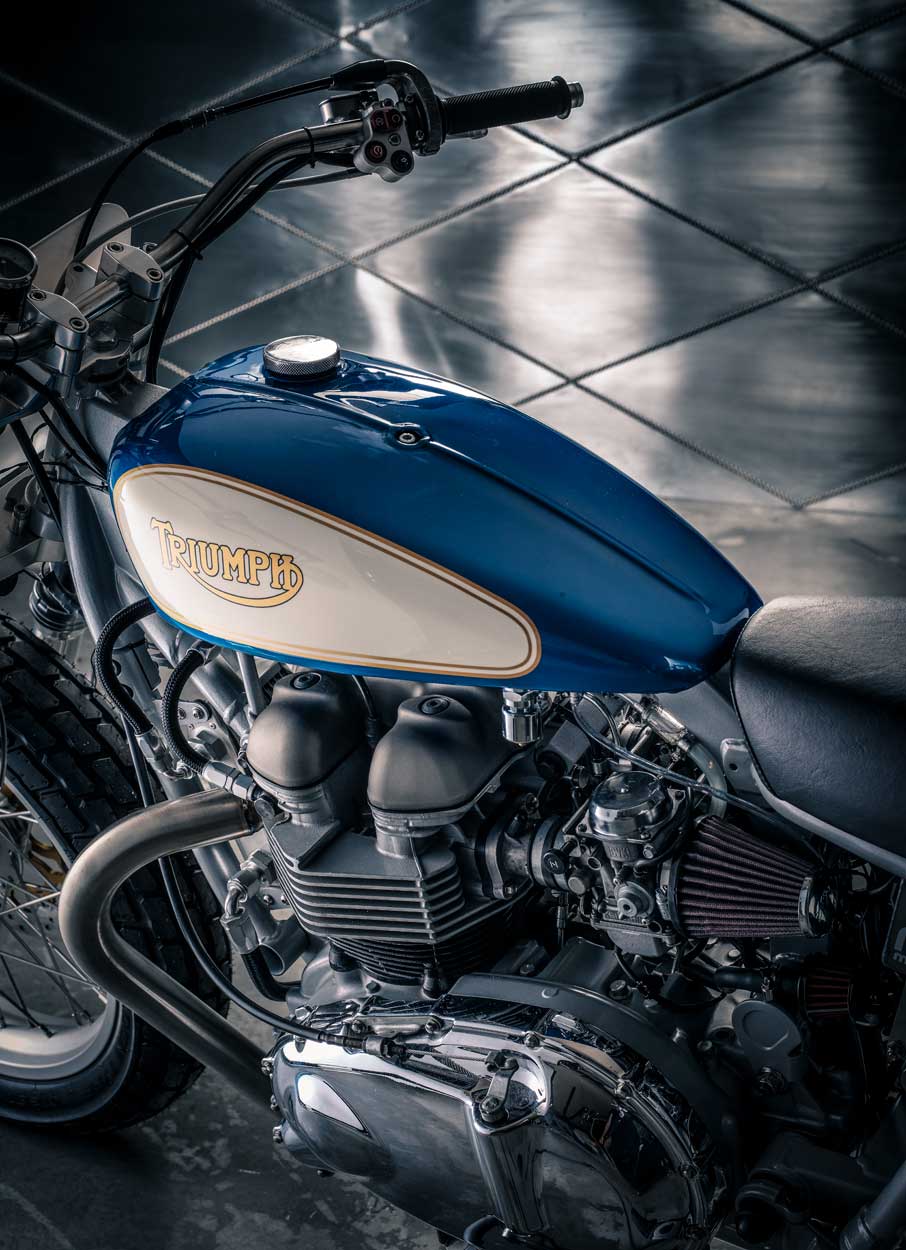 Get these wrong and all you will have is a Triumph Twin wanting to be a Tracker…. and they can look a little tragic!Back in the days of On Any Sunday and the hay-day of legends like Gene Romero, Trackmaster was a name on the tips of many racers tongues. Trackmaster no only produced frames but also sleek petrol tanks which would allow the rider to get as close to the bike as possible, helping said rider to form an aerodynamic shape which ended with a bobbed seat cowl. 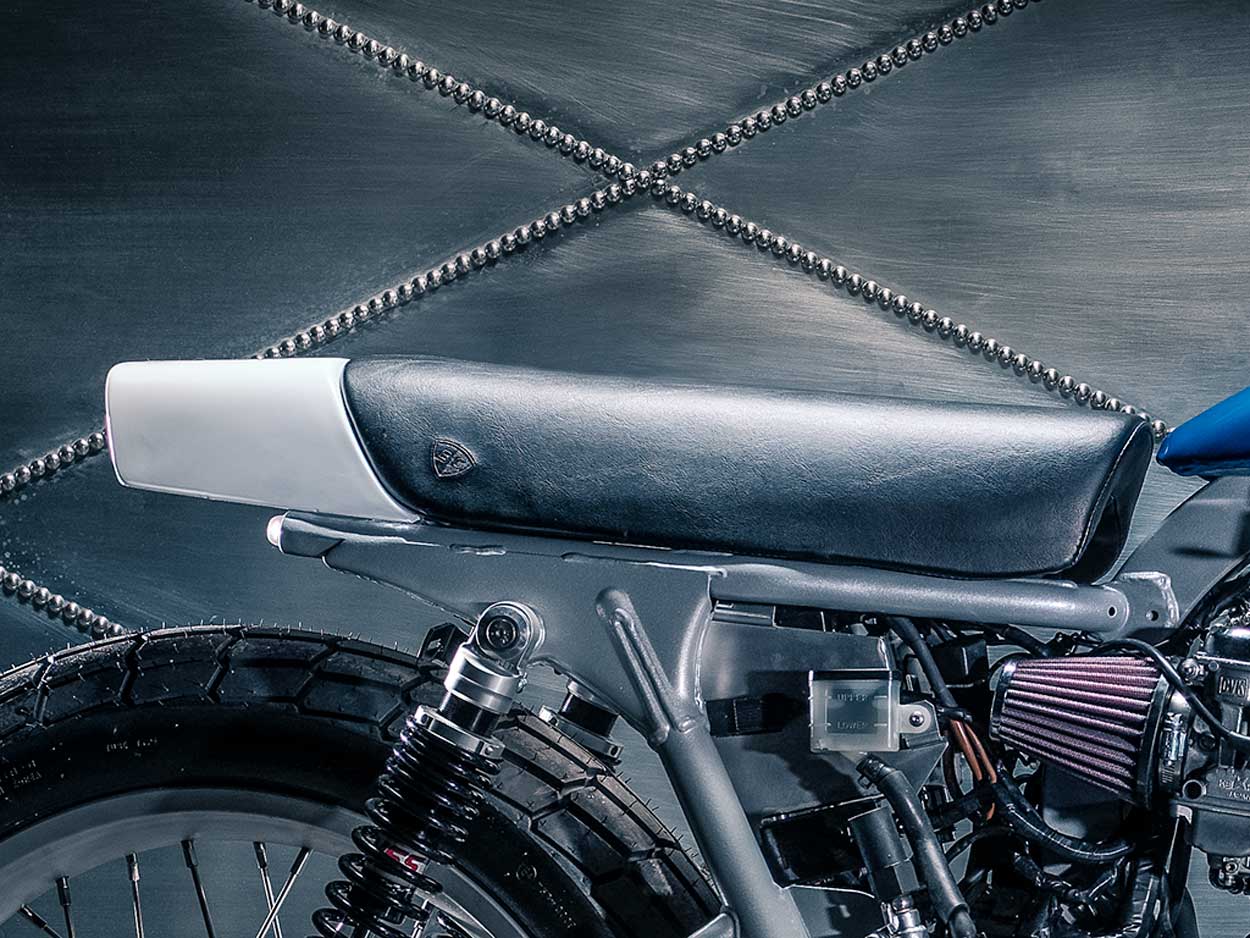 The beautifully finished aluminium Trackmaster style tank featured on this build is hand made, and classically finished by Peinture, Paris to replicate Gene Romero’s 1970’s Triumph Tracker. The seat cowl is also a classic, originally designed to let the rider position themselves on the bike unhindered. The seat cowl made for Richard Pollocks Gene Romero homage was a one-off, but here its an off-the-shelf item and will soon be available from British Customs and BC resellers…erm… cant wait! 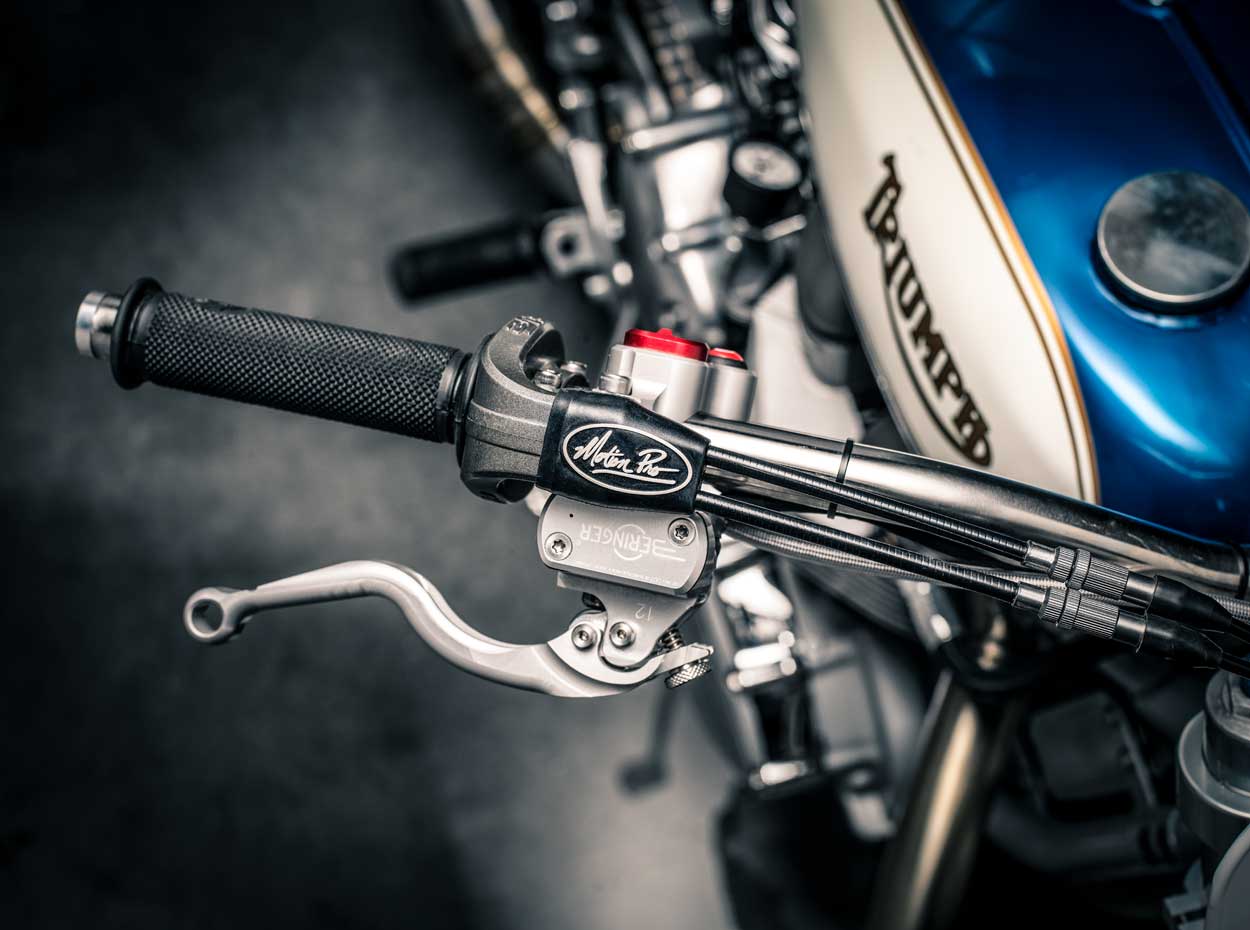 It goes without saying that a Flat Track inspired build needs Flat Track bars, but as the above proves fitting Tracker bars alone will not make a bike a Tracker. The bars on this build are of course from the Mule stable, and have been fitted with Beringer levers which feature integrated switches.

These sit next to Motion Pro grips and a Motion Pro throttle body. The speedo is now the excellent Motogadget Tiny, which has been mounted on the left, just behind a huge number-board which will proudly state your lucky number of choice, to which is mounted a set of Motogadget micro led turn signals. 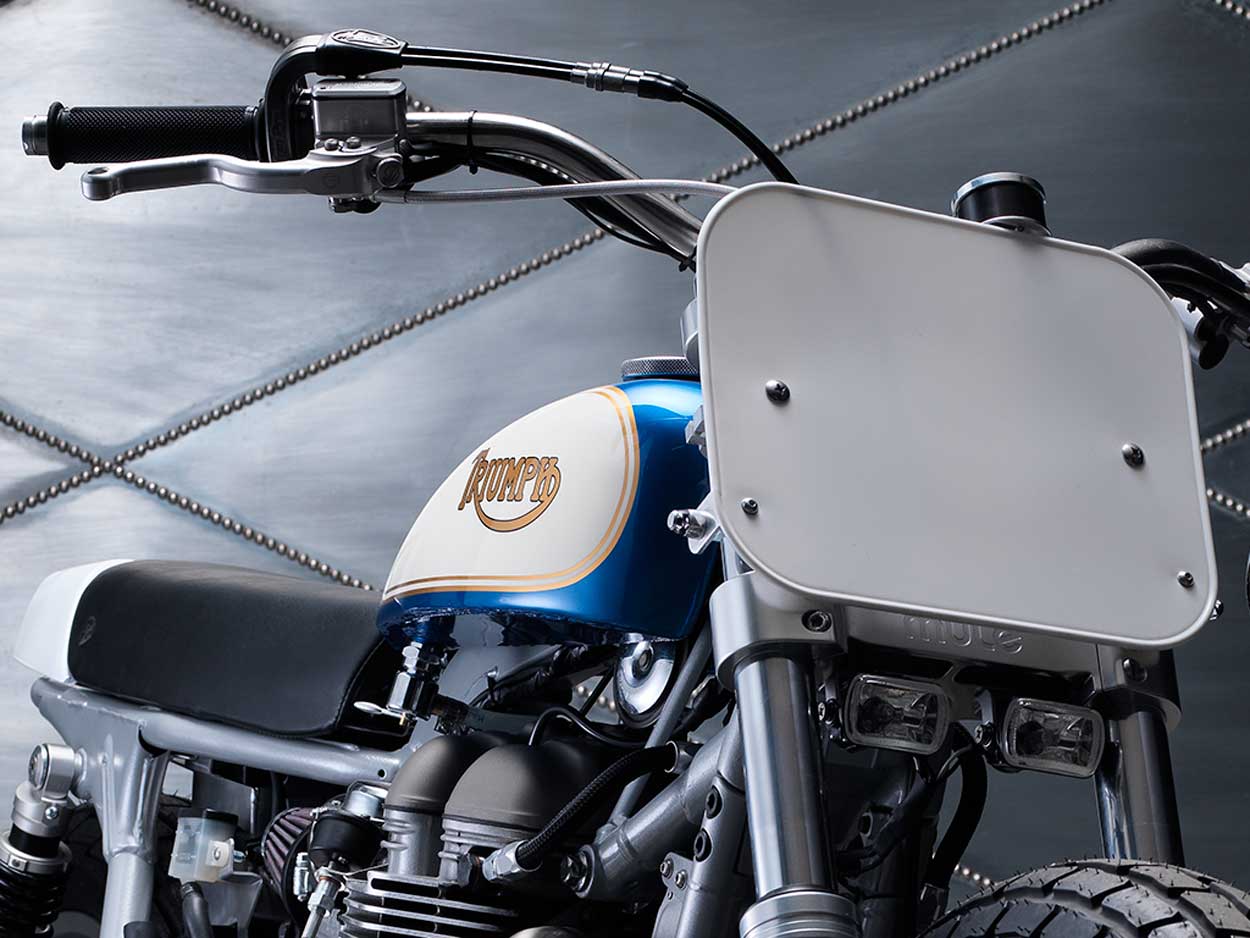 Finishing this build off is a 2>2 stainless steel exhaust system which to be honest is a bit off a stunner – fitted to the high-side, (these bikes only ever turned left) and styled much like those on the Gene Romero 1970’s Tracker, though those are painted black, but stainless steel pipes just look so much cleaner. 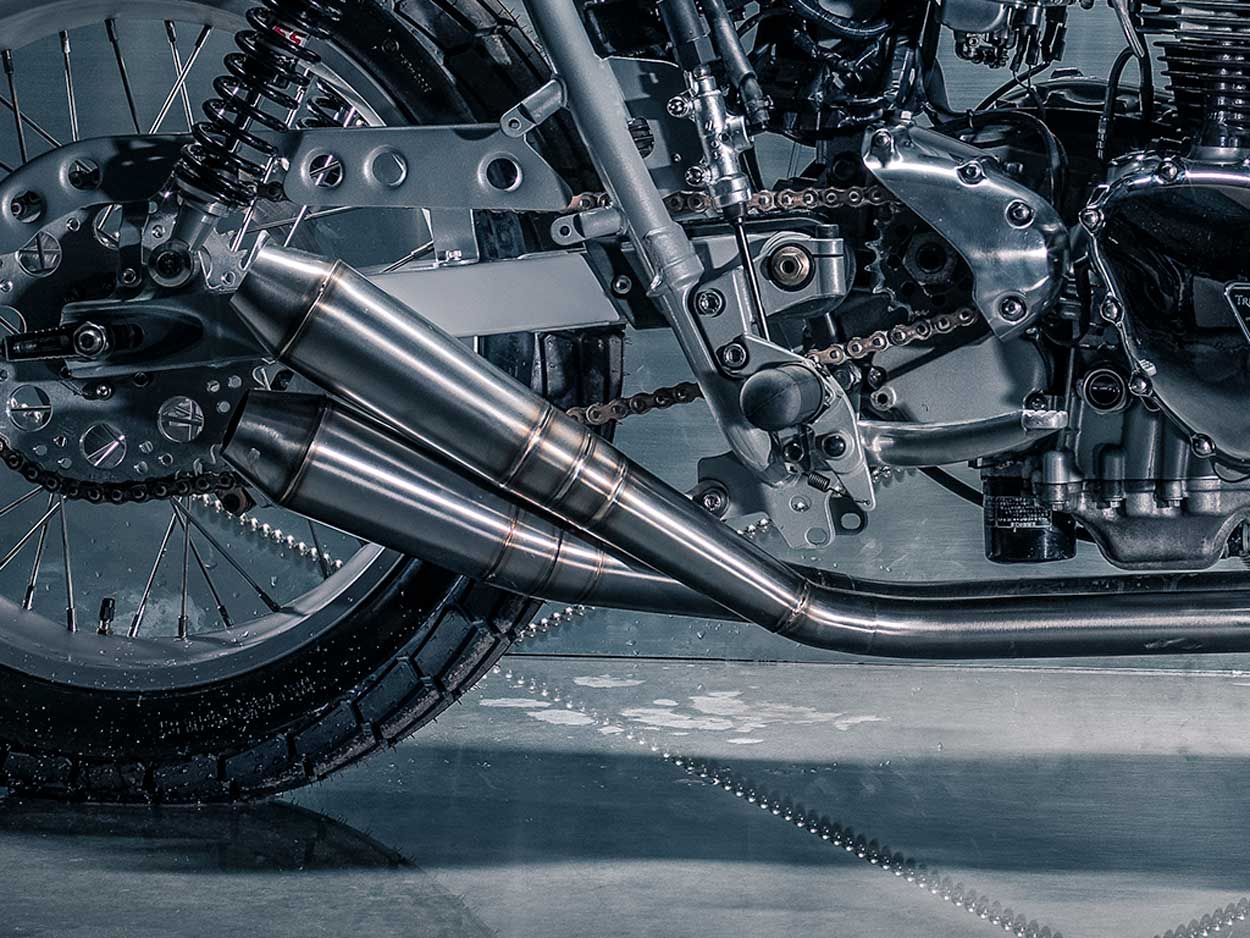 Much, if not all of this build can be, or soon will be purchased from either British Custom in the US, or from Mule Motorcycles France. So fancy building a Tracker yourself…hell,  I do!!! – details below.