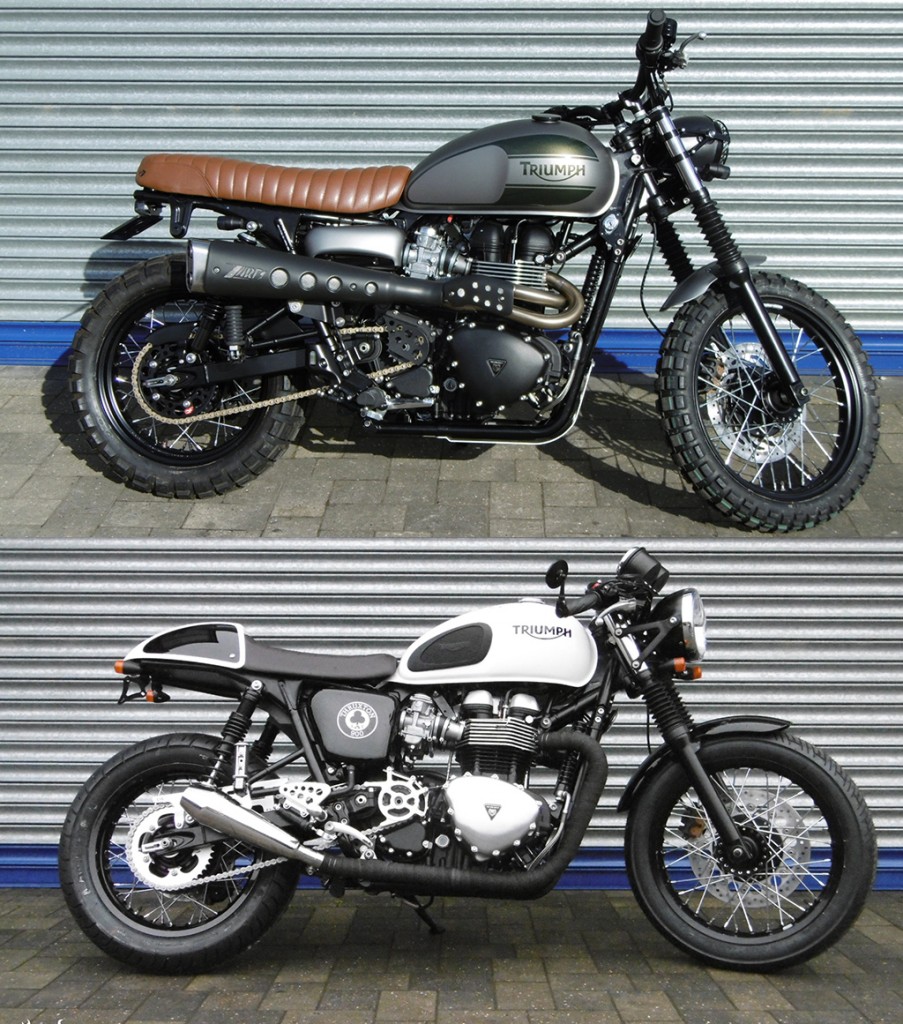 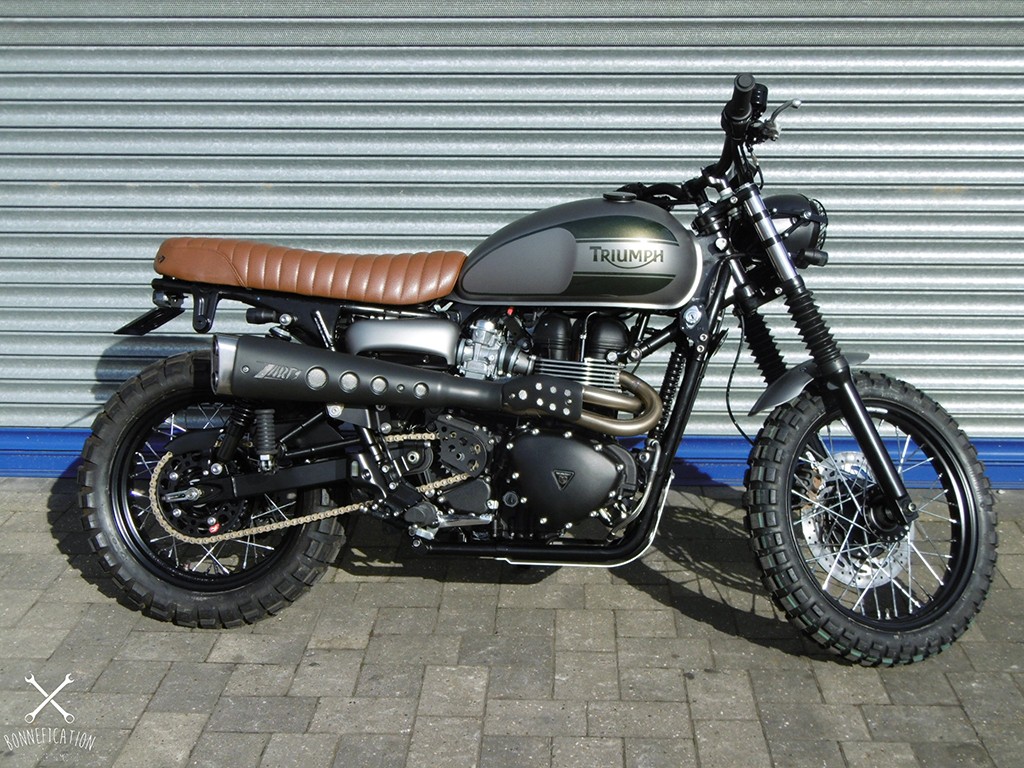 We feature plenty of big budget builds here on Bonnefication, with some Triumph Twins having more spent on them in one sitting than many off us spend in a lifetime. These bikes are usually based on older models and cost more than a brand new unmodified machine. But what if you don’t have a big budget and you don’t won’t to, or you feel you don’t have the skill level to modify the bike yourself. The easy and cheaper answer is to turn to your local Triumph dealer, though I would pick one with some experience at modifying the Triumph Twin such as Jack Lilley, who’s bikes have been shown at shows including the Bike Shed ‘Event’ at Tobacco Docks London and ‘Triumph Live‘ alongside my own humble build. 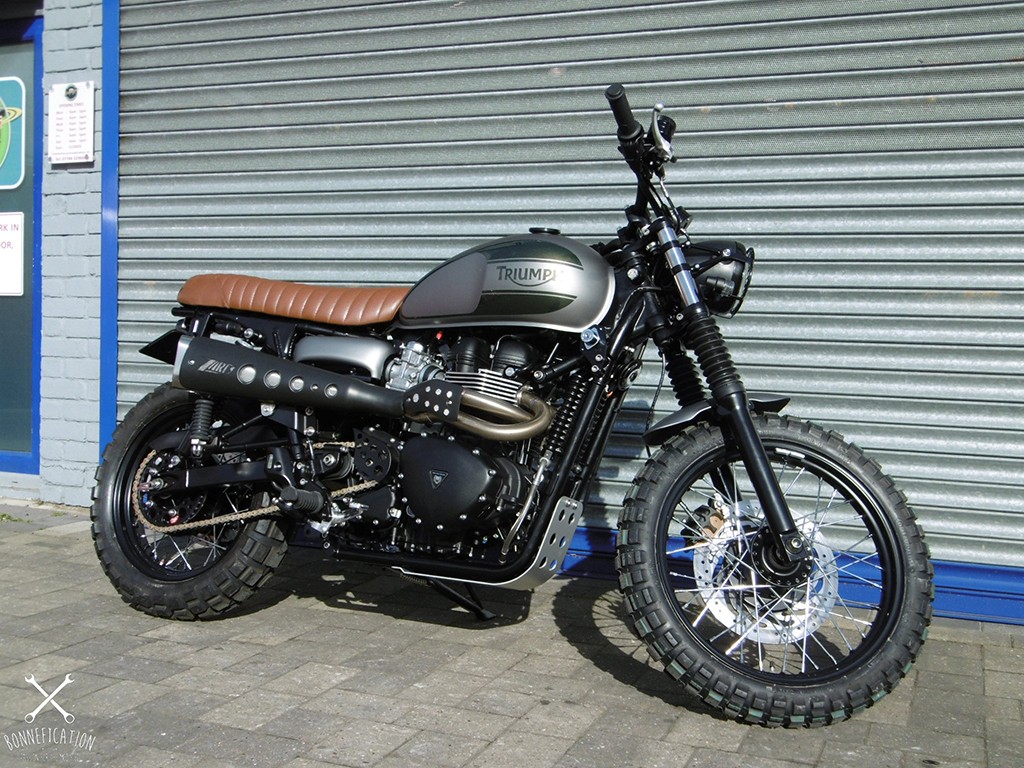 Two of Jack Lilley’s ‘Soft Custom‘ include a Triumph Scrambler and a Triumph Thruxton. With the Scrambler, the client approached the guys at Jack Lilley after seeing some of their previous builds with an idea of creating something special of his own. Each of us probably has a few classic items of clothing in our wardrobe which we feel we should never be without, such as a ironed shirt, smart shoes and a pair of Jeans, this probably goes for both men and women. When modifying the Triumph Twin, there are a few items the modified Triumph Twin should never be without. Those include a better Exhaust, in this case the Zard short exhaust with the heat shields ceramic coated black, Mini retro indicators, upgrading the shocks to something like the Hagon’s and the binning of THAT rear light cluster. After that, to coin a fraise ‘Go your own Way’ 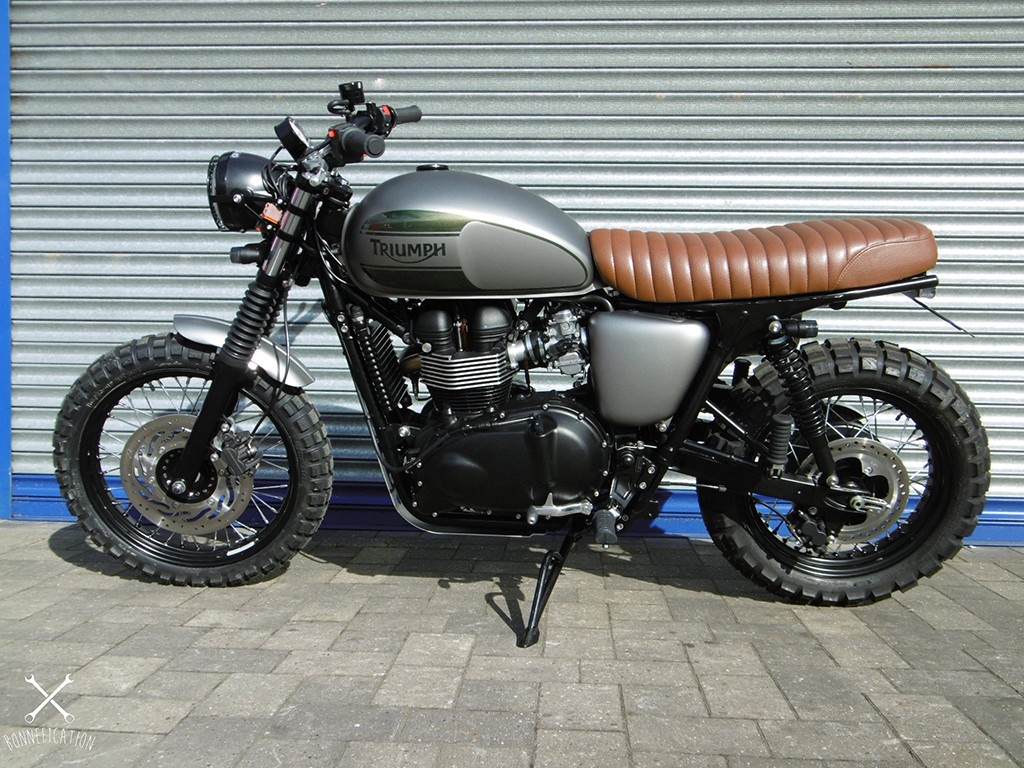 The chaps at Jack Lilley continued by swopping the stock chain for a more attractive Gold item and a black rear sprocket. Other modification include “fat bar” conversion, British Customs fender eliminator, LSL headlight brackets and LSL ignition relocation bracket as well as fitting a headlight grill and a finned front sprocket cover. Another very common modification to the Scrambler is binning the stock tyres the Scrambler is sold with. In this case the bike has been fitted with the Conti TK80, a tyre which is fast becoming the modified Scrambler tyre of choice. With the loss of the rear mudguard the front has had a little taken off to keep the bike in Balance. To finish the Scrambler off the bike received a respray in Matt grey with Goodwood green gloss inserts on the tank and the rather nice British Customs slammer seat, a seat which help the bike look a little shorter without resulting to a frame chop. The end result was a very pleased customer and so he should be as this Scrambler is looking very smart. 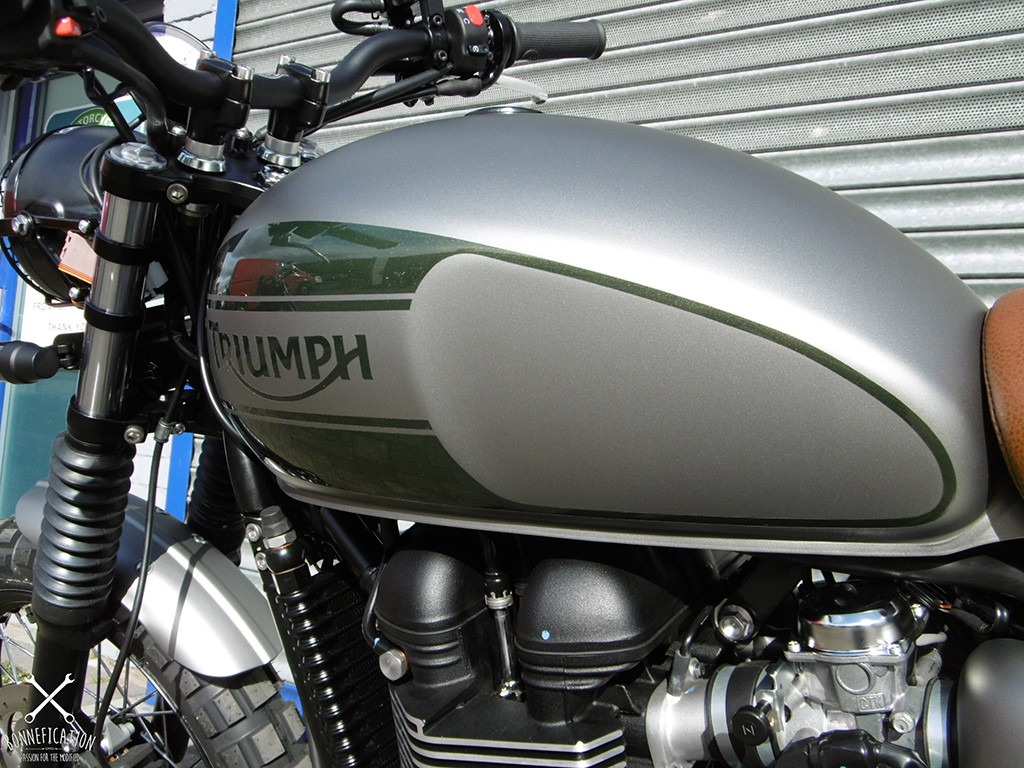 Just like the Scrambler, the Thruxton, out of the crate is a good looking Twin, even more so when that Twin is the out-of-the-crate custom, The ‘Thruxton Ace’. But an OEM custom is no custom until its been modified. 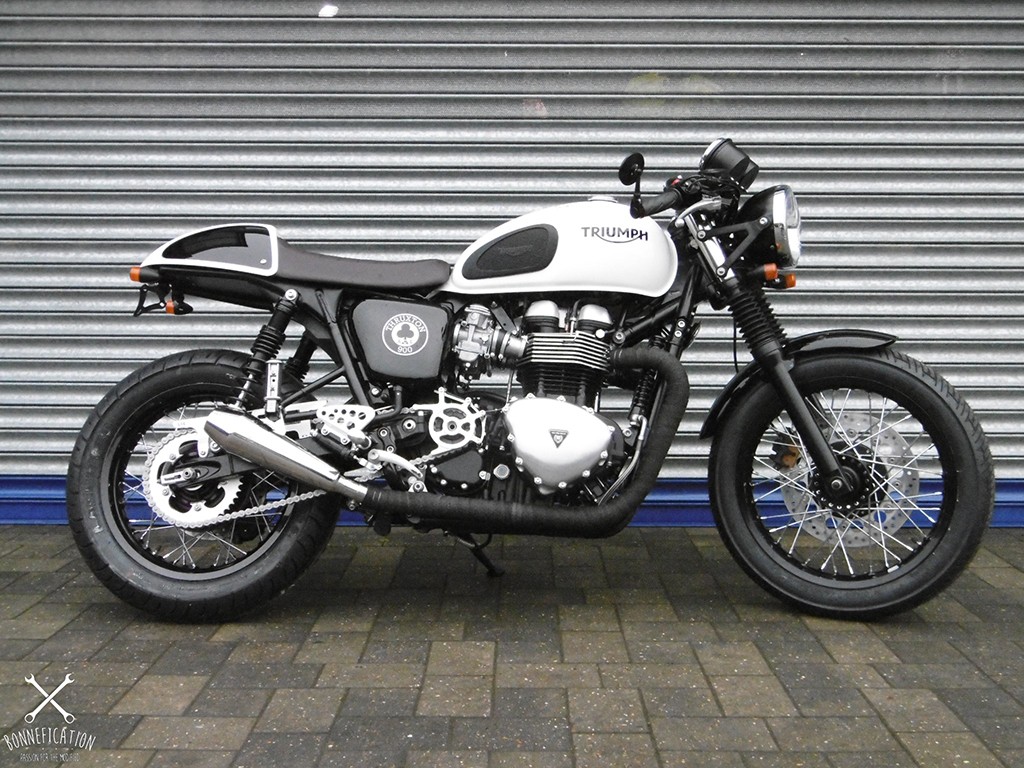 The spec for this bike includes; replacing of the black engine cases with new alloy finish items, Ace bars. wrapped headers with BC predator “stubby pipes”. Other upgrades are again replacing the rear mudguard and tailing with a Tail tidy, smaller indicators, a Roland Sands seat and K-Tech Razor lite rear shocks. 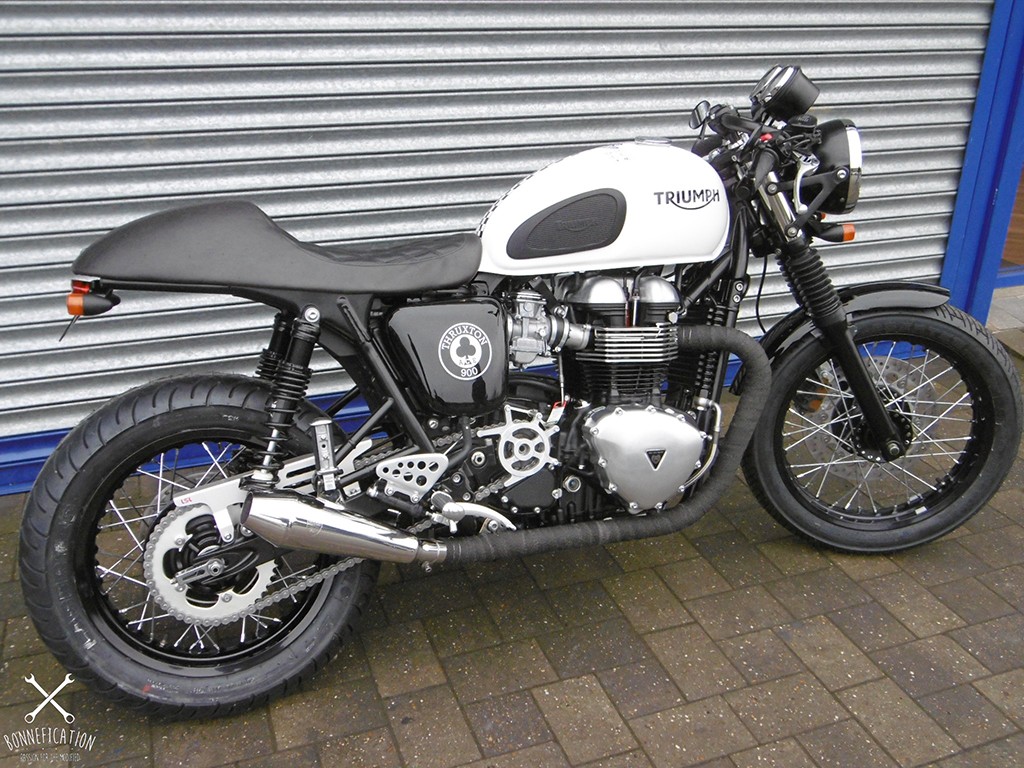 The upgrades didn’t stop there, A wider rear tyre was fitted and the stock chain guard and sprocket cover being replaced with items from LSL. This Ace has also been fitted with  Fork gators, protecting those fork legs and a Black headlight bowl with chrome rim. This bike is now ready for a new owner and is for sale for  £11999. Im sure the new owner, who ever that may be will be very happy with it. he or she may even continue the upgrades with some Ohlins inverted forks and a Motogadget speedo.