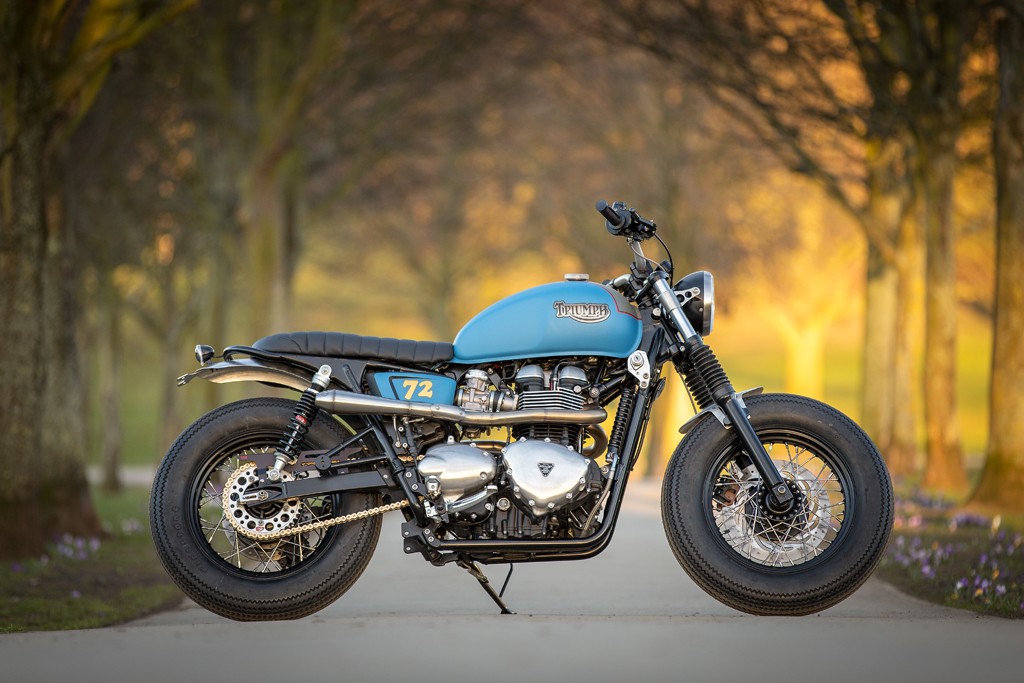 Custom Twins are coming thick and fast and from all directions and countries at the moment. It’ great to see some of those Triumph builds come from here in the UK. Though, in my opinion we are still not seeing enough compared to mainland Europe. One such UK builder is Down and Out Cafe Racers who are based on the outskirts of Sheffield. 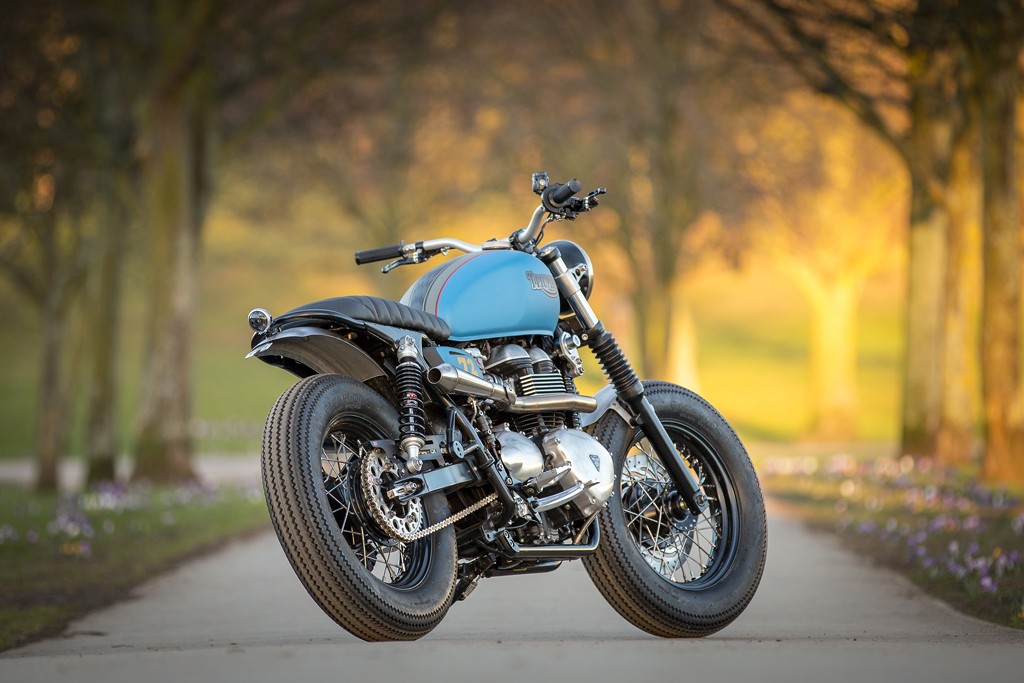 We have already seen what  Shaun the ‘Gaffer’, Carl the ‘Fitter’ and Simon Krajnyak  the photographer, who has taken these excellent pictures can do with both their Scrambler and the superb Hinckley Triton builds. The project started when Shaun wanted a new bike that he and Carl could blast about on, a bike which needed to be based on something more usable for everyday riding. It also needed to be a bike that sported ‘alloy mudguards, fatt wheels, black rims and a supper cool paint job’ just like the custom BMW’s and Honda’s D&O build, so thats exactly what the guys set about building. 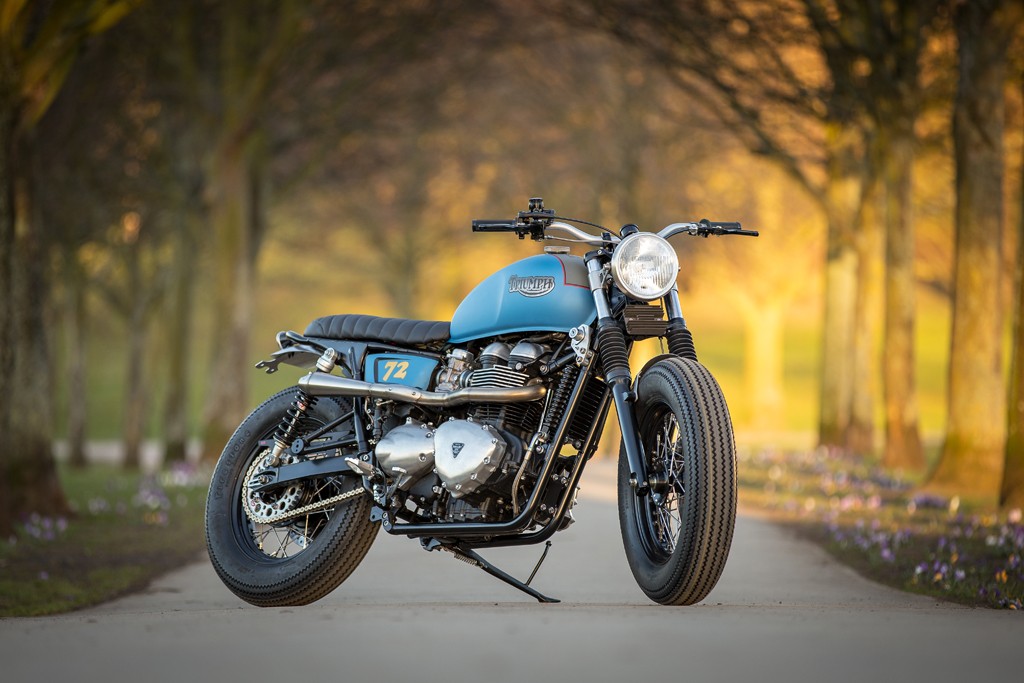 The donor bike was a 2014 T100 with just 300 miles on the clock. The first thing the guys did, as you would expect was to chop the frame. I think we can all agree the stock bike is a wee bit long. An off the shelf frame loop was welded in place, which D&O make specially for the Hinckley Triumph Twin. 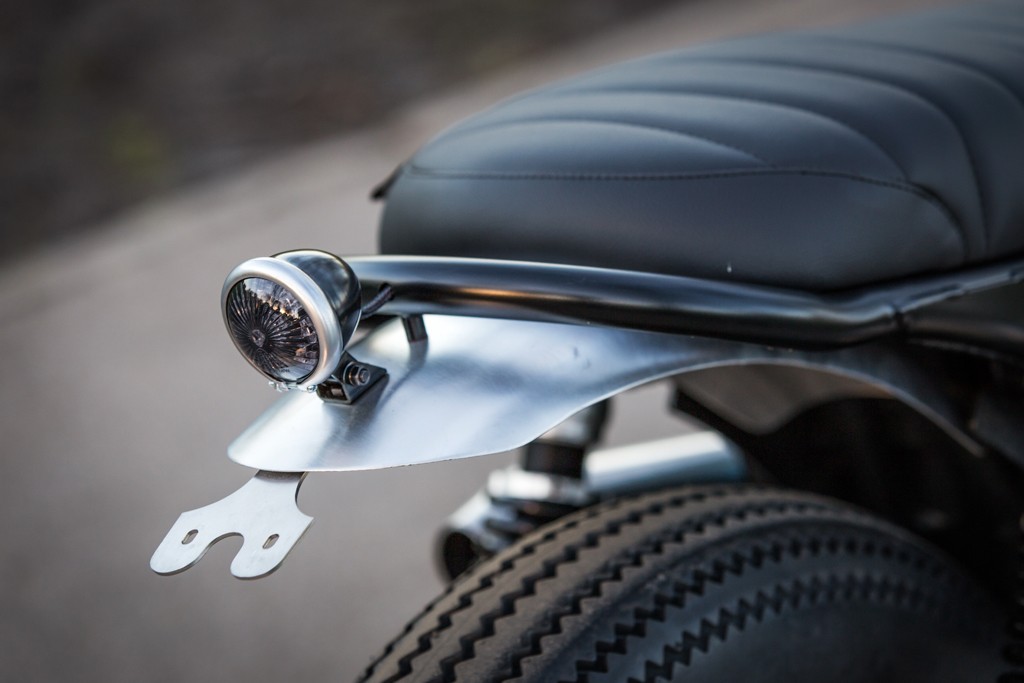 Also a D&O alloy mudguards, which usually find itself on BMW’s was adapted and shaped to fit the new back end. Finishing off the rear is the ever popular Bates LED taillight and custom licence plate bracket. A nice feature is the wiring for the tail light being fed through the new frame loop, keeping everything nice and tidy, (nice touch). 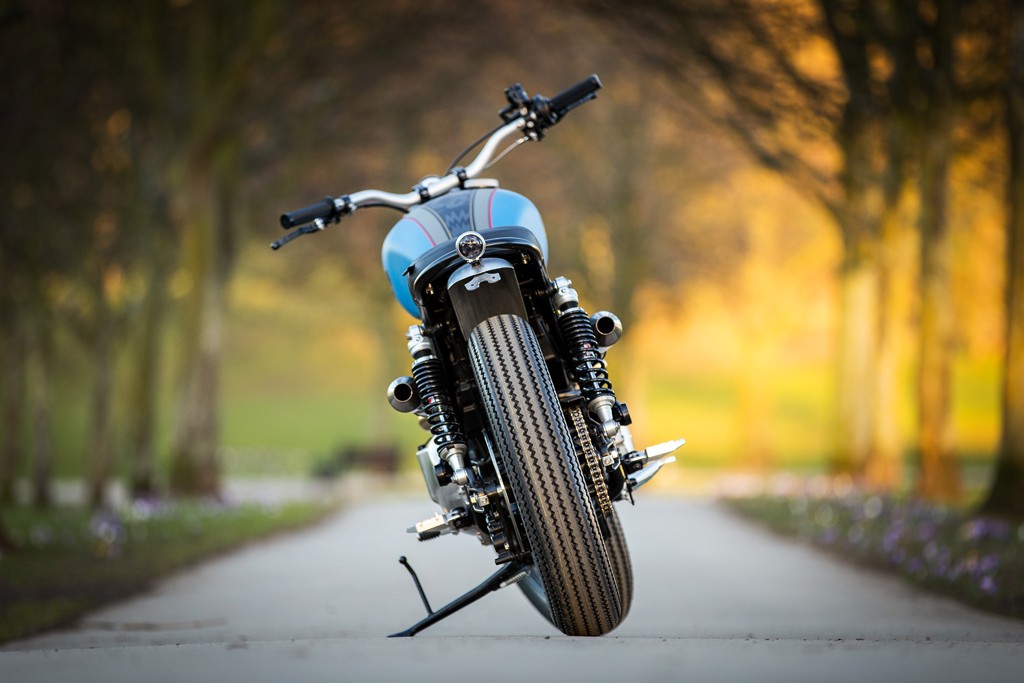 With the frame modification a new fibre glass seat base that’s around 127mm shorter then the original item had to be made and then fitted with just enough foam to keep it comfortable. The front and rear hub are standard but laced to 16″ black powder-coated rims and fitted with vintage Firestone deluxe 16×500 tyres. Getting the 16″ wheel in the forks with room for a mudguard was an issue, but one that was clearly resolved by the guys at D&O. 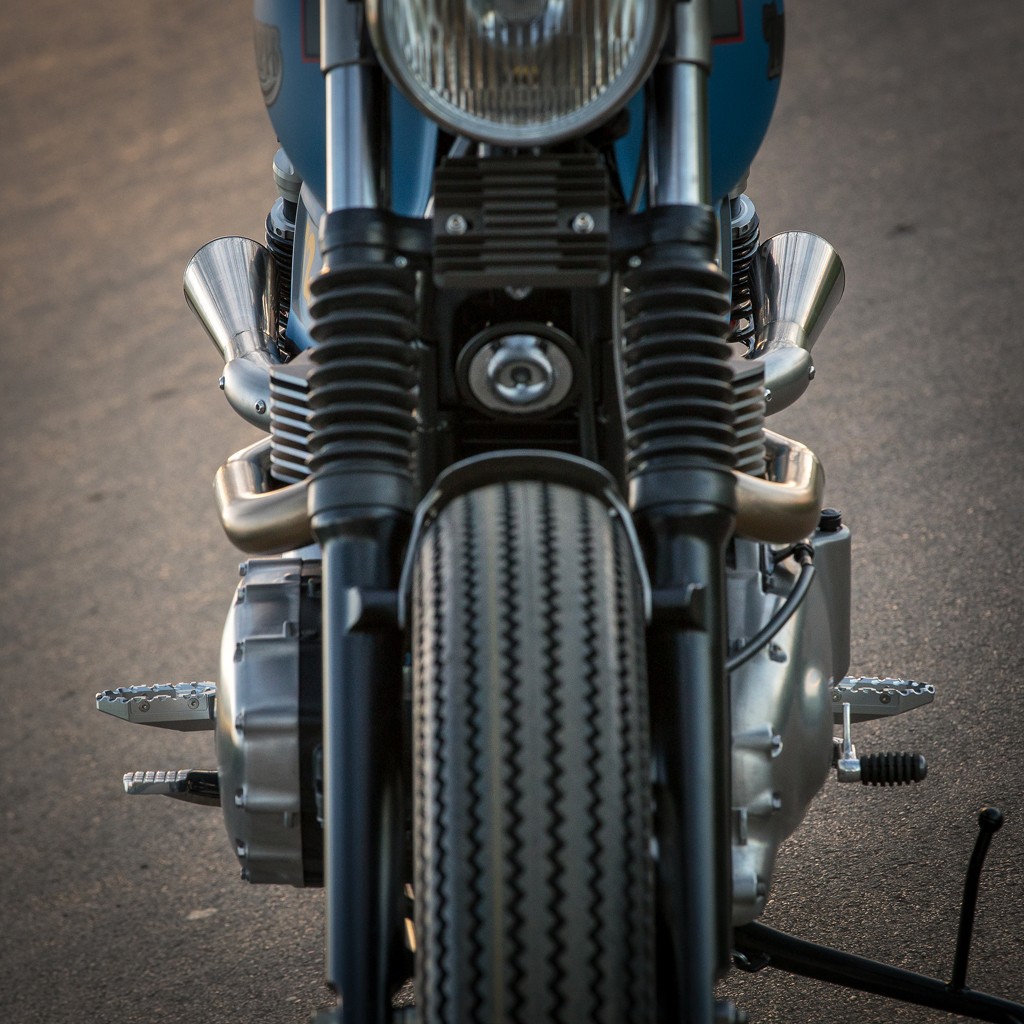 At the front is a D&O head-light with stainless steel mounts (and a rectifier…lets not forget the rectifier) which bring the light in a little closer to the forks. helping the bike appear even shorter. 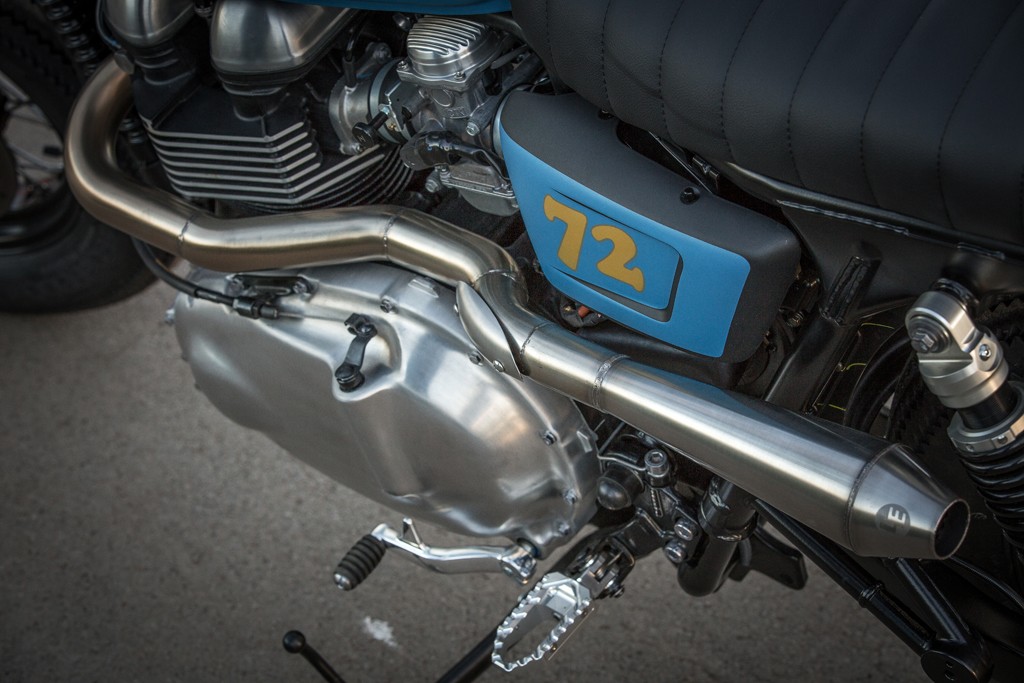 The D&O 2-2 high pipes are pretty cool and I believe another product to be made available via the D&O website shortly. Great  feature of these pipes is that the follow the engine shape pretty well rather than being straight shotgun pipes. What I have noticed from this, as I have something similar on my own Scrambler is that you legs don’t touch the pipes as they may do on other exhaust. The high 2-2 configuration also balance the bike out really nicely. 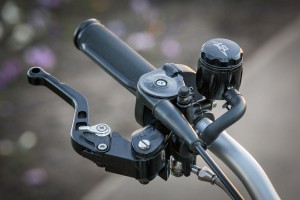 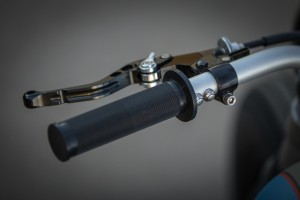 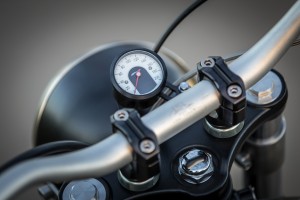 Bars and risers are from LSL, with the bars being fitted with wired-in micro switches and controls from a GSXR 750, both helping to continue the Triumph’s stripped down appearance. The speedo is the super cool Motogadget Tiny with mounting bracket and CABbus adapter. Other bits of bling include a LSL reservoir, chain-guard and ignition relocation bracket which has been modified to fit the settings button for the Motogadget speedo (another nice touch). The alloy petrol and carb caps are both from  Motone customs super cool range of goodies designed for the Hinckley Twin. 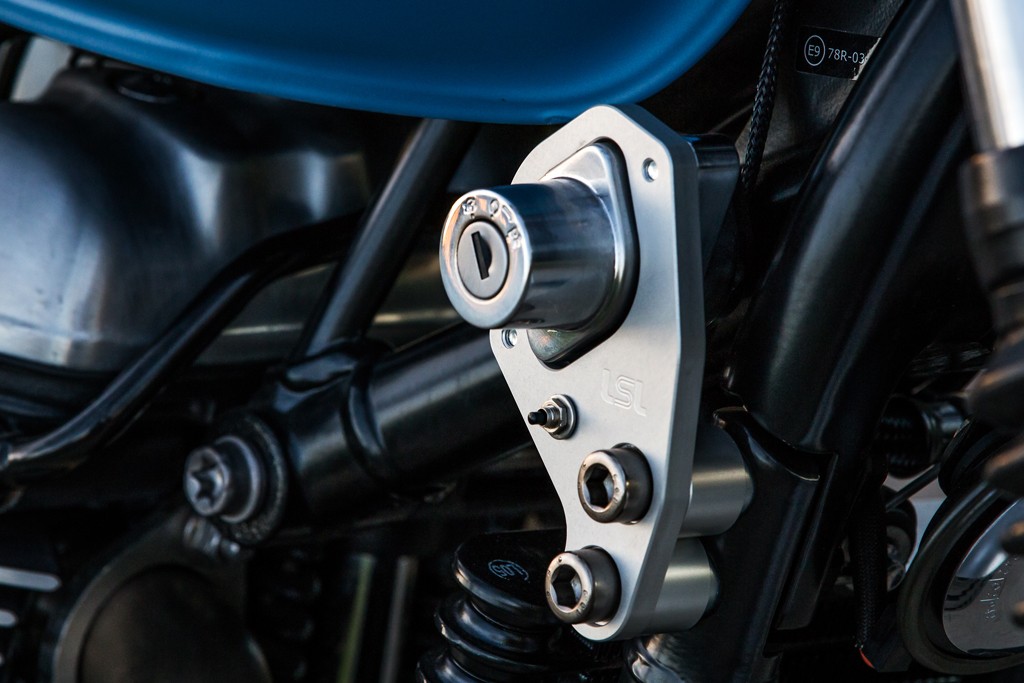 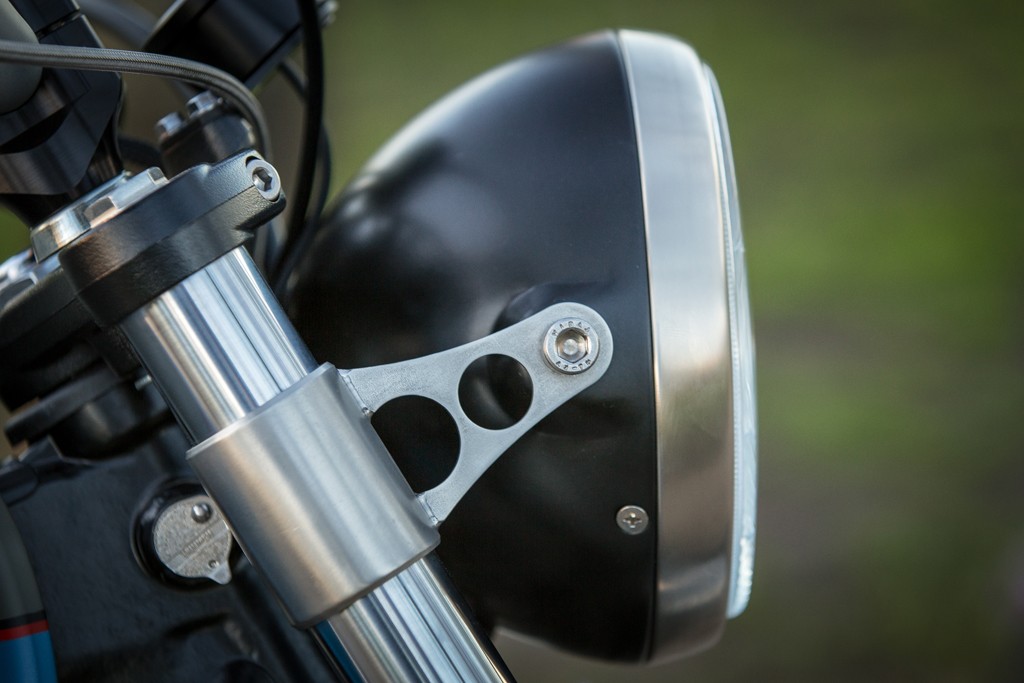 The stunning paintwork for this build was done by D-lucks custom paint workshop who are up along the coast from Bonnefication in Brighton. D-lucks are the guy I want to my paintwork, as really good painters a are hard to find and when you found one, never let them go and these guys are good. 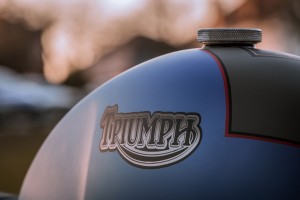 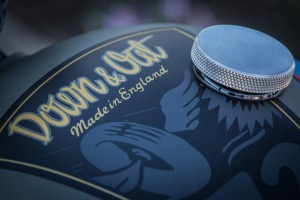 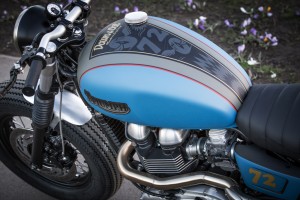 Keep a look out on the D&O  facebook page and website for new Triumph builds as well as upcoming off-the-shelf parts including frame loops and seat pans.
Photography by Simon Krajnyak ©