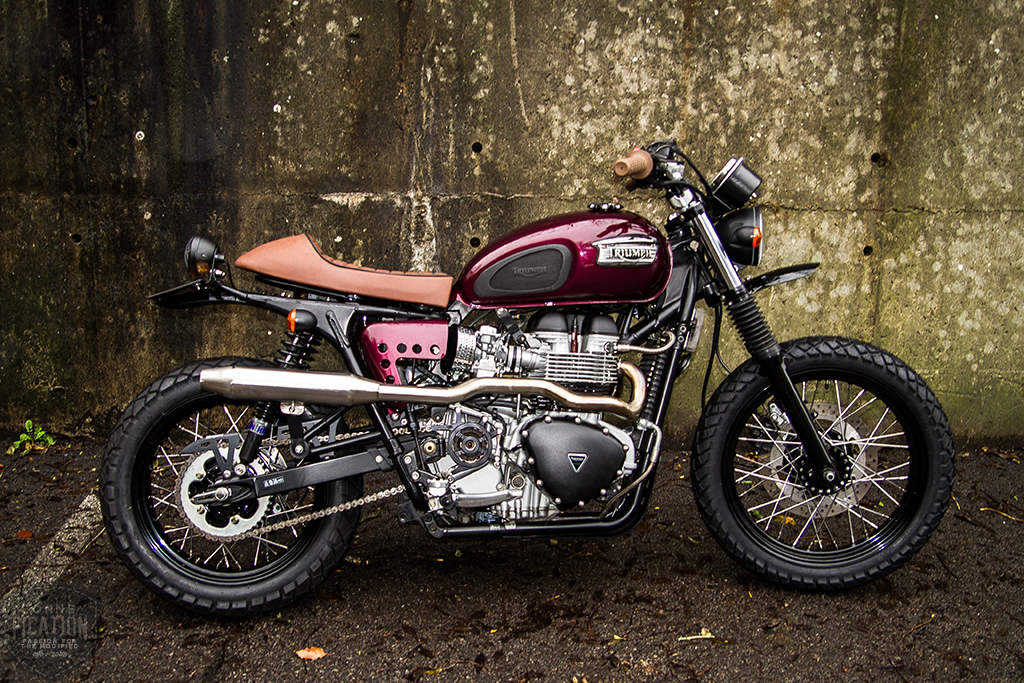 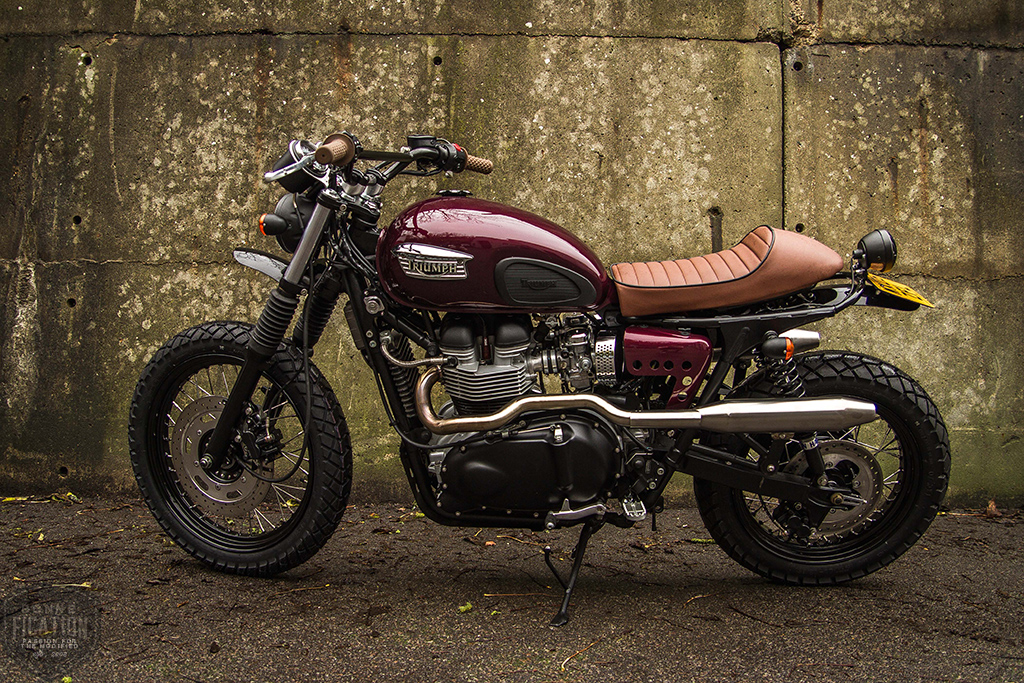 We have shown a couple of Triumph Twins from Surrey based 2 Wheels Miklos here on Bonnefication, first was an original 1973 Triumph Hurricane X75 recommissioning, a bike which has inspired a few modern Triumph customs – next up was their Bonneville Tracker build, based on a 2008 Triumph T100. It was only a matter of time before another custom Hinckley Triumph Twin was to roll out of the former vintage Jaguar garage, and this time it was their take on Scramblerising a Bonneville – Bruce Salamon of  2 Wheels Miklos continues…

“A customer came to see us looking for a Hinckley T100 Bonneville to be transformed into a relatively aggressive and very individual scrambler. He is 6’2” tall and so he also wanted to make sure that he did not look out of proportion on the bike”. 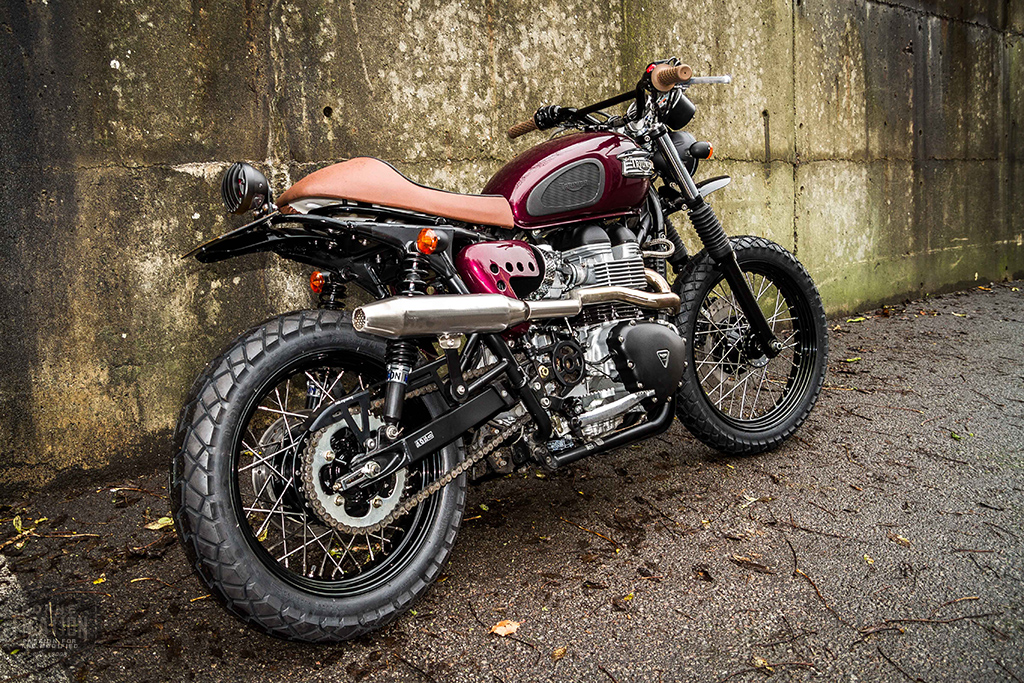 “As there are a lot of Bonneville scramblers about we set out to make sure that his bike would be special. We felt the key design features would be seat height, high level exhausts and a maximum of motocross elements.” 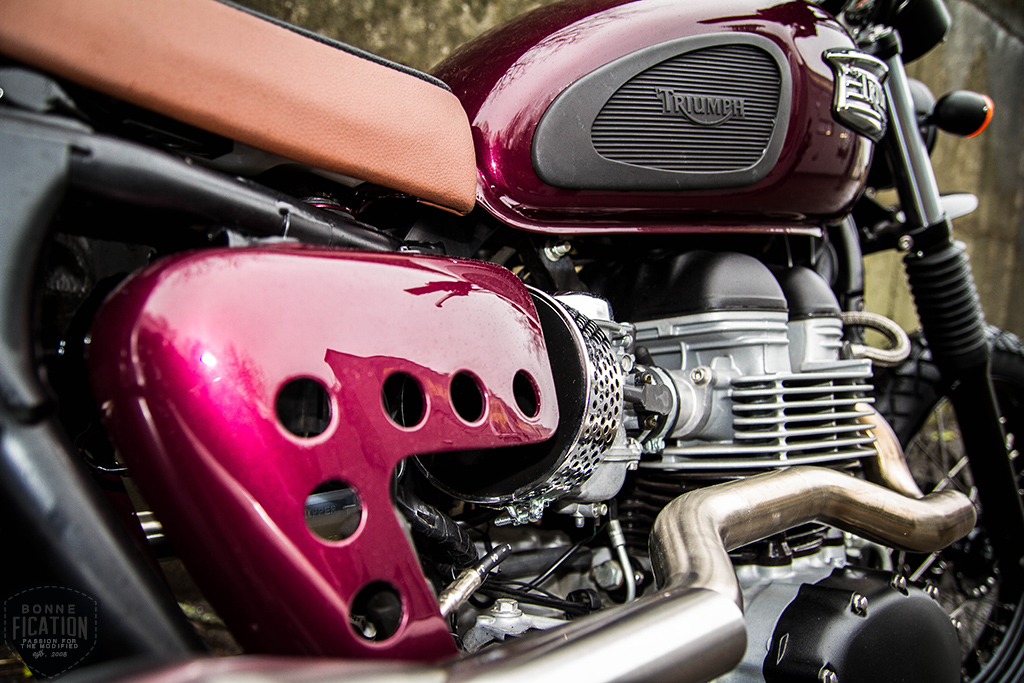 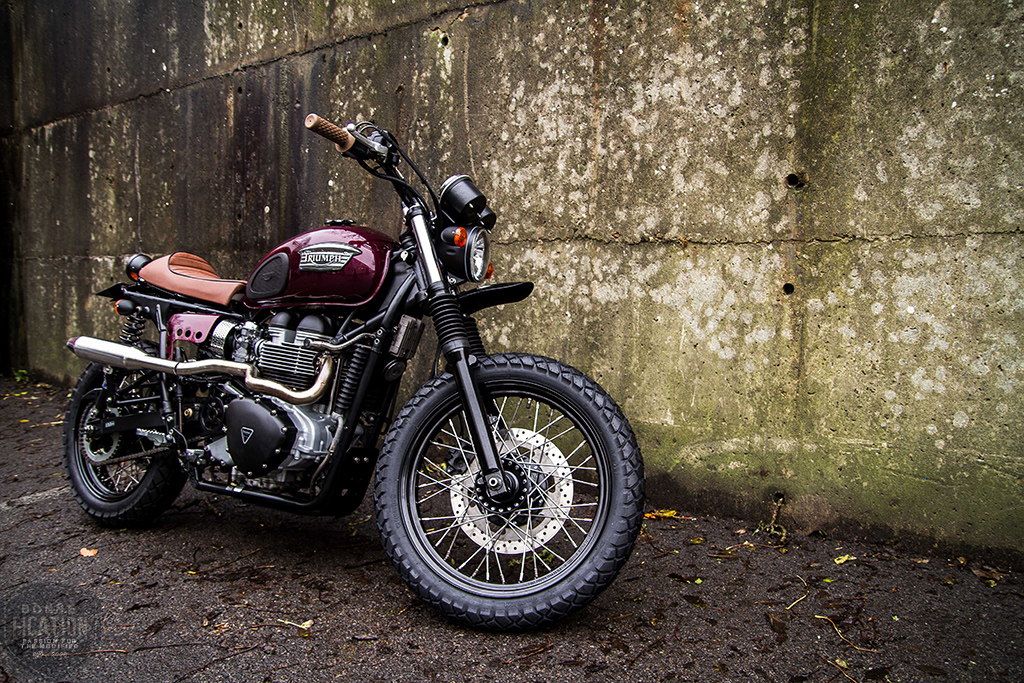 “At the front of the bike we have used a braced Biltwell motocross handlebar with black Café Racer risers and Biltwell chocolate grips. Halcyon bar-end mirrors have been fitted. The lowered headlight is a Bike-It LED light and the stock instruments have been lowered to just above the headlight. The ignition has been relocated to the side of the frame using a Norman Hyde kit. Indicators front and back are matt black bullets. Triumph fork gaitors, a one-off high level front fender and motocross footpegs enhance the scrambler look’. 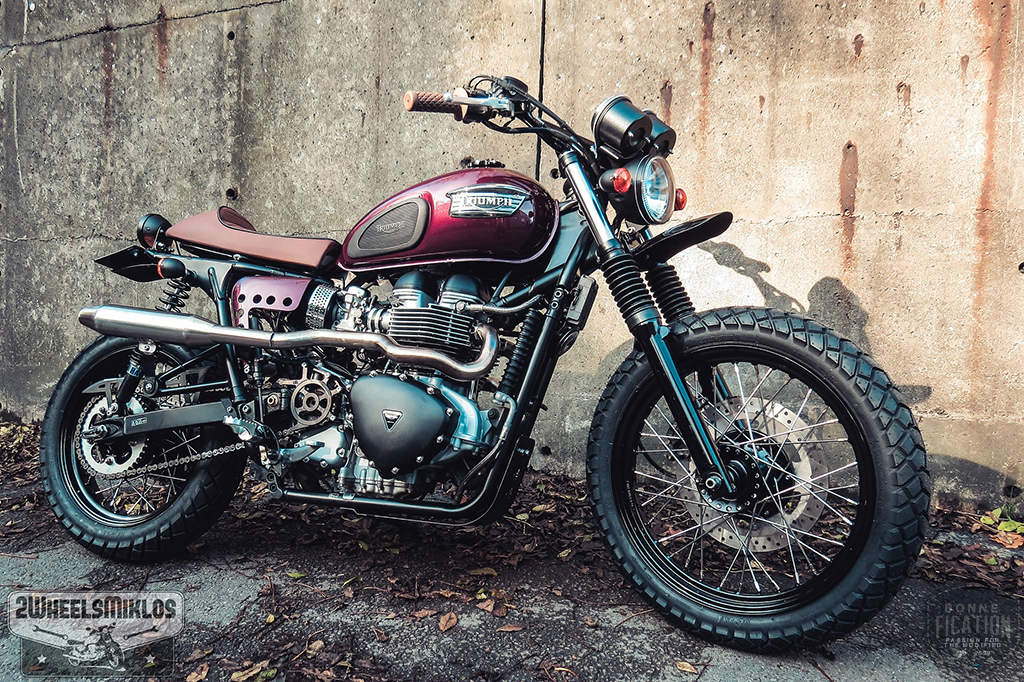 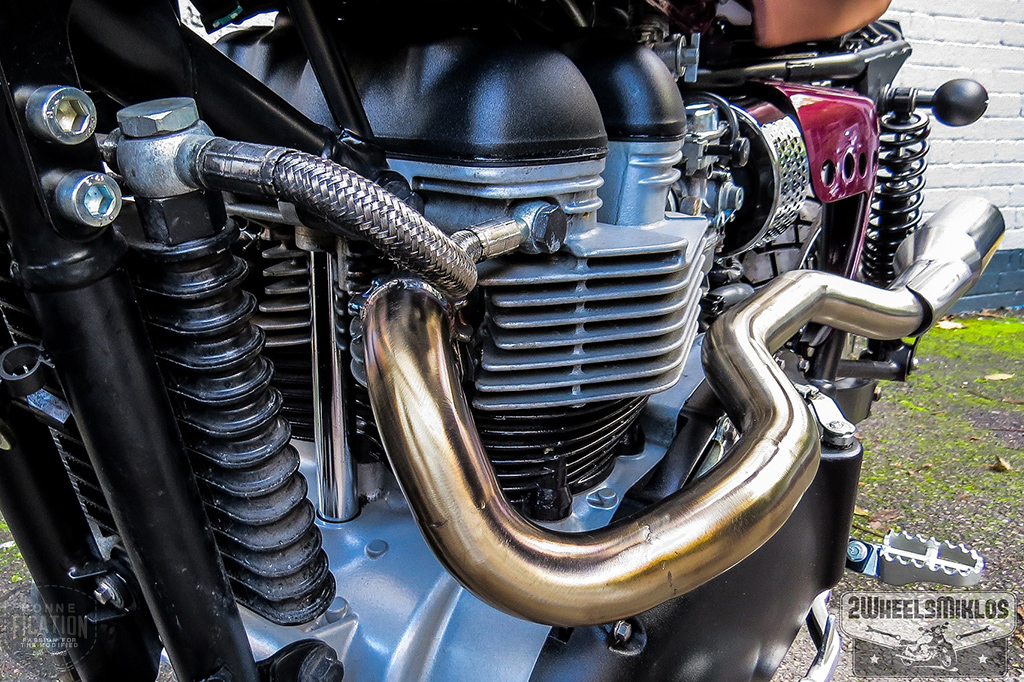 “The appearance of the engine has been enhanced by fitting black engine and rocker covers and classic chromed pancake air filters. High level brushed stainless exhausts were fabricated in-house. The stock side covers were cut down and drilled to give visibility to the heart of the bike. This has been further tidied by locating an in-house fabricated battery box for a small Shorai Lithium battery directly under the seat. The chain guard is now a stripped down MAS Engineering unit and the primary sprocket cover is from Bruce Salamon”. 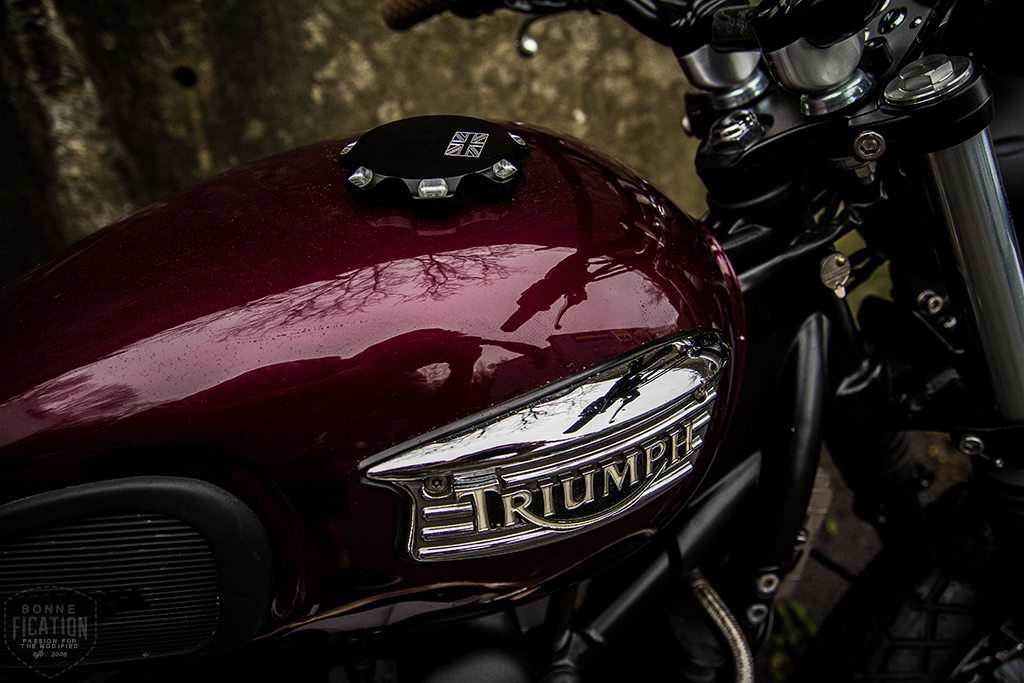 “The paint scheme is black for everything other than the tank and side panels, which are Dark Metallic Raspberry. Paint was done by Cycle Sprays. The tank is finished off with Thruxton badges and a Joker Machine union jack filler cap”.

“The bike is a pleasure to ride and the one-off exhausts do make their presence felt!”

If you like what you see why get in touch with the team at 2 Wheels Miklos or just like theire Facebook page annd while your at it why not follow them on Instagram or if you are a hater of this social media bull, why not just get in touch the retro way and pop in for a chat… but call first, its only polite