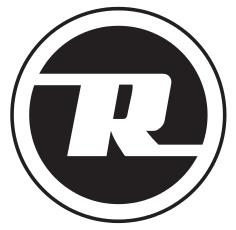 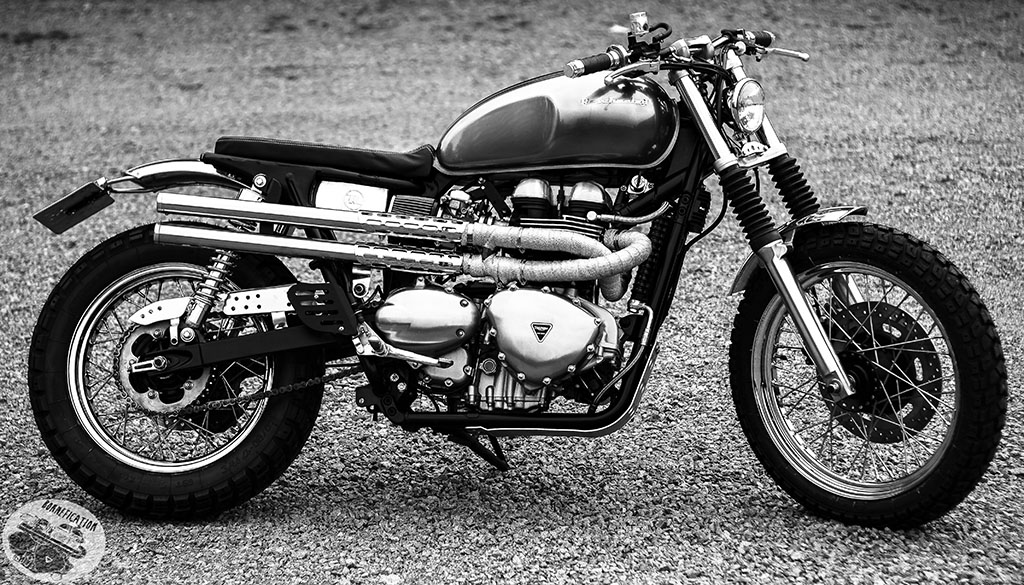 Rewheeled was started in 2011 when Andreas Norum quit his job his job as CEO for the regional Tourism Authority in Dalsland Sweden, and started a new career building motorcycles. Something which Andreas had been doing for himself since the late nineties. Rewheeled represents for Andreas, a combination of a passion for motorcycles, and a lifestyle change that didn’t include a four hour commute to work, allowing the Norum family to spend some quality time together. 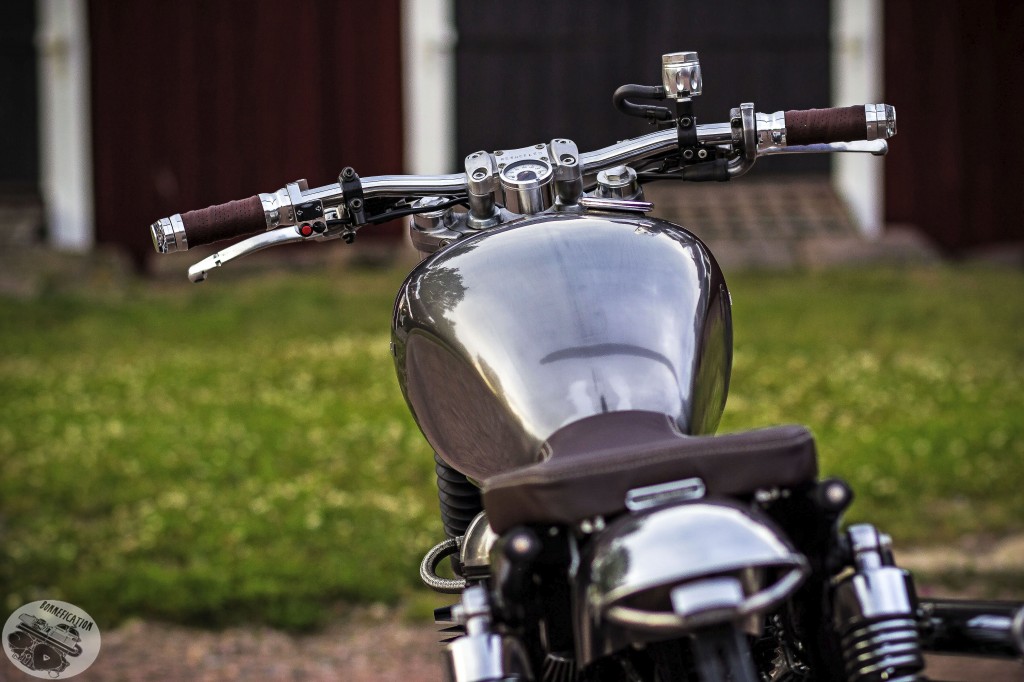 Andreas’s idea for his builds, is to take some of the vast amount of good, but often boring looking bikes, mainly from the 1990’s. Add a littler inspiration taken from Café Racers and Scramblers of the 50´s and the 60´s, transforming them into ‘unique looking’, street legals, custom machines with everyday riding quality. Andreas’s believe’s there is also an environmental side to what Rewheeled is doing. Reusing old bikes’ helps to reduce the negative impact on our planet compared to producing new ones. It is not the answer to the problem but this way of thinking can be a small part of the solution. 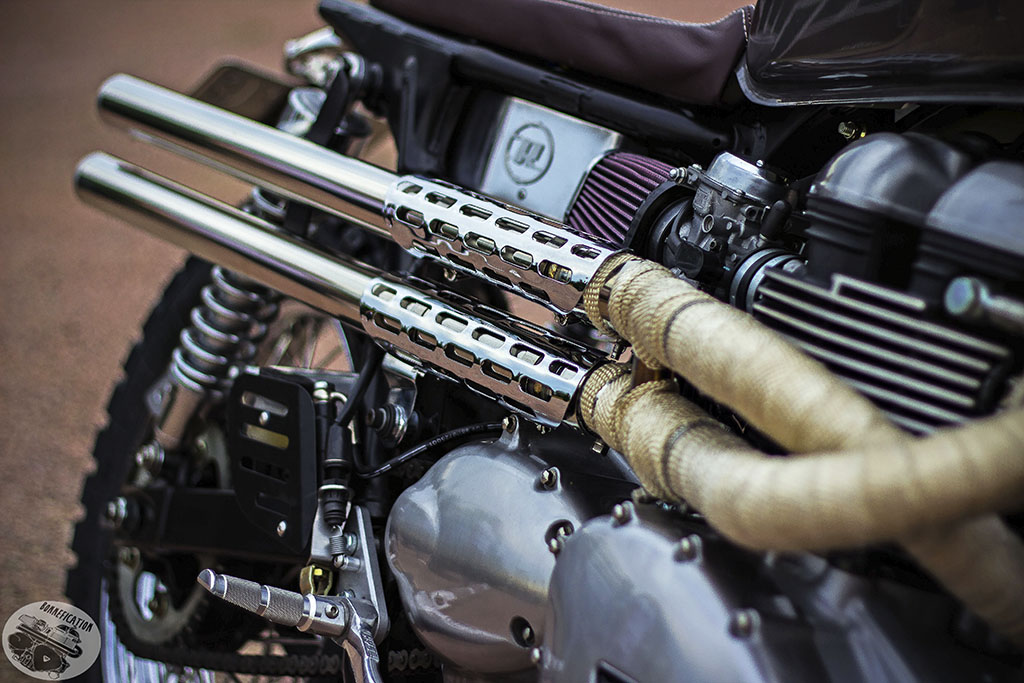 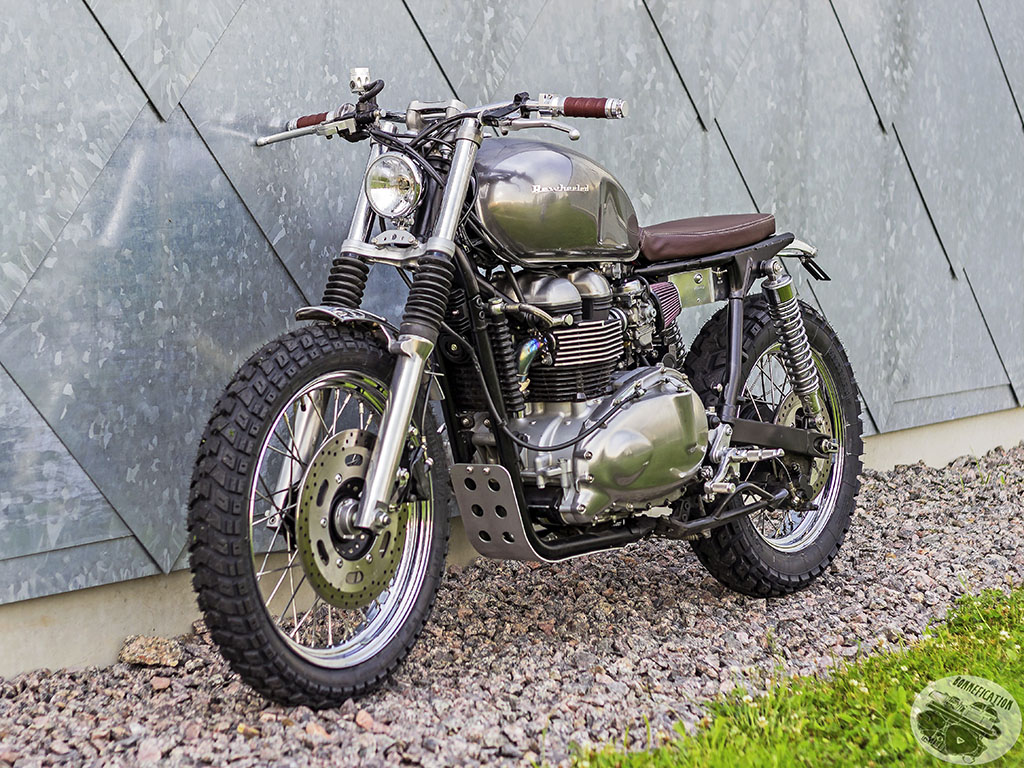 As there is nobody better to tell you about a bike than its’s builder, Andreas gives us the story behind Rewheeled #5…

“The project started in a discussion with the owner of Rewheeled #1 Honda CB750 Café-racer who also is very fond of, and wanted a Scrambler style bike. We decided to try to make a retro-style bike that should look like it could have been a race bike from the 60:s. A lot of metal in combination with brown leather and minimalistic indicators and lights was the game plan. Still we did not want it to look to posh but as a bike that is useable. The donor bike was a 2006 Triumph Scrambler with only 5500 km on it in condition as good as new. In order to get some more metal finish the fork legs, triple tree, risers, gas tank and throttle grip housing were stripped in a chemical bath. After that a little sanding to get the right look, no mirror finish.” 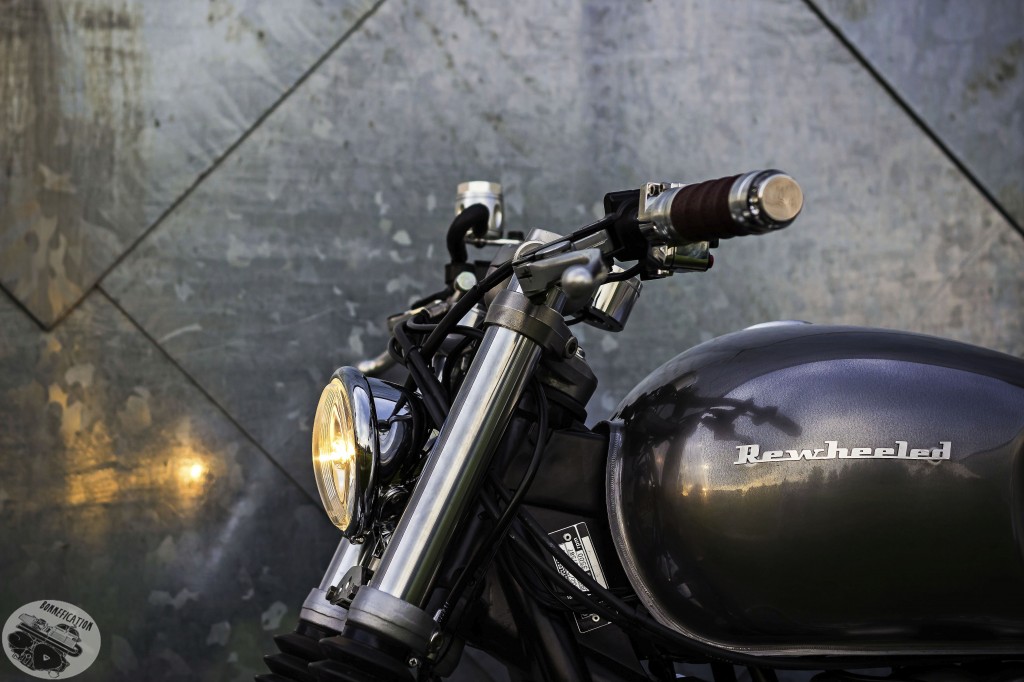 “The gas tank has a lot of scratches from being made that we kept for a raw look. The aluminium parts have no surface treatment but the gastank has three layers of clearcoat. The front fender bracket and the chainguard were given the same treatment but were powdercoated in a chromefinish together with the custommade headlightbracket. Chainguard and hedlightbracket were drilled to match the look on the stock skidplate. Fenders are made from high polished aluminium. The rear frame was cut about 30 cm and a new alubox for the battery and elctrics was fabricated. Battery was replaced with a smaller and lighter Li-Ion unit. A new seatbase was made in fiberglass padded with 20 mm neoprene and dressed in brown leather.” 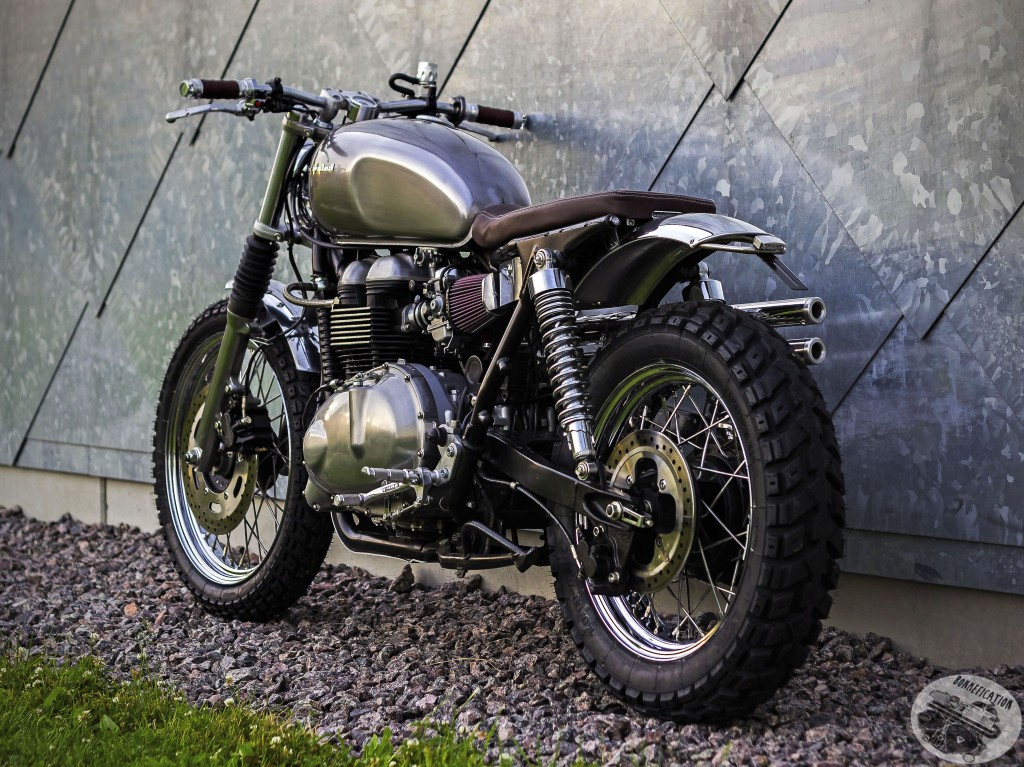 “Handlebar is from german manufacturer Fehling but cut down about 25 mm on each side for a more narrow and racy look. Together with a set of footcontrols from Norman Hyde and a 20 mm lowering of the front it gives a sportier driving position than stock. Barend indicators and the Tiny instrument are from high end manufacturer Motogadget, also from Germany. Front headers of the exhaust is stock but the mufflers are custom made from 1 ¾ inch stainless steeltubes, with baffles that makes it sing instead of roar. Carbs are rejetted to work well with the new exhaust and the K&N oval podairfilters. To get a clean handlebar a small CNC machined alu housing for the lefthand side was used, this holds the controls for high/low beam, indicators and horn. The right hand controls, main switch and startbutton was moved to the left sidepanel with “start” and “main” embossed in the aluplate.”

“The rectifier was moved from its original position under the headlight to the frame above the oilcooler and the ignitionlock to the right side under the gastank. Horn was replaced with a smaller unit and moved slightly downwards. The small rear indicators in the frametubes are only 18 mm diameter but still e-approved. Rear and brakelight is a LED unit which is built to fit in the lower part of the seat. Fork, rearshocks and wheels are stock and the tyres are the Heidenau K60 Scout that work on both gravel and paved roads. Apart from the depainting and clearcoating of the gastank all the work on this bike was perfomed inhouse. The pictures were shot by the very talented Mattias Hallgren who is an orthopedic surgeon when he is not shooting my bikes.”