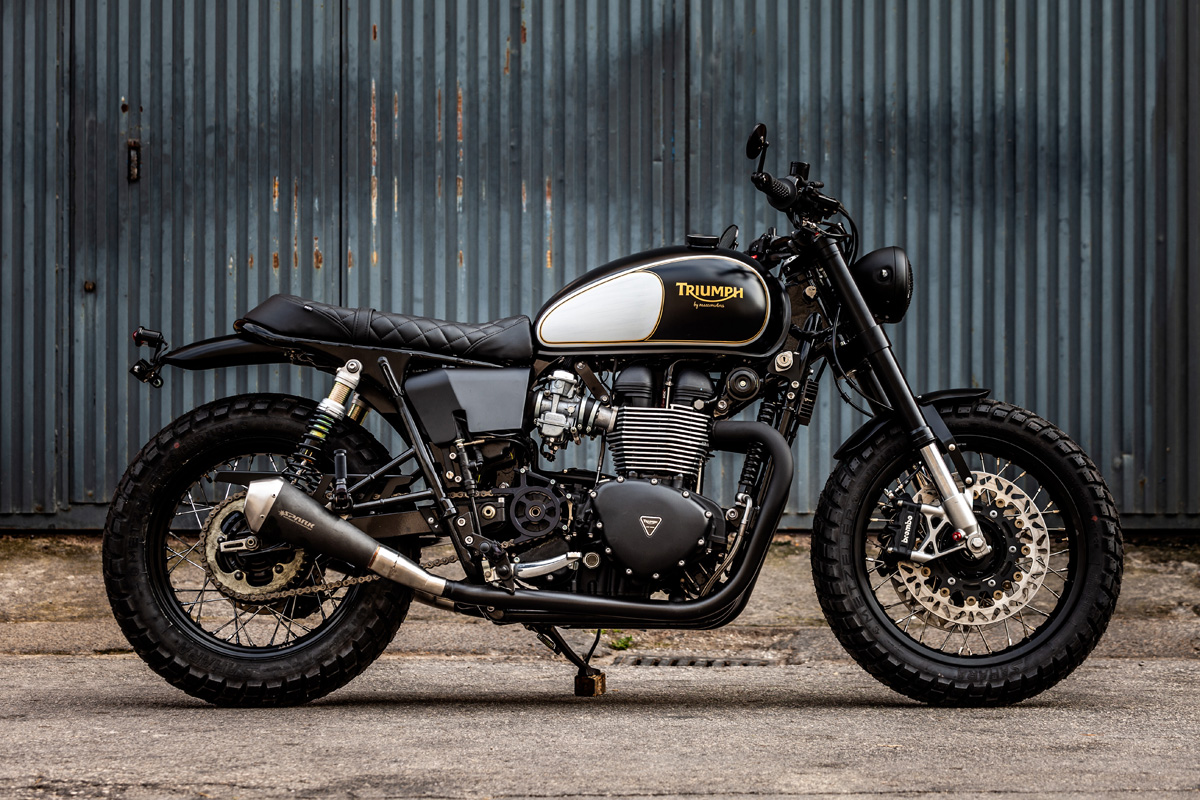 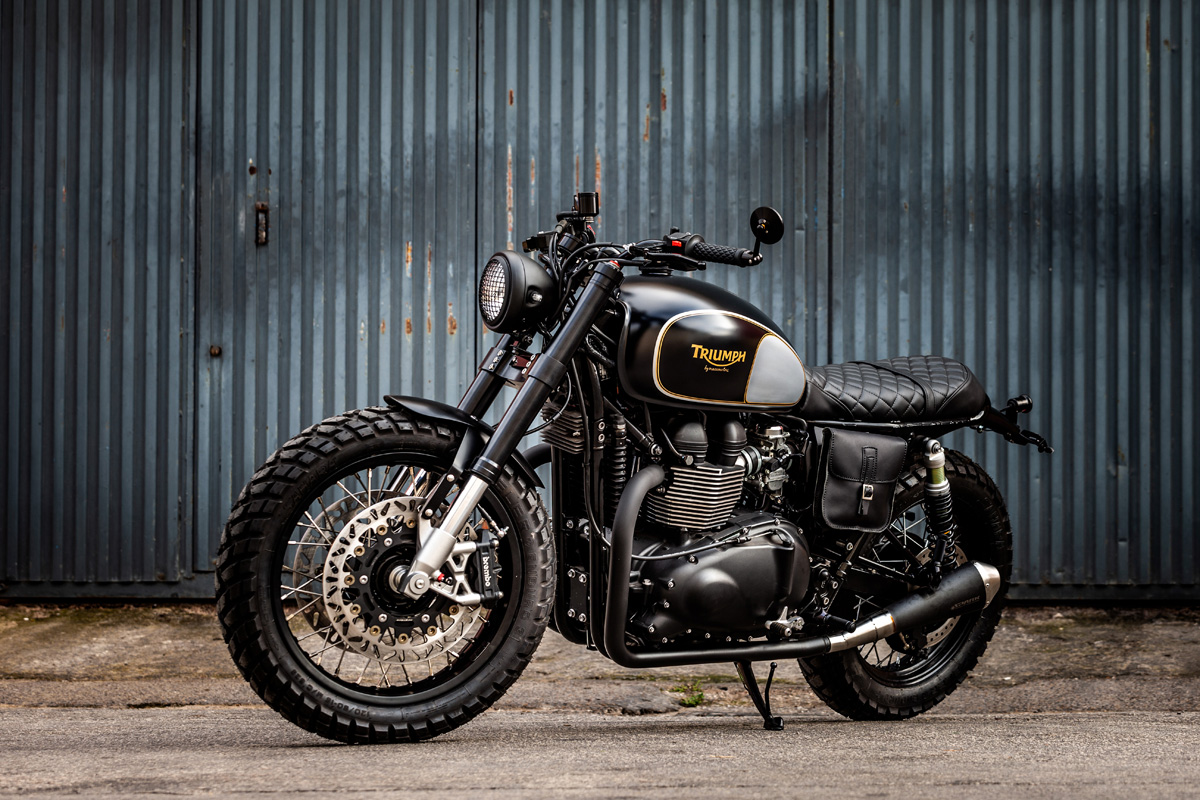 The latest Dusty Pearl inspired Triumph custom is the “Black Star”, and is based on a mag wheeled 865cc EFI air-cooled Triumph Bonneville, which had a mere 1,800 kilometres on its clock. This particular Hinckley Twin was built in 2015, the same year Bonnefication showcased the Dusty Pearl and the last year of manufacture for the venerable air-cooled Triumph Twin. 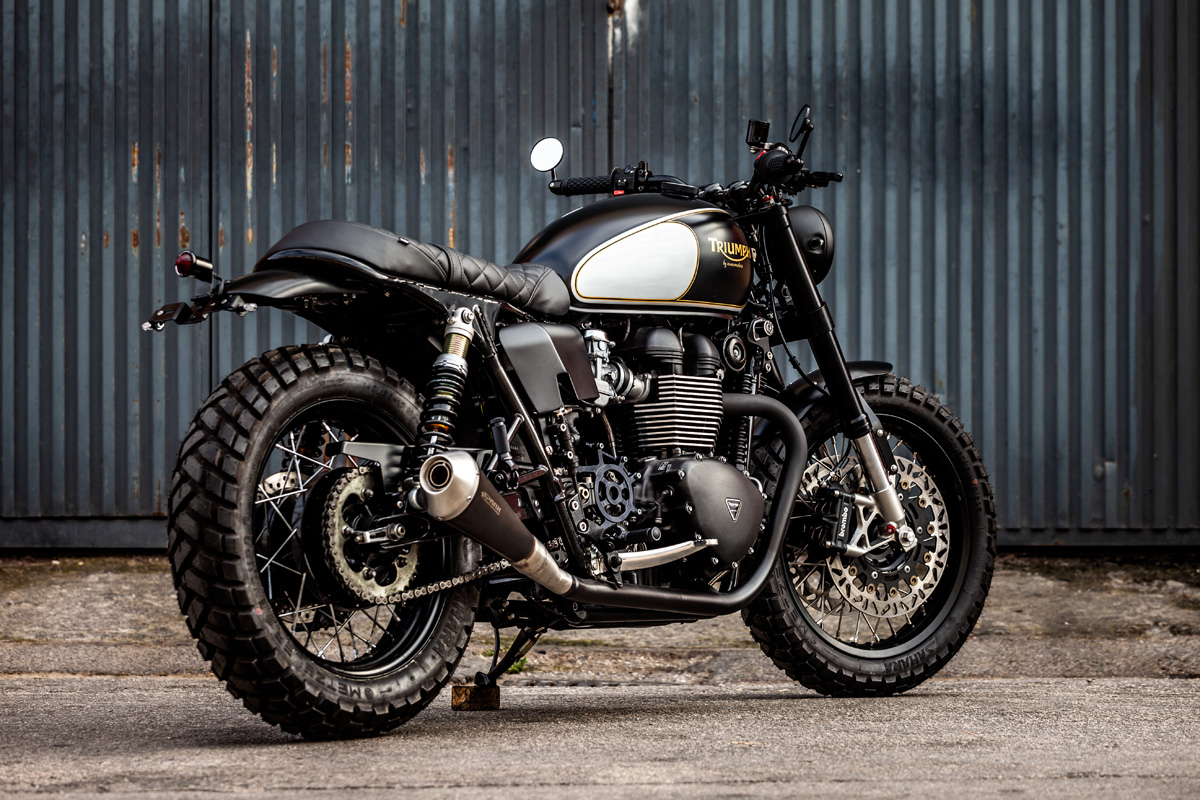 Like its predecessors, the subframe was shortened, looped and blended to match. With the Bonneville then being fitted with a Macco Motors cross stitched seat, fibreglass mudguard and retro tail light with numberplate bracket which also supports a set of micro turn signals. 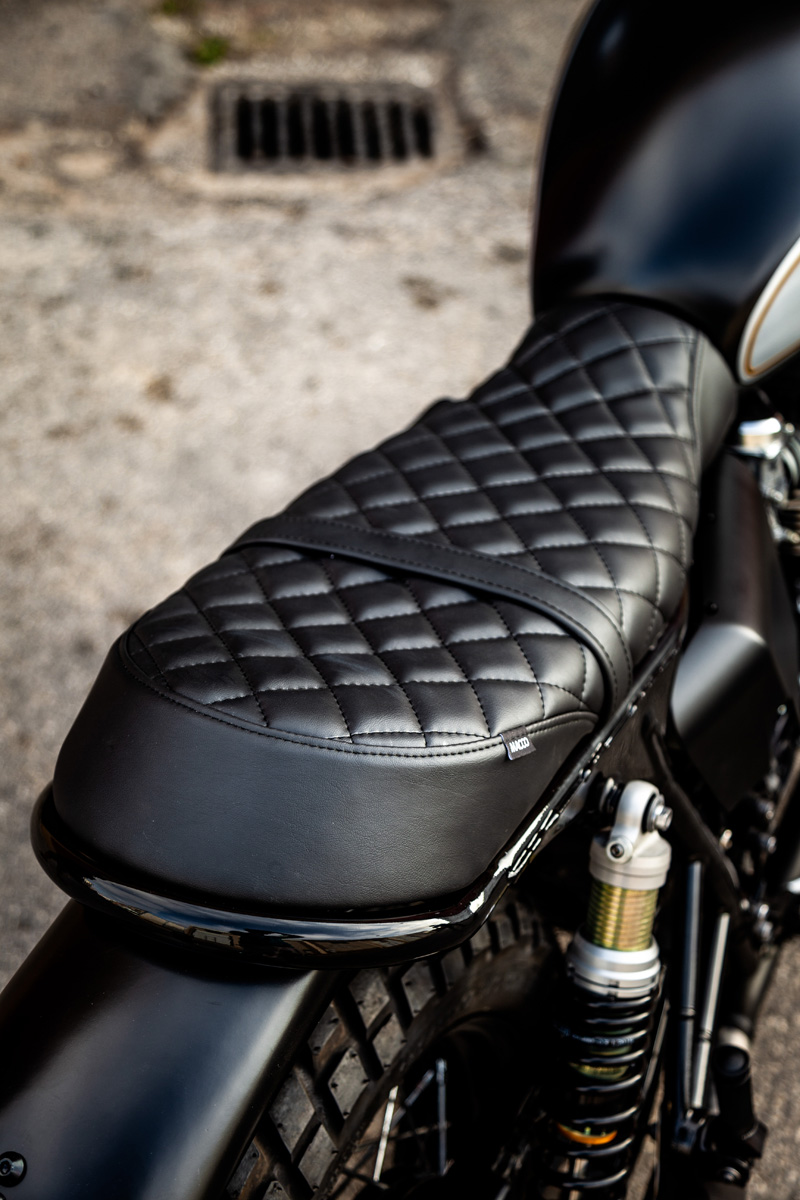 As you would expect the petrol tank on this Bonneville has been finished in the trademark Macco Motors black over raw metal. With the side covers replaced with custom pieces painted in Jose and Tito’s colour of choice. With the left-hand side also featuring a custom black leather bag, perfect I imagine for your waterproofs or even a small disc lock. 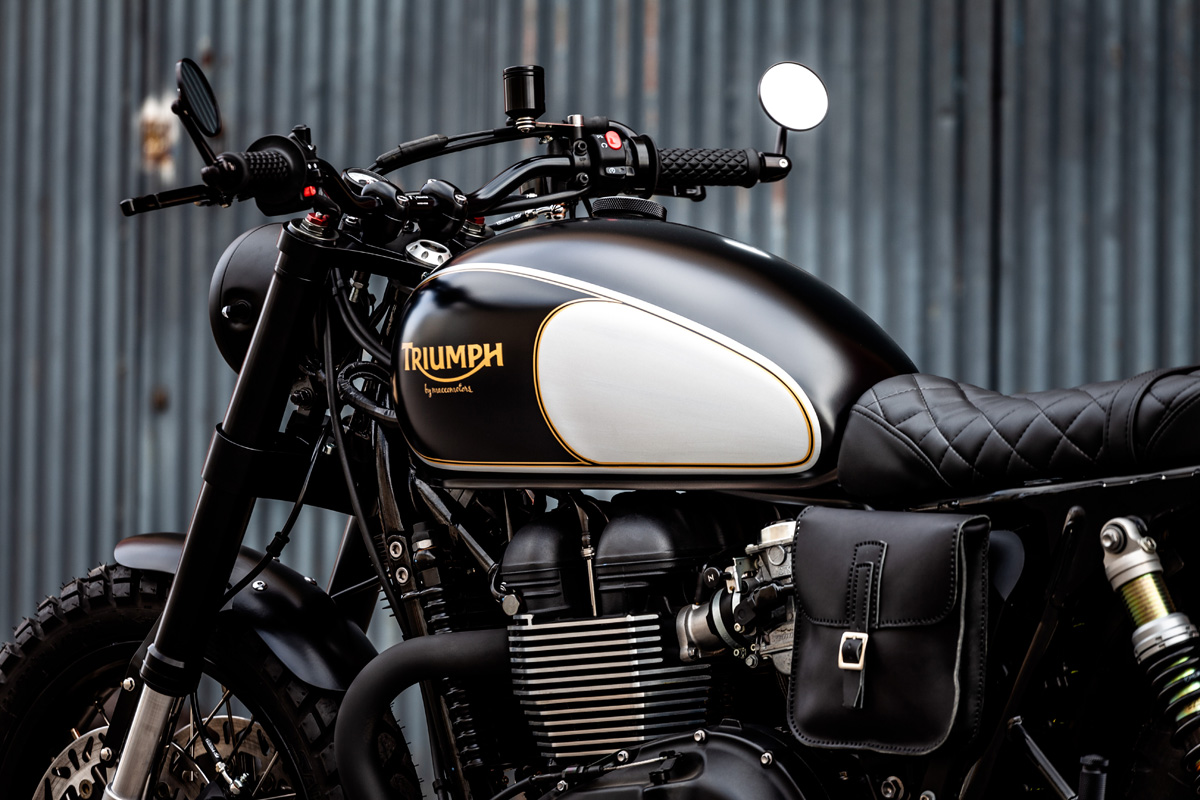 Sensibly the rear suspension has been replaced with a set of shocks from Öhlins, paired with a  fork upgrade from Macco Motors – who fitted custom triple trees and a set of Showa USD forks. 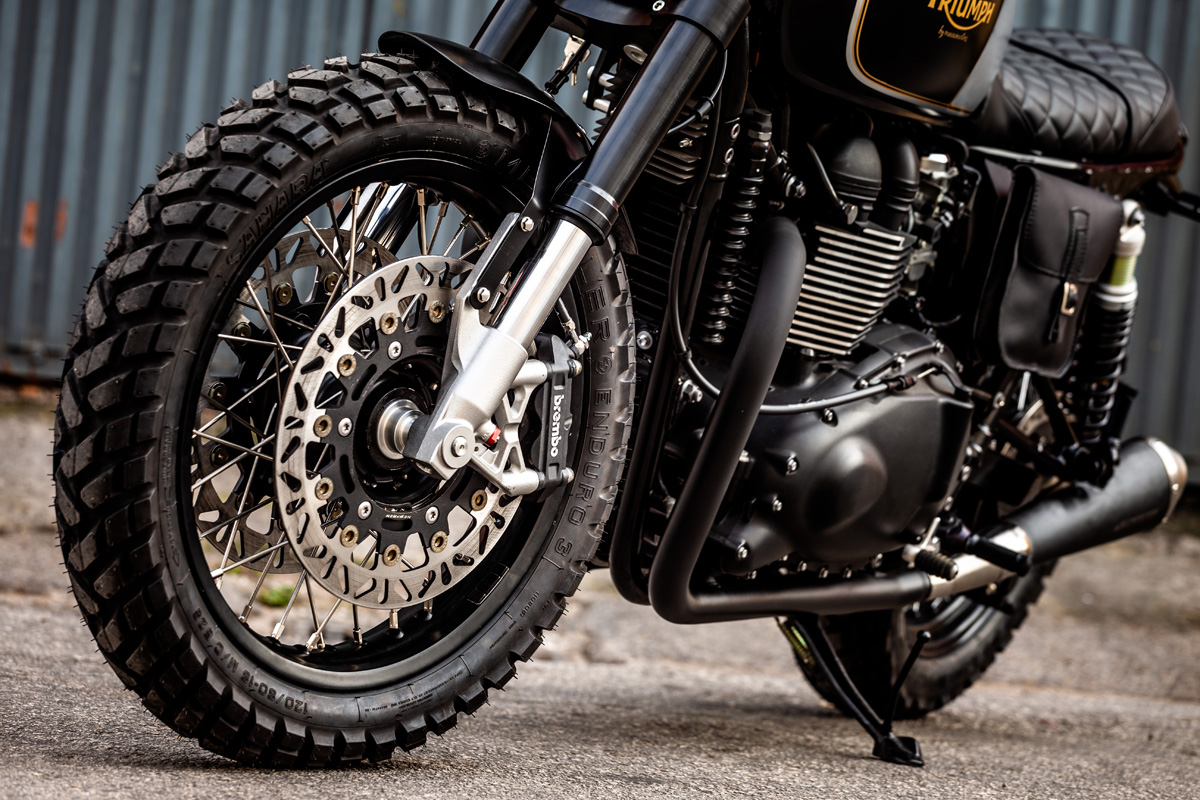 The USD forks allow for the fitting of dual Brembro’s, giving this air-cooled Hinckley Twin a super cool liquid-cooled T120 look, though without the cost, or all that ride by wire nonsense. 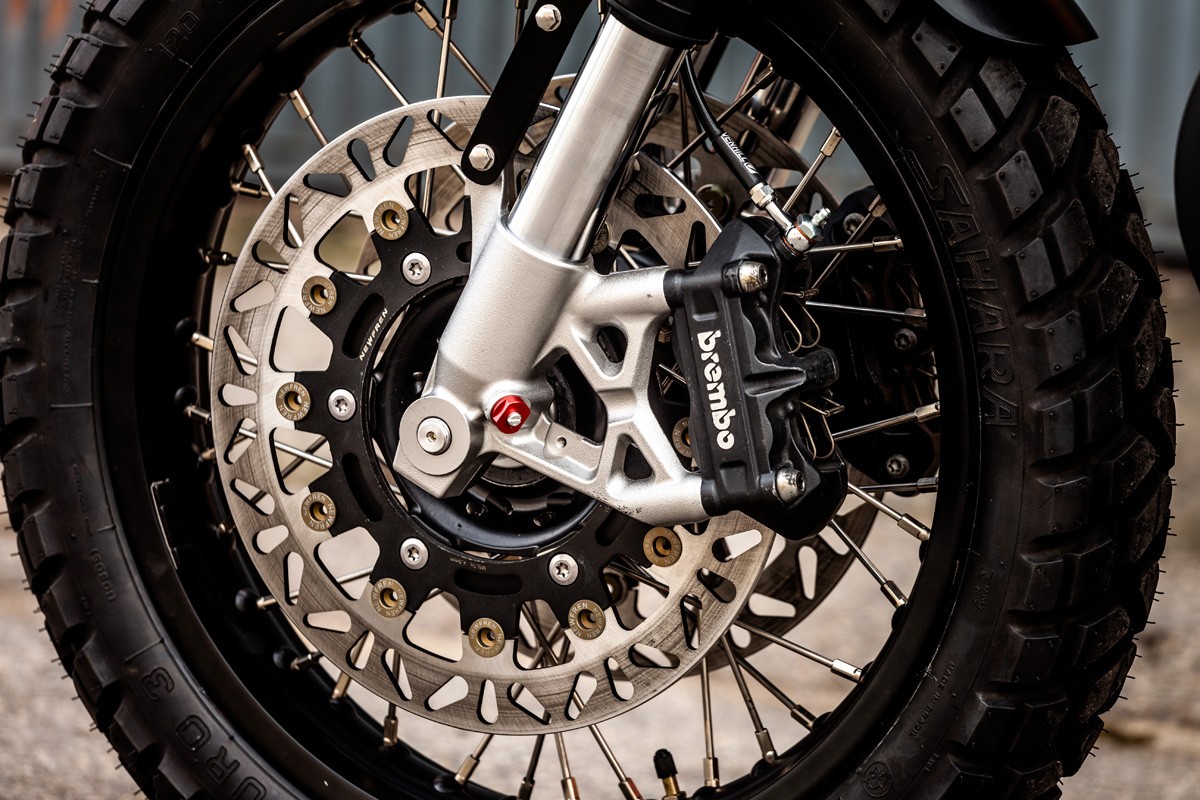 The stock front wheel on the air-cooled Twin was not Twin disc compatible, so a new 18″ rim was laced to the hub and fitted with a Newfren disc, with both front and rear wheels being shod with a set of Metzeler Enduro tyres. 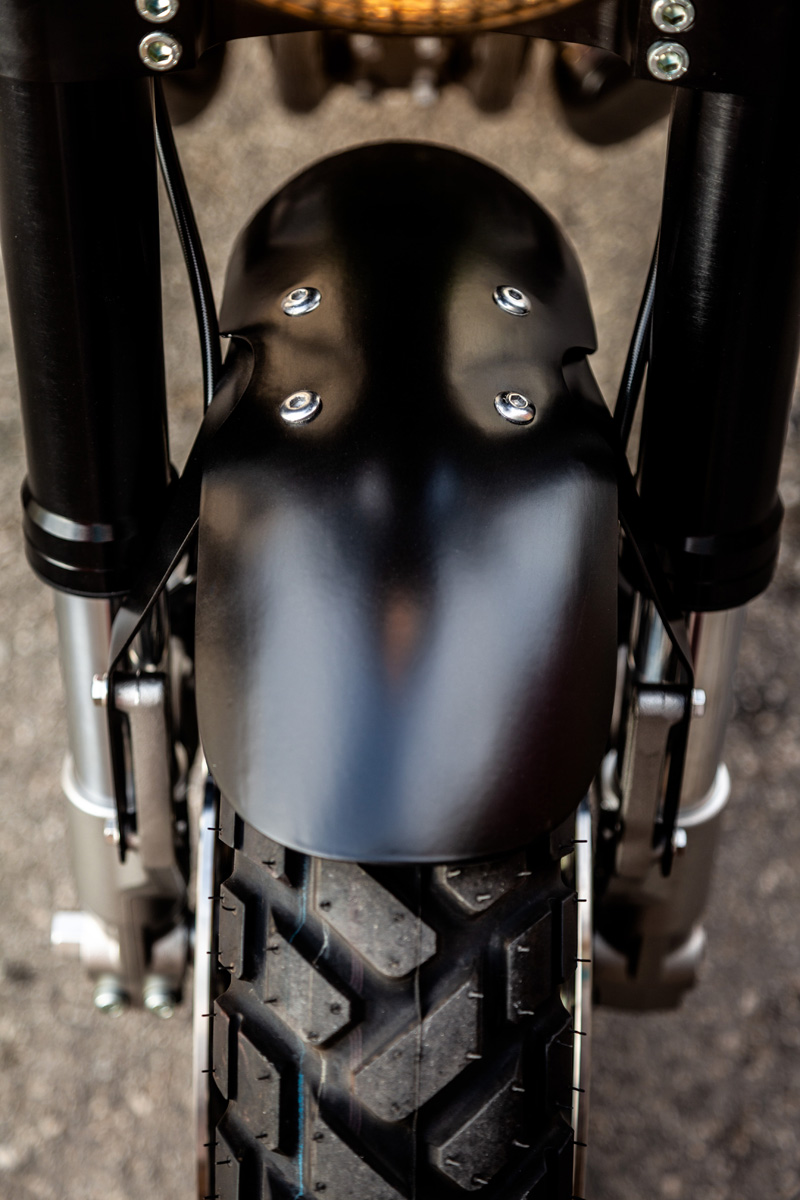 This Triumph’s front end now sports a Macco Motors fibreglass shorty mudguard, and a black bottom mounted 6½” grilled headlight fitted with a set micro turn-signals. With the rectifier and ignition switch both relocated to the usual places. 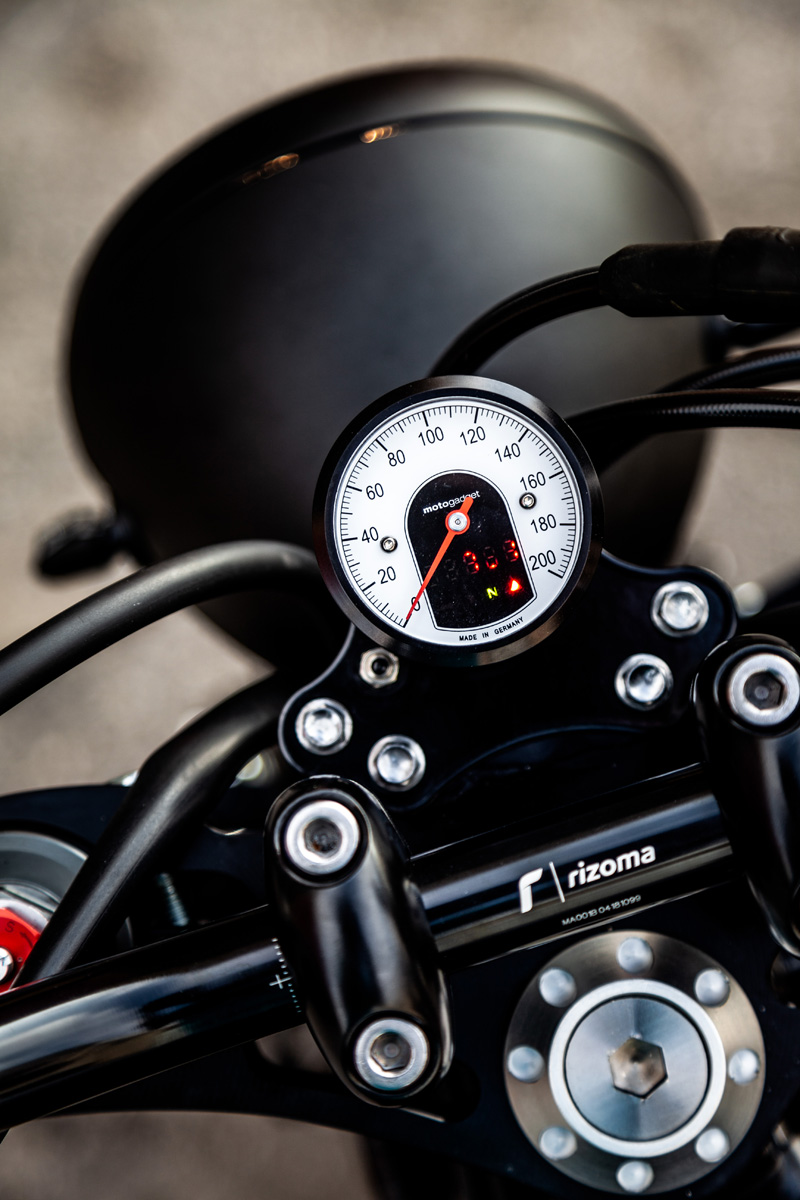 Above the headlight sits Motogadget’s excellent Motoscope Tiny speedo. Which is connected to this CANbus model Triumph Bonneville using the Motogadget m-tri adapter. 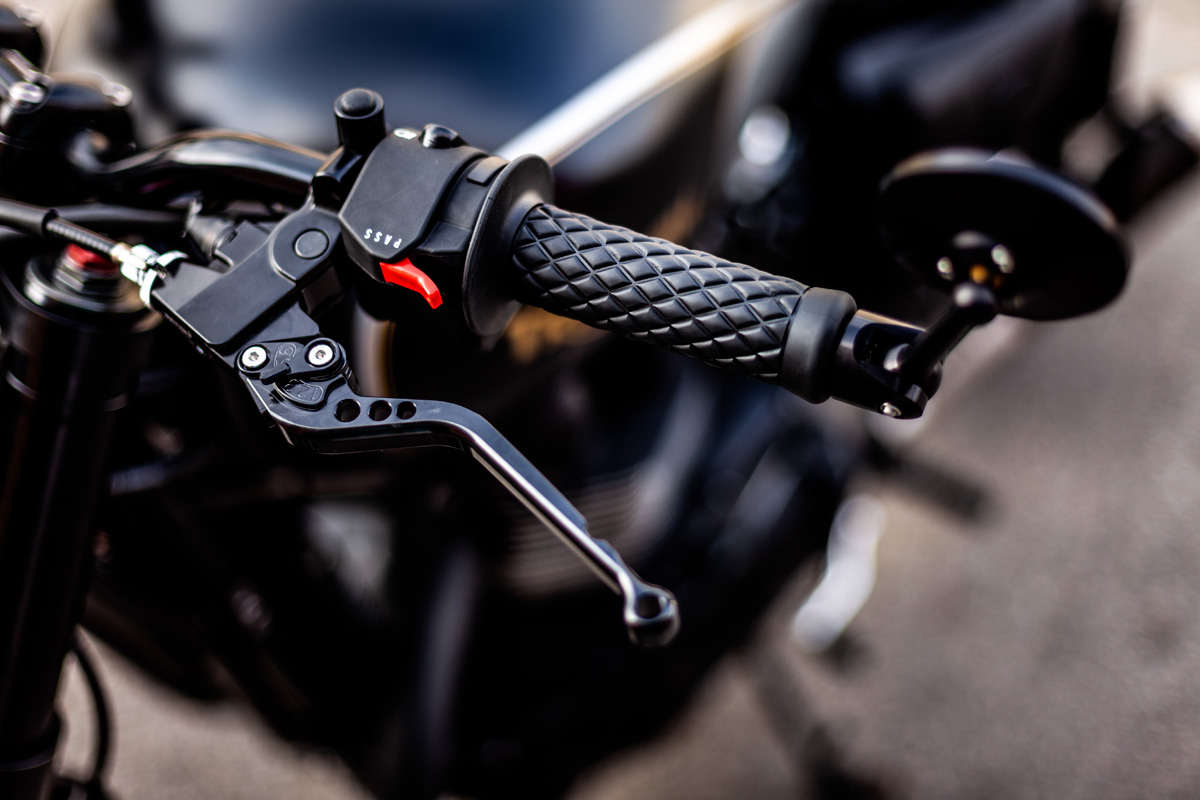 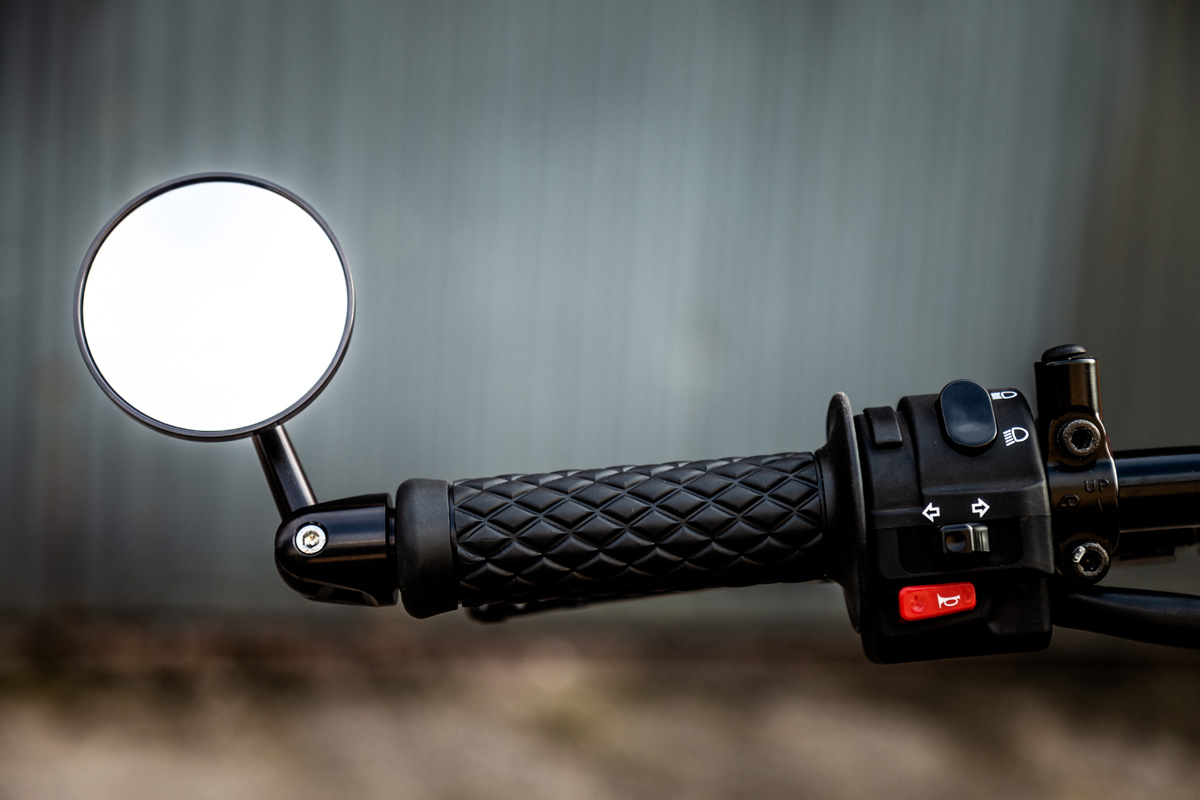 The Tiny speedo takes us on to a black 22mm Rizoma handlebar sporting black racing style clutch and brake levers, a Rizoma brake fluid reservoir, Biltwell grips, a set of practical and not hipster (style over safety) bar end mirrors, even though the stock switchgear was retained, it has made little difference to the overall aesthetics to this area. 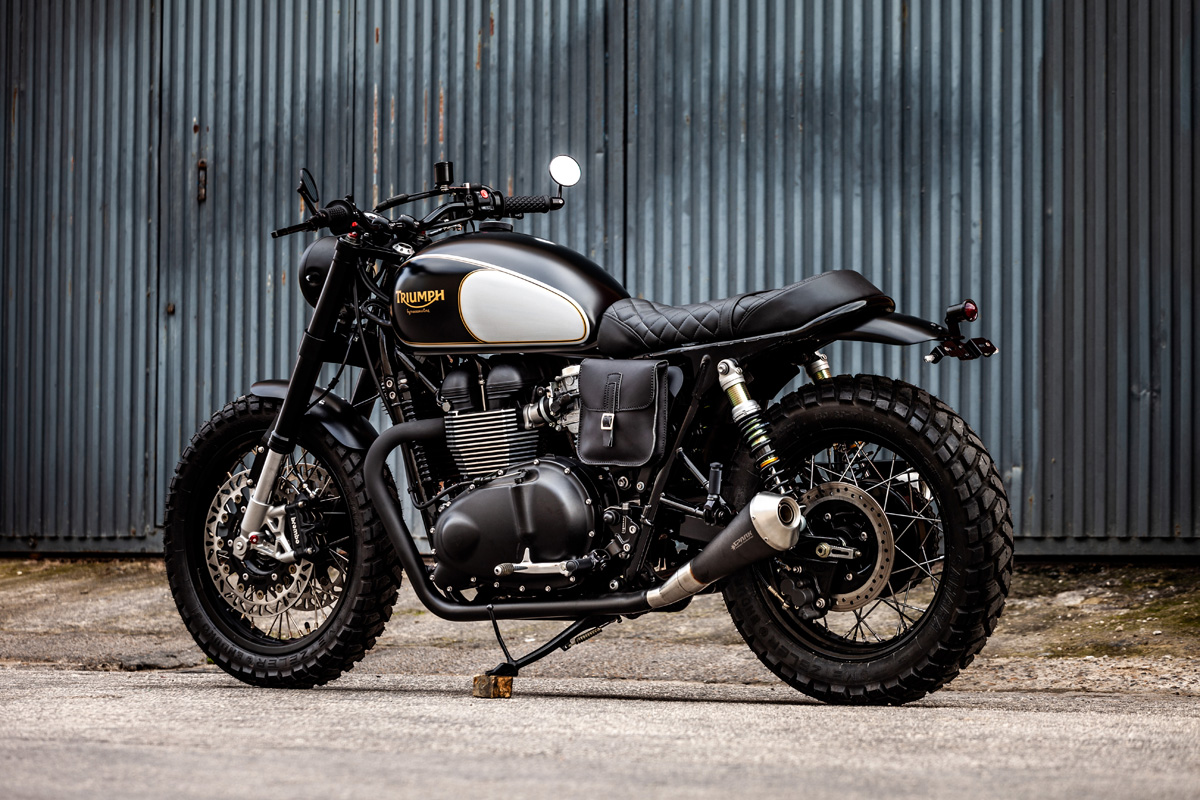 When it came to the Bonneville’s sound, the Macco team wanted to adapt a  Sparks shorty exhausts mufflers to fit the Bonneville.  Which I’m told the team are ‘highly satisfied with’ in both performance and sound, and I might add, in looks too, that black ceramic coat looks the business. 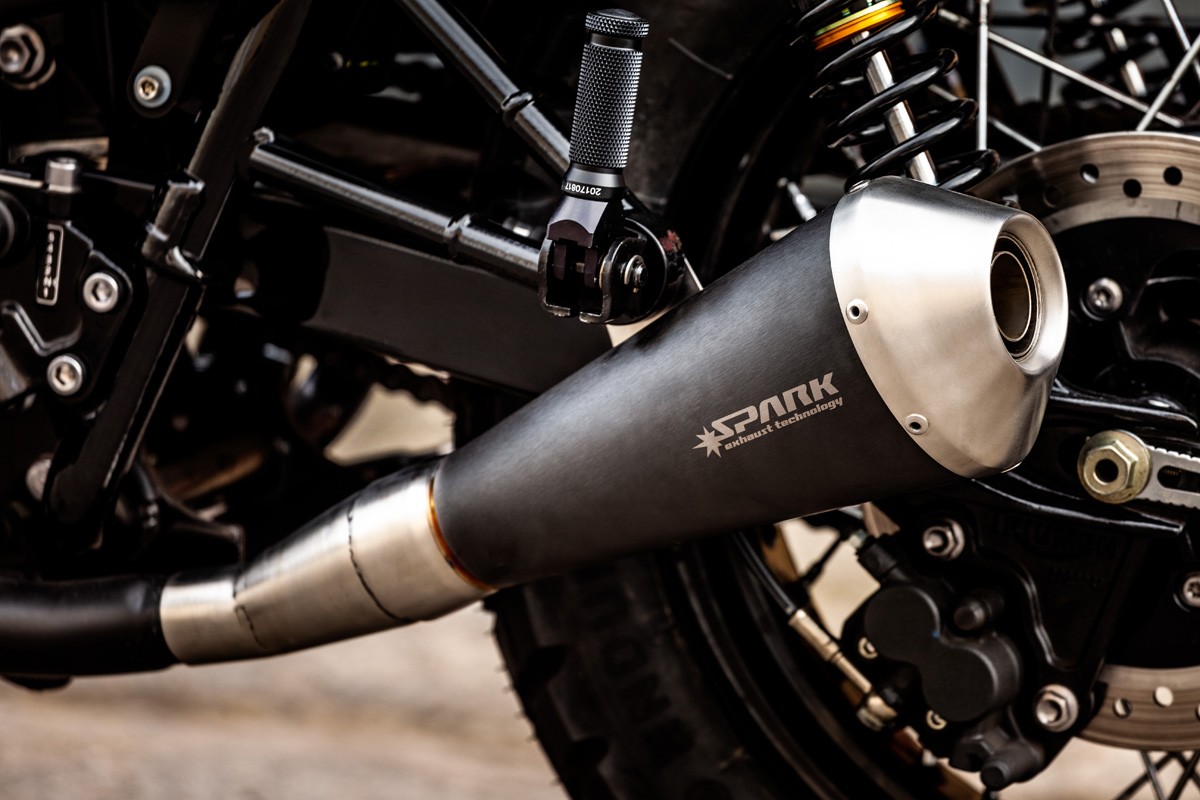 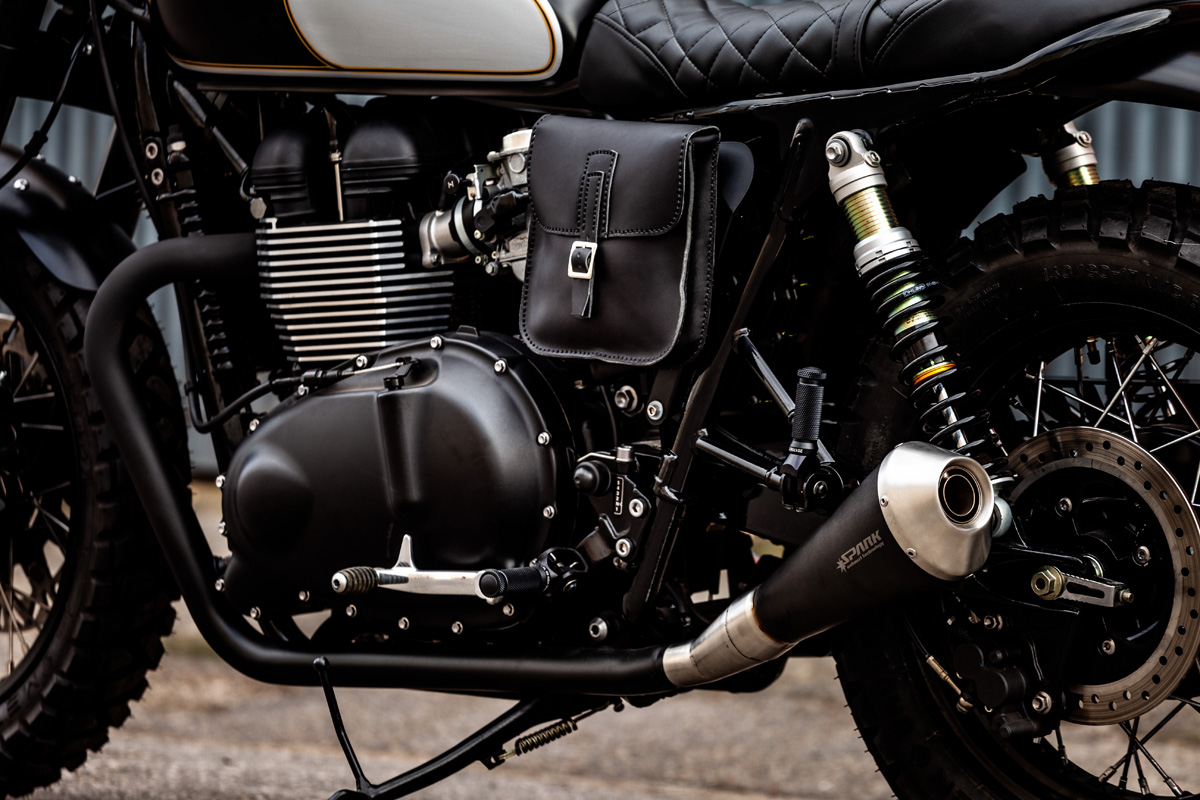 The Black Star is another great looking build, one in a long line of builds which the Macco Motors team should be proud of. As should their owners! 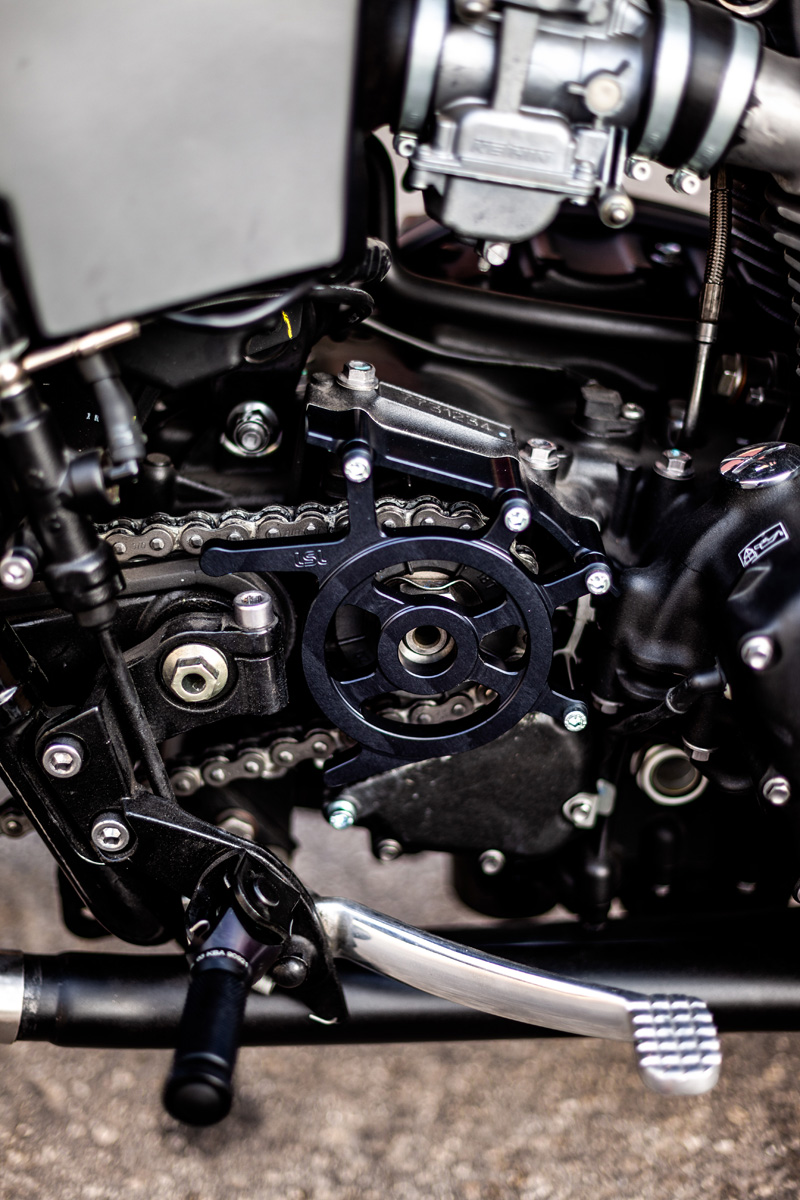 This particular build is for sale, if you are interested in owning something classic, yet ultimately cool. get in touch with Macco Motors via the links below.