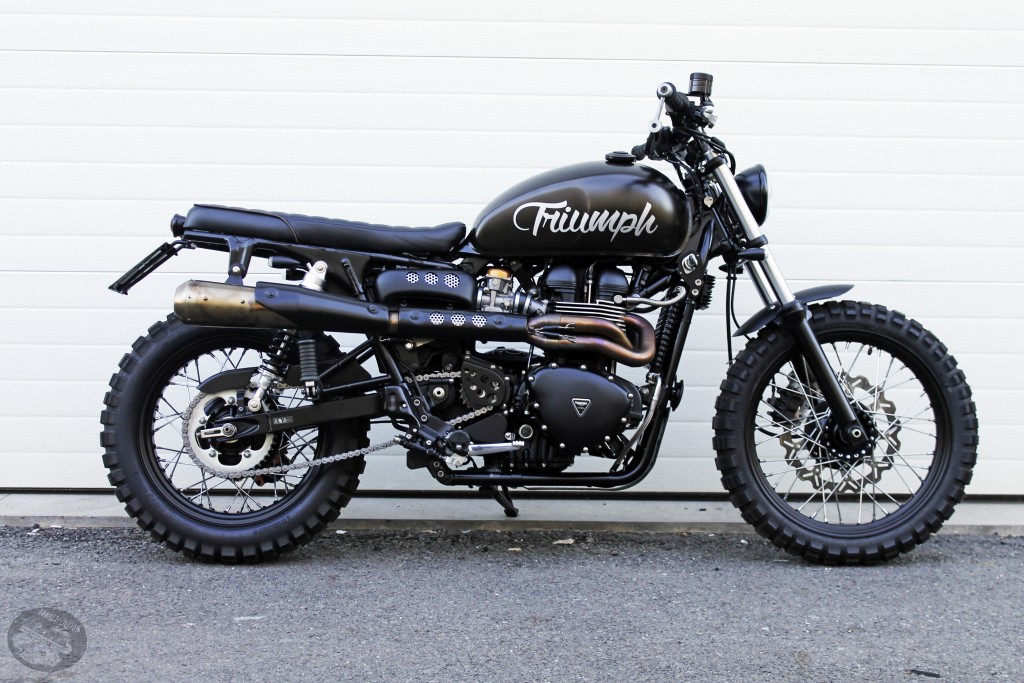 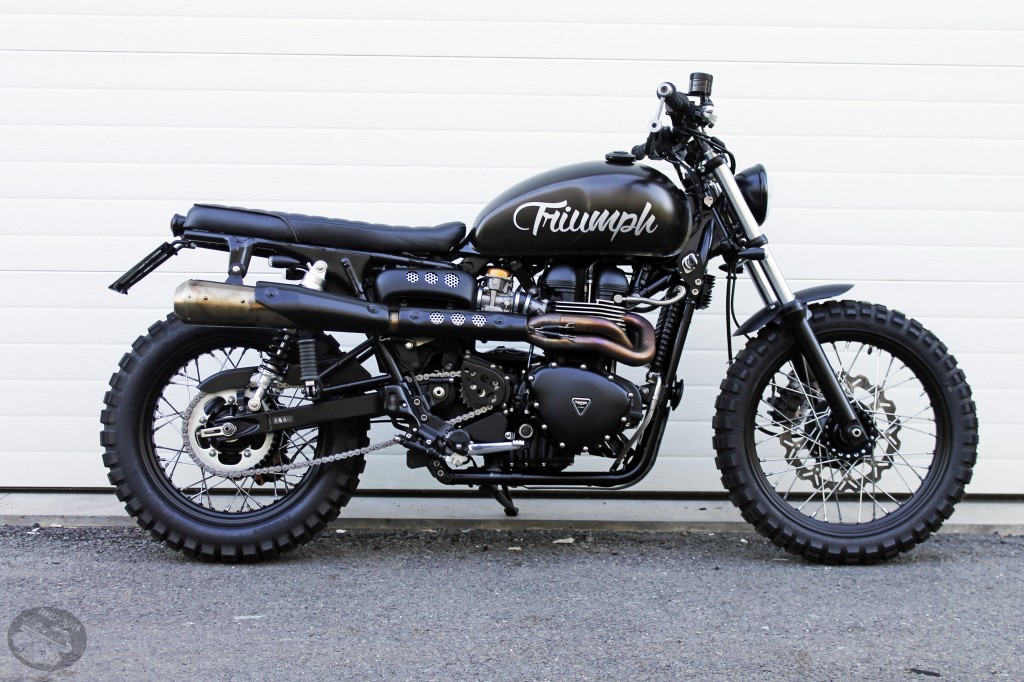 ‘Why listen to One Direction when you can have the Rancid?’ so say the guys at Dagger Cycles, when talking about what they do. Dagger Cycles are another Italian workshop that has focused its creative eyes and talents on the Triumph. This build is the second using the Hinckley Twin, the first being based on a Thruxton. On this occasion, the client, Herbert, wanted a ‘Less is More’ approach to the build with added ‘naughtiness’. One key request from Herbert was that the Scrambler needed to appear ‘shorter’. 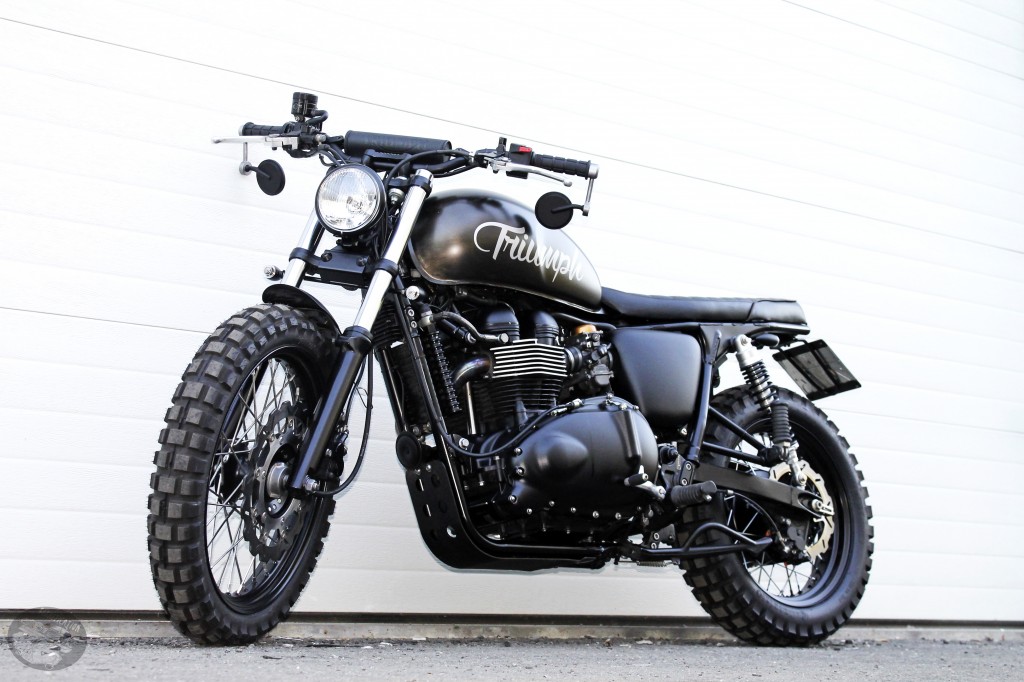 “Customizing a bike is more or less like listening to punk music. You can have it hardcore and screaming loud or easy listening and simple. It’s always punk, it’s always a middle finger against the pop music but the chords, the voice, the riffs are completely different…” 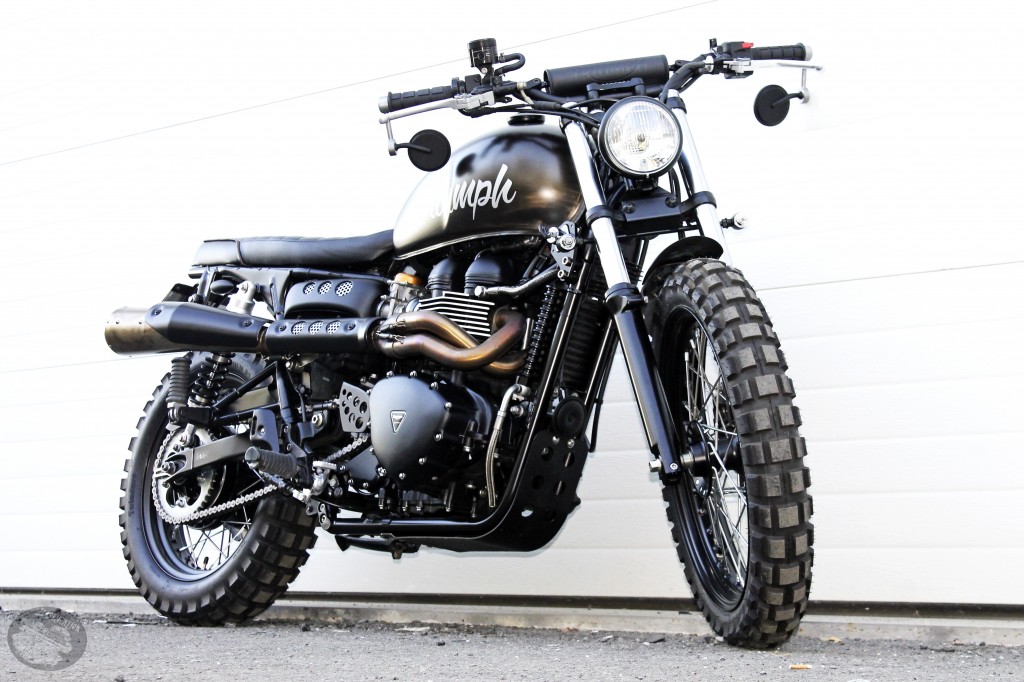 The easiest way to make the Twin look shorter is obvious; just chop-off the last four inches of the frame, just behind the rear suspension mounting reinforcements, and tad dah!. But taking a cutting disc to a perfectly good bike does take guts for a client or homebuilder. Though many consider doing so gives the Triumph Classic Twin a more balanced appearance. On this occasion, cutting was out of the question, as Herbert wanted the frame of his beloved Scrambler to remain untouched. So something else was up for the chop. 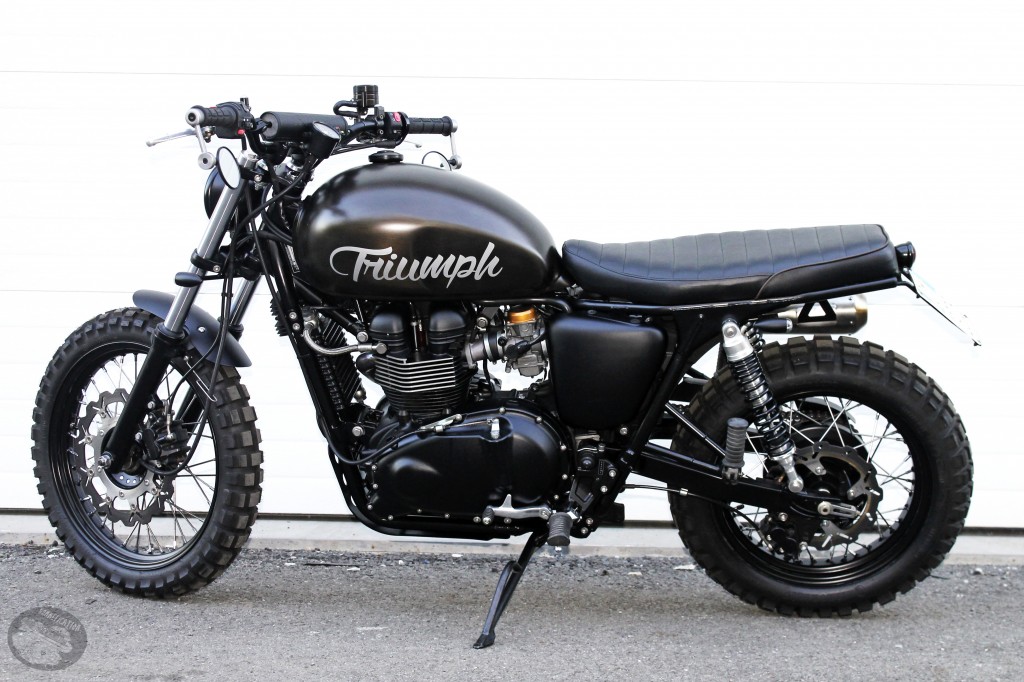 Roberto and Paolino, who make up the team at Dagger Cycles, achieved this by removing the stock mudguard and fabricating a fender eliminator. A new seat was made, which was thinner and shorter that the original item, but not too short, as it still needed to be practical for carrying a pillion. A Shin-Yo LED Bates style rear-light and bullet turn signals finish off the back end of the Scrambler, the turn signals and taillight both being mounted to the bike by brackets fabricated by Roberto. 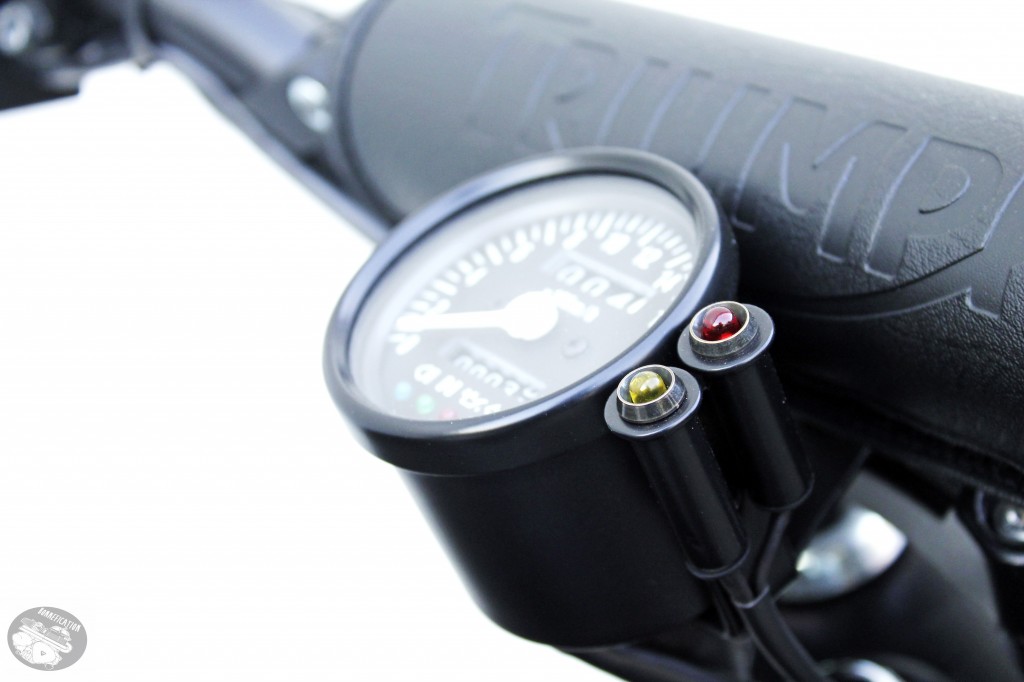 At the front, the oversized speedo has been replaced with one from the XS650 catalogue, which is an easy and visually pleasing modification. The handlebars are Ergal MX items that have been powder-coated to blend in. Bar end mirrors with brackets made by Roberto take care of safety and a Triumph aluminum brake reservoir finish of the bars a treat. 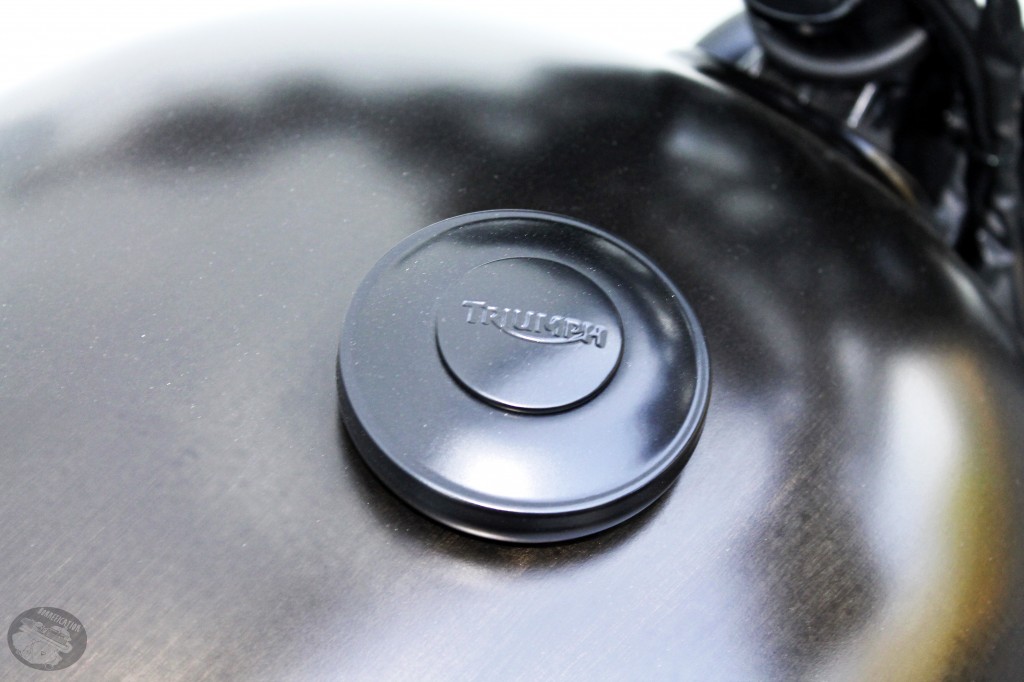 A lower profile front light with custom mounting brackets has replaced the stock items and again black bullet turn signals. With the removal of the stock light and mounts, the ignition has been relocated using the LSL bracket, and the rectifier has also been moved to the frame where the horn normally sits, with the horn moved down to the frame cross brace. 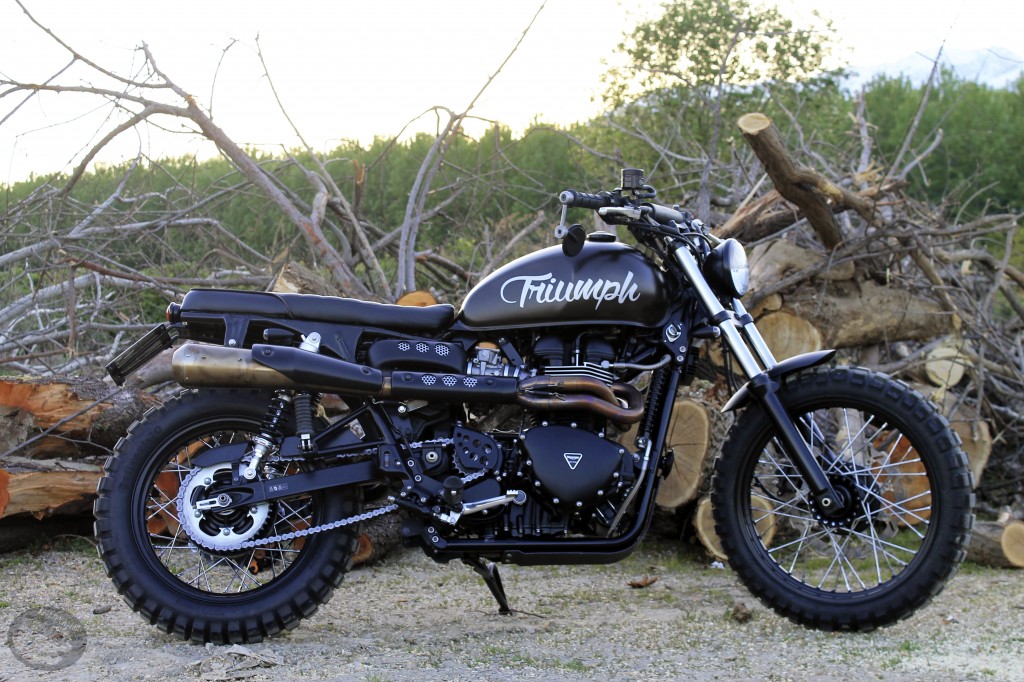 Dagger Cycles chose a metallic brown/gold finish for the fuel tank, which reflects beautifully under the Italian sun. This has then been adored with a hand-painted Triumph logo, and finished off in satin clear-coat. In contrast, the side covers and front mudguard as well as other details have all been painted satin black to match the engine side casings, allowing that custom tank to stand out. 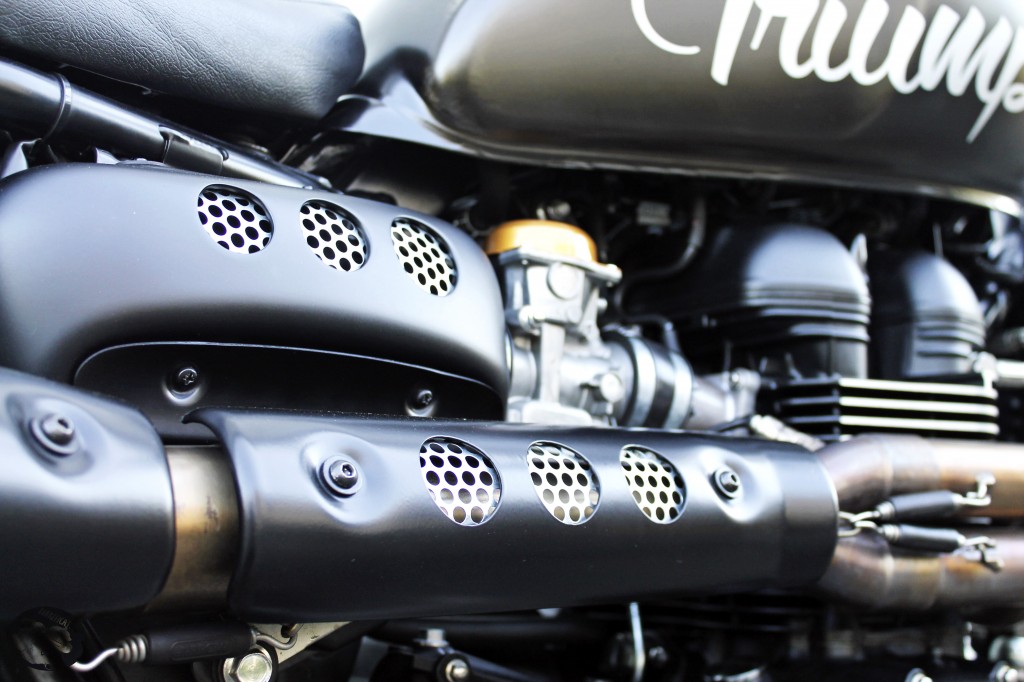 Roberto wanted to give the Arrow exhausts which were fitted to the Scrambler from new, a warn effect. He achieved this by basting the pipes in oil over a spit, strange technique, but it did the job it would appear. The heat shields didn’t escape the modification process, being powder coated black with the center shield being reinforced to allow Roberto to fit the same wire mesh vents he had fitted to the side covers. The overall effects give the Arrow the same brown/metallic and black appearance as the Tank, clever. 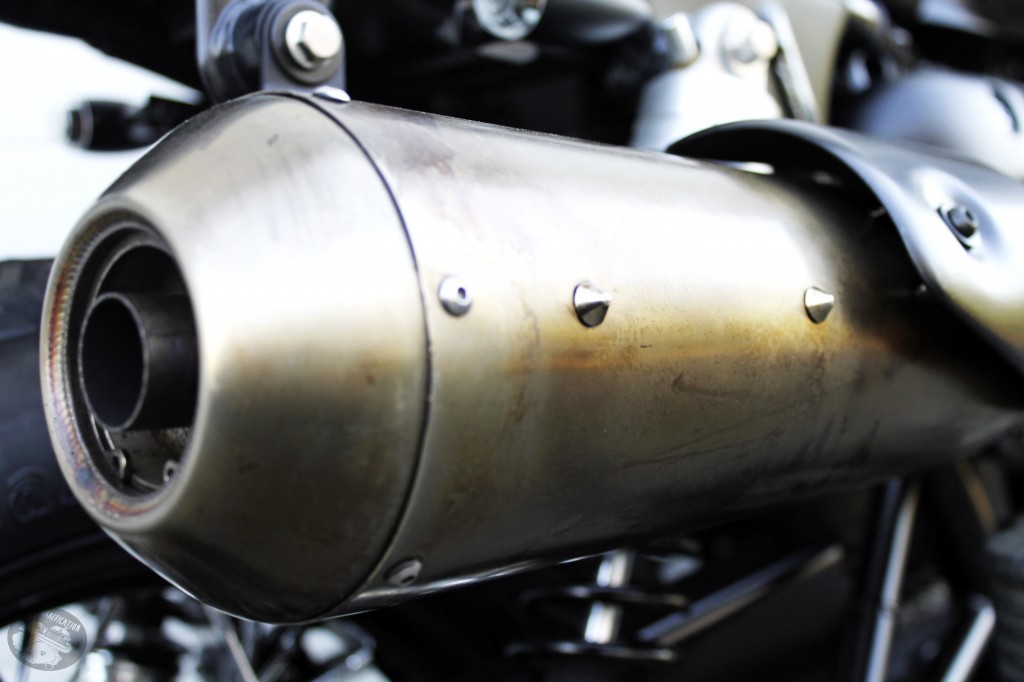 Suspension, of course has been upgraded with Gazi rear shock. Stock rims, hubs and spokes being power-coated black to stay in keeping with the overall look. The tires as you would expect have been replaced, with Dagger Cycles choosing the better looking and performing Continental TK80. The engine hasn’t missed out on the action, being fitted with a black MAS sprocket cover and Triumph bash guard.

‘After a lot of time spent in searching parts and work on the bike I can say that it was worth it, the result was proper!’

I think we can agree on that.