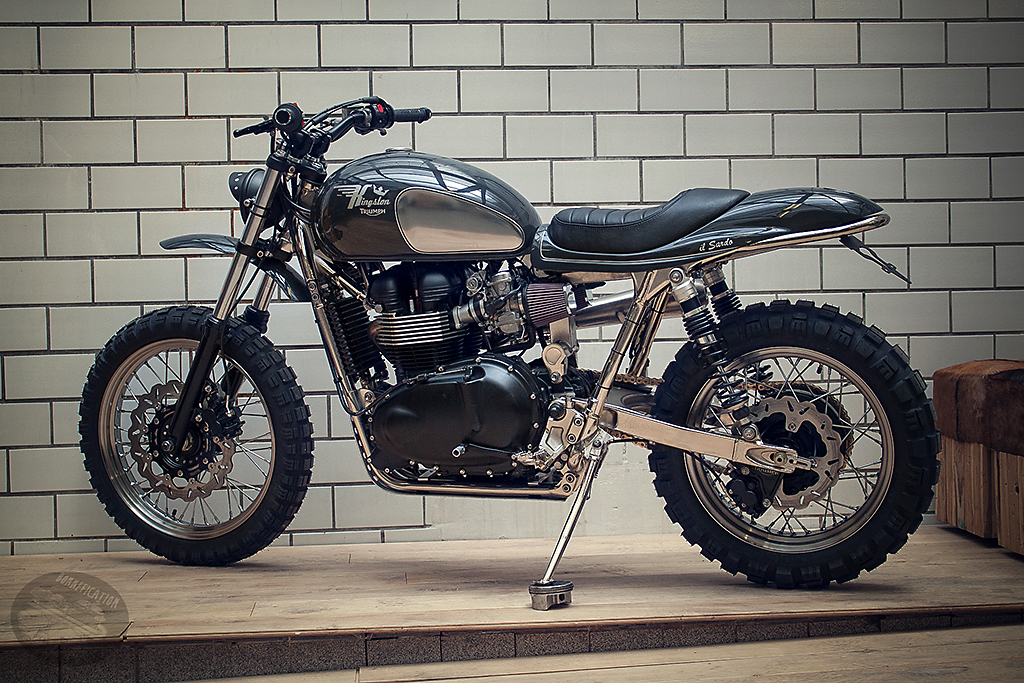 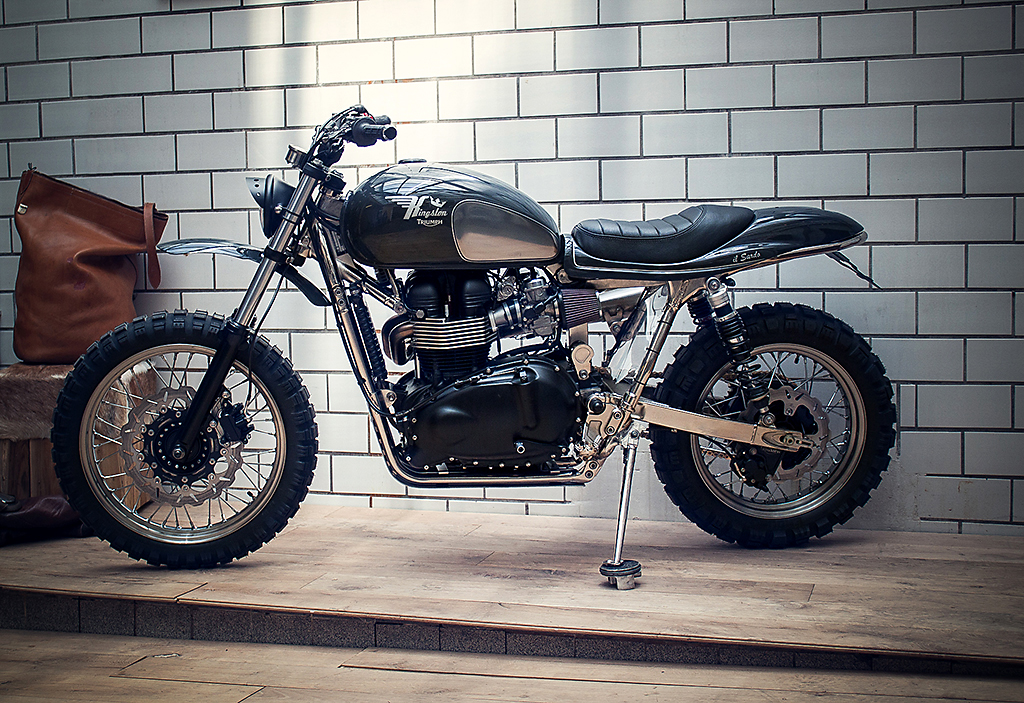 Weight saving on the Triumph Twin seems to be a preoccupation of many including myself. Strangely this obsession with weight loss isn’t the just domain of the modern Triumph, Ton-up rider, who want to get every last mph out of a relatively untuned 865cc twin. It’s also an ever growing preoccupation with those of us who want to make, what is essentially a homage to an off-road motorcycle of the sixties, more off-road viable. 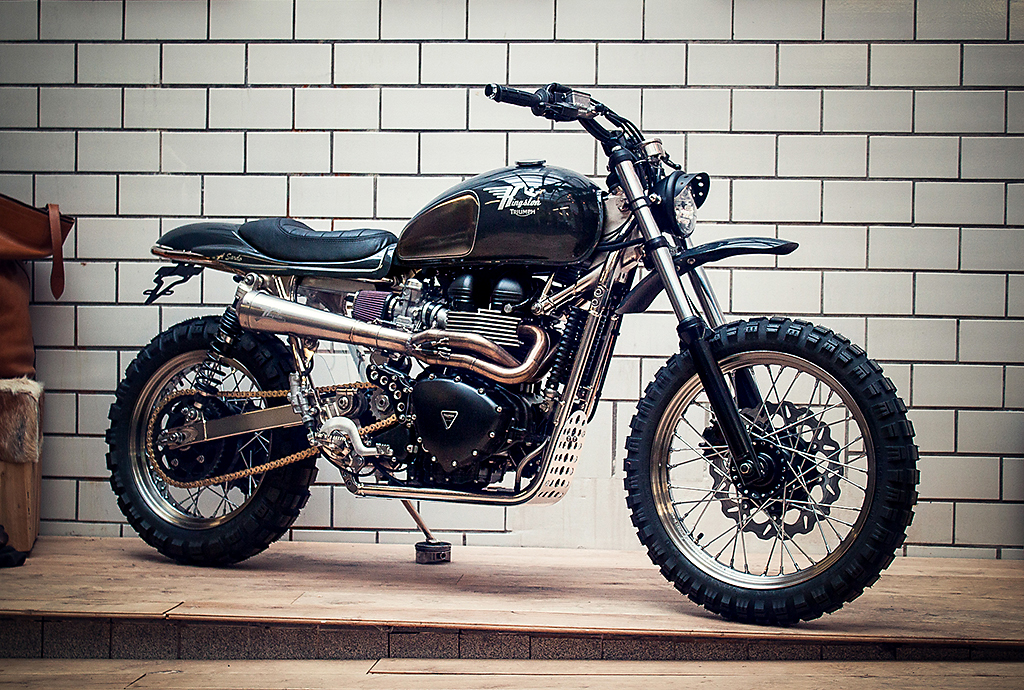 David Beckham may well of ridden a modified Triumph T100 on the dirt roads of Brazil. There are even a few who take the Triumph’s Scrambler touring, with even fewer riding them in events such as ScramAfrica. But the Scrambler, let alone other bikes from the Classic range are not ‘off-road motorcycle’. Even compared to fifty year old, twin shock dirt bikes, which, in reality, are the only bikes, a fully modified Triumph Twin, could ever get close to. The bike is simply to heavy in its current form. 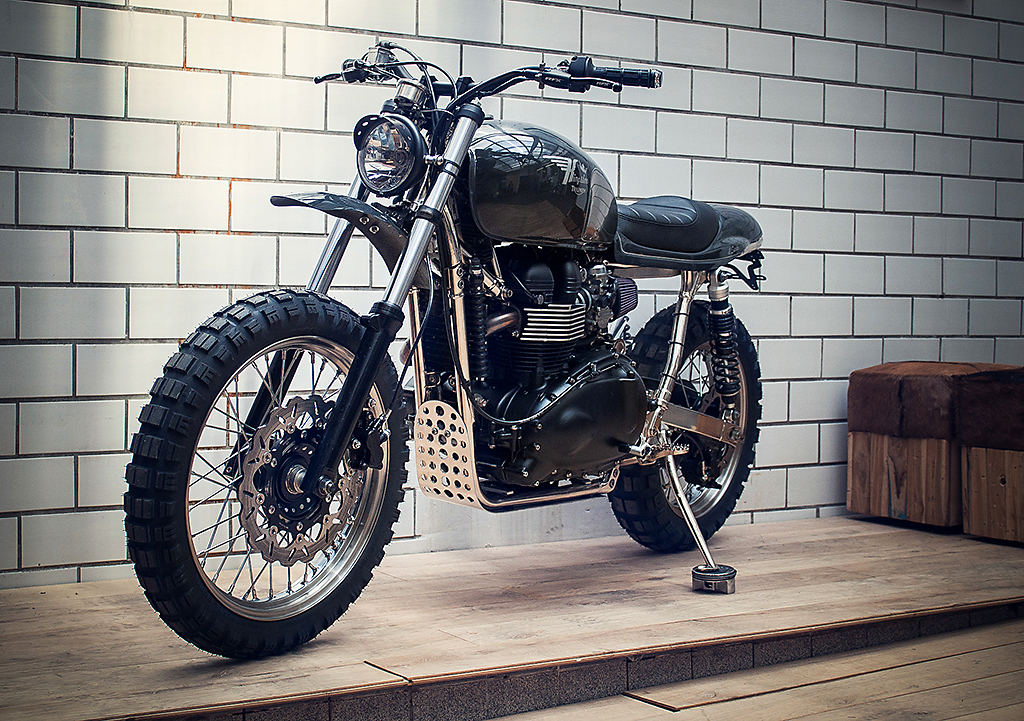 I have also been reliable informed, that the frame around the rear shock mounts have broken if the bike is pushed to hard off-road. But regardless of the madness behind our need to make the Scrambler a ‘Scrambler’. We have an overwhelming urge to make it a reality. With the end results, often being the bikes dreams are made of. 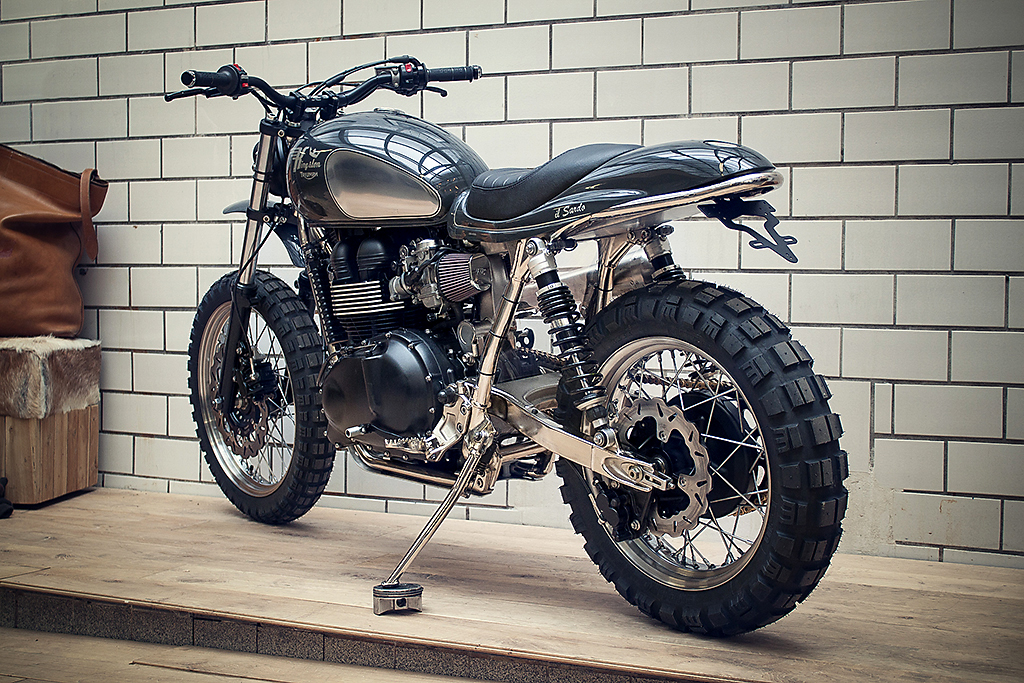 One such build has been undertaken by Dirk Oehler King of the Gelsenkirchen, Germany based Kingston Custom. The thirty-five year old former motocross champion was approached in October of last year by Uli Bree, the organiser of the Triumph festival Tridays, to build something special which would be shown and raced at the event, which is held every year in Neukirchen Austria.Wanting to go down memory-lane (or perhaps memory ‘fire-road’) to the days of McQueen and ISDT. Dirk started his build with a second hand Triumph Scrambler, which was completely dismantled before the frame, swing-arm and components were chemically dipped to remove all the paint, dirt and rust. Then the rear peg mounts, sidecover and centre-stand mounts were removed. 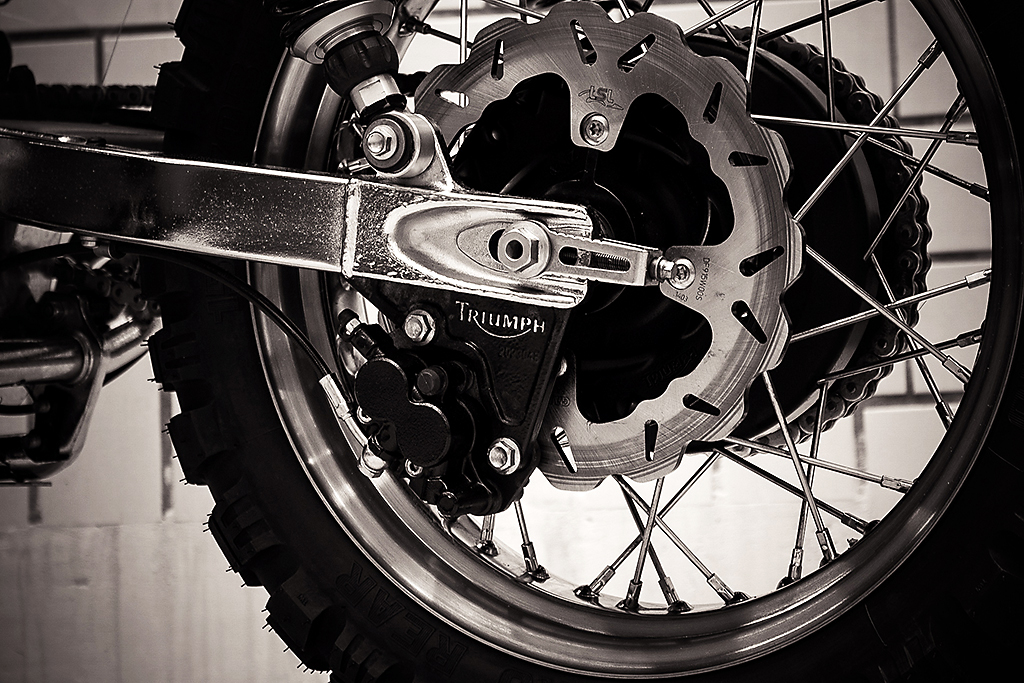 Next, a new loop was grafted on, with the standard sidestand being replaced with one from a Honda XLV, and relocated from the lower frame rails, to the main frame, just behind the left hand footpeg mounting bracket. Everything was then laboriously sanded and polished before finally being nickel plated. 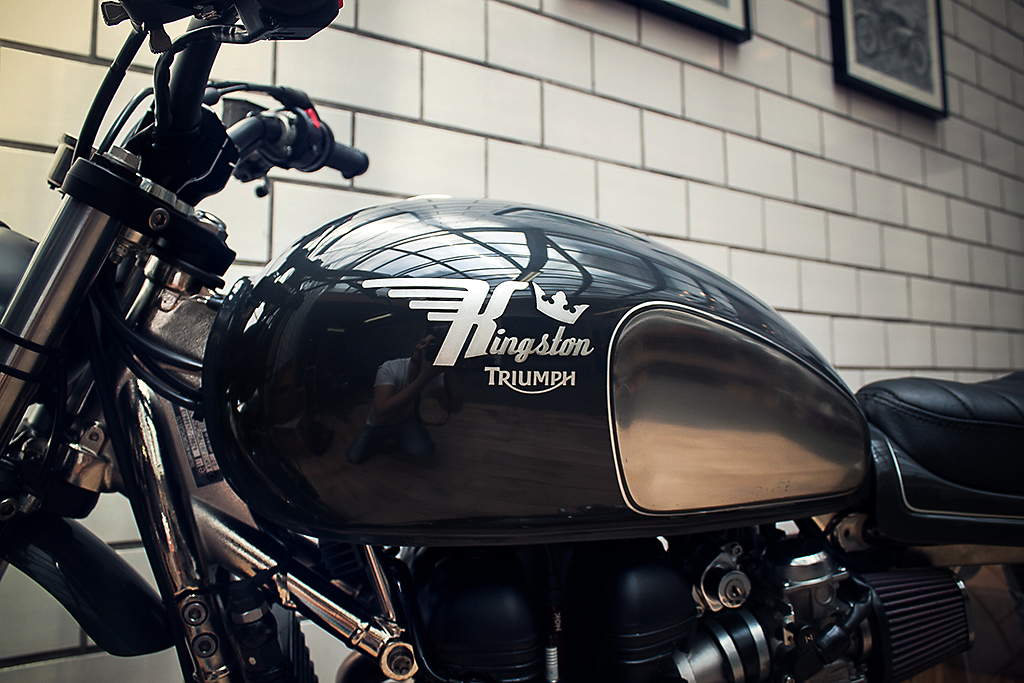 Relocating the sidestand is pretty clever, as it would give the bike more clearance off-road, with that in mind, I would have located the rear brake calliper to above the swingarm, but thats just Bonnefication’s opinion. Also Im hoping that the sidestand from the Honda XLV is lighter than the one from the Scrambler. 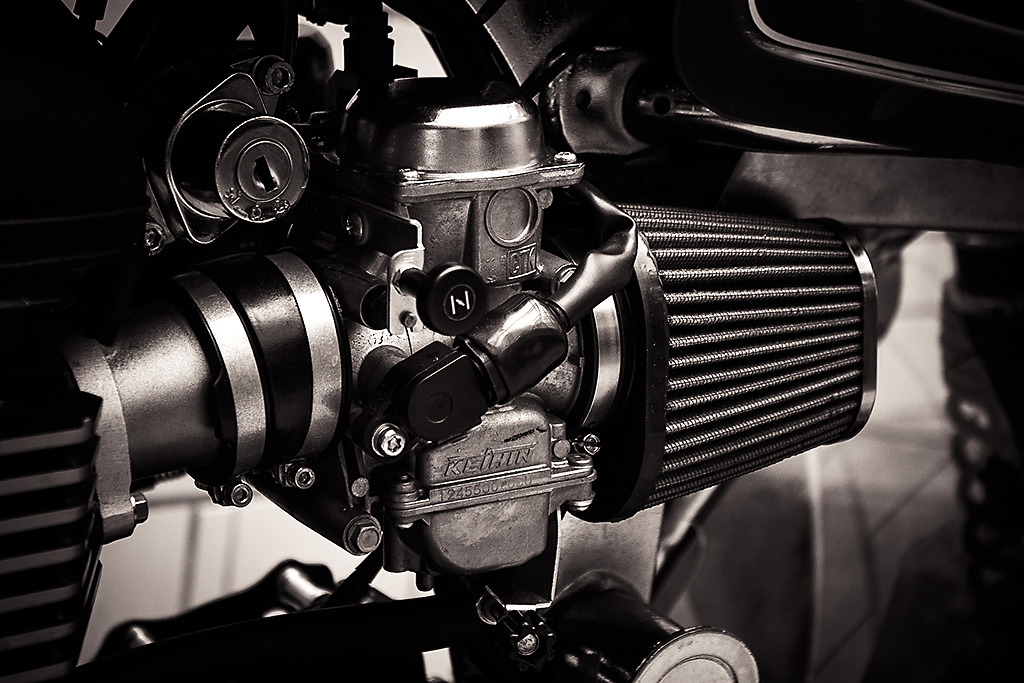 As well as the frame, the other key feature to this build, is the fibreglass seat by Kompo-Tech, who are an Italian fibreglass specialist who have been producing seats for the Triumph Twin for many years. Their products are of good quality, and are well worth taking a look at via resellers. On this occasion the seat has been modified to fit due to the added frame loop. The seat would normally secure to the frame using the standard rear seat mountings. This seat is also a straight swop for the standard item. 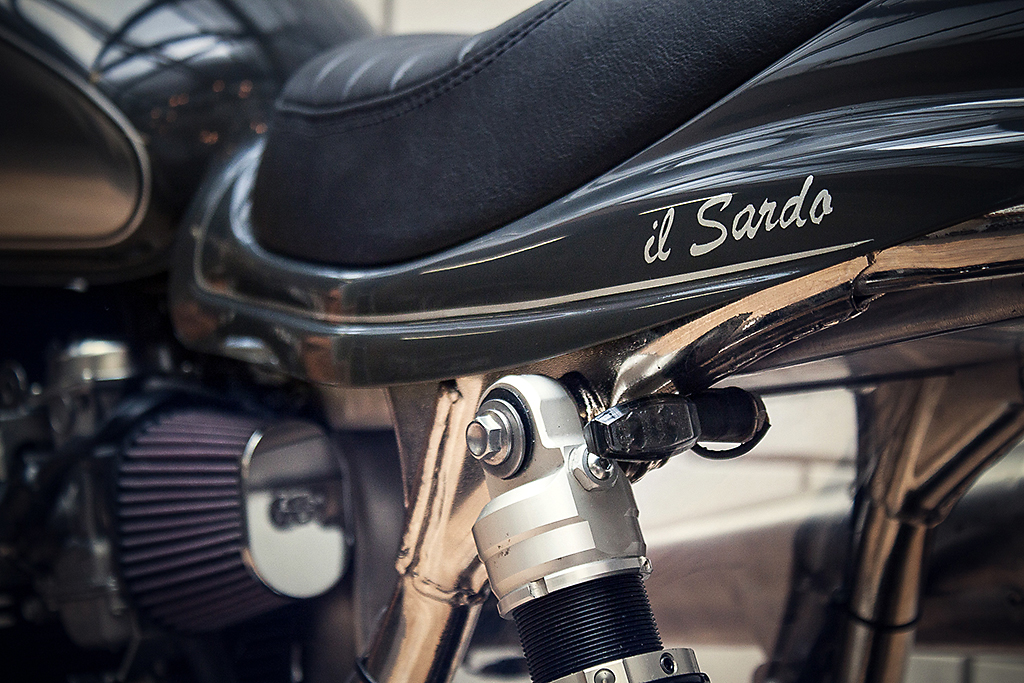 The combination of the Nickel plated frame and Kompo-Tech seat is stunning, and very reminiscent of McQueen 750cc Triumph Metisse TT Special, which Steve is seen riding in the November 1966 edition of Sports Illustrated magazine, a bike which succeeded his Triumph Bonneville, and proceeded his Husqvarna. The Husqvarna being made famous when the two appeared in the Bruce Brown Documentary ‘On Any Sunday‘. Shame the movies, which was made in 1970-1971, and not a few years earlier, when McQueen was still on the Triumph. 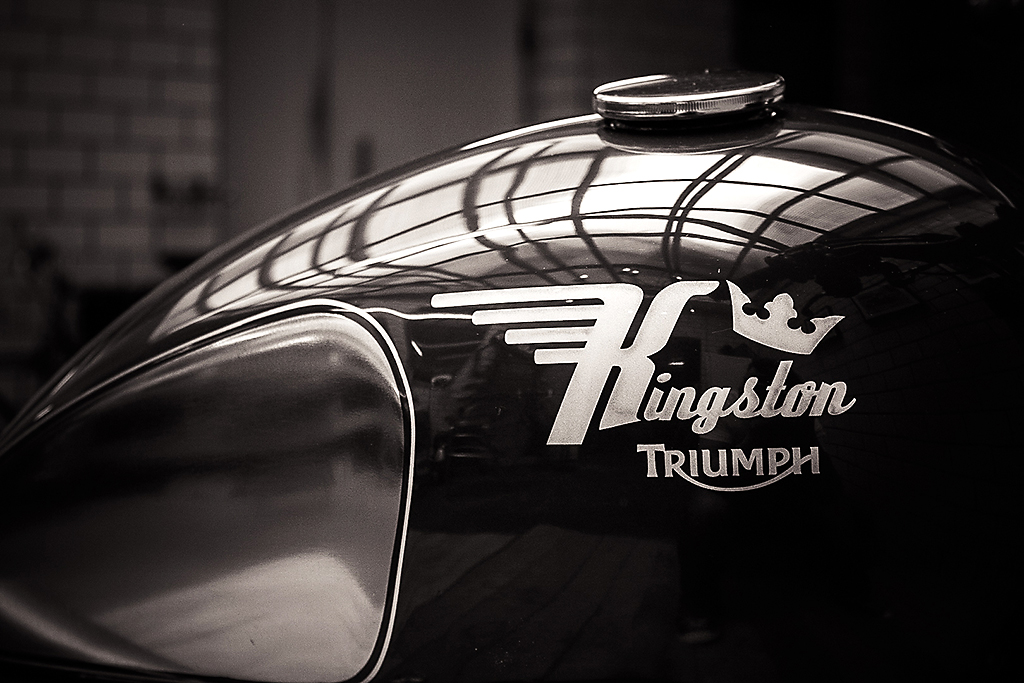 Not that its clear (no pun intended) from these photographs, but there is in fact a rear mudguard protecting the engine and intake, which sports K&N air-filters, from mud chucked up by the knobbly Mitas E 10 tire (150/70-17 ) Made from clear Polycarbonate, and secured to the frame where the stock airbox would be located. 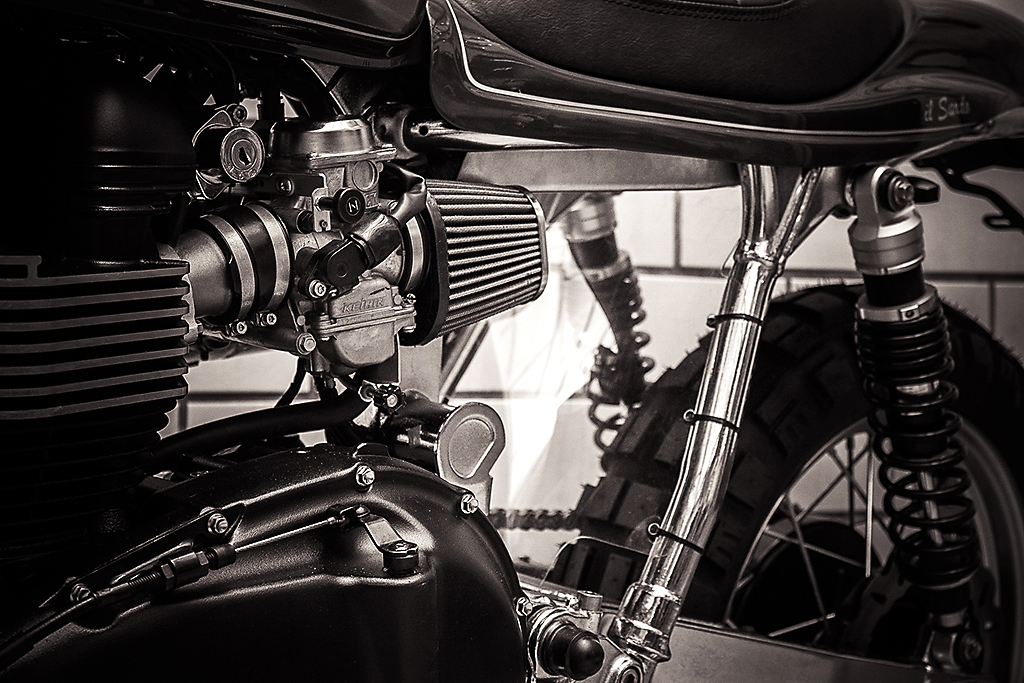 The front mudguard covering the Mitas E 10 (110/80-19) has been replaced with an LSL item, which as then been relocated using a custom drilled mounting bracket. Also helping to keep that nickel frame free from damage is a custom made sump guard, which too has been drilled. The wheels, surprisingly are the stock items, which have in parts been ground back to the nickel. Perhaps the nickel is why they have been retained, rather than being replaced for lighter alloy wheels. 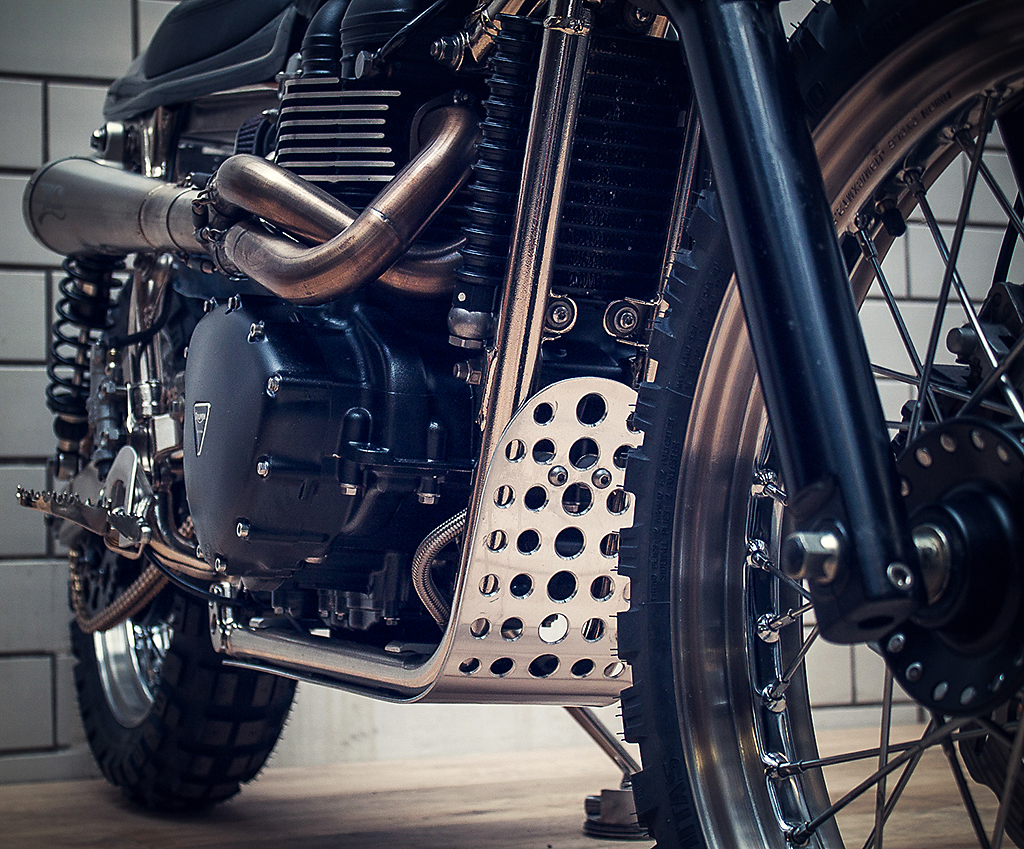 Staying at the front, the stock, oversized speedo has been replaced with a Daytona Velona, which has been fitted to the Scrambler via the Motogadget plug-and-play M-Tri . A Triumph specific adapter that is essential when changing the speedo on any post 2011 Triumph’s with CAN Bus. The Handlebars are from LSL with Motogadget m-Blaze Disc bar end turn signals. The headlight is a Bates style unit with a drilled visor.

Braking has been upgraded both front and rear using Nissin RFX master cylinders, LSL brake lines and RFX levers. Both front and rear brake calliper remain the stock items. The suspension has also been upgraded with 370 mm YSS shocks. The Scrambler has a unique voice amongst it’s Classic Twin brethren, due to it’s 270º firing order, a voice which has been enhanced by a mix of the original Arrow headers and Kingston Customs silences.

With all the chopping, drilling and replacing of parts, this particular Scrambler has indeed lost weight. 41Kg to be exact. Thats 90lbs…. Which is about half my body weight (I wish). Nice work Kingston Custom!

The name Il Sardo was born when Uli Bree asked me if I wanted to take part in a new movie clip for the singer Jimmy Cornett in Sardinia / Italy. Yes it is! That was perfect! For the bike there could be no better place and name! Il Sardo (The Sarde, a proud and character-strong man, down to earth and honest), properties that should give the motorcycle.

Previous
David Beckham on a Triumph and Into the Unknown