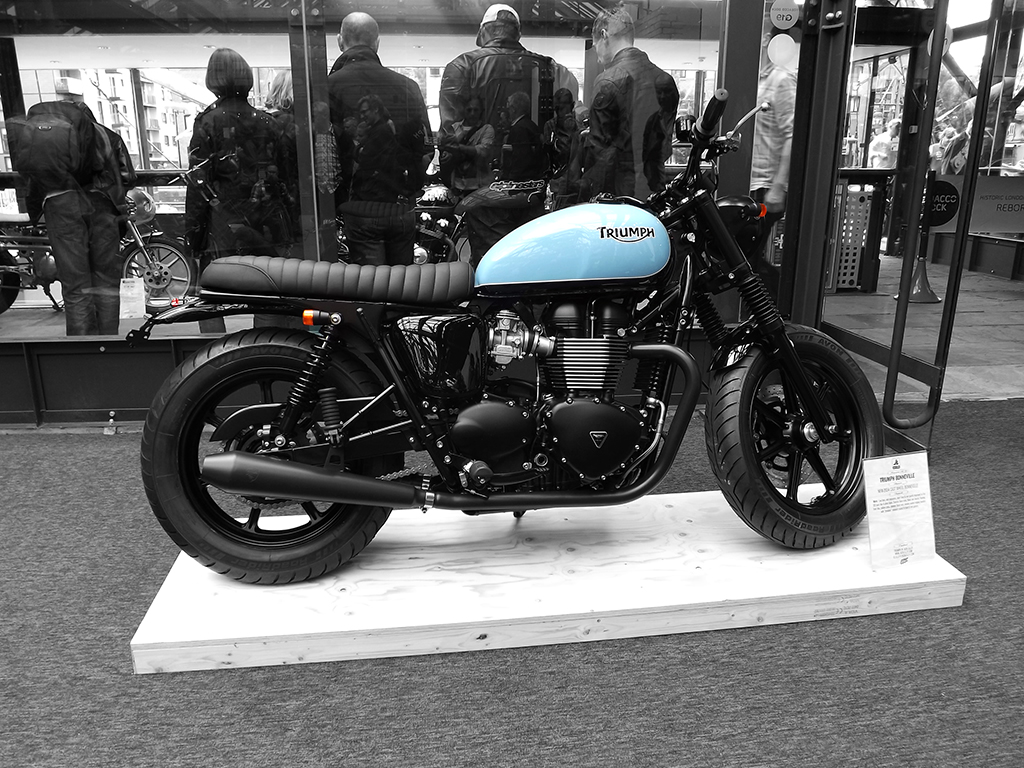 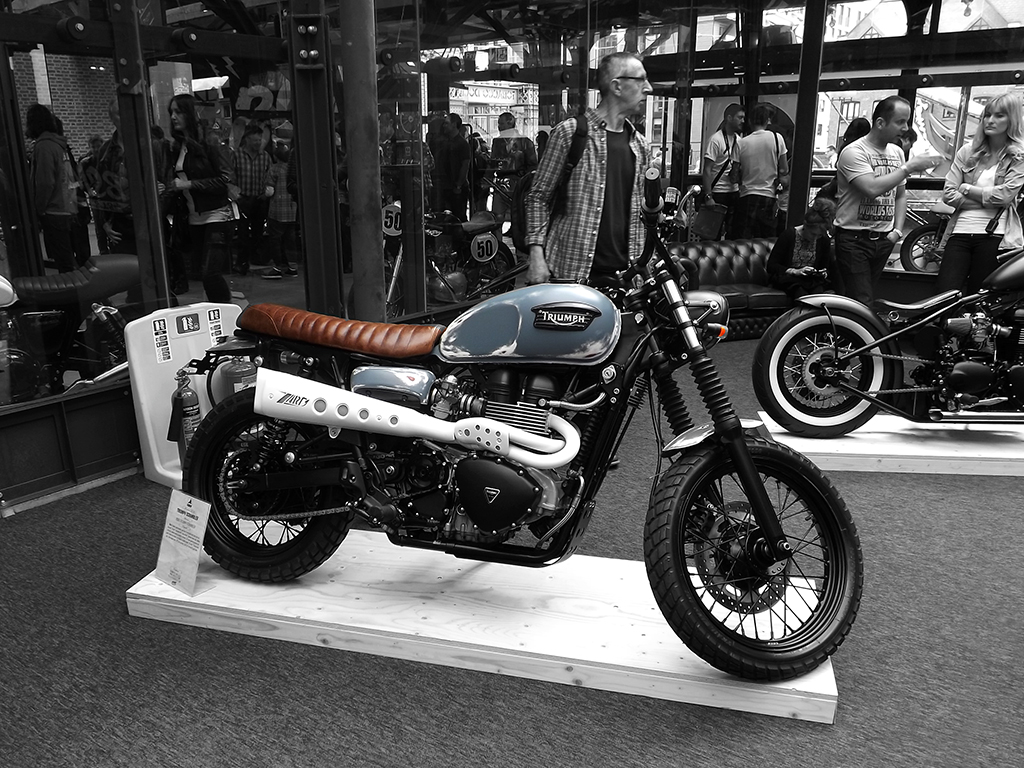 There where plenty of Triumph Twins to see at the BSMCIII event in May. Two particular bikes that caught my eye were the new builds from the Triumph dealer Jack Lilley, who is no stranger to the modified Triumph twin, regularly modifying bike to sale via their Ashford and Romford dealerships. 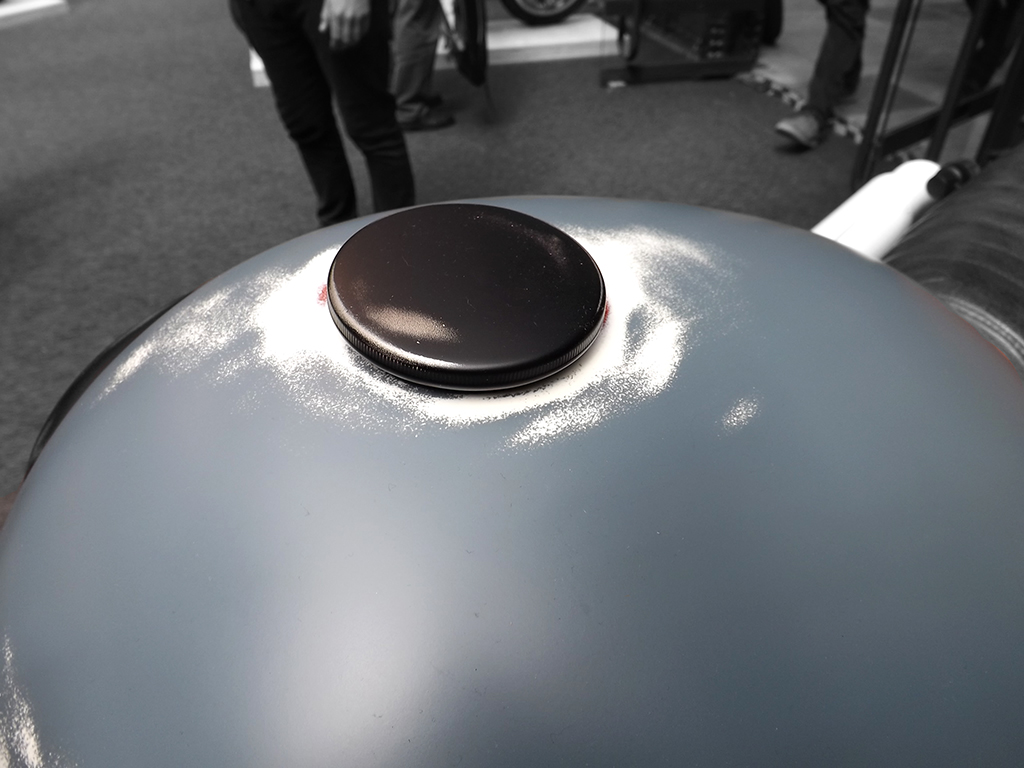 The David Beckham, Into the Unknown style Scrambler is an early 06 model with 12,000 miles on the clock, which was taken in part exchange. The bike wasn’t in the best of shape having been dropped at some stage on the right hand side. As jack Lilley needed a bike for the BSMC show it was decided this bike would make a perfect base for a project, first off, was a much-needed service. 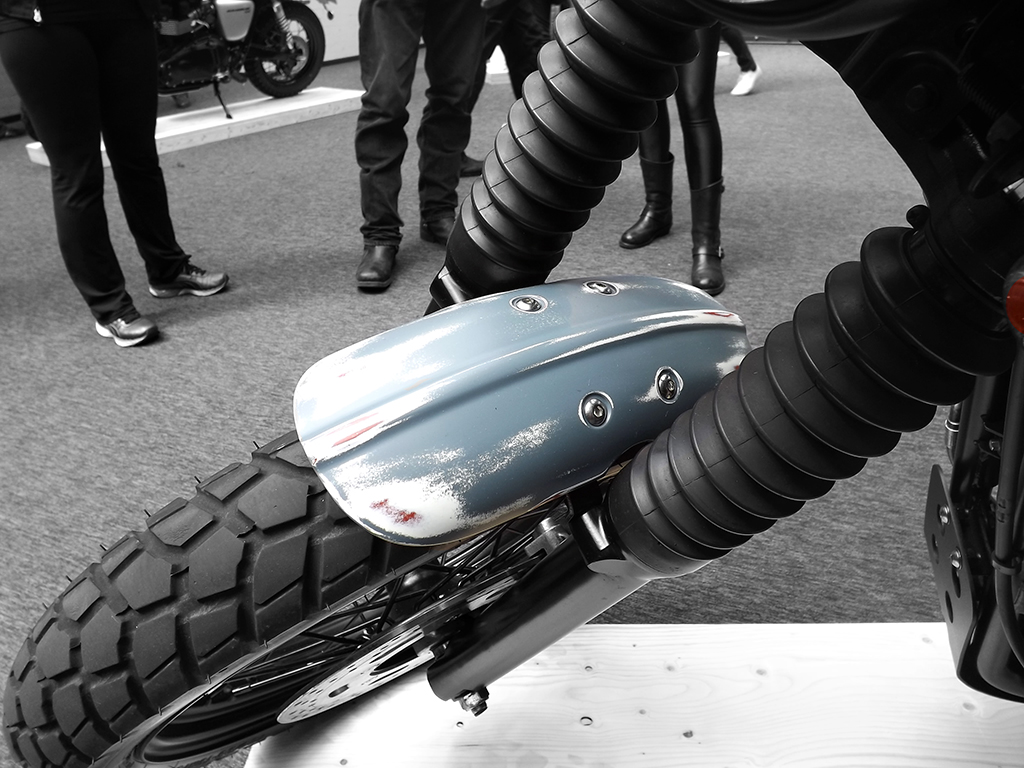 Then the guys in the Jack Lilley workshop had the wheels powder coated black, along with the headlight rim, gear and rear brake levers. The bike also received a new top-yoke and clocks from a Bonneville. While in the Triumph parts bin, the Scrambler had its old engine casing and front brake reservoir replaced, with the stock bars being changed for those from a Street Triple, and finished off with a nice new black Triumph Bash Plate. 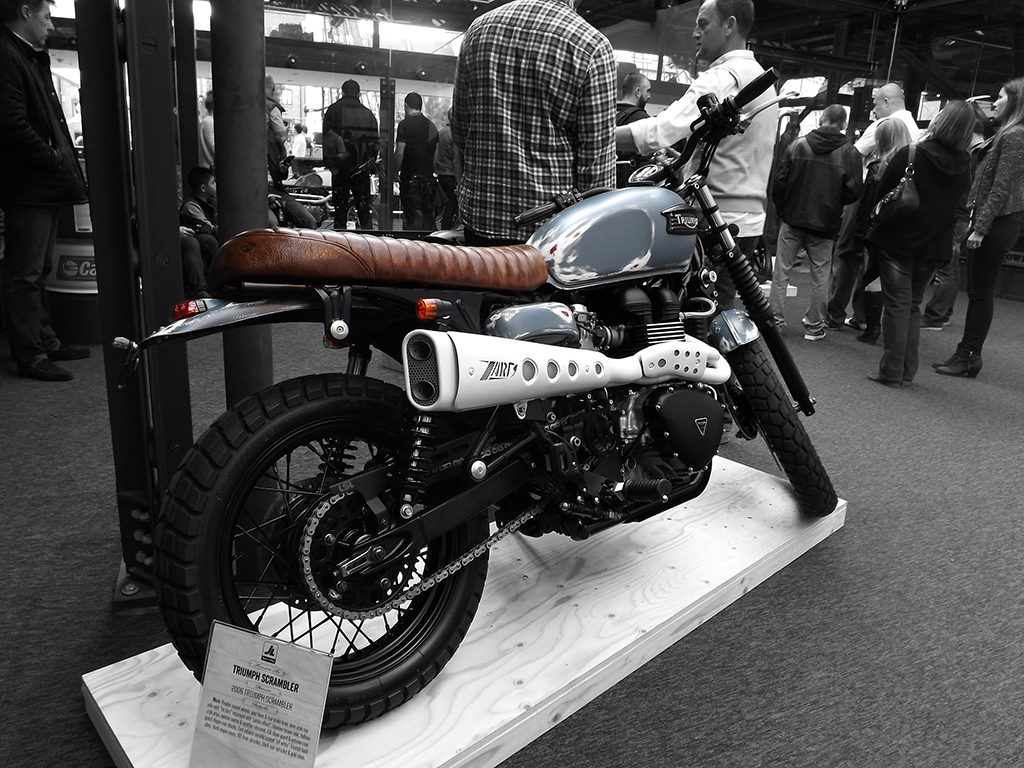 That not the original paint job, though considering the bikes condition when it arrived at the Jack Lilley dealership, it very well could be. The bike received a full respray, which has been ‘shabby she eked’ (as my girlfriend called it) 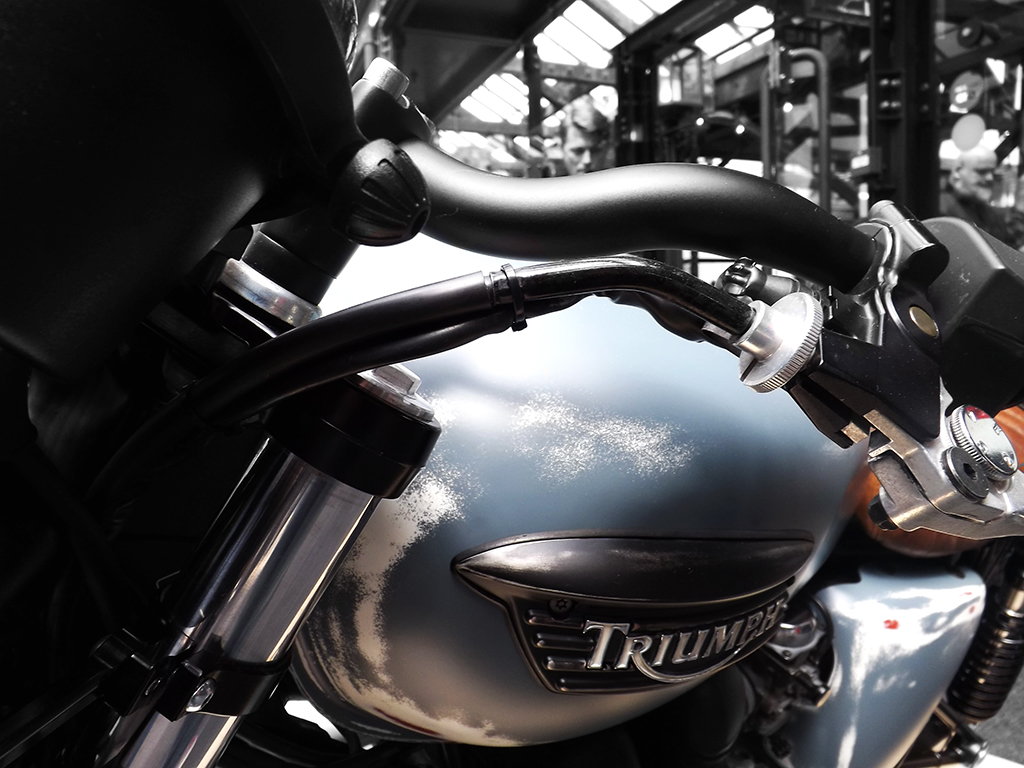 At the back, is the super cool LSL Extreme mudguard, which I think is one of the best looking off-the-shelf mudguards on the market. The front is the original item, which has just been cut down. The dark brown leather seat is from the U.S Company, British Customs, who stock a vast range of parts for the Triumph twin. The Zard exhaust system has been ceramic coated, off-white with end and grills ceramic coated in a titanium colour. 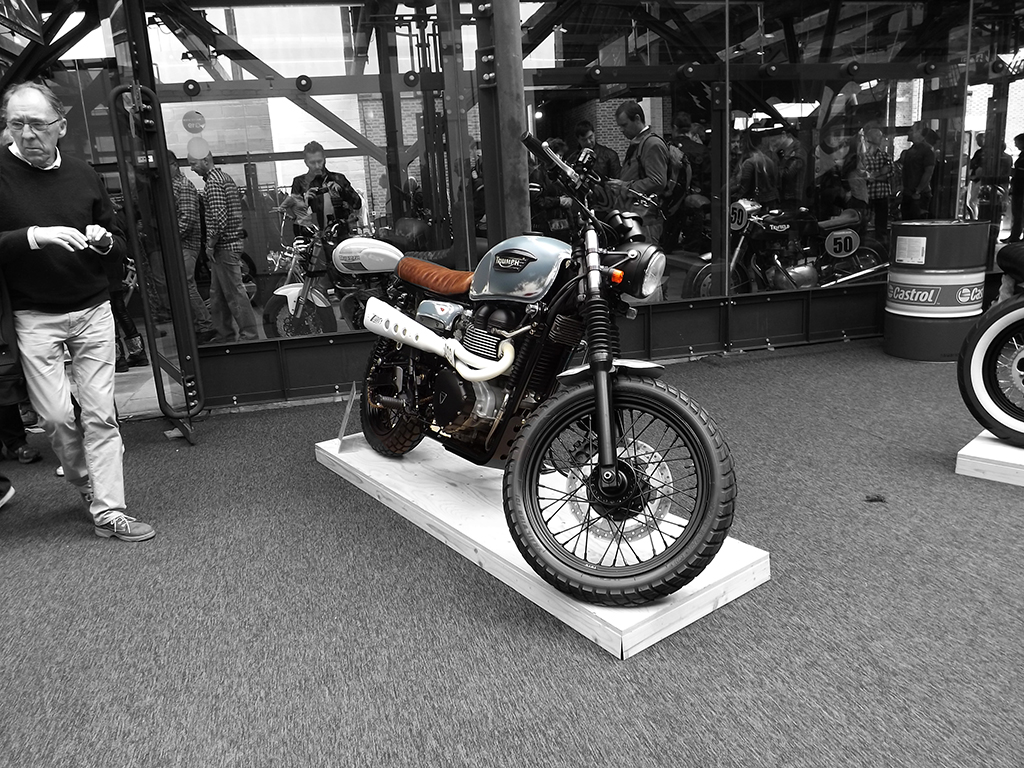 Other modification on this build includes, LSL chain guard, sprocket cover and headlight ears. As well as an ignition and rectifier relocation kits. With the dreadful stock indicators being replaced with smaller items. To improve the ride, the Scrambler has been upgraded with Hagon Nitro rear shocks. Final drive has been shown a little love with a Gold chain, 19T front sprocket and black anodised rear sprocket. 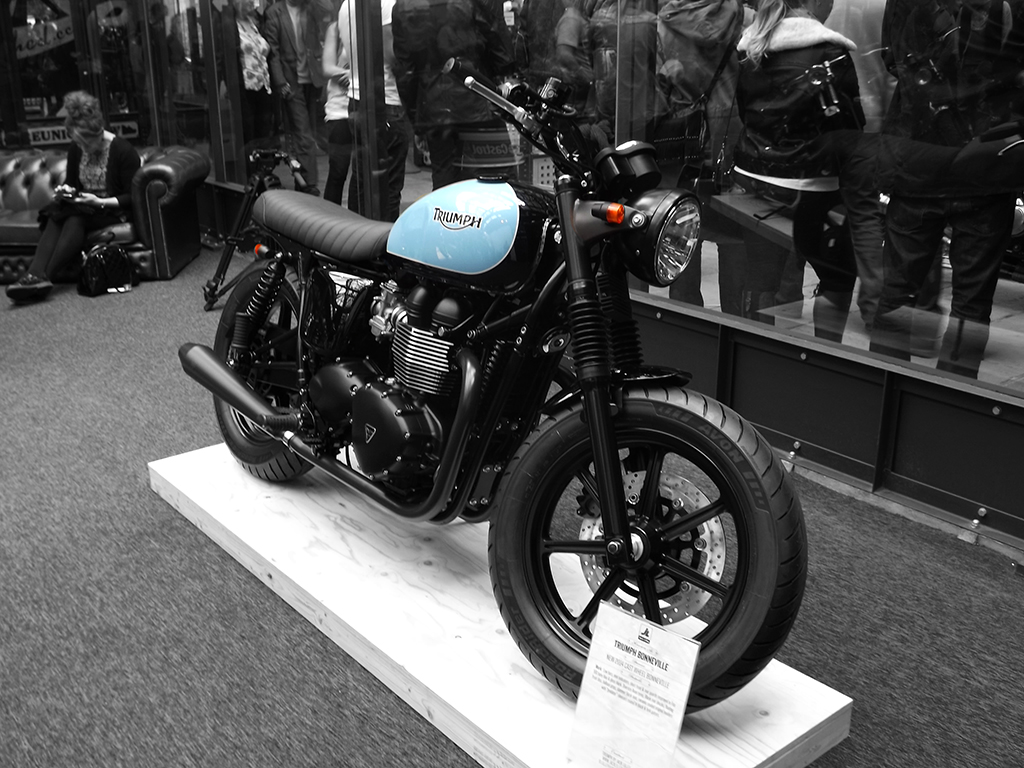 The Blue Bonnie, unlike the Scrambler, is a new 2014 cast wheel model, which again has had its wheels gear/brake and headlight bowl and rim powder coated. With the tank being painted, Black and Fiat 500 Volare blue. This bike also uses the LSL rear mudguard, with the front being shortened and brackets modified to take the oversized Avon Roadrider Tyres (140/80/17 rear & 120/90/17 front) 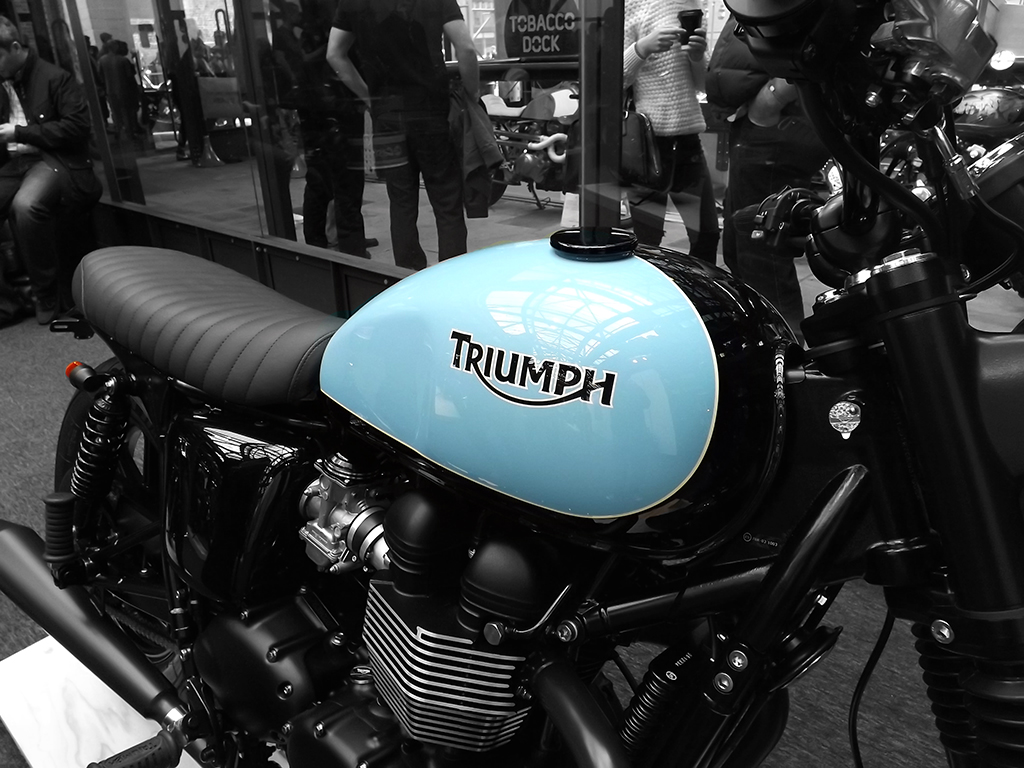 The exhaust uses the original headers with end cans from British Customs, both of which have received the ceramic coating treatment. The seat is the British Customs ‘Slammer’. 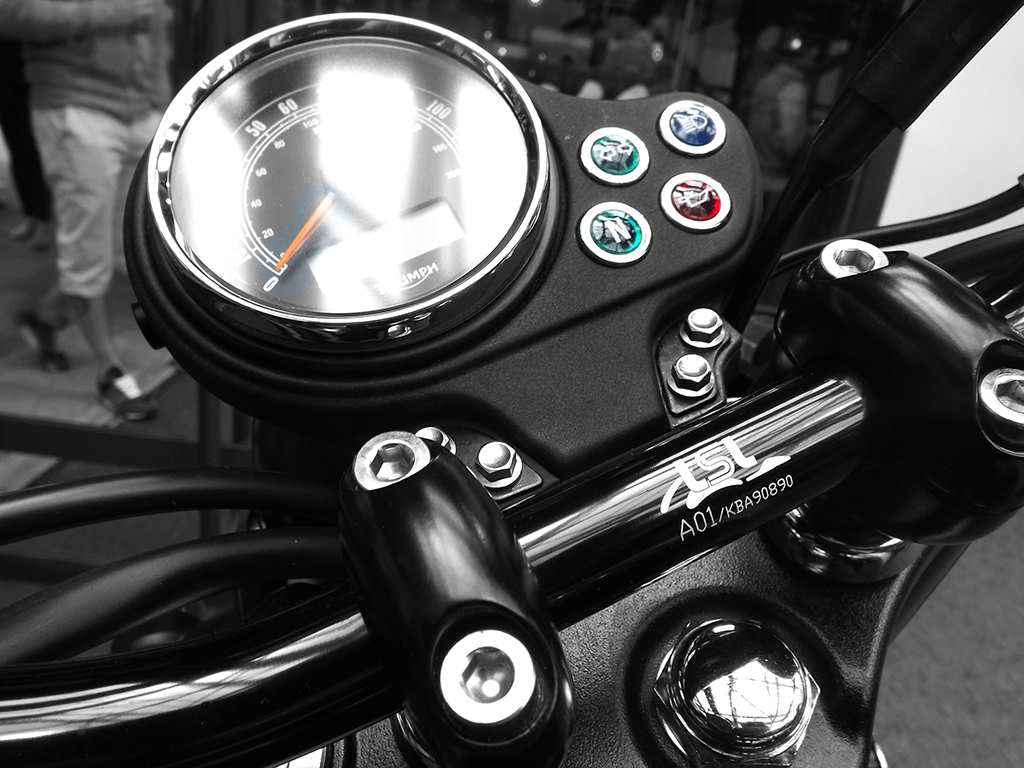 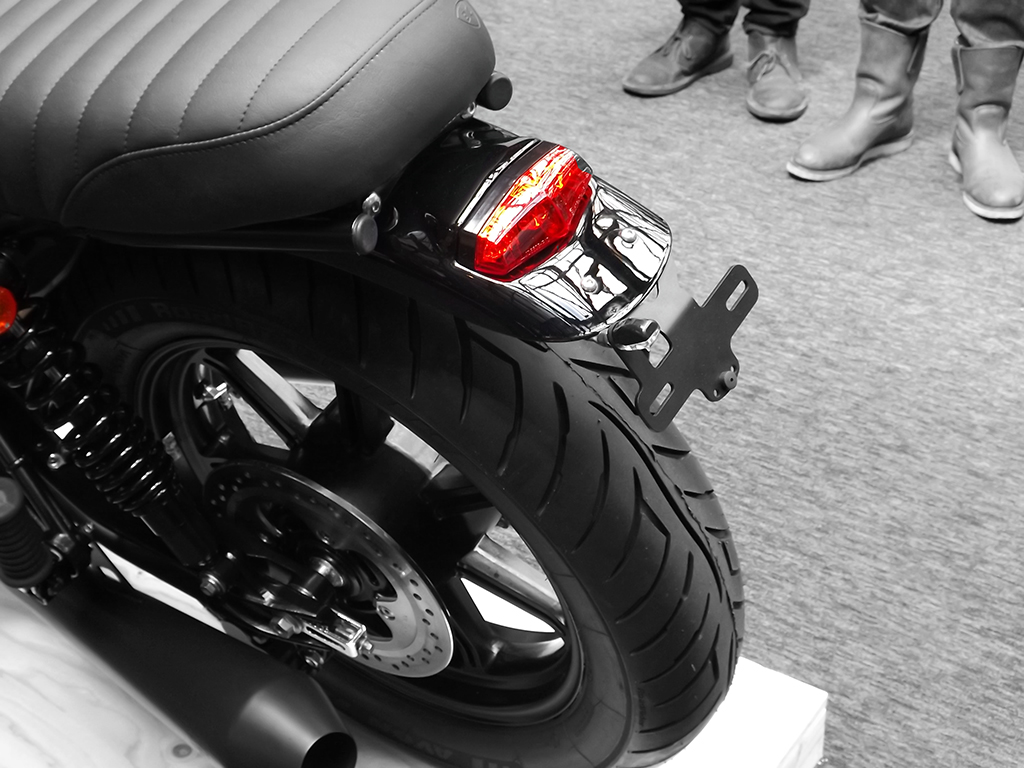 These two build show just what can be done to the Triumph, without going to crazy and chopping bits off, or fabricating bespoke parts, which often prices a bike out of many a mortal man or woman’s price range. These machines have been fitted with a carefully selected range of off-the-shelf parts and accessories from reputable companies such as LSL and British Customs. Which combined with custom paint, have turned two standard Triumph Twin into something special.  Also using off-the-shelf parts has proven, that doing so, doesn’t make the finished bike any less special than it’s bespoke counterpart.