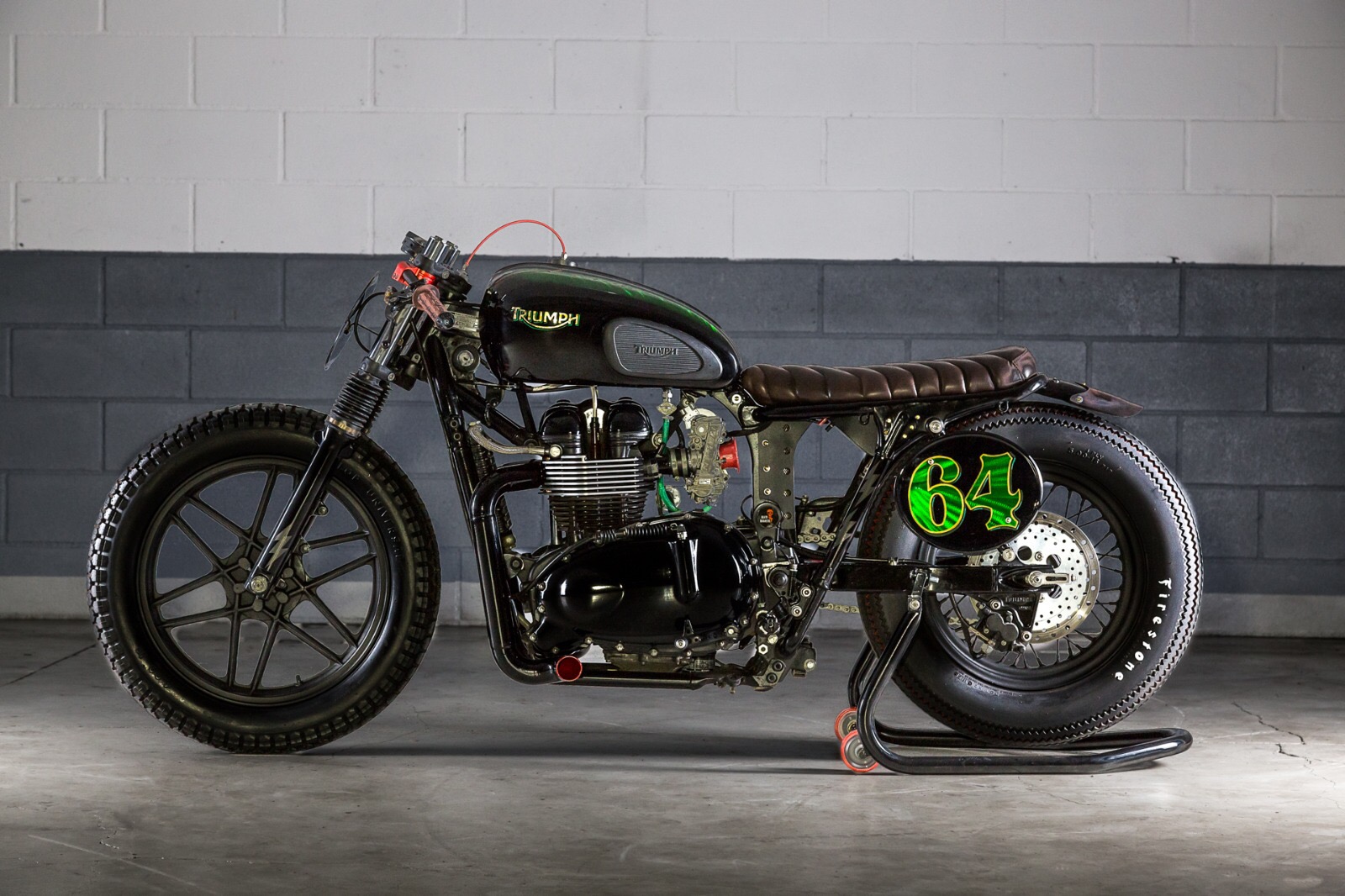 2018 will once again prove to be another busy year in the Bonnefication household; I turn fifty (party!!), Bonnefication will be ten (party!) and In April I will be judging the ‘Best Modified Triumph’ at the Kickback Custom Motorcycle Show on the 7th and 8th April (PARTY!). Then it will be onto The Dispatch Rally held here on the Hampshire Dorset border, the unmissable Bike Shed show at London’s Tobacco Docks, the Malle Mile in the Summer and onto the EICMA Motorcycle Show in Milan in November… so see you out there!

In-between, I will be writing Bonnefication, honing my Practical Shooting skills, hiking the Purbecks (lots of pubs visits involved) and once again modifying my own 2005 carb model Triumph Scrambler, a Classic Twin that I have owned for ten years (stay tuned for that one).

In those ten years, the Scrambler has gone from an everyday commuter to modified Scrambler, on to Custom Tracker and finally its current guise as a sixties Desert Sled, a style inspired by Bud Ekins and Steve McQueen.

My own Scrambler is not the only Triumph Twin to undergo numerous changes in its customising journey. It is not uncommon for a bike to grow and develop over time, one such custom is the Death Magnetic, a custom 2005 Bonneville T100 built by Iron Pirate Garage, a custom Twin which Bonnefication featured back in June of 2015.

I’m not going to focus on what had been done, instead, I will focus on what changed, so have a read of that article and I will see you back shortly…..

…welcome back, Death Magnetic was a great looking custom Triumph Twin, I think you will agree, but its owner wanted an update, and this time he wanted a vintage looking, drag racing ‘Quarter Miler’ 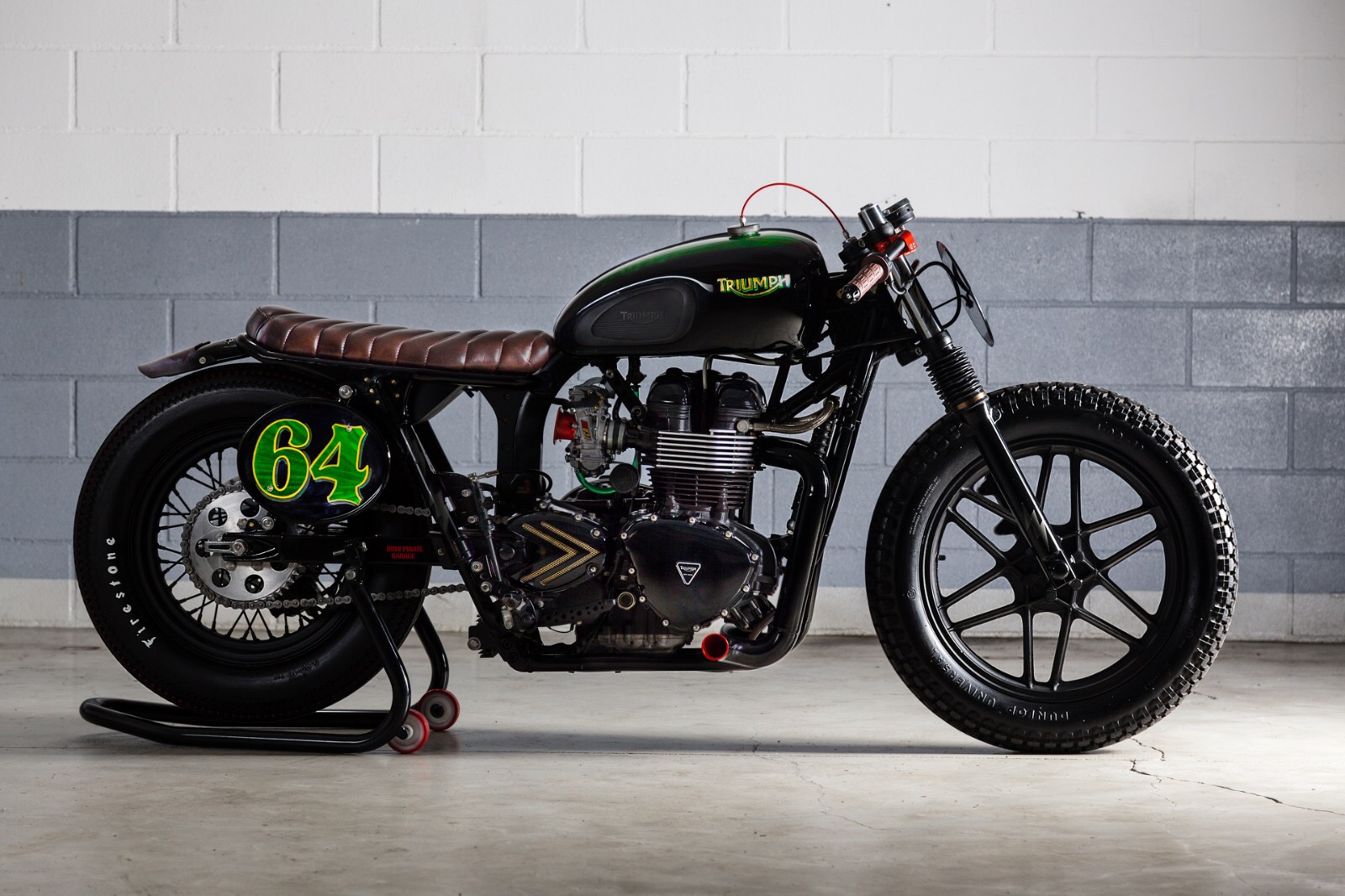 The Bonneville was rolled into the Iron Pirate workshop where the lights, turn signals, mirrors and anything else one might need for road riding was removed. The old bobbed rear mudguard was replaced by new item crafted from aluminium and finished with a leather mudflap. 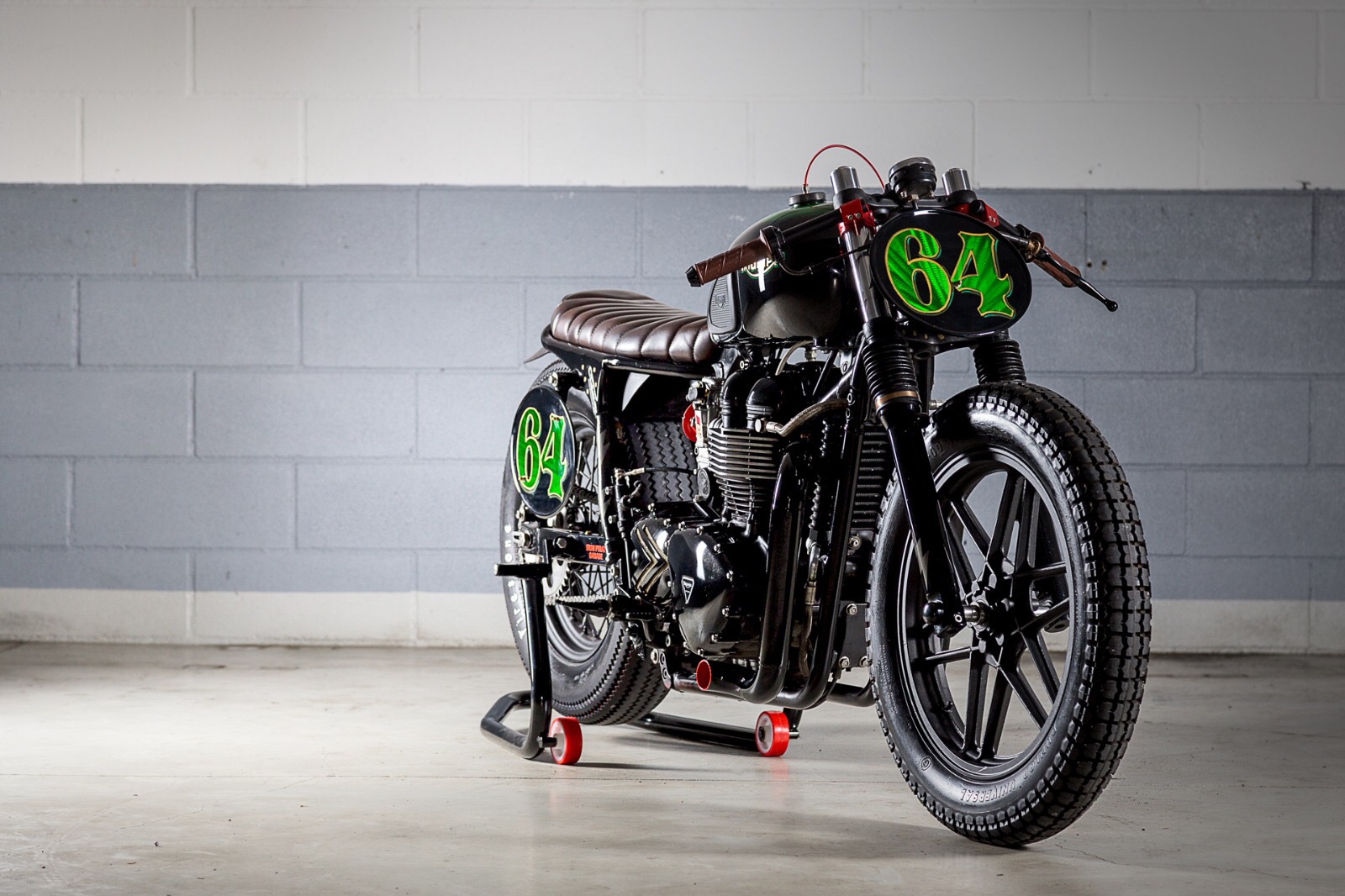 The rear shocks were replaced for shorter units, with the forks being dropped through the yokes, lowering this Triumph T100 on to a spoked 16 inch Harley Sportster wheel at the rear, with the front 18-inch cast wheel coming from a Honda. 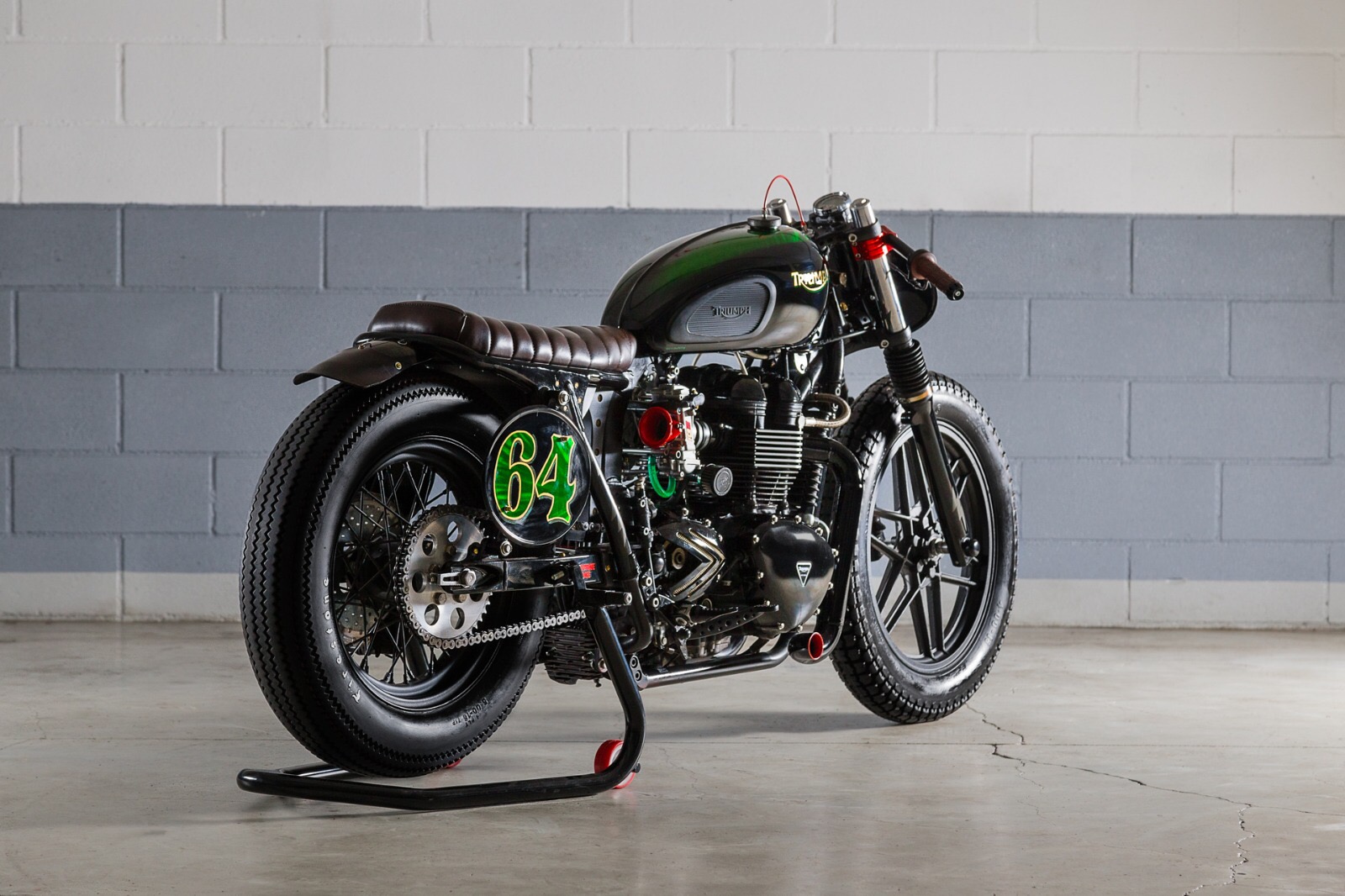 Both replacement wheels were then fitted with vintage Firestones, with the rear receiving a fat 16”/5.00 and the front an 18”/4.00. 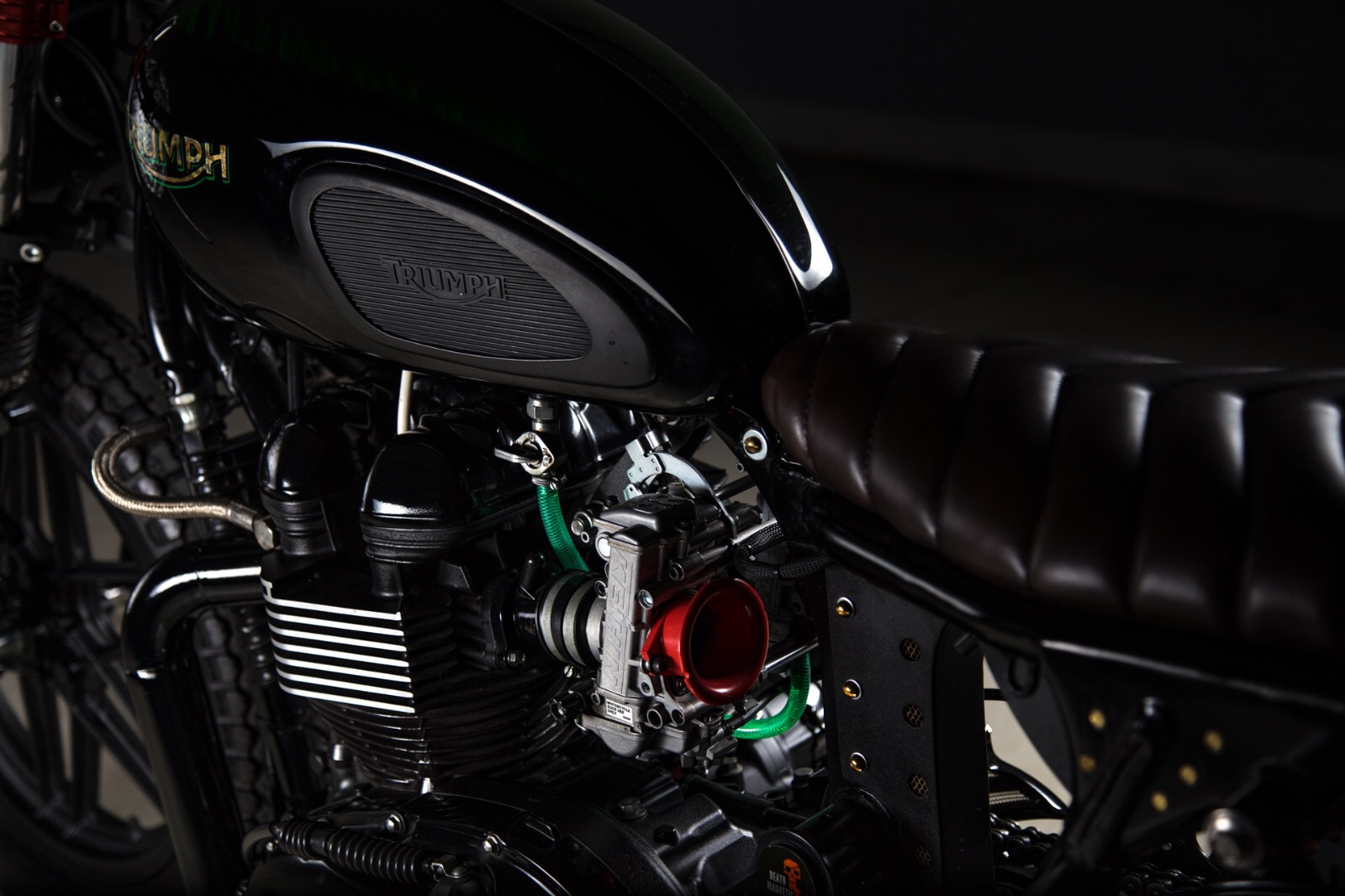 You might notice that the Honda front wheel isn’t fitted with a brake rotor, front brakes not being a great idea on drag bikes.Proudly displaying 64 graphics and painted to match are a set of custom aluminium number boards. Behind the front board now sits a set of clip-on bars sporting minimal controls, adding to this T100’s new racing vibe. 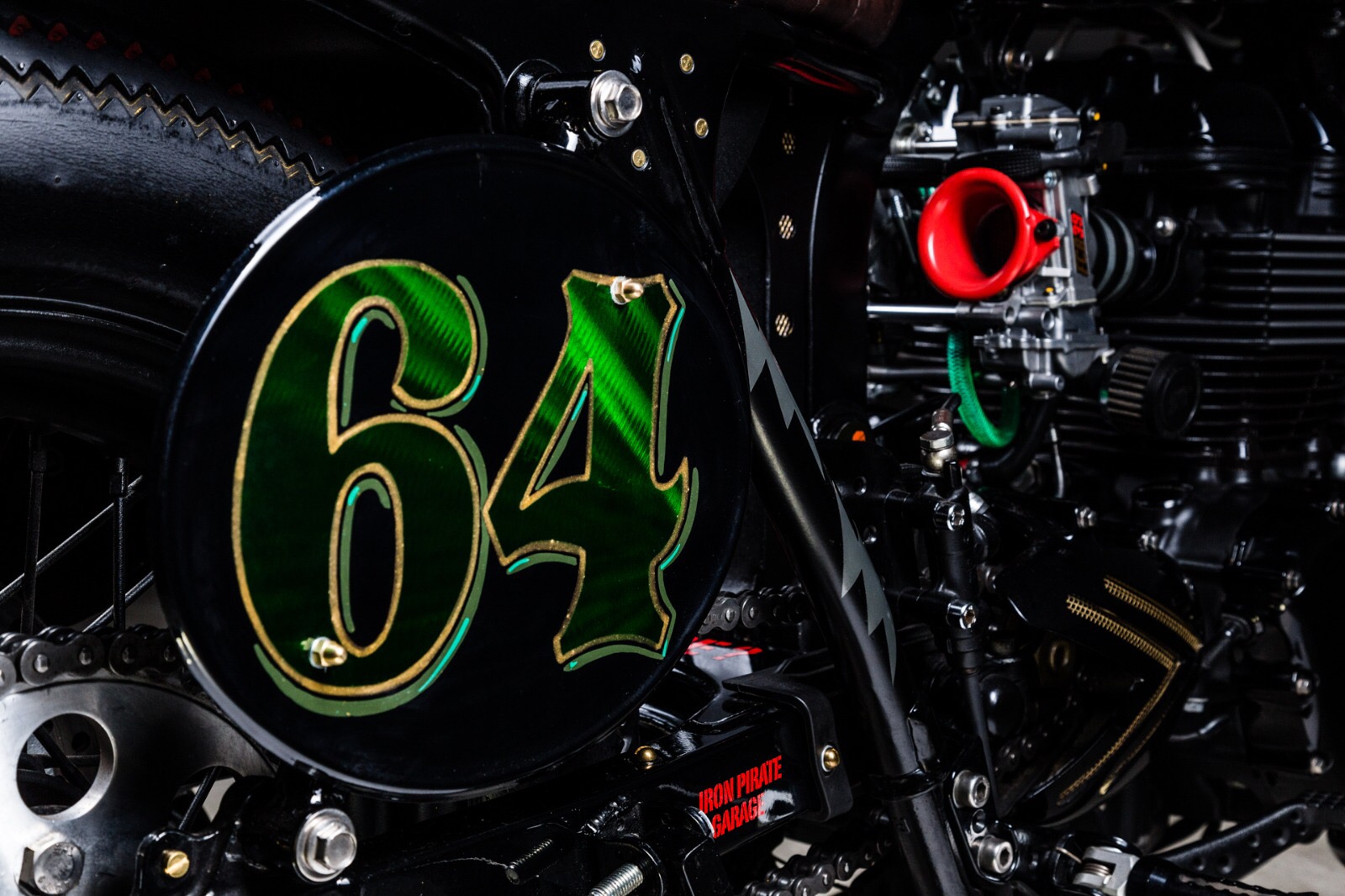 A brace of Keihin FCR flat side racing carbs now amply fills the space under the tank. These were paired with a set of custom-made 2 into 2 super short dragster headers venting either side of the engines side covers … loud…I bet! 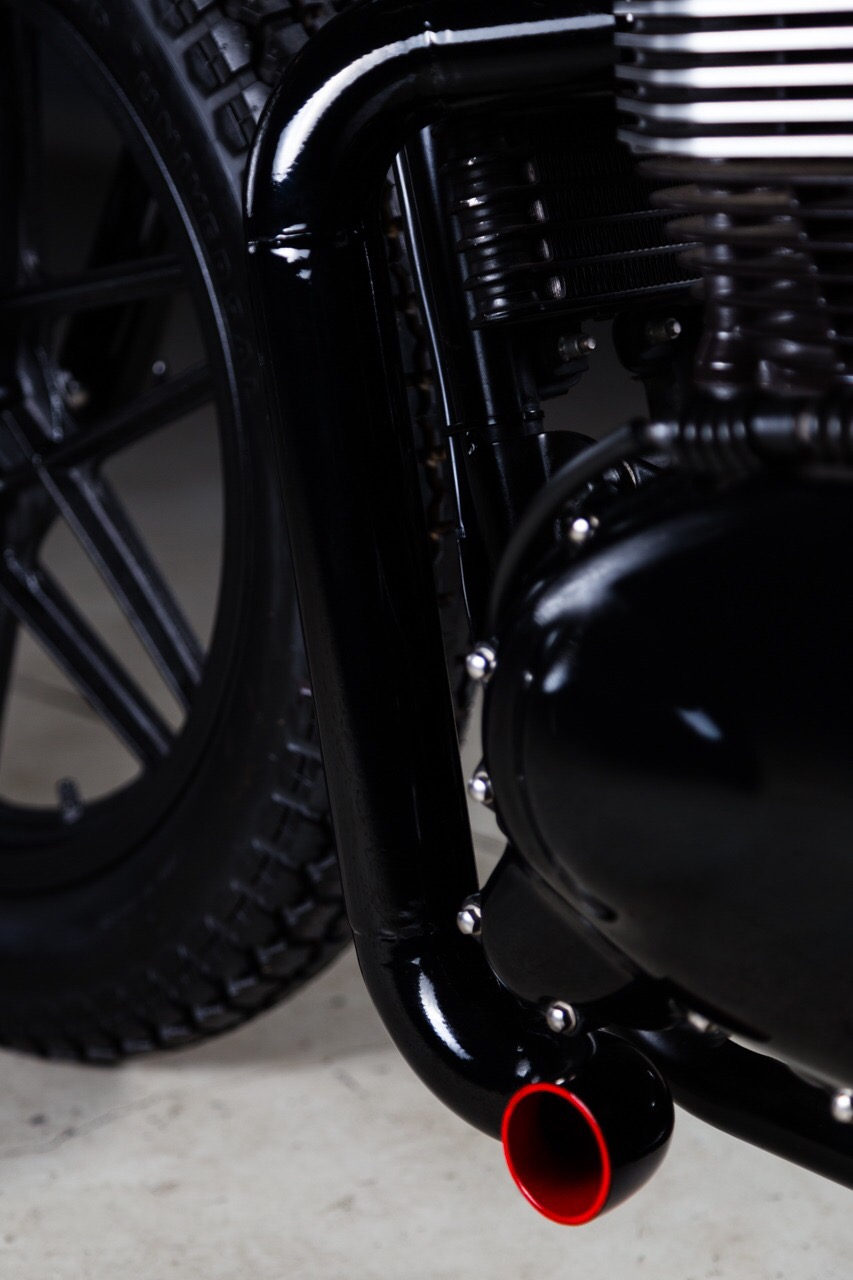 I’m not sure how she will handle… but the Death Magnetic is now looking ready to race!