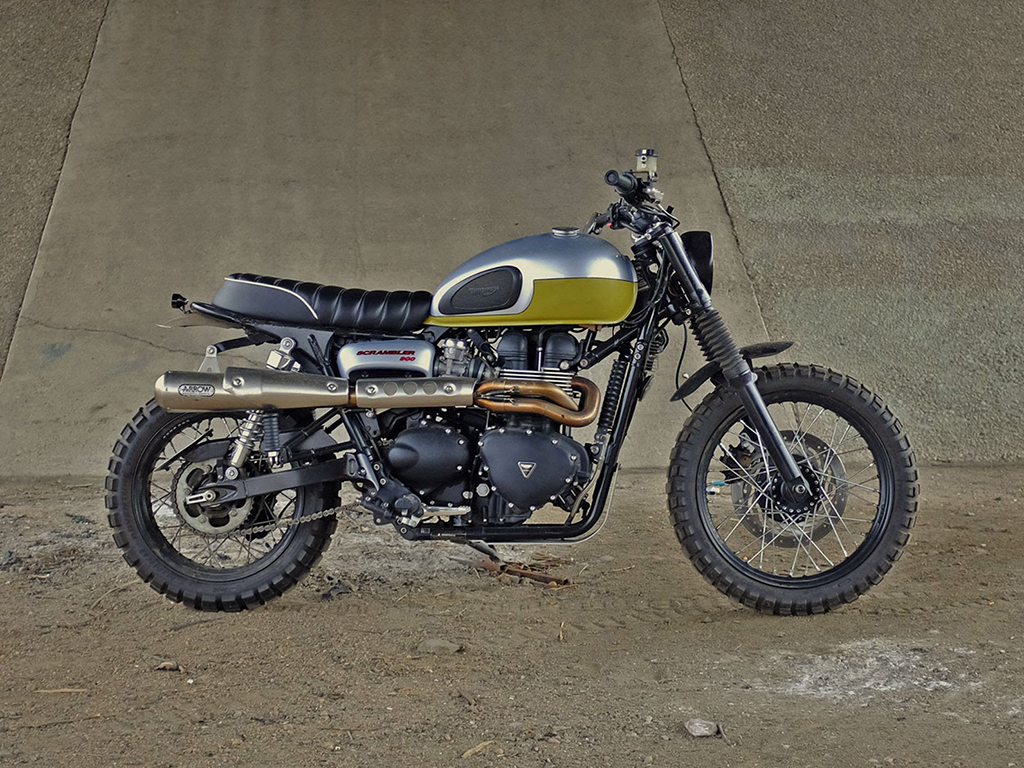 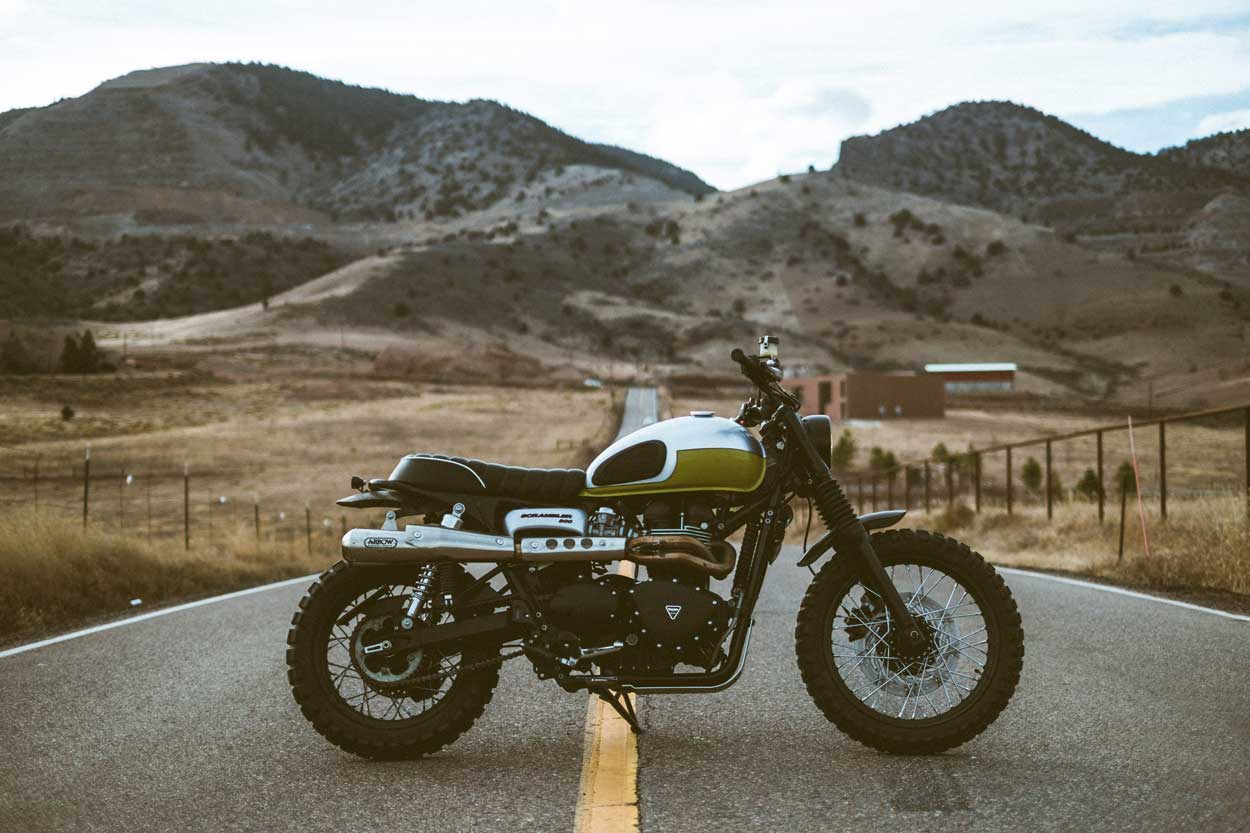 “I’m alone builder working out of my garage in Denver Colorado. I’ve been working on customizing the aesthetics of bikes since 2005. I’ve always loved Triumph scramblers the most, Steve McQueen is my idol to sum it up.  I have done royal Enfield scramblers as well as an awesome Ducati scrambler project I just sold”. 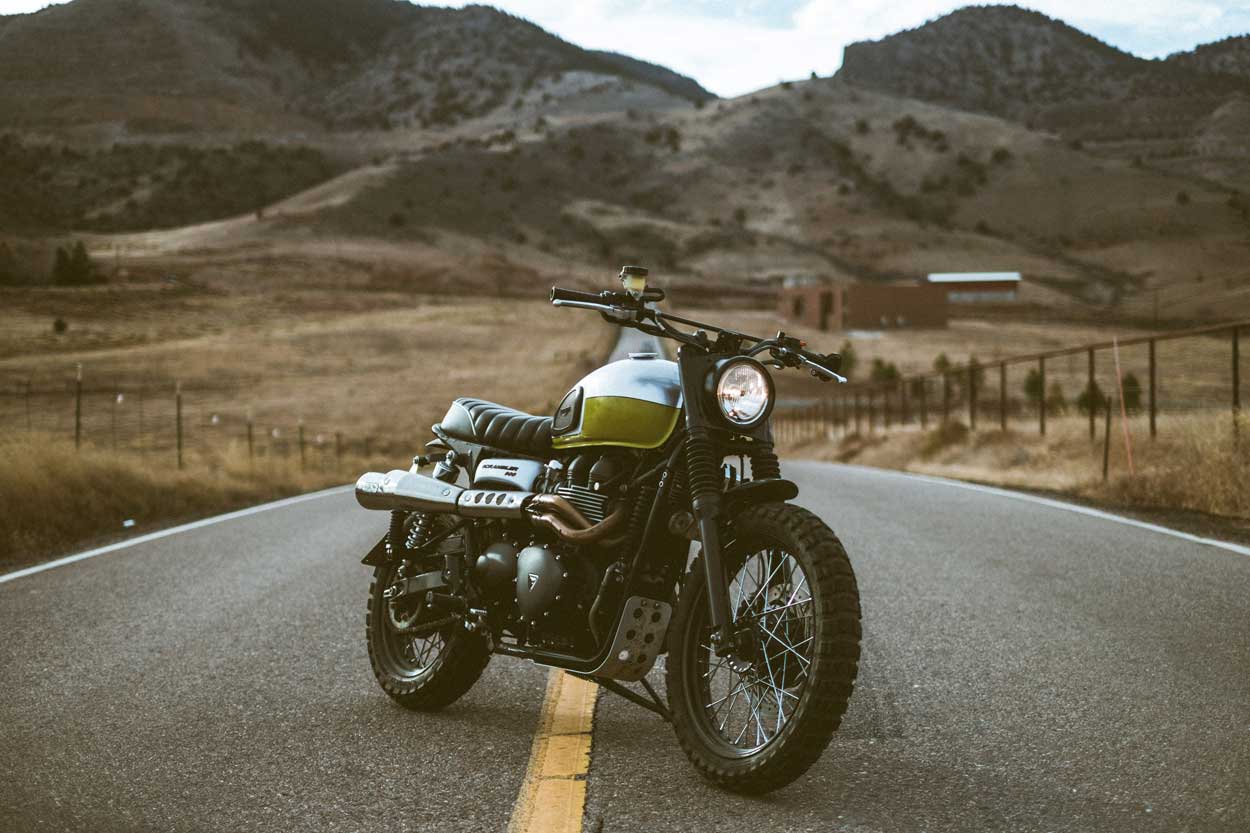 “This current bike is 2015  865cc triumph scrambler. Started out as stock as possible, bright red. I don’t love the colour red at all. So I started with paint, found the ugliest vintage mustard yellow I could and overhauled the tank colour (again, love trying to get this bike as close as I can to a vintage Steve McQueen machine). Also ripped off the emblems… I’m about to put on some vintage emblems actually”. 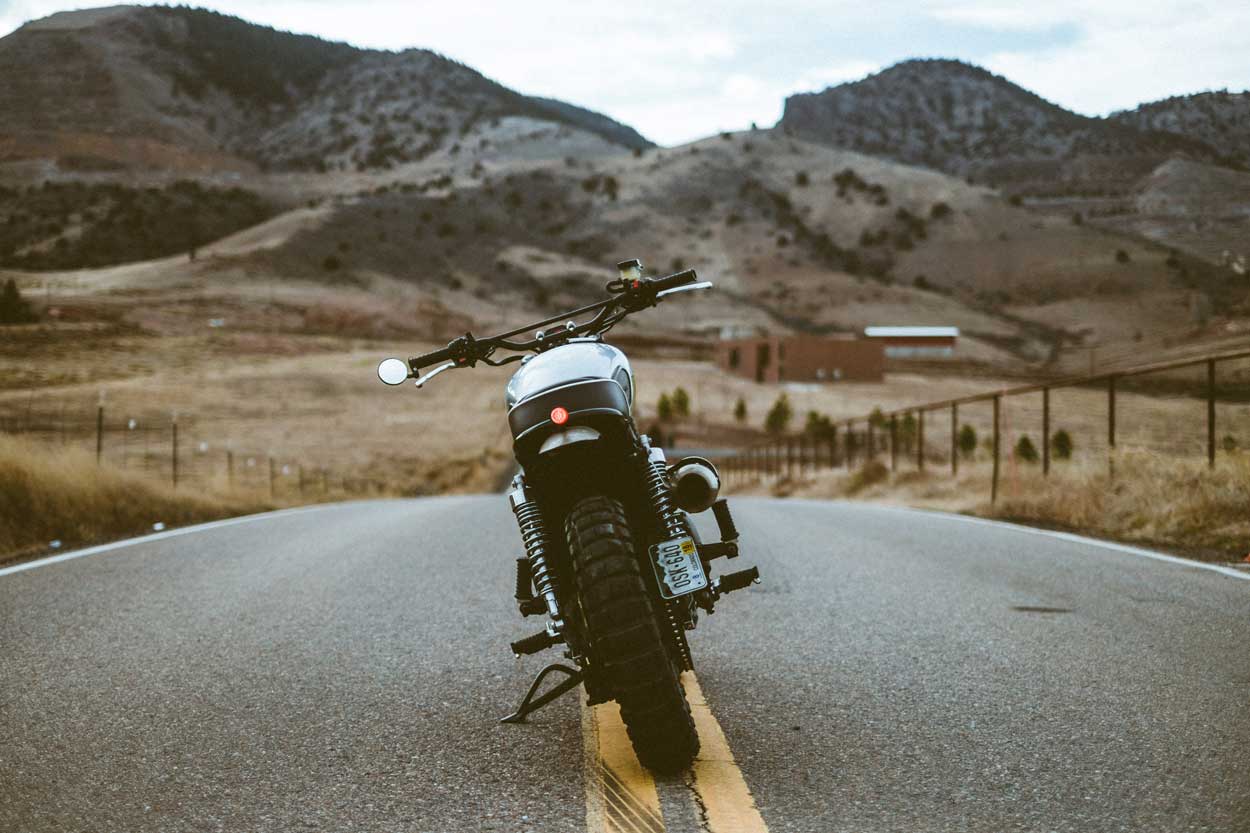 “Then for the exhaust, I always felt the stock scrambler pipes were wayyyyy too long, and especially too long knowing I was going to chop the back seat area off and re-do. So I went with ARROW 2:1 exhaust system – it looks a lot more compact, as well as beef’s up the sound a lot, which fits that mean scrambler feel I’m going for”. 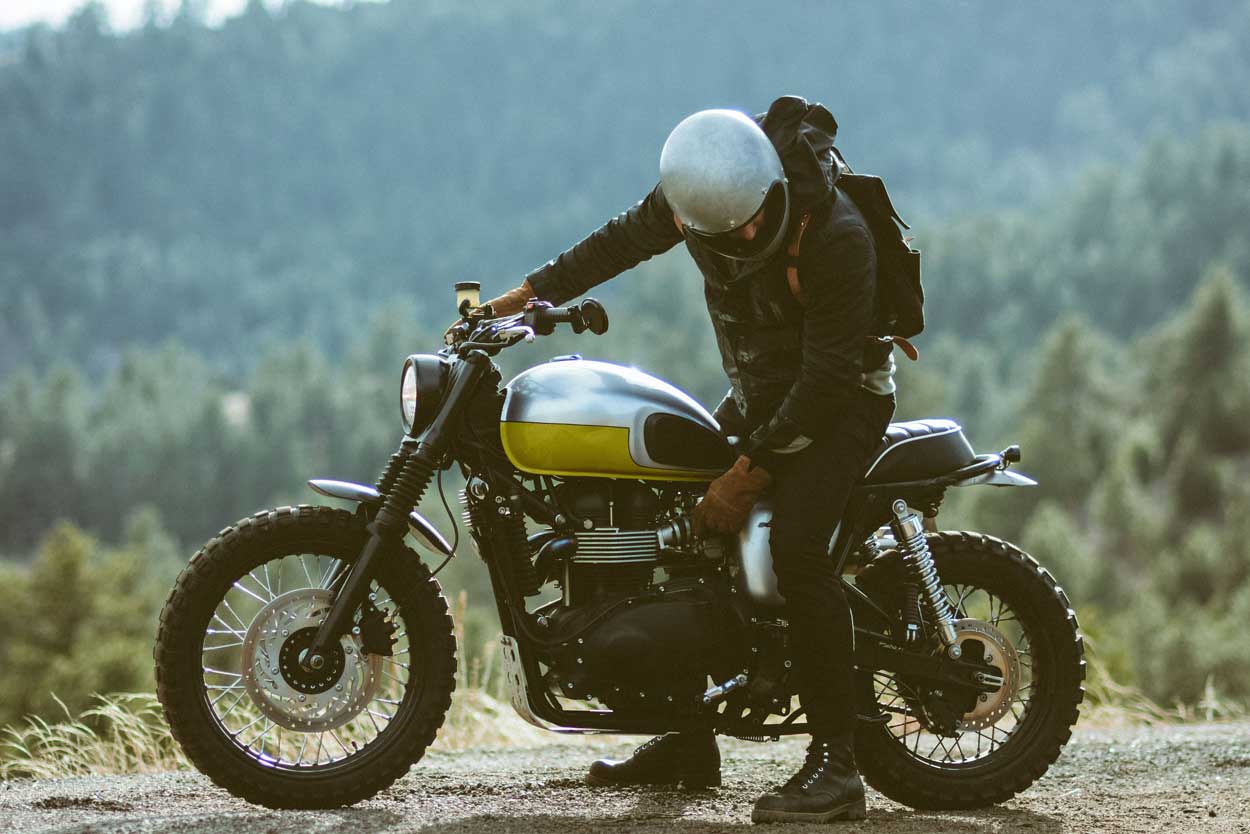 “I mentioned the seat area before – so this was the next thing I tackled, was cutting into the Frame to get rid of the overly long stock triumph seat and back fender area. Again, I felt there was just way too much going on there, to achieve the look I wanted. Welded on a new seat hoop, welded on a new exhaust mount… 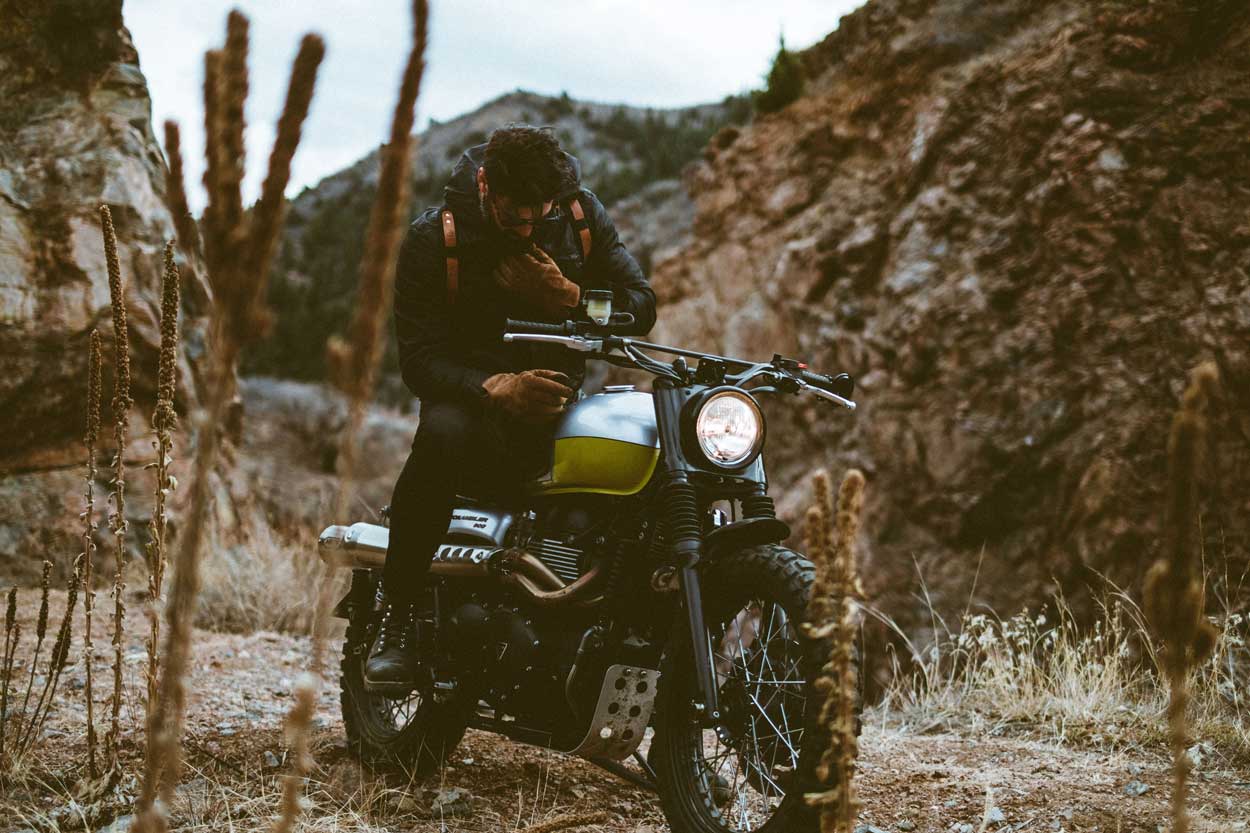 …and then it was time for the custom seat pan and custom upholstery. That was a tough one, and I took a new unconventional approach to making this. I went with high-density polyethene plastic to make the seat pan base. I did this because it was super easy to shape and cut into to get the perfect base shape I wanted. And it was a great material to staple and glue for upholstery. It was a challenge to get the seat pan to wrap perfectly up around the tank base but finally made it work”. 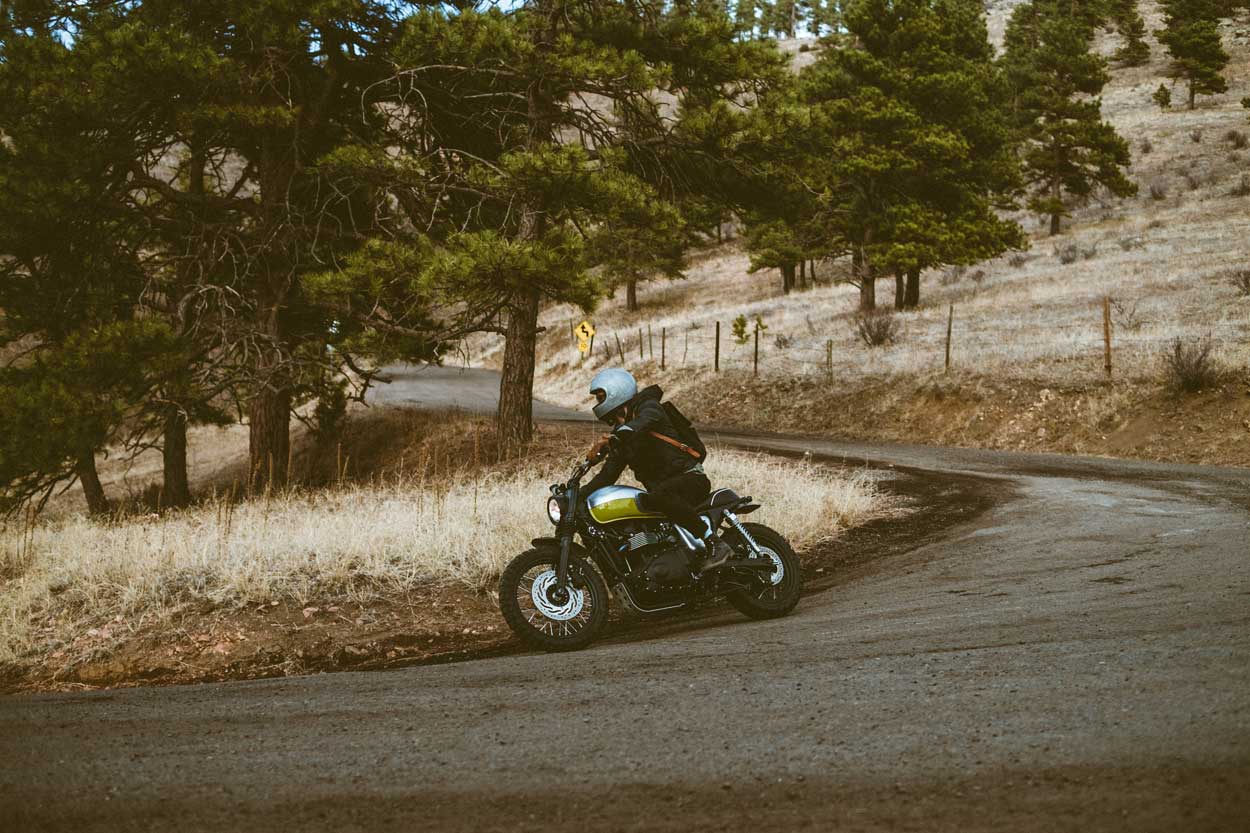 “Next was the seat look and upholstery finish. To be honest, my inspiration was Mr Martini seat, but I tried and tried many times to get ahold of them and never could. So my next step was to have my upholstery shop mimic that same look, without ripping the style off too much. 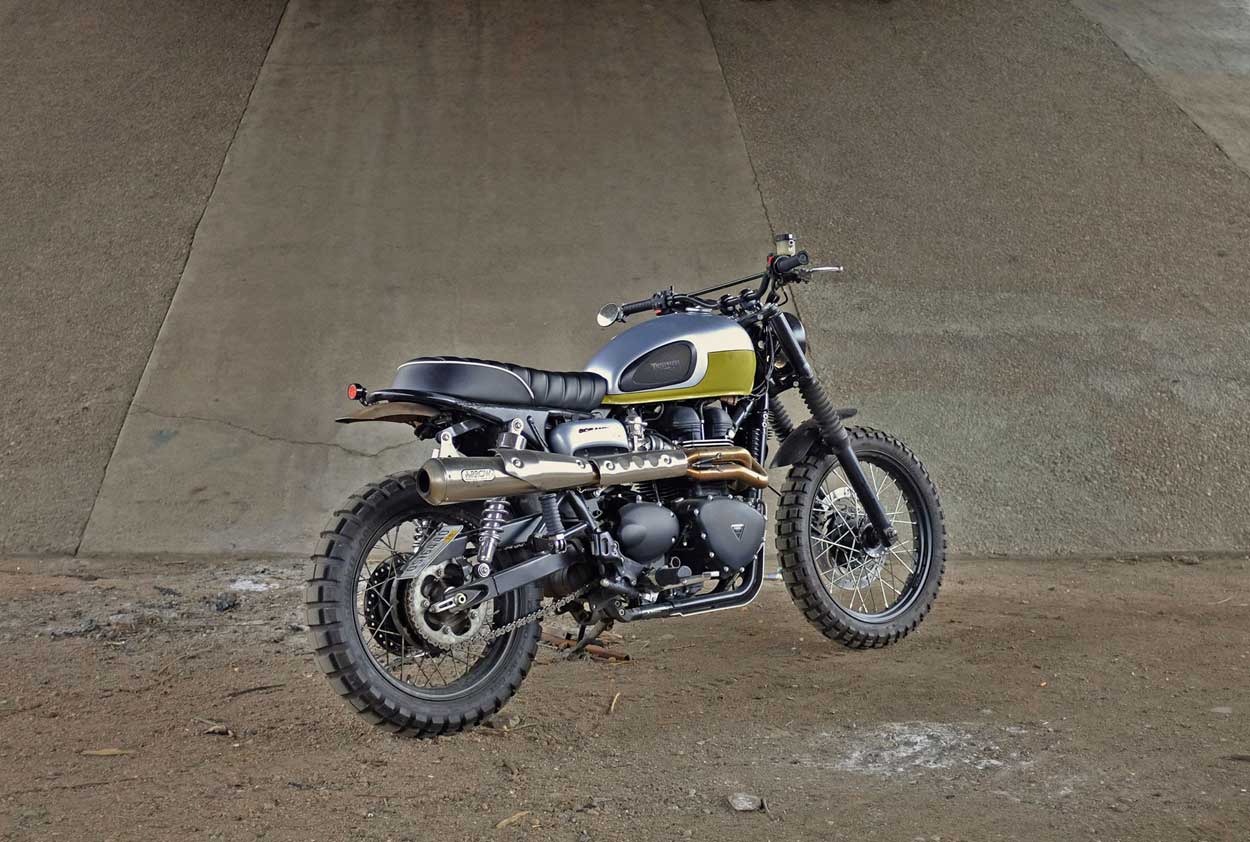 I had the guys at bitchin stitching in Colorado do my seat for me with a nice shiny black, and a nice white details stripe. Turned out perfect. They did a matching crossbar pad too, but its not in my pics”.

“After that was the rear fender and light. I bought a nice rough steel 6” bobber fender for the rear. I cut it down and shaped it to match what I needed. The product I received was way too long for the little minimal fender I wanted to achieve. And then I popped an awesome 1.25” “Speedster” Taillight on there from prism. Super bright and nice”. 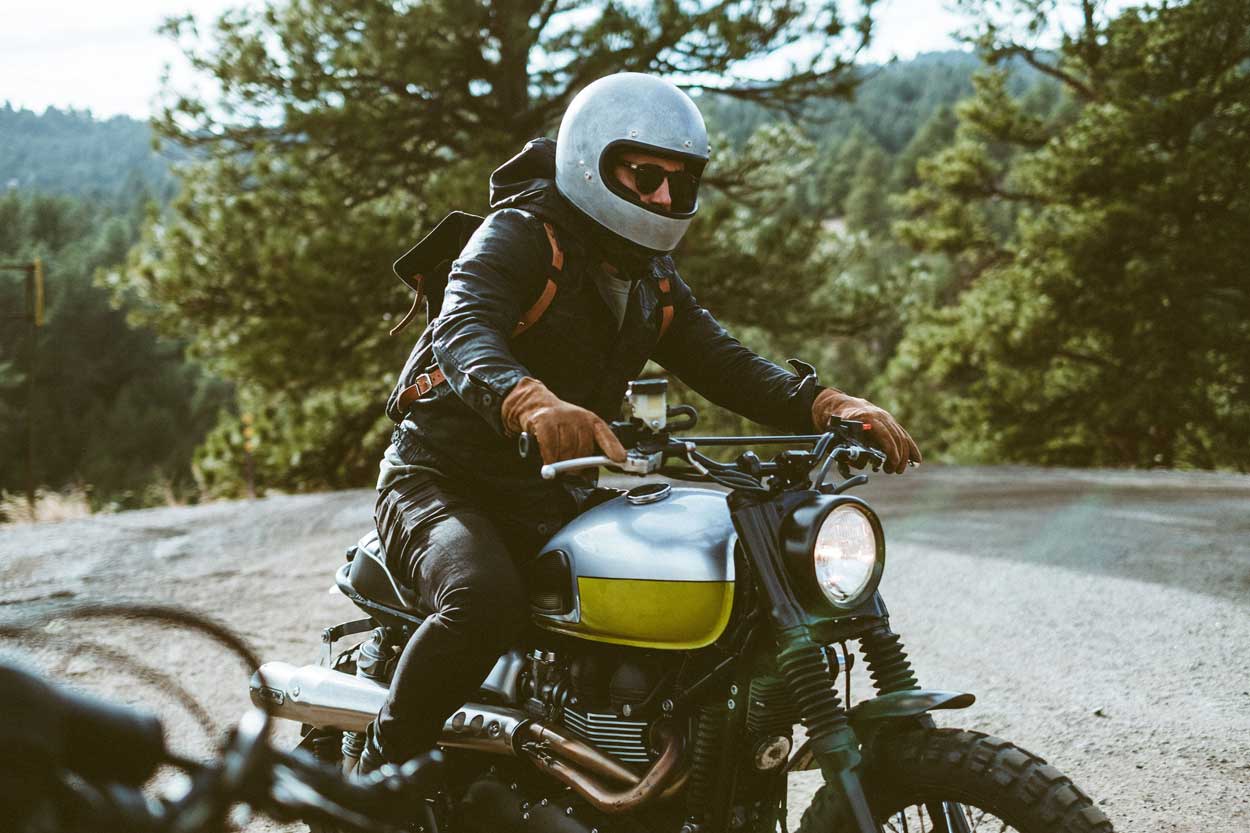 As for the tires…I was torn between tkc80 (which I usually put on all my scrambler builds) and the Shinko 804 touring tires. This time I went with the Shinko and I love them. Look and ride are great! 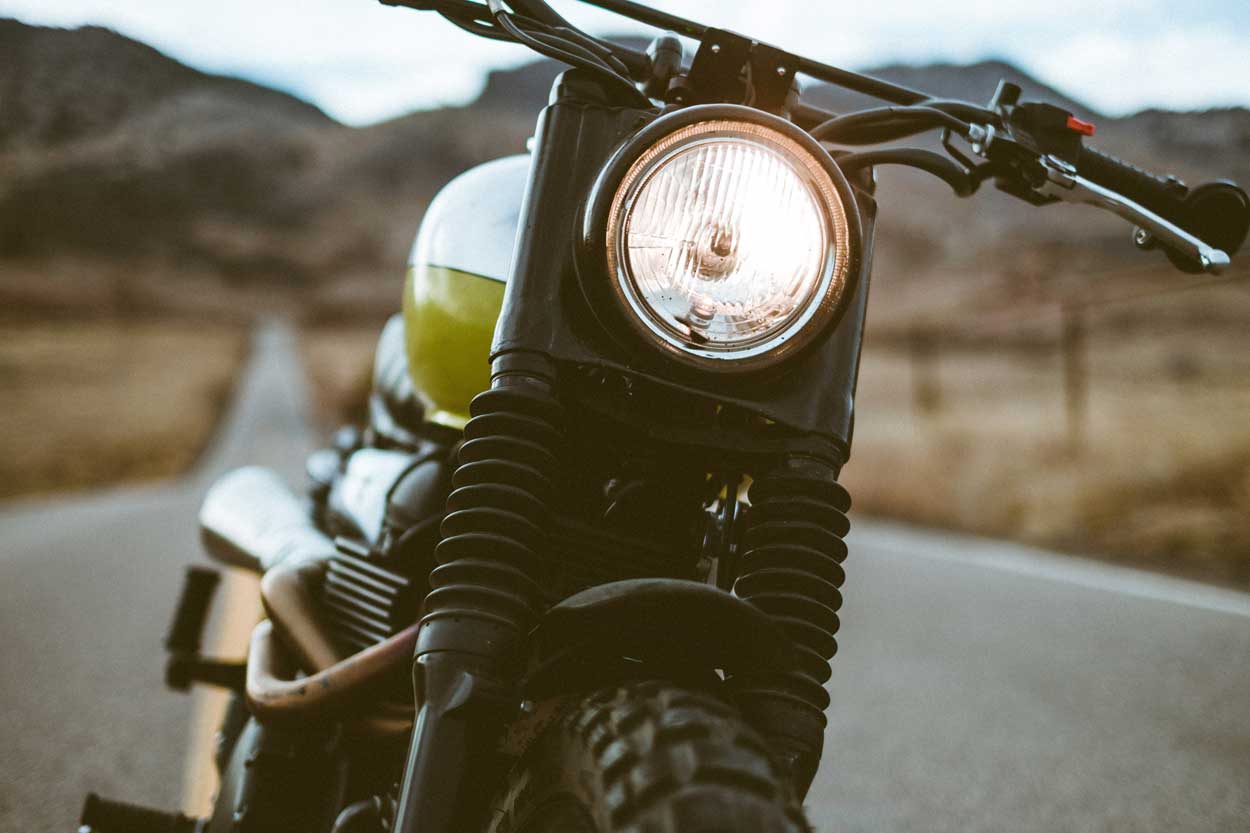 Next, and a big challenge was the bars, speedometer and the headlight. The bars were basic low profile ate bars, with a built-in cross/pad bar. the speedo was from Motogadget mini. It gave me the super low profile look I wanted, almost looks like there isn’t even gauges up there. And same with the headlight. JVB headlight mount made the bike feel super compact, gave it such a nice unique look. The headlight and the Motogadget were by far the toughest to deal with, in fact, I had my friends at Erico Motorsports in Denver jump in and help a bit. We also had to move the ignition a bit for this. Was a bitch, but worth it! 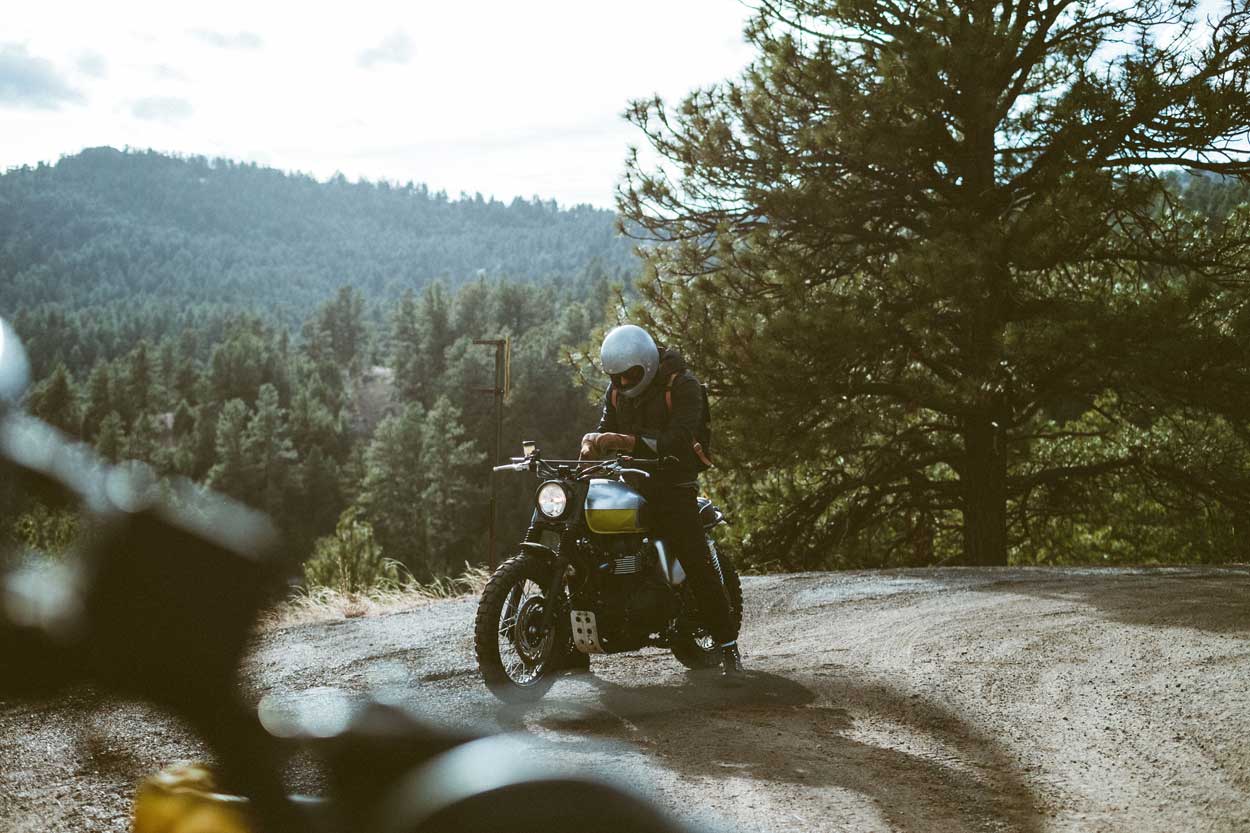 “For the front fender… that was a fun custom project. I actually bought a normal short front fender … but then I customized a mount/lift addition underneath to lift if 2 inches off my tire. I don’t love the super high fender look I see on some scramblers .. but it only makes sense to have a tiny bit of distance between tire and fender on a scrambler build, so I wanted a little.
I think that is it… once we were done we had my awesome friend Enrique shoot some shots on a Colorado mountain ride.. https://www.instagram.com/eparrillaphotos/ – and now this thing is set to do more colorado camp trip rides… pumped for summer!”
Parts Used:
Custom seat
Headlight
Pipes
Tires
Taillight
Speedo

Photographer
Why not submit your custom or modified Hinckley Triumph to Bloggers Bikes?