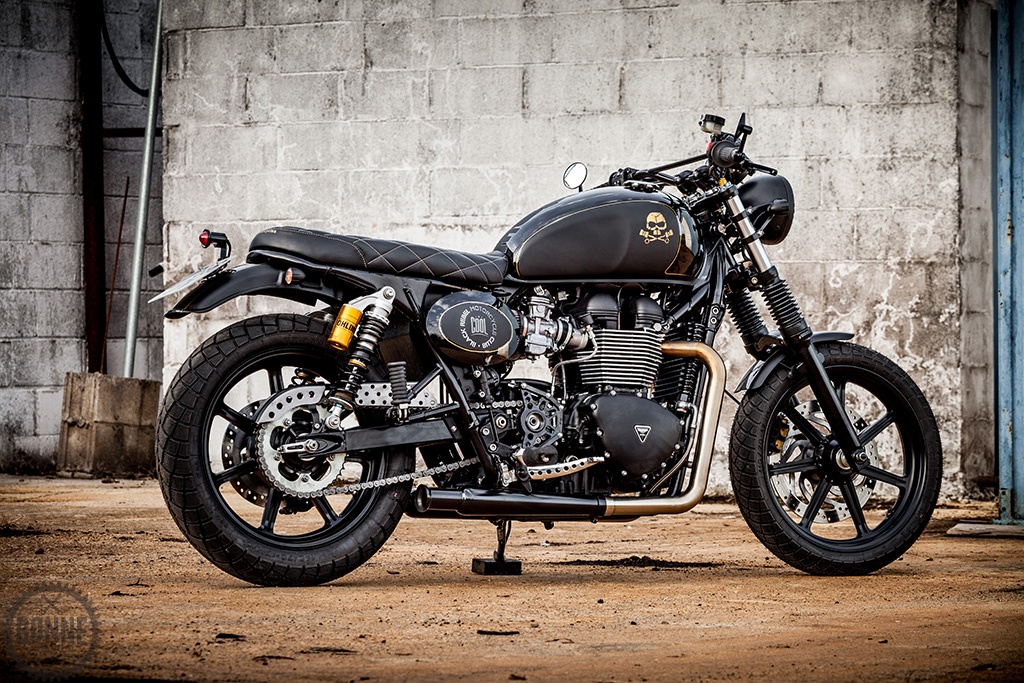 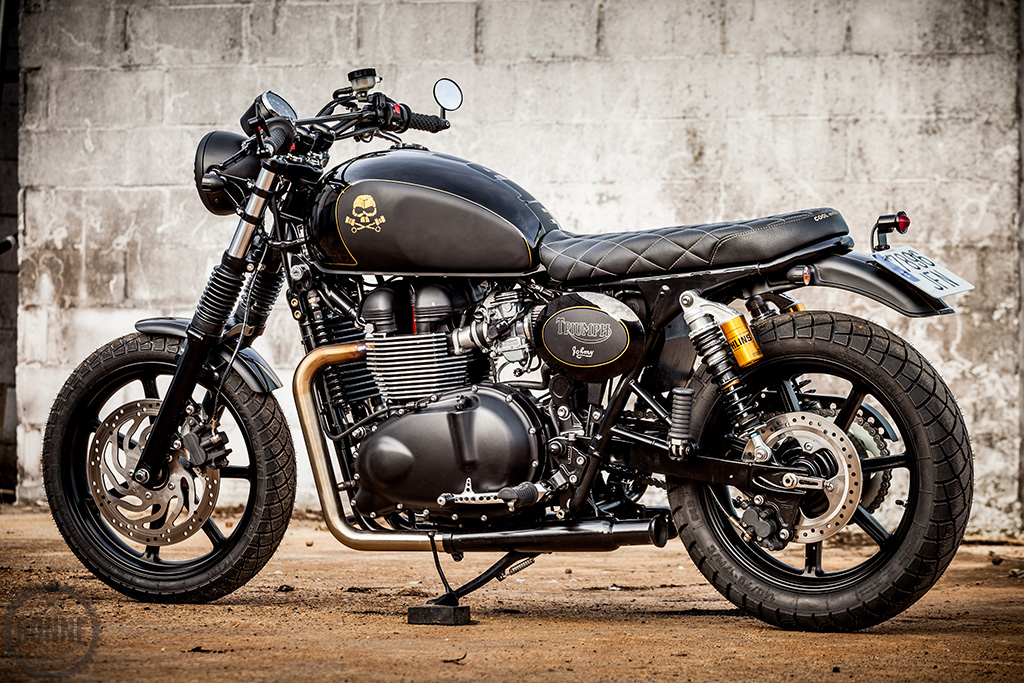 Here is another great looking dealer build by Javier Alvarez and team of Cadiz based COOLmotorcycles – who are proving that the cast wheel Bonneville is just as ‘COOL’ as its spoked wheeled brethren. The bike has been cut in all the right places, work which was carried out in-house by Raul “Metalman” Toledo, who also made the seat base, which was then covered by Barcelona based X-Sits. The bike was then fitted with a custom mudguard and a Vintage tail Light which also incorporates the numberplate mount.

At the front of the Bonneville are braced 7/8 MX (probably Biltwell) handlebars with stock switches, Biltwell Grips and a very nice set of Joker Machine levers and finally a set of Bar end Mirrors. The stock speedo bracket is gone, having been replaced by one from the Free Spirits catalogue of goodies.

The handlebars and controls lead us down to a grilled headlight supported by LSL brackets fitted with Shin-Yo Arizona turn signals, and on to upgraded fork which now feature adjustable ANDREANI hydraulic cartridges, fork gators, Norman Hyde fork brace and a modified front mudguard. At the back the ANDREANI fork upgrade has been balanced out with a set of Ohlins rear shocks. 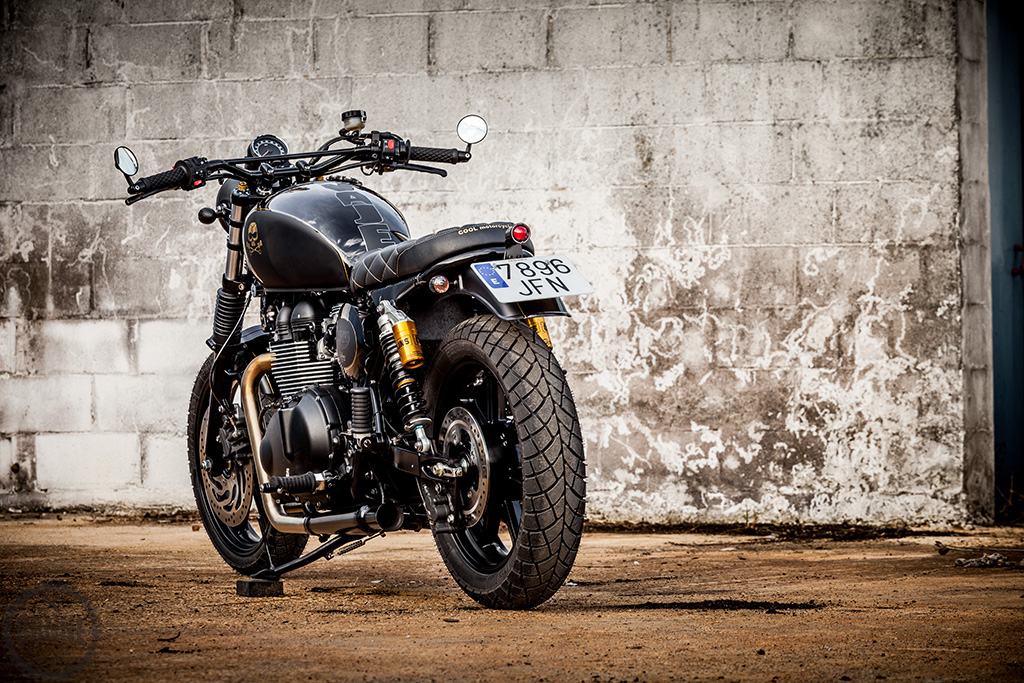 The engine hasn’t missed out on the upgrades and now features a set of custom headers with modified Black epoxied EMGO end-cans, which when combined with the Airbox Removal Kit and K&N filters should give this Triumph a little more get-up-and-go. The engine also features a British Customs Oil pressure gauge and a CnC’d Joker Machine Sprocket Cover. The guys at COOLmotorcyles have then given the stock Brake pedal, Gear selector and chain guard literally a bit of a drilling, to great effect. 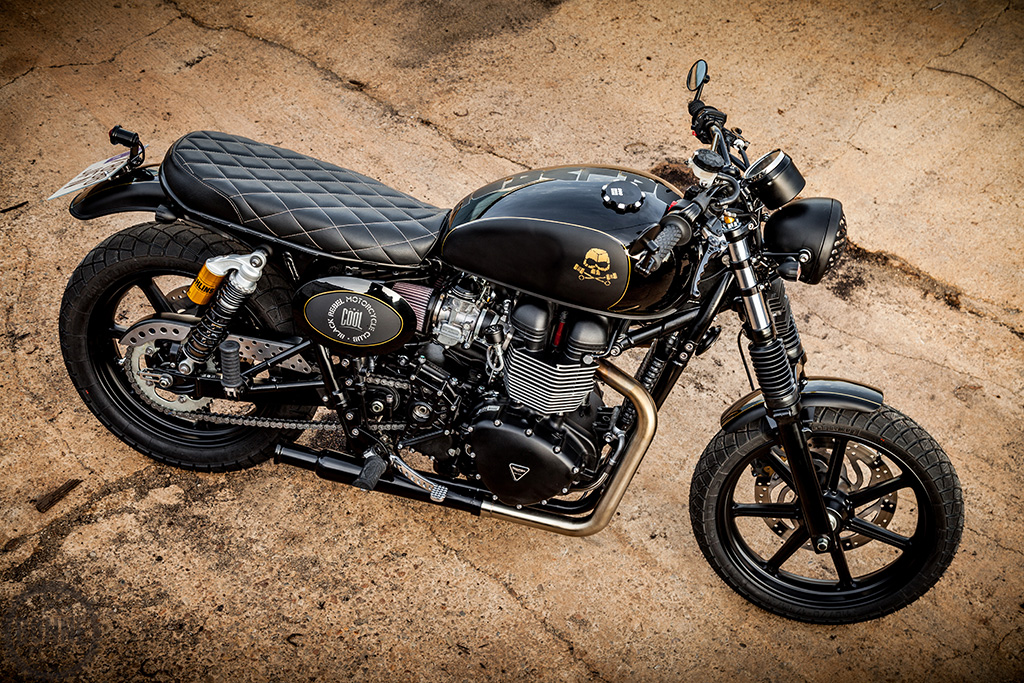 The ‘Salvaje‘ has been finished off by Fran Heredia in gloss black, with satin side panels featuring a gold Skull and cross-bones with gold pin-striping, along with the word ‘Salvaje’ (Wild) emblazoned along the top of the tank, which has then been topped off with a Joker Machine gas cap. The side panels have been replaced with after market items, which like the front and rear mudguard, has not missed out on the revamp, being painted to match the tank.

Finally we are back to those unpopular (for some) cast wheels, which  have been painted black, before being fitted with a set of  Heidenau K66 tyre front and rear.

Previous
Down & Out Triumph T100