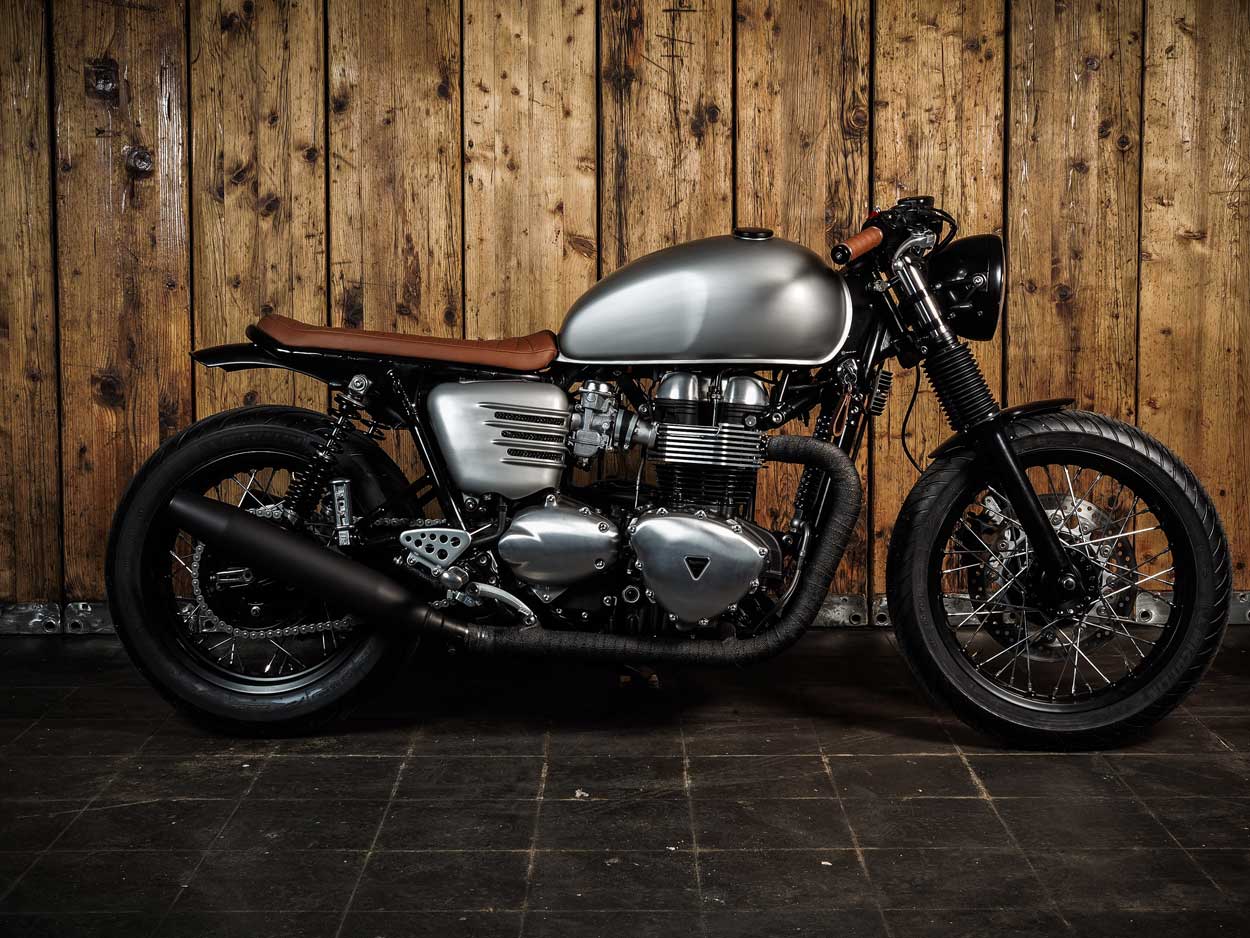 The team at Rheda-Wiedenbrueck Germany based Classic Bike Raisch certainly know there way around a Triumph Twin, stylishly demonstrated by the Raisch 1200cc Thruxton R Bonnefication featured in November of last year. 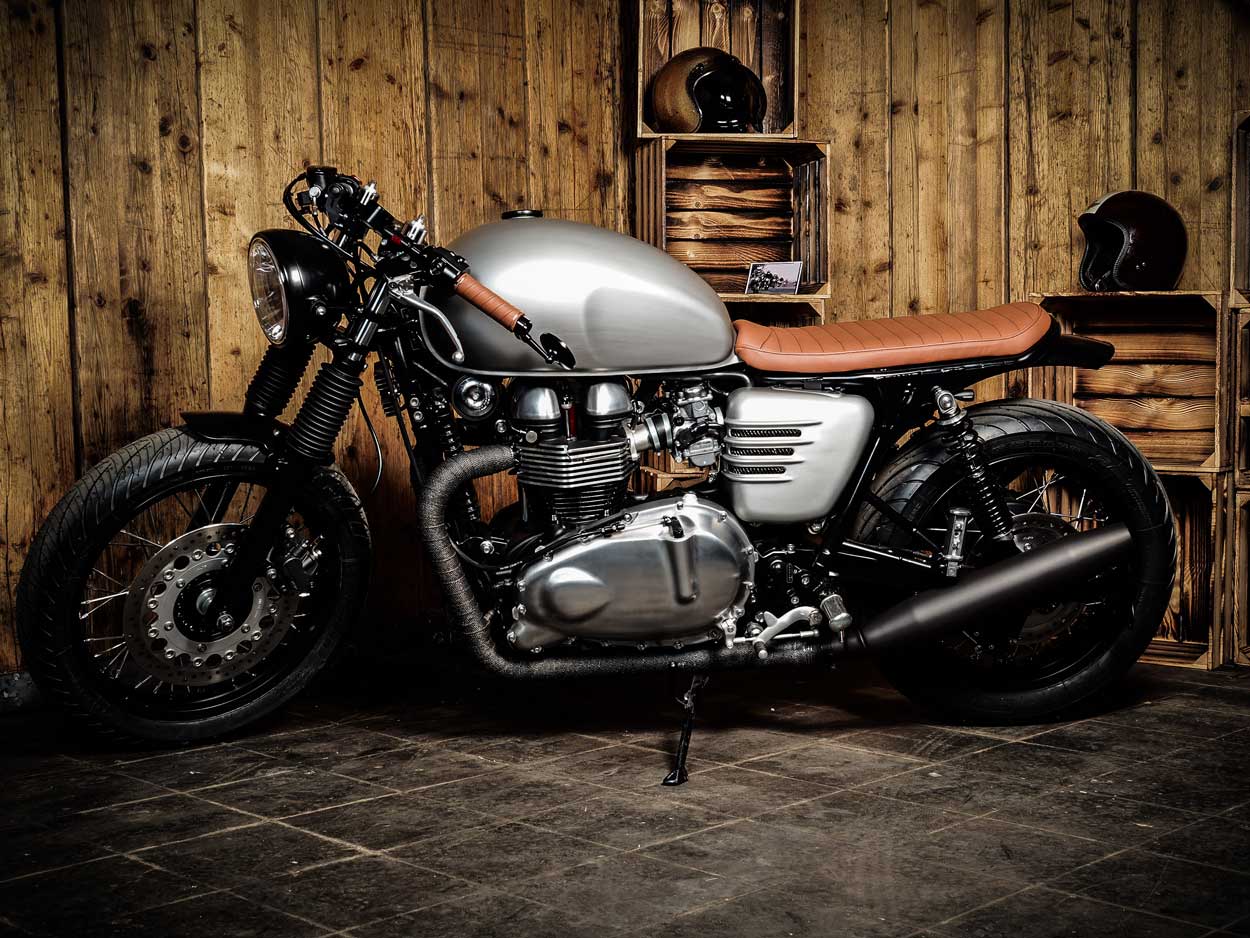 That state of the art water-cooled machine primarily focused on performance, this air-cooled EFI Thruxton named the ‘Silver Beauty Queen’ does the same, but its also a super cool, and pretty fashionable custom Triumph Twin that retains practicality and everyday rideability. 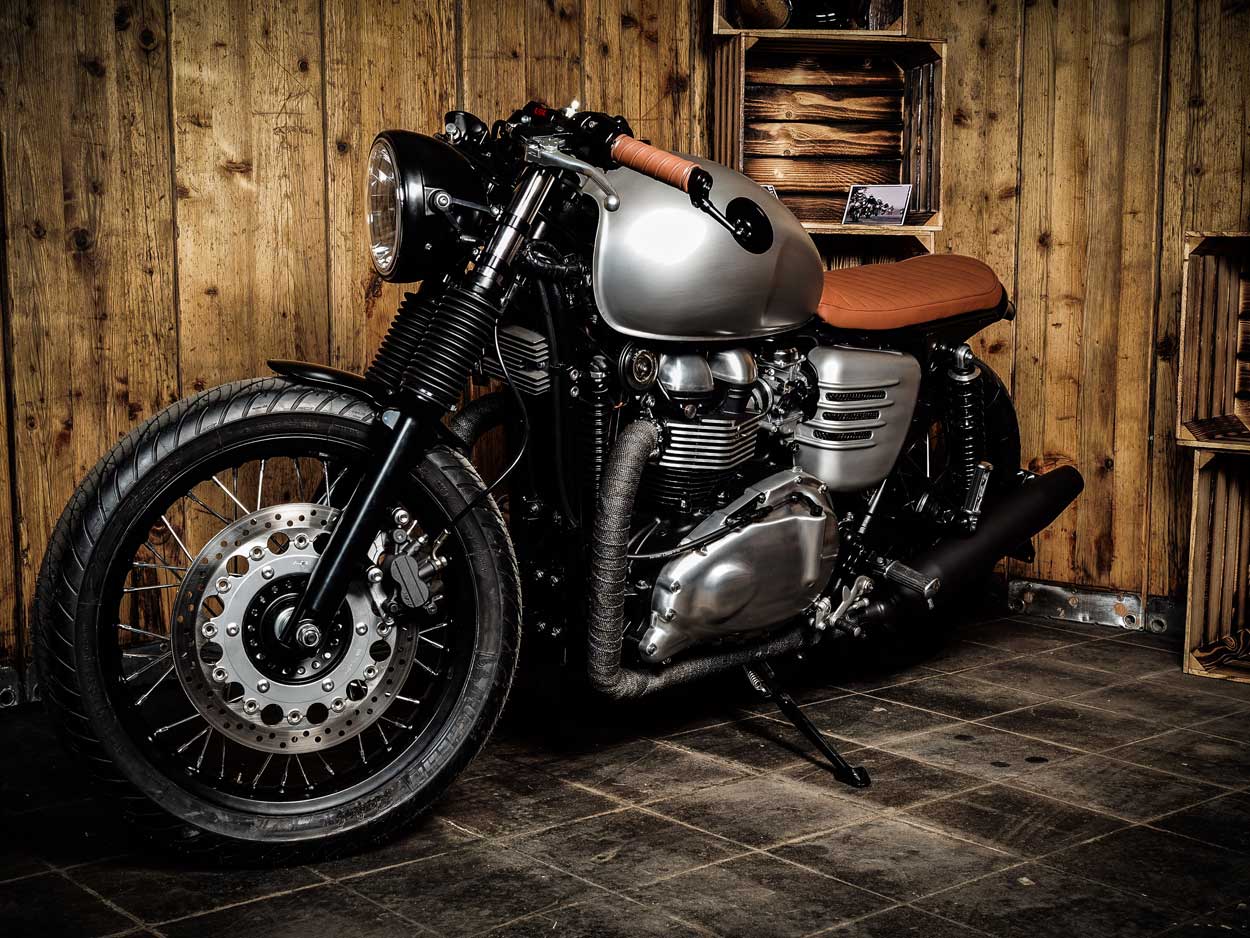 Getting the 865cc air-cooled twin cylinder engine to produce its 93hp / 90nm was comprehensive and include a machined cylinder head, bigger valves, and a Sharp camshaft. Other upgrades include shaving 1.2 kilograms off the flywheel, taking it down from 4 to 2.8 kilograms, fitting beefier clutch plates and springs and modifying the inductions system by drilling the stock EFI bodies from 36 to 39 millimeters. With the removal of the air/battery box, K&N air-filters were fitted and paired with a black 2>2 Remus exhausts system. 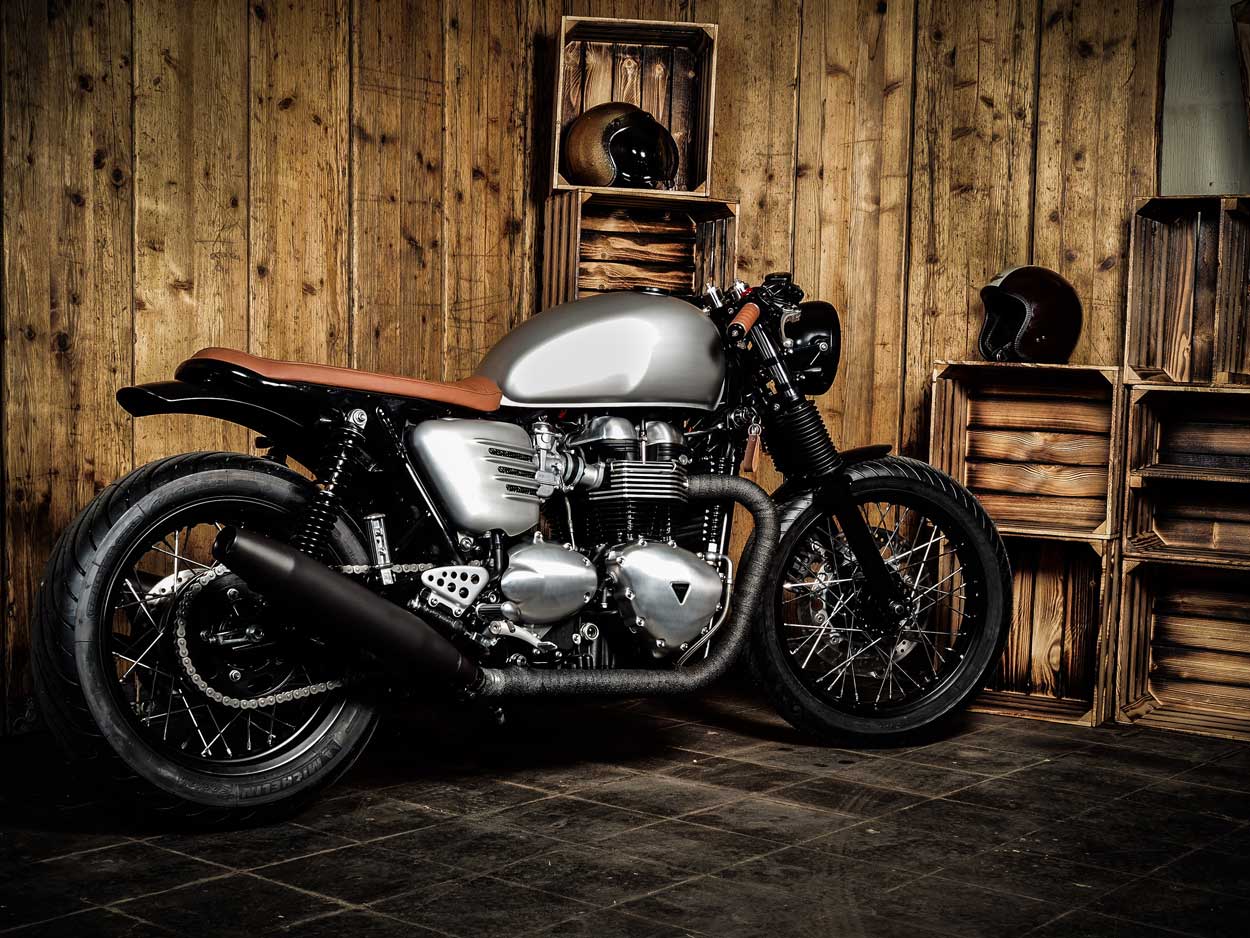 The frame on this Thruxton, like those on many custom Triumph Twins, received the usual modifications, helping to balance and improve this Twin’s overall aesthetics. Cutting and looping may not be a modification many are willing or able to undertake in the comfort of their own workshops. Finding someone like the chaps at Classic Bike Raisch to undertake the work may be the answer, with the results being a great looking machine. 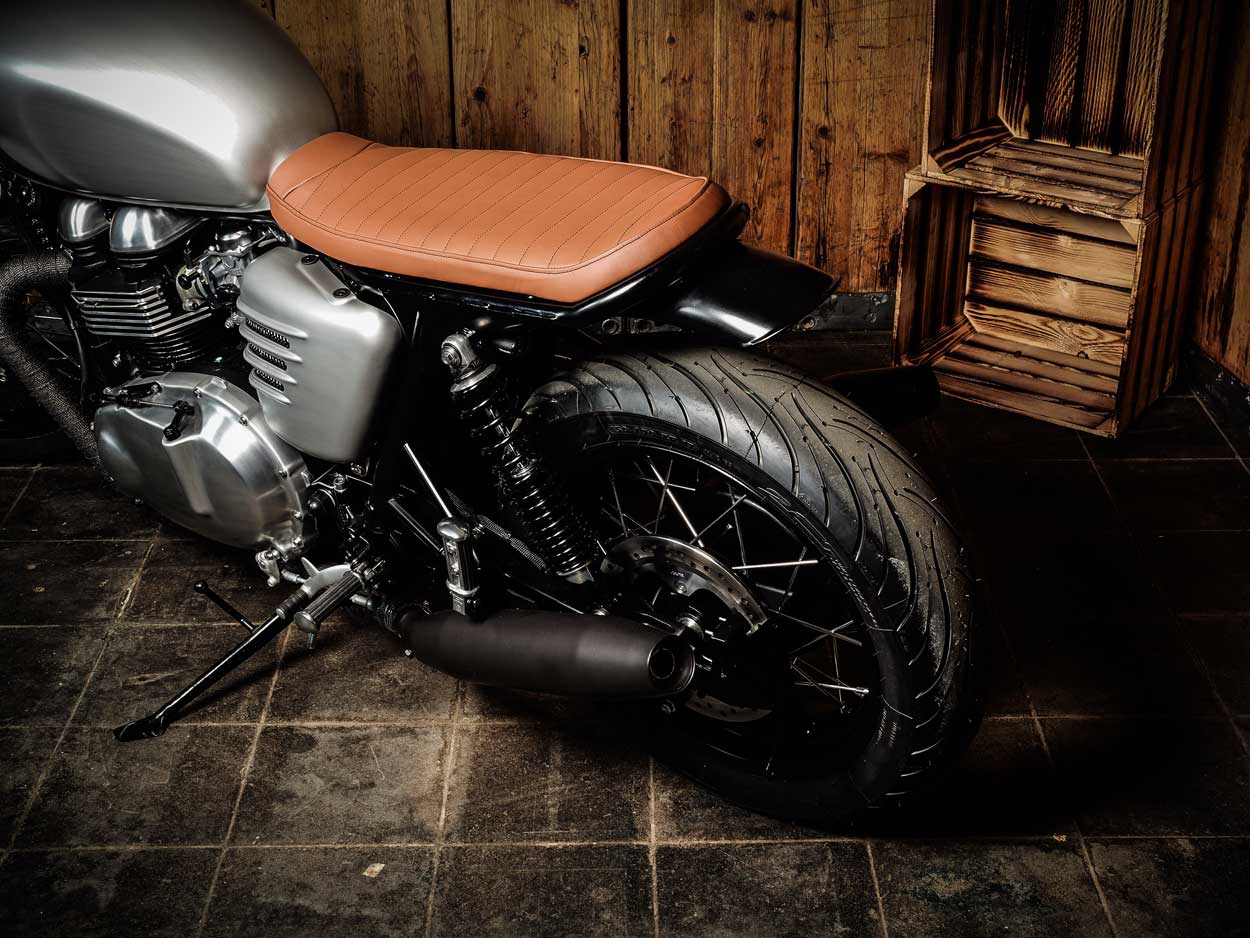 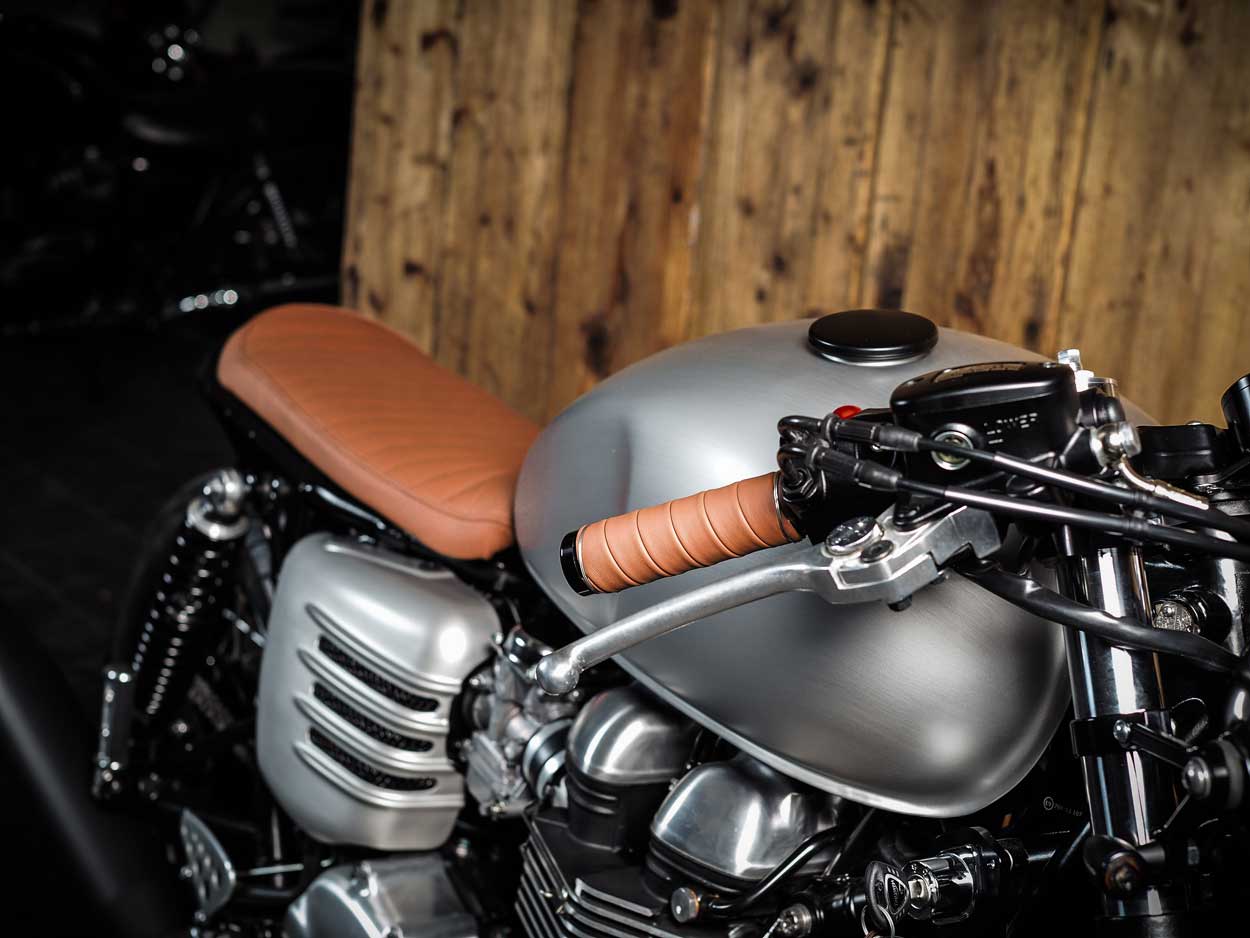 A slim aluminium mudguard was sourced and modified to fit, which like the front is finished in black, and kept clean by relocating the taillights and turn-signals to the rear shock mounts, while the number plate has been moved to the left hand side of the swingarm. The result is a sportier stripped down tail end, much like the mid-sixties Triumph TT or Trophy Special. 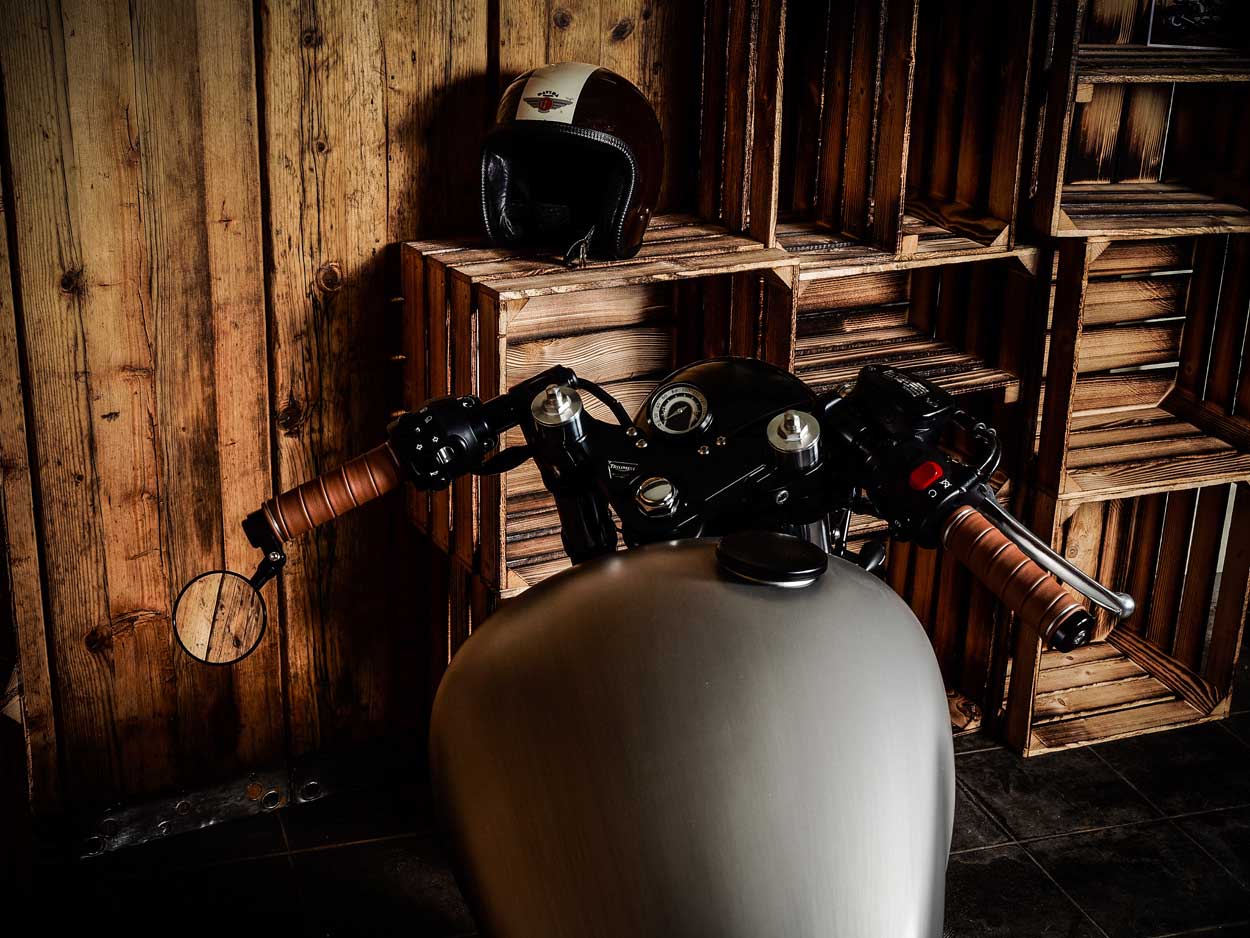 Keeping the Thruxton Cafe racer style is a set of LSL Match Tour High clip-on’s, fitted with the stock switches and levers – in between which sits a Motogadget mst Speedster analog speedo. The slimming down process continues with the relocation of the rectifier and ignition switch to the usual places using LSL brackets, with the headlight mounts being swopped for shorter LSL items fitted with bullet turn signals. 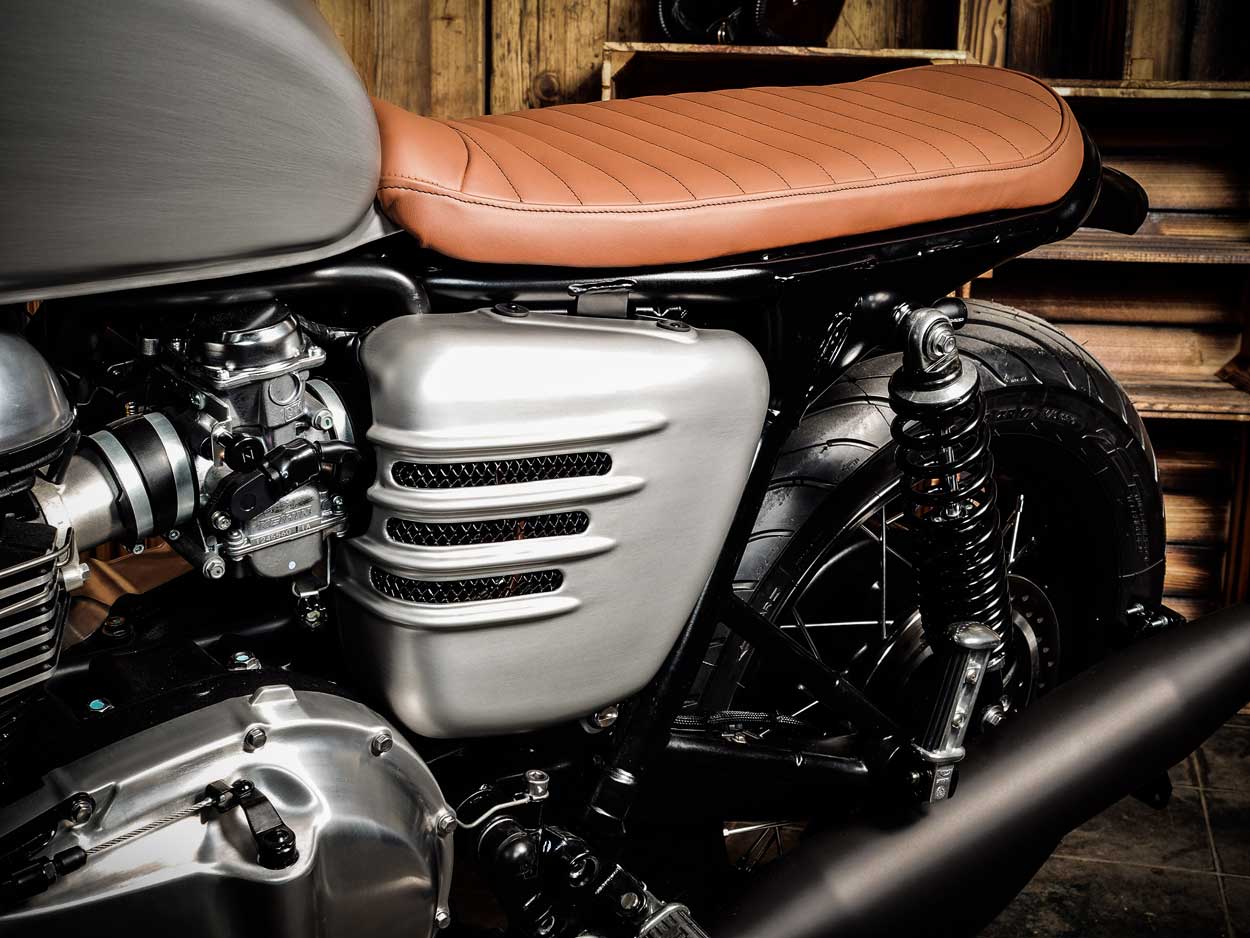 The EFI tank and Motone’s vented fibreglass side covers which appear to be crafted from brushed aluminium, are in fact painted using a costly and complex process of laying down layers of silver paint containing black particles, this is then brushed and clear coated to achieved the desired effect, To add contrast, the fuel cap, chain sprocket and headlight bowl have been powder coated black. 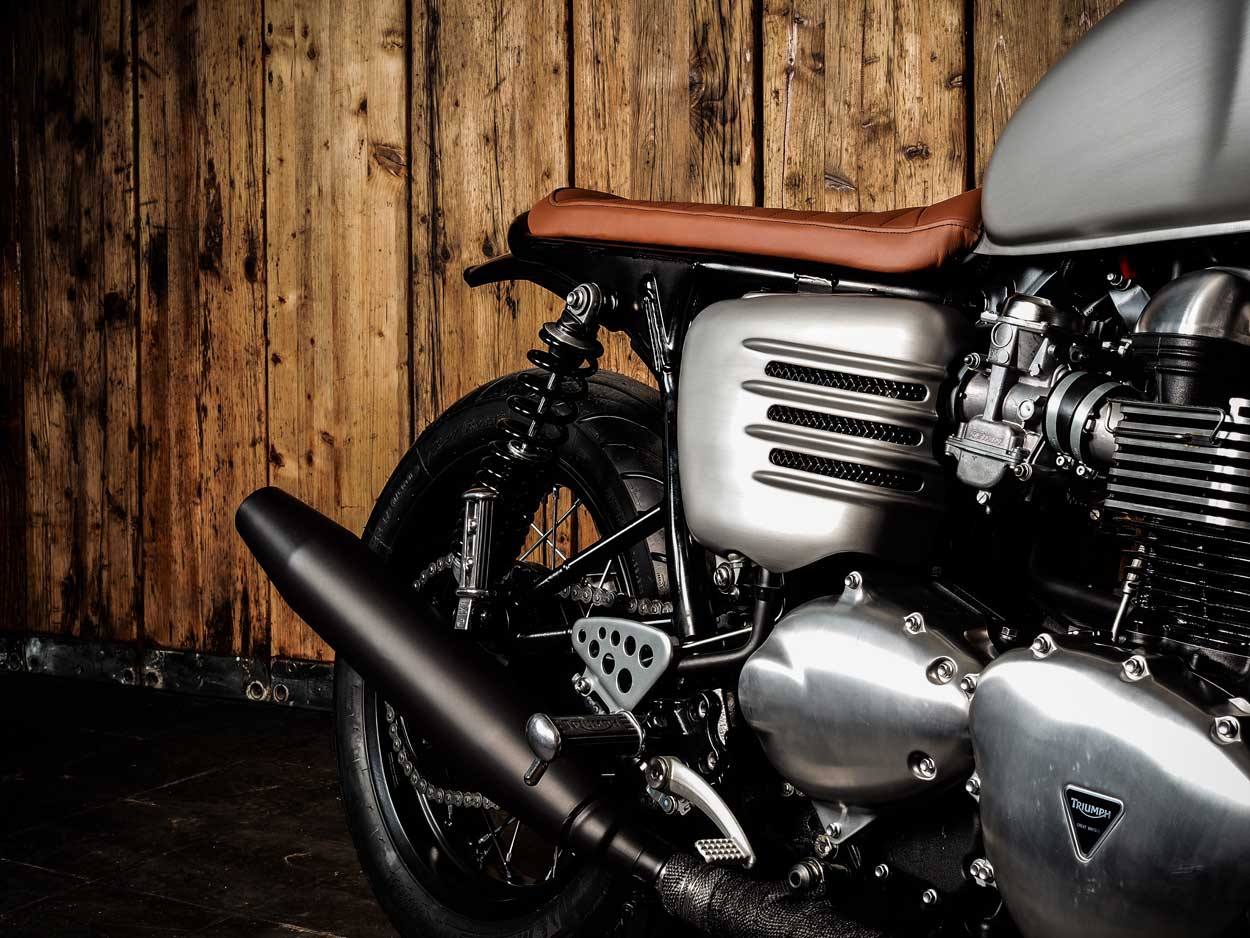 The Thruxton now sits lower on a wide 17″ rear wheel, which like the front is wrapped in Michelin’s Pilot Road 3’s (150/70 ZR 17 rear /110/80 ZR 18 front ) lowered using shorter rear shocks and dropping the forks through the yokes – forks which also received a new set of cartridges and gators. 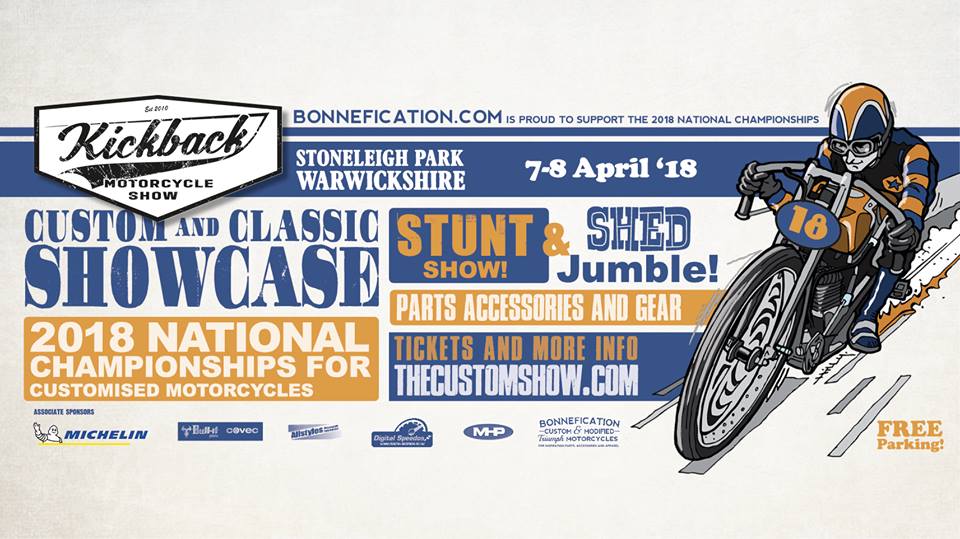 If you have a custom Triumph motorcycle of any year or model, why not enter the Bonnefication sponsored ‘Best Modified Triumph’ category at the 2018 National Championships being held at Stoneleigh Park in Warwickshire on the 7 and 8th April.