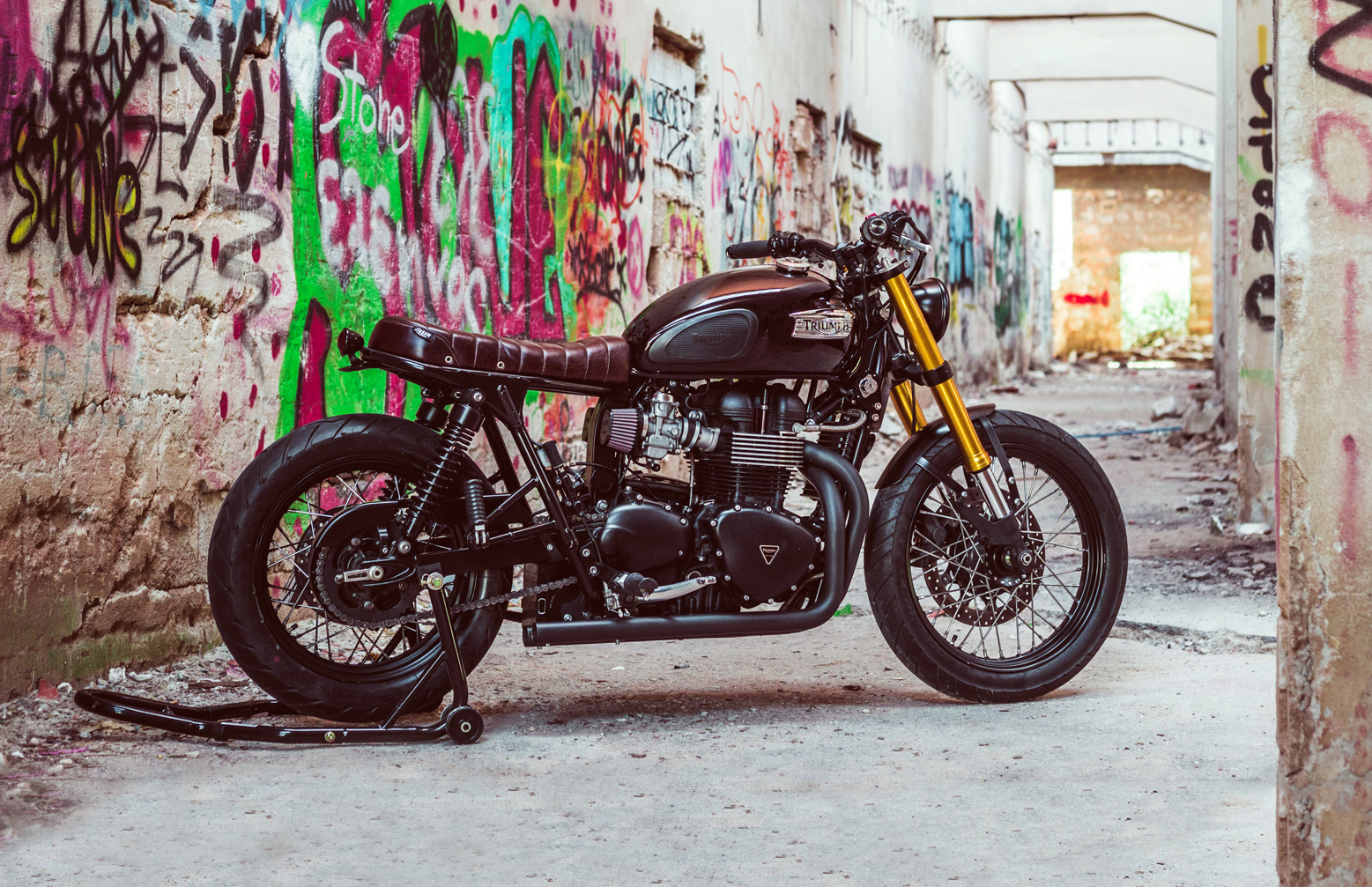 ​This attractive stripped down and naked 2012 Air-Cooled EFI Triumph T100 was built by Petros Chatzirodelis, the owner and founder of Jigsaw Customs, a vintage retro motorcycle workshop and restorer located some 30km outside Athens in Nea Makri. 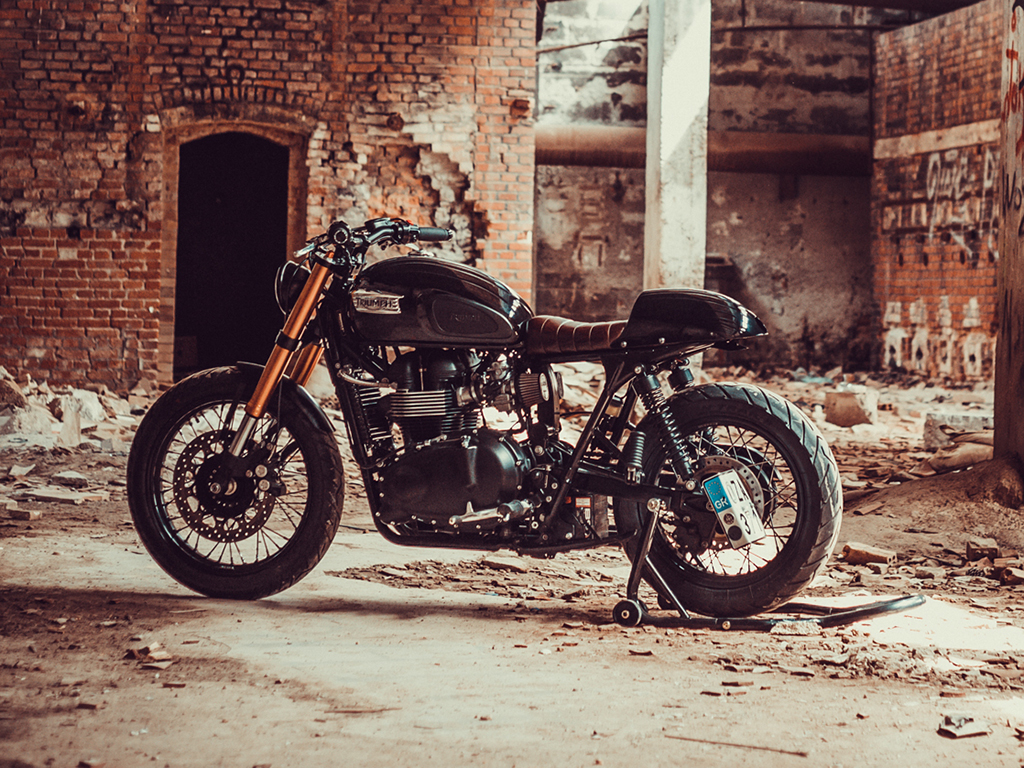 Unlike some, Petros is not a man to cut up a perfectly good classic motorcycle, instead preferring to work with modern retros such as the Triumph Twin, which on this occasion was supplied by the client. 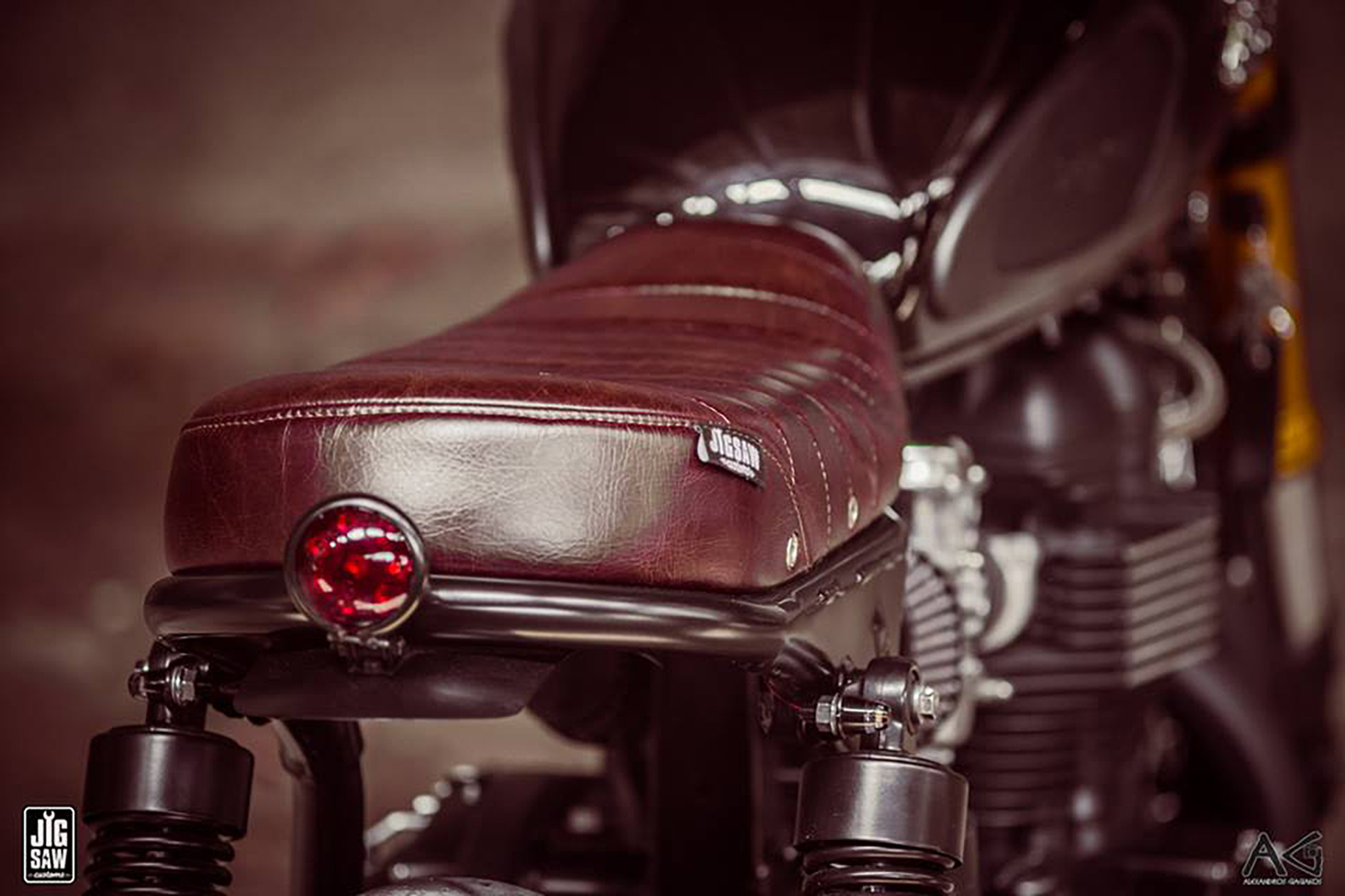 The T100 rolled into the Jigsaw workshop as a daily commuter, fitted with all the usual paraphernalia including a set of leather panniers, in which I imagine was the long list of modifications wanted by its owner, a list which clearly didn’t include panniers. 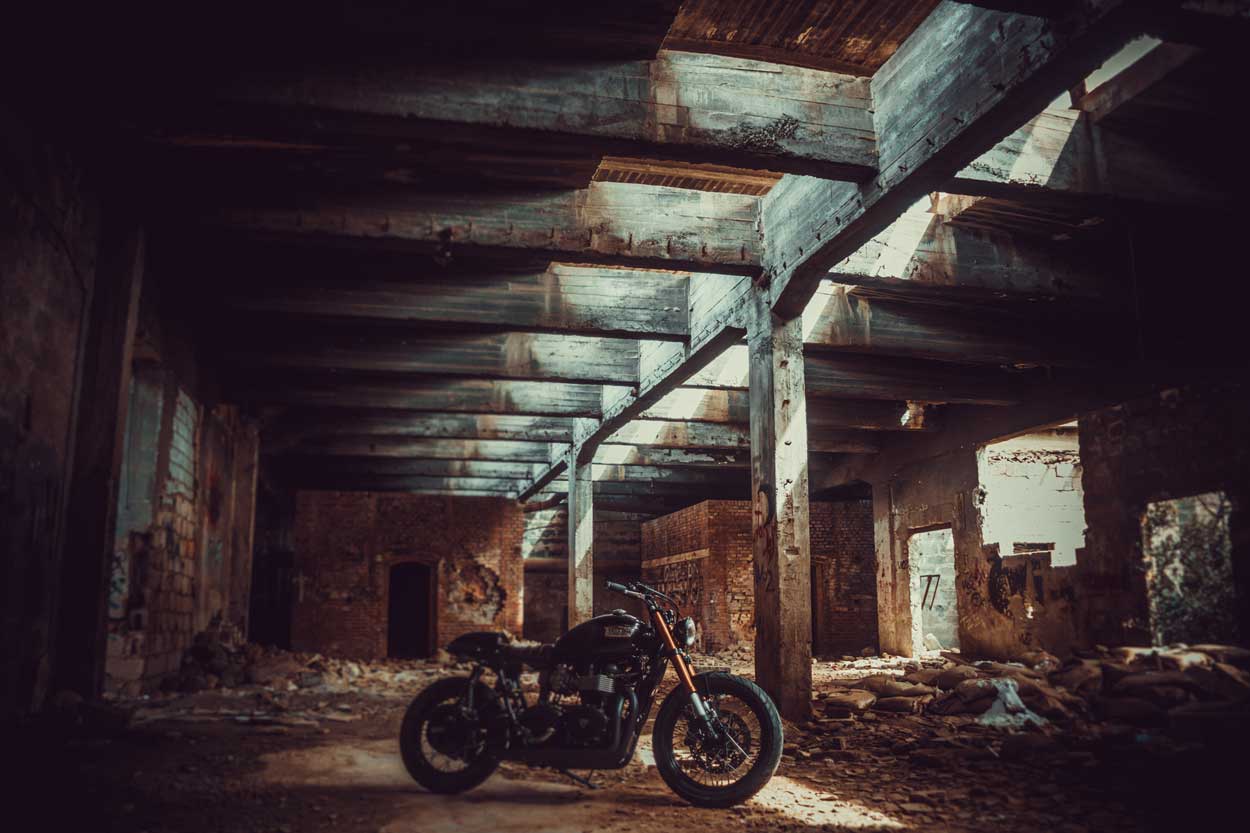 But, after a frame chop and loop, I doubt there would have been room, and they would also defeat the point of having the much sort-after, though tedious to do, see-through frame in which now sits a set of DNA air filters. 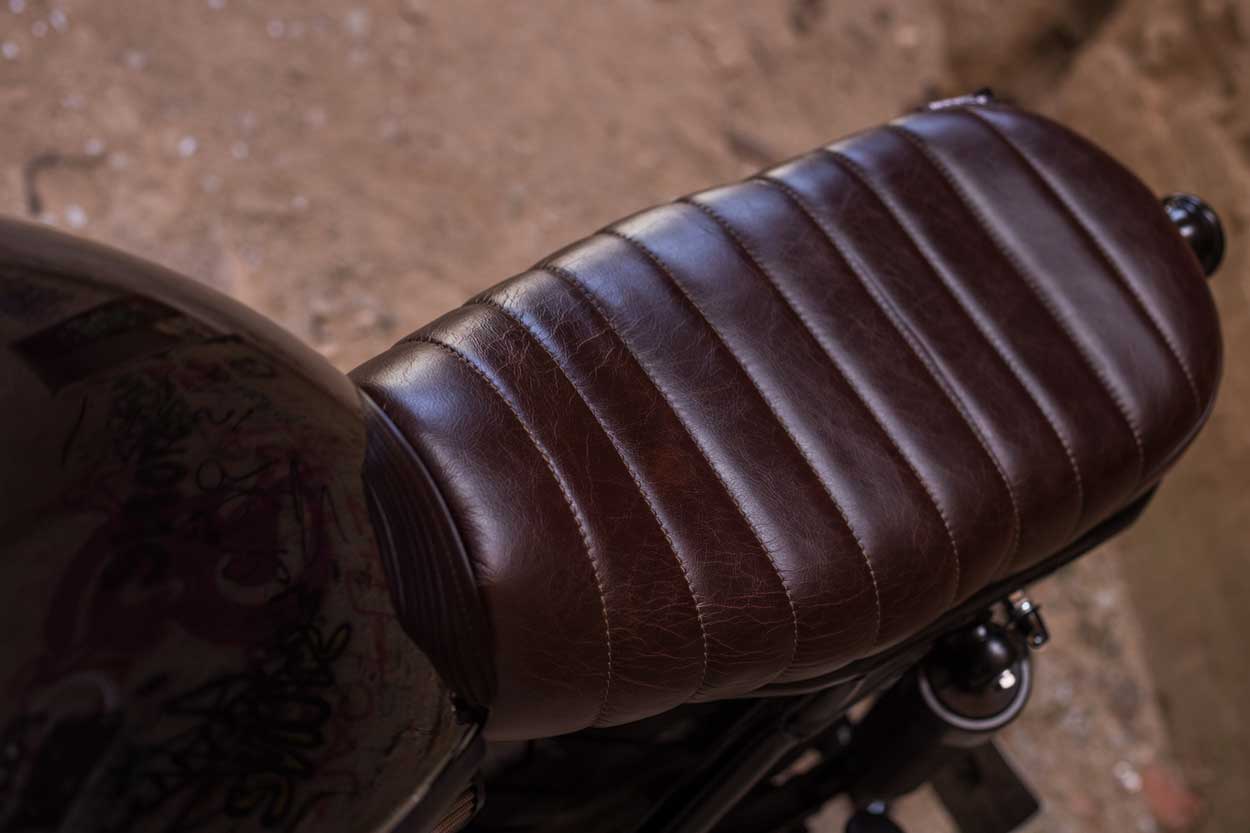 But what of the battery you may ask, well that’s now located behind the engine under the swing-arm pivot.Keeping the battery out of the way has allowed this T100 to be fitted with a slim dual brat-style seat in brown leather, easily converted into a solo Café Racer set-up with the simple addition of a custom seat-cowl. 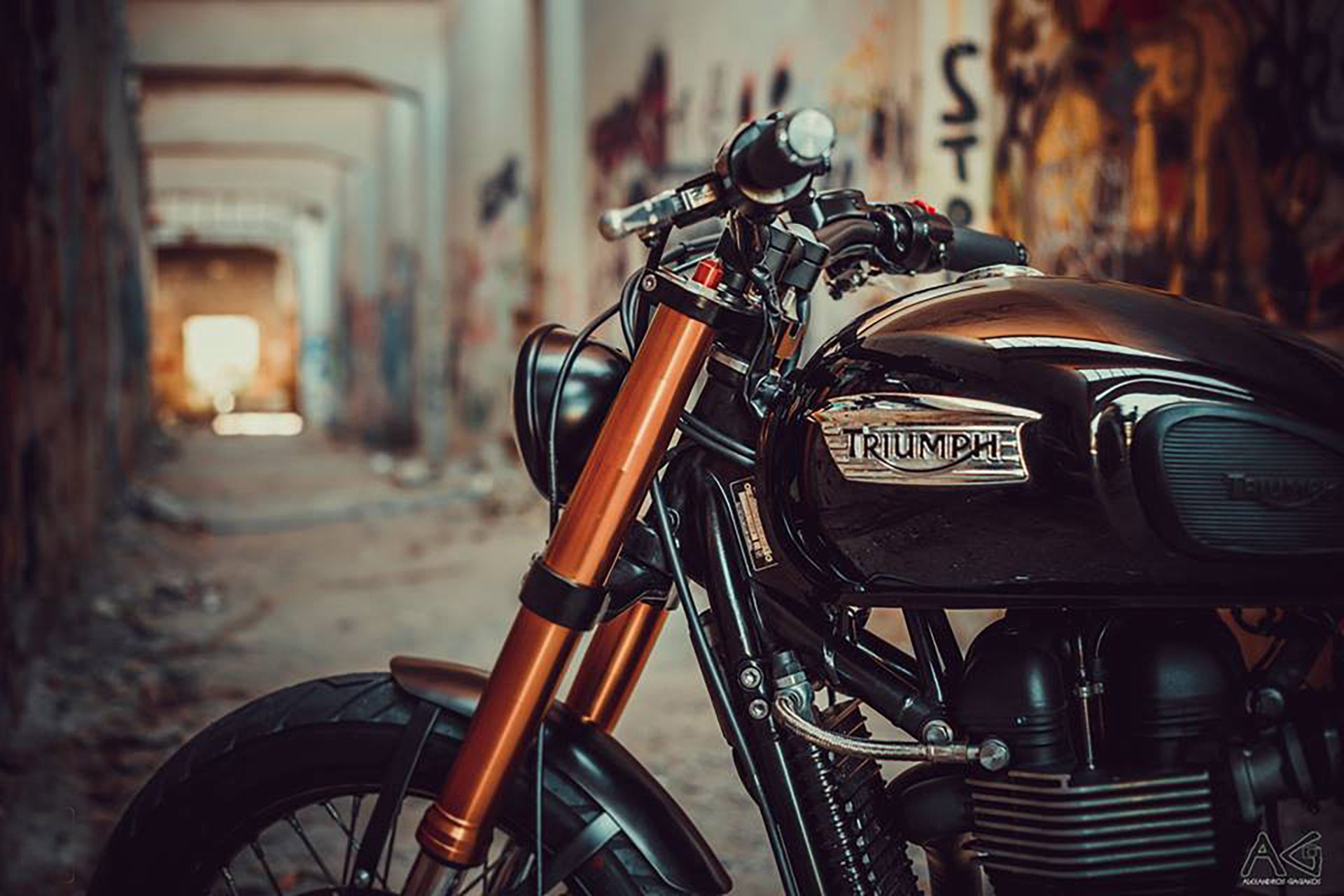 At the front, and looking striking against so much black, is a set of gold USD forks, between which sits a classic black bottom mounted Bates style headlight. 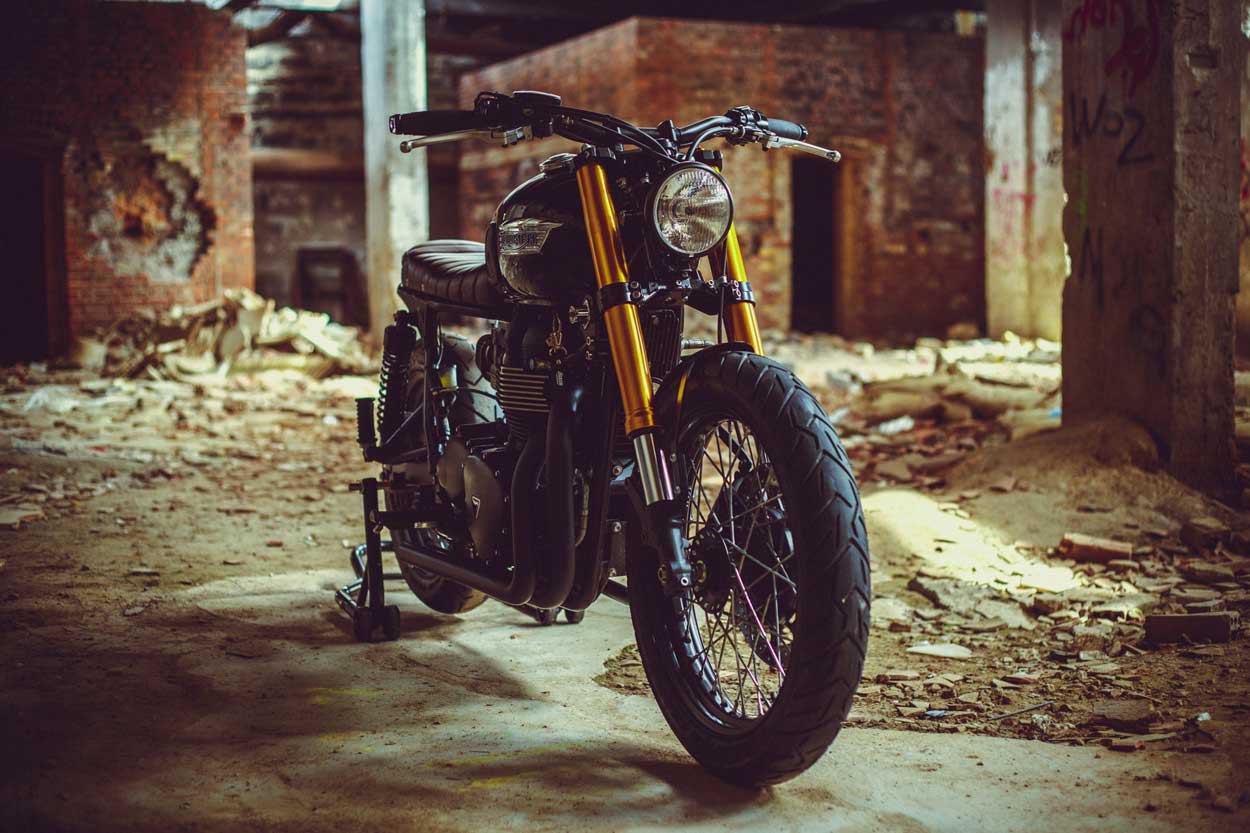 USD upgrades for air-cooled Classic Twins are now widely available, with many companies supplying either full kits of just yokes. These yokes can be fitted with USD forks from a range of compatible motorcycles. An expensive upgrade and some may say a little excessive, but hell who cares when they look this good. 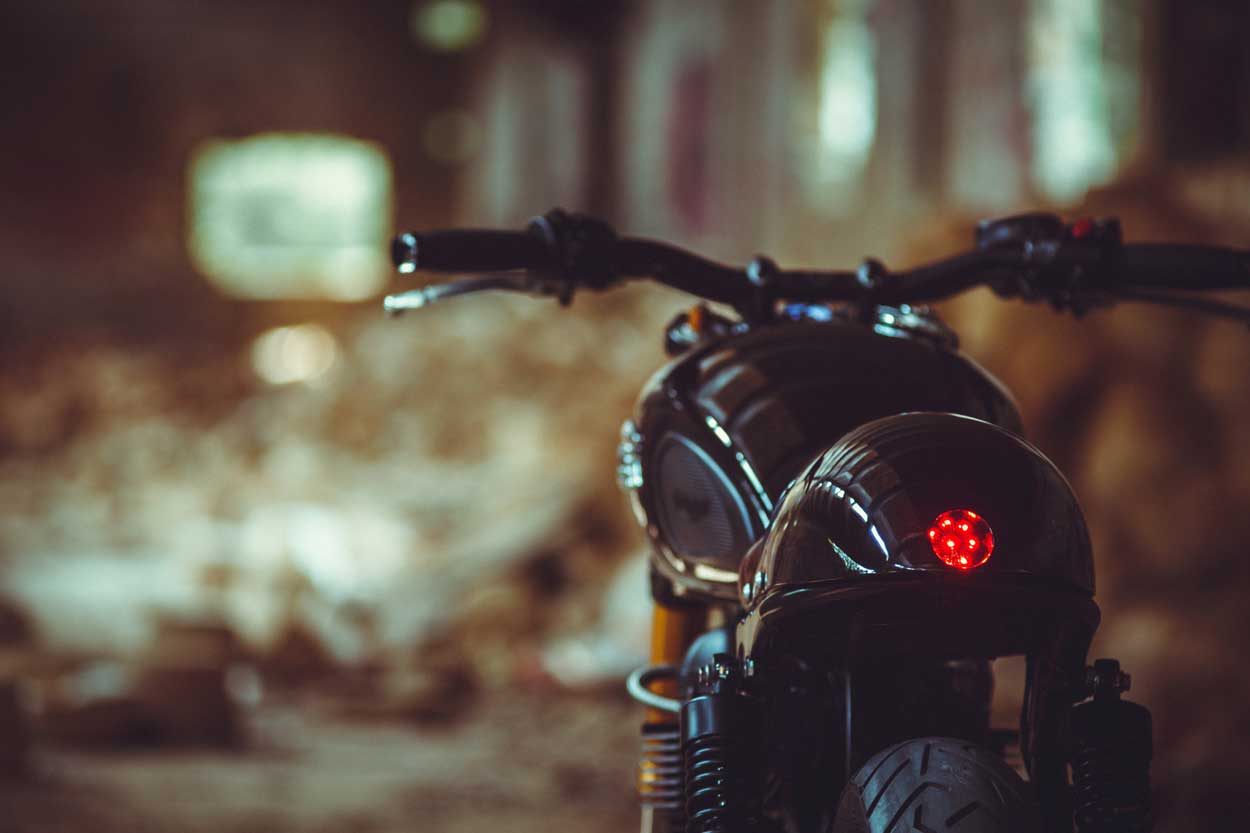 With all the front end upgrades to this Triumph T100, the rectifier and ignitions switch both needed relocating to the usual places using the readily available aftermarket brackets. 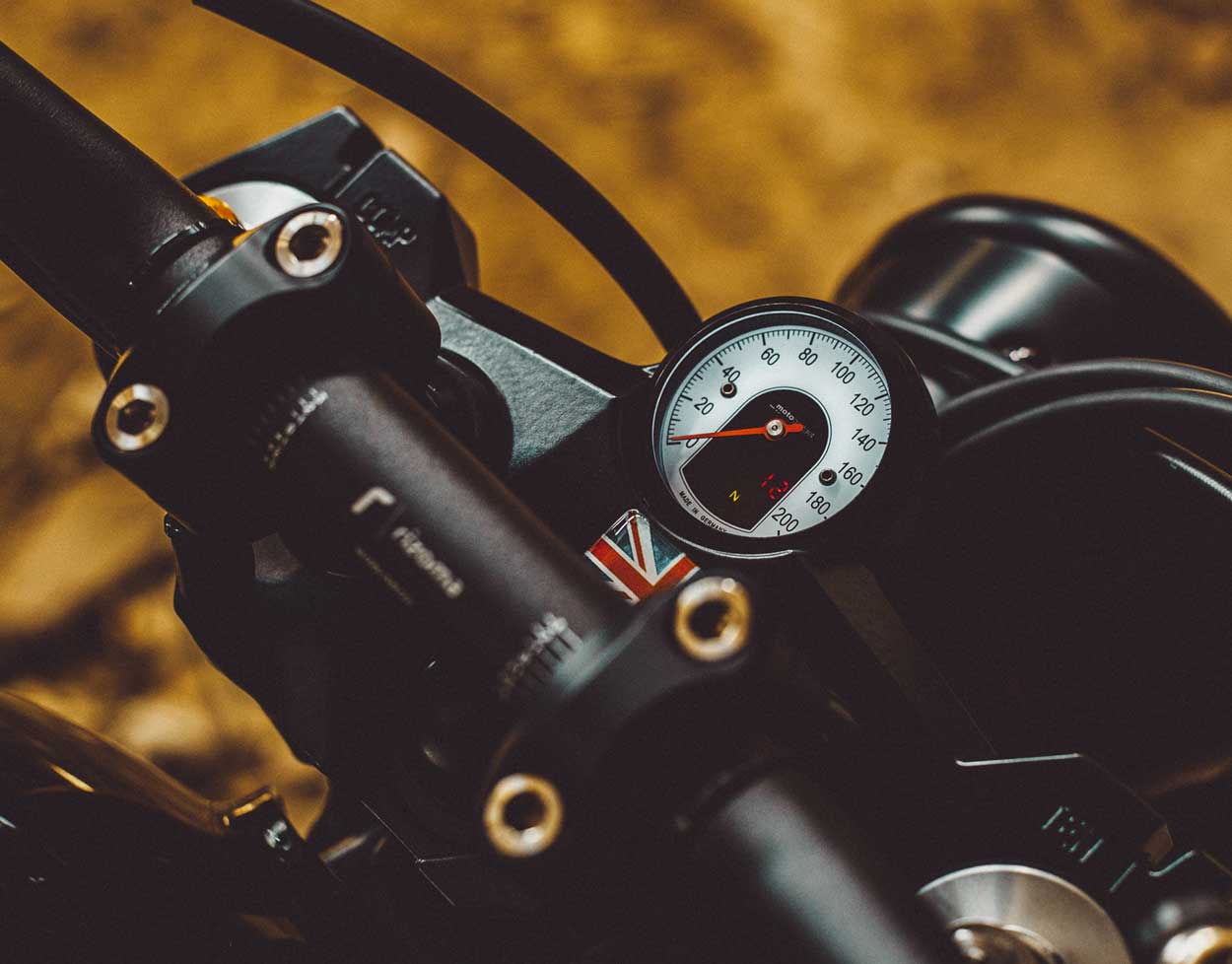 The black handlebars wearing the stock controls and levers and a set of Mototgadget Blaze bar-end turn signals are from Rizoma. With Motogadget also supplying the rear micro turn-signals and the ever popular Tiny digital speedo, wired into this CAN bus Triumph Twin via their brilliant m-tri adapter. 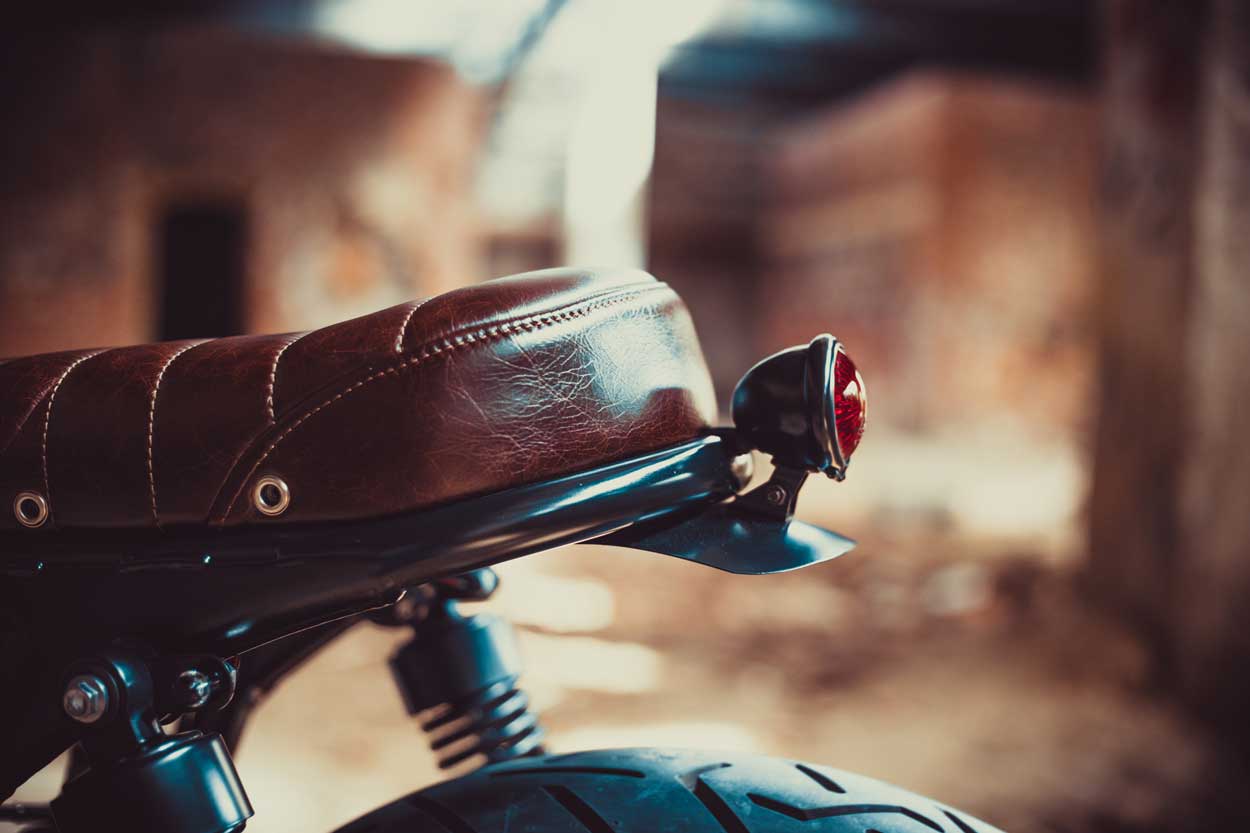 Protecting the rider from the muck and grime the stock T100 wheels now wrapped in Pirelli Scorpion Trail tyres throw up, are a pair of black custom and handmade front and rear mudguards. The rear may not protect the rider from much, but its somewhere at least to mount a small Bates style mini LED stop/tail light, but that’s about all. Which meant the numberplate found itself a new home, mounted on the left-hand side of the swing-arm. 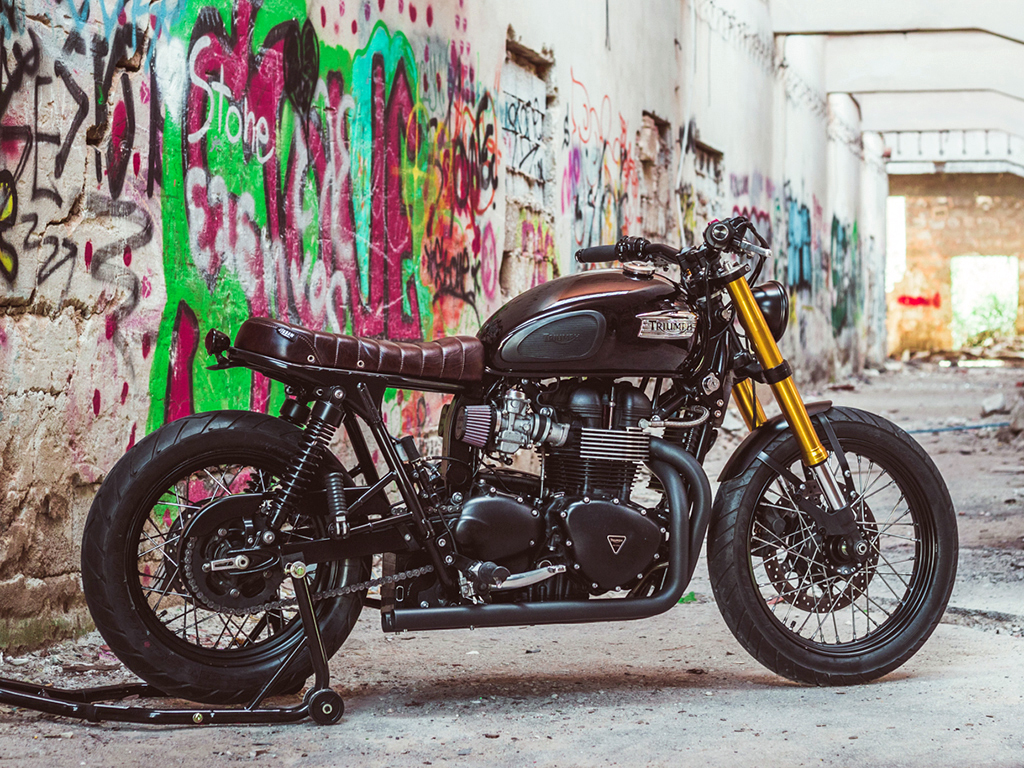 Venting out onto the right-hand side, and finishing this custom 2012 Triumph T100 off, is an all black, two into two, custom made exhausts system. An Exhaust which will give this super slick Cafe Commuter its voice, and attitude – and I imagine, plenty of attention! 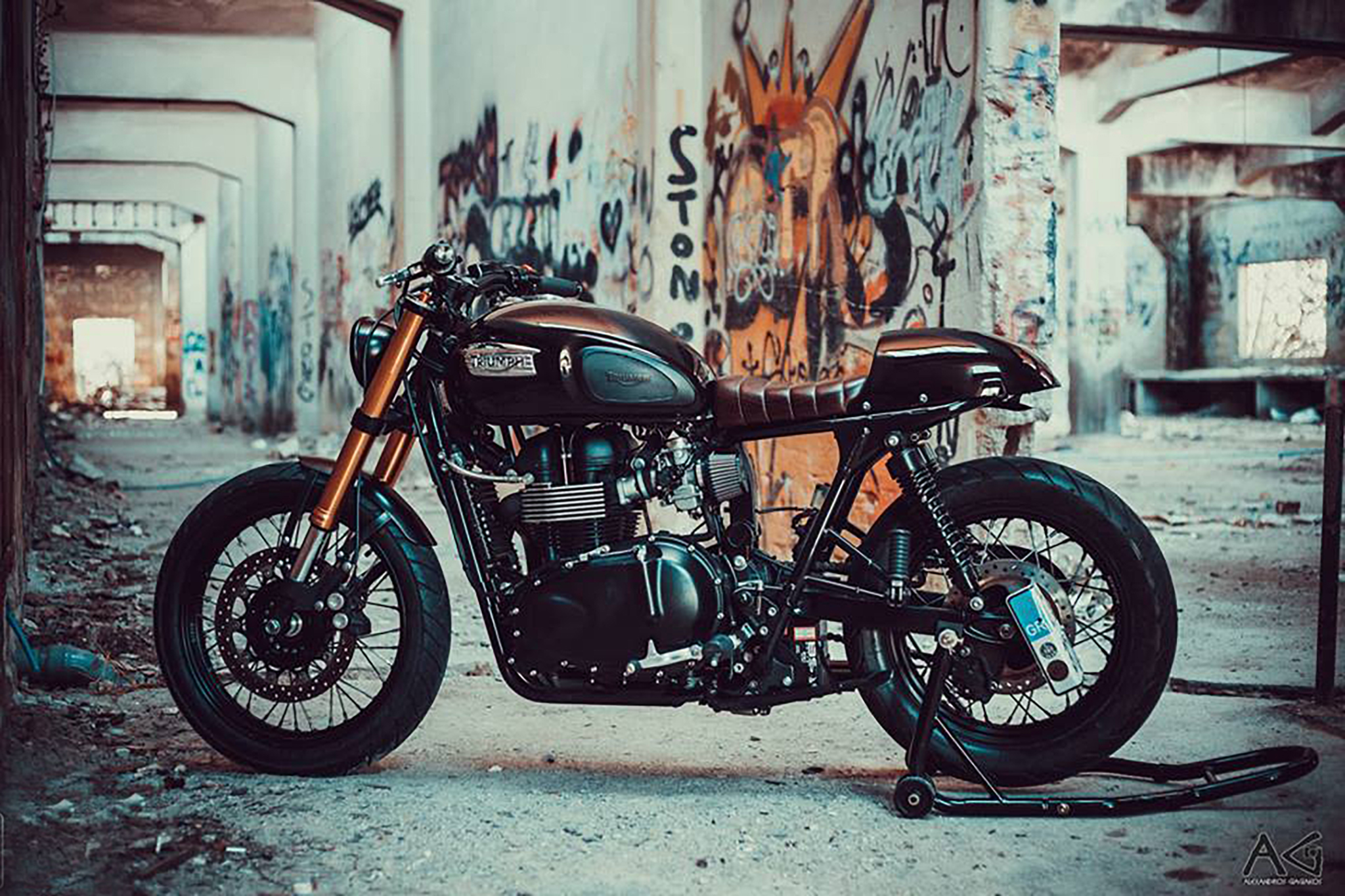