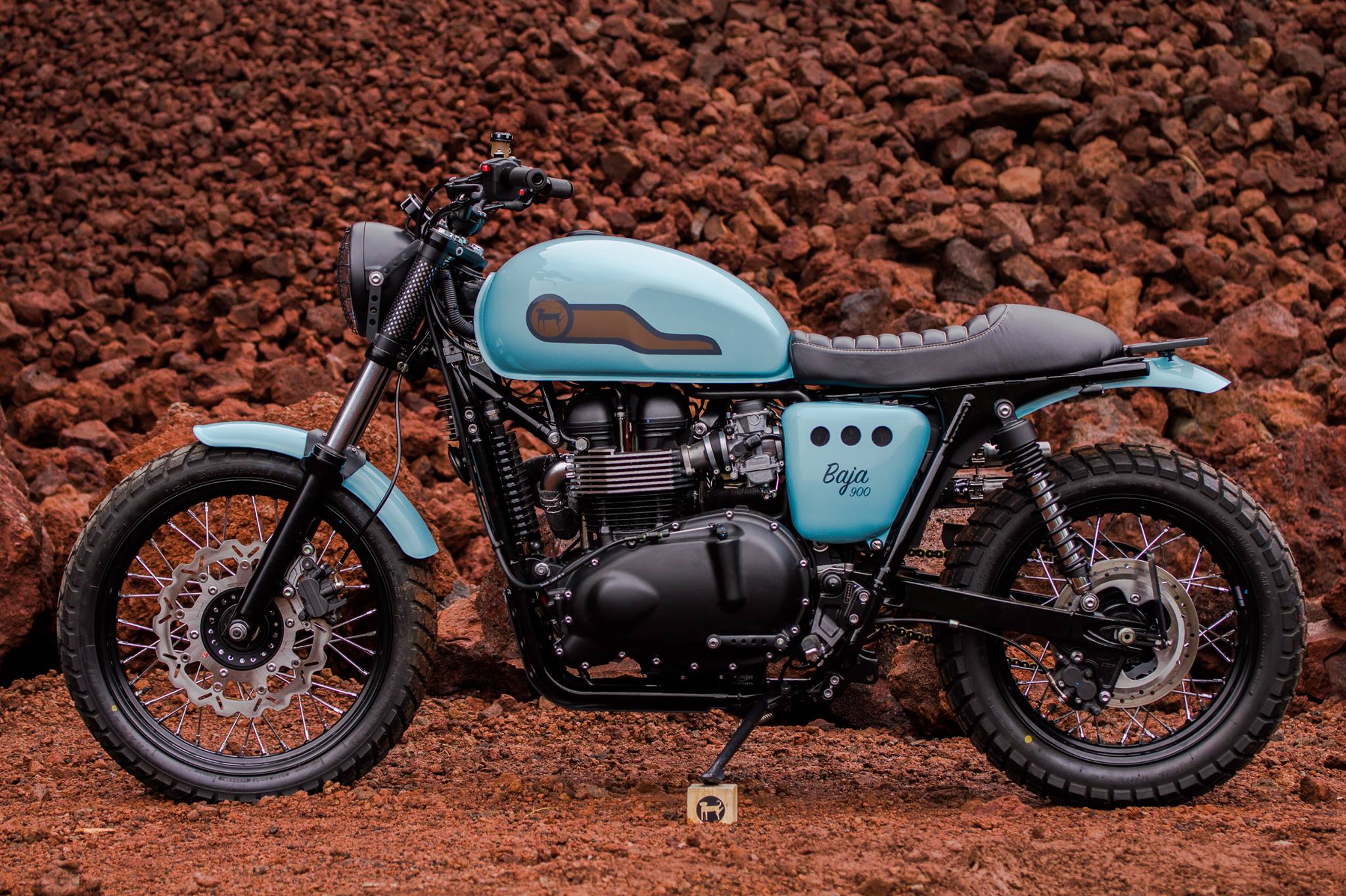 The Scrambler style has been popular within the ‘New Wave’ custom motorcycle scene for over half a decade, and there is no sign that these rugged, and knobbly tired machines becoming unpopular anytime soon. Triumph played a big part in the styles future success when they released the Scrambler in 2006 – a bike which was the perfect addition to the British companies retro classic line up. 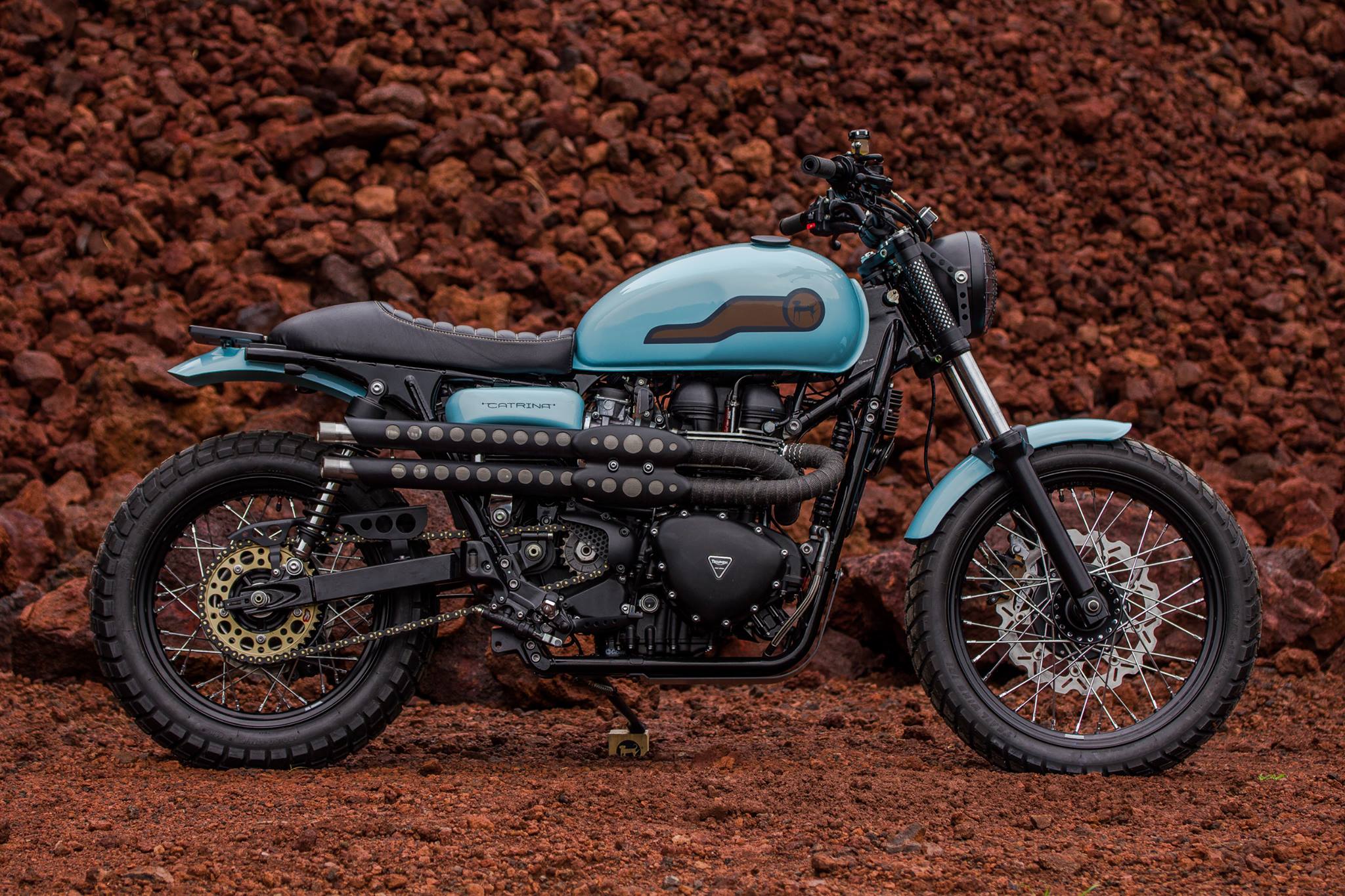 The Scrambler was “…a redefinition of the bikes made famous by 50’s thrill-seekers such as Steve McQueen, into a contemporary urban context. A ‘do anything, go anywhere’ kind of bike” *. Perhaps it’s this ‘go anywhere’ attitude that made the Scrambler style so popular. 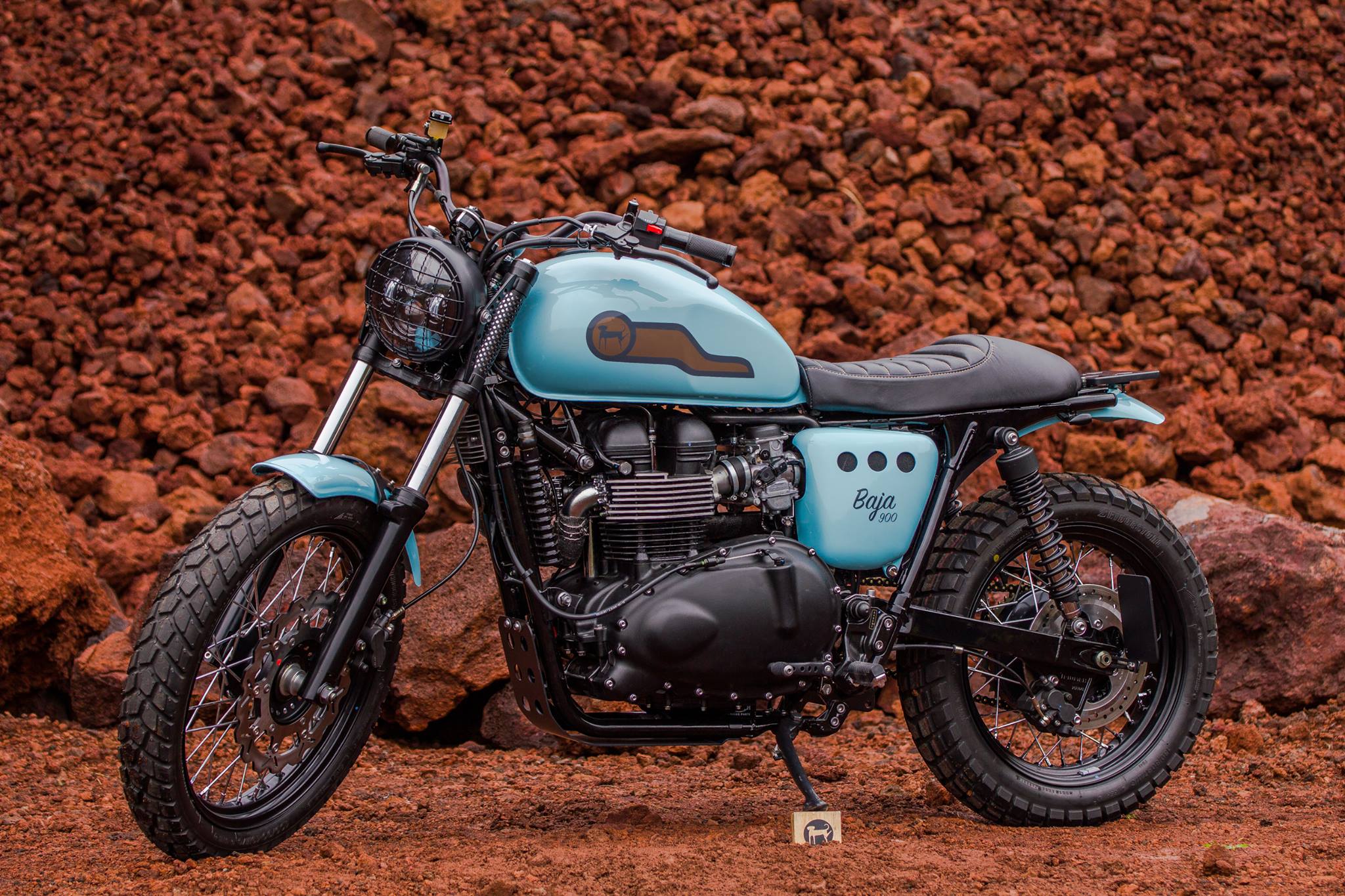 The 865cc Triumph Scrambler was marketed as a modern retro homage to the TR6 McQueen raced in the 1964  International Six Day Trial – but it was the Triumph’s ridden by McQueen in the deserts of Southern California and Mexico that were to inspire many.

It was good friend to McQueen, Bud Ekins, Steve’s local Triumph specialist, sponsored rider and friend who was to get Steve into desert racing, and it was Bud who was to become the forefather to one of the most famous Desert Races, the Baja 1000, a race which lends the featured custom Triumph Twin it’s name. 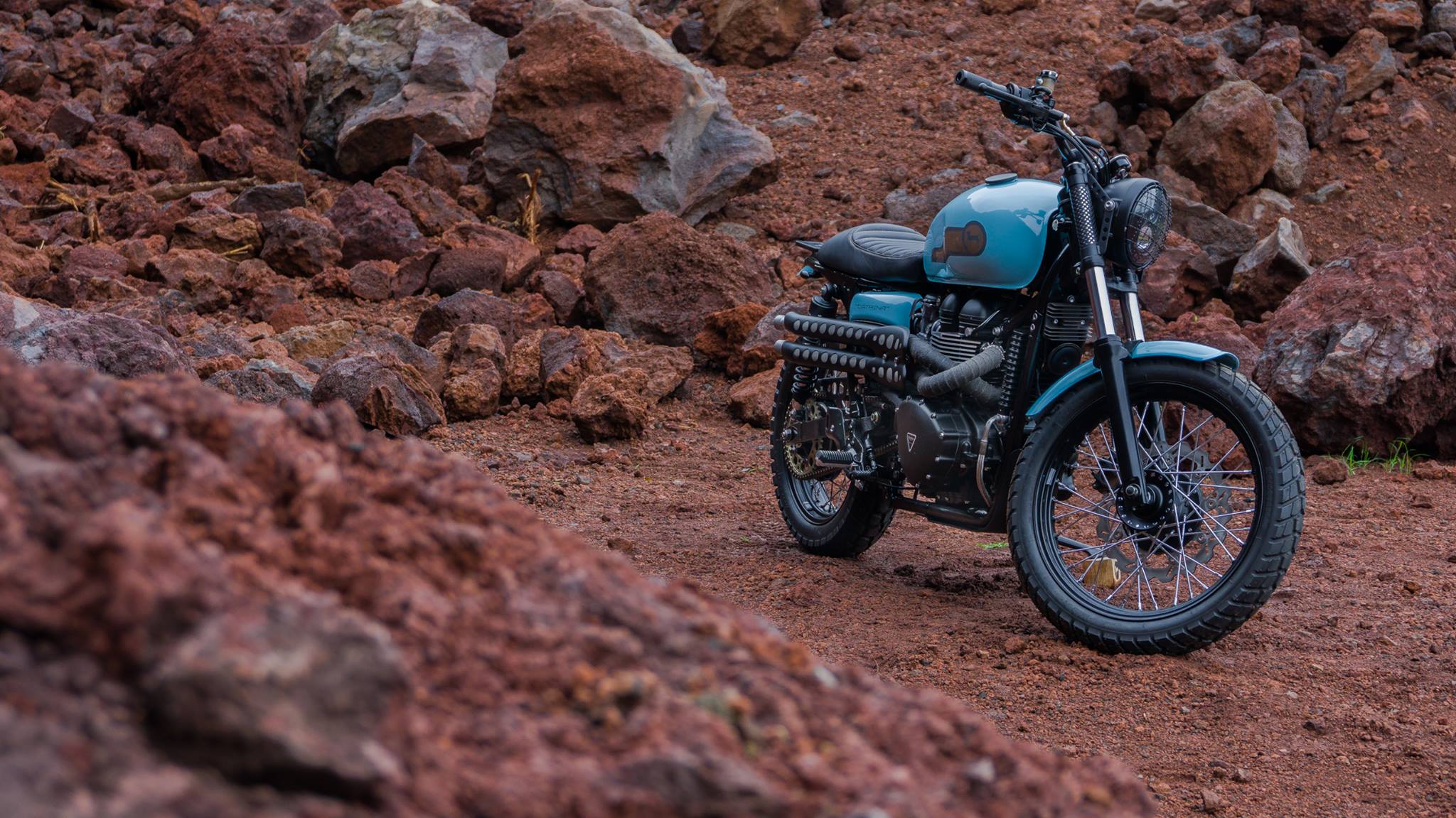 As it turns out, the Baja 1000 was on average a 900 mile race, which is perfect, as the donor is one of the last air-cooled Triumph Scrambler 900’s. Added to that, it was built by Catrina Motosurf, who are based in Guadalajara, Mexico! 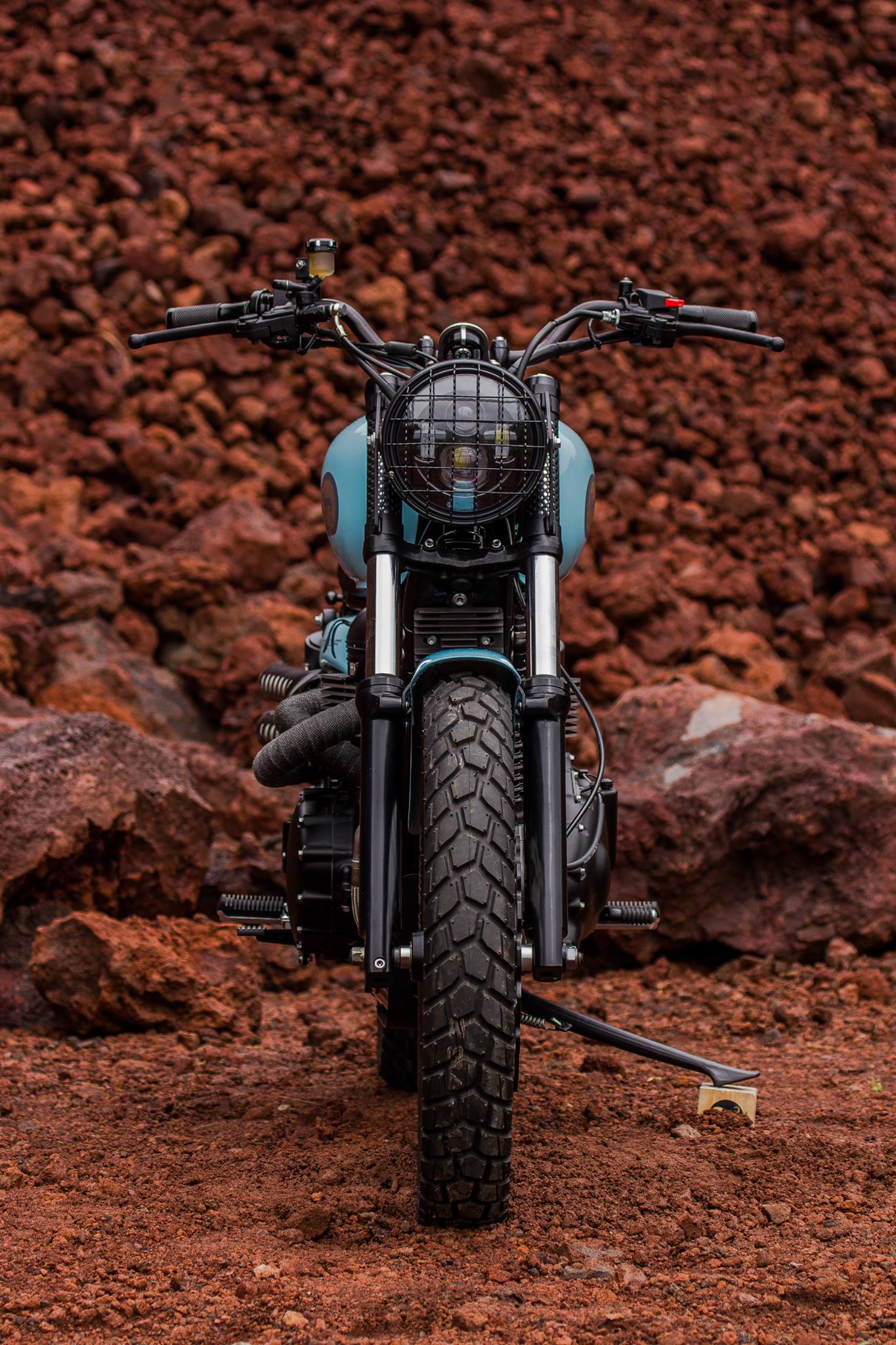 The Baja900 like many custom twins has been chopped, though not looped, with the rear peg mounts finding themselves in the same skip as the last few inches of the frame, making this Desert Sled a pillion free zone – perfect for finding one-self in the desert. 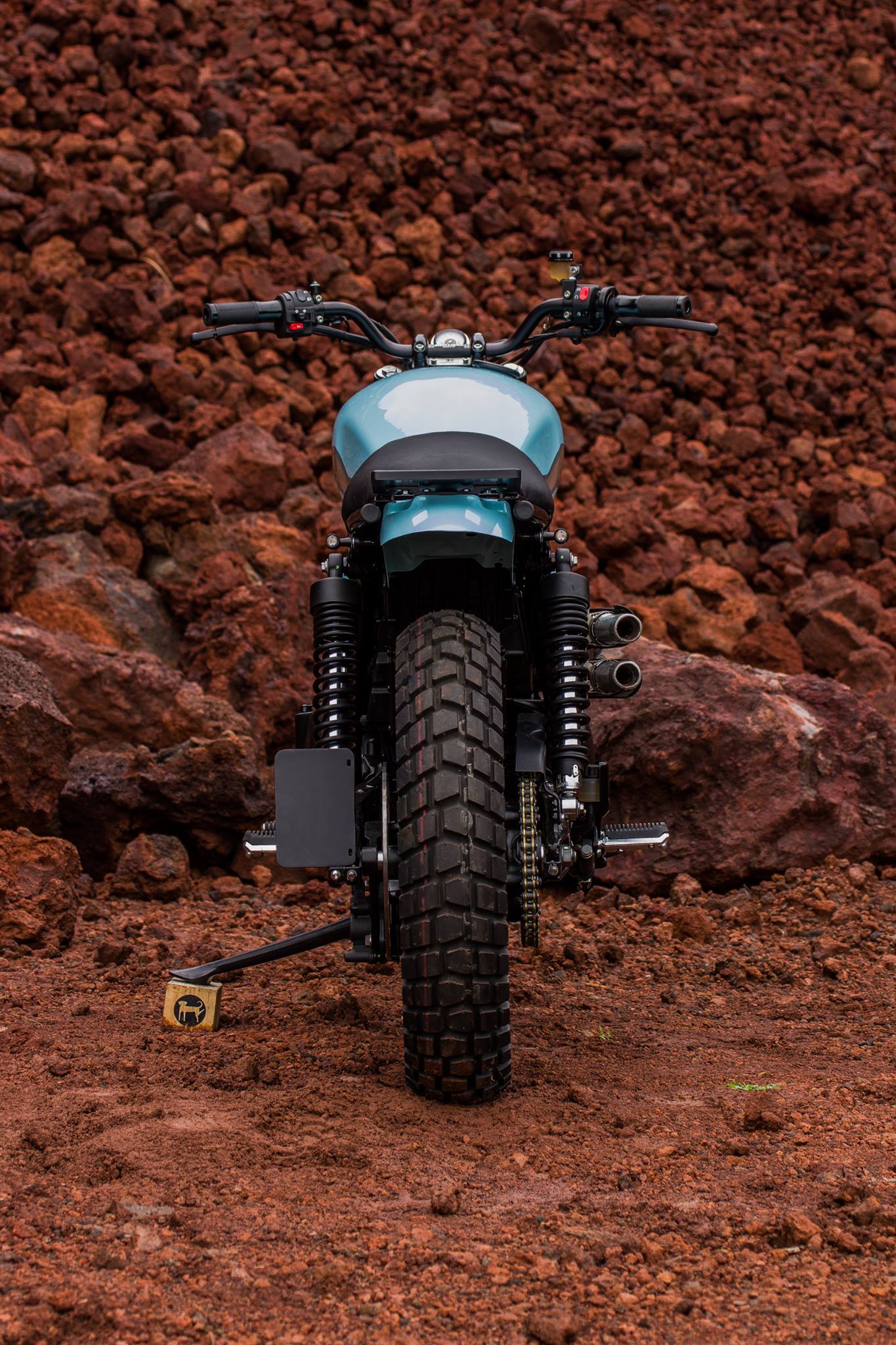 The stock rear mudguard has been retained, though shaved to make it more attractive. If you look closely, you can see the mudguards now exposed mounting holes are securing a custom luggage rack, machined from aluminium. The seat-base is of course custom-made, and topped off with shaped foam before being upholstered in black leather.  To keep things clean at the back end, and not to ruin the lines of the modified mudguard, a set of Rizoma Club S LED turn signals have been fitted either side, and double up as Turn Signals and Stop and a Tail light. 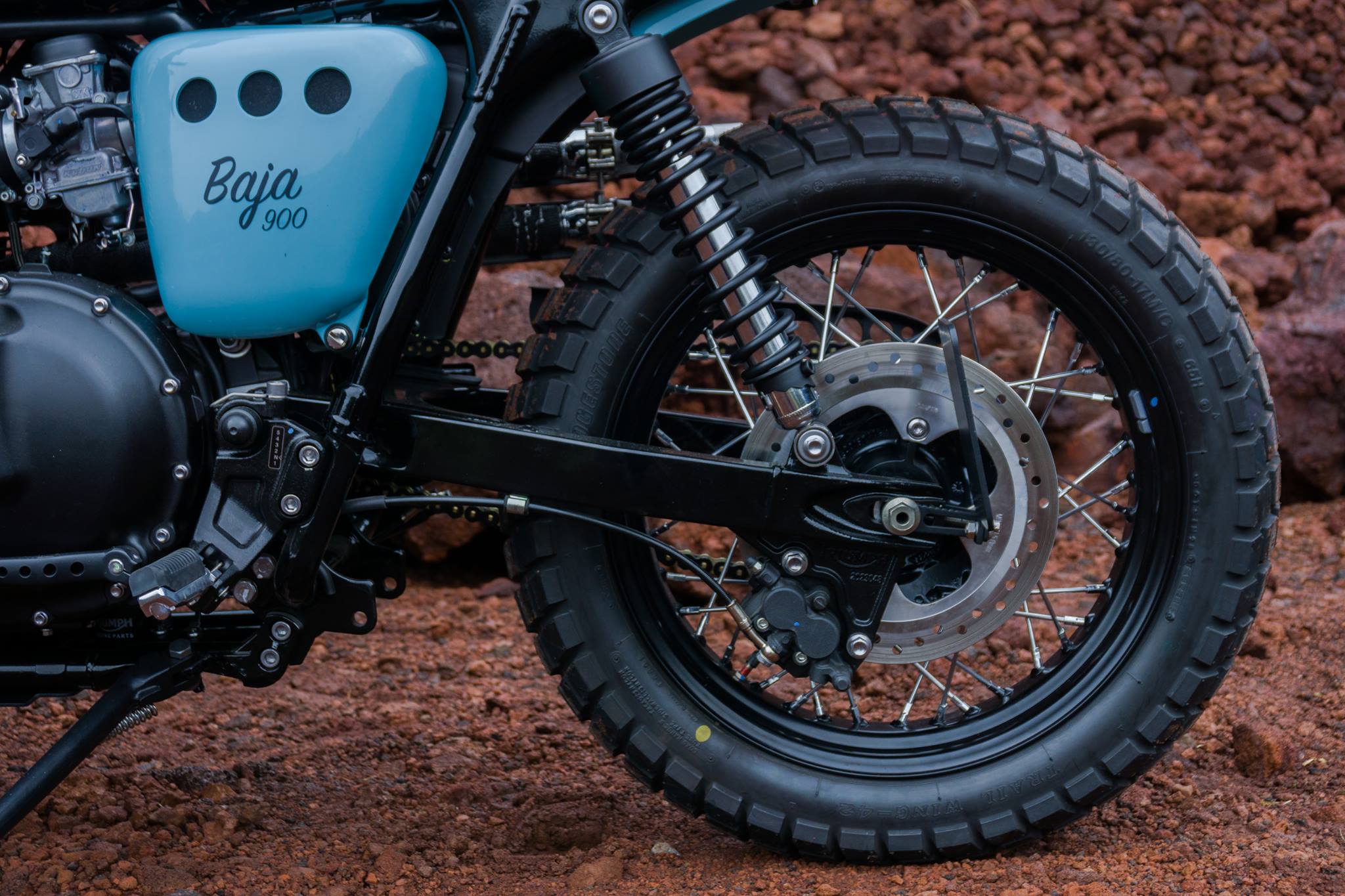 At the front, the turn signals have been relocated to under a new JW Speaker headlight lenses, fitted into the stock bowl, attached to the Triumph using custom made brackets – with the new headlight receiving a stainless mesh guard to give it a little protection from what the new front mudguard, now located under the mounting bracket, fails to intercept. With the fitting of the custom headlight brackets the now homeless ignition switch has been relocated to under the right side of the tank, with the rectifier finding its way to the front of the frame. 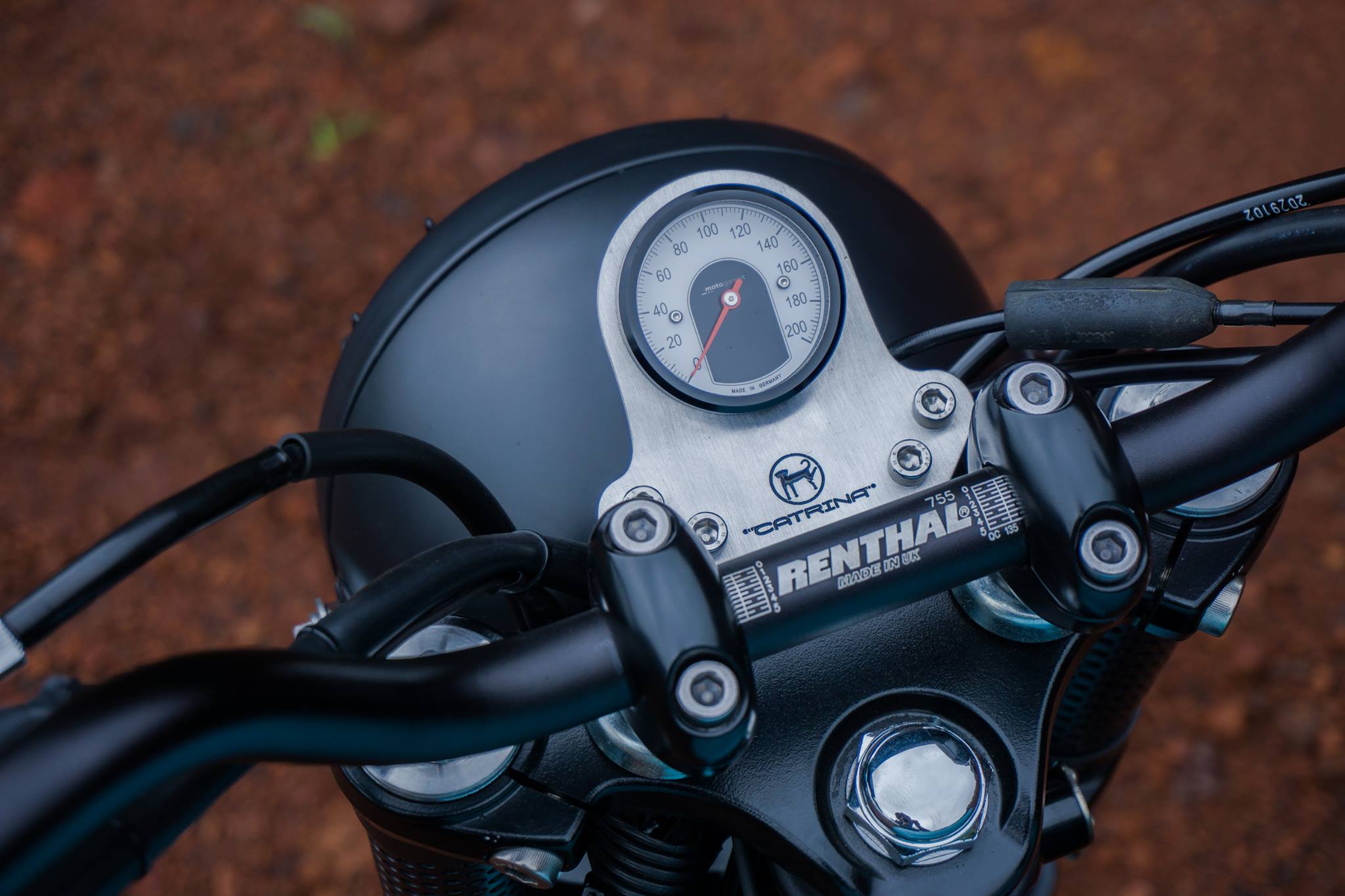 The Bars are now the lighter Renthal’s refitted with OEM switches – with the levers being powder-coated black before being reattached. The sample-cup brake reservoir bowl is gone, replaced with a smaller item. The new bars now overlook the ever popular Motogadget Tiny speedo fitted to the Scrambler using the Motogadget CANbus adapter and a custom made bracket  honed from aluminium. 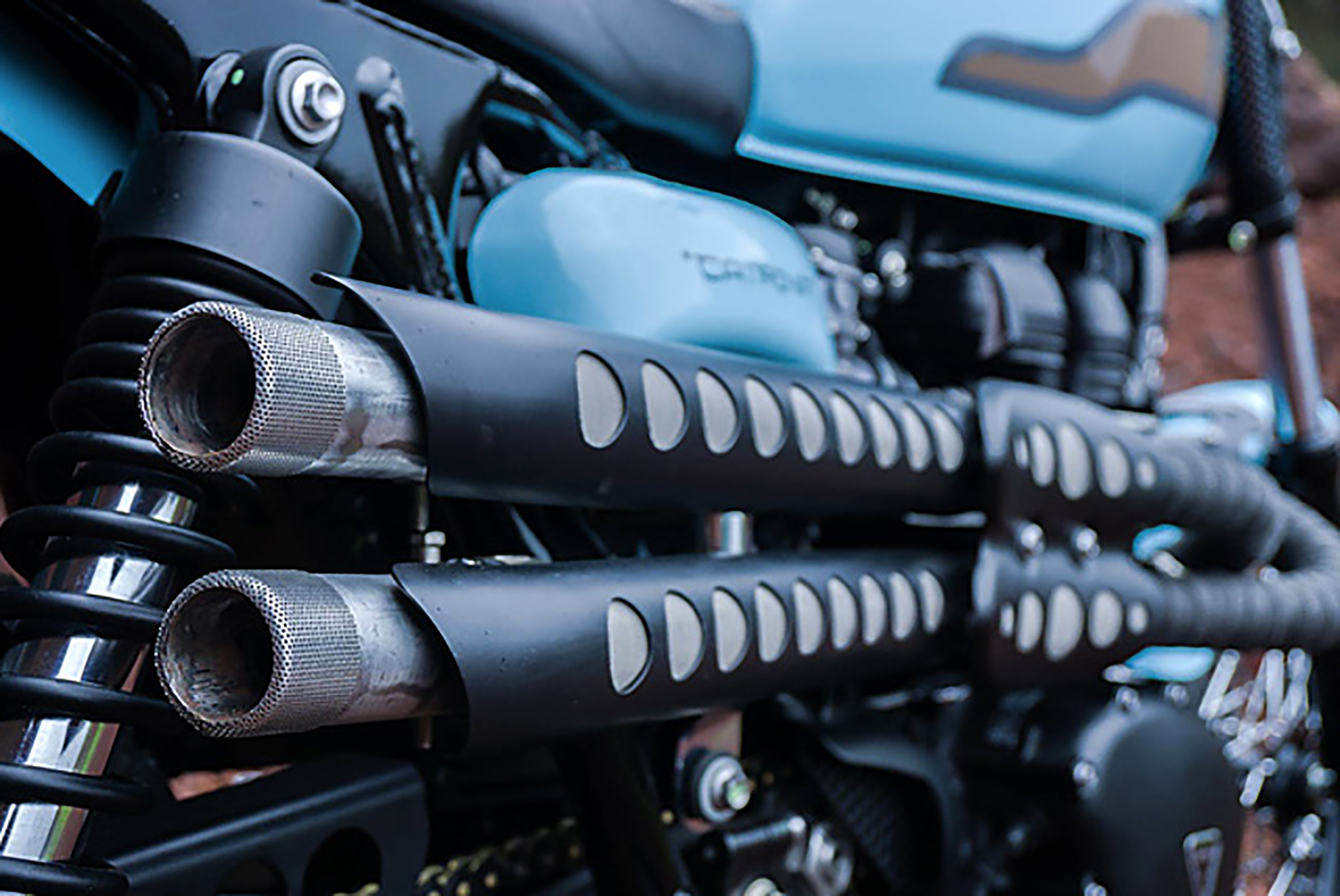 If you have ever held the stock Scrambler pipes, you will know just how heavy they are, and should be the first things to be replaced. But, no Desert Sled or Scrambler should be without a set of high-pipes! – lows exhausts just make it look like a Bonneville, which is fine, but this is no copy, but the 270º cranked real deal.  With this in mind, the stock pipes have been replaced with a set of custom shot-gun style exhausts, fitted with the original heats shields, and drilled to save weight, with the pipes then being heat wrapped. 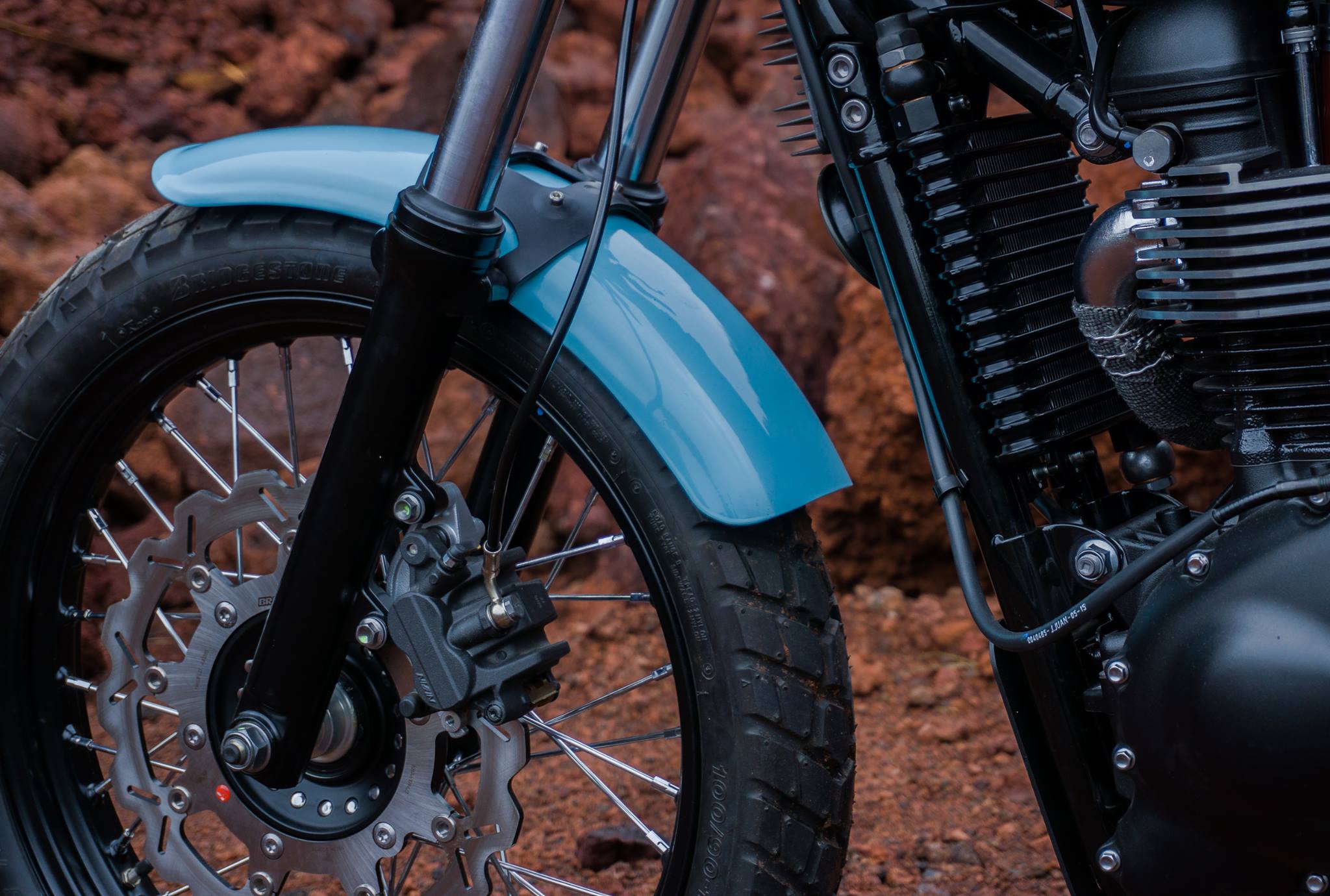 The brake and gear pedals, along with the stock sprocket cover and chain guard have all been shaved or drilled so save some weight, and then black power coated, with the lightened covers now covering a new Rental chain and rear Sprocket in contrasting anodised gold – the total weight saving I’m told ads up to 20 kilos. 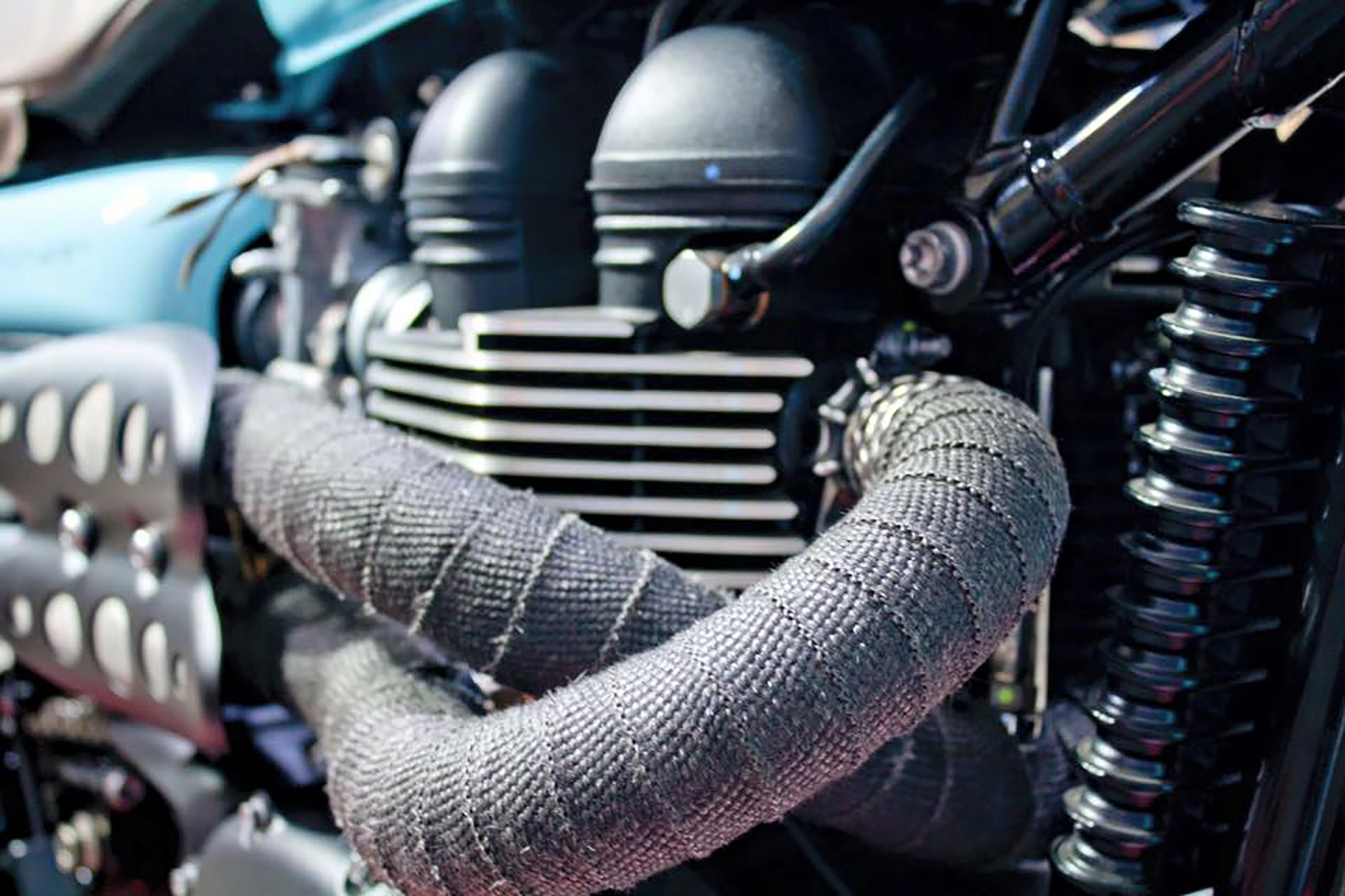 This Scrambler, much like the 2005 Bonneville T100 I put together last year, has been painted Mini Cooper, Surf Blue, a colour which makes a change from black, and will look stunning against an arid desert background.

The pics by Manu Aldana @tedemaquin
*Quote taken from TTP