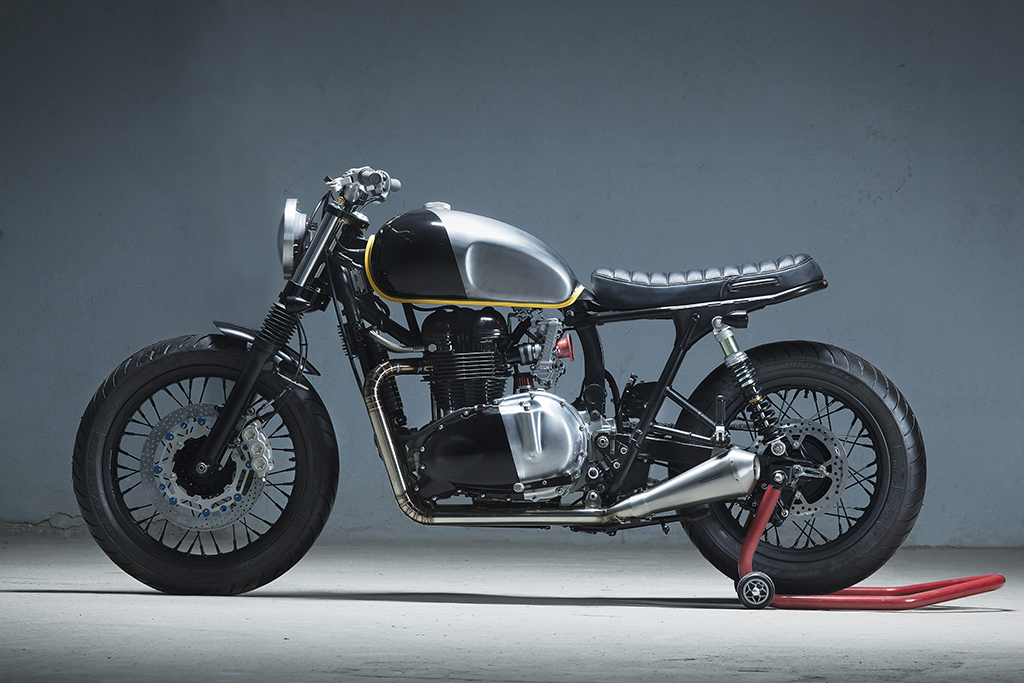 There are but a handful of bike builders worldwide, who’s names are synonymous with well crafted and inspiring custom Hinckley Triumph Twins. Finding one of these builders trading in your local industrial estate is unlikely. Therefore, if you are not undertaking the work yourself, you will need to ship it to somebody who will. For Steve, this involved transporting his Triumph Twin 1300 miles from his home in Scotland to Barcelona Spain. 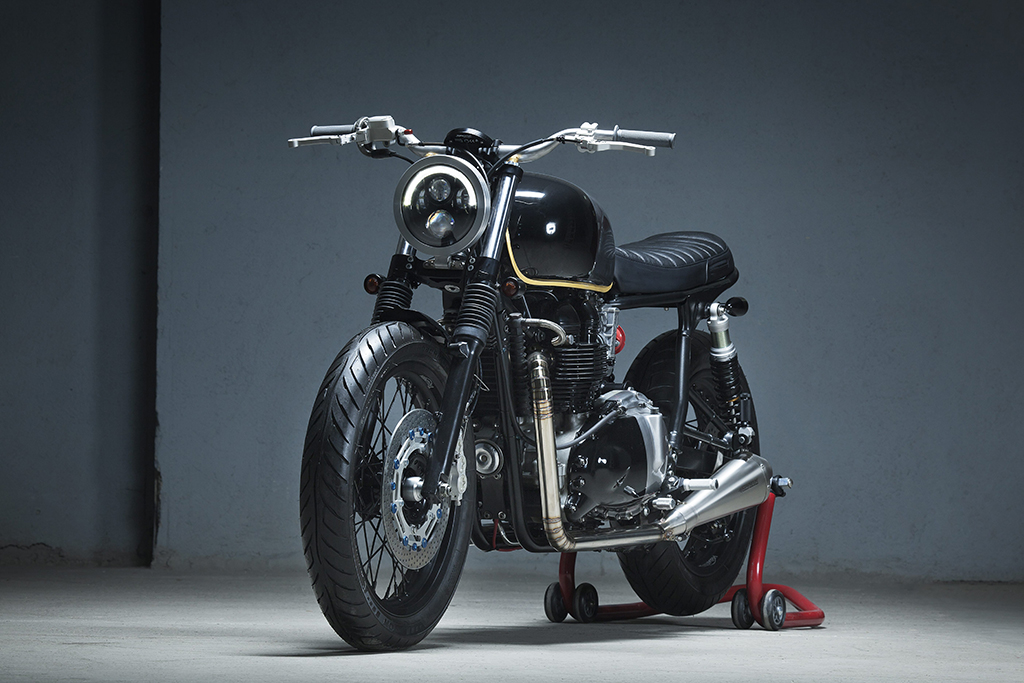 There was a good reason Steve sent his 2004 T100 halfway across Europe, and that was the Bruno!, a custom Triumph based on a 2005 Thruxton the Kiddo Motors team put together in 2012. Though the ‘Bruno’ is a four year old build, it’s stripped down look is still current, and still capable of being the centre peace at a popular London custom motorcycle show. 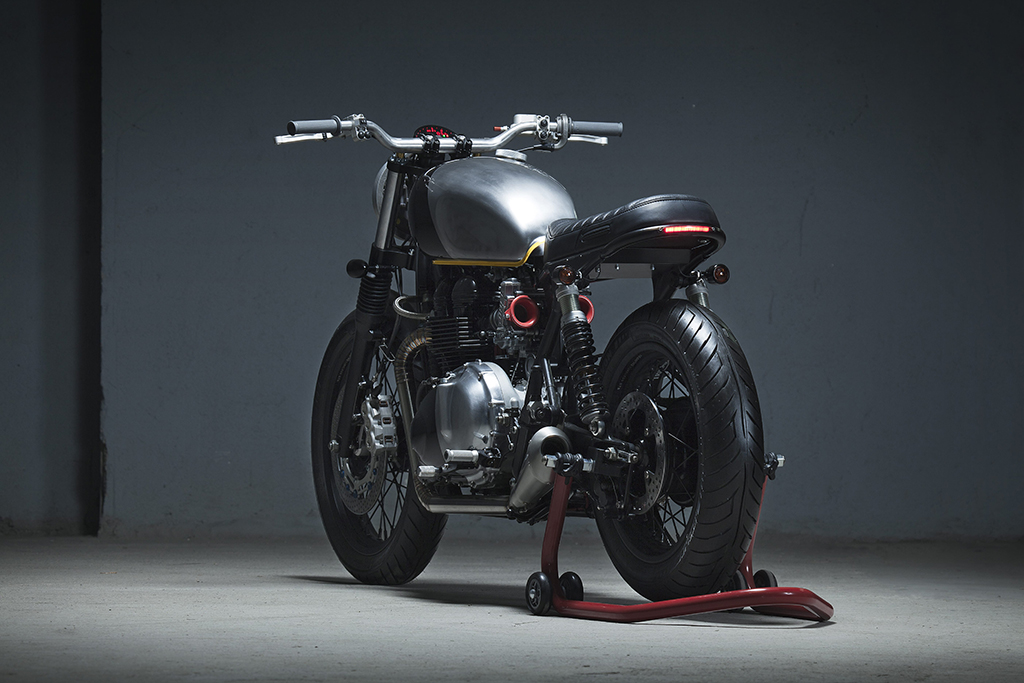 It was now down to Sergio Armet, Christoffer Märtensson and Juanjo Jimenez, the names behind Kiddo Motors to take Steve’s ideas and combine them with a huge serving of Kiddo Motors style. 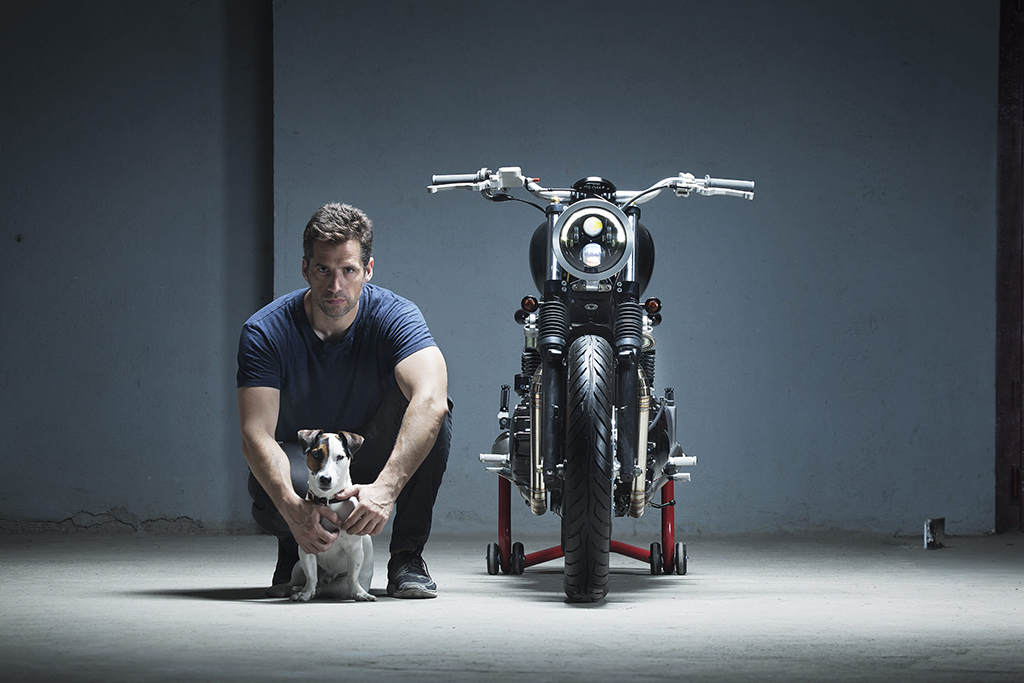 Steve’s T100 was to follow the same blueprint as the Bruno, being chopped, looped with the air/battery box being removed to give this Triumph a see through frame. Not a task for the faint-hearted, considering this area contains much of the Twins electrics, all of which will need relocating. 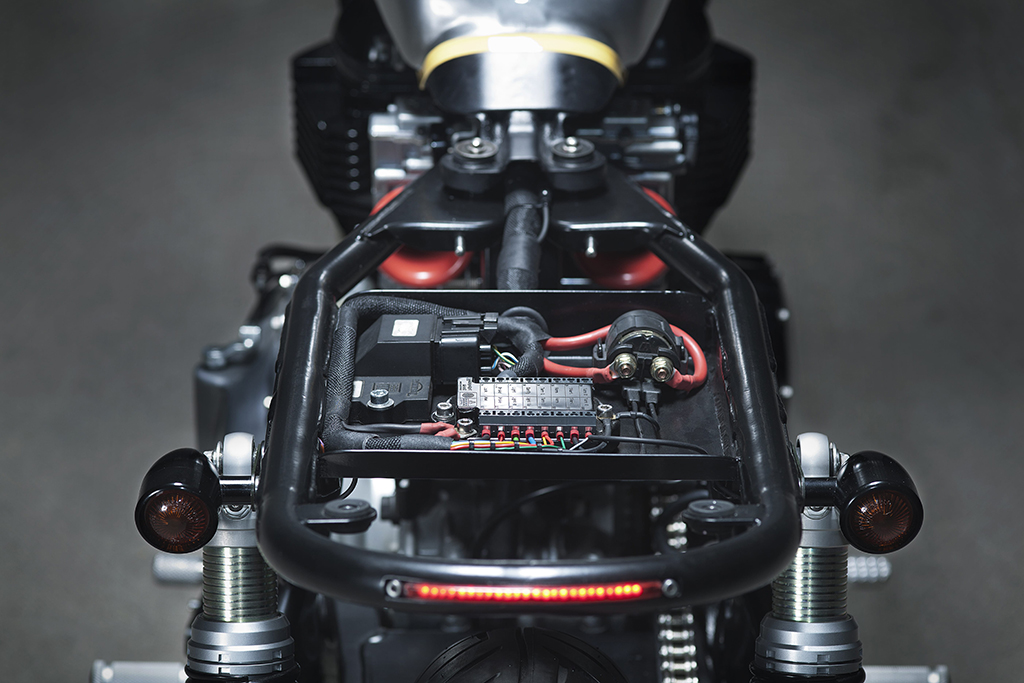 Under the seat is the best option, but its tight – to overcome this lack of space, the frame cross section was modified to give the ignitor and relocated solenoid the room they needed, and  allowing the fitting of a Motogadget m-Unit, through which now runs most of the bikes electronics, including an m-Lock keyless ignition system.

With the removal of the air box, the battery needed to be relocated, but the stock item being so large, it’s difficult to hide, so it was replaced by a compact Antigravity lithium battery, and relocated to under the swing-arm. 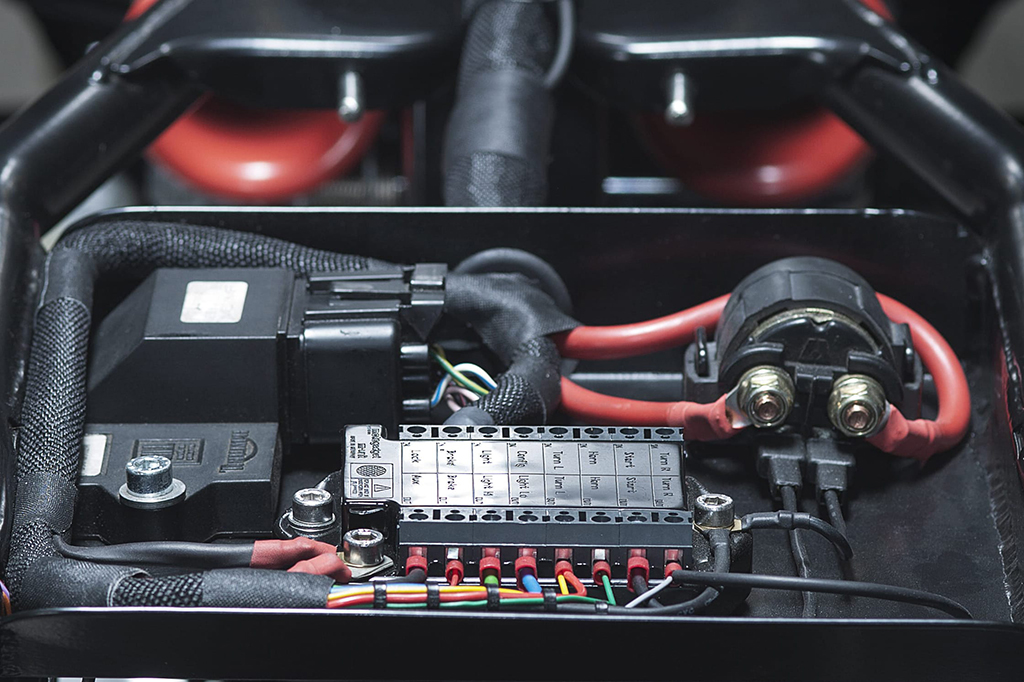 The under seat frame modification doubles up as the T100’s fender eliminator, with the new loop housing an in-frame LED tail/brake light – with the amount of detailed electrical work this T100 has undergone, its a shame to cover it up, but sitting on this Bonneville wouldn’t be as comfortable as a custom seat, upholstered in leather with a handy little pocket. 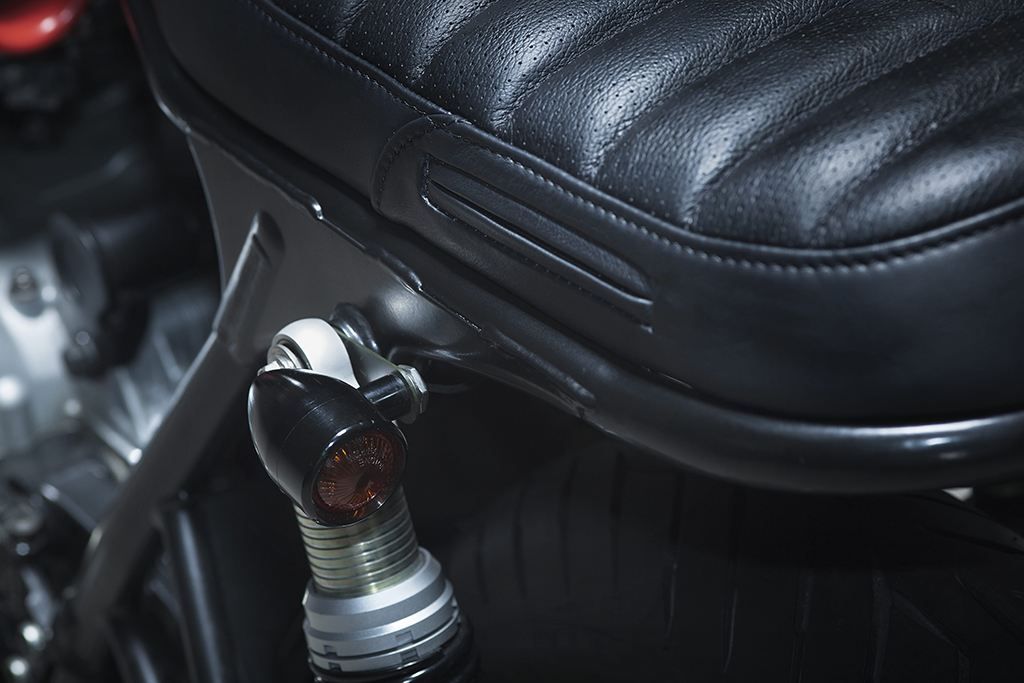 In each corner are Motone’s billet turn signals, with the front being attached to the forks using Motone’s Wrap-Around Clamps, above these is a LED JW Speaker headlight with custom bezel, held in place by a custom bracket. 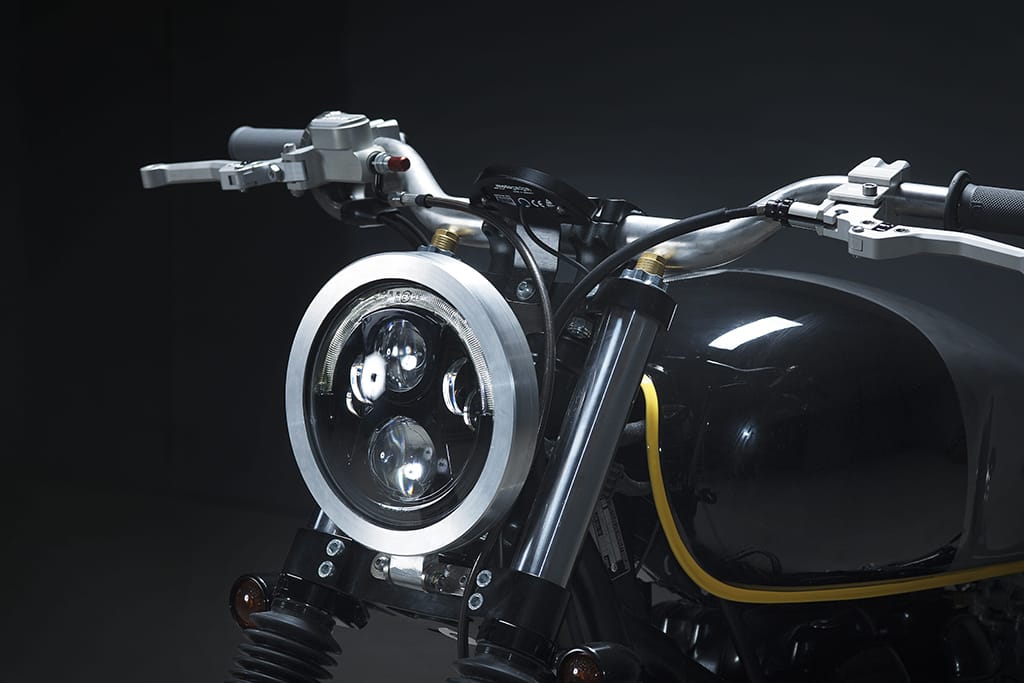 The headlight leads us up to a Brushed Easton EXP handlebar and risers, fitted with Renthal grips and a Motion Pro throttle body. The stock switches and levers have been replaced with a set of ISR 73-200 series brake and clutch levers with Integrated clamp switches. 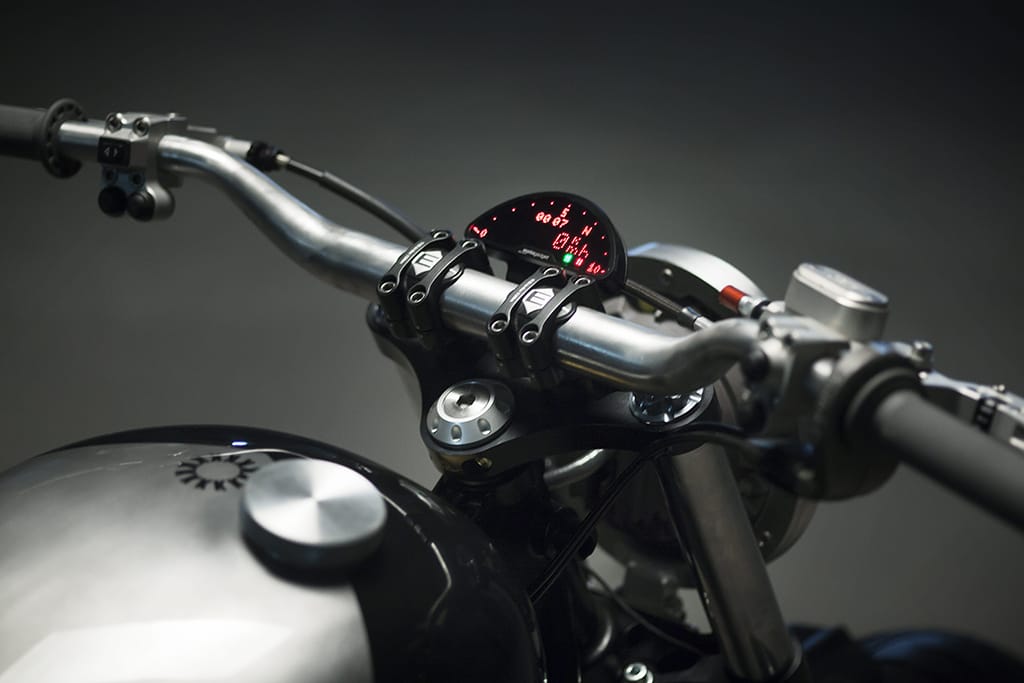 To keep things tidy a Motogadget m-Button has been squirrelled away, remotely connecting the ISR switches to the Motogadget m-Unit. Finishing off the T100 streamlined controls is a Motogadget Motoscope Pro speedo, which should tell Steve all he heeds to know when riding his Triumph Twin. 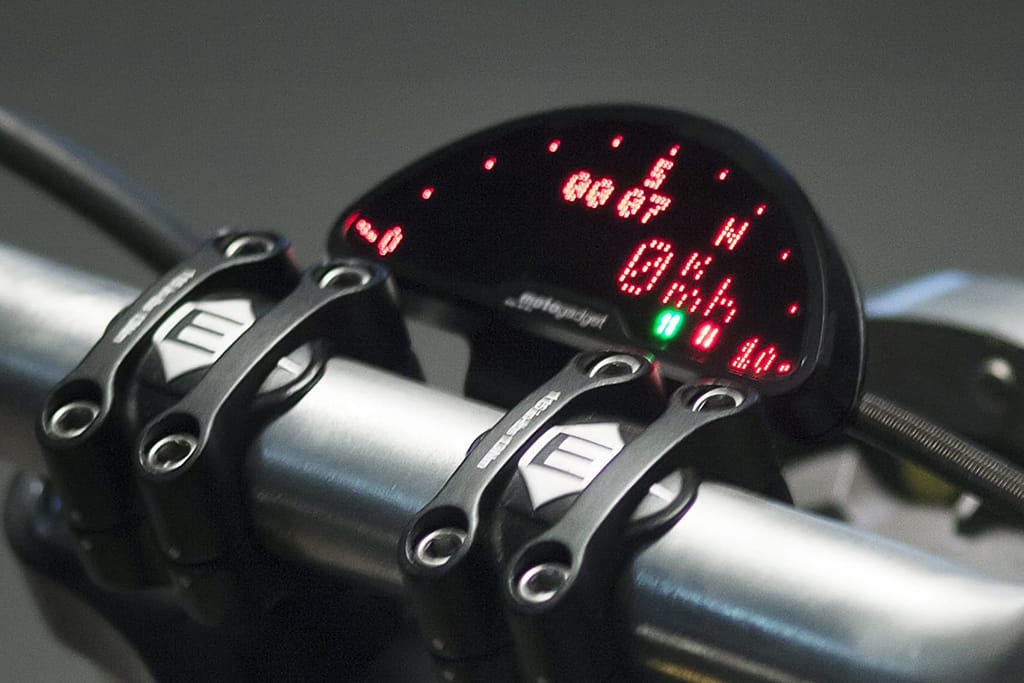 The EXP handlebar and those ISR levers lead us down via Goodridge brake lines to a ISR 6 pot caliber and ISR Floating front disk, which are not only a vast improvement from stock, but also look great, and there is nothing wrong with that. 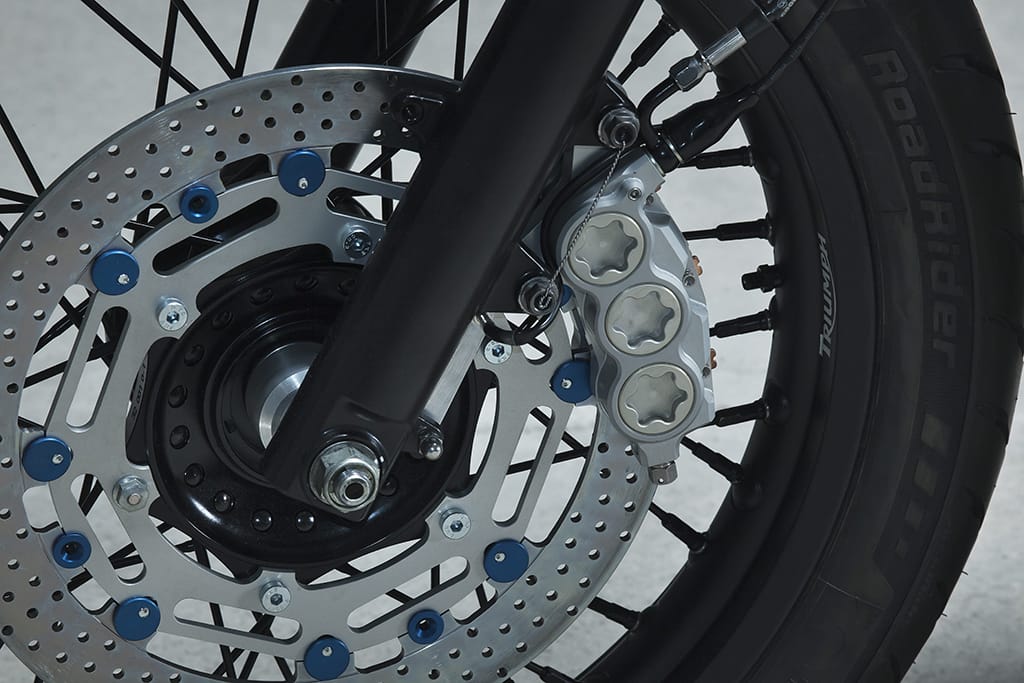 The brakes on the Bonneville are not the only thing which received a much needed upgrade, so did the suspension… bet you saw that coming! – the fork internals have been swopped out for a set of Andreani Cartridges with the rear receiving a set of Ohlins shocks. The forks have been fitted to the bike via a Free Spirits aluminium Triple tree, reducing the the T100 overall weight, and topped off with a ‘ribbed’ front mudguard for extra pleasure? 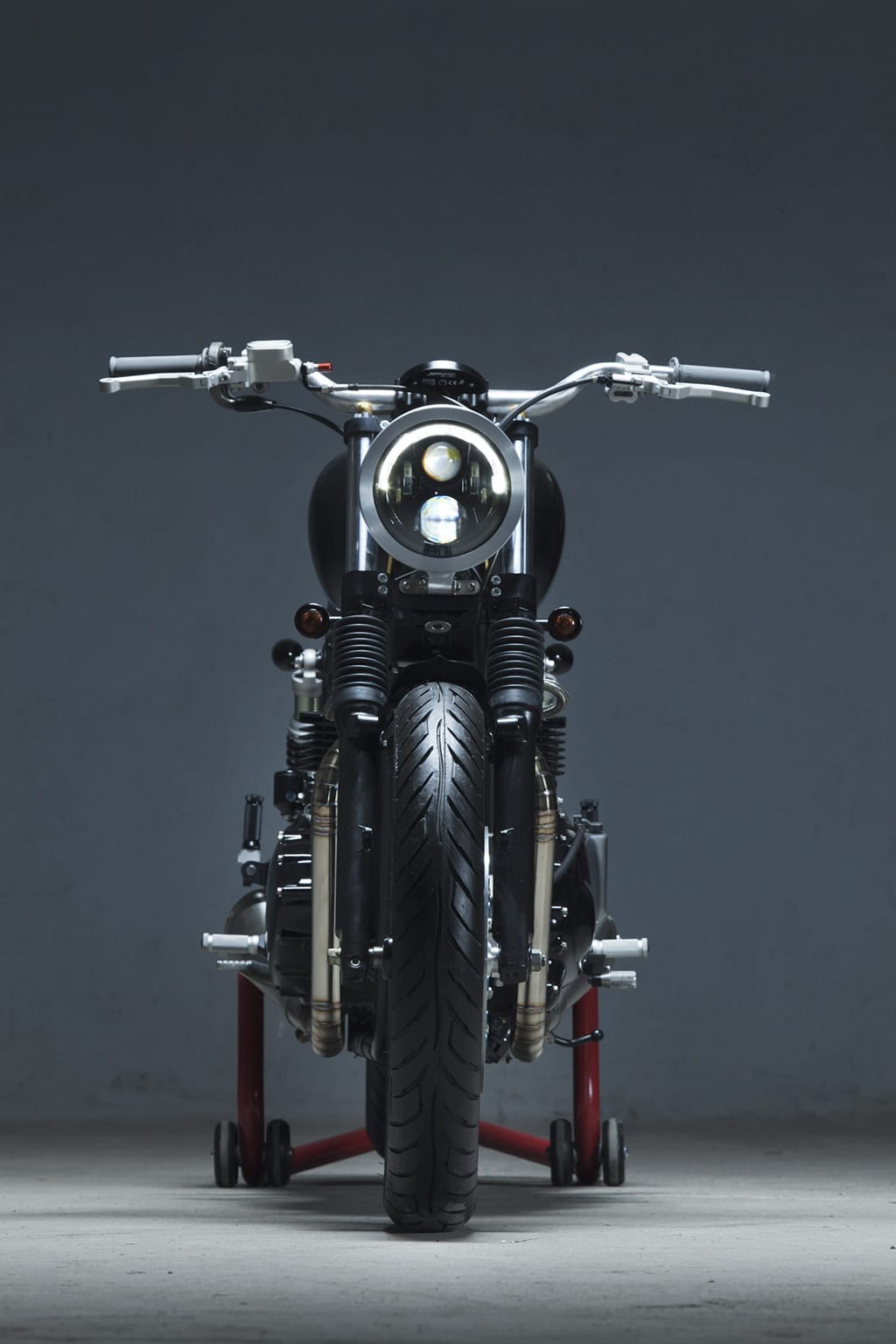 I have mentioned shock upgrades, and what they can do to the bikes handling. Having two Triumph Twins one with stock springs the other with a set of cartridge and shocks from K-Tech, all I can say is ‘speed bumps’…. one bike at 10mph the other at 30mph… need I say which has the upgraded suspension!  The stock steel wheels have gone, replaced with a set of Black Alpina Raggi tubeless wheels, shod with Avon Roadrider tires. 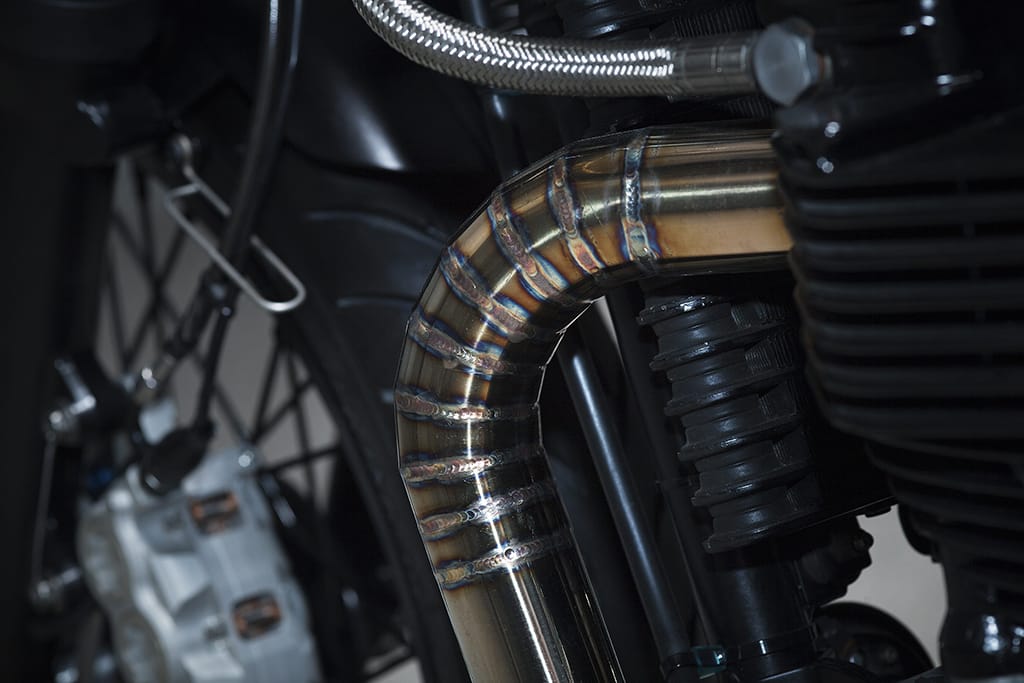 With the handling improved, it was time to get more out of that 865cc Hinckley Twin engine, a power plant more than capable of giving extra power without compromising reliability. With the carb model machines its simple, just let it breathe!, on this occasion, and it is overkill, involved fitting a set of Keihin FCR 39mm flat side racing carbs!, as well as replacing the exhaust system with a set of custom made TIG welded headers (why bend when you can TIG) fitted with Sparks end-cans. 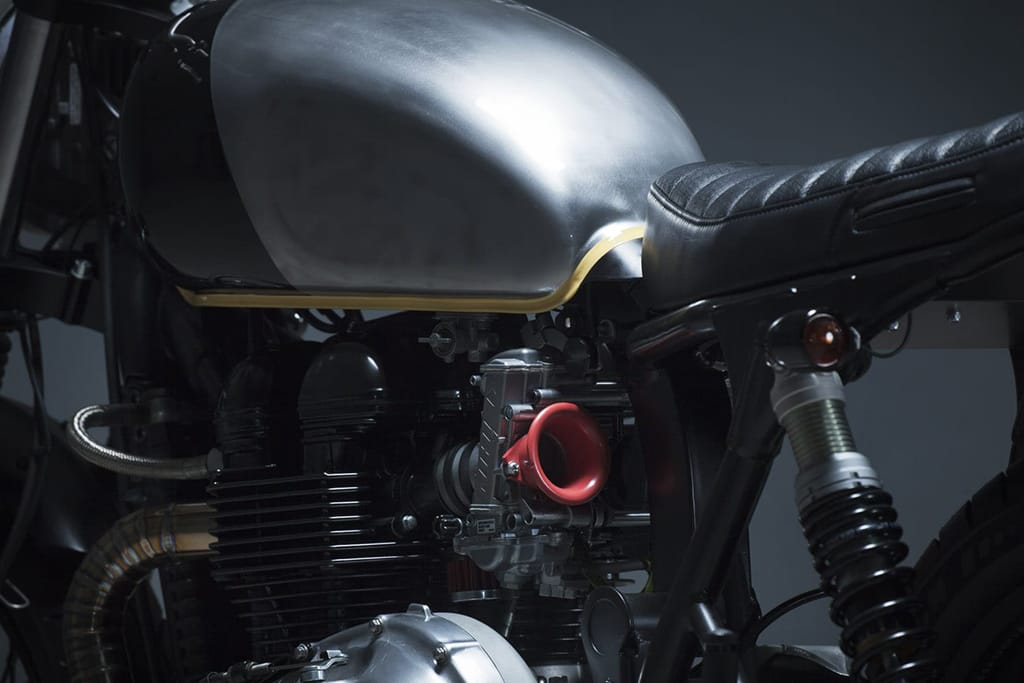 Like the Bruno, the Keihin FCR 39mm have been fitted with the better looking velocity stacks, (for the photo shoot) for everyday riding, the Triumph will “mostly be wearing” a set of K&N’s conical filters. 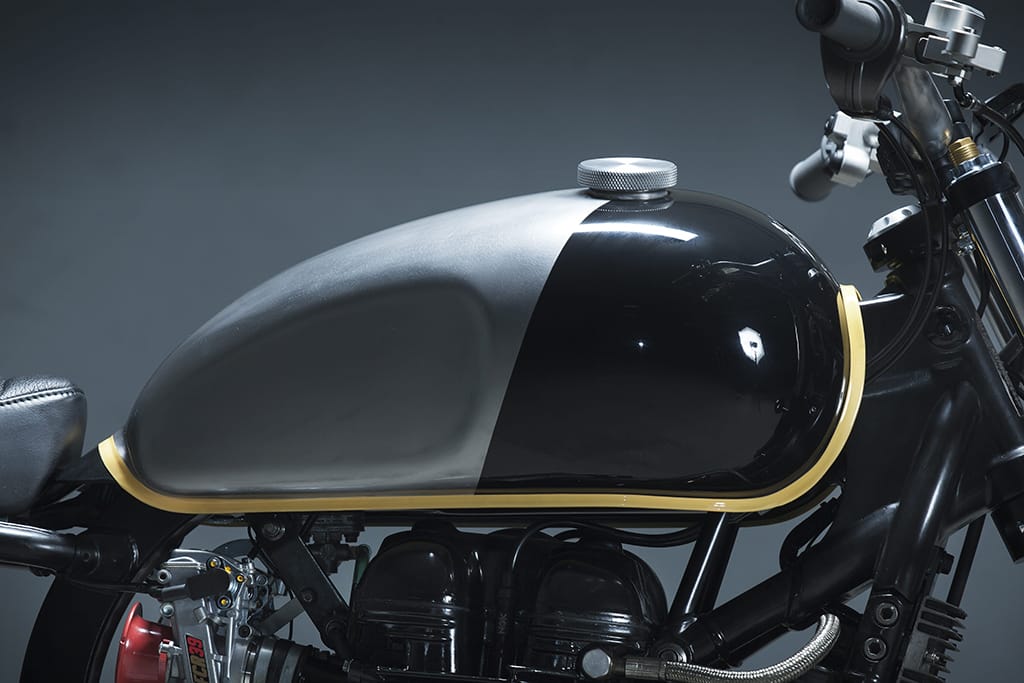 Crowning the build, is a petrol tank finished in Kiddo Motors company colours of Black over raw metal, with yellow detailing along the tank seam, finished with Kiddo tank graphics and a Motone tank cap, with the contrasting colour scheme following on to the T100’s engines side covers, adding to the finished bikes detailing a treat.