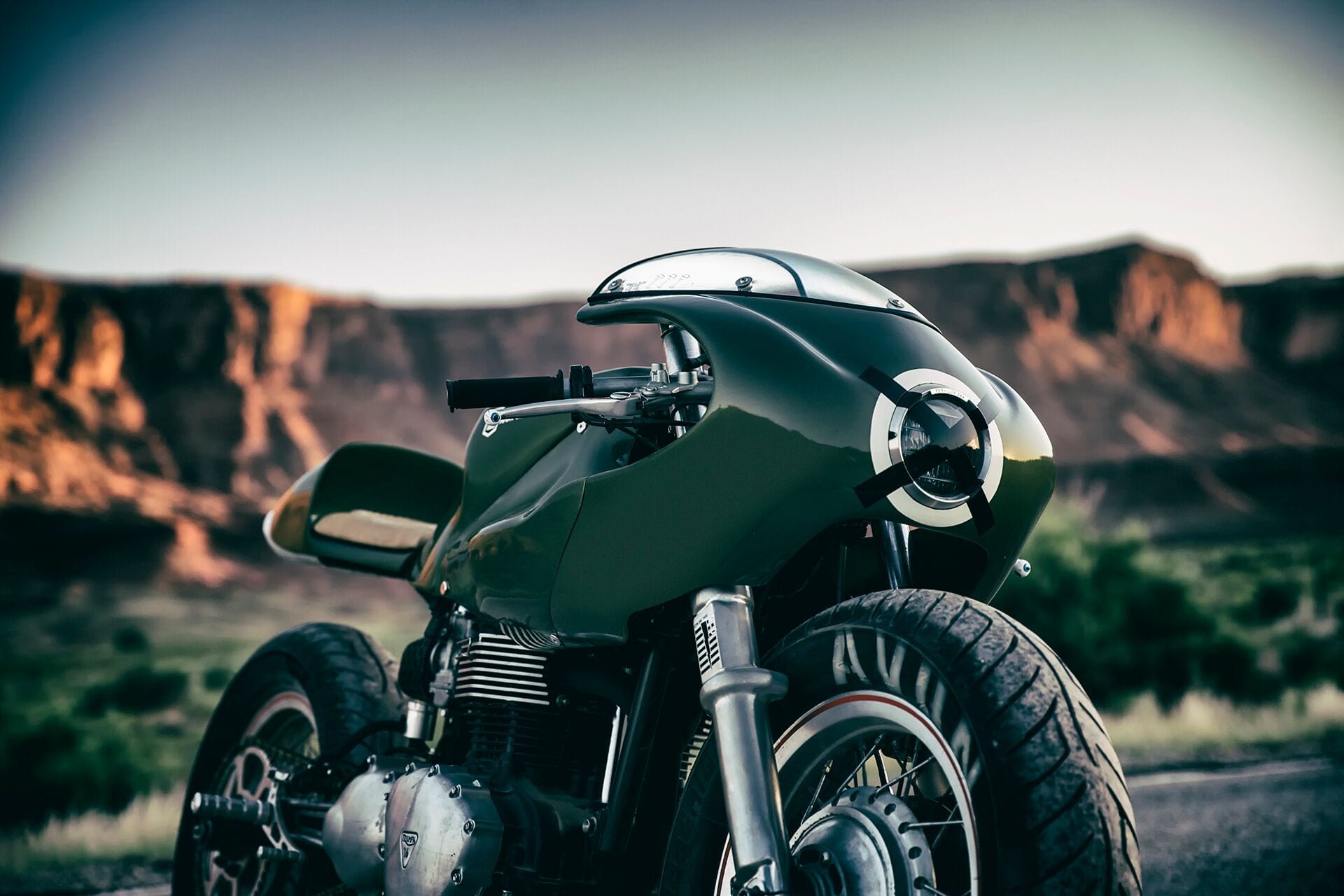 Everyday we seek inspiration, often coming from exploration – for me, the end result is Bonnefication. Created to share, and in-turn, I hope inspire! But lately, very little in the ‘New Wave’ custom Triumph scene has inspired me!  Though the reaction to Scrambler styled builds posted on social media sites such as Pinterest and Instagram would suggest many are happy with the current trend. 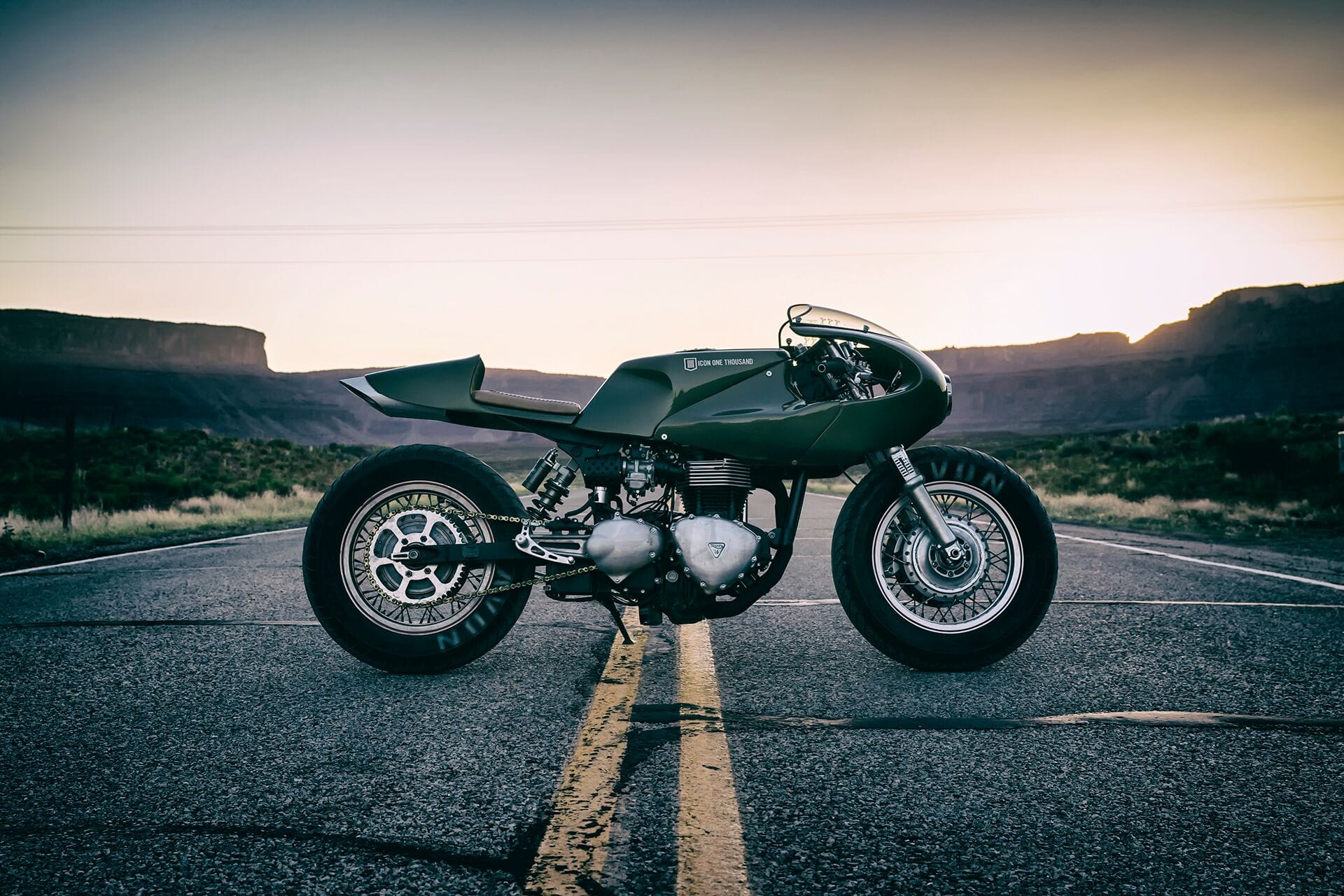 It was Wes White’s late sixties Triumph TR6C featured on the website Chop Cult in 2009, which started my interest in the Desert Sled. A year later the Hammarhead Jack Pine was revealed to the world on BikesExif. It was these two Triumph Scramblers, one old for style, and one new for practicality, which inspired me to build. 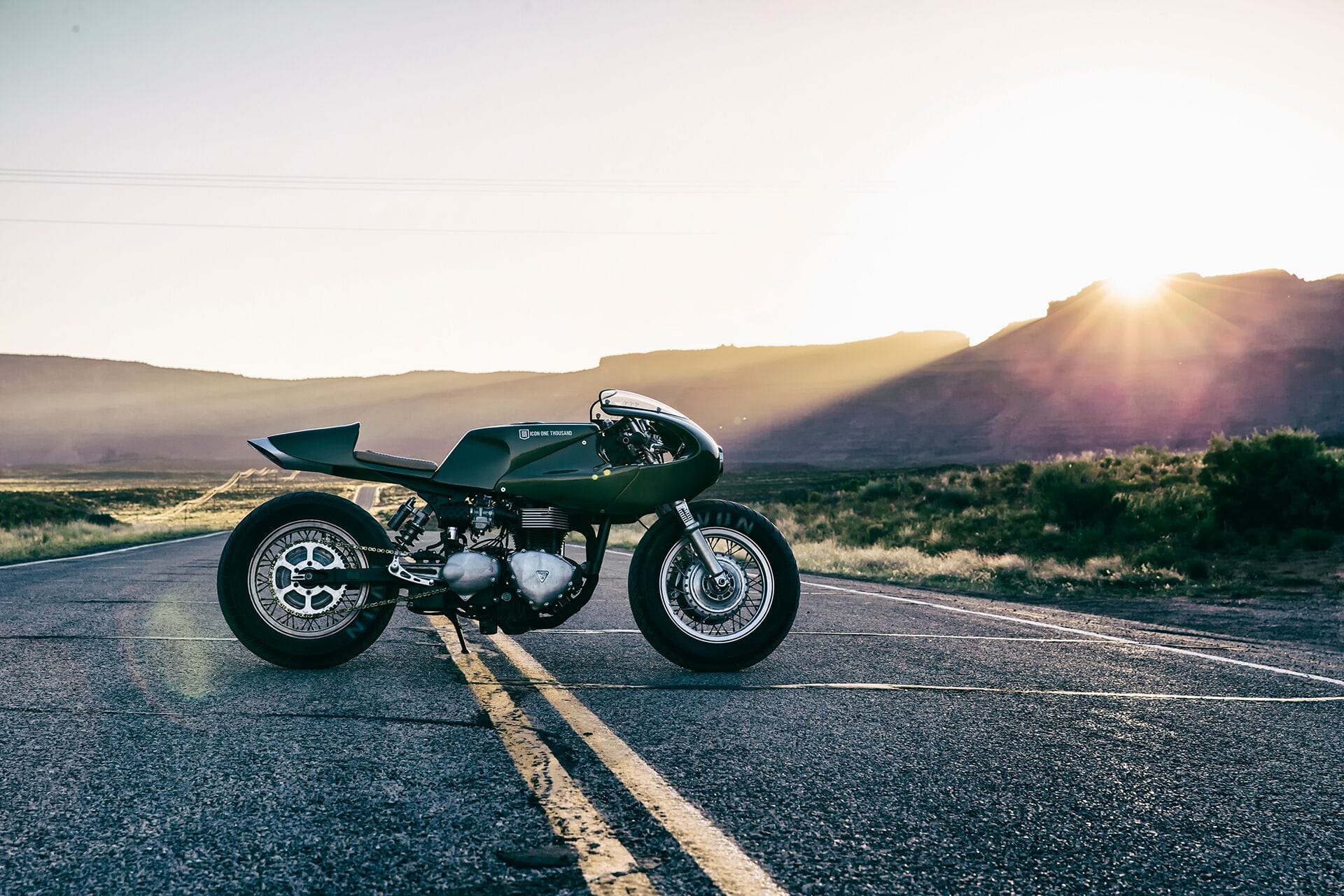 That was six years ago!, and I believe its time to move on!. Once again I’m visiting motorcycle museums for ‘vintage style’, and keeping an eye on the web and custom motorcycle shows for ‘inspiration’. 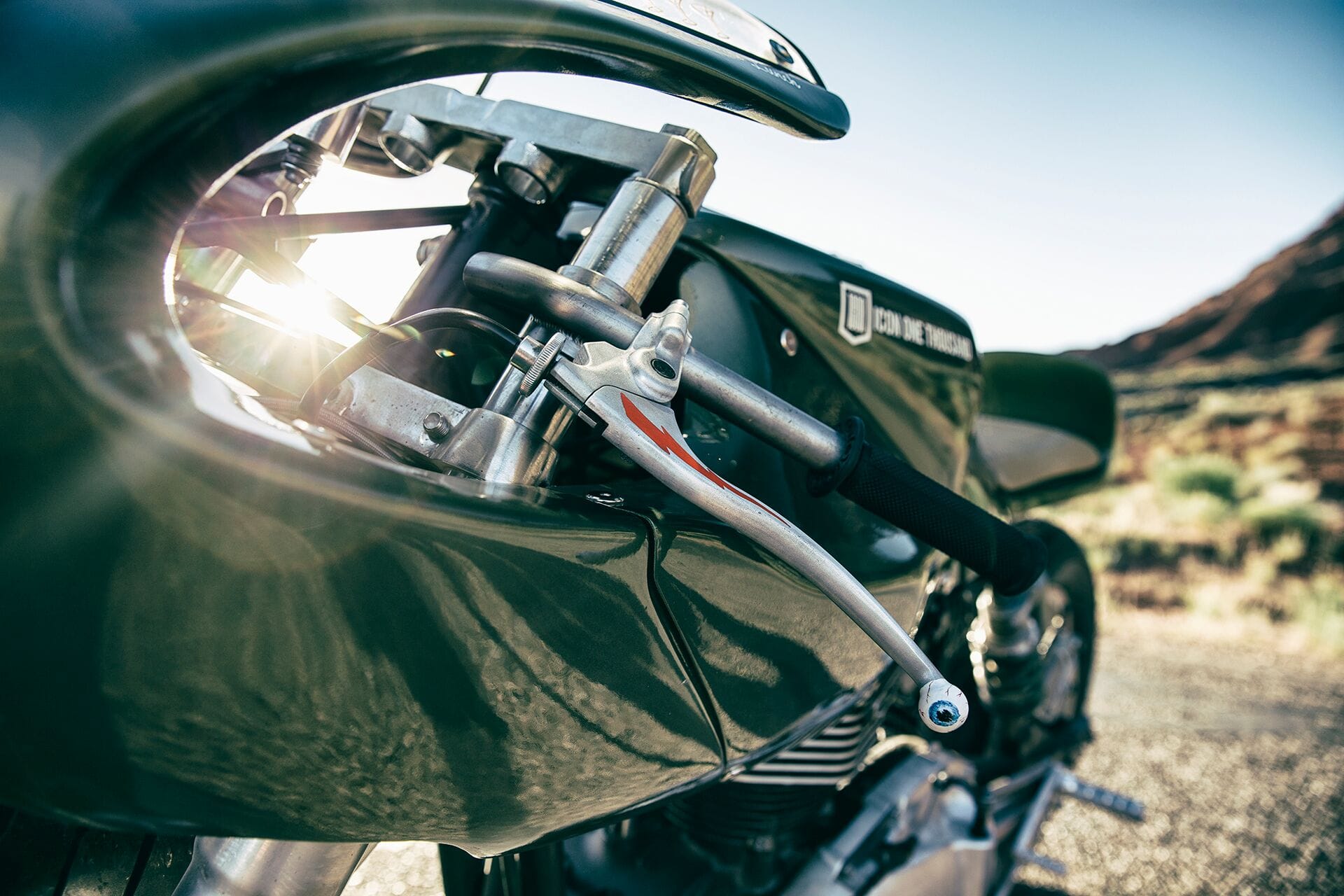 I am also planning a workshop at my home in Dorset. It will be in this workshop, and with the help of local craftsmen and bike builders, I hope build another custom Hinckley Triumph… or perhaps just make a bloody mess of a good bike!, regardless, this time, it wont be a Scrambler! 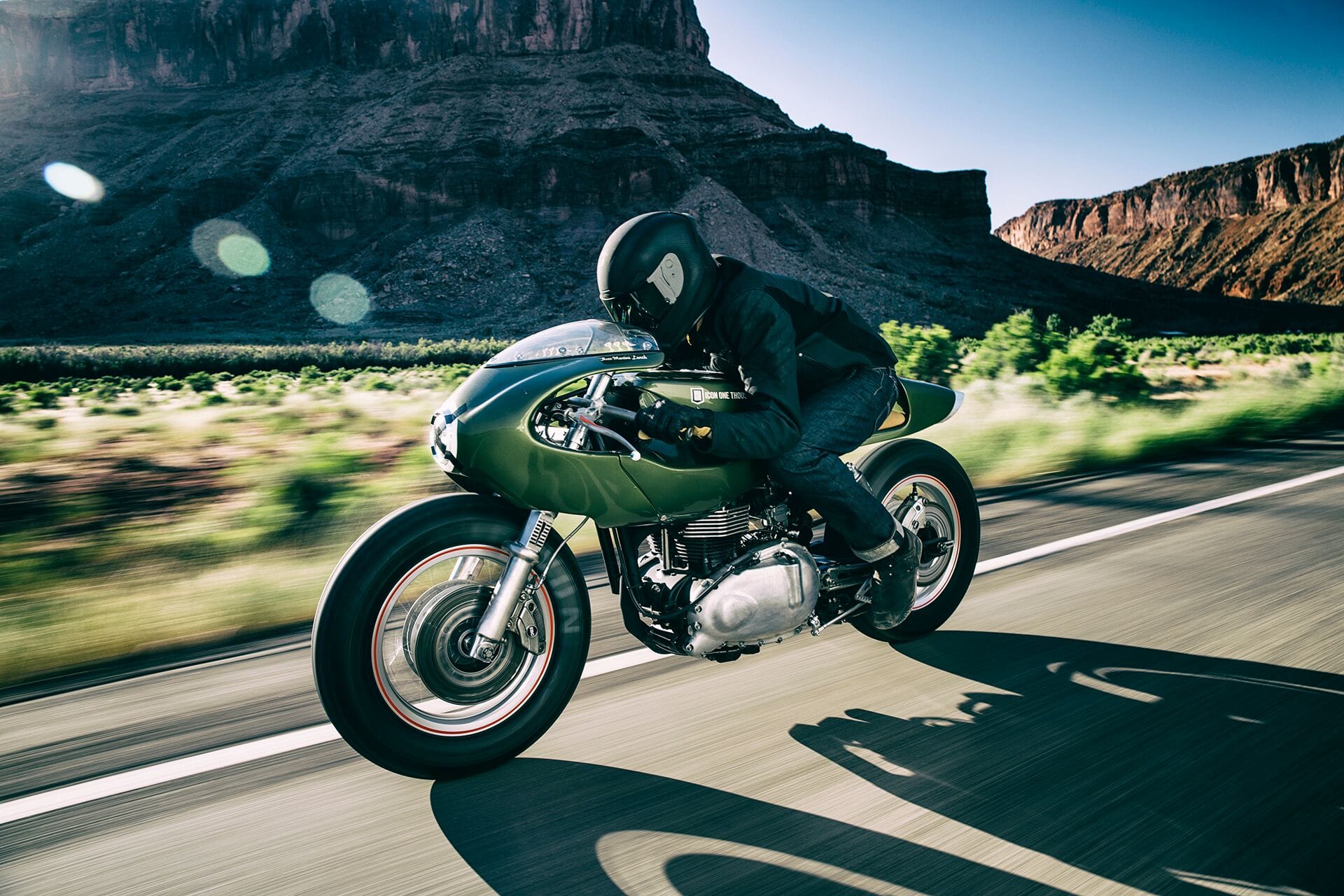 What may influence this next builds is this 2014 Thruxton, named the “Three Martini Lunch”, a collaboration by Icon 1000 and Triumph North America, a build  “fuelled with shop-floor gin drinks and paint fumes”. Kurt Walter the creative designer at Icon 1000, wanted a custom Triumph that would appeal to ICON core market, maintaining the road-race styling and component cues of the ICON 1000 bikes. 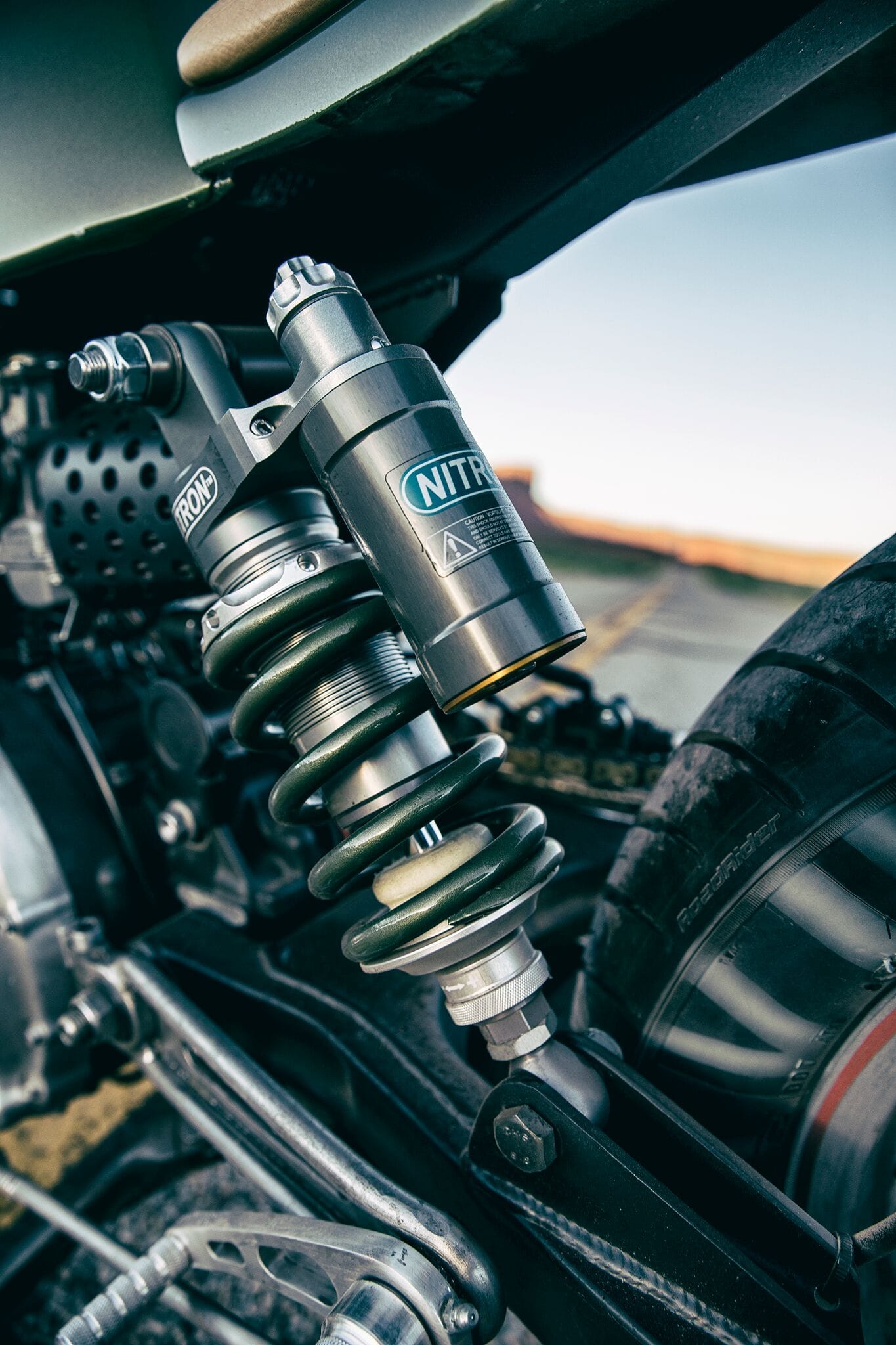 As usual at Bonnefication we start with the frame, clearly undergoing a huge amount of reconfiguring – forget frame loops!, this Thruxton has lost it’s entire rear-end. Replaced by a custom mono- subframe, supporting the rider, as well as a one-off Nitron mono-shock setup. 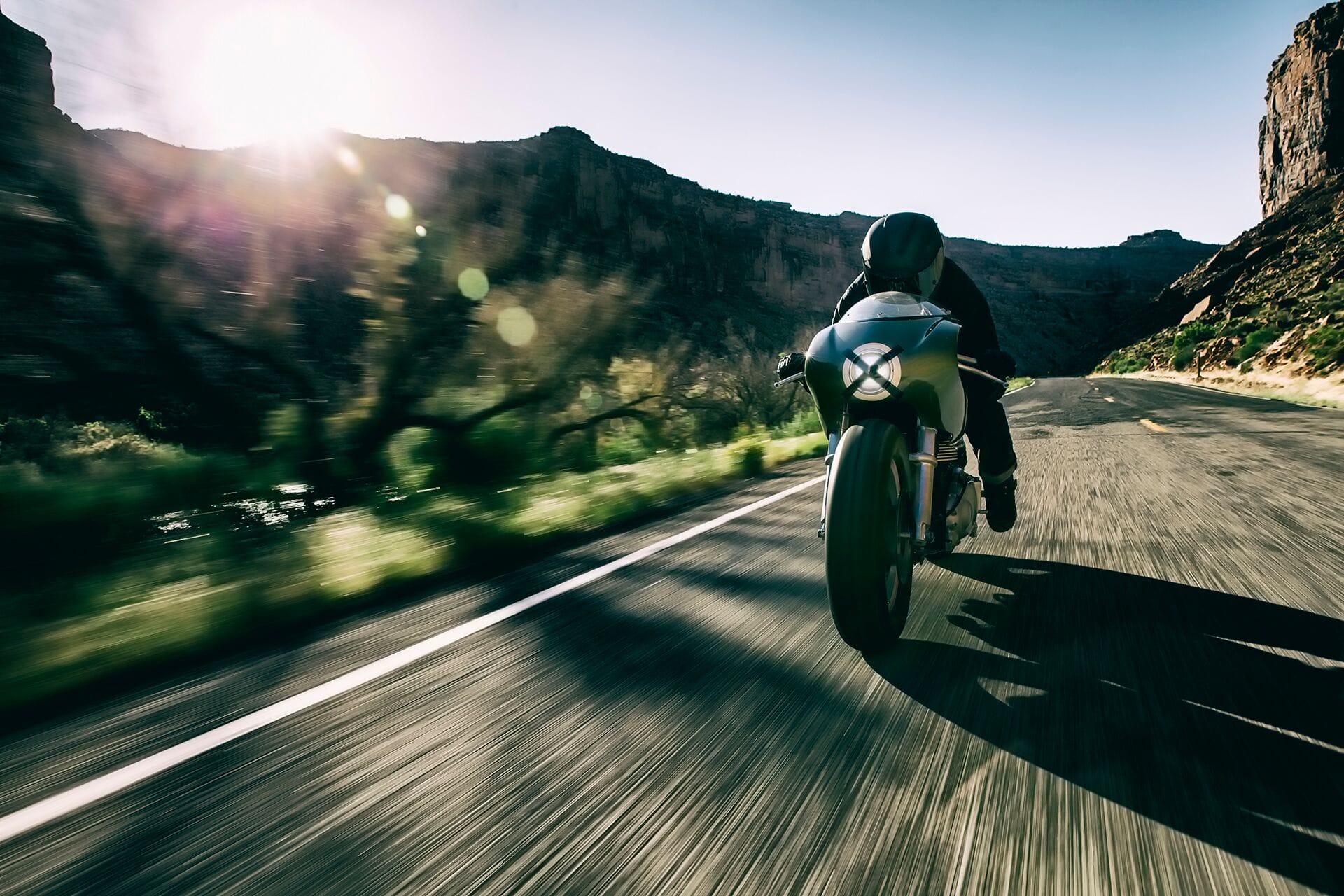 Frame modifications continue under the Thruxton, with the removal of much of the detachable cradles, exposing the engine and giving this Triumph a Ducati vibe – compounded by the fitting of a modified Ducati MH900E fairing from Aristech, painted in is General Motors Verdoro Green, and fitted with a headlight found on logging trucks…. now thats a mongrel of a fairing! 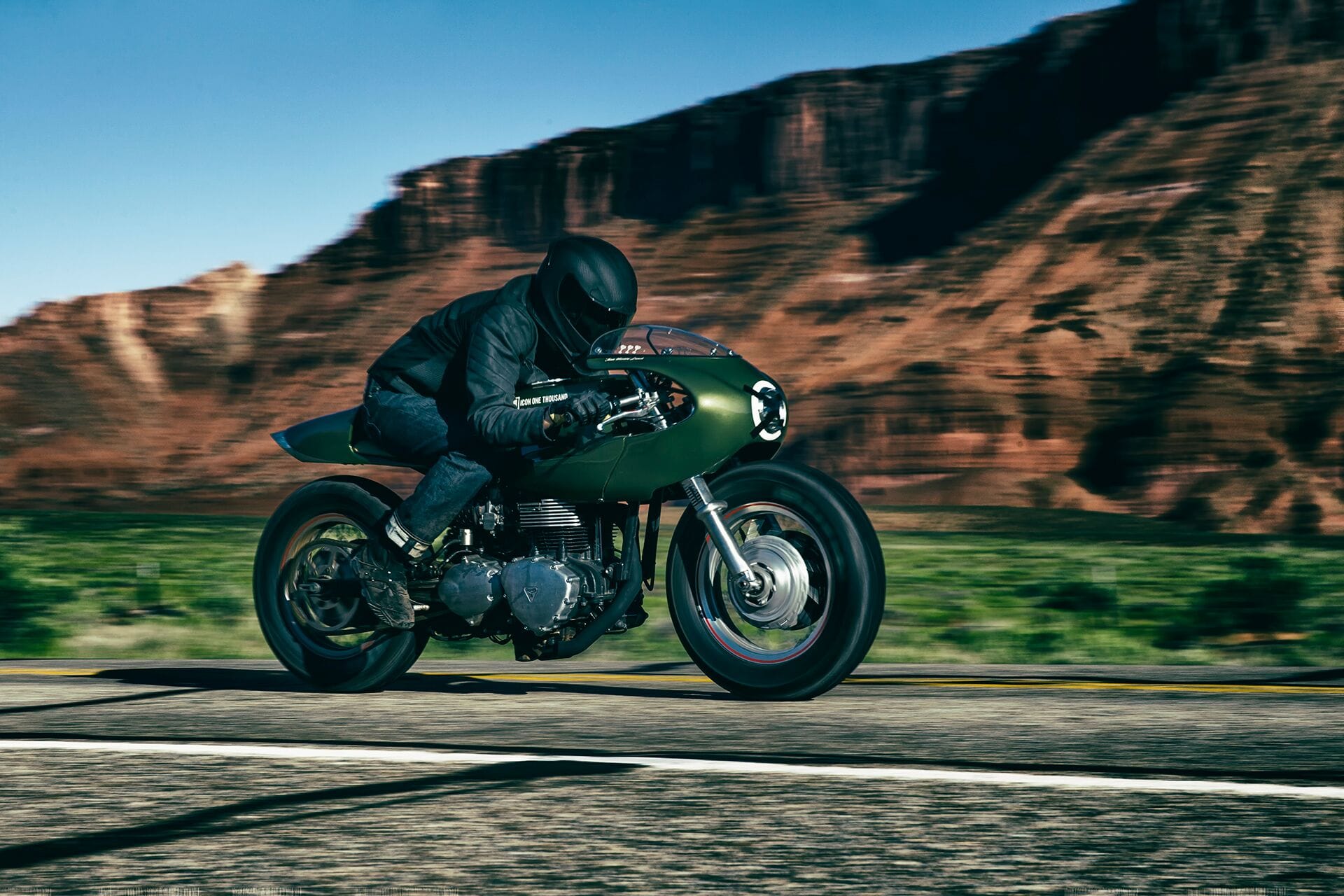 The classic Triumph styling is long gone, what may raise a few eyebrows is the choice of tank, meant for a Yamaha FZ600 – again heavily modified, not only to fit the Hinckley frame, but also to allow room for the re-routed, and heat shielded exhaust system, now running over the engine and under the Aristech Harley tail section. 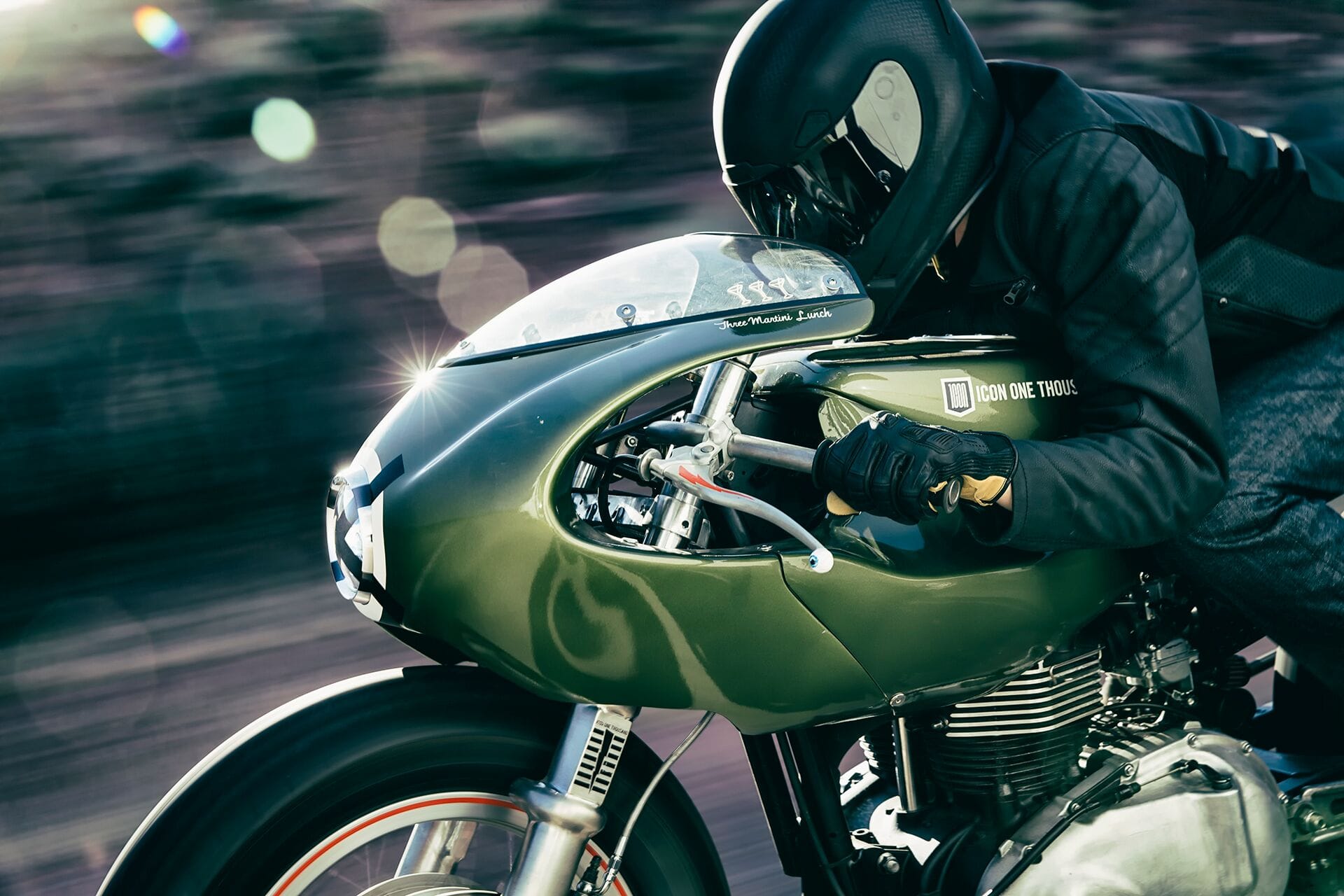 Kurt wanted to fit the heavily shouldered 16” rear wheel from a Kawasaki KZ1000 to both front and back of the Thruxton, made possible by welding up the cush-drive on the wheel destined for the front. 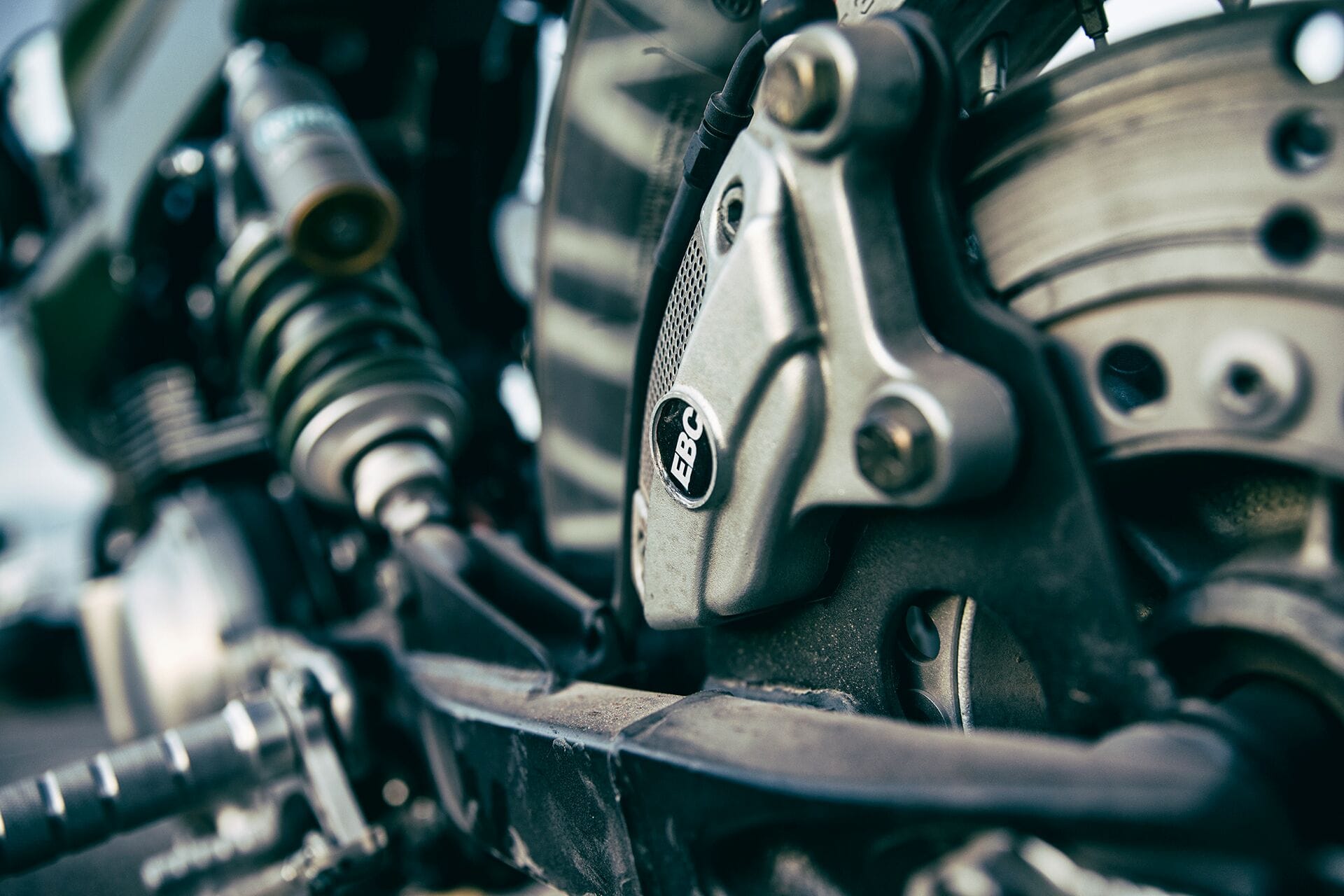 The fitting of the wider wheel, now shod in vintage Avon tires, meant that it no longer fitted the stock forks. To overcome this, the stock forks were replaced with those from a Harley Wide Glide, and involved cutting bits out of that Ducati MH900E fairing.

What ever your thoughts on the  “Three Martini Lunch”,  you can’t deny it’s fascinating!, perhaps like the Hammarhead Jack Pine, it may be a build which drives the custom Triumph scene in a new and exciting direction…. lets hope so. 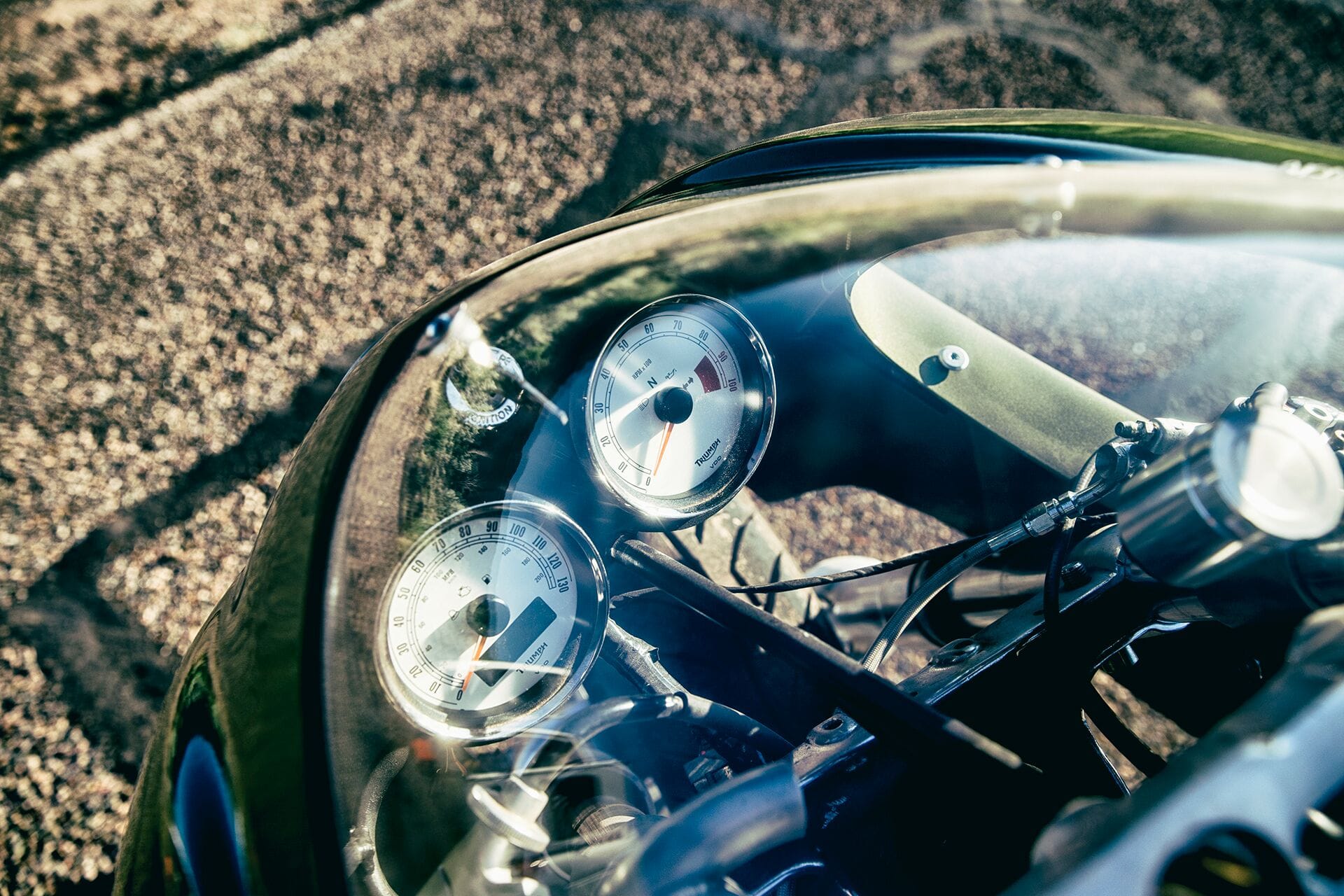 Click on the play button in the top preview pic for the video.