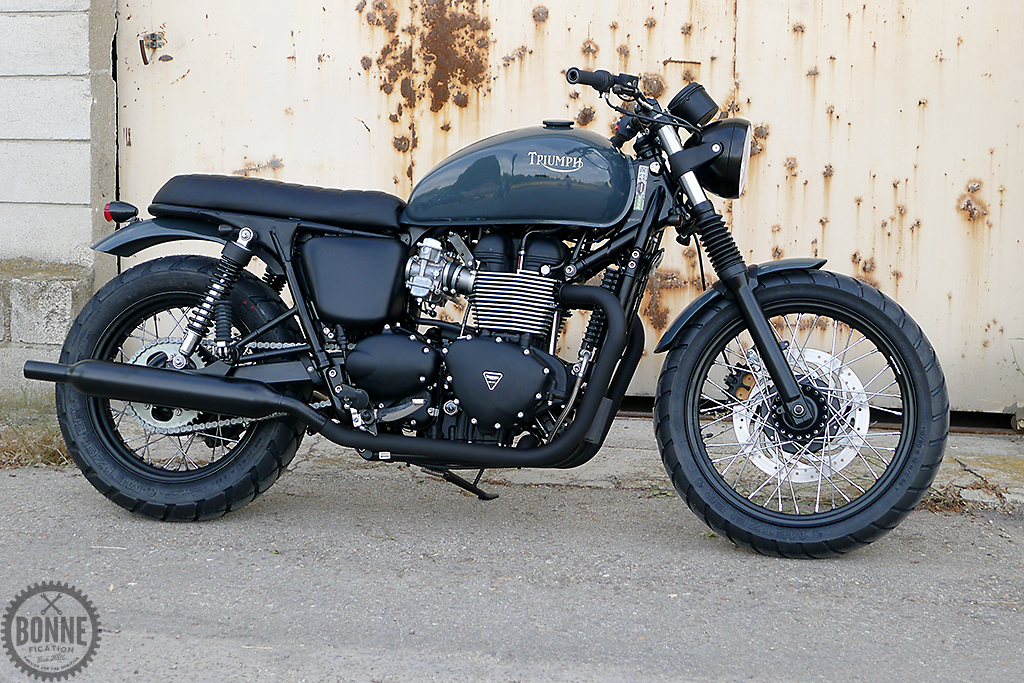 Cafe Racer Dreams who are based in Madrid, Spain are in my opinion one of the most significant custom Triumph Twin builder in existence today. But it wasn’t a Triumph which brought Cafe Racer Dreams, aka CRD to my attention back in 2010, but their third build which was based on a 1979 Honda CB750 and was know as ‘Military Gold‘ – the bike like many was featured on BikeExif who wrote ‘CRD have shown once again how small (and inexpensive) changes can radically change the character of a bike’
[slideshow_deploy id=’11006′]
Its wasn’t until build #8 did CRD set their eyes on the humble Triumph Twin, a build which was closely followed by builds #10, #12, #15, #18, #20, #24 and #26, eight bikes which demonstrate the now popular look of a cut frame, thin seat and classic tires.
CRD were by no means the first to cut the back end of the Twin and weld on a loop, that as far as I am concerned that was first seen on the ‘Bumble Bee‘ by Deus Ex Machina, Sydney, but what CRD was to do was to keep doing it and doing it well.
Cafe Racer Dreams are now into their sixtieth build, which includes a range of machines from Honda’s, Yamaha’s, Ossa’s to BMW’s & Triumph’s. On this occasion I’m going to take a look at CRD’s last two Triumph Twin build numbers 31 and 53.

CRD#31
CRD#31 is based on a 2008 Triumph Bonneville which was built for a client in locally in Madrid. The client wanted a dual purpose Triumph which would be comfortable for the city and good for a blast along dirt tracks in the countryside. Like most new wave custom builds mores comes off than goes on, which for the Triumph Twin is good news as they are not the lightest go bikes. 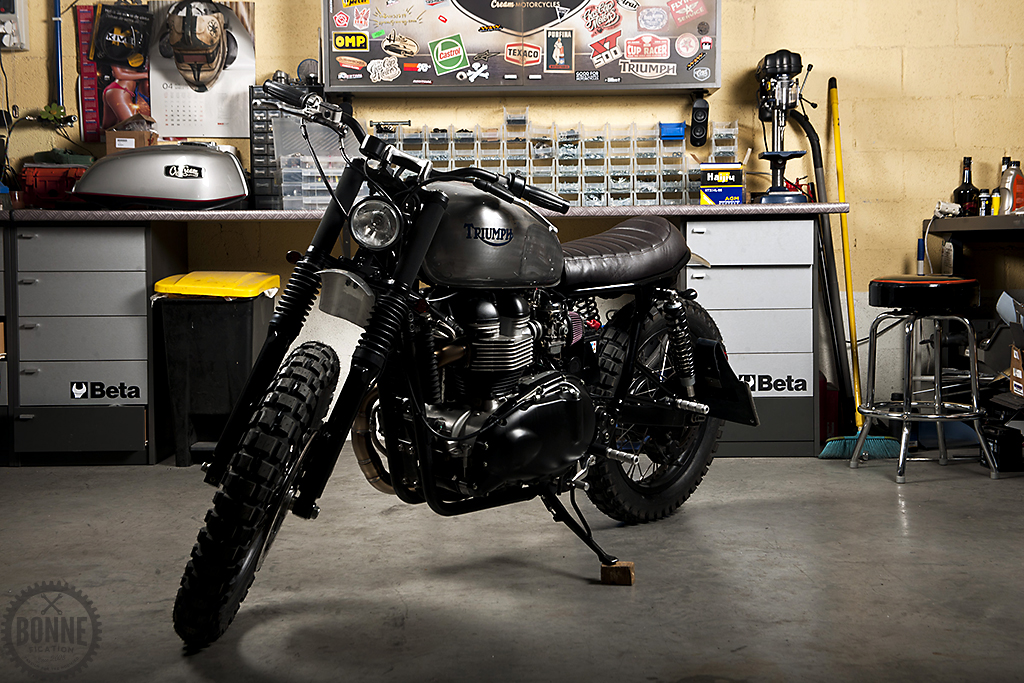 CRD striped the bike down to the frame and resembled only using the essentials which doesn’t include the last 60mm of the fame which has been chopped and a loop added, along with a new custom seat and rear mudguard. Gone is the OEM air/battery box being replaced by a small exposed tray sitting behind the carbs which have been fitted with K&N filters. This has been left for all to see as the side covers and bracketry have been removed leaving a fairly see through frame for a lighter appearance. 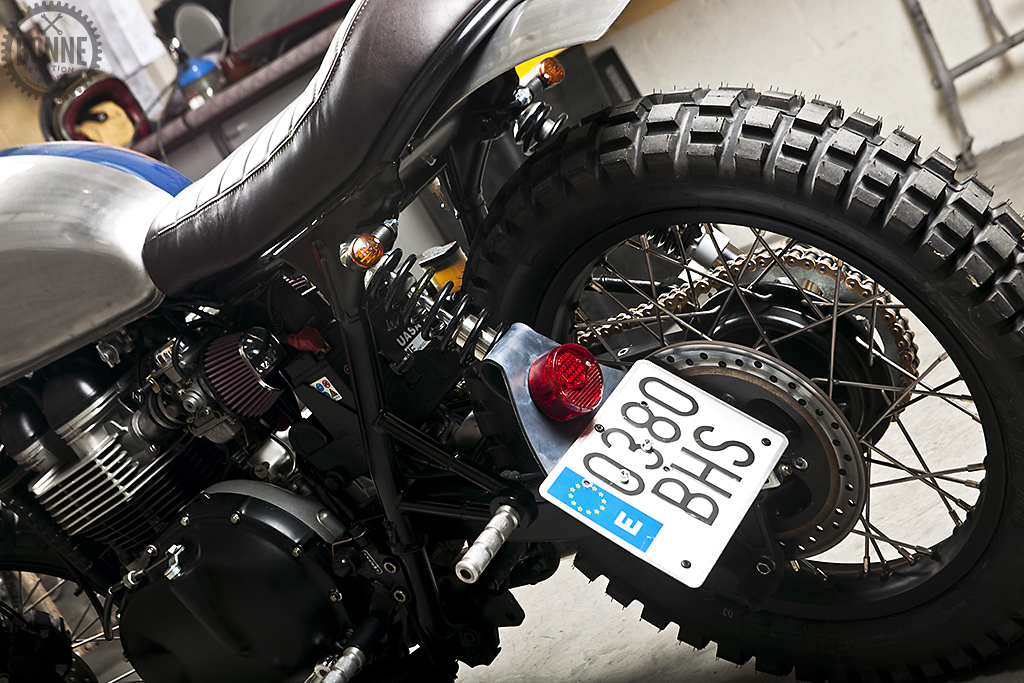 To keep the rear mudguard clean the rear light and mudguard have been relocated to a side mounted unit, which though may be unpopular with some does result in a much tidier tail end. The front mudguard has been replaced and relocated to the bottom yoke, MX style and should give those Continental TK80’s plenty of room and keep the bottom mounted 4.5″ Bates style headlight clean if things get too muddy. 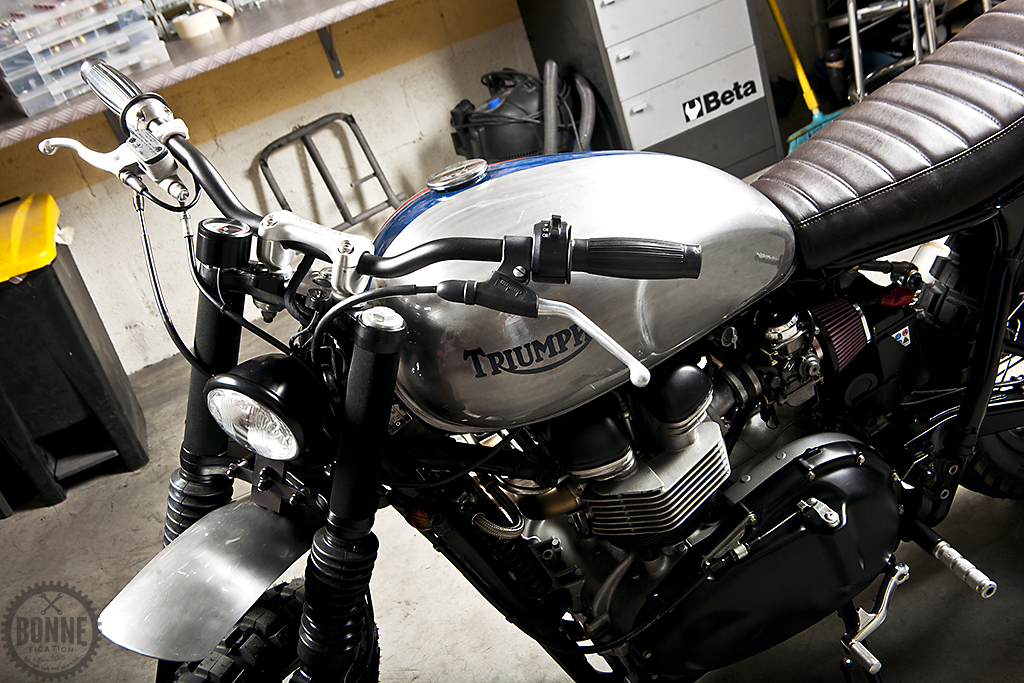 The Bars are Tomasellis which have been fitted with Domino grips and Domino clutch lever, along with an enduro style DRC light switch and a AJP Brake Lever and Master Cylinder. 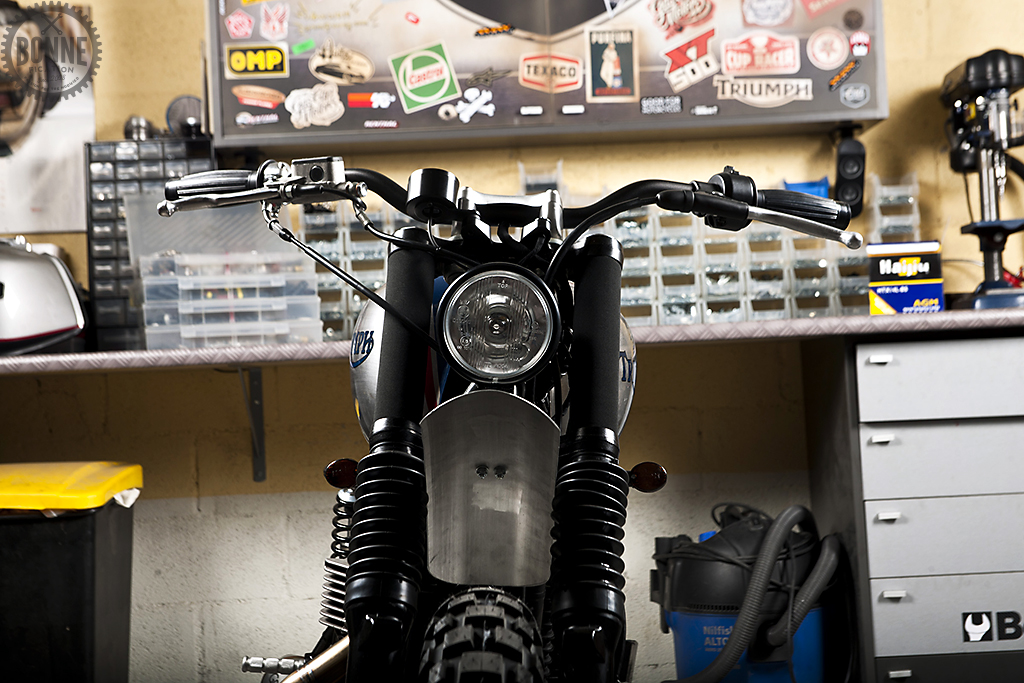 The start/kill switch has been replaced with a car ignition switch and relocated. The speedo needs no introduction as the XS650 style mini speedo has featured on many custom builds as its a doddle to fit. To complete the bike, the petrol tank has been finished in lacquered raw metals with American Airlines style stripes giving the bike a classic sporty look.

CRD#53
53 is a UK commission and is based on a brand new zero miles EFI Bonneville, which unlike CRD#31 has had a lot less done, but this Bonneville has had all the right mods in all the right places, creating a subtle and attractive Triumph Twin. As you would expect the frame has been chopped and looped with the addition of short mudguards and short seat. 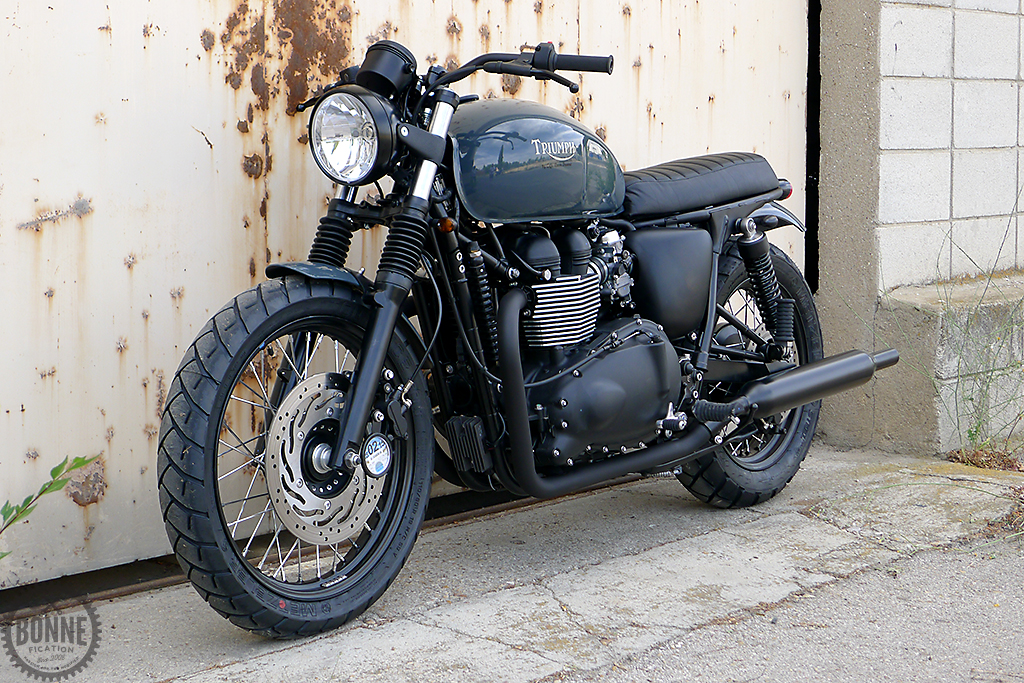 Other modifications to the 53 include replacing the tail light and turn signals with more compact Shin-Yo items with the indicators being reallocated. Unlike #31 the bars are Rental but share many of the same accessories as CRD #31 including the relocation of the ignition. 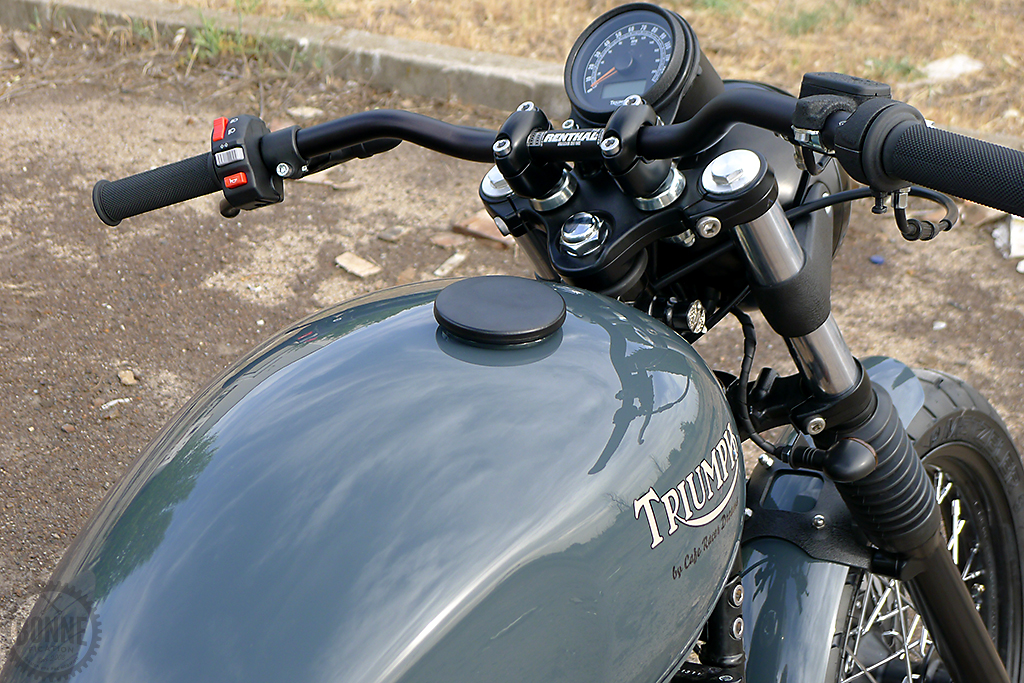 The tires on the #53 are the popular Metzeler Tourance dual sports and give this Triumph an off road capable ‘Great Escape‘ look with on-road usability, something which Hilts ‘The Cooler King’ aka Steve McQueen would be very happy about I’m sure. 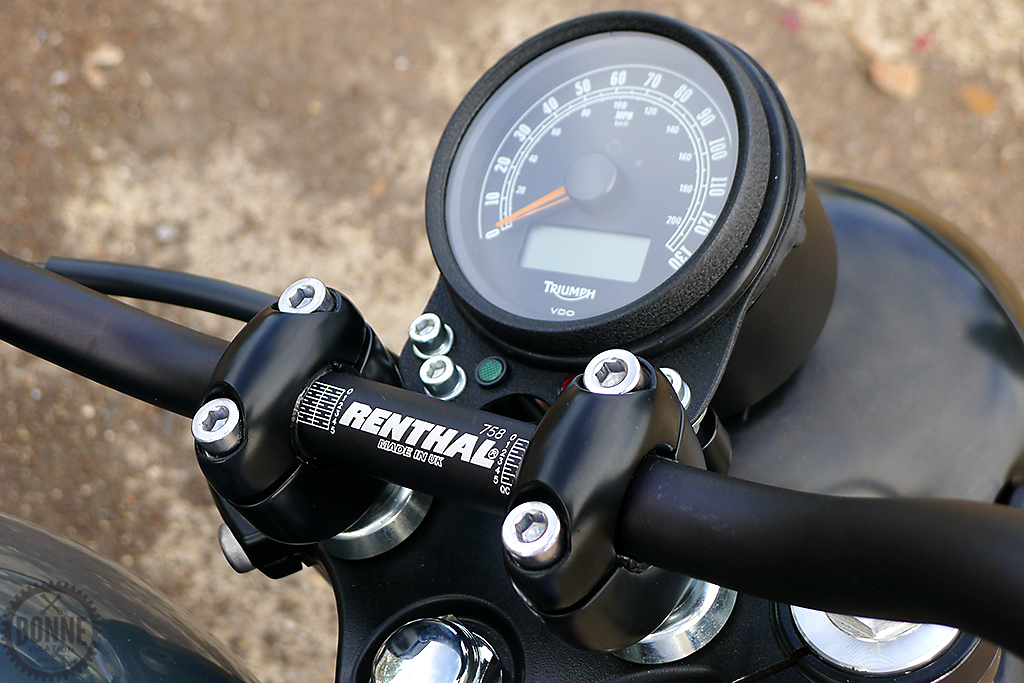