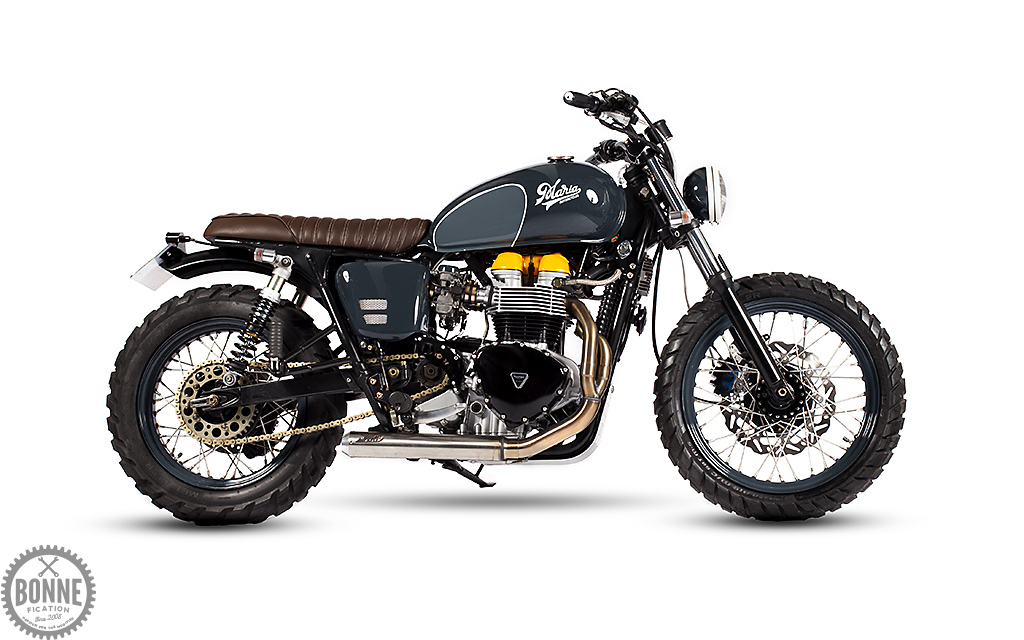 Lisbon based Maria Riding Company are another peninsula based bike builder who have been putting together some very nice custom Triumph Twins over the last few years. Their latest build the ‘Luther‘ is based on a clients own 2001 Bonneville which was sent to Maria Motorcycles with the simple brief that the finished build needed to have ‘Off Road tires, better Brakes & Shocks and a much cooler sounding Exhausts’. How the finished Triumph would look with these three key ingredients was up to Maria Motorcycles. 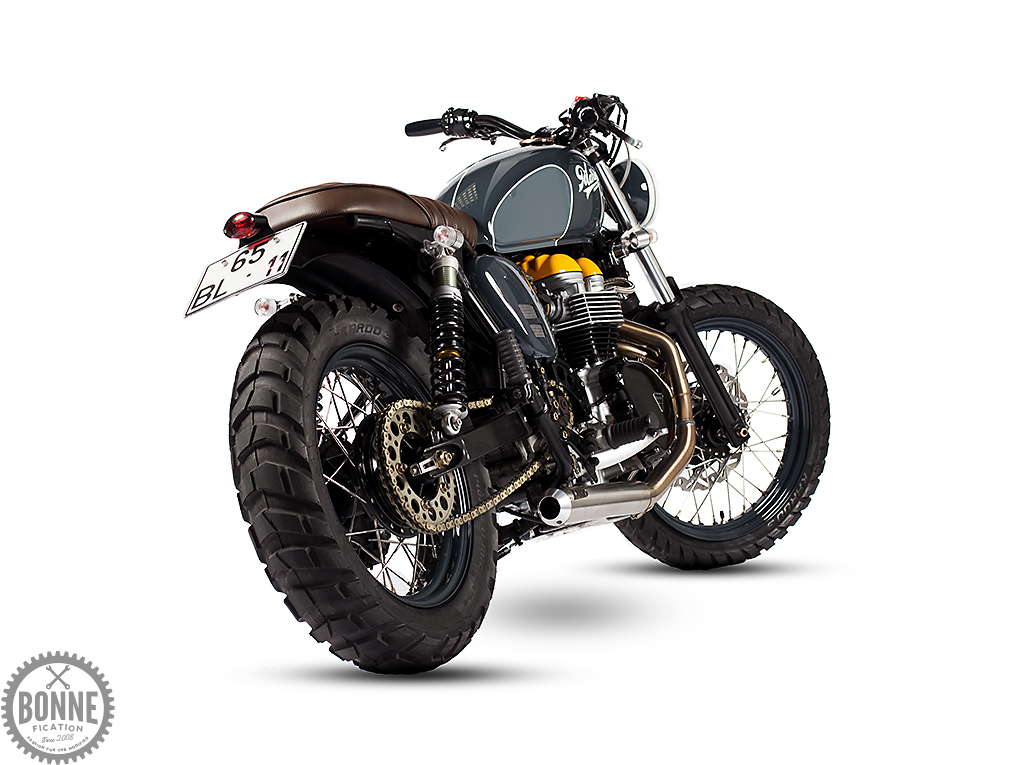 The guys at Maria needed to keep the upgrades simple and less technical than their previous builds, and paired it with a colour scheme inspired by German WWII military vehicles but with a modern contemporary approach…. An interesting concept, but then Steve McQueen did make Triumph with a german twist popular, go Steve! 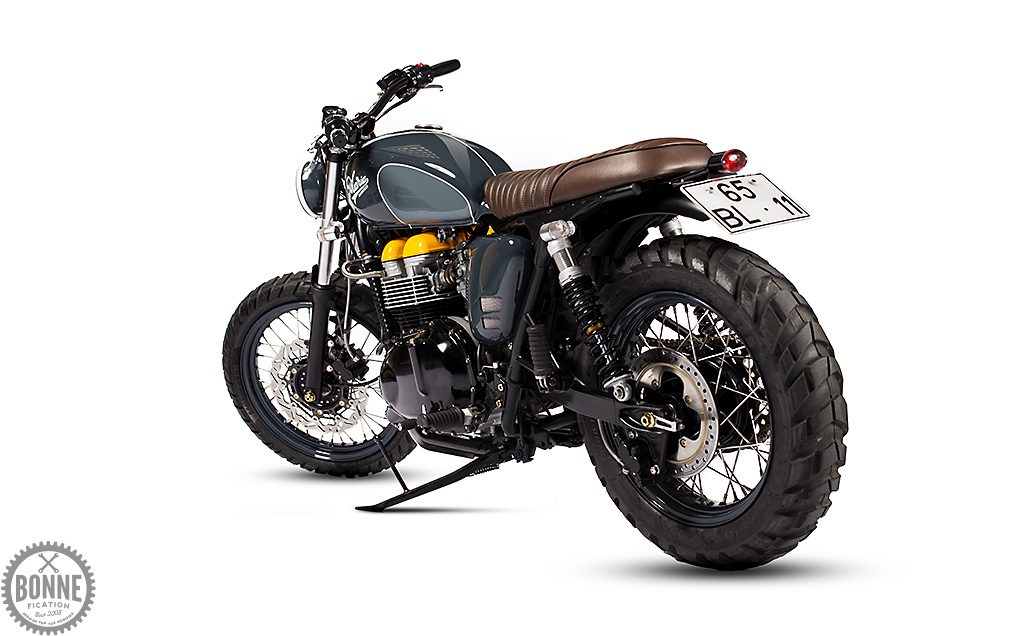 Setting to work the Bonneville was shortened but not looped, proving doing so is not always necessary. As you would expect with such a frame mod; the stock seat has been replaced with a custom item which has been finished in brown leather – with the stock mudguard and rear light assembly being replaced by a alloy item and a Shin-Yo tail light with integrated licence plate mount. 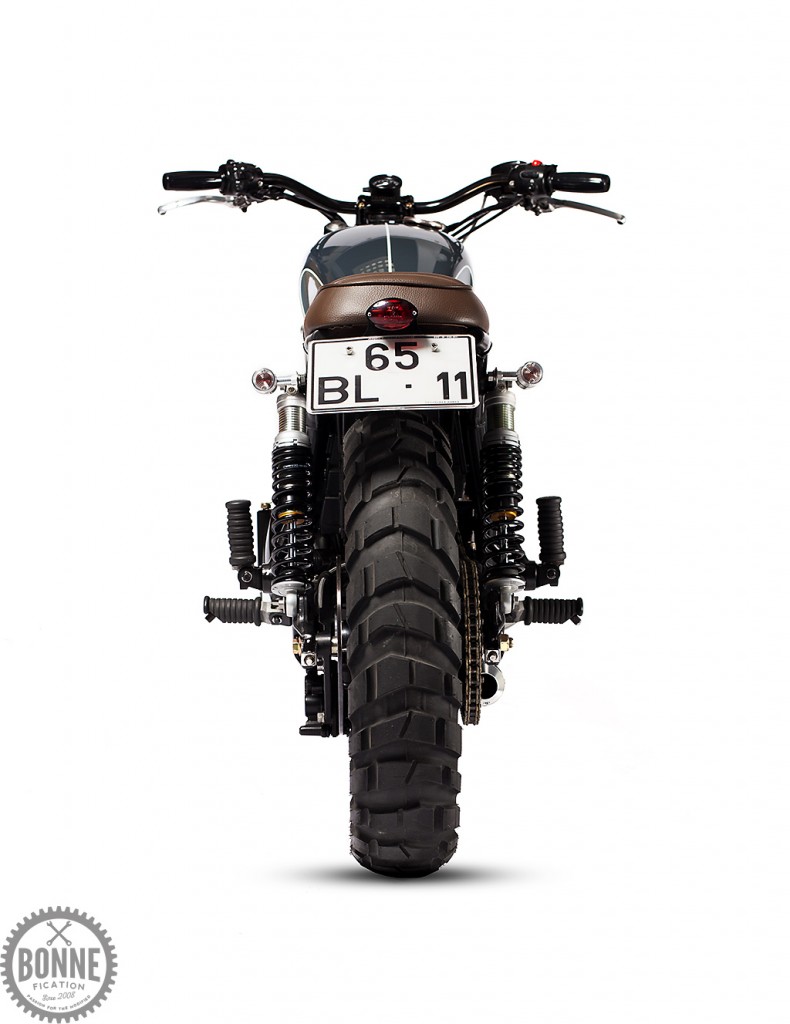 The front the mudguard has been binned, which we all know can be a little unwise especially off-road or in wet weather, then whats good for that chap David Beckham is good for anybody. The mudguard is not the only OEM part to find the skip with the stock clocks being replaced with a XS650 mini speedo with custom bracket, with the bars being swopped for LSL items fitted with stock switches and Posh grips. Also the headlight has replaced with a Harley Vintage bottom mounted unit with the indicators, ignition and rectifier all being reallocated as expected. 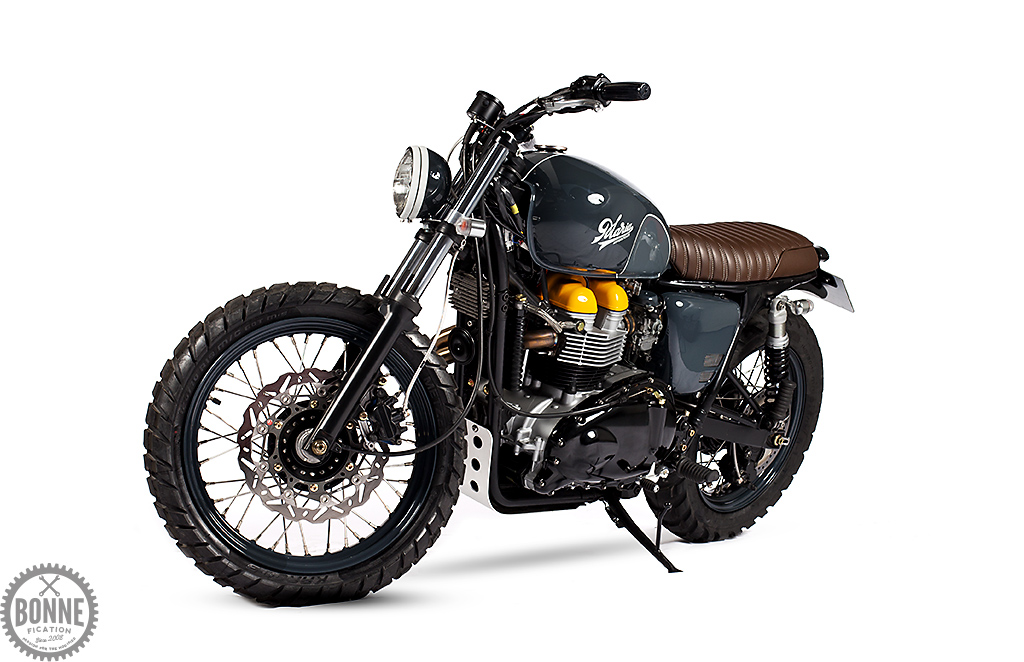 As I mentioned the client had four key request; Off-Raid tires, Better Shock, Better Braking and a cooler sounding exhausts. His need for off road rubber was taken care of by fitting the dual sport Metzeler Karoo 3’s both front and rear, a tire which gives the off-road  look with on-road handling. The dreadful OEM rear shocks which this Twin left the factory with back in 2001 has been upgraded to Ohlins which should go some way to improving the ride, which is now more important than ever with the fitting of those Metzeler’s. The brake upgrade was taken care of by fitting Breaking Wave Disc, which is a cheaper option then going all out when the budget doesn’t allow for a six pot calliper upgrade and do look great. 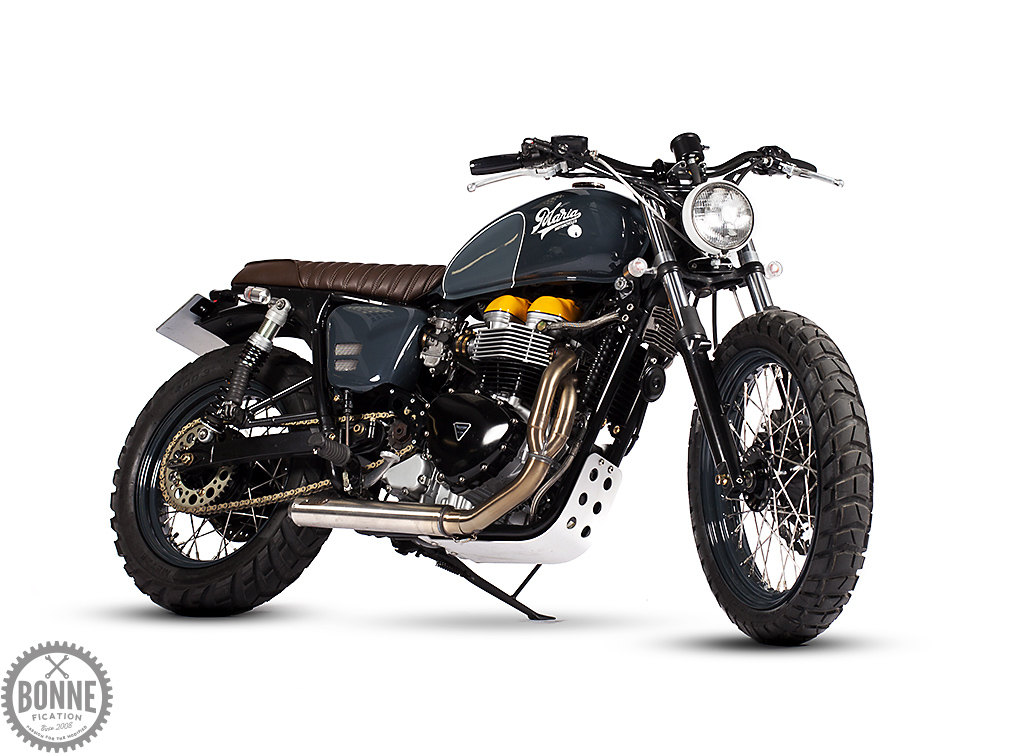 Lastly is the requested exhaust upgrade, many of you know the OEM pipes are rather mute, and to coin a phrase, they “Walks the Walk’ but don’t ‘Talk the Talk’ but that said, you also don’t want your twin to be too loud, its not a ‘V-Twin’ after all. There are plenty of great aftermarket pipes on the market, many of which have no issues scraping through the UK MOT test. One such pipe is the none Homologated  Zard 2>1 Cross which has been fitted here.

The Zard Cross is a great sounding pipe and is perfect for a ‘Scrambler‘ styled Twin as they do give a nice dirt bike sounding burble. I have these exhaust fitted to one of my own bikes and found them easy to fit, though you will need to blank of the Lambda sensor holes as Zard only seem to make one header to fit both EFI and Carb model Twins. I also found that the bottom spring clip was a little long and dangled about rather than having any tension. Other than that, they are a great sounding and great looking pipe. 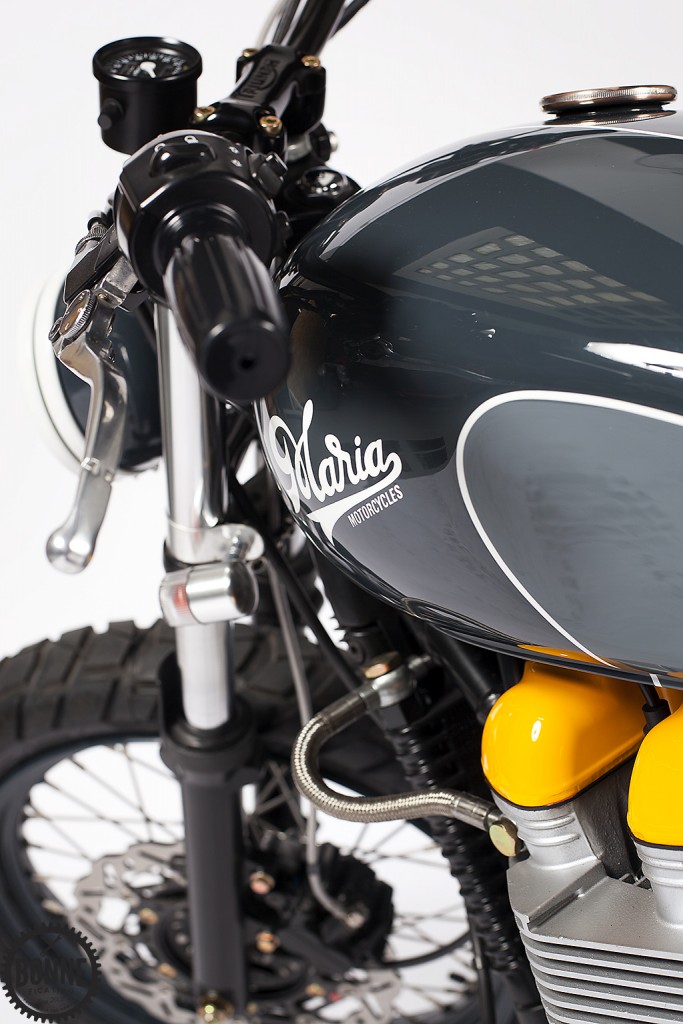 Finishing this Bonneville off is a fetching two tone WWII German Military inspired paint job with Maria graphics – the tank has been topped off with a stock petrol cap which has been polished down to the copper.  Something which is not too hard to do even by accident, so if you don’t like the finish don’t buff to hard. The stock side covers have been painted to match, but not before being modified with a set of mesh vents. 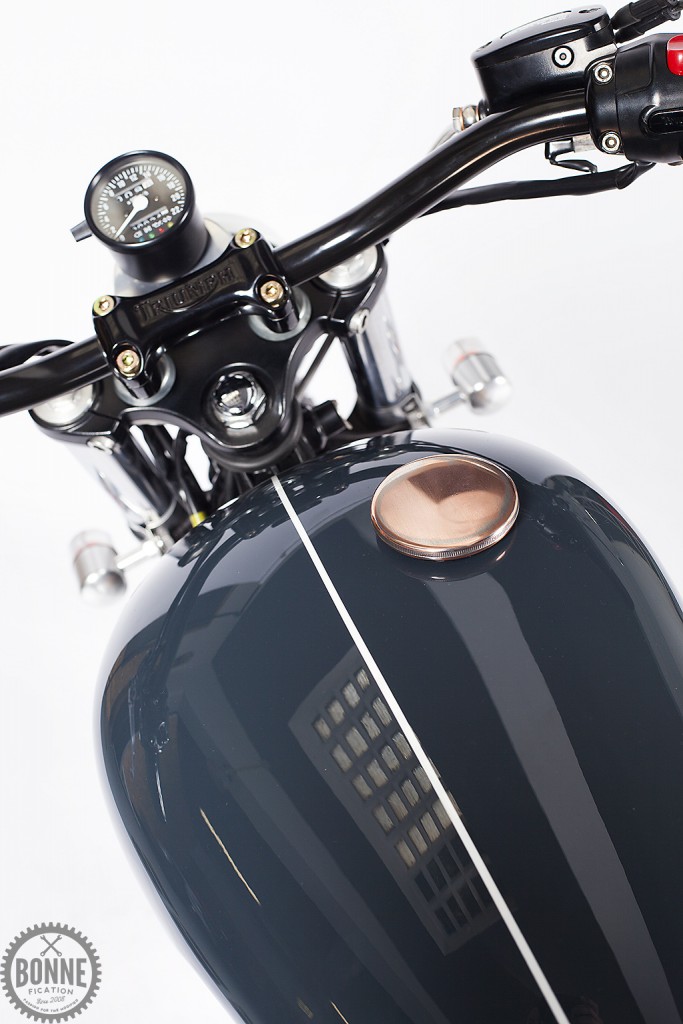 One nice detail on this build and something to consider when working on a bike of this age is getting the bolts and other goodies re zinc, as it does reinvigorate the look of the bike and this occasion the gold goes very nicely with that yellow cam cover.