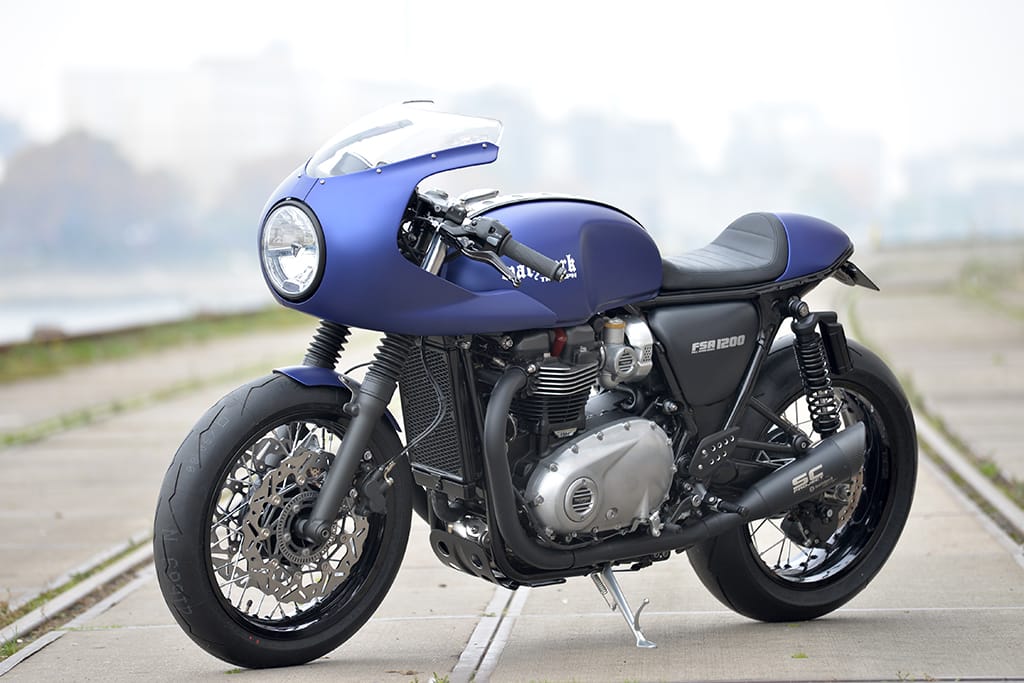 Not everybody thinks the new water-cooled Triumph Twins are still a little long… though I do, and so does Marcus Walz of Schwetzingen, Germany based WalzWerk Racing. Marcus recently sent Bonnefication his build based on the new 1200cc Thruxton, the length of which wasn’t the only thing Marcus dint like about the new machine, so in his words… 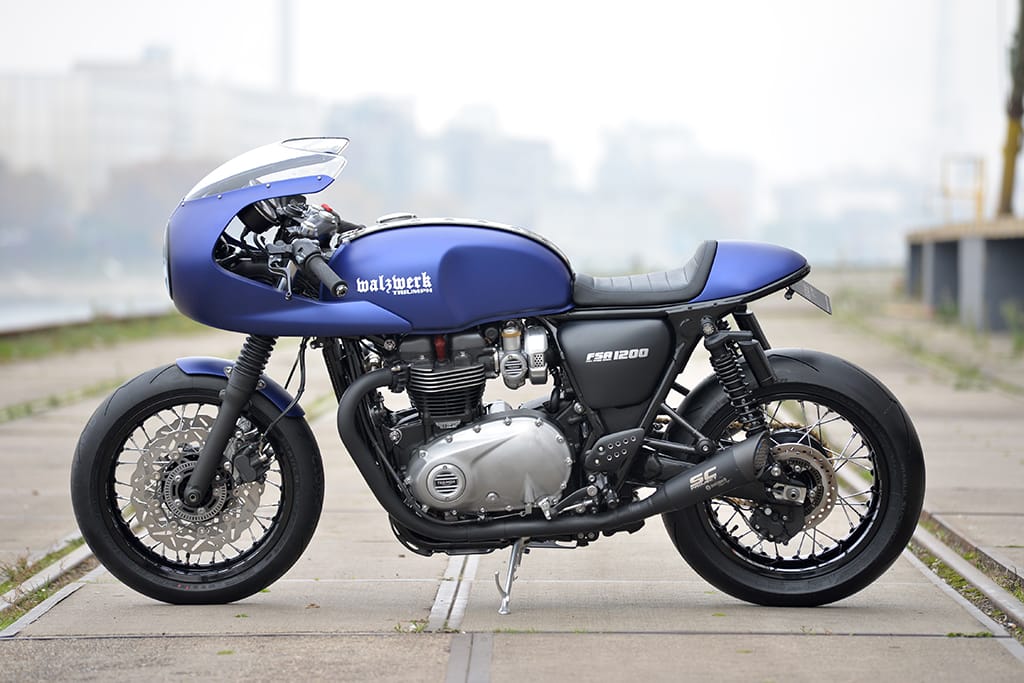 “The bike started it’s life as a brand new Triumph Thruxton 1200, not an R because I hate those f•^@n faked Öhlins Upside down Showa forks. And I think the bike looks much more classic with the conventional standard forks. But I upgraded the suspension anyway –  the forks are now equipped with Wilbers progressive springs, and on the rear we mounted a set of YSS full adjustable twin shocks. The fork were also lowered by about 20mm to give the bike a more aggressive stance”. 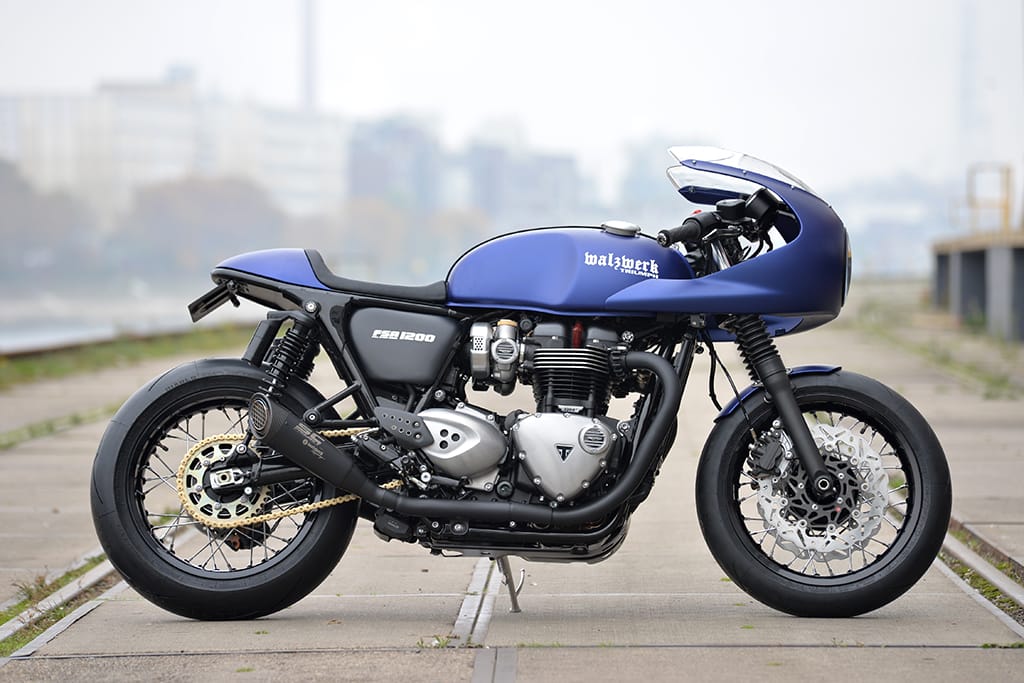 “We started this project taking apart the completely bike. Then we shortened the rear frame, and designed a new rear loop with an integrated LED tail light, before the frame went to the powder coater. 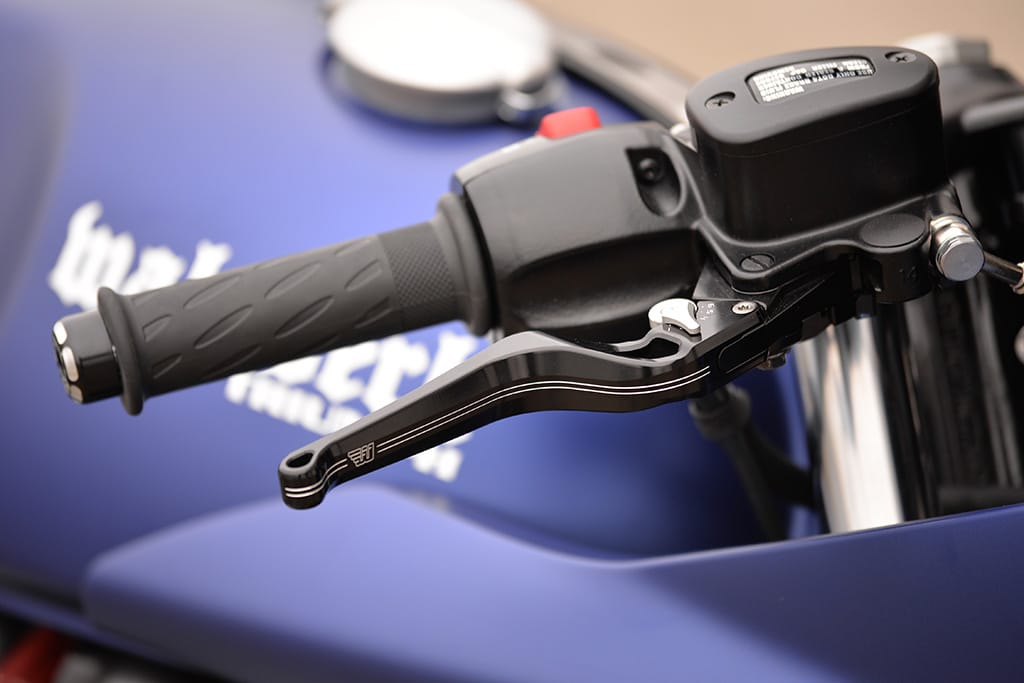 We then designed a complete new rear tail with a matching seat which follows the new rear frame. The tail section was shaped from a piece of  sheet aluminium, also the under-seat cover and the license plate bracket with the LED mini turn signals.” 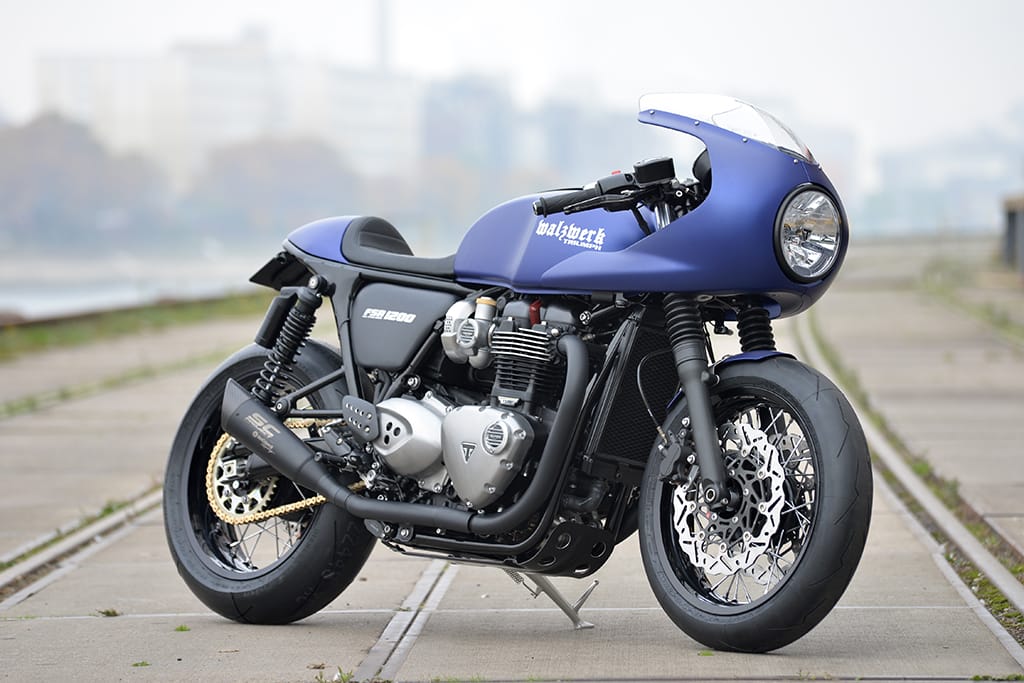 “Next step was to get rid of those huge and ugly plastic side panels. We fitted a set of aluminium side panels to fill out the left and right side of the frame triangle perfectly. We also fabricated the new side panels out of aluminium. So the whole rear section was now extremely narrow which gives the bike a total new look when you look from behind.” 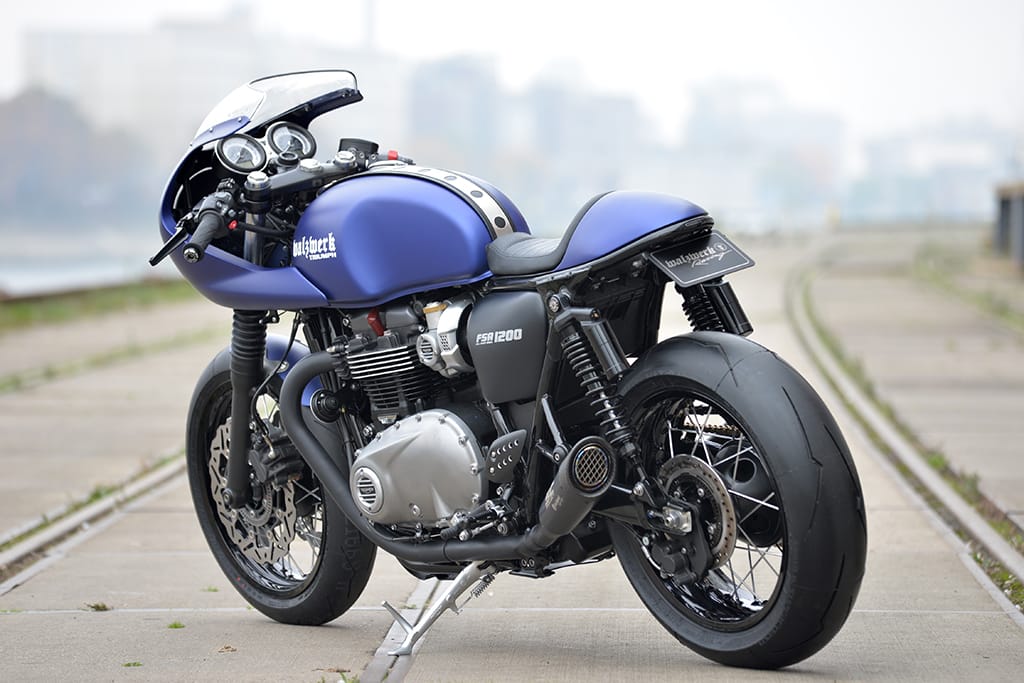 “For the front, we took the fairing which Triumph offers in their parts & accessory catalog. But when that thing arrived, we noticed it was huge like the stock side panels. 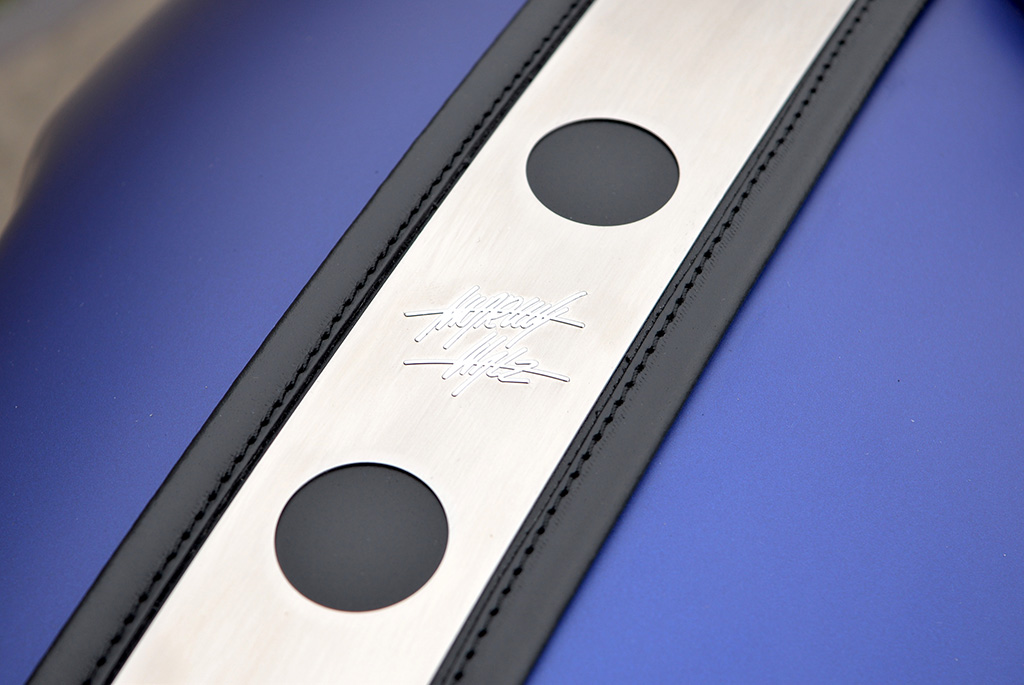 So we cut it here & there to make it more narrow, modified the fairing bracket so the fairing itself comes a bit more down. At the end we were pretty satisfied how the fairing came out. It now really matches the bike, perfect at any angle. A shorter aluminium front fender with new brackets finished the work on the front.” 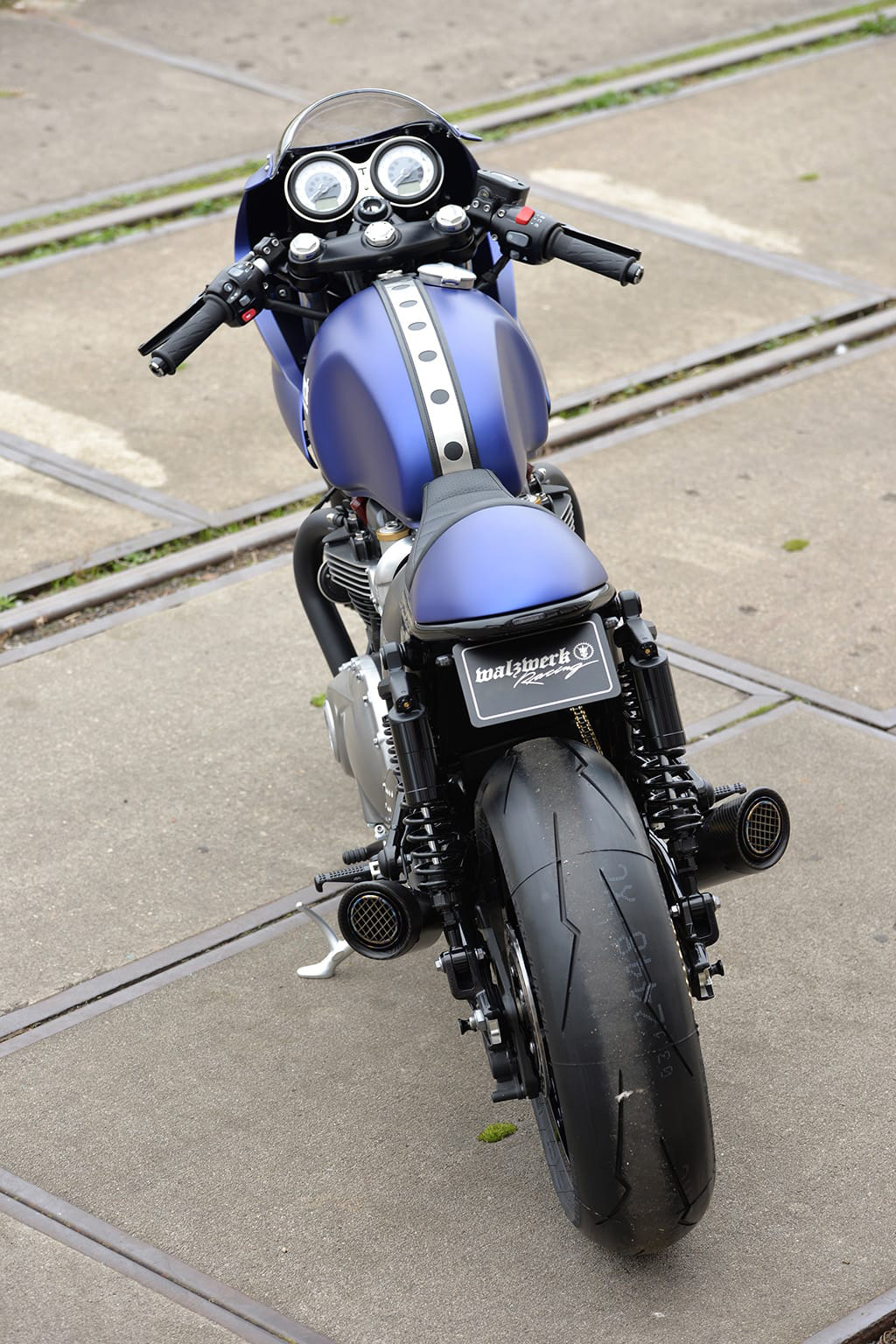 “When we had the mock up finished, it was time to take the bike on a trip to Italy. For many years our exhaust partner is SC-Project in Milano. They manufacture exhausts for our projects and builds, and of course also for our Thruxton. 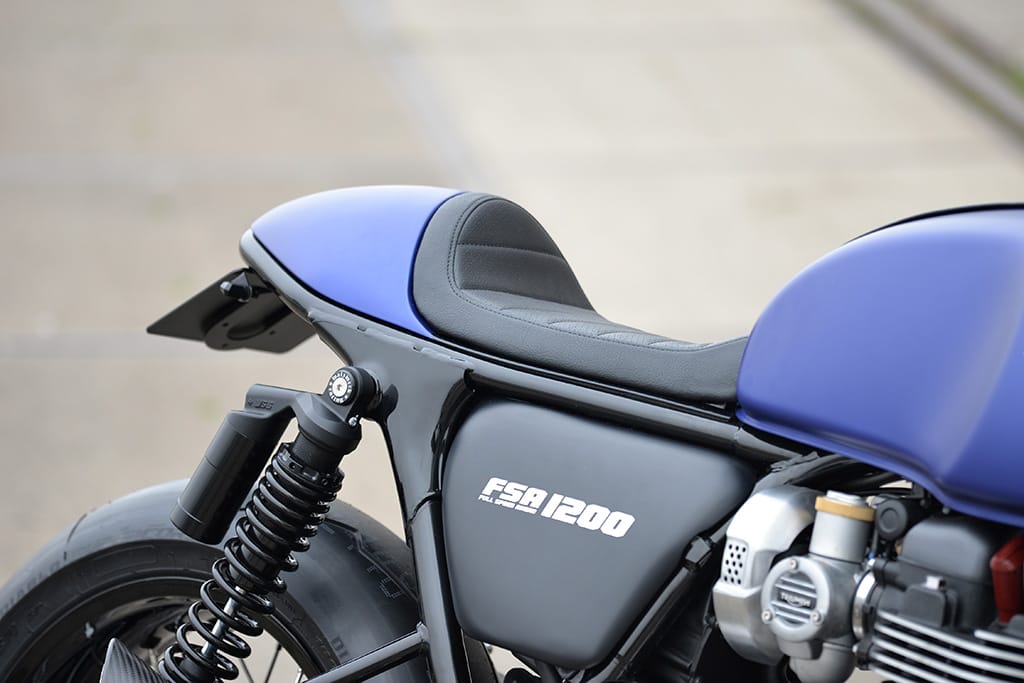 When it comes to performance I don’t make experiments. So a set of genuine MotoGP muffler were fitted to the stock headers and the full system got a ceramic coating in flat black. I decided to go with those modern muffler because I like it when you combine modern details with the classic look, but still let the classic look dominates.” 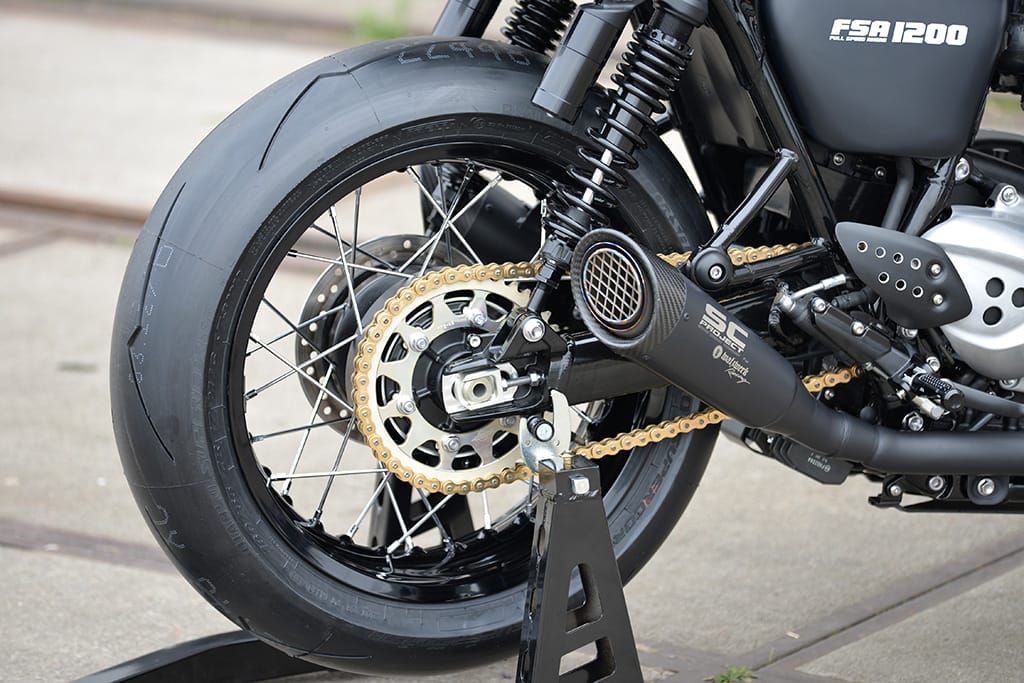 “The wheels are from Excel, high gloss anodised with stainless spokes and converted to tubeless, so we can run a set of Pirelli High Performance tires to use the bike sometimes also for track days 🙂 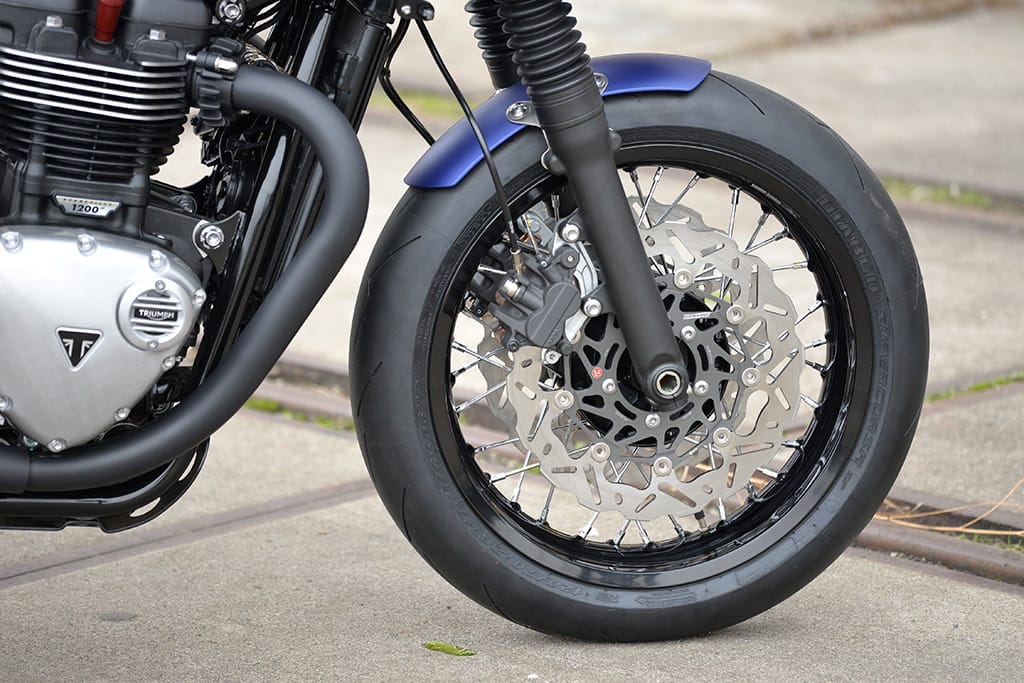 On the rear we modified the swing arm, so we can run a 180 rear tire on a 5.5“x17“ rim (stock is 160 tire on a 5“ rim). To have the power under control, we mounted a set of full floating Braking wave rotors in combination with a set of Pagid racing brake pads out of metal.” 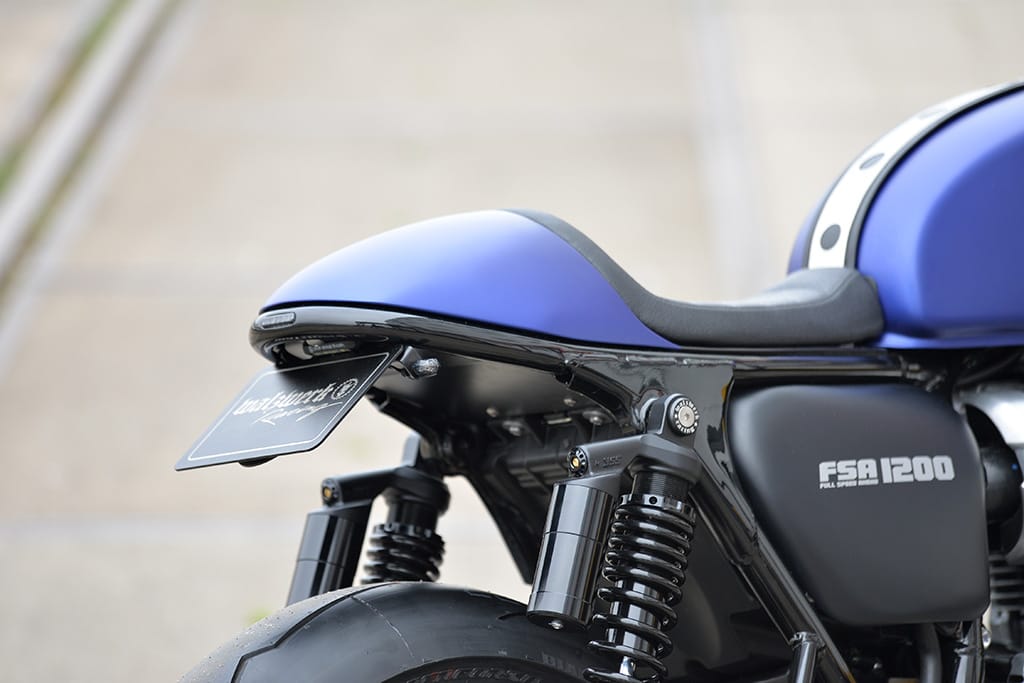 “The rotors needs to be modified, because there are no after market wave rotors available yet, so this ones are actually for a Triumph Daytona 675. A K&N racing air filter and a power commander V lifts the horse power to around 110hp in combination with the SC Project exhaust and a modified fuel injection. 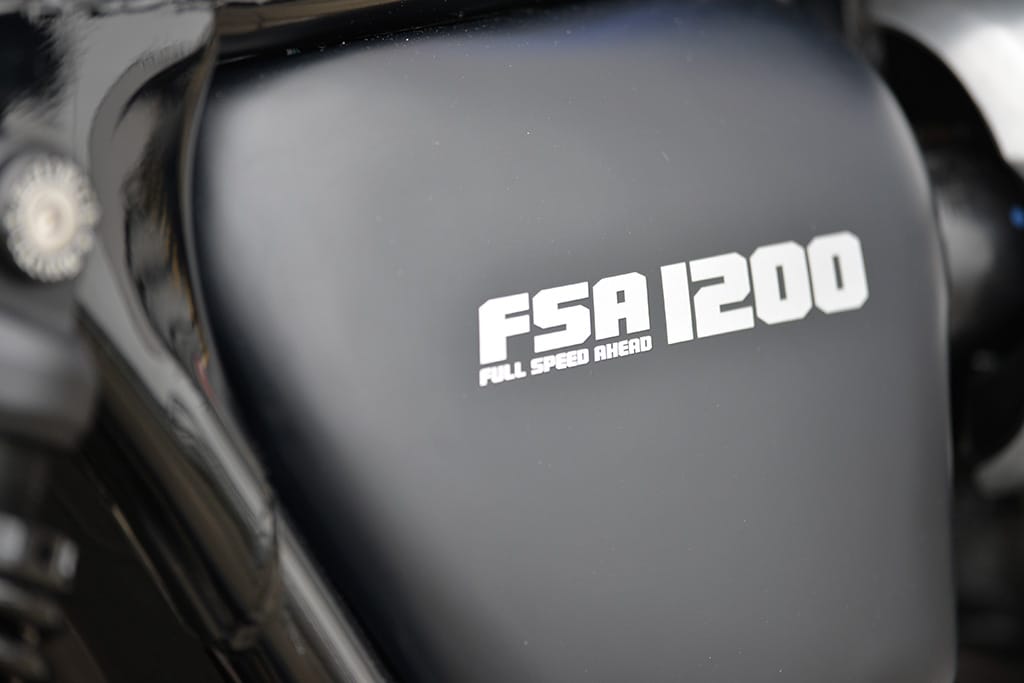 Last but not least we converted the heavy 525 secondary chain drive to a 520 racing set-up with 520 EVR3 racing chain in gold, a special machined 520 aluminium chain wheel and a 520 racing SuperSport sprocket. “ 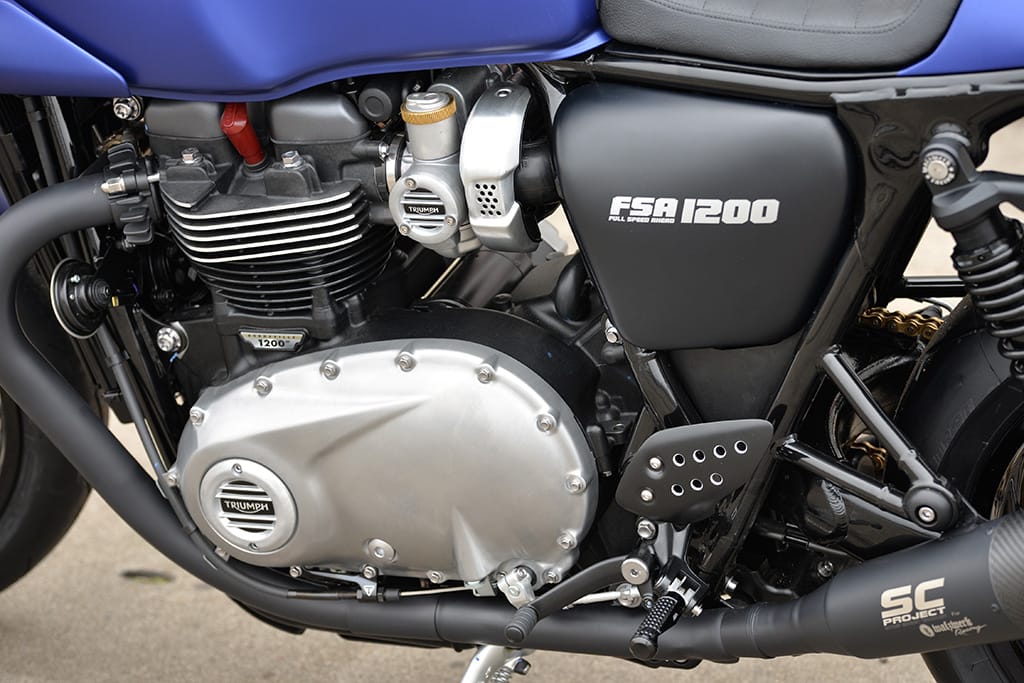 “The rear sets and the full adjustable brake- and clutch levers are from ABM in Germany, the handle bar weights are a WalzWerk-racing production, so are the upper shock mounts.  The bike drives and handles like a dream and you are really addicted to it right after 1 minute. We haven’t built the bike for a customer, we’ve just built it just for fun. So currently the bike is for sale. We’ve launched this bike last month on the INTERMOT in cologne and it was really a huge success. The bike was voted as the best Triumph on the whole show!” 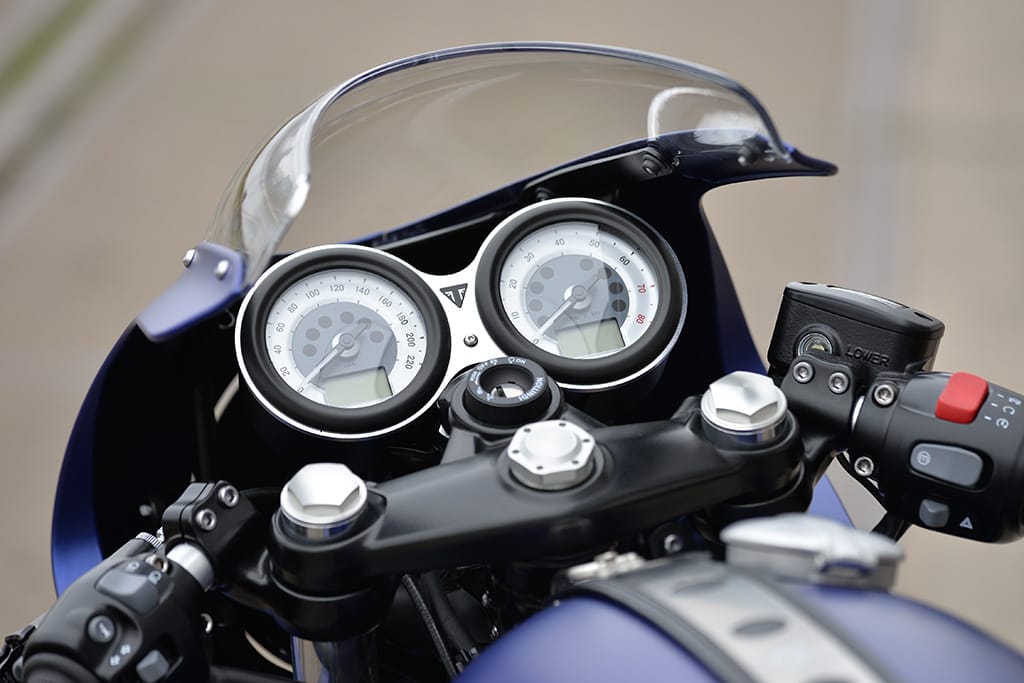