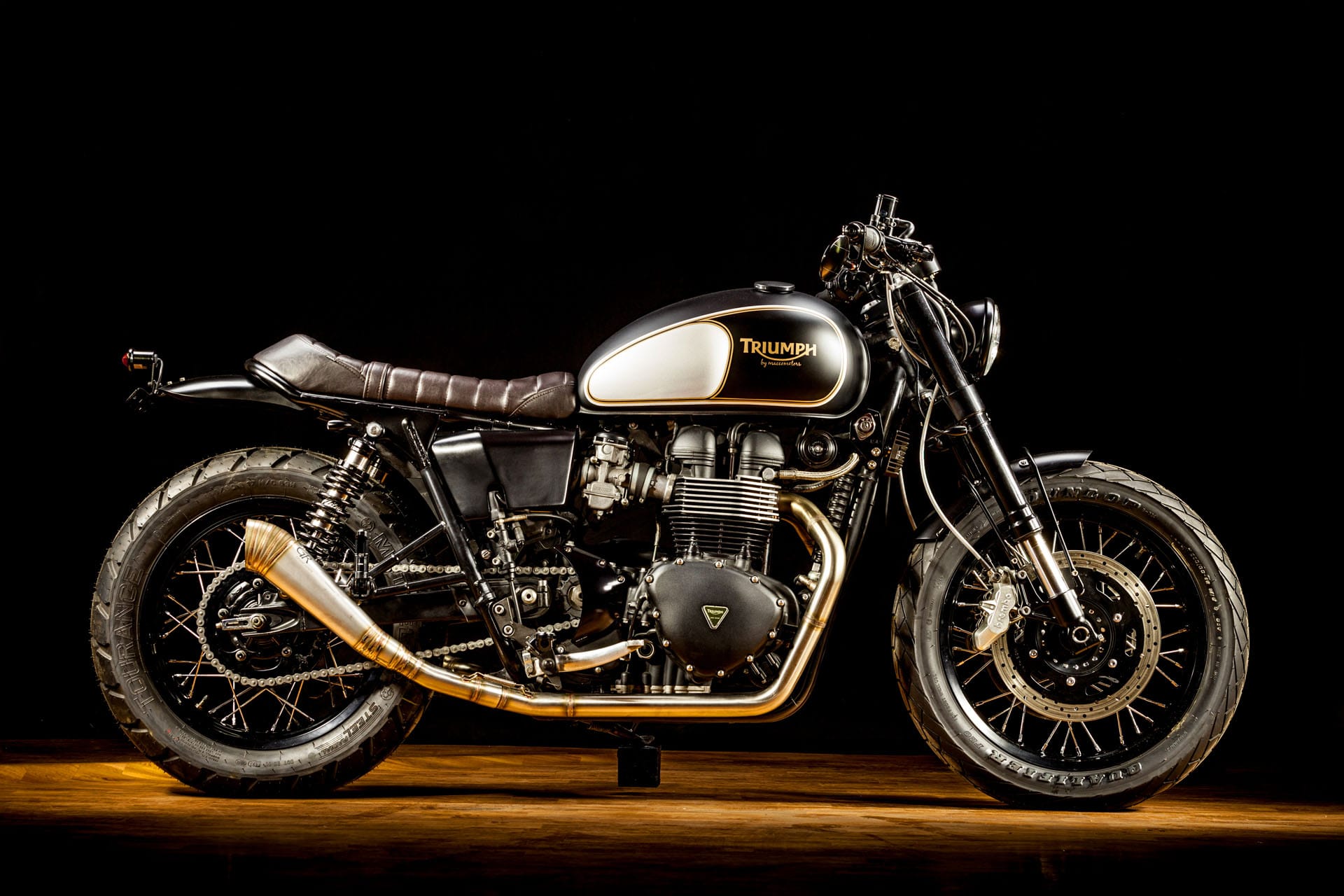 Jose and Tito of Macco Motors need no introduction, there work appearing on Bonnefication on a regular basis, and for good reason, there work is second to none. The latest build to hail from their Cádiz workshop is the ‘Heartbreaker’ (Hmmm two bikes in a row from Cádiz, something in the water perhaps!) a build based on a 2009 EFI T100, which had a mere 10km (6k miles) on the clock. 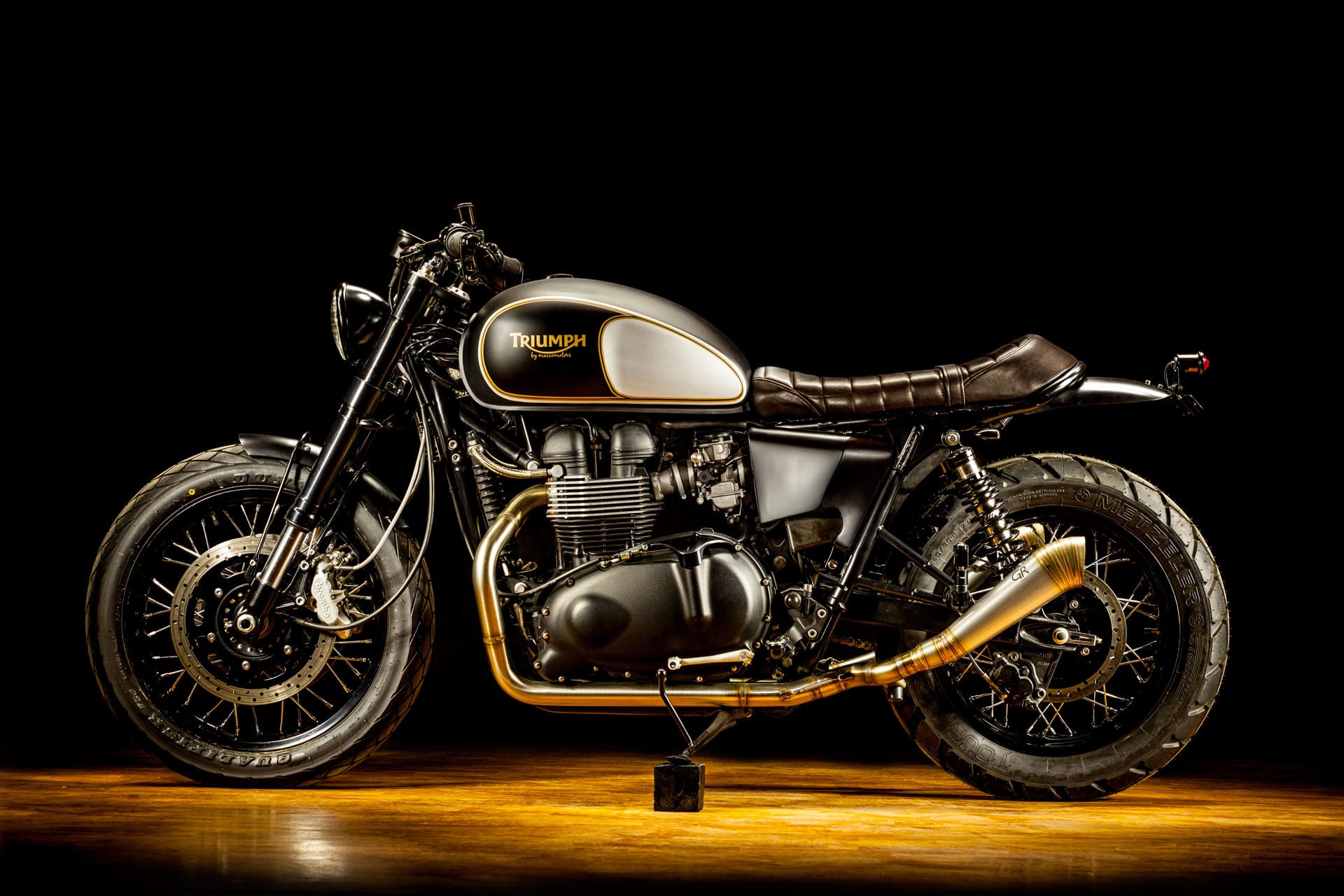 Unlike many of Jose and Tito’s builds, the Heartbreaker wasn’t built for a client thousands of miles away, but for the launch of Hollywood star, and fellow Spaniard Antonio Banderas new clothing range, which he was releasing in collaboration with clothing brand Selected Homme. 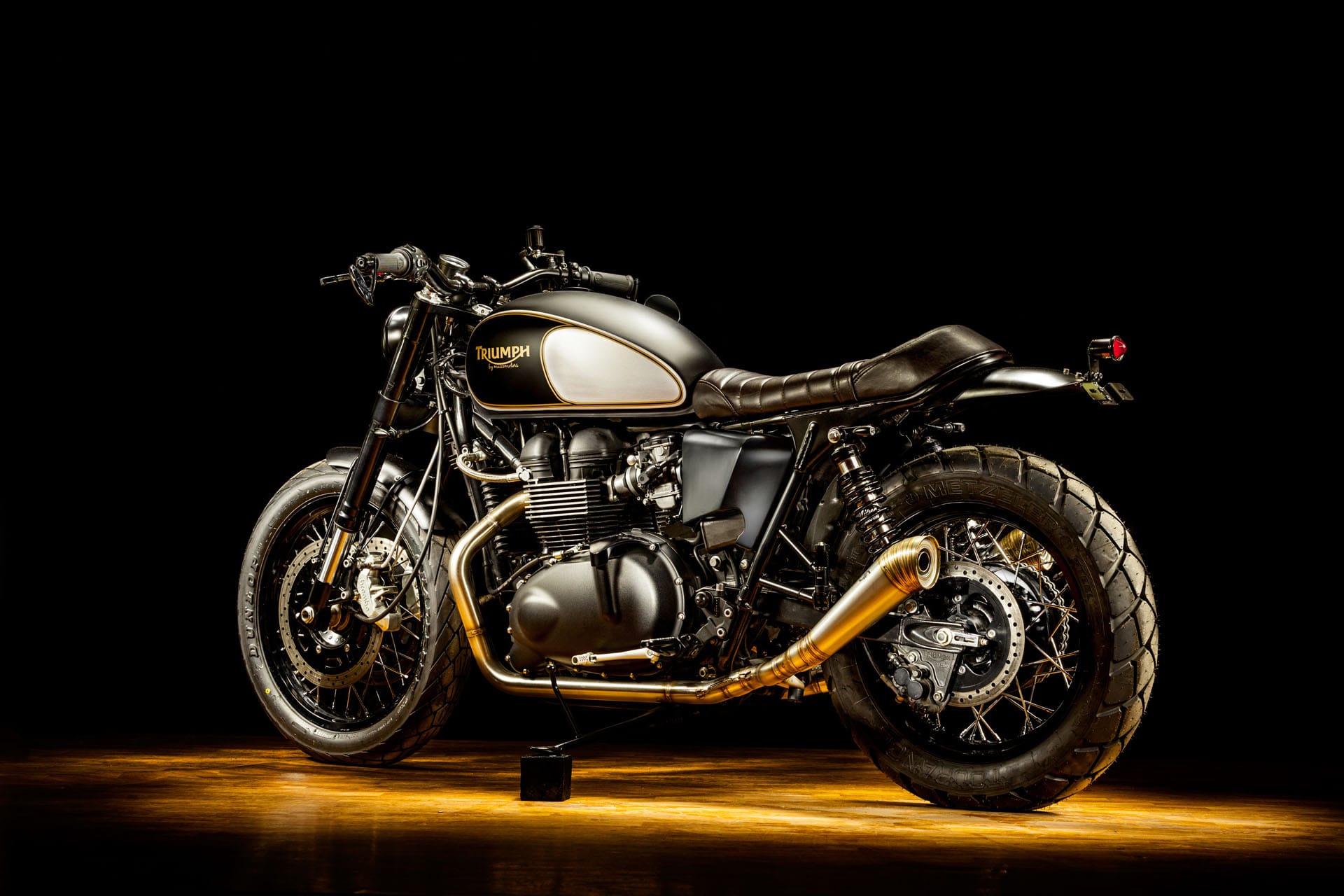 To mark Antonio’s debut in the ‘rag trade’, Selected Homme put on a little shindig in Puerto Banús, some 167km up the coast from the Macco workshop. But something was missing – and that was a slick custom motorcycle. Without hanging about, the chaps and chapettes a Selected Homme approached Jose and Tito for a little favour, and of course they jumped at the opportunity.

“We need to say that we had the chance to have a chat with AB about bikes (he owns only eight motorcycles) and it was fun, a really close and friendly person. This guy really loves bikes and felt in love with our design” 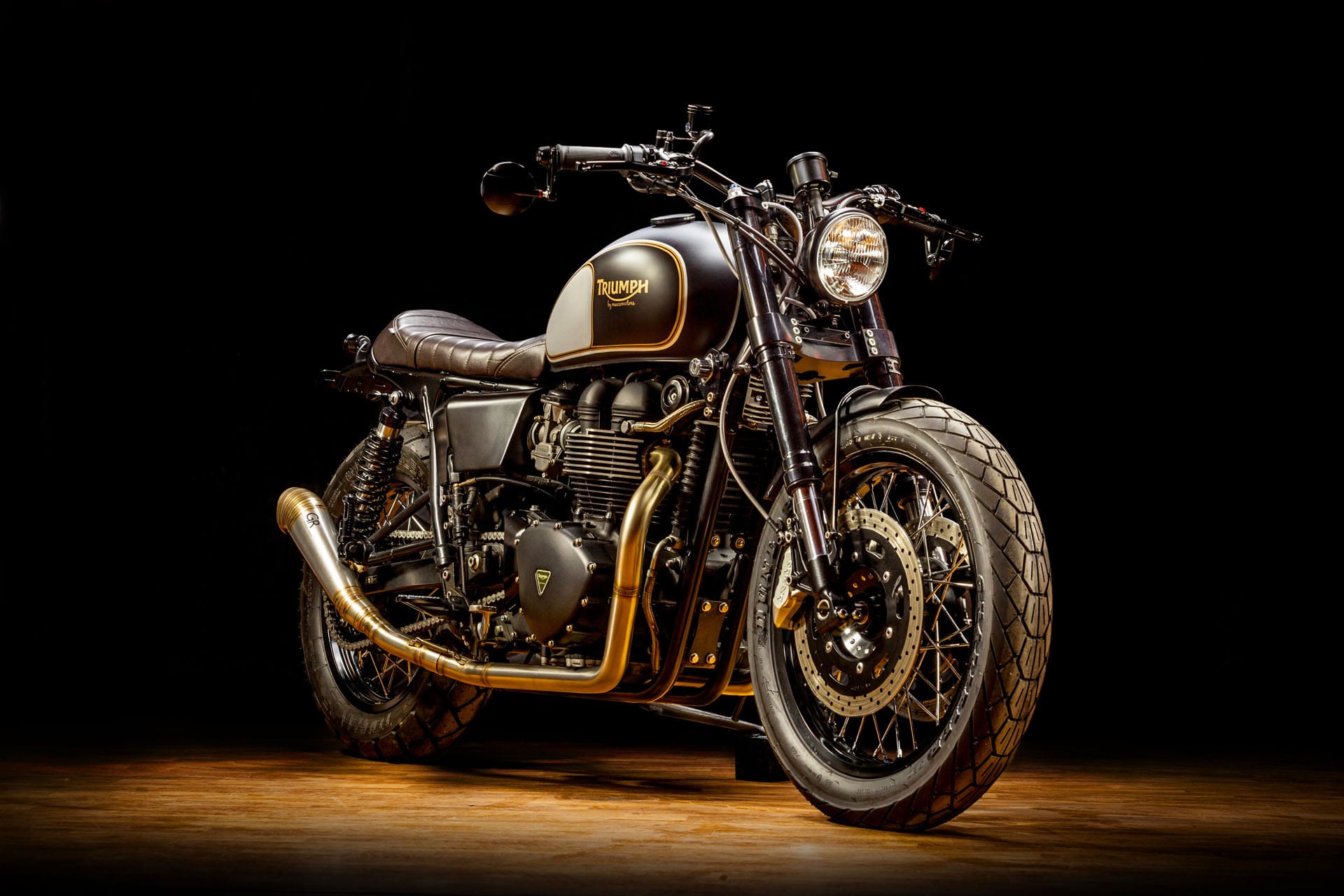 What Jose and Tito have produced is one seriously cool and well put together Triumph Twin – from front to back its typically Macco Motors – frame is looped, custom seat, shorty rear mudguard, retro tail light and classic Macco fibreglass side-covers. Colour scheme is also typically Macco motors – though on this occasion the tank was painted twice, once for Mr Banderas’  press shindig when it sported the AB clothing logo, then again to the current scheme once the press event was over. 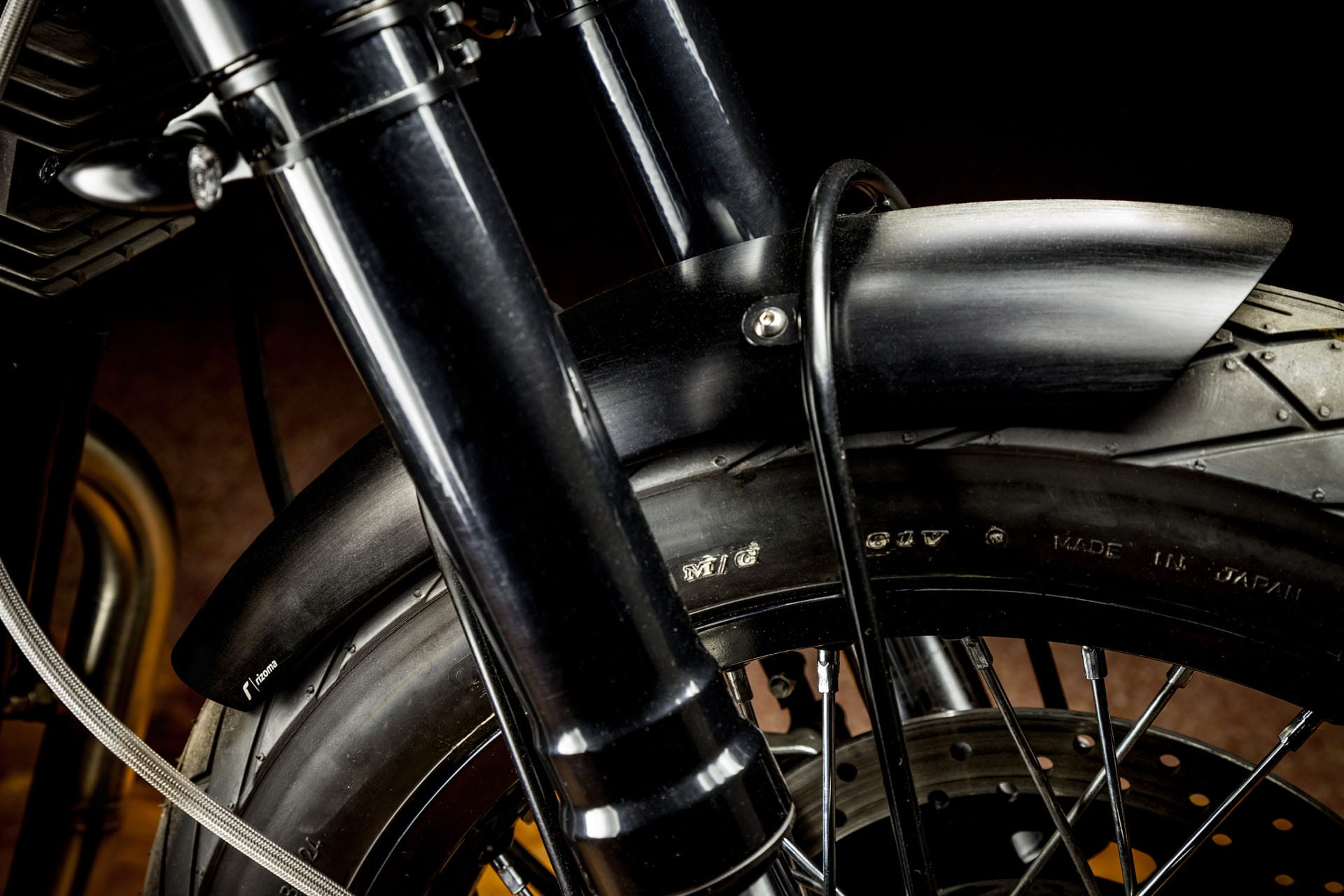 Up front the T100 has been fitted with brand new Ducati 749 USD forks, grafted to the Bonneville using the Free Spirits triple tree. The front mudguard is an off-the-shelf item from Rizoma, fitted to the USD forks using modified black Ducati mudguard bracket. 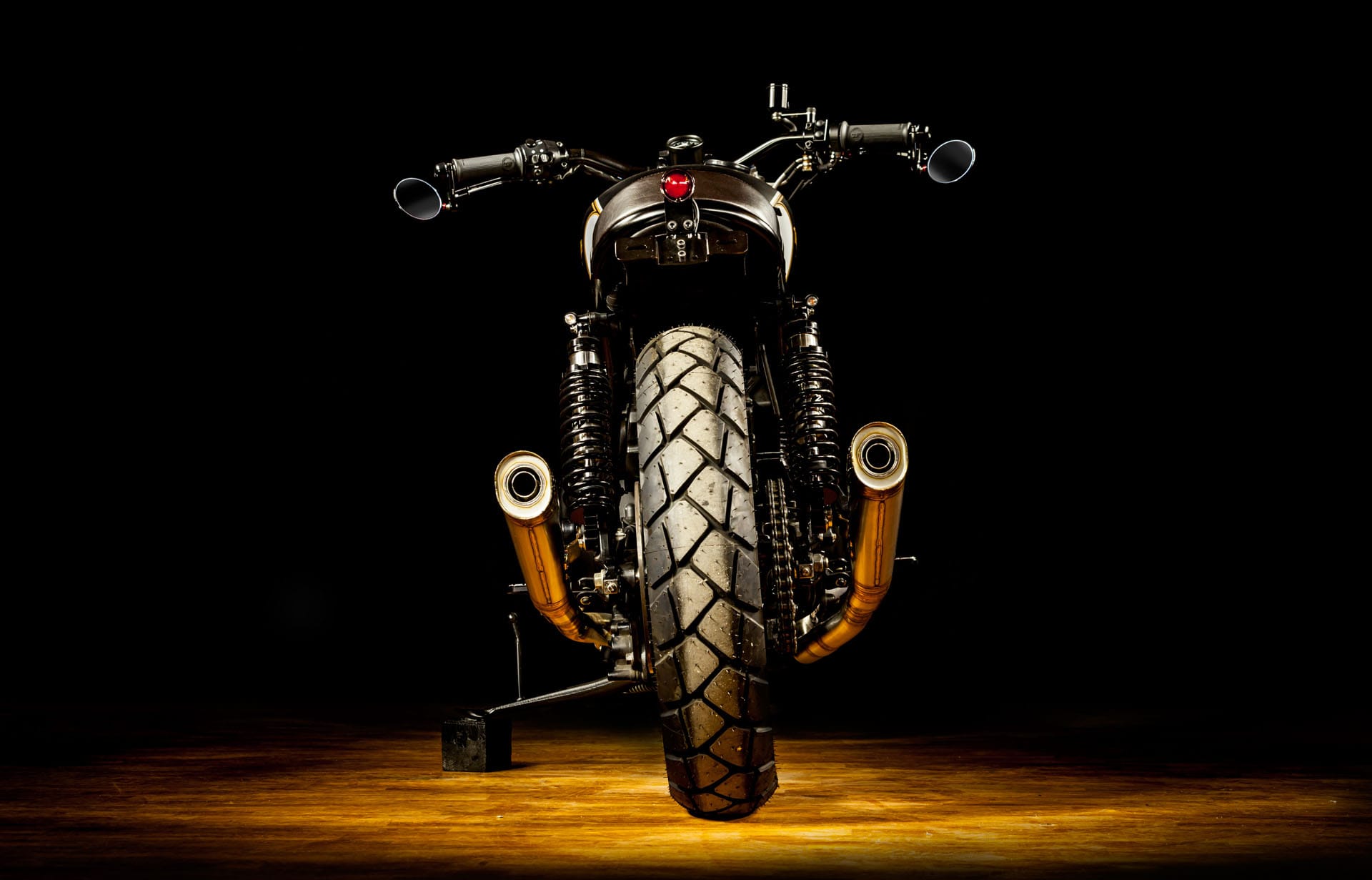 With those Ducati forks came the opportunity to fit double Brembros, fed by a Nissin master cylinder. A new double disc hub was needed, which was laced to a 18” Thruxton rim, shod with  Dunlop F20 tire, paired with a Metzeler Tourance 140 at the rear. 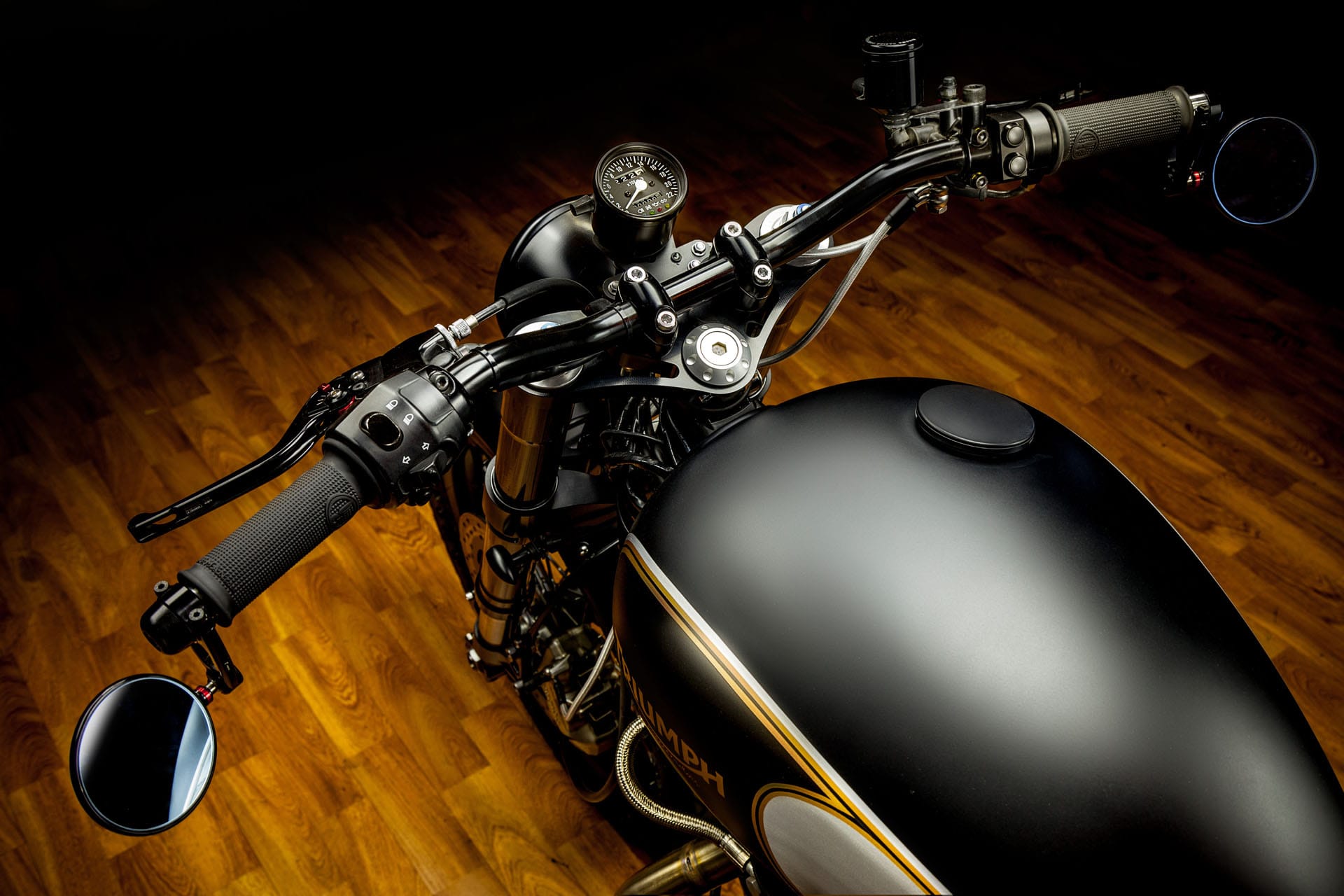 Handlebars are the 30.5” wide (2.5” pullback) Biltwell Tracker bars, fitted with an OEM light/signal switch , along with a Motogadget m-switch acting as the ignition button. The stock levers are gone, replaced by a set from Rizoma  – who also supplied the brake Fluid reservoir and bar end mirrors  – finished the bars off are a set of  LSL Clubman grips.

Its no surprise that the bloated dials have been replaced, and less of a surprise that its with the ever popular XS650 style mini speedo, mounted to the T100 via a custom bracket, under which is a Bates style bottom mounted headlight.

The parts from the Rizoma catalogue of accessories continues, all of which are well worth a mention and include; Gas Gap, Choke knob, Sprocket Cover,Crab Tops for the Injectors (fake carbs) a very nice Clutch cover for the engine, turn signals and front and rear pegs.

Finishing the build off is a custom GR Exhausts Systems, Hagon rear shocks… oh and a LSL ignition relocation bracket….no idea who made the rectifier relocated or any of the other bracketry, but I’m sure you can guess. 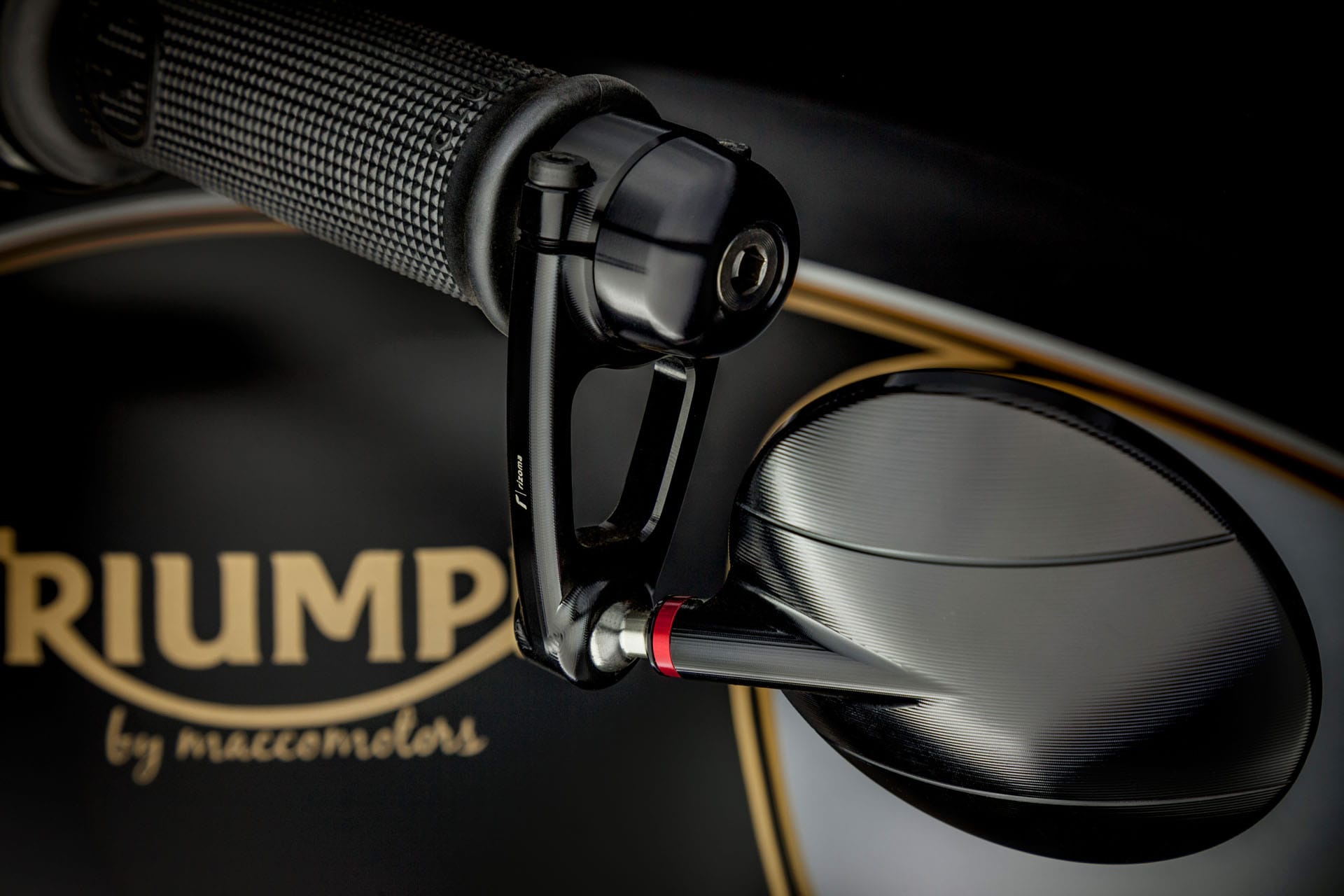 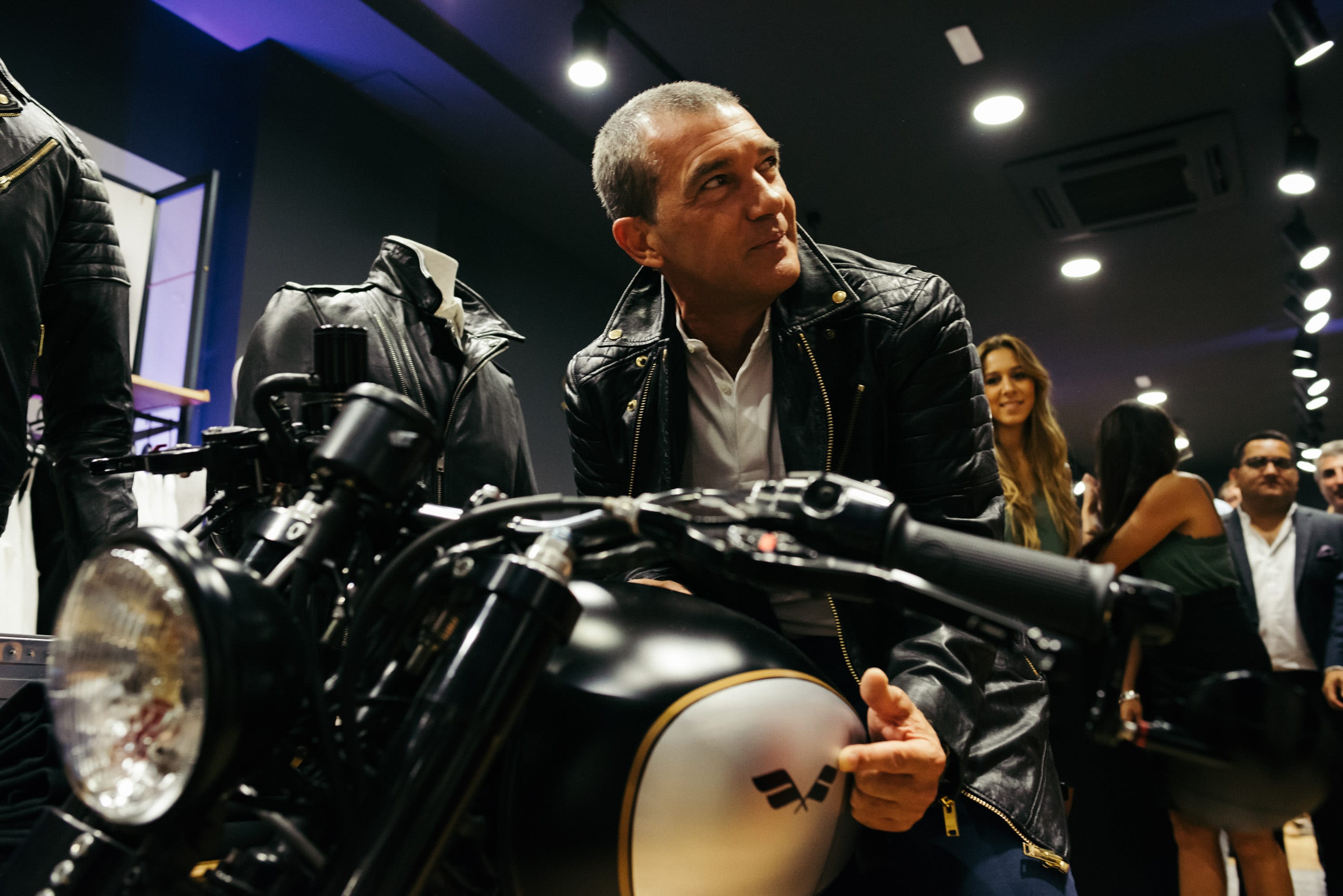 Next
COOLmotorcycles – 2016 Street Twin ‘The Viking’