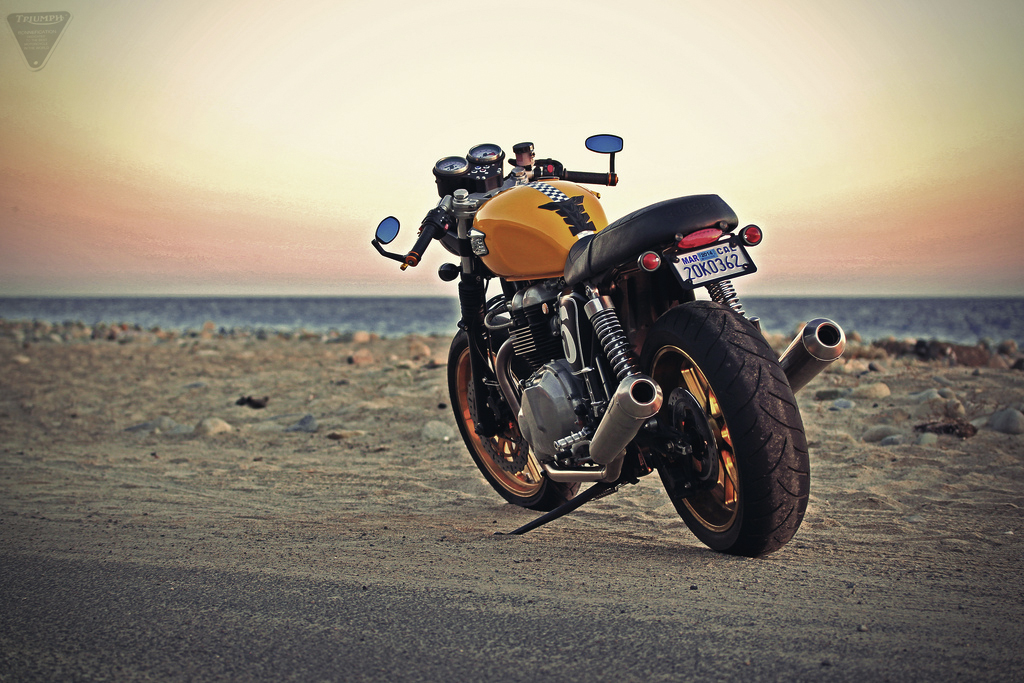 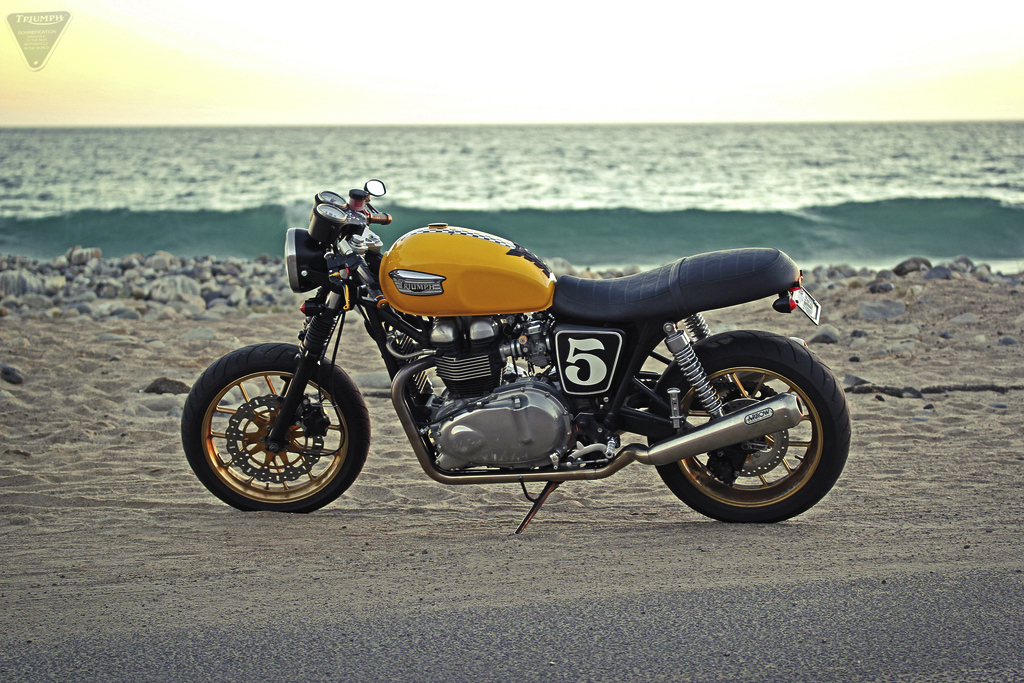 This Thruxton, the colour of which I feel really suits the California surroundings, belongs to 24 year old Steven Kim a Radiologic Technologist (he takes X-Rays) from La Crescenta, California. Steven loves the 05 Triumph Thruxton as it’s a real ‘head turner’  he admit, receiving admiring glances and comments wherever he parks it up. Yup…. you guessed it, many of which are from people who are surprised the Thruxton is a modern machine. But nethertheless, they are still more than eager to share their experiences of the bikes they rode back in the sixties,  ah…happy times!

Before owning the Triumph Steven rode a Kawasaki Ninja ZX6R and was looking at getting a Daytona 675R as his next ride. But it’s funny how things turn out – A friend of Steven’s had just purchased a Thruxton and like many of us Triumph enthusiasts was willing to share that passion. Poor Steven didn’t stand a chance and fell in love with the Triumph instantly… 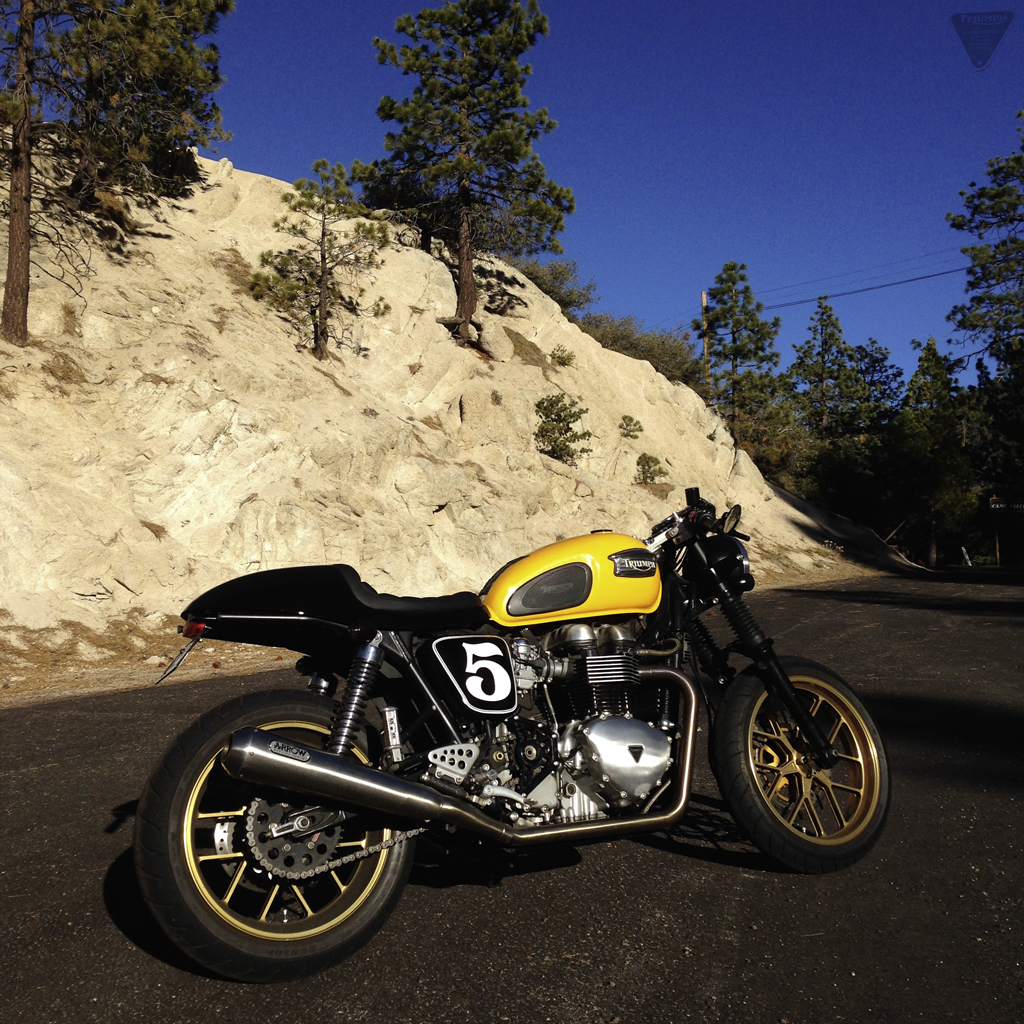 “I love about the Thruxton is that you look and feel like you’re going fast when you aren’t It’s never a dull moment riding it whether you’re in low or higher speeds. Lastly, the parallel twin just sounds badass!”

Surfing the classifieds the o5 Thruxton was found with just 4,700 miles on the clock and was eagerly purchased. You can’t ride all the time (it’s exhausting) so when Steven wasn’t zapping people with X-Rays or riding the California roads, he spent his remaining time perusing TriumphRat, looking for idea’s [should of come to Bonnefication, instant fix] 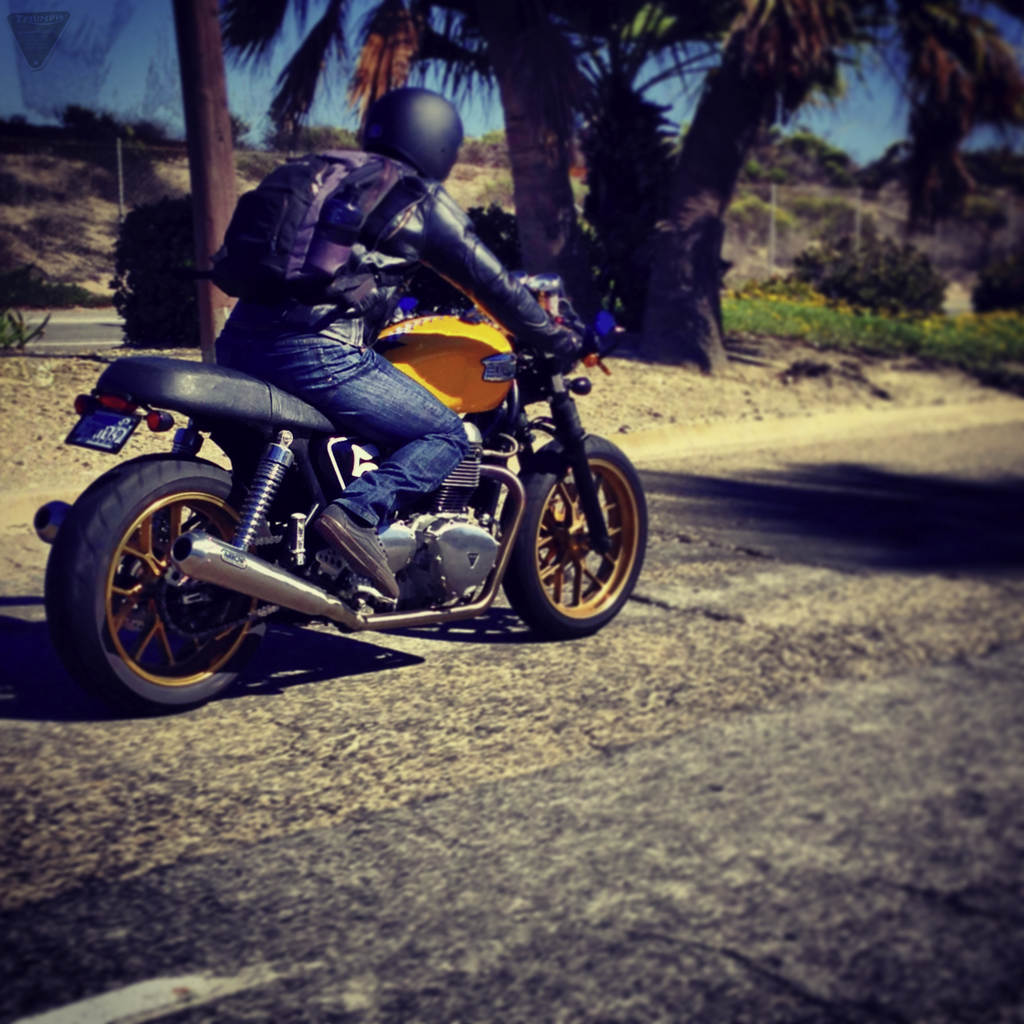 These images, taken by friend Steven Christie, show the results of Stevens K’s labours. Recently an 8Negro Jarama Solo Seat was added to complete the Cafe look, which can be swopped out for the stock item when Steven needs to carry a pillion. The bike now sports parts and accessories from right across the range including products from Arrow, Joker Machine and British Customs. I think you will agree, this Thruxton looks great and I for one envy that California sunshine.

“I’m very lucky to live here in Southern California where the riding weather is abundant. Some places I enjoy riding are Angeles Crest Hwy, Mulholland Hwy, Pacific Coast Hwy, and even just around town with my buddies. People always ask why I ride and I always tell them that as corny as it sounds, it’s a whole different world on two wheels.”

So whats been done…..

Previous
The Bike of Eli