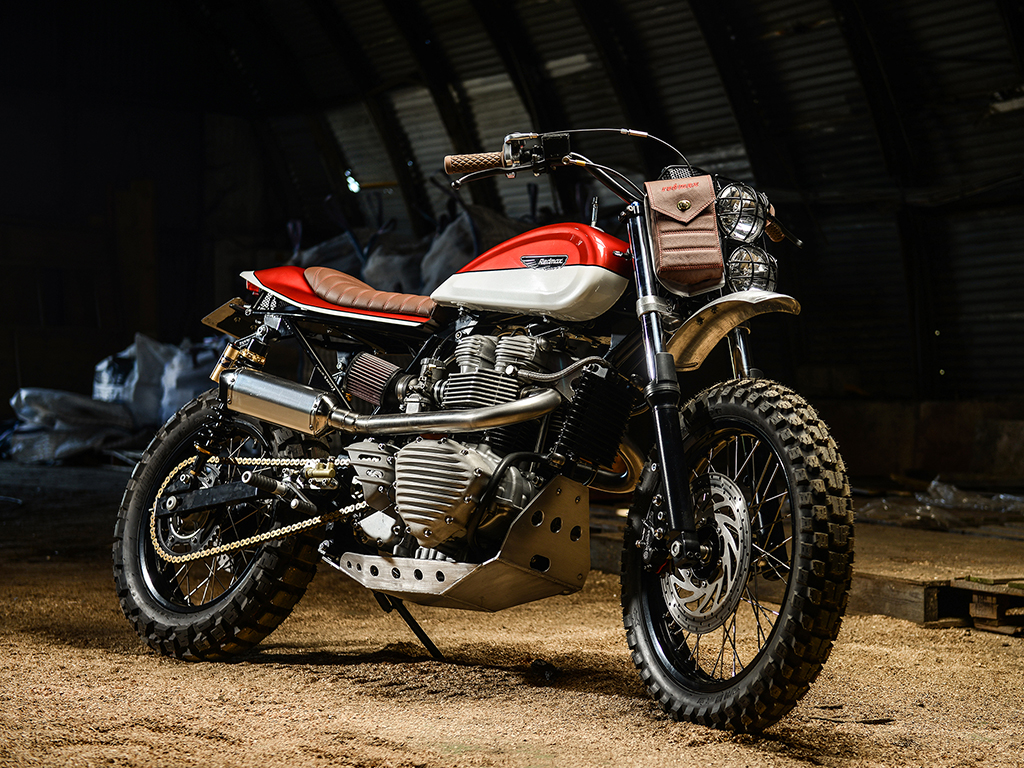 I’ve known Steve at Redmax Speedshop since 2009 when Bonnefication was in its founding years. Back then I not only wanted to build my own 865cc Triumph Street Tracker but also to try my hand at Flat Track racing here in the UK. For my own safety, but mostly that of the other racers, I chose to focus on blogging and building a Triumph Street Tracker, and it was Steve at Redmax who I turned to for parts. 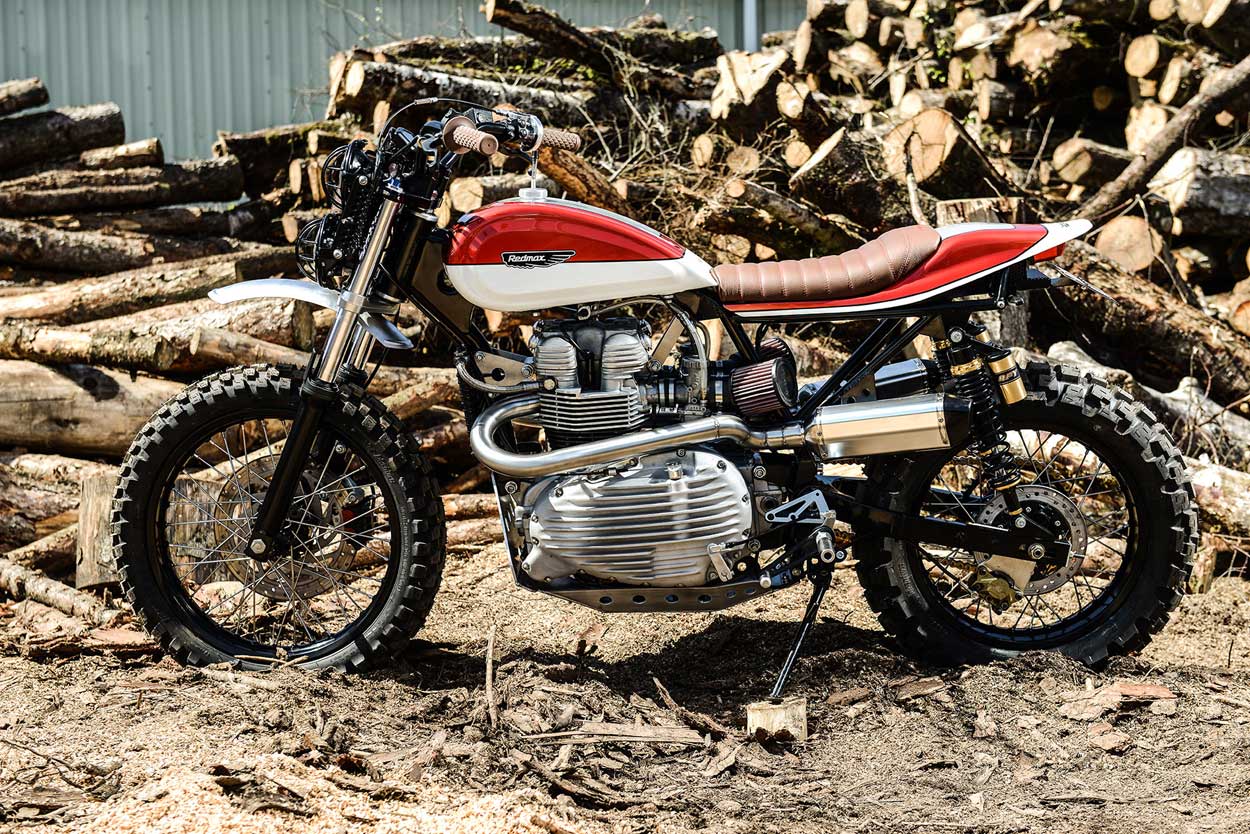 Over the next decade, I met up with Steve at the Bike Shed on various occasions and continued to follow the builds rolling out of the Redmax Speedshop with keen interest. An interest that was piqued when Steve tagged me in an image of the early stages of his latest build. A build based on his very own Redmax Tracker frame, a frame designed specifically to house the Hinckley Twin engine! 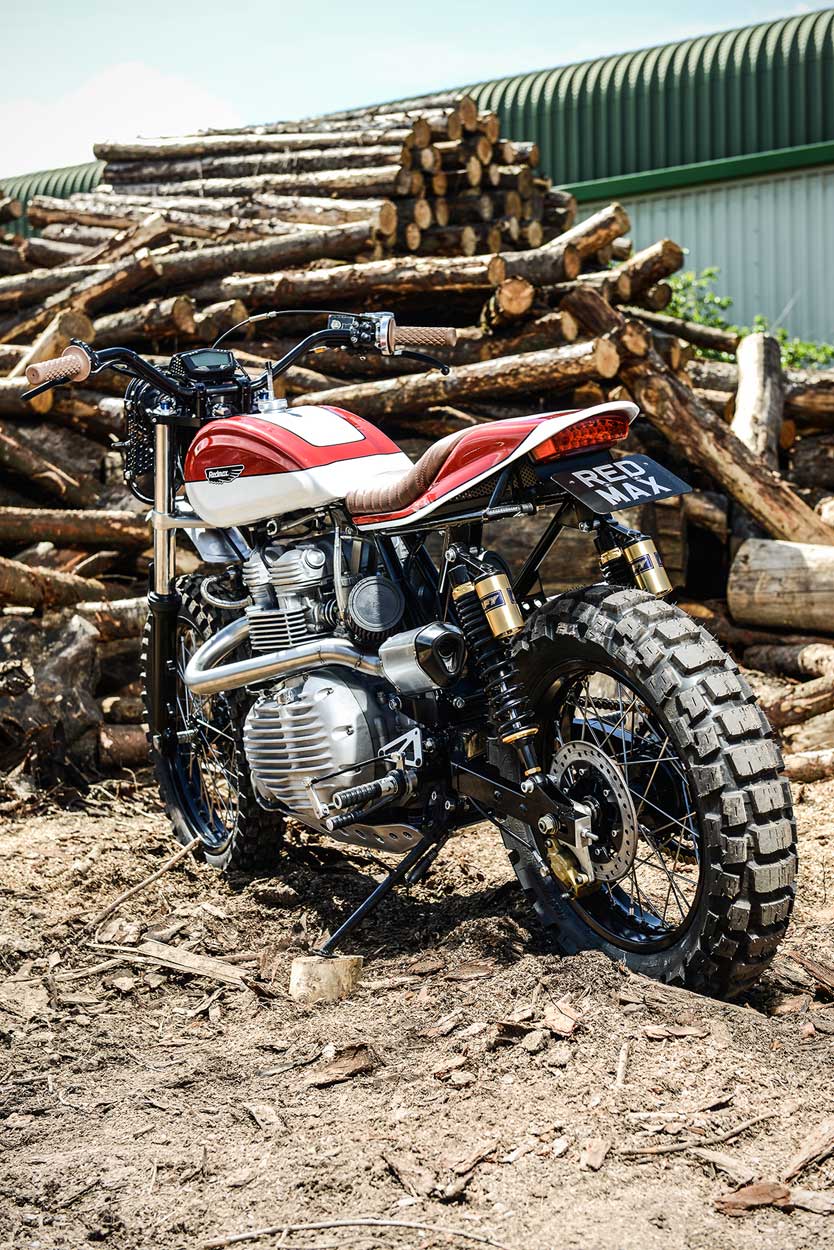 That build was to become known as the Knobbler and was commissioned by Andy, who Steve had built a Triumph Tracker for five years previously. Though on that occasion the Tracker had been based on a classic Triumph T120. In the intervening five years, Andy’s knees decided that kickstarting that Triumph Tracker was no longer an option. 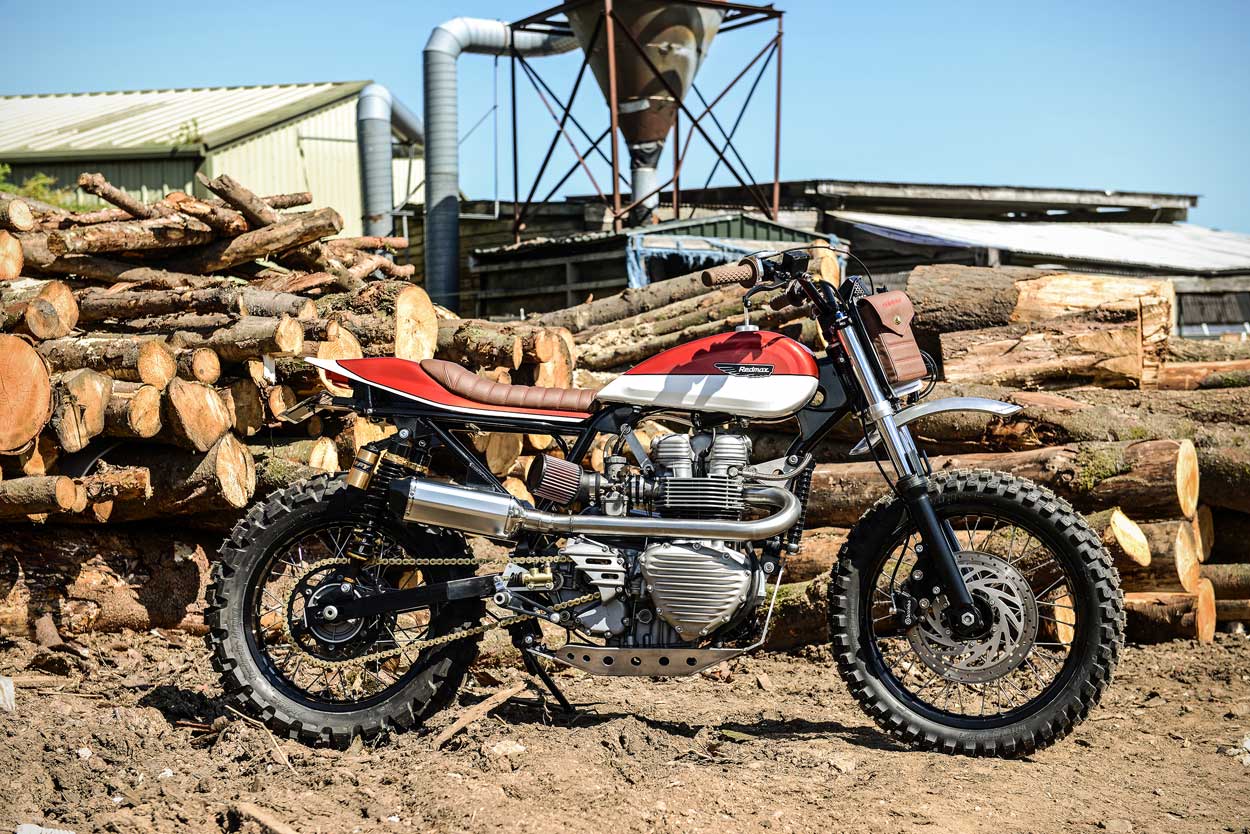 Andy came back to Steve at Redmax with a new brief, this time to build him a modern road/off-road going Triumph Tracker/Scrambler, that not only needed to be fit for the roads of Southampton, but also the green lanes of the Hampshire countryside. (with all the pot-holes in those Hampshire roads, this bike should be perfect!) 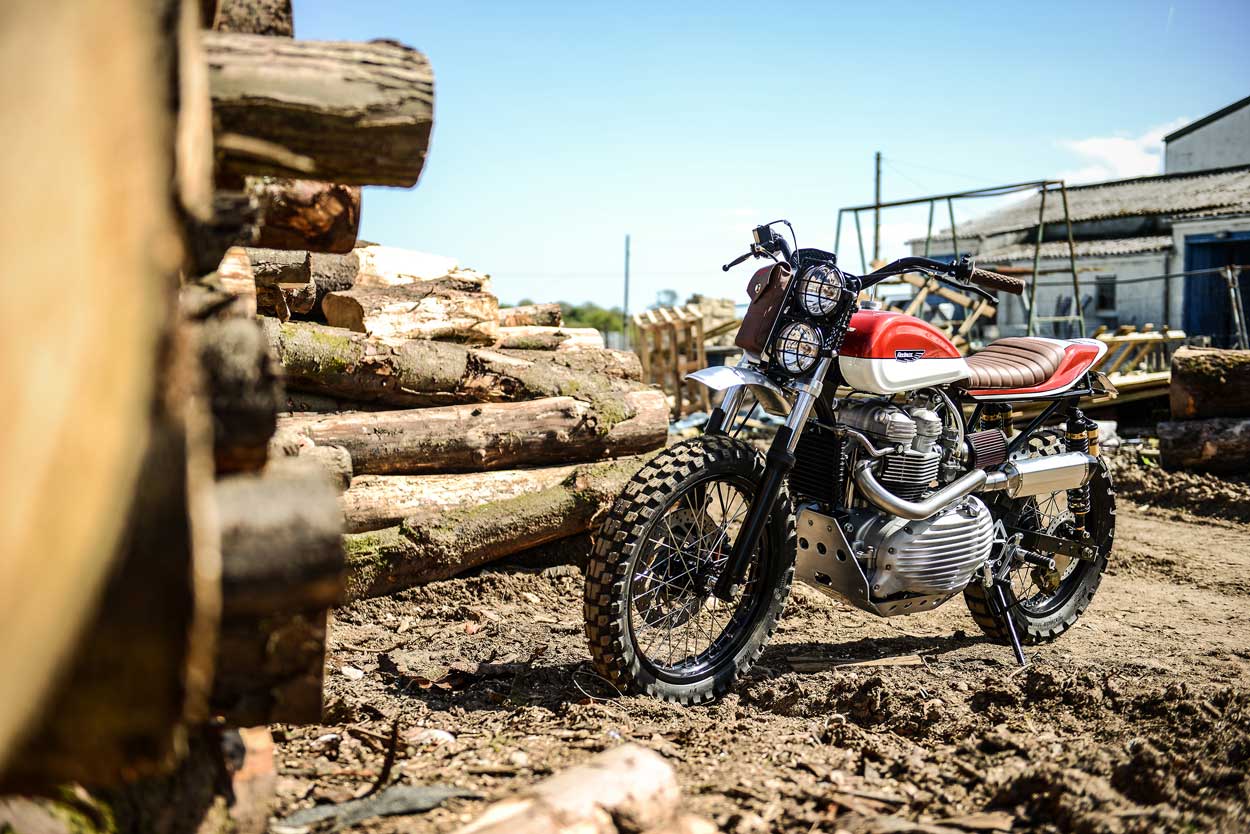 An 865cc Twin Cylinder engine from a 2006 carb model Triumph Bonneville was sourced as the power plant, and along with the stock oil cooling system was fitted to a newly black powder-coated Redmax frame. At the front of which now sits billet aluminium yokes from Fastec Engineering, that Steve designed to fit the Yamaha YZF-R6 forks that now grace the front of a Triumph. While at the back are a set of RFY shocks Steve sourced from eBay 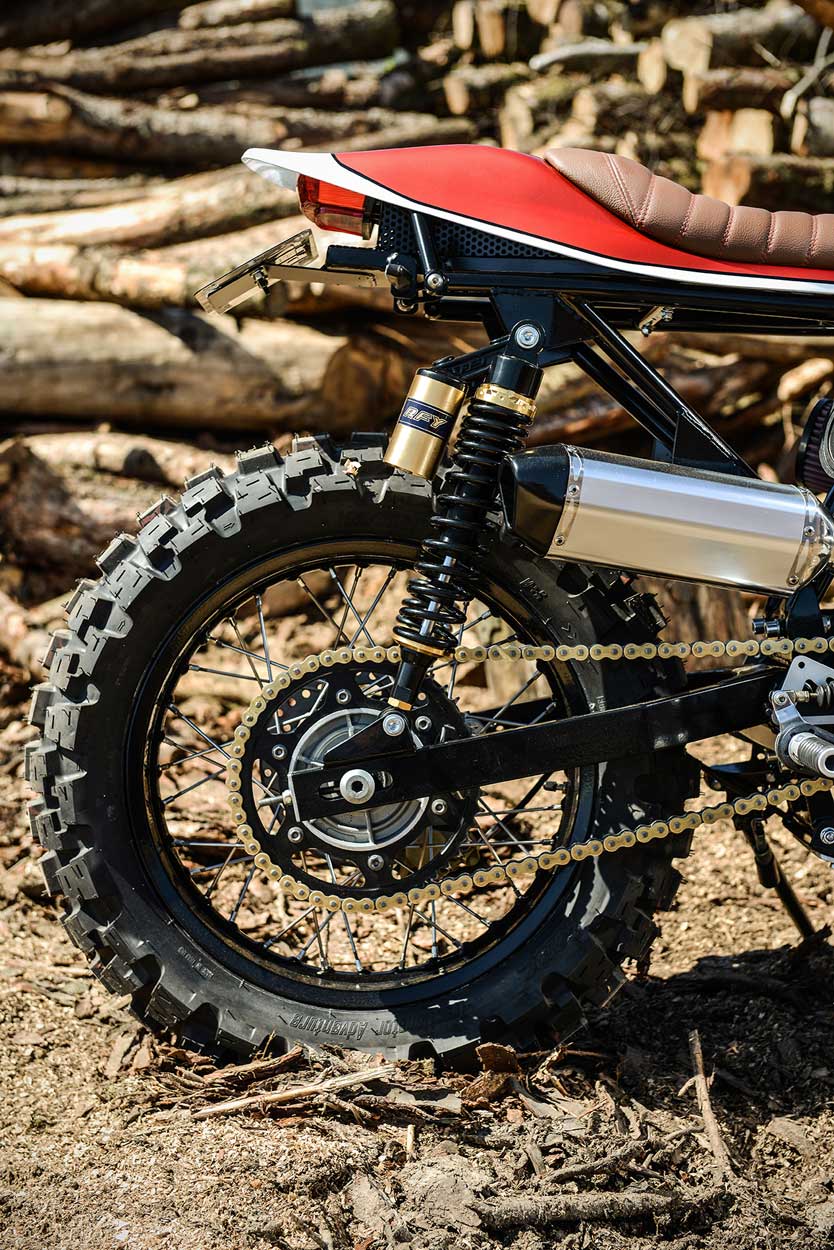 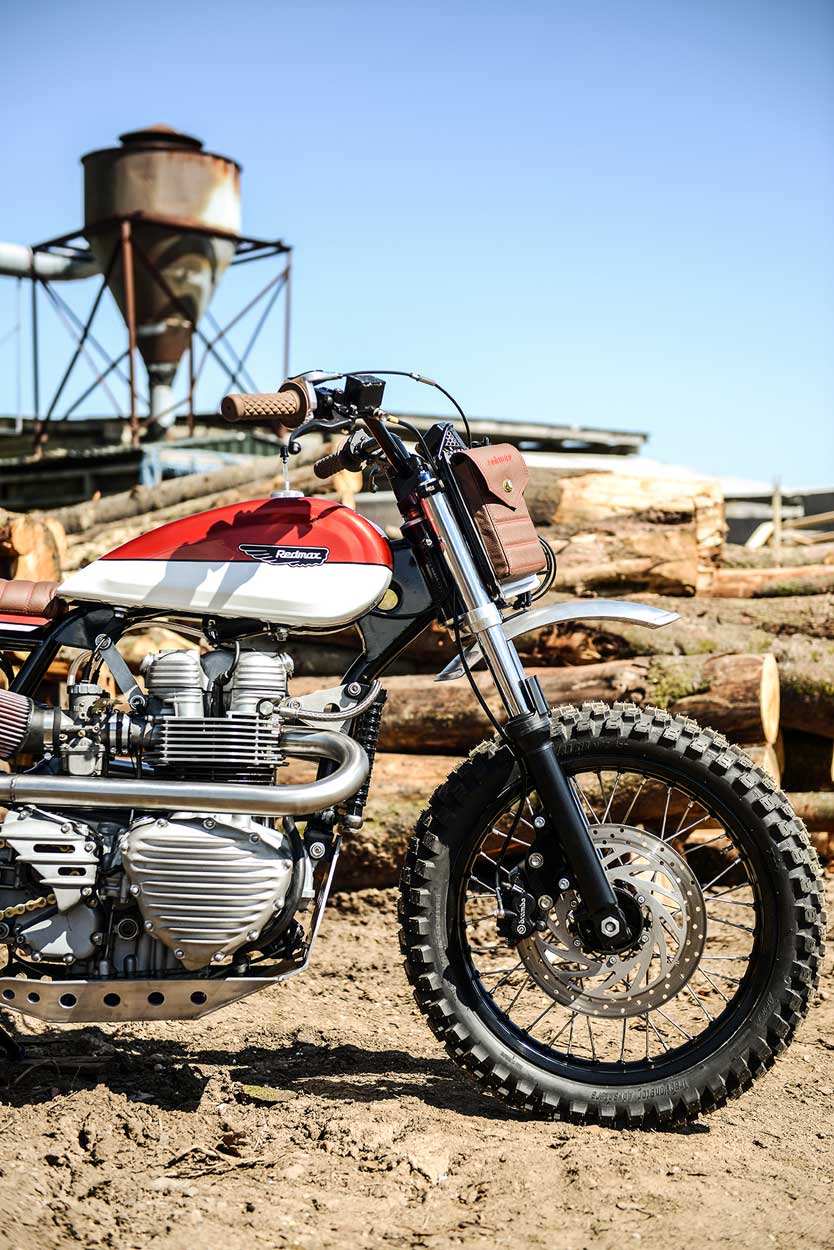 Getting the Knobbler rolling are a set of new alloy wheels from Colyton in Devon based specialist Dave Massam. The rims were powder coated black, laced to a set of Pegasso hubs using stainless Steele spokes, and wrapped in Motoz Tractionator Adventure tires. Which Steve advises us are rated to 120mph and are the first set in the UK. I’m sure they won’t be the last! 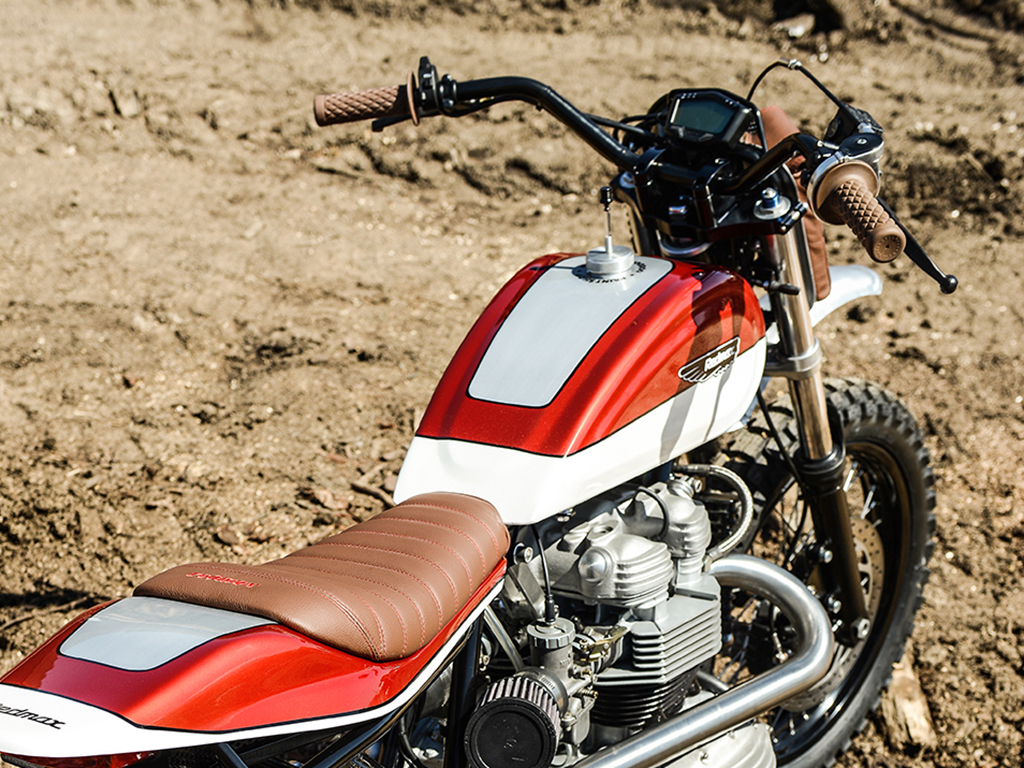 With Steve not having a donor Triumph to cannibalise he chose instead to fit Pegasso discs and calipers from a Ducati Monster, now fed by a new set of HEL hoses. That lead us up to the black Redmax flat-track bars now sporting a QA MX throttle, black dogleg levers, and Motogadget switches. that Steve tells us work well with the modern Koso digital dash. Keeping all the wiring simple is Motogadgets clever m.unit and an RFID unit allowing this Triumph to be keyless. 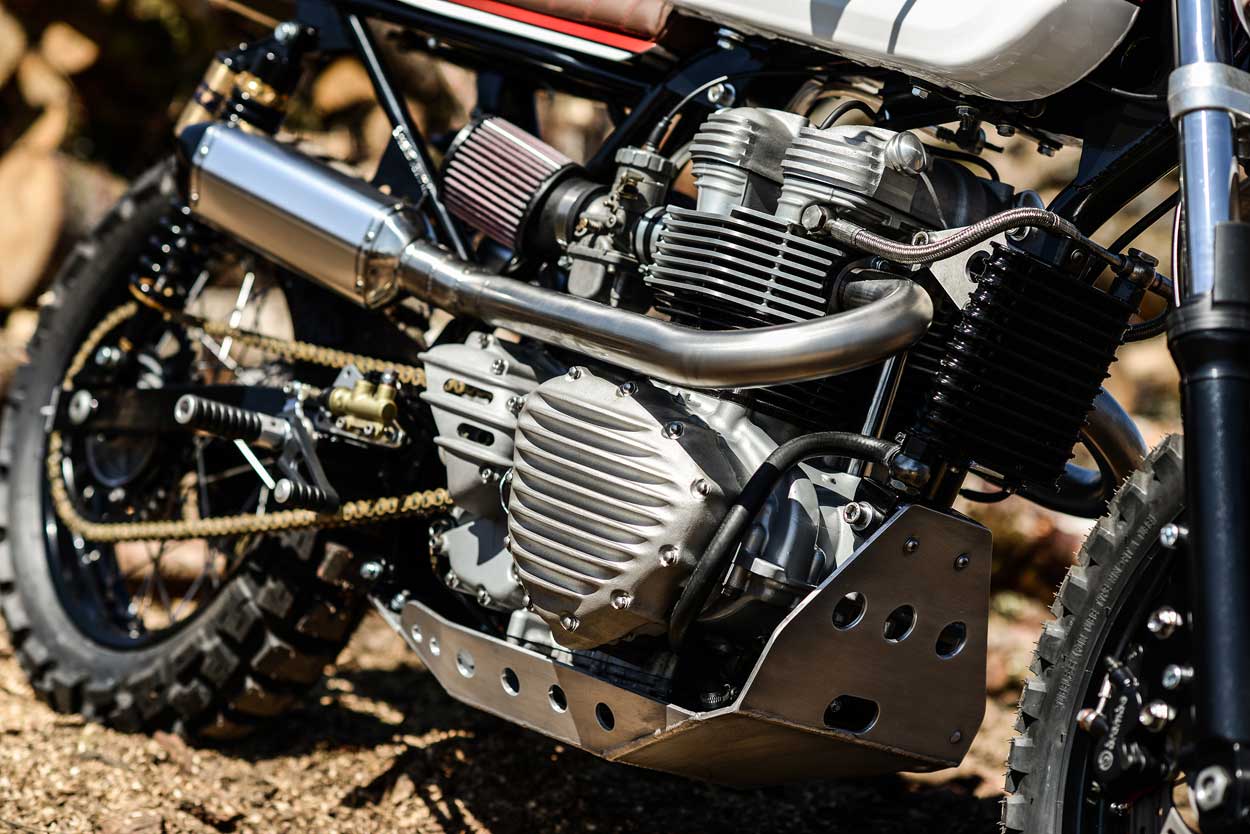 The 865cc air-cooled Triumph Twin engine, now protected by a ‘great big alloy bash plate’ hasn’t missed out on the upgrades. Being fitted with Speed Merchant’s/Esteves Motorcycle Designs Primary, Stator and Valve covers. Which are paired with a Motone sprocket cover, blasted to match the raw finish. With the breathing being improved with the fitting of a custom high exhausts system and 38mm Mikunis – operated by a fast action throttle. 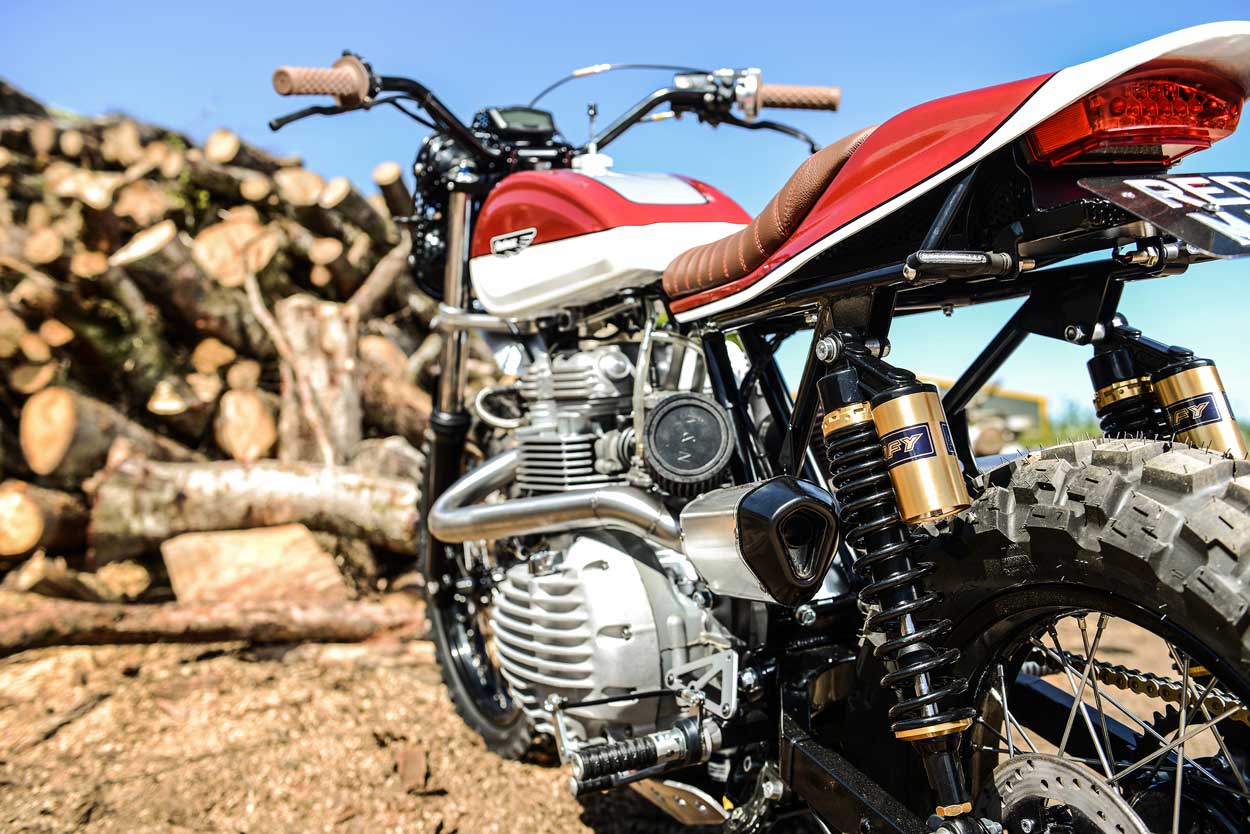 The Tank on the Knobbler is one of Steve’s 2.75 gallon XR Tier Drop tanks, which along with the Redmax Astro seat, , and does a grand job of hiding the electrics and a lithium-ion battery, were painted in subtle Ferrari metallic red, chosen by Andy, over a pearl white chosen by Steve, and painted by Lee Cockeram at Southampton based Roosters Voodoo paint shop. 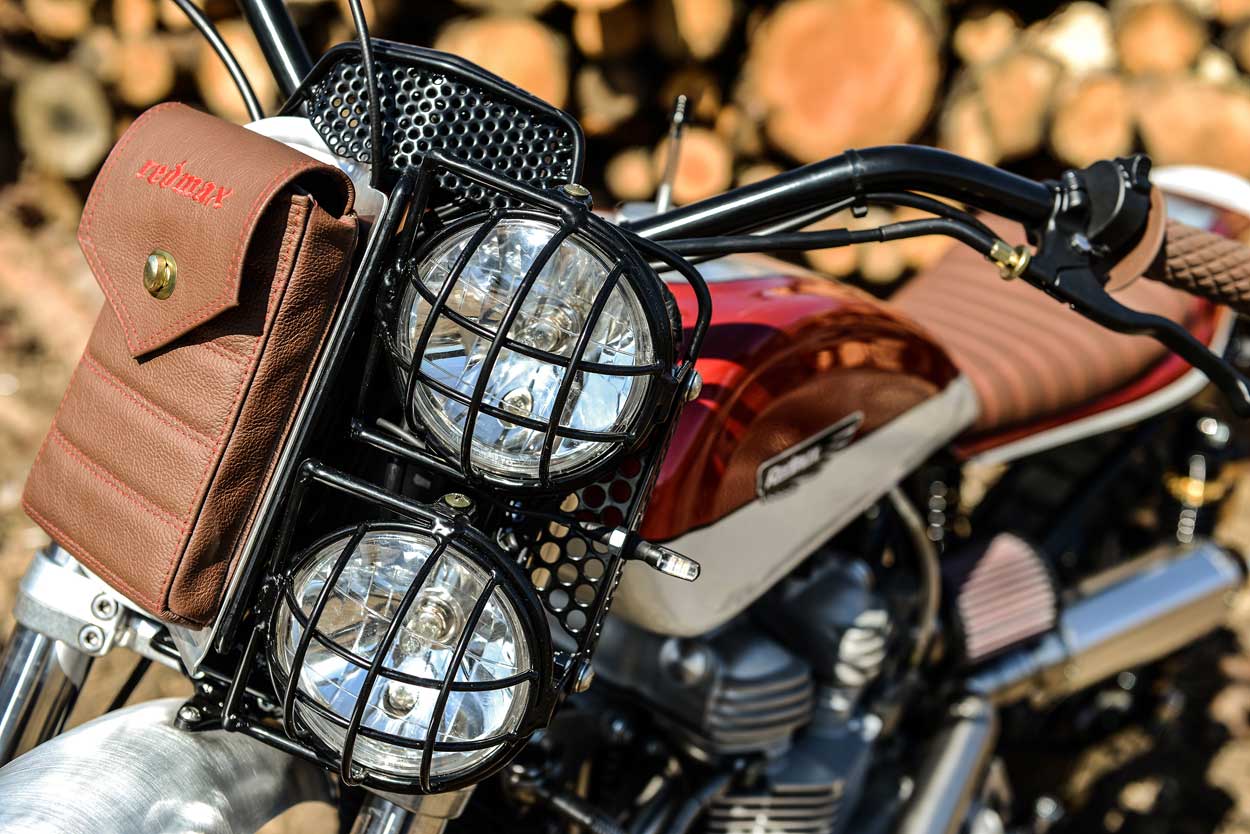 To make this Tracker come Scrambler the practical everyday ride Andy wanted, Steve fitted a Dual halogen Baja headlamp and the biggest digital rear light he could fit under that Redmax Astro seat, along with a set of high-intensity indicators front and back. A cool feature at the front is the number board hidden under a handy leather tool bag, made by Steves fabricator Glenn, who also made the leather seat pad that features the Redmax logo, and matches the colour of the Biltwell Grips a treat! 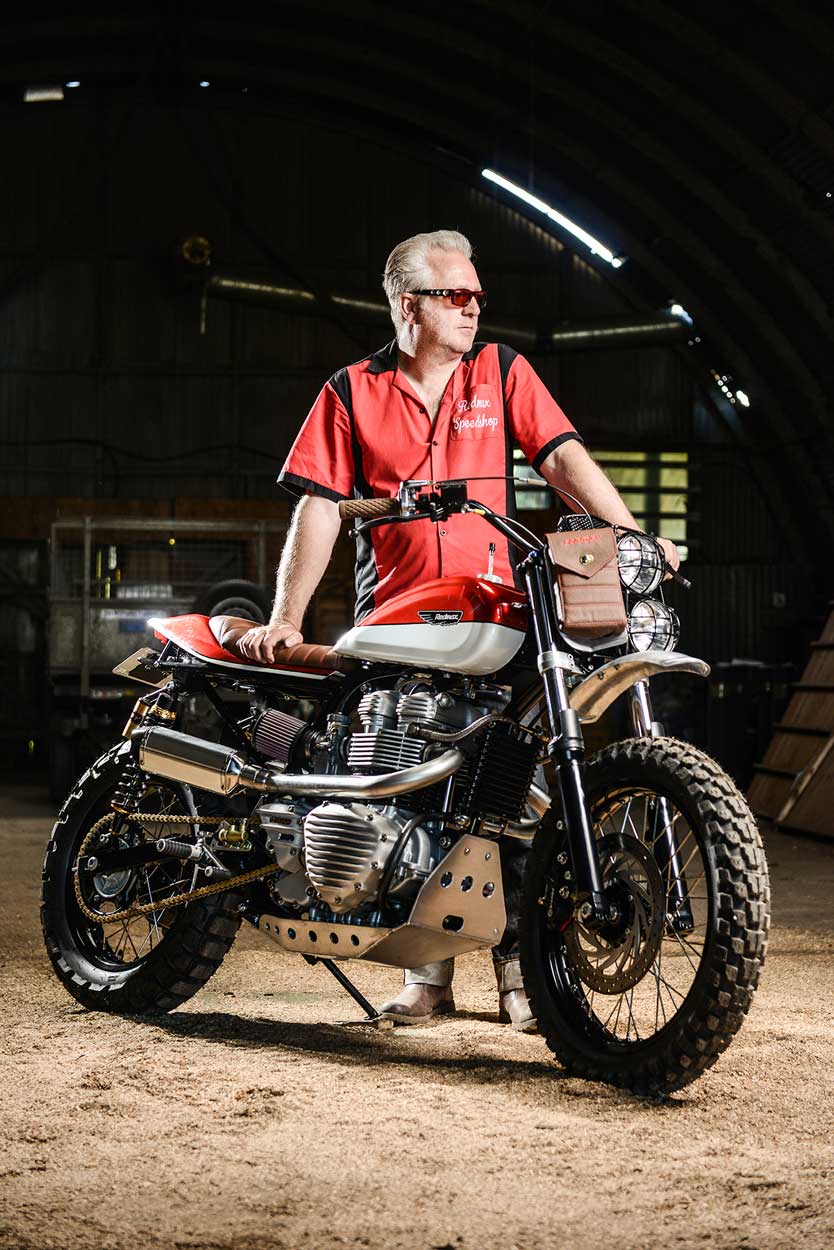 The Frame
Though this may not be the first, or even second Tracker frame built to host a Hinckley Twin engine. These awards go to Bill Gately of Bonneville Performance with their mono-shock frame, used in AMA Flat-track in the US by Triumph US, and Richard Pollock of Mule Motorcycles, who in conjunction with Streetmaster produce a retro-inspired twin-shock frame. 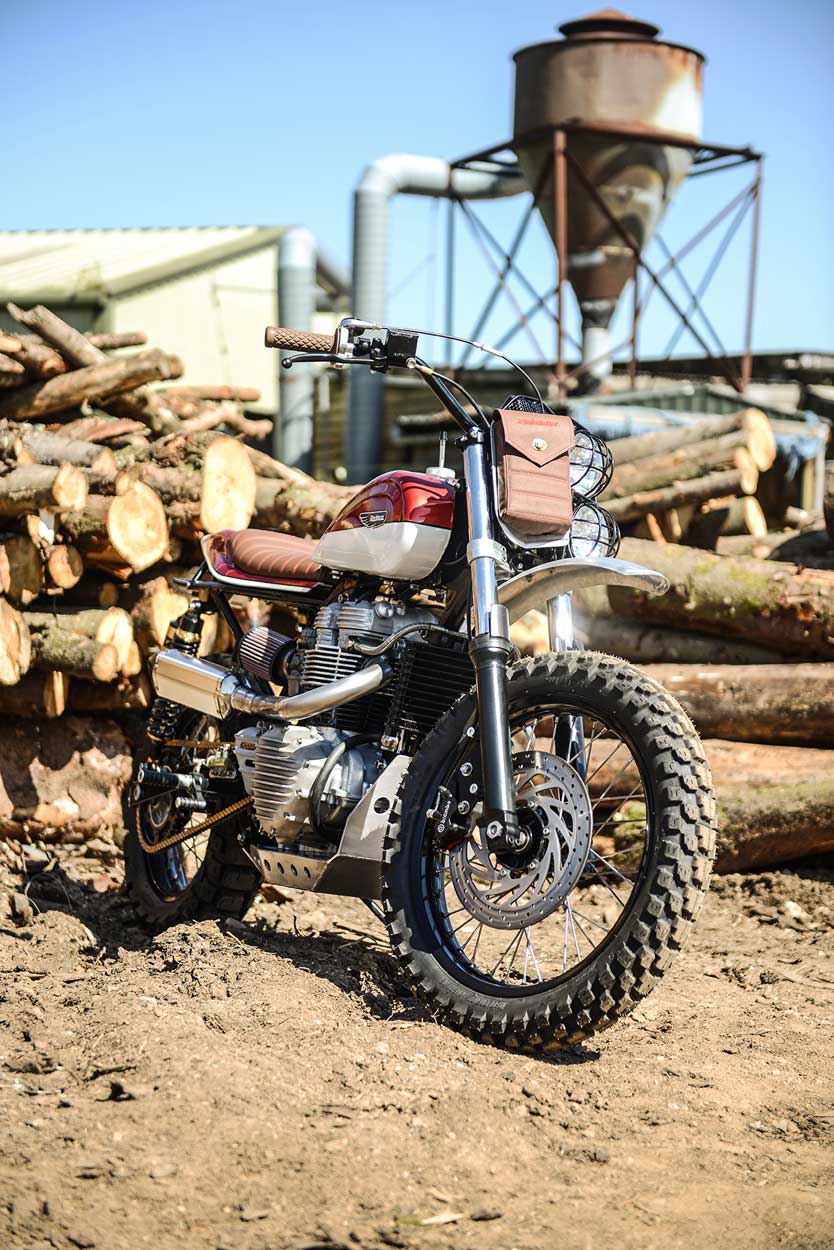 Beating Triumph UK, this I believe is the first Triumph Tracker frame built for the Hinckley Twin Engine to be made here in the UK. This is good news for those looking for a Tracker frame, or a lighter Scrambler frame, especially when you look at the prices of the American products which cost from $2,800 to nearly $4,000 – and then add 20% VAT and the cost of postage to the UK… Ouch! 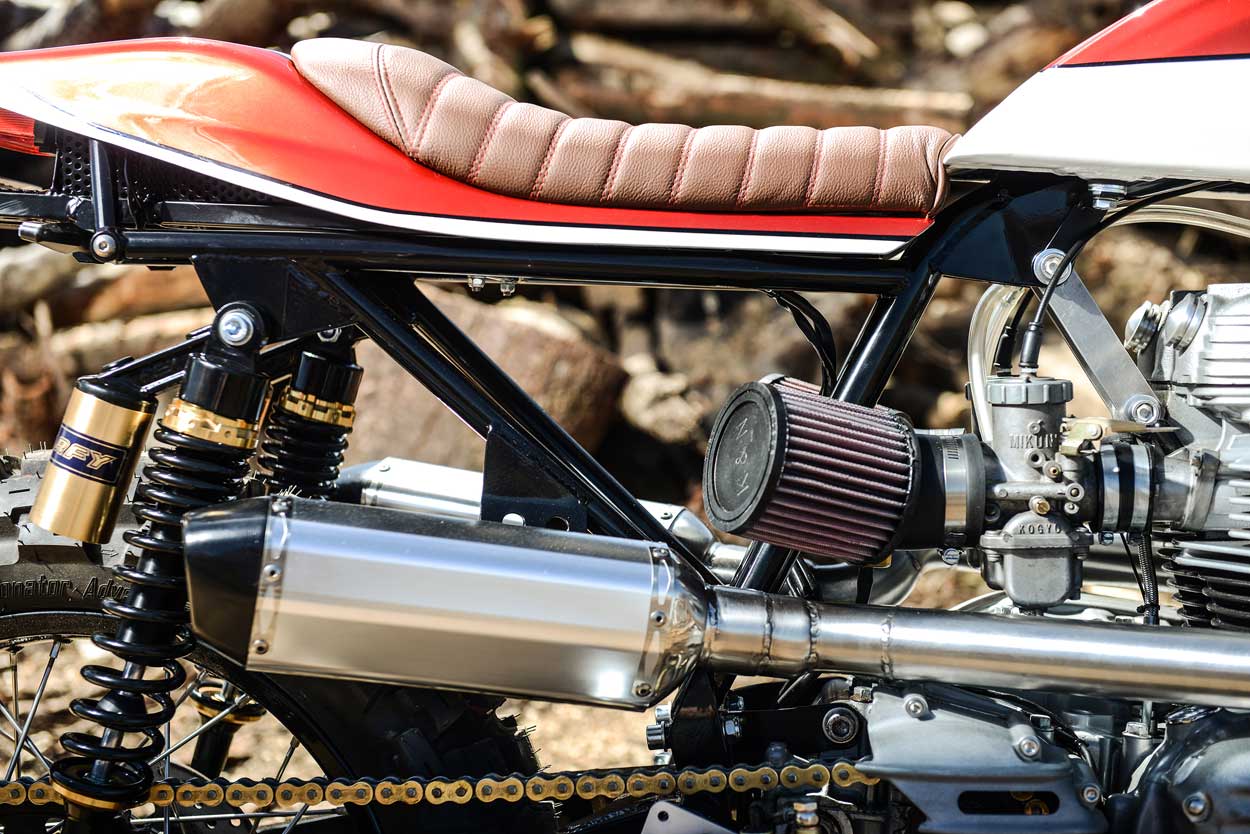 Costing approximately £2,000 and weighing in at 16kg including the swing-arm, the Redmax frame could represent the ultimate weight saving modification for your air-cooled Hinckley Triumph Twin will ever see. Other than taking out the engine and turning it into a push bike. And let us face it, it would look really shit hot too! 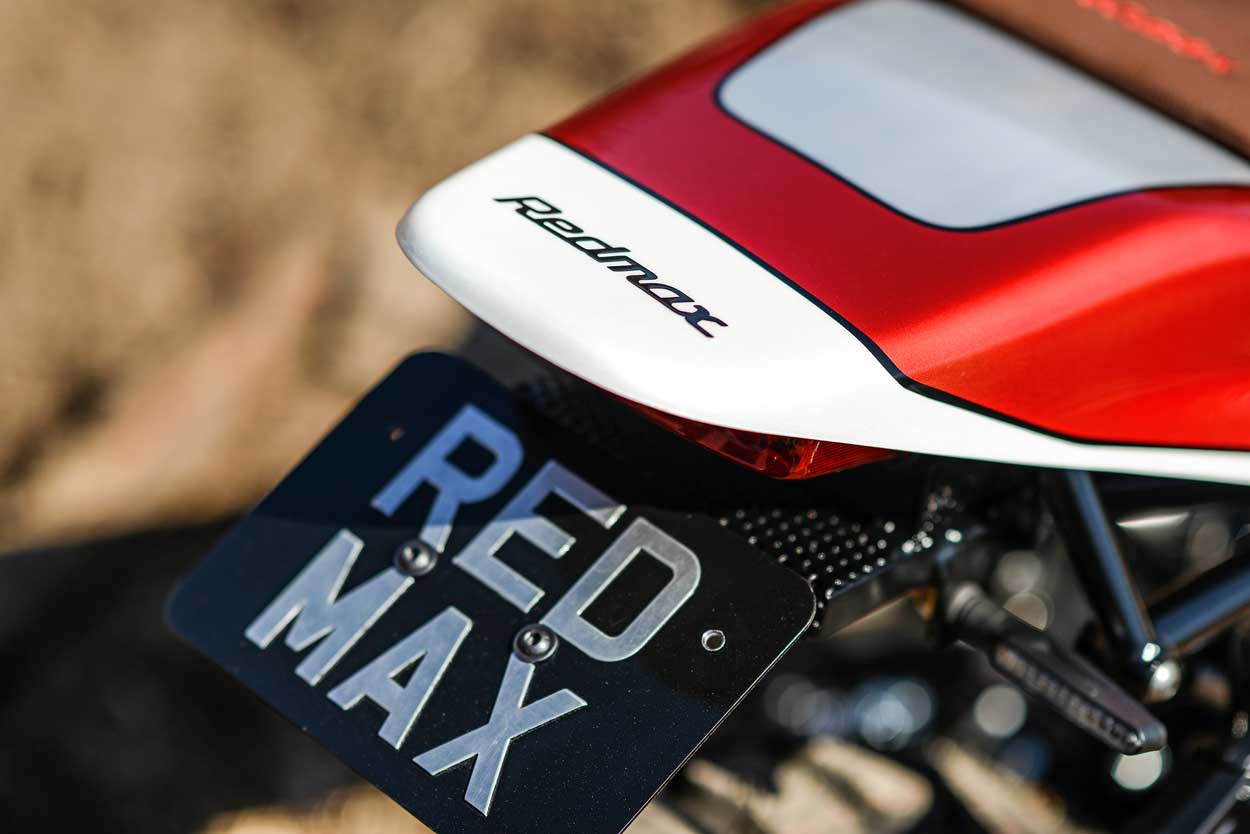 If you are seriously considering buying the Redmax frame (I am) or any of the others and swopping all your parts over, you might want to think again. It would be a better idea to sell that stocker, and go find either a crashed damaged machine and give it a new lease of life. Or better follow suit and just buy a 790 or 865cc engine – you’re really not going to use a whole lot of that donor Triumph Twin.