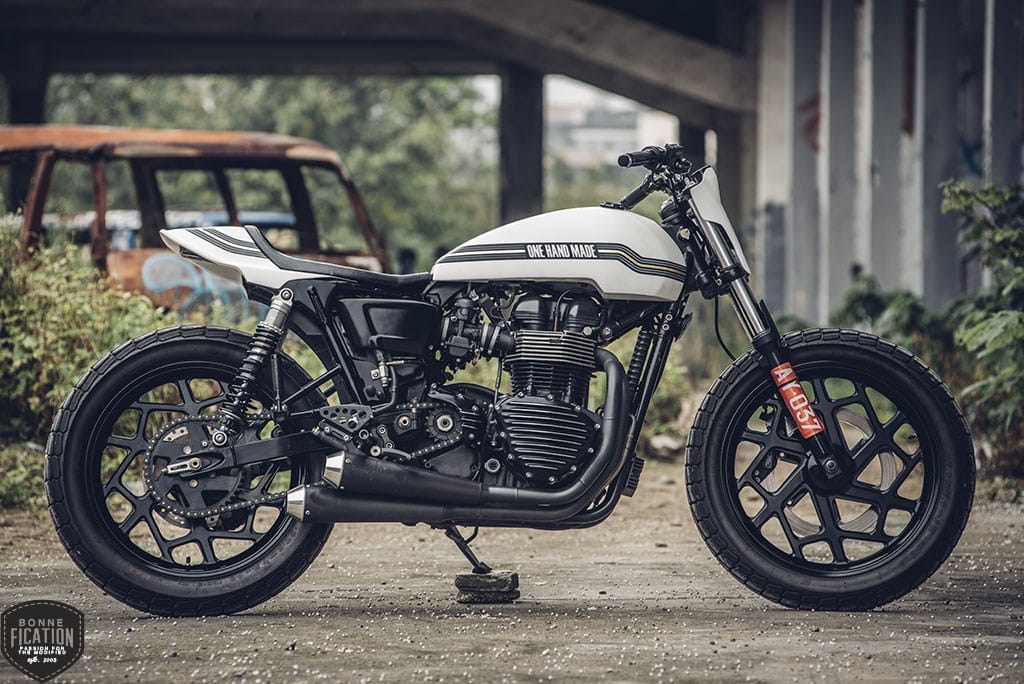 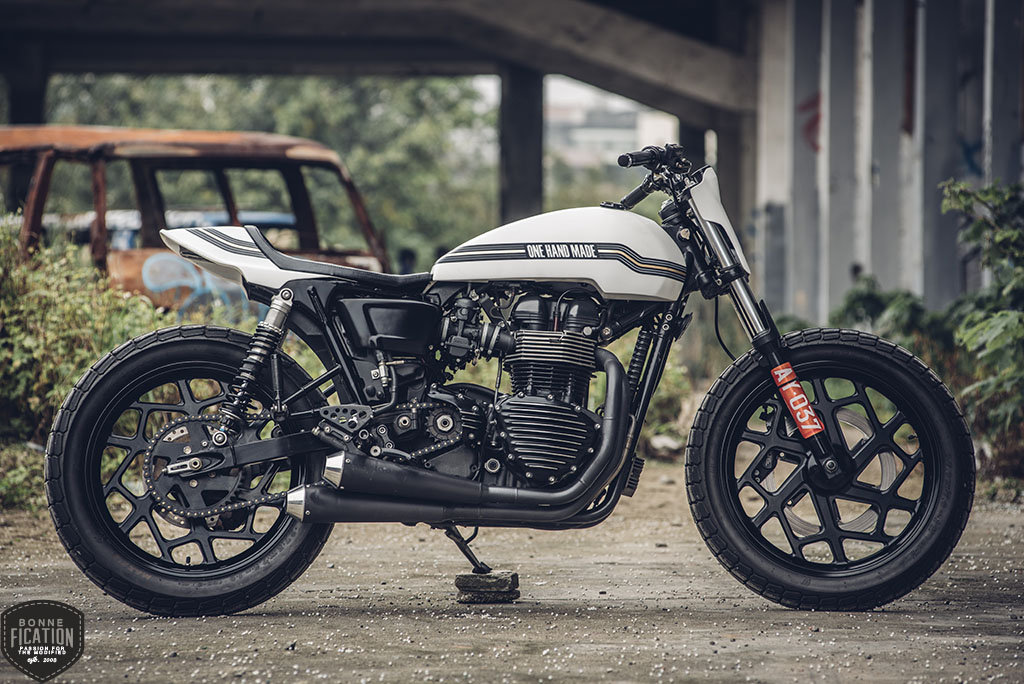 It’s clear that within the new wave custom scene, the Triumph ‘Tracker’s’ as a style of motorcycle is not as popular as it once was – overshadowed by the Scrambler, a style, which since Hammarhead Ind. built their Jack Pine some six years ago, has grown to dominate the custom Triumph scene. 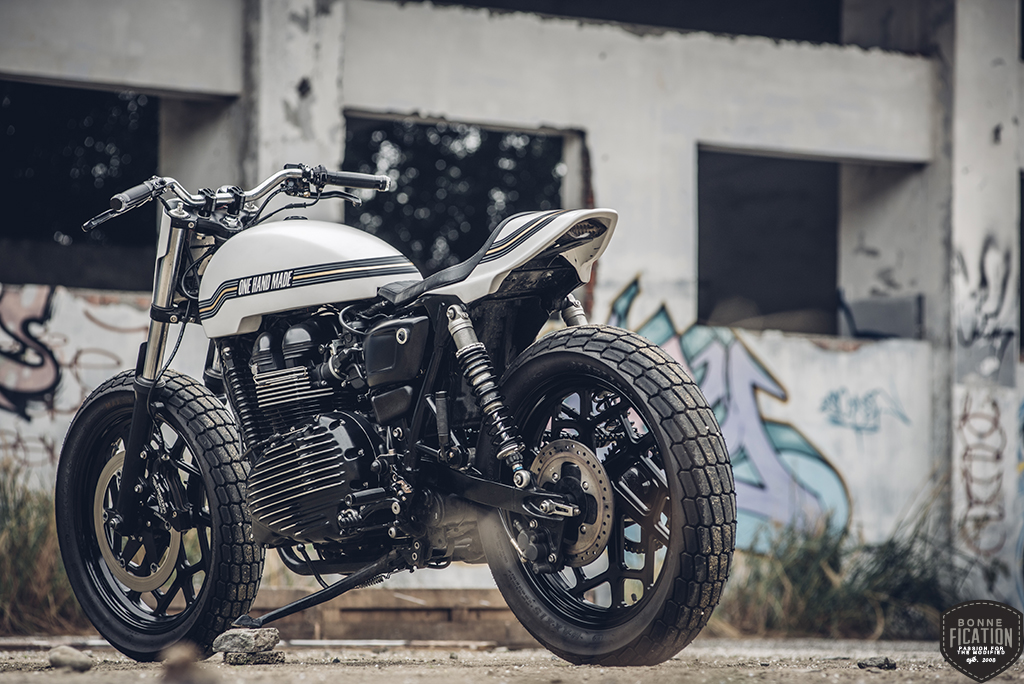 Unlike the more popular styles which really just needs a set of TK80’s or Vintage Firestones, there many more ways of getting a Flat Track build wrong, which might explain their undeserved lack in popularity. 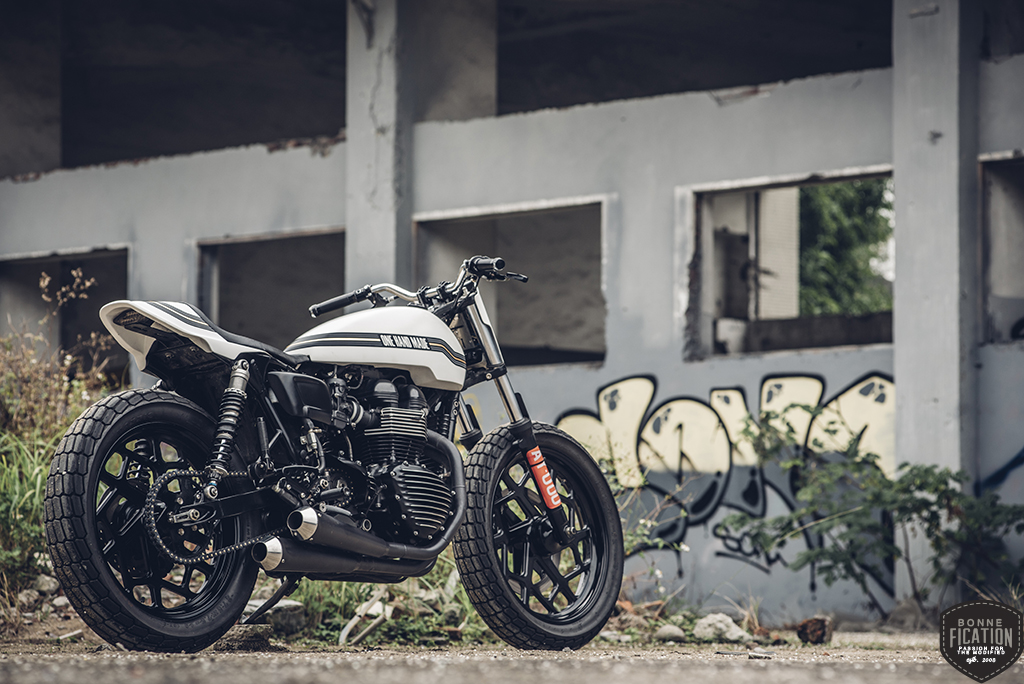 Much like any popular style, a good Tracker needs to follow a blueprint, it should preferably sit on a set of 19″ wheels, shod with Maxxis tires and sport a XR750 or similar seat cowl – the tank should be thin and sleek,  allowing the rider to hug the bike as closely as possible and finally the handlebars should be the classic backswept Tracker bars. 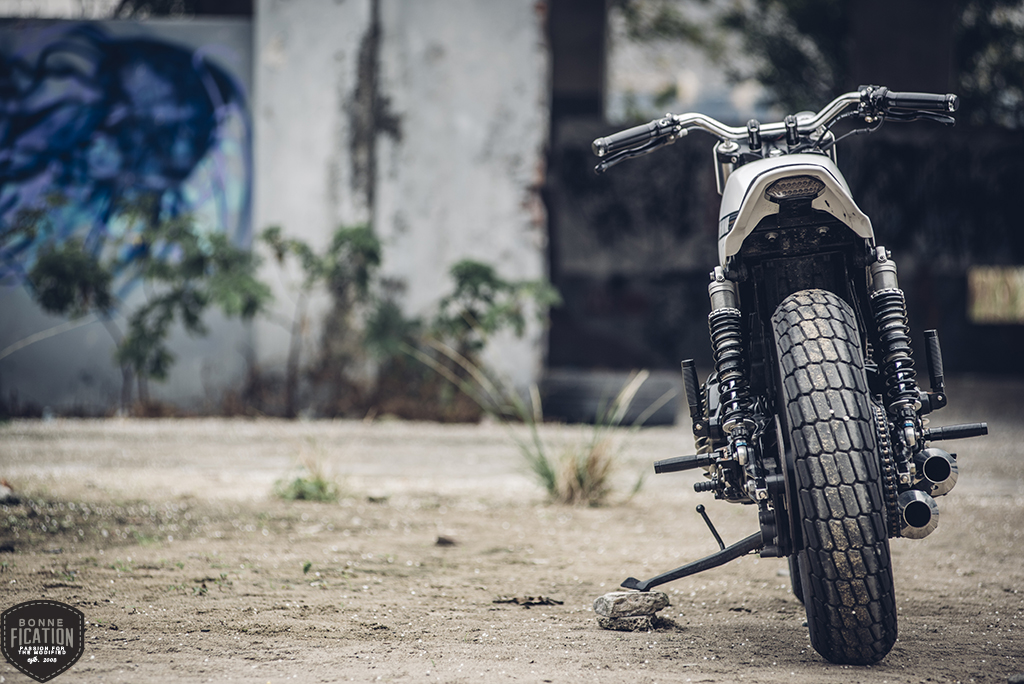 You could perhaps skip one or two of the above items, but when you bring them all together in one place you get something truly worth writing about, something such as the Super Ten, a Triumph Tracker by Taiwan based Onehandmade 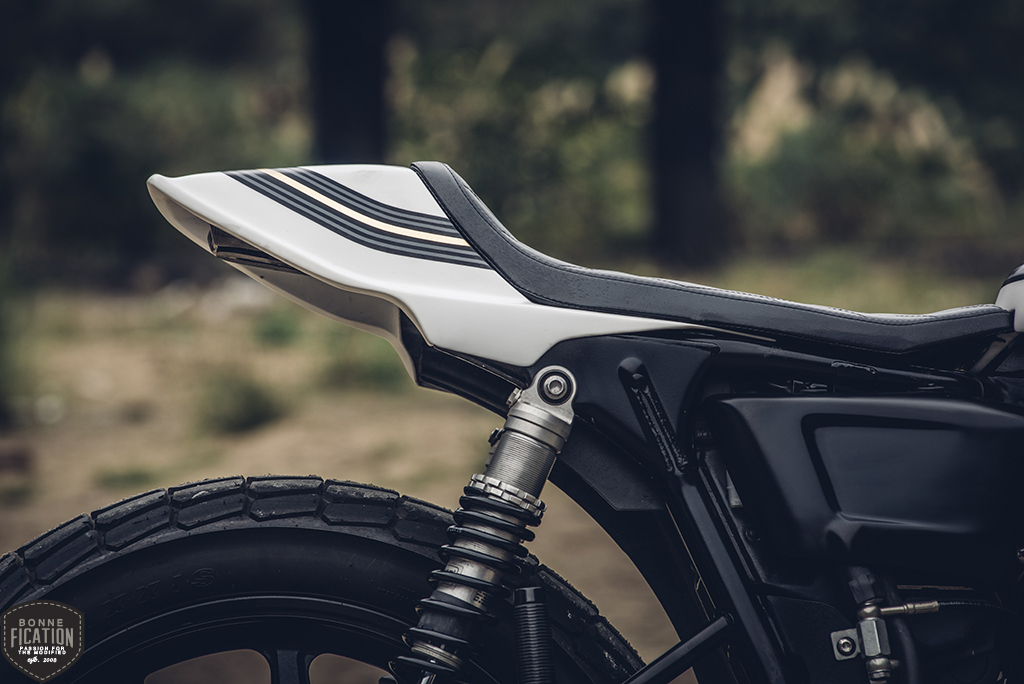 The Super Ten is based on a 2014 Triumph Thruxton and like many custom Triumphs before it has been shortened, losing over 5” off the back – once cut, Chun hand crafted a new seat from sheet aluminum, which is impressive when you consider that Onehandmade is named so, not because Chun is its only employee, but because he lost his right hand years before in a motorcycle accident.

“but that can’t stop me custom bike~I am glad I’m alive!!” 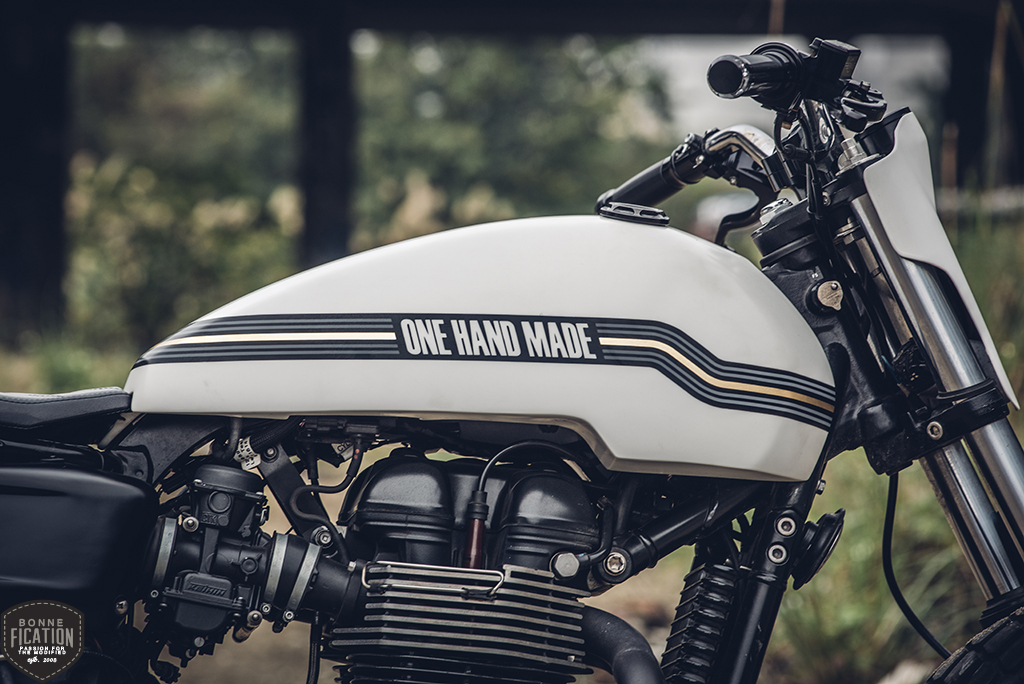 The Tracker style tank with integrated fuel pump is again hand crafted in alloy and mirrors the sculpting of the seat cowl. Chun took his time crafting the tank as he “didn’t want it to be a ‘normal’ flat tracker” – the one fitted is the third incarnation and demonstrates Chun’s quest for perfection.

At the front of the Super Ten is a very nice alloy headlight/number-board, which too has been handcrafted, in house and again mirrors the shape of both seat and tank. The number board has also been shaped to allow room for a Motogadget Tiny Speedo and fitted with the gauges function button. 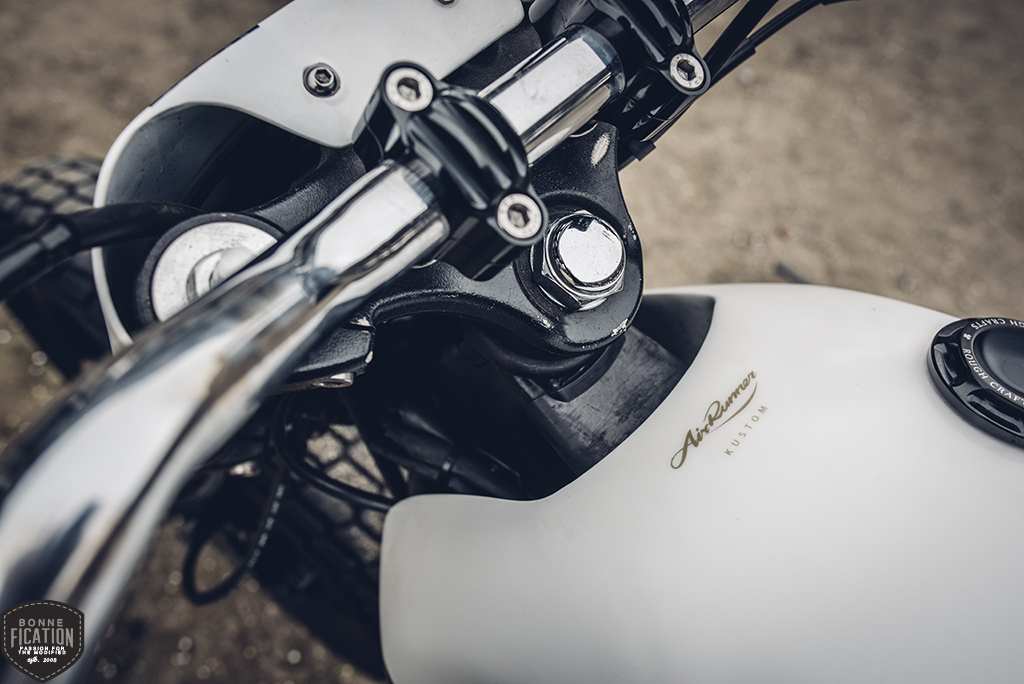 To complement Chun’s excellent fabricating skills all three items were put into the care of Air Runner Kustom who painted and finished them in retro Martini style graphic… it’s the bright one, it the right one…. (Google Martini commercials 70’s right now!) 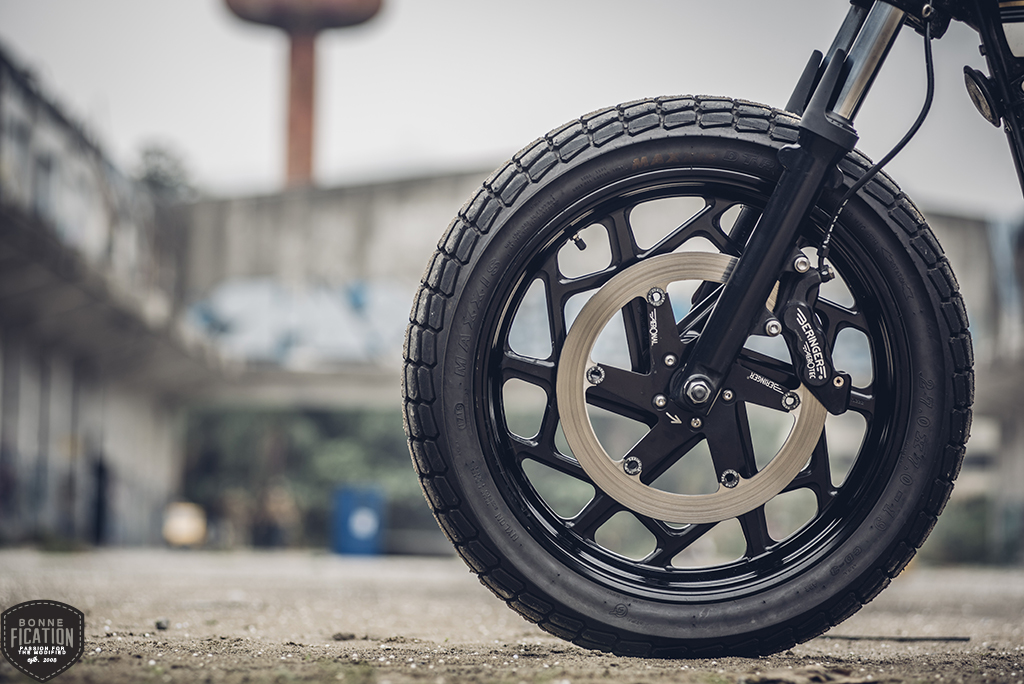 Finishing the Tracker look off a treat, though an expensive one, are a set of forged billet aluminum, black anodized, 19” Flurry wheels from Arlan Ness, fitted to the bike using a set of one-off Triumph hub. The wheels were then fitted with Maxxis DTR dirt track tires (27×7.0-19 front / 27.5×7.5-19 rear. 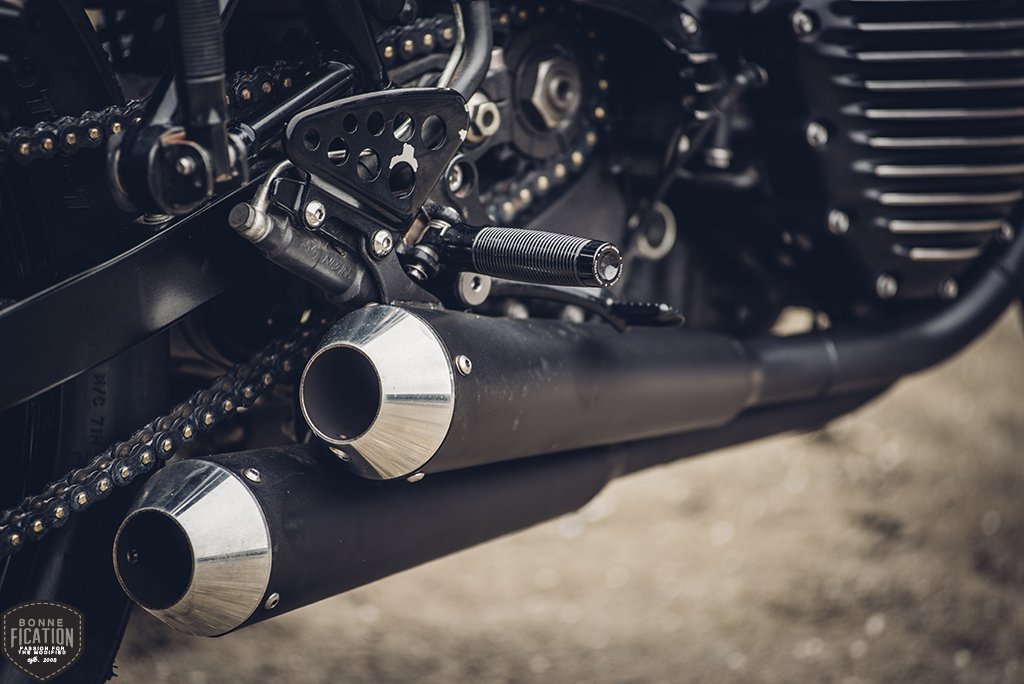 Like all good craftsmen, Chun’s fabrication skill didn’t stop at crafting the tank, seat and number board, but also include the super cool, black 2>2 Tracker exhausts system, which look fantastic when paired with a set Speed Merchant ribbed engine covers. As you would expect the braking was inproved with the addition of a  full Beringer system and levers with integrated micro switches. 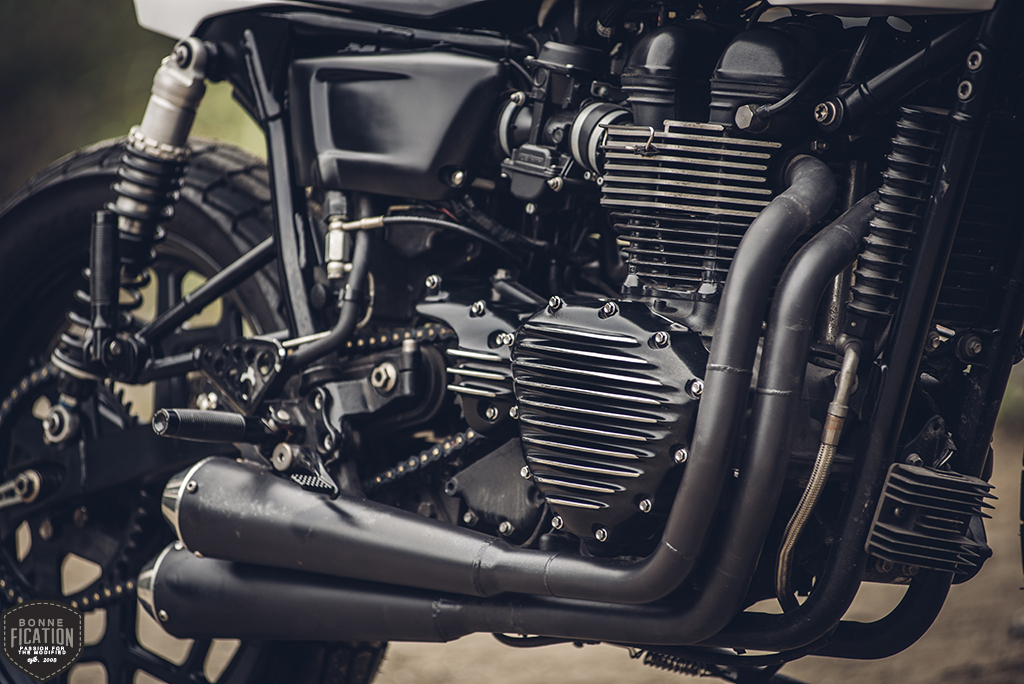 Mentionable, unmentionable on the Super Ten Tracker include; horn and rectifier relocation, Motogadget bar-end turn-signal and Motogadget the m-TRI adapter for the speedo, Rough Crafts  handlebar risers, bar and grips. The chain is the RK525 gxw xw-ring black scale and the rear shock are the Ohlins-TR538Y. 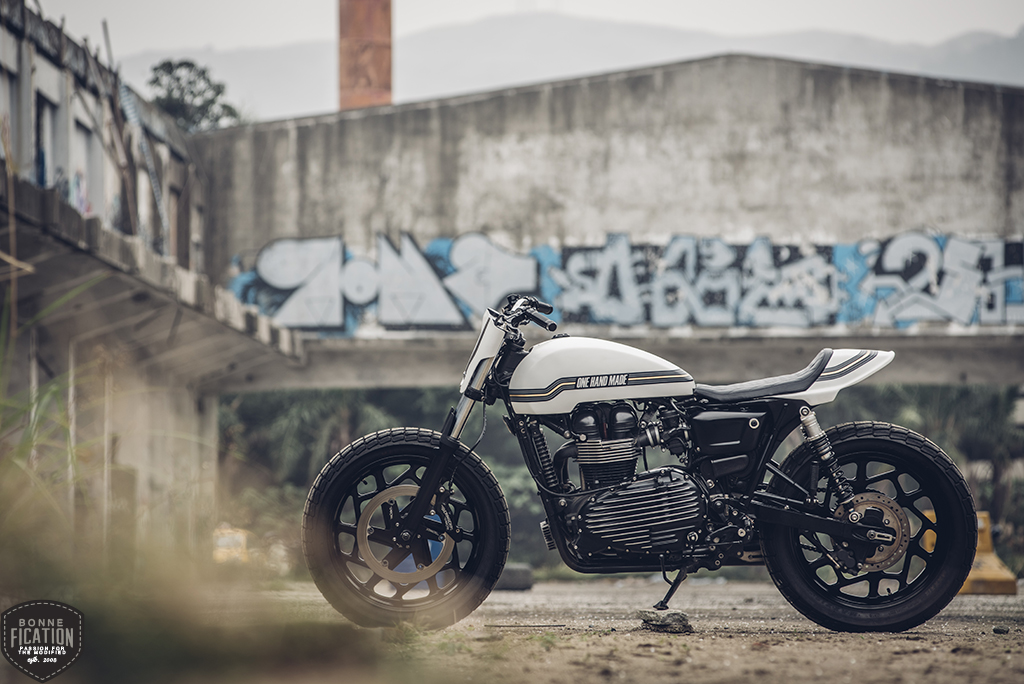 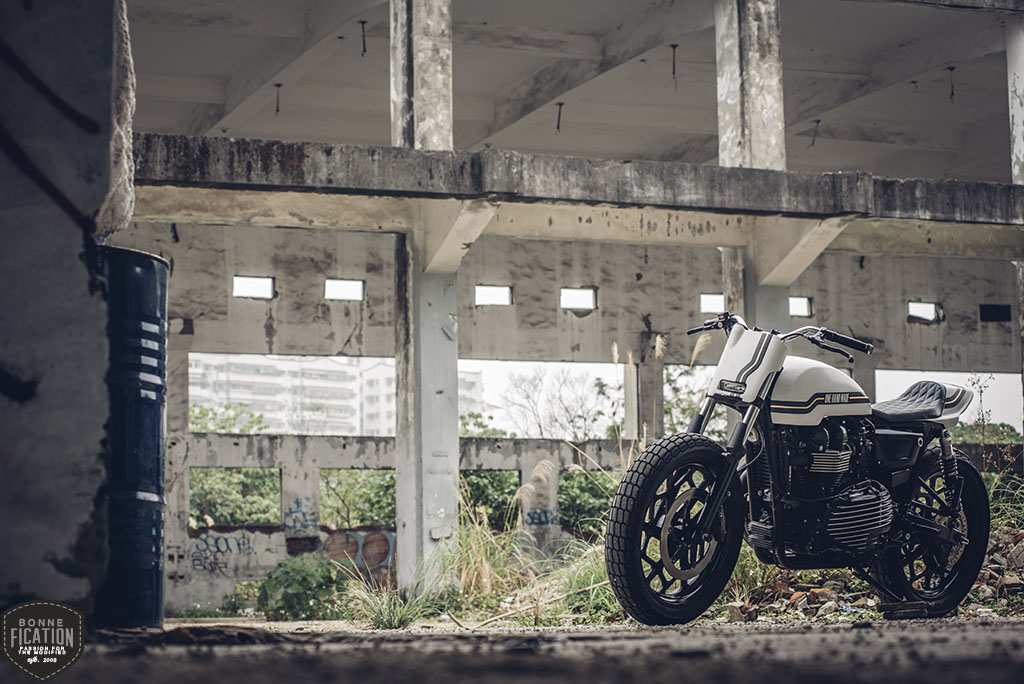 Next
Macco Motors – The Dapper Vagabond