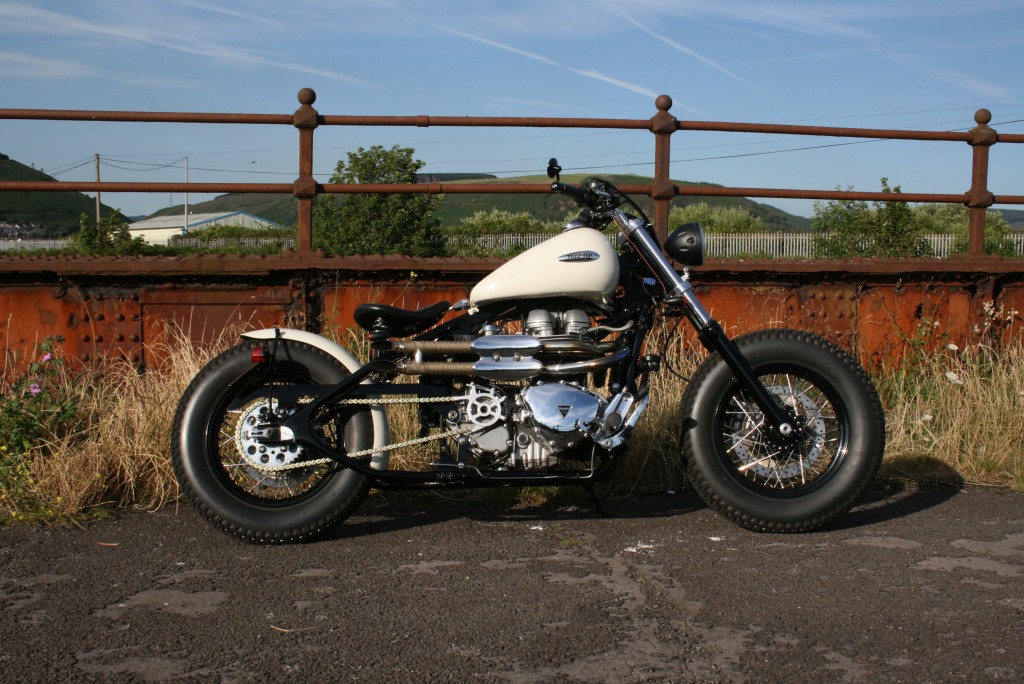 We don’t see enough chopper here on Bonnefication, perhaps they are out of trend in a world of Street Scrambler, Trackers and of course Cafe Racers. But saying that they are about, just take a look at the builds by Jack Lilley, Gilsons and East London Chop Shop and now the British based the father and son team of Lyndon Poultney “cocknose” and Stacey Poultney “stasss of Cocknose Choppers, who have tured their gaze to a 2005 Triumph America, a version of the Triumph Twin we too don’t see enough off. I recently contacted the guys at Cocknose Choppers and asked…‘so… whats it all about then…”  Lyndon Poultney continues…

“I worked for a number of years as a panel beater and sprayer and now I’m a factory worker, pressure and leak testing engines in Ford motor company. My son “stasss” works for the Architectural Glass Centre, Swansea Met, where he designs, makes, restores, and teaches stained glass.

We live in Port Talbot, South Wales and complete all our projects in our small garage and 10×8 shed. We are experienced builders but dream of building for a living!!! Our ethos is “Chop what we’ve got” and pride ourselves on being perfectionists. We are not into trailer queens but solid, safe rides. We are currently in the process of setting up a business name of Cocknose Choppers and a Facbebook page etc. We would love to expand our base to take on more work to offer everything from full custom builds made to order, to getting a bike ready for an MOT.

We bought the Triumph off a friend of who had bought it as a damaged repairable in 2005. We have known the bike for quite a while and always thought what an ugly slow bike it was! We have always said that if he wanted to sell it to let us know and when he was ready a deal was done. Although it was always serviced it was never really looked after in the cleaning etc so was looking a little tatty as they say! All the better for us as we bought the bike for a reasonable price!”

“We got the bike home and started to gather the bits for the build. We had planned a Harley springer front end and bought one off a good friend of but when we stripped the bike it turns out the Triumph frame has a huge headstock and without changing the frame it was never going to work. So we sort of lost interest in it for nearly 12 months as our ethos is you always chop what you’ve got! So it sat there for a while partly stripped. In the meantime we bought a 1970 TR6  Triumph did a shed full of work to it and used it for a bit then moved it on! But thats another story!! (I will chase that one up – Bonnefication)

Well the America was taking up space and I had some money off the TR6 so I dug it out and had another look. I am pretty lucky that i worked as a panel beater and sprayer for a number years so welding fabricating and spraying i always do myself. I have also bought a tig and on this bike it is all tig welded so i don’t have to grind out and blend all of the welds. On the America nearly all of it is ugly and heavy, even the yokes didn’t seem to match! I lowered the front by 2″ and during the mockup i raised the rear slightly so the bottom frame rails were parallel to the floor, i’m quite anal about that detail on all my bikes! They must sit right! Also i always want good ground clearance because anybody who rides a hardtail knows that they handle well and i want to ride without everything dragging on the floor! Wanted to keep the bike stock length as the America is a long bike anyway.”

“I stripped the wheels and sent them off to be powder coated gloss black and rebuilt with stainless spokes and 16×3 rims. Wanted the wheels built first so i knew it would all fit on the mock up. Just got to be real careful when working on the bike after. Once i had the wheels back i refitted them to the bike and i could then start cutting the frame up! Trouble with these Hinckley Triumph Twins is the rear half of the frames is a but of a weird set up! The swingarm pivot goes through the rear of the engine and the whole of the rear frame is then clamped off the ends of the swingarm pivot bolt. Once you remove this the whole rear end just floats about and because i was going to use the ends off the swingarm to this was quite a problem!

Because i have’nt got a frame jig i usually use the swingarm with extension plates with the new axle plates attached. Doing it this way the rear end stays inline but is very time consuming as you have to cut part of the original frame away bend up and tack in the new tubes. once the bottom rails were both in place i had Fenland choppers to make me a nice round section muddie to suit the avon speedmaster tyre. I refitted the rear wheel so i could fit the cross piece to mount the mudguard. I then weld the bottom rails in doing a bit either side allowing to cool to try and avoid it twisting. Rear wheel removed the spacer refitted i then did the same for the top rails. I had already cut the original swingarm 75% through near where the wheel spindle mounts. Once the top rails and cross piece were fitted and welded in i then finished cutting the swingarm and removed it.”

“It was now hardtailed but retaining most of the original frame and the removable side rails. Of course had to remake all of the rear engine mounts etc but the basic frame was done. All nice and straight and looked the nuts! I then mounted the Harley fatbobs and spent quite a number of hours hand fabricating the centre piece out of metal. I could the mount the leather seat using one of Fabricator Kevins seat brackets. not cheap but pure quality.

All stainless tig welded and the pivots are bushed. risers were harley, cut and polished,controls are all original America Items. Bike was then stripped down and all painted in two pack black, tins are base coat and lacquer in BMW pepper white. I then cut and ground up the bottom yoke to match the top one, fitted a taper roller bearing headstock kit. Has a Koso digi speedo fitted and the pickup is on the rear wheel to keep the front end clean and tidy.

The original speedo drive was gutted, put in the lathe and machined down and polished and looks much neater! The narrow drag bars made it very difficult to fit the brake pipe so i machined up some banjo’s out of brass and made a copper brake pipe down to a home made custom pipe splitter underneath the bottom yoke, looks super neat and works really well. Small billet alloy Oberon mirror on the bar end, again works surprisingly well.”

“Fitted small black bullet indicators on custom made mounts as this just makes it easier to live with!! Exhausts are of the Triumph scrambler but had to be really cut about, had some stainless downpipes kicking about which were cut up for the little turn outs. Made some small removable baffles to kill the noise a little. It really does sound awesome when giving it the berries though!

Has Procom aftermarket ecu and i have done away with the air bypass setup so now goes and sounds much better. All together i think it turned out to be a much better looking and riding bike than the ugly slow bike it left the factory as !!!!!

Since completing the Triumph it has been sold to fund our other projects.”