I have been asked on numerous occasion to write the Street Sled story, a bike which really started the Bonnefication, (or as it was called back in 2008 Motochimp) ball rolling. For some of you it may be a story you are familiar with, I going to do the story over the next couple of nights to reflect the different stages the bike went through.

Part One…. Purchase and First Mods

I purchased the 2005 (55 plate) Triumph Scrambler from Three Cross Motorcycles back in 2008, for just over £4k. A bike I’m told is the very bike you see in the Triumph Catalogue, and was one of several that were featured in the official press releases.

The Scrambler had covered a little over 5000 miles, and was in great condition considering it had two previous owners. The Scrambler also sported just about every Triumph accessory there was, most of which found new homes via eBay. This gave me a little spending money to make a few much wanted changes to the Scrambler.

The first of these modification was a very nice set of D&D slips on, which were paired with the NARK airbox eliminator from New Bonneville. I fitted the NARK and the Exhausts myself and rode the asthmatic sounding and performing Scrambler to the Triumph garage for the guys to tune. The return journey was a lot more fun and finally the Scrambler could breath, and my god did it sound good.

I continued the upgrades a few months later with the fitting of the Yamaha mini speedo upgrade, which had been featured on the TriumphRat forum. This is a really nice and easy to do mod, the wiring is easy to do thanks to the supplied and very helpful wiring diagram. This same diagram helped me wire in my Motogadget speedo years later.

The next upgrade was the replacement of the hideous rear light and indicators, what the hell were Triumph thinking with those. These were replaced by the Bates style rear light and billet alloy turn signals. Later I had a few issues with the indicators as they let in water, which needed draining after ever ride in the wet. Also the Bates style rear light doesn’t really fit all that well on the Hinckley Twin due to the difference in curvature of the mudguard.

Next for the skip were the stock Deathwing tyres, which were replaced by Metzeler Tourances. A far better tyre that also helped reduce a little of the vibration that becomes annoying and uncomfortable on long rides. I rode the Scrambler Like this for a while, come rain or shine, and was pretty happy with it overall, with the Scrambler getting plenty of admiring glances. 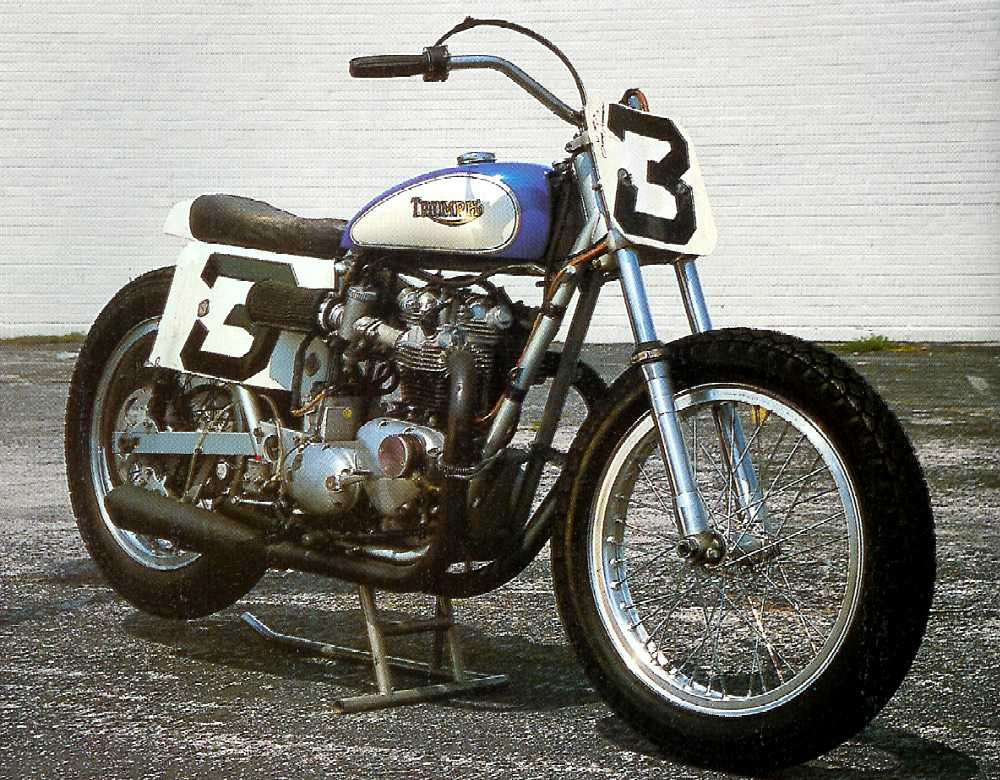 Im not really sure why I did what i did next, but one summer I was looking at the bike in the way I do, with an eye to modify, and I though the Scrambler needed a another change. I had been doing the Motochimp blog for a year or two now and and seen plenty of bikes that inspired me, and I knew just what style I wanted to go for…..Flattracker!… A style that was popular back then, but not as popular as it is now.

As the bike was my daily ride, I took a week off work and set about stripping the Scrambler on the drive, the bike came apart pretty easily and quickly, I remembered my days of restoring BMC Mini’s, and took plenty of detailed pics for the rebuild. I found that I only really needed a simply toolkit to do a strip down as I wasn’t touching the engine.

The frame and tank were sent off to be painted and a week later I collected  my newly painted parts and set about the rebuild. Which was also pretty easy, thanks to all those detailed photos. The only problem I had were with the plastic clips that hold the loom and wiring in place. These after a few years of British weather and become brittle and were prone to breaking. Taking the bike apart to this degree gave me a greater understanding of the Triumph Scrambler, which in turn has made any issues I have with modifying the Triumph Twin a lot less daunting.

The rebuild only took a couple of days, with most of the time spent cleaning parts before they went back on the bike. The overall finished effect was satisfactory, it was OK… Not really what I had imagined, it needed something else….. Oh dear!

I toyed with a few different trackers seats, but never really liked the results. It always came down to one thing… the Triumph Twin frame is just to long. At the time I was not prepared or did I have the knowledge to cut the bike to resemble the bike built by Deus Ex Machina, the first people to take a grinder to the Triumph frame. So again the bike when back to life as the daily computer for another year.

Part 2 – From Tracker to Sled!
In part 2 I will take the Scrambler from Silver to red to black and beyond… what a ride!