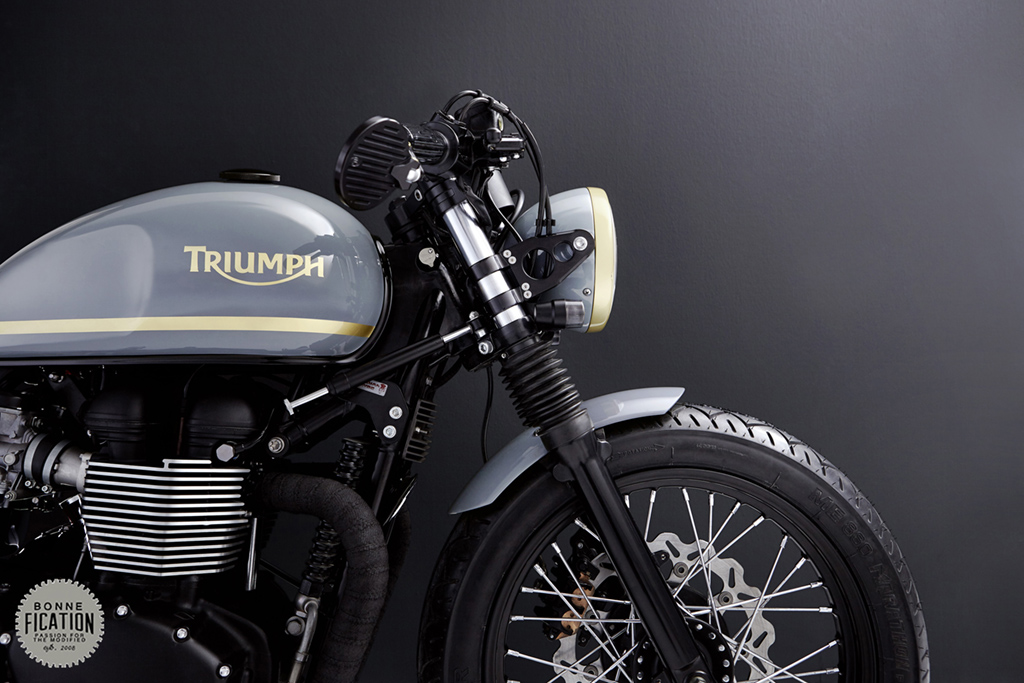 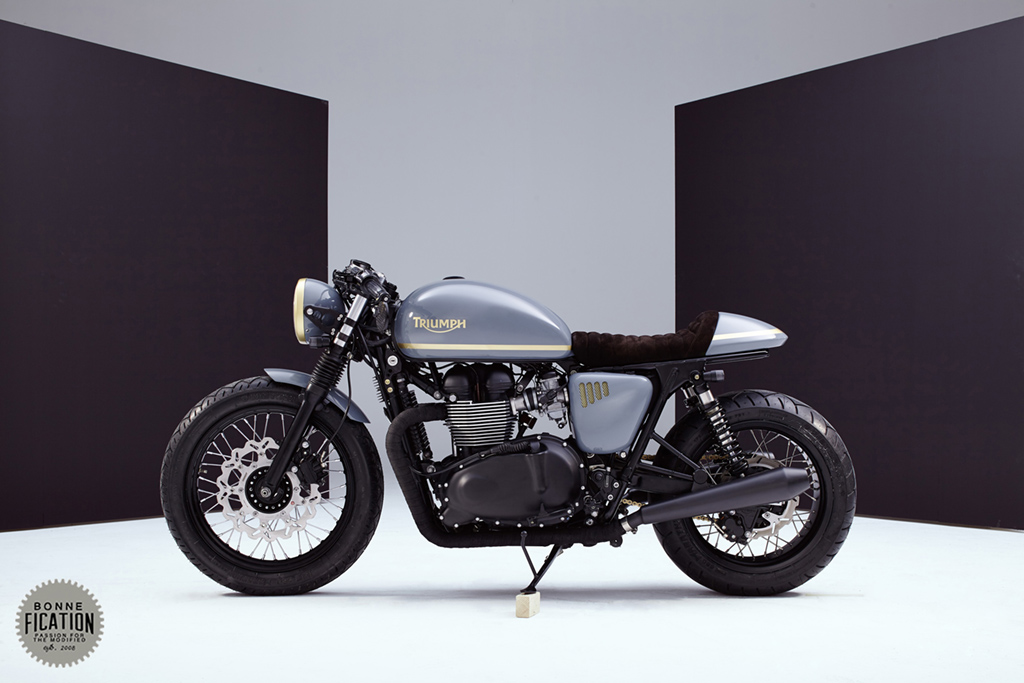 From the Turkish builder Bunker Customs comes this rather pretty 2014 Bonneville T100 Based Cafe Racer, but unlike some customs Triumph Twins this Twins beauty is not just skin deep. 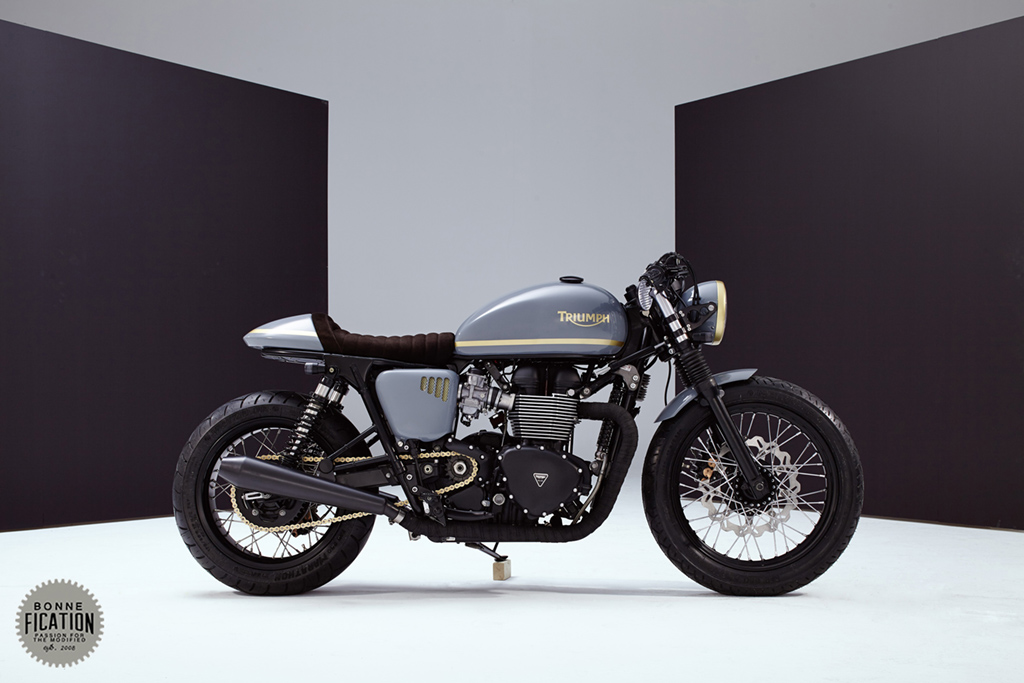 Under that blue and gold livery resides a 81bhp motor, up from the standard 68bhp. Some may feel boosting the humble Triumph Twins performance is perhaps akin to turbo charging a moped, with a ‘if you want performance buy a different bike‘ attitude. 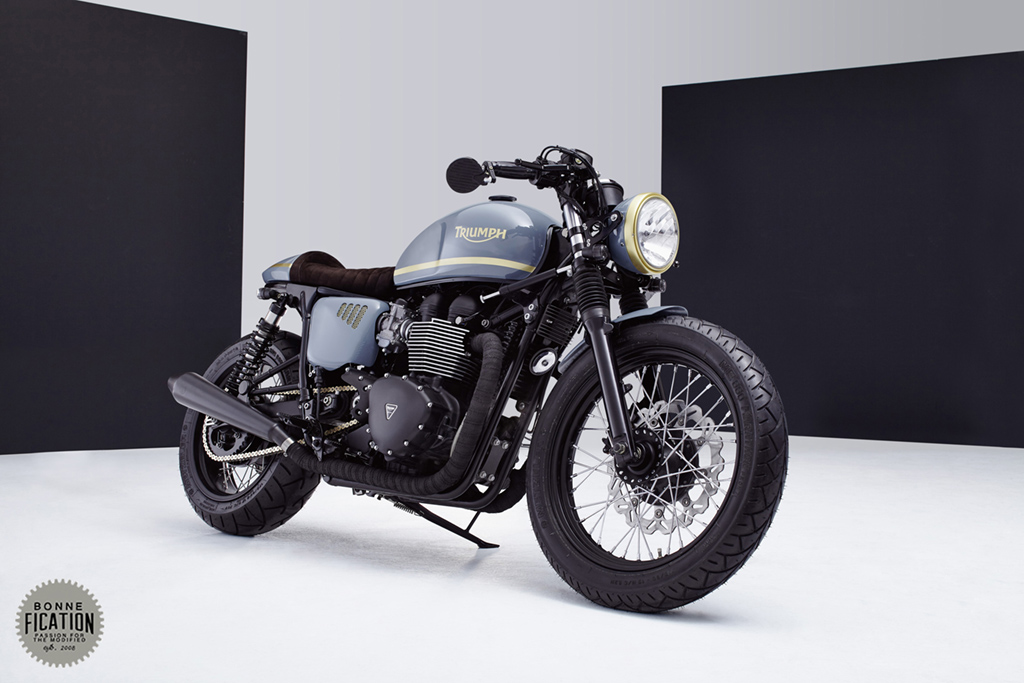 But it’s each to their own – in fact my own Scrambler may well be close to that 80bhp with its FCR racing carbs, custom open pipes and K&N filters, but I have no interest in getting it dyno tested, I don’t care what its making, its just fun to ride and sounds awesome, for me like many thats reason enough. 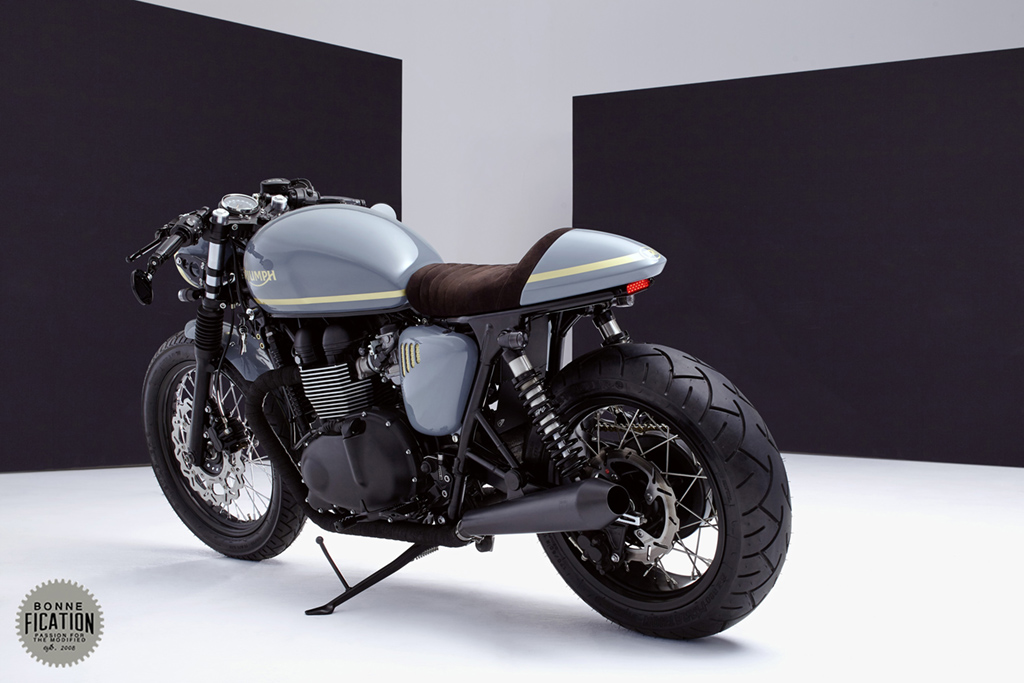 To achieve that 81bhp Mert Uzer and team at Bunker Customs replaced the stock air/battery box for an ARK (airbox removal Kit) kit and fitted a set K&N air filters which now hide behind those gold vented side covers. 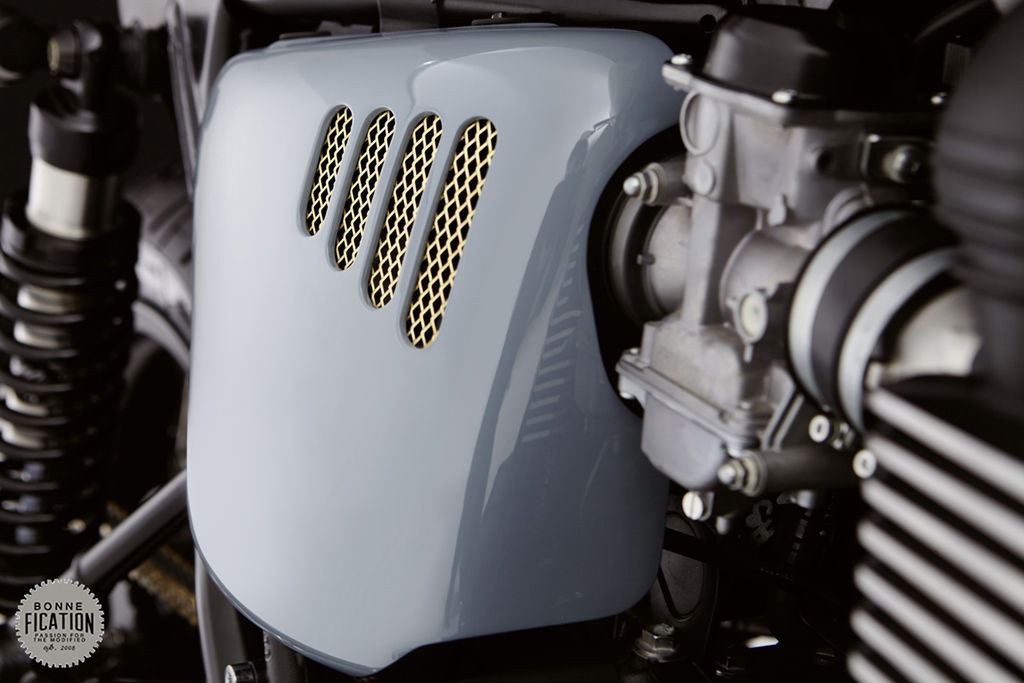 The T100 was then fitted with a set of British Customs Predators with wrapped headers – to get those performance upgrades running smoothly, the bike was also fitted with a Dynojet Power Commander V and then Dyno tuned. Finishing off the engine, the stock sprocket cover was trimmed down to expose what hides beneath. 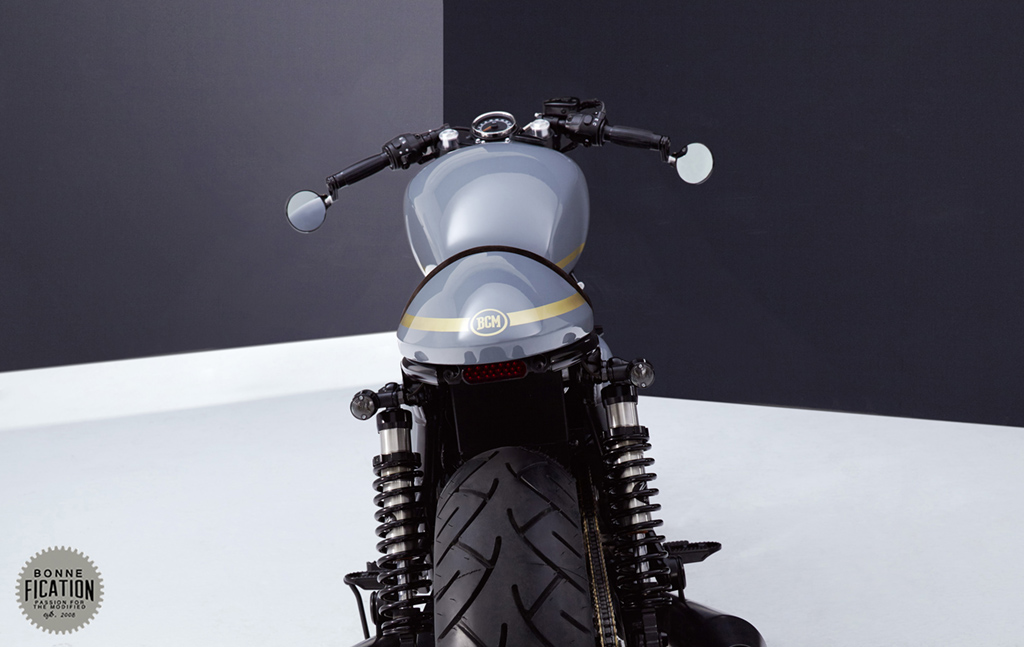 To transfer the increased HP onto the black stuff the rear rim was replaced with a wide 5.5″ x 17″ inch non-dimpled aluminium rim, with both wheels being shod with Metzeler ME880 Marathon tires with the rear being a 180/55/17. 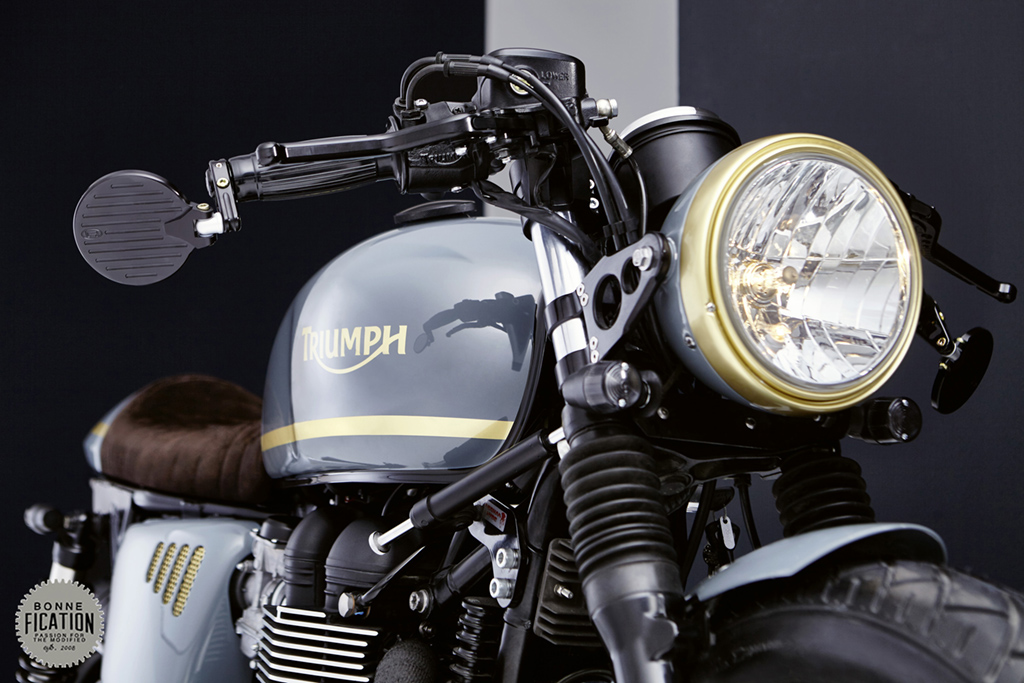 Handling upgrades included a Norman Hyde steering damper and the fitting of progressive springs at the front with Hagon Nitro’s at the back – the T100 has also been lowered 2cm at the front by dropping the stanchions through the yokes, with the rear being raised 2cm using longer shocks, giving this Bonneville a more ‘aggressive stance’ 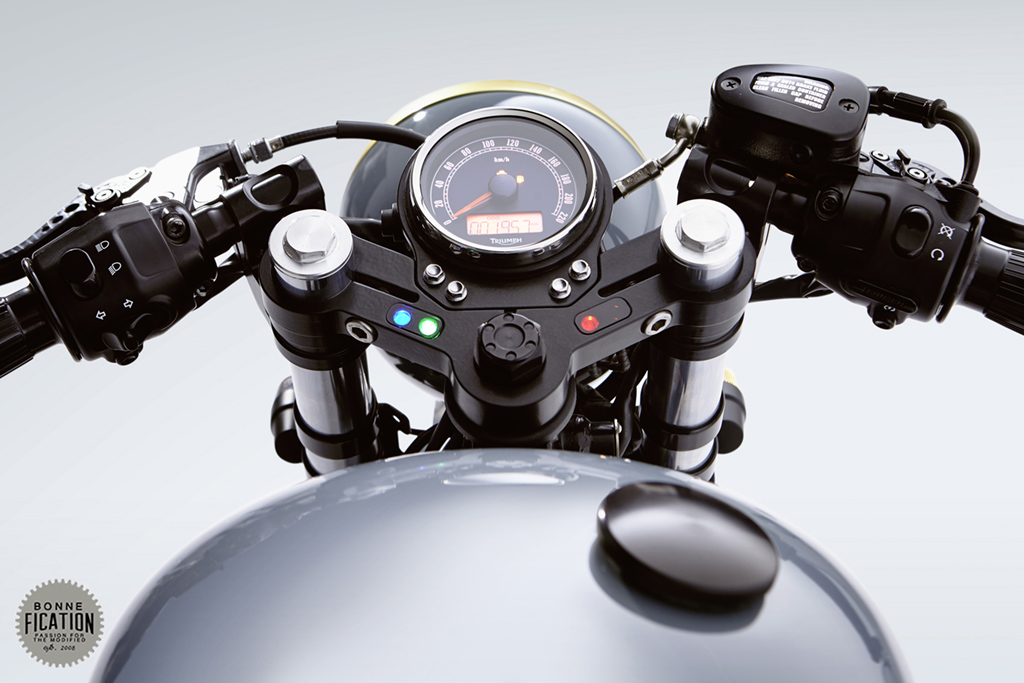 Once the power and stance was in the bag it was time to make that 81bhp look good. At the front the mudguard has been replaced with a short custom item in aluminium, with top yokes being swopped for a custom CNC item which has been fitted with a Brtish Customs single speedo mount with the top yoke also incorporating the relocated idiot lights as the guys at Bunker chose to ditch the tachometer. 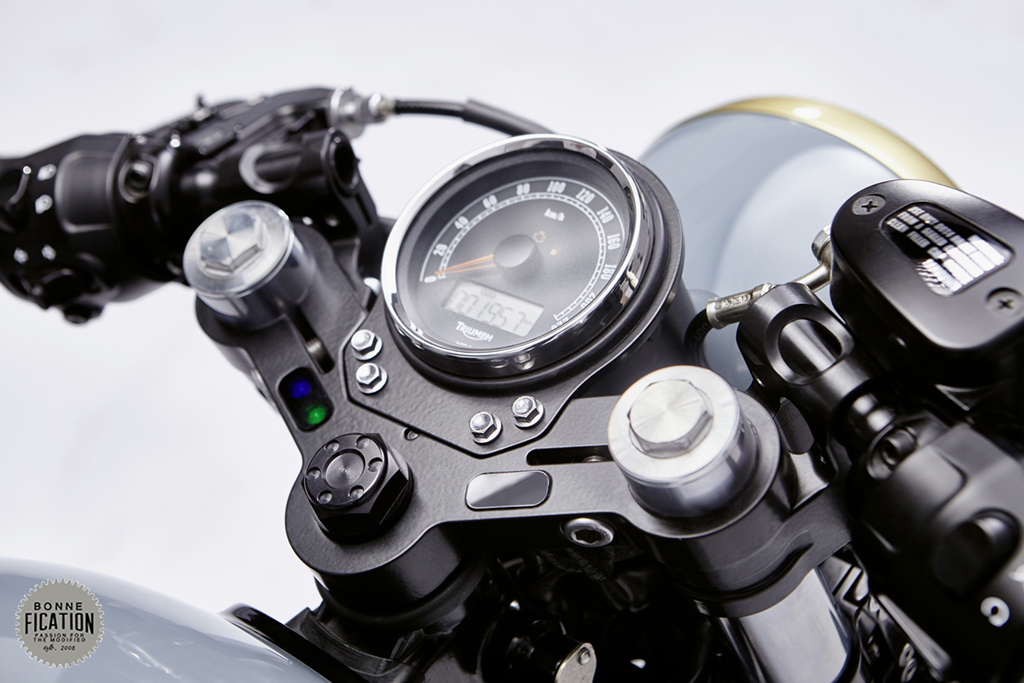 To give the T100 a much lower profile, the front headlight has been lowered and recessed using a shorter mounting brackets. The OEM bars have been swopped for a set of LSL Clip On’s and fitted with the stock switches, Beston style grips all topped off with a set of Joker Machine folding Bar end Mirrors. 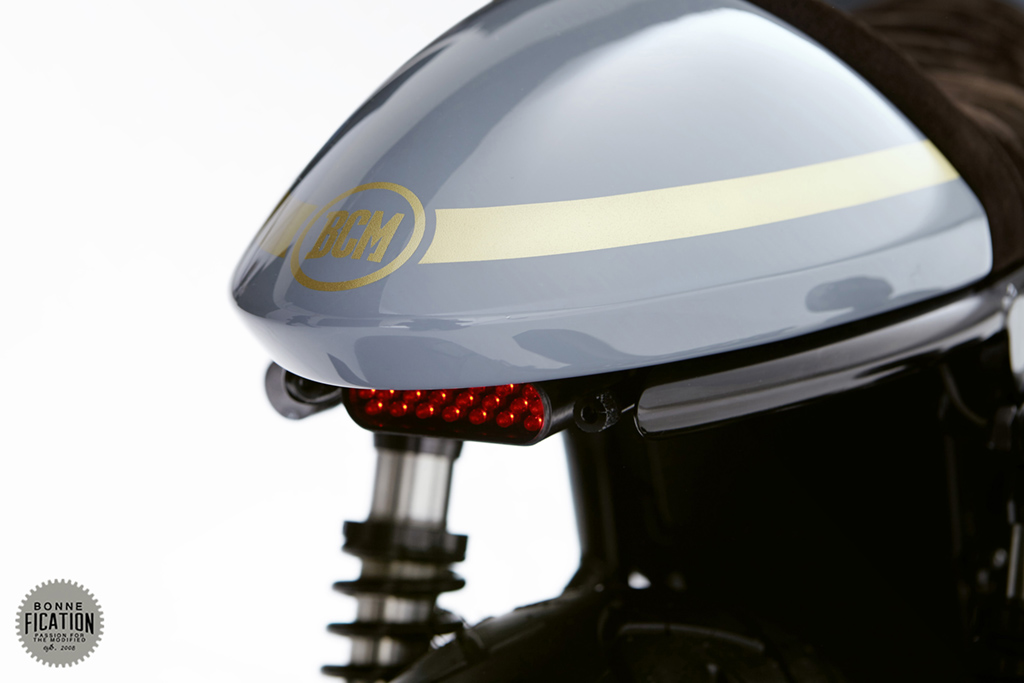 At the back, and as you would expect the bike was shortened with the rear frame being reshaped to match the custom gel seat and alloy cowl which incorporates a custom CNC milled LED stop lamp which sits between the two mounting bolts securing the single seat to the frame in the same way as a stock bike. 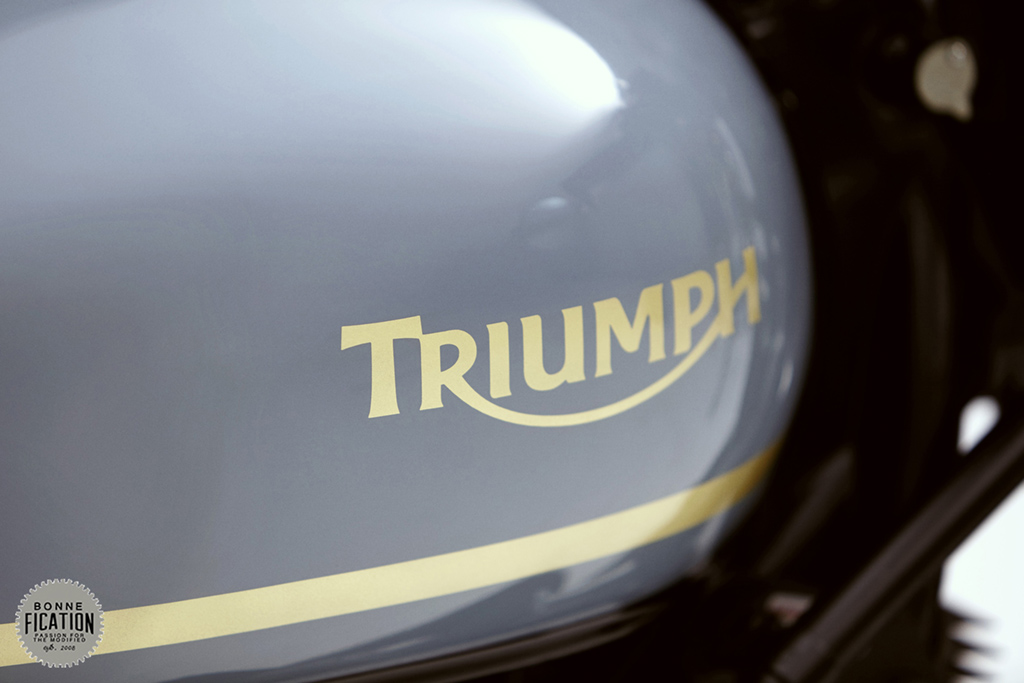 To finish the bike off the bike has been adorned with all the usual relocation Brackets from Joker Machine, British Customs, Biltwell and finally finished a very nice blue/grey and gold paint scheme…. Beutiful!…. Though if she was mine I think a set of classic Firestones would set the bike of a treat!