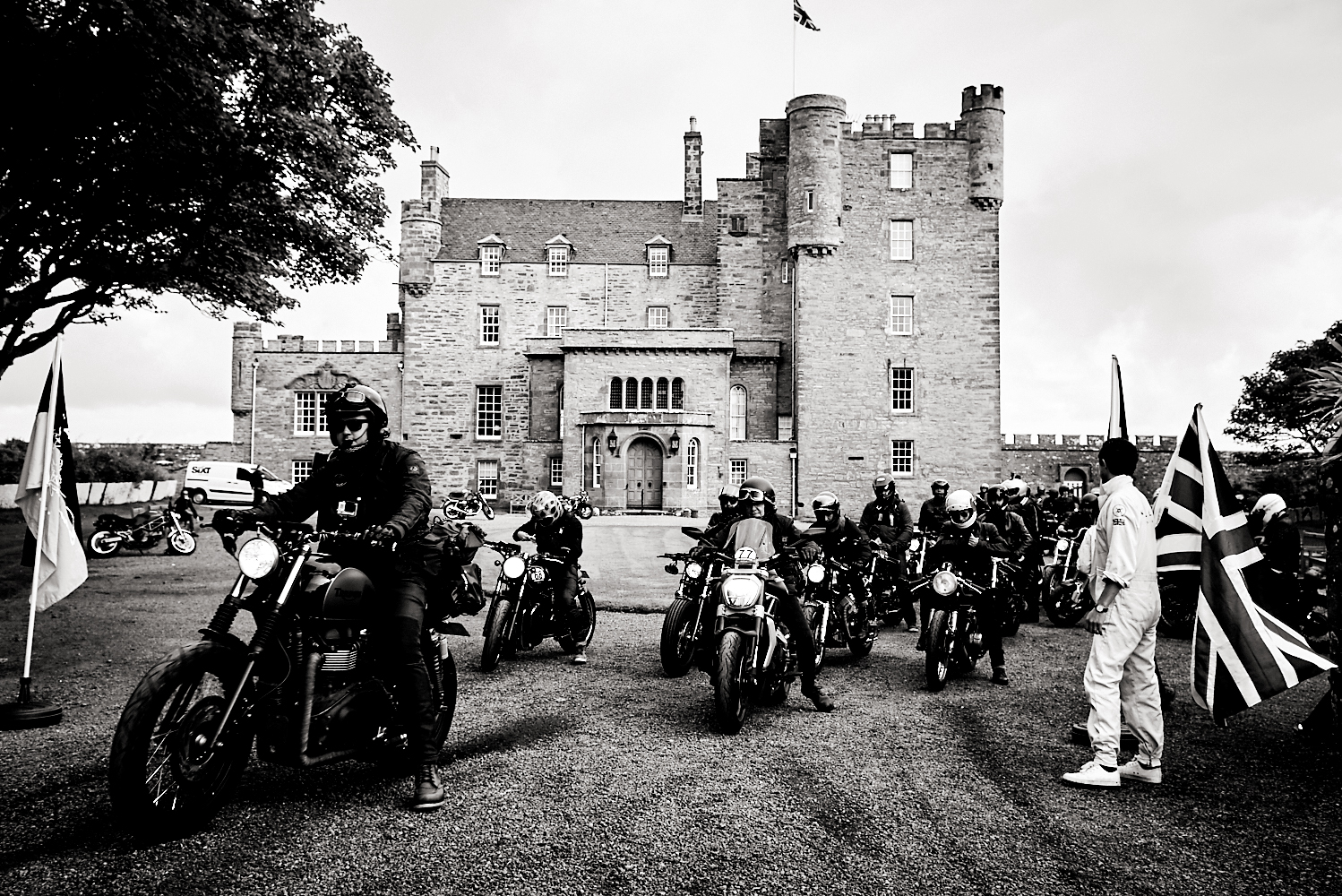 I’m sure many of you have heard of, or perhaps been to and competed in the Malle Mile, a super cool motorcycle shindig held just outside London at Kevington Hall.  A two-day get-together described as a ‘motorcycle exhibition in motion’, which was started three years ago by Robert Nightingale and Johnny Cazzola – the two chaps behind the motorcycle luggage brand Malle. The Mile has become one of the motorcycle must-go-to events, much like the Bike Shed Show and Wheels & Waves, and should certainly be in every classic, custom, and retro motorcycle enthusiasts diary. 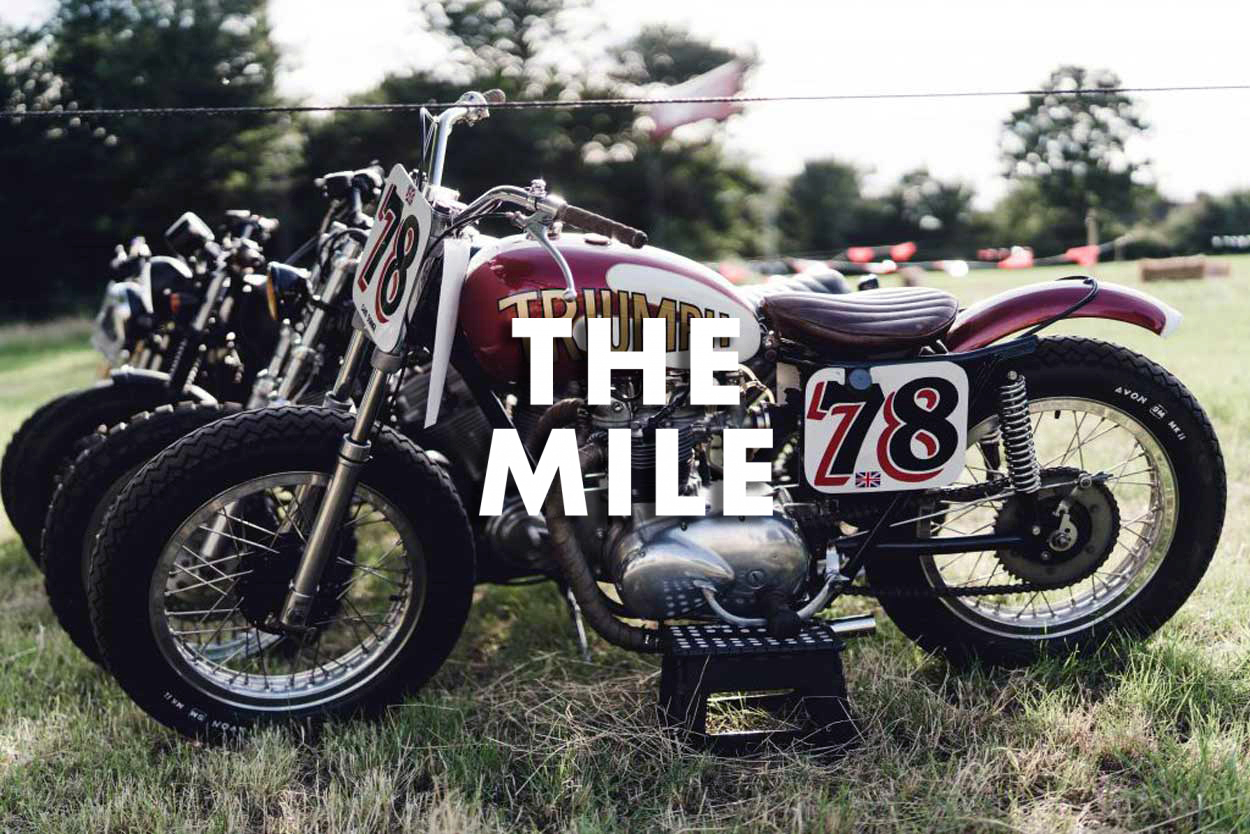 Malle London also organises another event called the ‘The Great Mile’, ‘the longest motorcycle rally in the country’, a 1200 mile jaunt from the northern tip of Scotland to the southern tip of Cornwall. Much like the Malle Mile, these brave and intrepid chaps along with 100 others are riding those 1200 miles on custom, classic and cafe racer motorcycles. 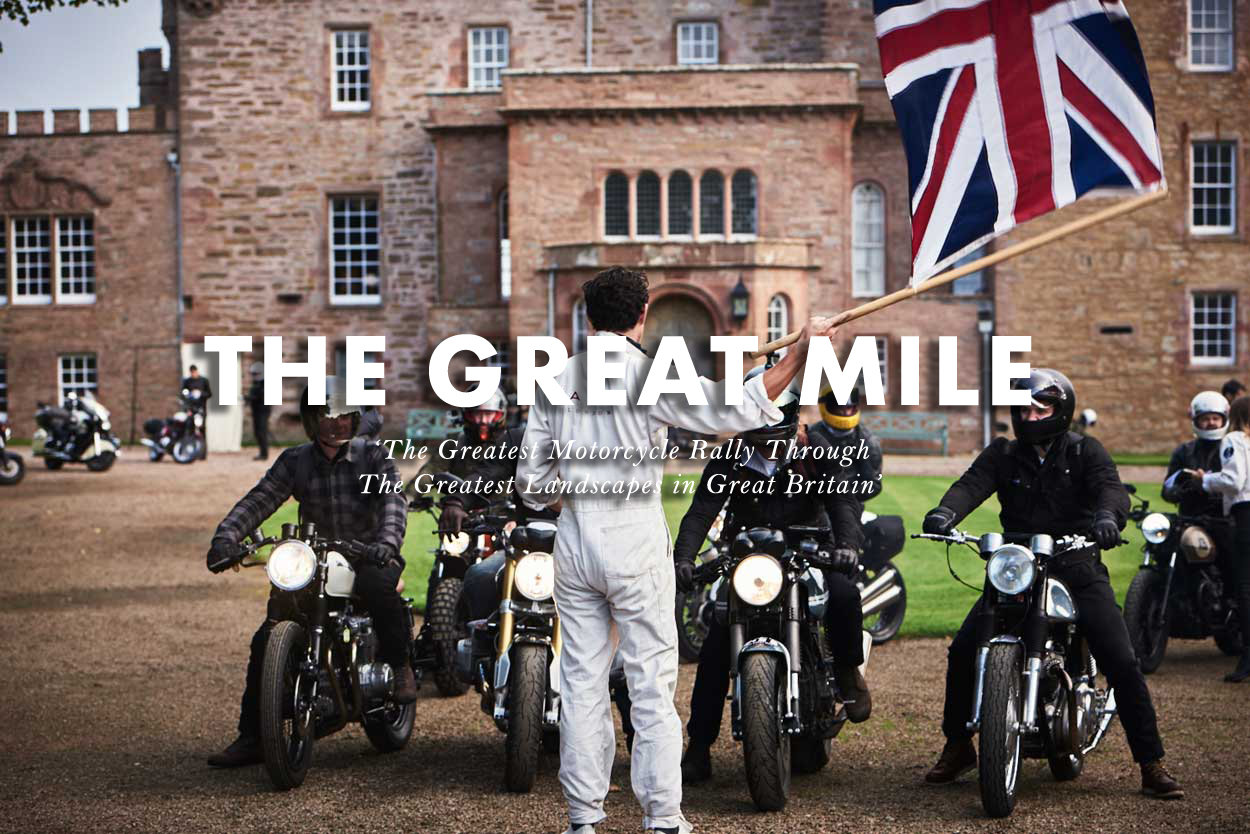 “We caught up with the race and hung out with the riders in their yurts that night, it was a really brutal race, but the excitement, camaraderie, and determination were contagious and my immediate thought ‘imagine this for motorcycles!’. The concept of hosting the longest motorcycle rally in the country was in motion. Twelve hundred miles from the Northern tip of Scotland to the Southern tip of Cornwall, via the Lake District, Snowdonia etc. only on the best and smallest B-A roads. 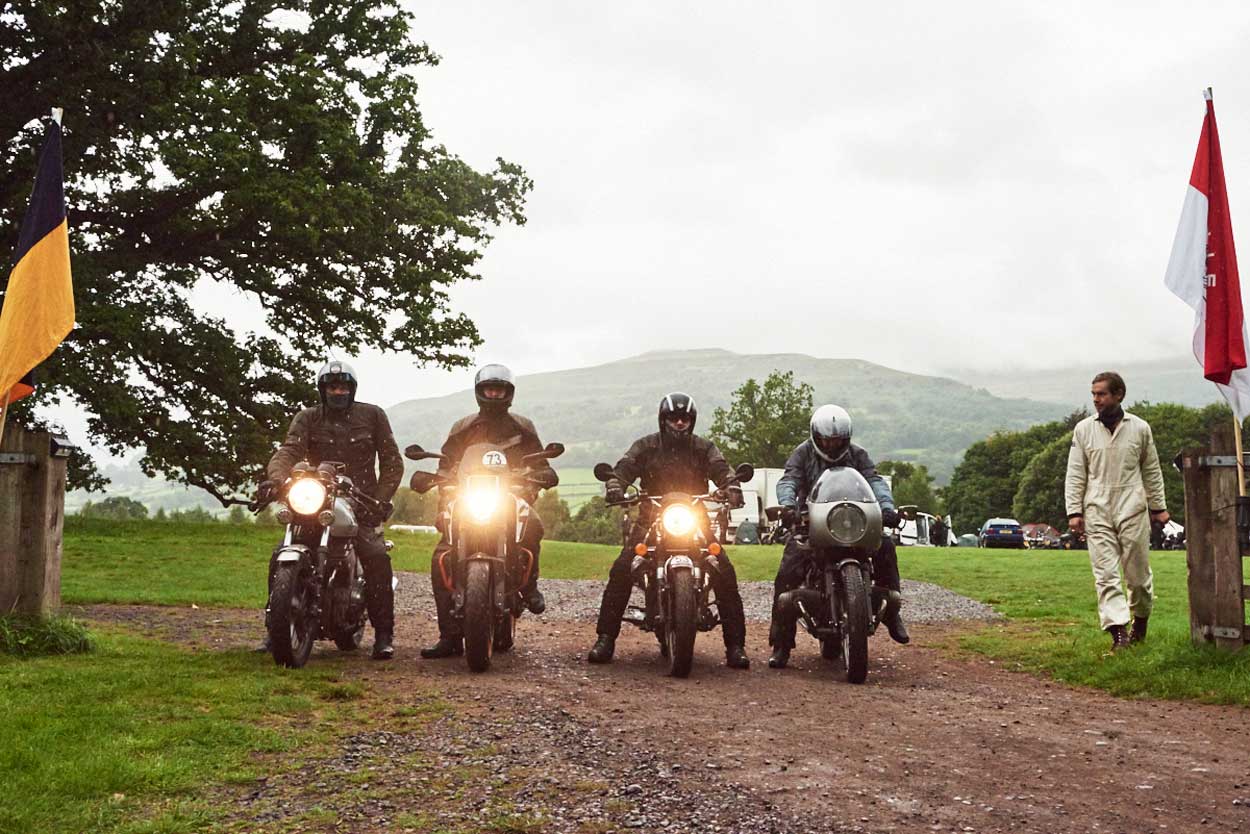 It took a while to convince the entire Malle team that it was a good idea or at least possible to host a rally of that distance – it was a very ambitious project. It’s a serious military-style operation to get 100 riders, 100 motorcycles, plus equipment, tents, supplies, medics, engineers, marshals and support trucks 2500 miles up and down the country into the most remote (and beautiful) places”. 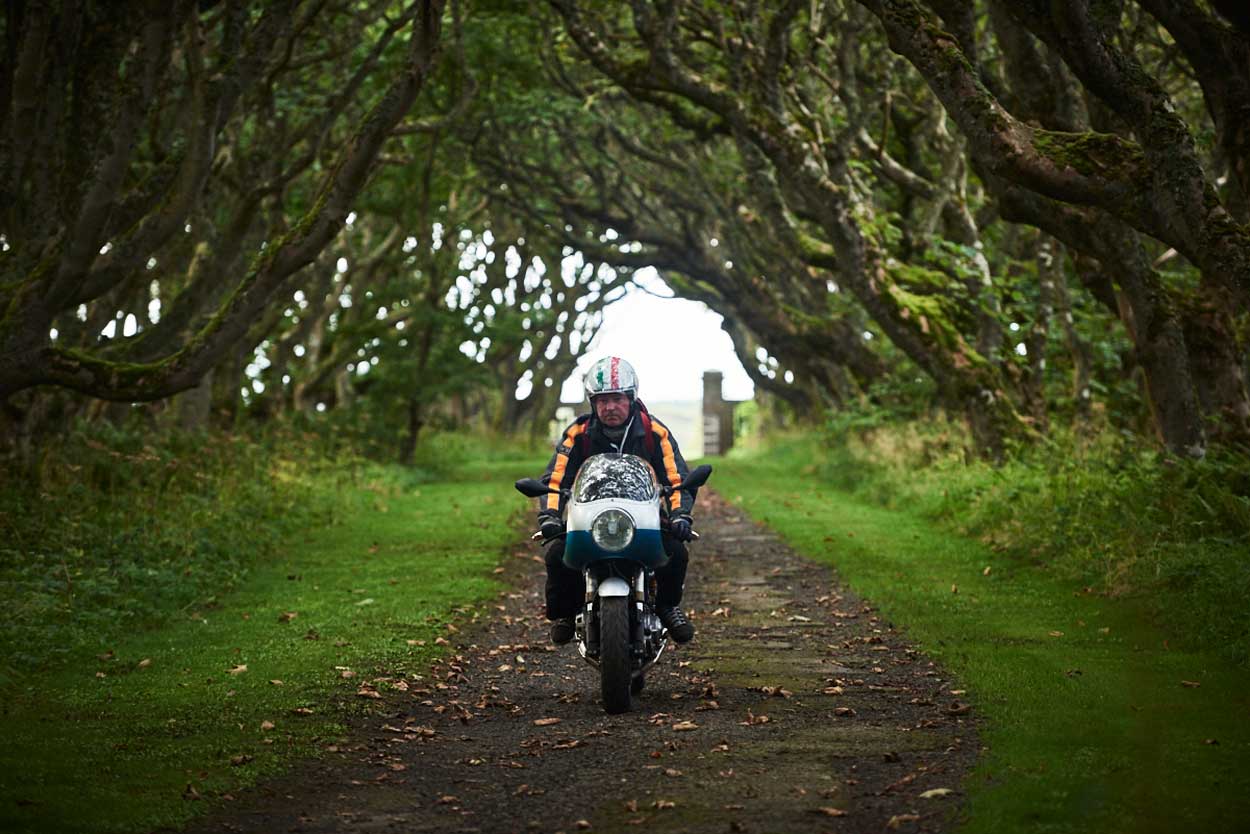 “Why host the longest motorcycle rally in the country?”
Over the last couple of years, there’s been a lot happening politically and globally focusing on negative concepts around separation, walls, bans, and exits etc. We wanted to create something that brought people from all over the world together, to celebrate the best parts of the United Kingdom through the connecting thread of the motorcycle and the passion it instills in each of the riders and our team. 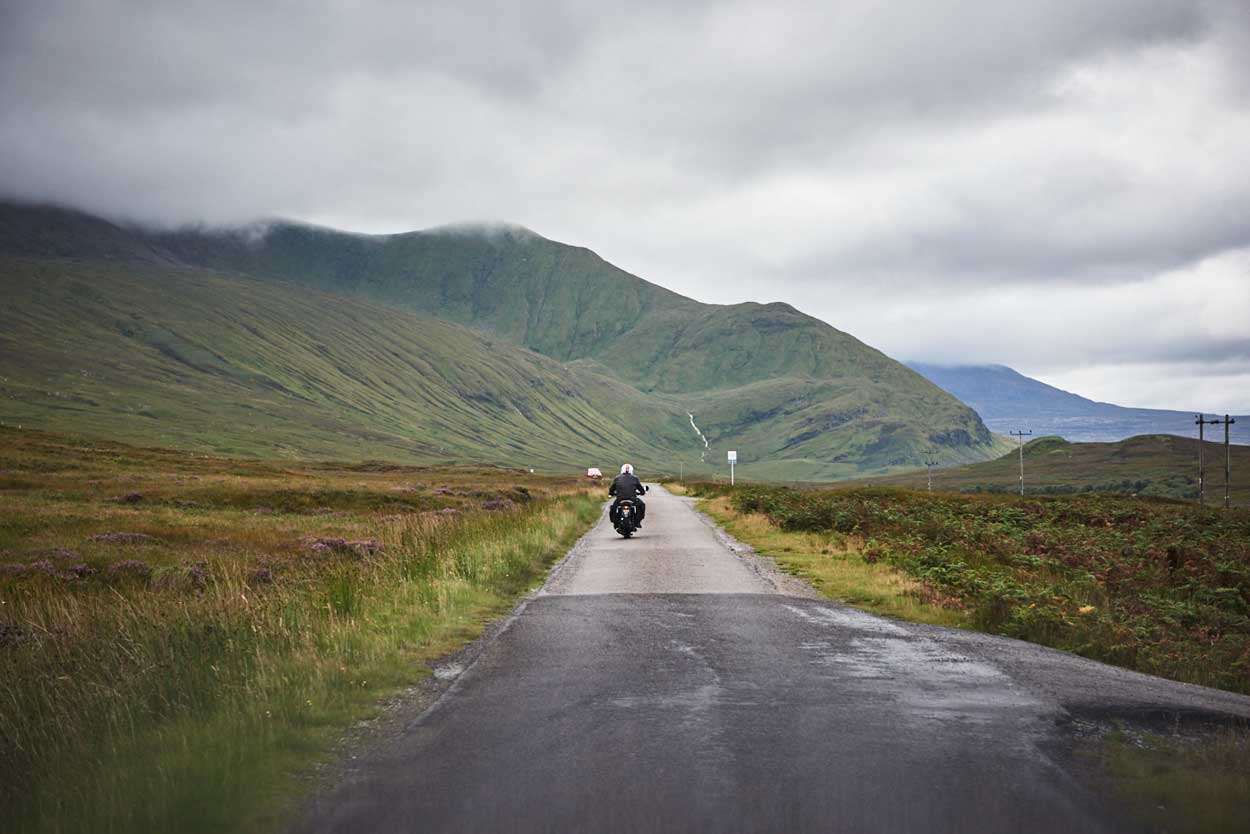 There are so many beautiful and inspiring landscapes in the UK, you don’t always have to head for distant lands to find true wilderness, fantastic riding and ‘adventurous’ weather conditions! Fifteen countries were represented in the rally, with riders coming in from New Zealand, South Africa, the U.S and other European countries and many new friendships were created in all of the teams”. 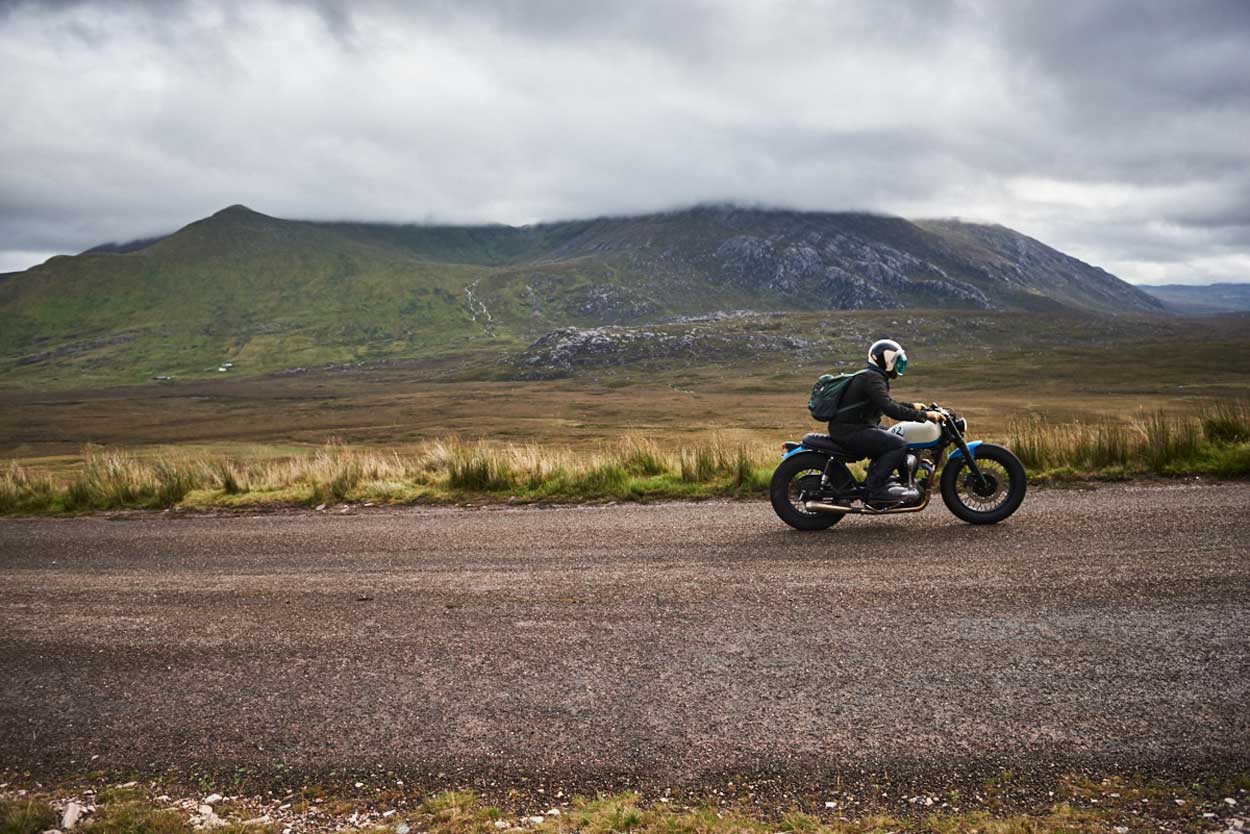 “How did The Great Mile come about?”
We’ve been hosting the shortest motorcycle race in the country for a few years called ‘The Mile’, for very inappropriate; custom, cafe and classic motorcycles, which has been developing each year into something quite unique. 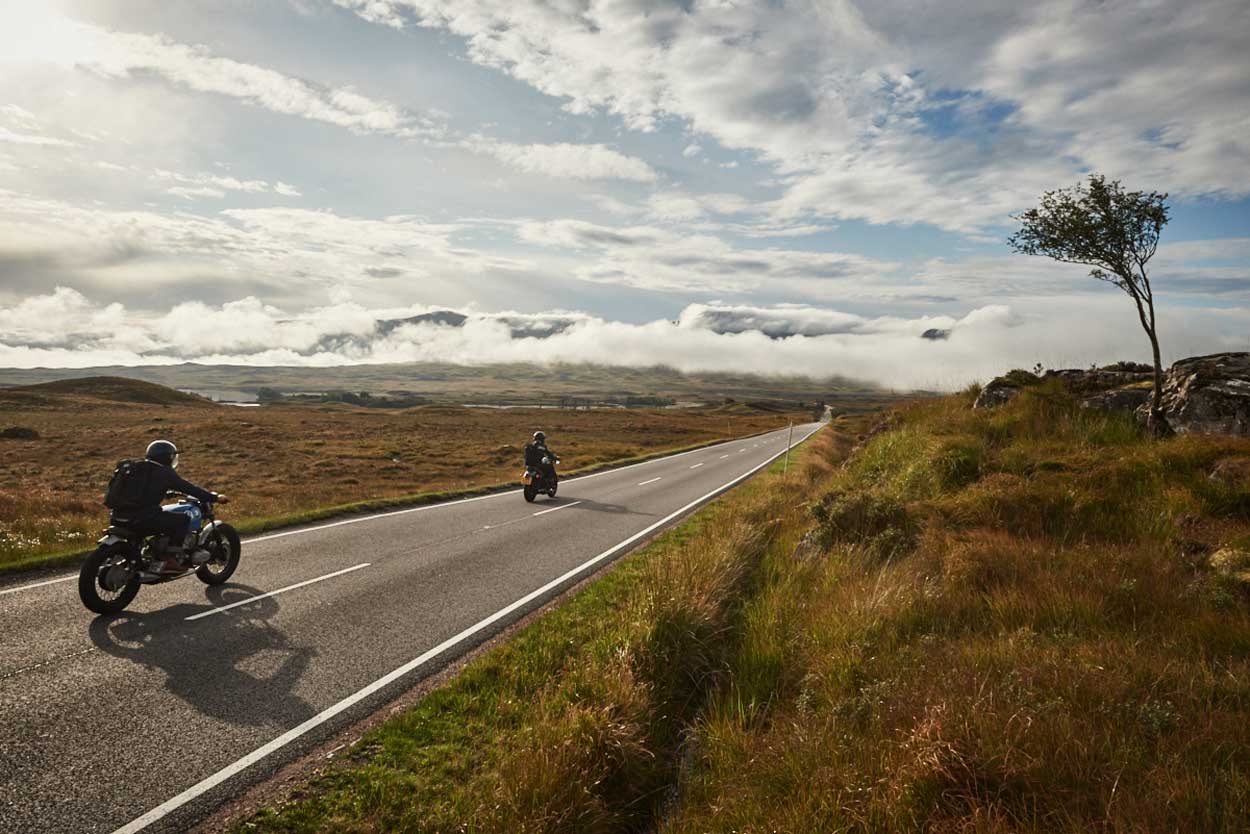 There’s a real DIY attitude to racing and a resulting camaraderie in the community of men and women around the race and the motorcycles. We’d been thinking about doing something different for ‘The Mile’, then I was on a research trip to Mongolia with my wife last year. We’d been driving across the Mongolian steppe for a few days across the endless grass-lands and we saw two strange red flags up on a hill in the middle of nowhere. We found out it was part of a 1000 km horse race from Ulaanbaatar up into the Arctic Tundra”. 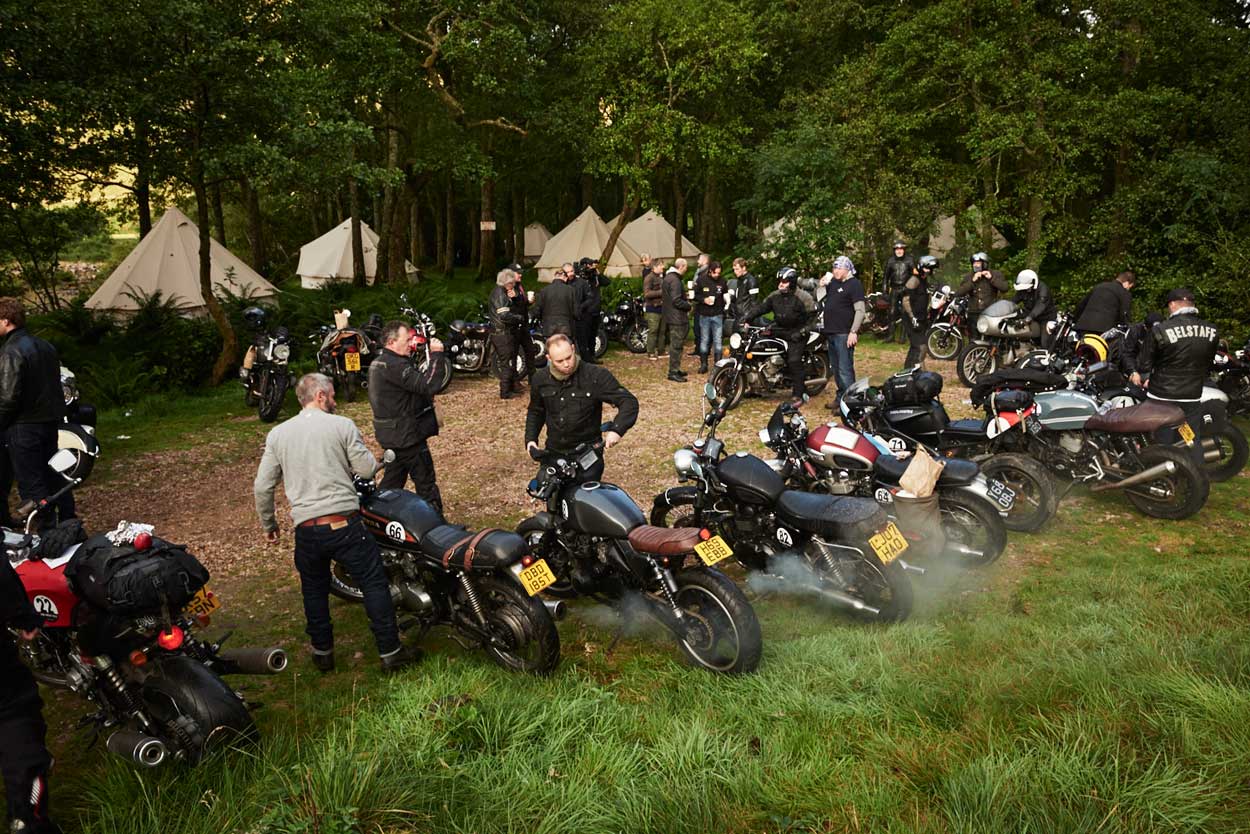 What was it like being in The Great Mile Rally?”
The rally began at the ever beautiful Castle of Mey, poised on the rugged coastline at the very Northern tip of Scotland and the top of mainland Britain. Eighty-two riders crossed the start line and four days later sixty-nine riders completed. The rally was seriously tough, it was beautiful and it was full of fantastic riding roads, but it was a real challenge for everyone involved to complete and it took real determination and endurance. Each night we were camping in very special places from a forest in Glencoe to The Glanusk Estate in Wales and the final cliff-top camp at The Lizard in Cornwall”. 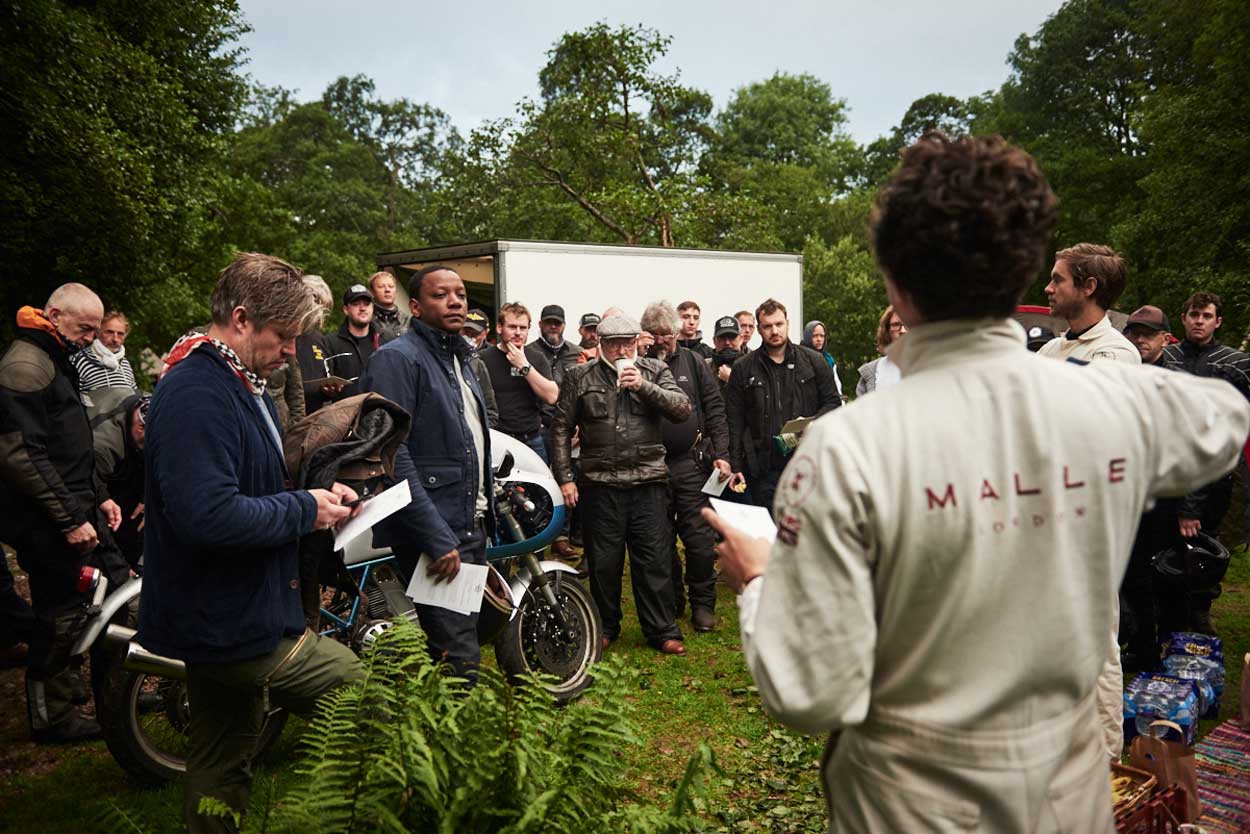 “When the final riders crossed the finish line and took off their crash helmets you didn’t know if they’d be laughing or crying! True to form the British Isles surprised us with very unpredictable weather and gave us the exact opposite of what we’d expected: Sun and relative warmth in Scotland and 12 hours of heavy rain and a thick mist across Devon and into Cornwall on the last day. The rally route was supposed to get slightly easier with each stage, but with those weather conditions, each day just got harder”. 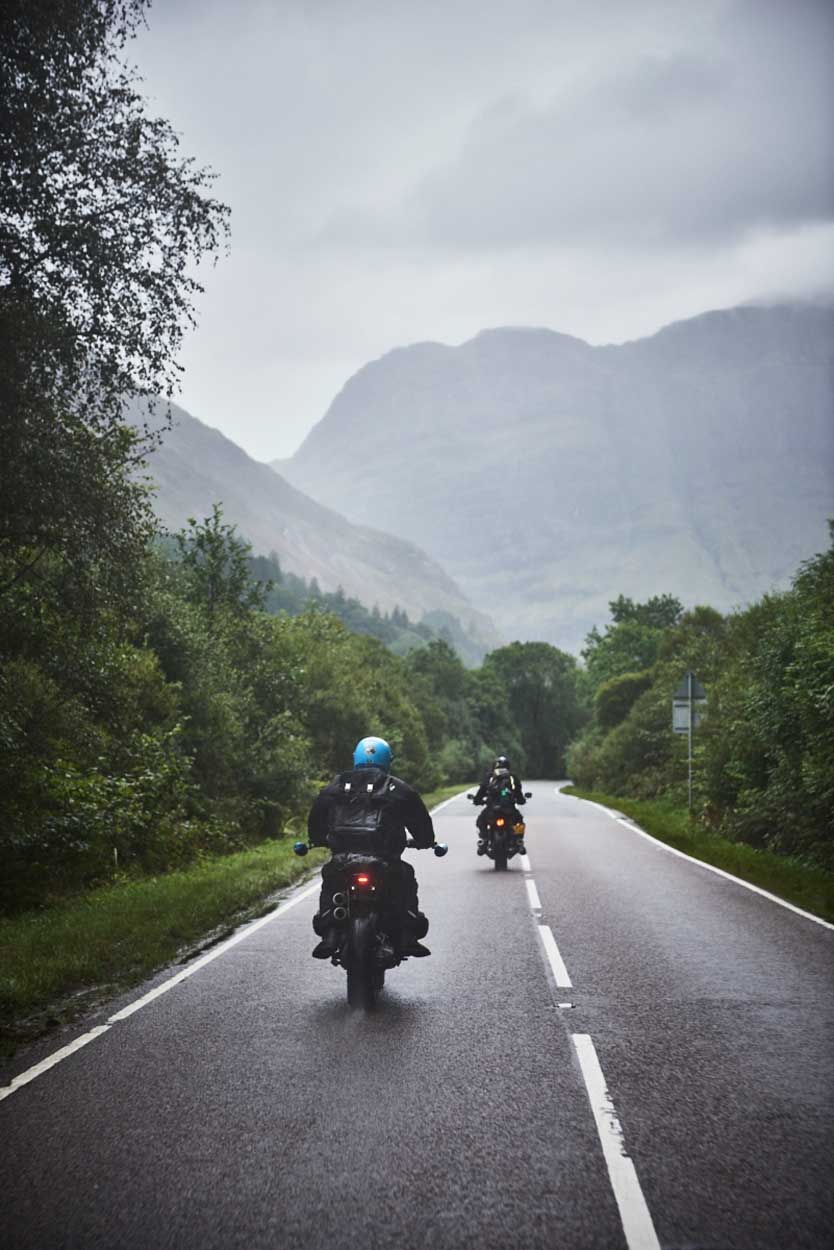 “Our fantastic engineering team ‘deBolex Engineering’ who normally build custom motorcycles were helping to fix bikes and were getting more than 10 motorcycles back on the road each day. One rider Steve managed to forward flip a vintage BMW R80 and got away with it, after some light fixing he was back in the rally (on a now “custom” deBolex bike) – Steve won the ‘The Great Stunt-man Award’.

One very determined rider Neville had built a gorgeous custom Ducati and had finished it literally hours before the rally began – unfortunately the engine wasn’t performing correctly and the bike limped down the rally route in stage one – turning up at the rally camp that night in the back of a guys transit van with an unperturbed and grinning Neville sitting next to it. Neville hitched a lift to Glasgow airport with our support team the next morning, flew to Birmingham, took a train to Bicester, got back to his garage, saddled up on his other bike and road 8 hours North to the rally camp in Wales (getting in before the last teams that day) and completed the rally – Neville won the ‘Most Dedicated Rider’ award. The Squadro Otto team won the rally, completing the entire route and each checkpoint with the closest time to a perfect run”. 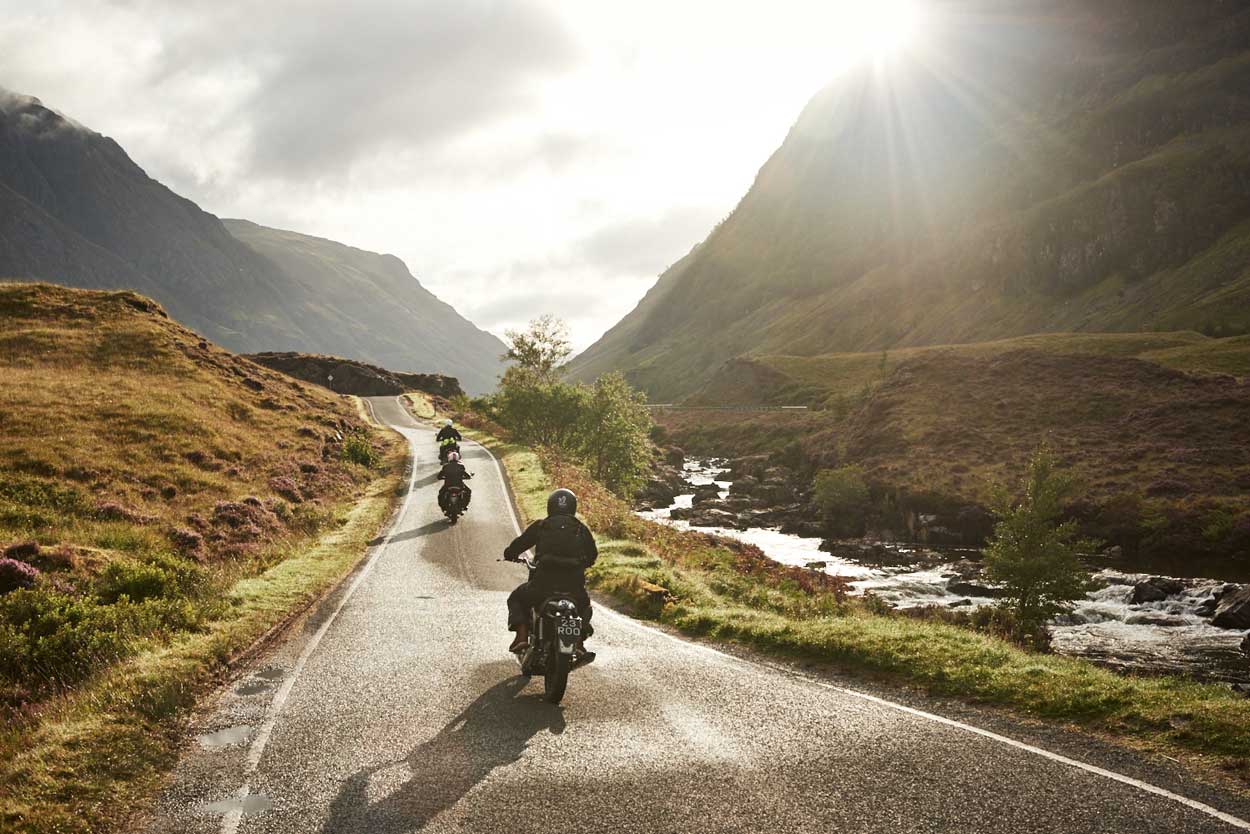 “What is it that you love about riding motorcycles?”
Jonny Cazzola (the other founder of Malle) and I had ridden the rally route on our Triumph Bonneville’s in 2016, researching the route and thoroughly testing the latest Malle luggage collection in the process. 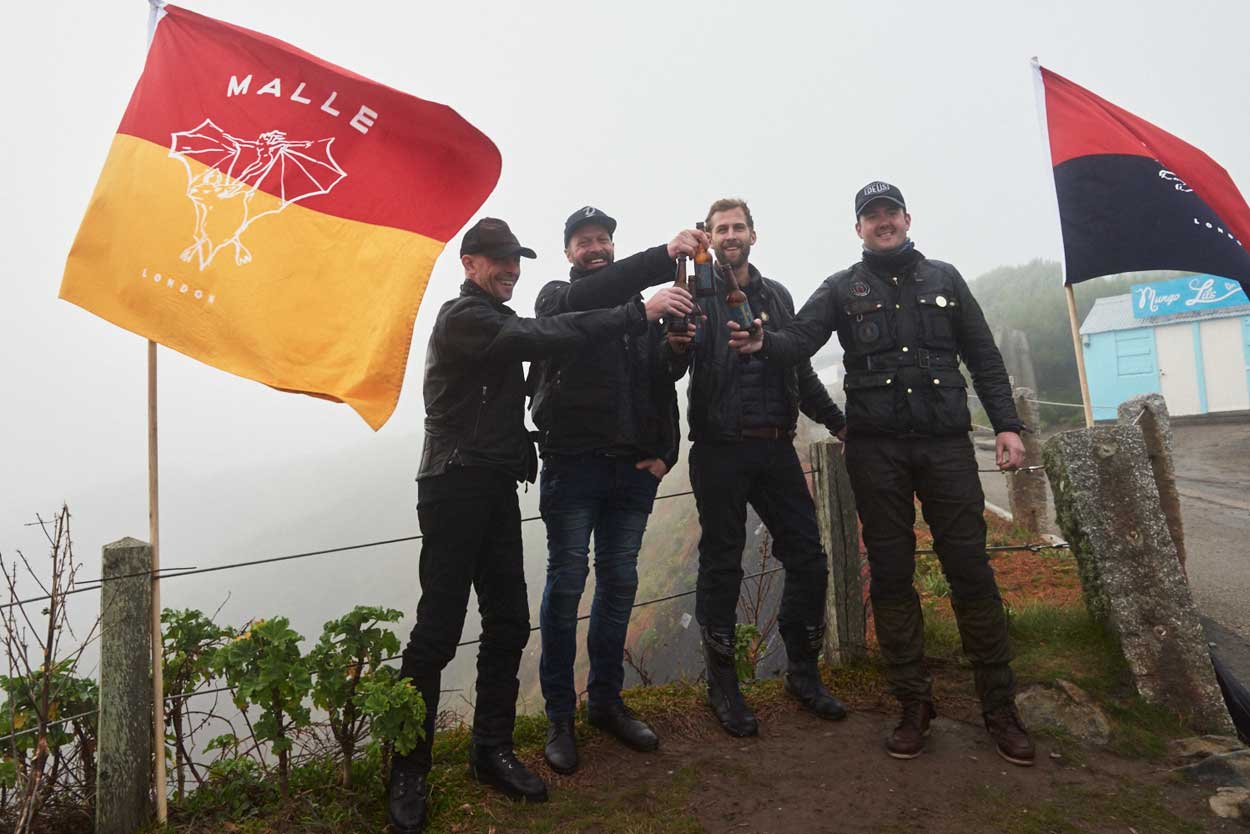 When we were riding across Scotland looking for the best riding roads, we rode down into Glencoe, for a few seconds, these magnificent Stags were running alongside us. You’re hovering 6 inches above the road with the bike beneath you and only the sound of the wind all around you, it’s about as close to flying as you’ll ever get. On the bike you’re in the landscape, there’s no barrier, no frame, no border – you’re part of the landscape for that moment”. 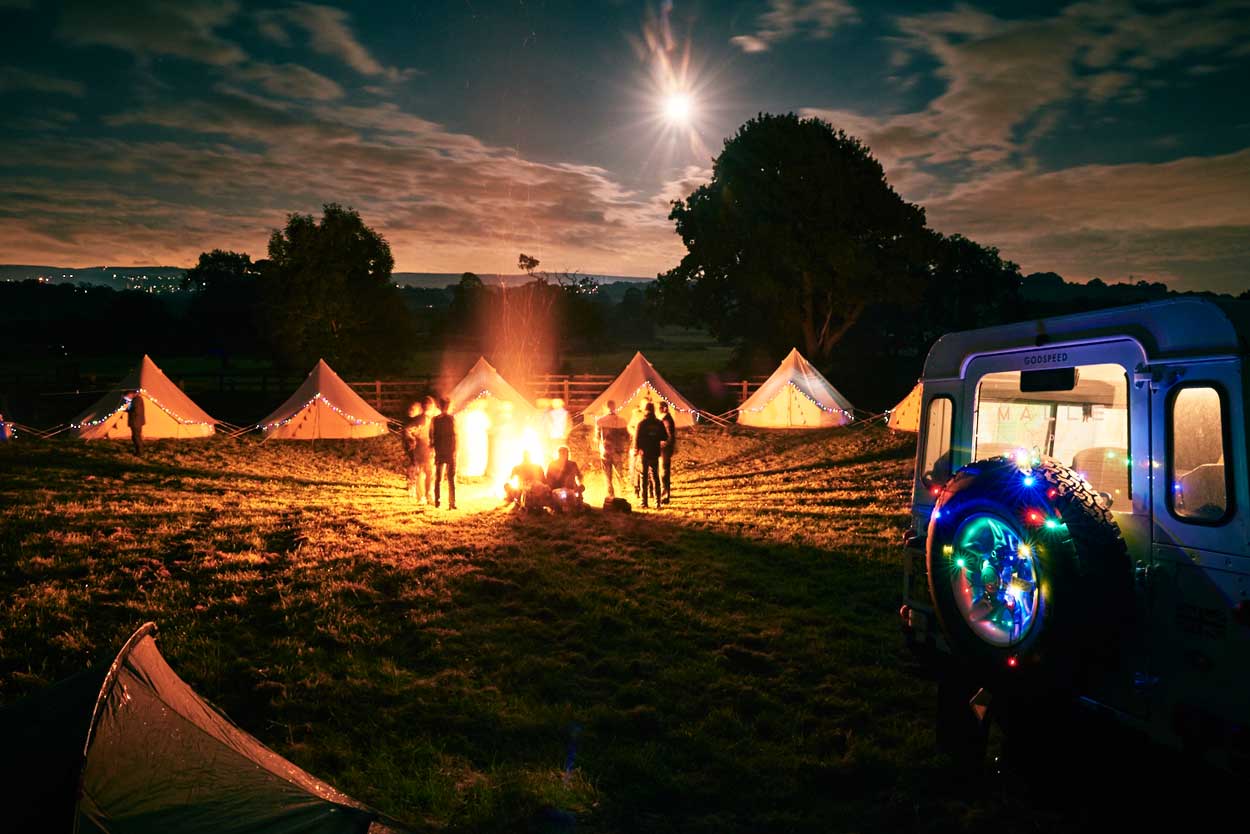 “Who is the average Great Mile rider?”
There really wasn’t a typical rider in the rally. We had older riders in their mid 60’s who have been riding for 50 years, we had new riders in their 20’s who have been riding for a year or less. Men, women, brothers, fathers and sons, company teams, Mark Upham from Brough Superior was riding his 1927 SS100 Brough with his daughter Victoria and the only thing that connected us all is the love of two wheels and the desire for adventure. 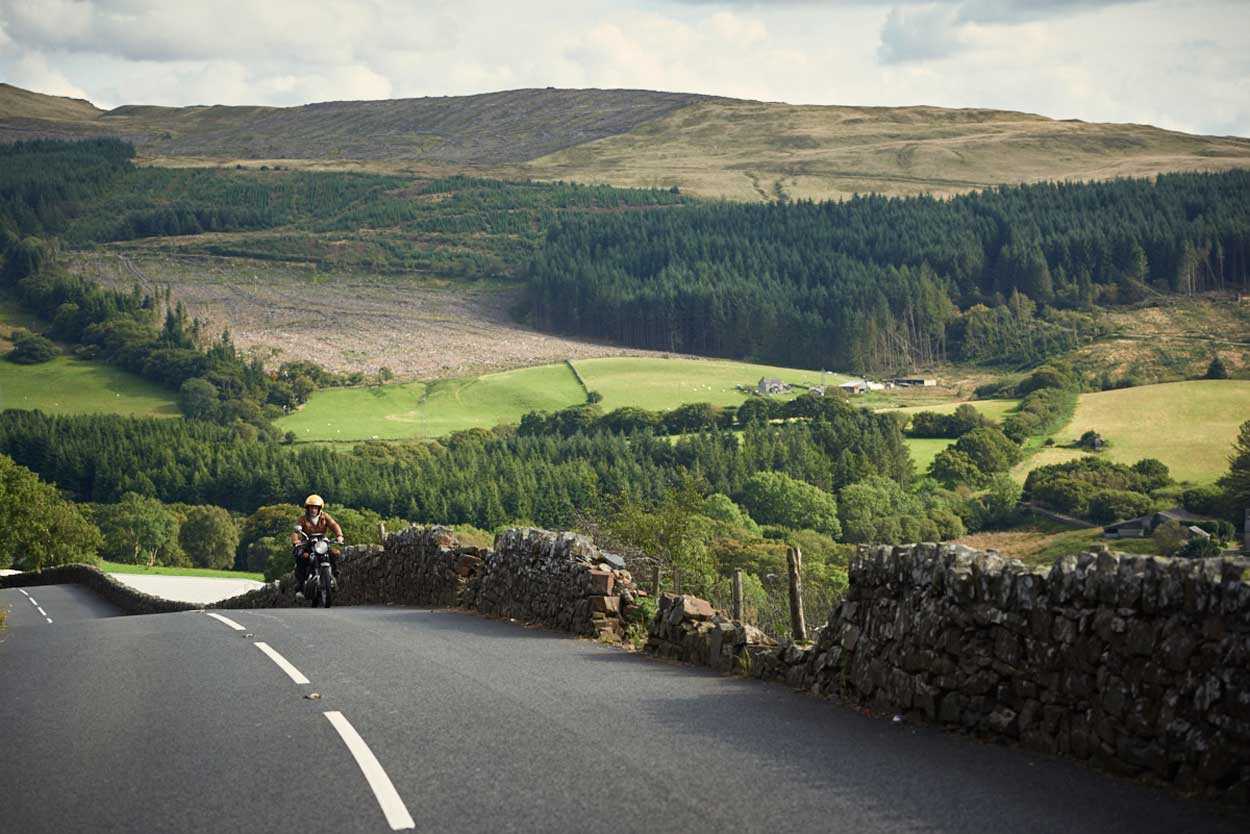 “What’s in store for the future of The Great Mile?”
It’s been a few month since the rally and I can now look at a motorcycle again. After 10 days living in the back of one of  our Land Rover support trucks, 4 hours sleep a night, each morning our team of  devoted marshals always had the challenge to get out early and get  ahead of the rally to set up the checkpoints and support the bikes along the route, it certainly tests your “allegiance” to motorcycles”. 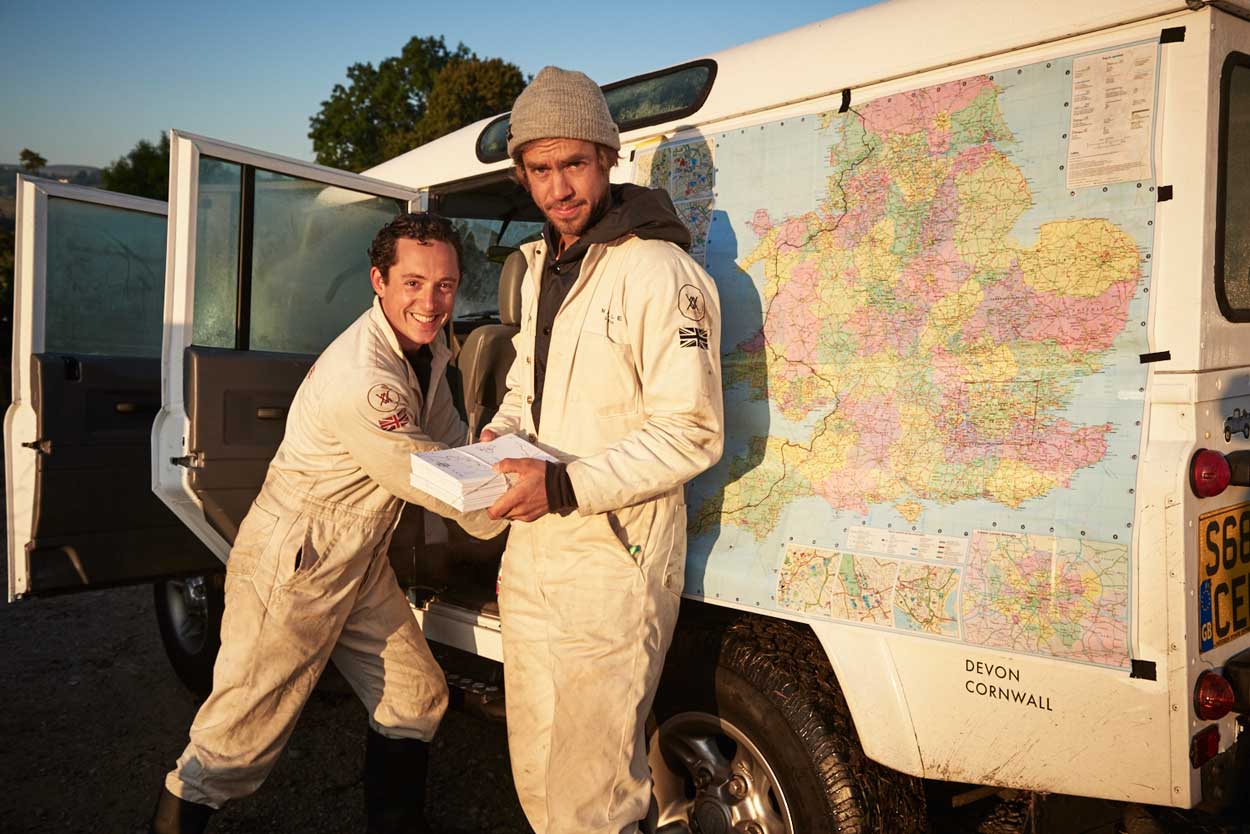 “Now we’ve recovered we’re already starting to think about how we can make it better, make it a challenge to complete and more time for riders to meet each other at the rally camp each night – so many wonderful people there. Many of the riders have been giving us great tips on what they want from the rally experience next year, there’s been talk of making it a 5 day event, possibly down the Irish Coast, with a new rally route that may start at The Lizard and end at the Castle of Mey, with timed challenges at each stage. We’re already looking forward to The Great Mile 2018, we’re not sure where it will be exactly, but it will be tough, it will involve a lot of beautiful riding in every weather condition the UK can throw at us and it will be great”.