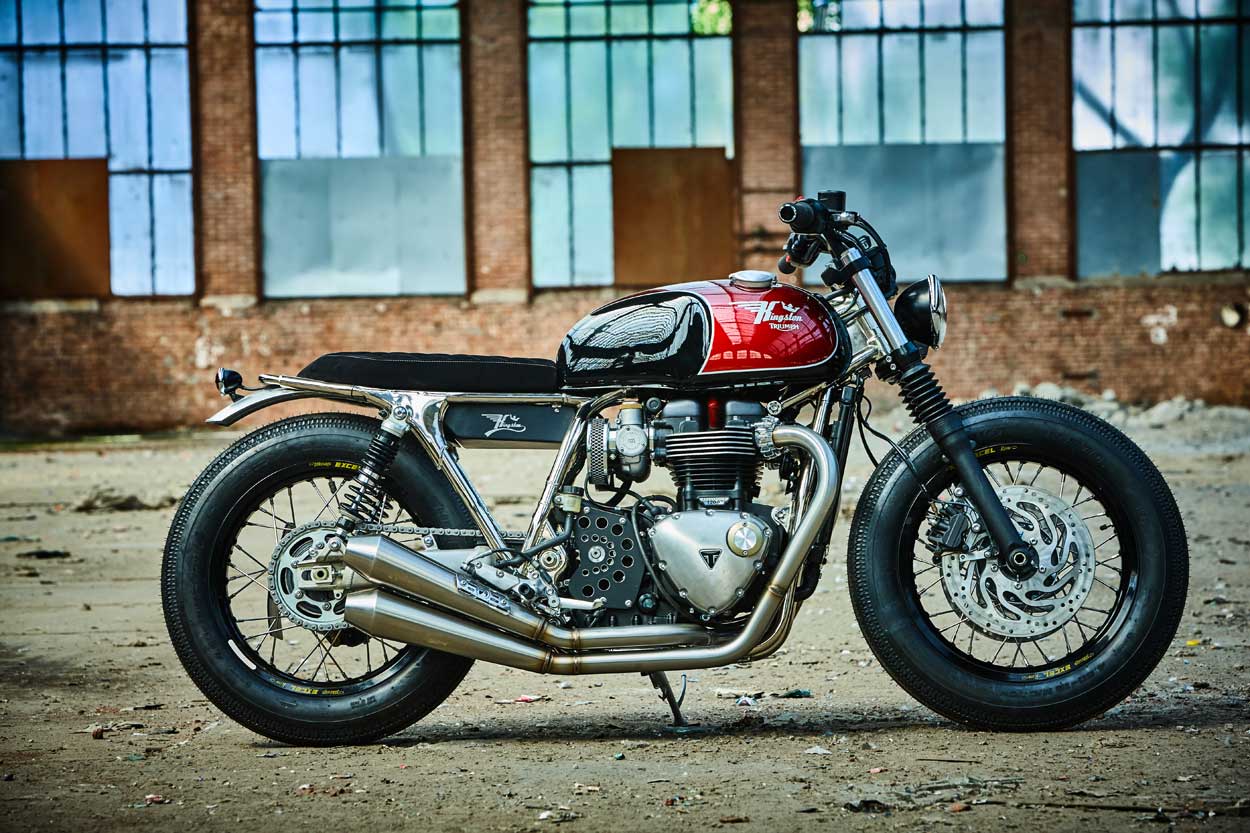 The new water-cooled 1200cc Triumph Thruxton is undeniably a superb motorcycle out of the crate, but when it comes to being customised, I didn’t feel it was the pick of the Classic Twin line-up. The entry-level Street Twin and T120 I felt offered better starting points. Two Triumph Twins, which unlike the Thruxton models are comparative blank canvases waiting for a builders creativity. 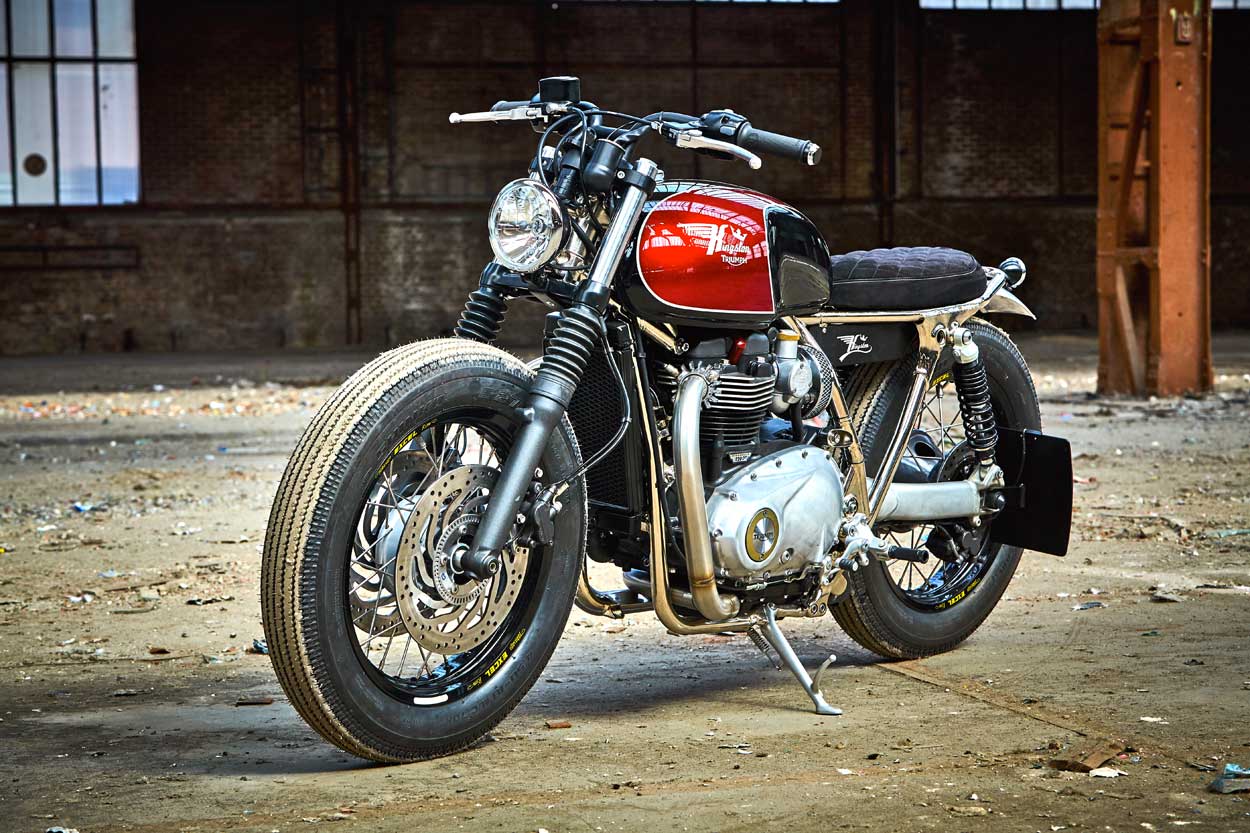 Also, many of the custom Triumph Twins we feature here on Bonnefication.com focus on style, and not performance. And the stock Thruxton and Thruxton R, with its improved handling and that cool Café Racer styling, offers both as standard. A Triumph Twins built to look good and to be ridden fast, what more do you need? 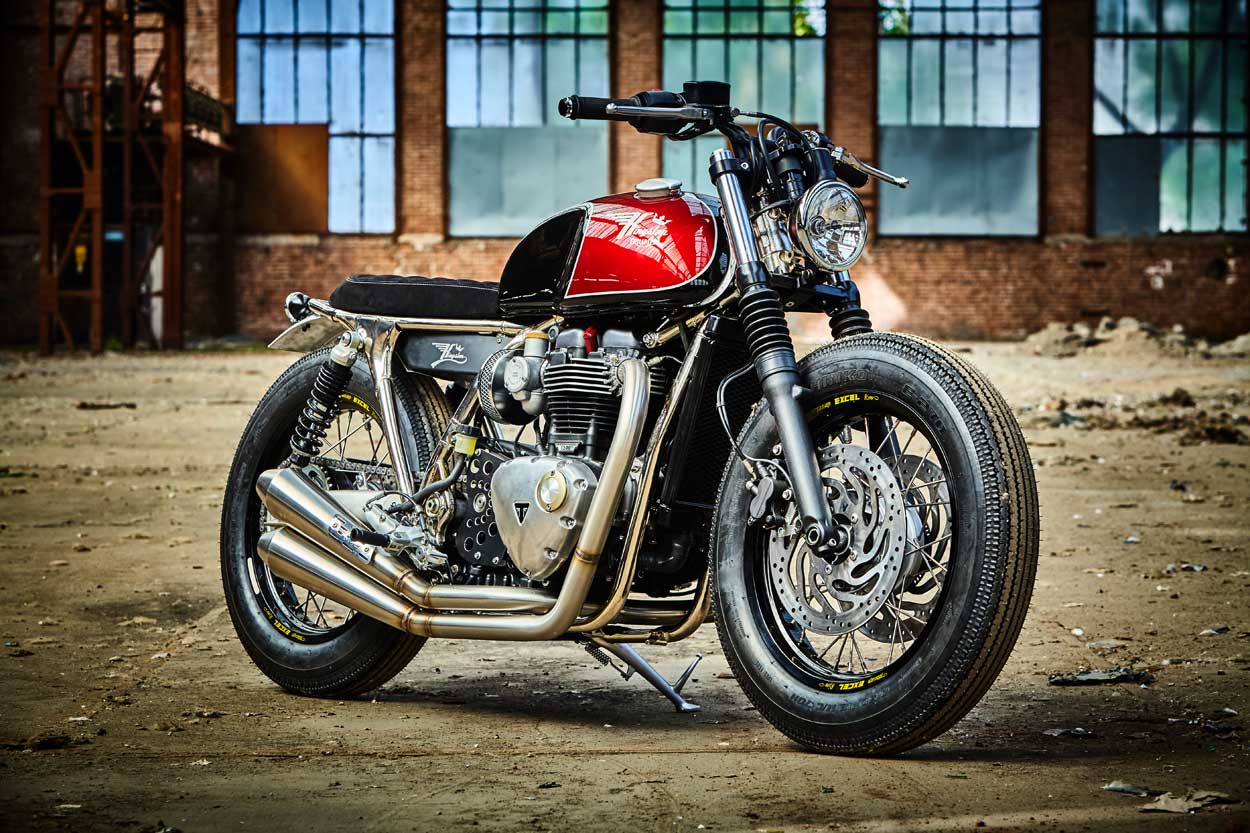 Though when a customer handed Dirk Oehler, the man behind Kingston Customs a brand new Thruxton saying; ‘do what you want’ – for Dirk, continuing with that obvious Café Racer vibe wasn’t an option. 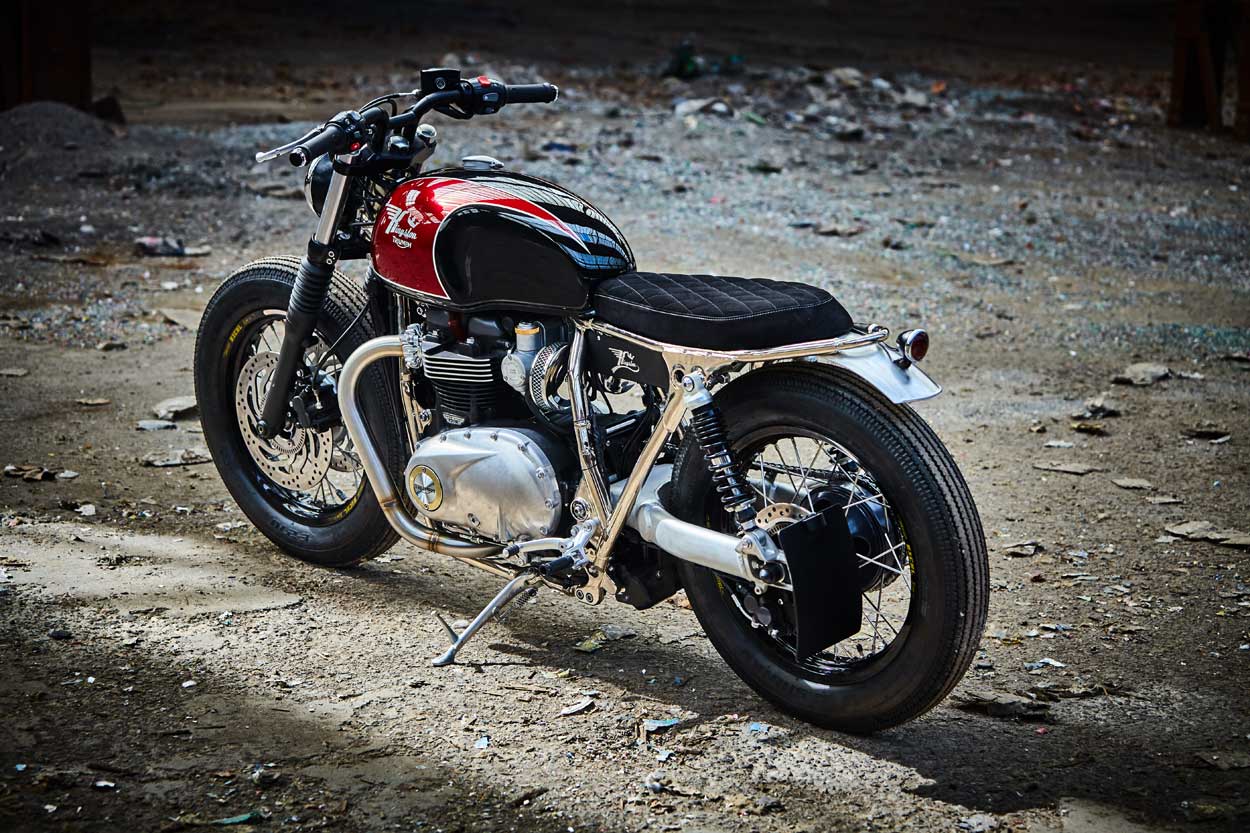 What this Kingston Thruxton went on to do, is highlight its beauty, not its performance – a build which changed my view of the Thruxton as a starting point for a Custom Hinckley Triumph Twin. 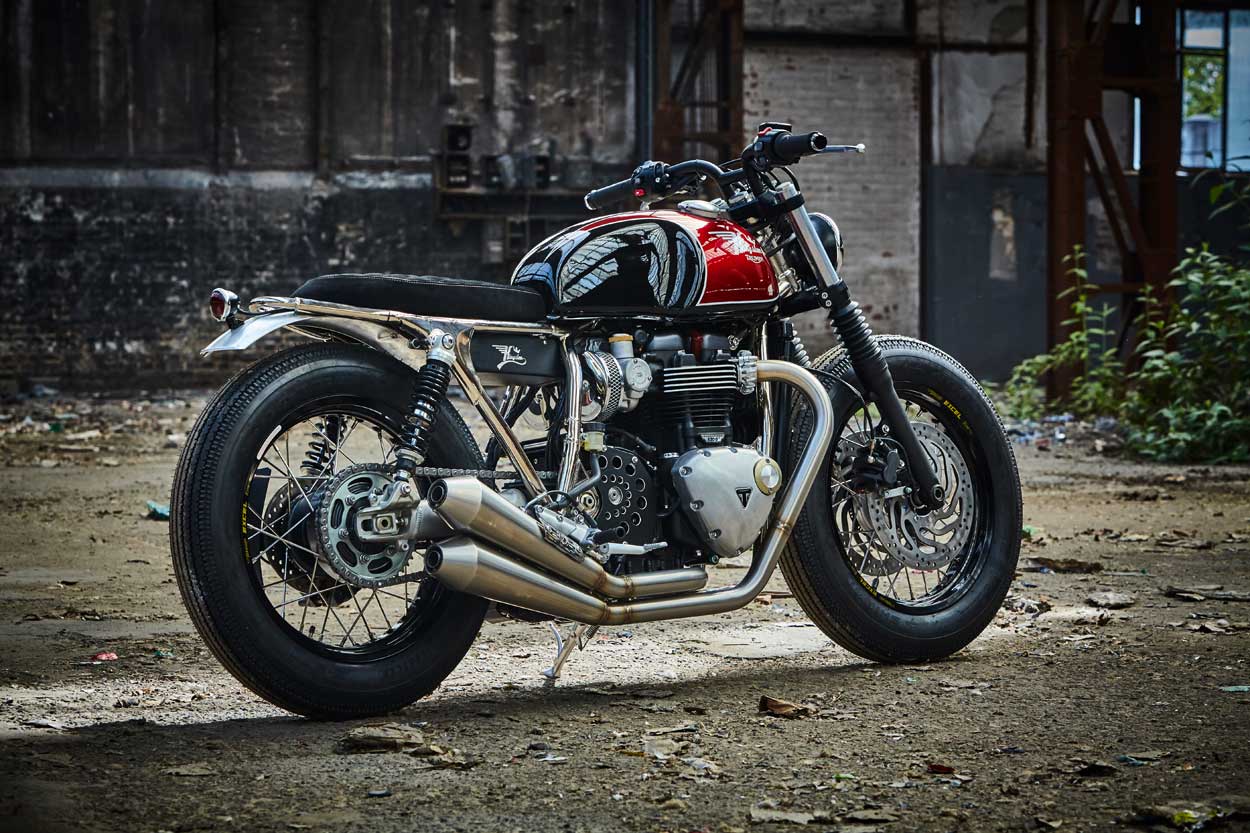 On receiving the Thruxton into the workshop, Dirk stripped the Twin down to the bare frame, cutting off the rear peg mounts and any other unwanted bracketry. The modified frame was then sanded and polished, before being sent away to be nickel-plated to stunning effect. 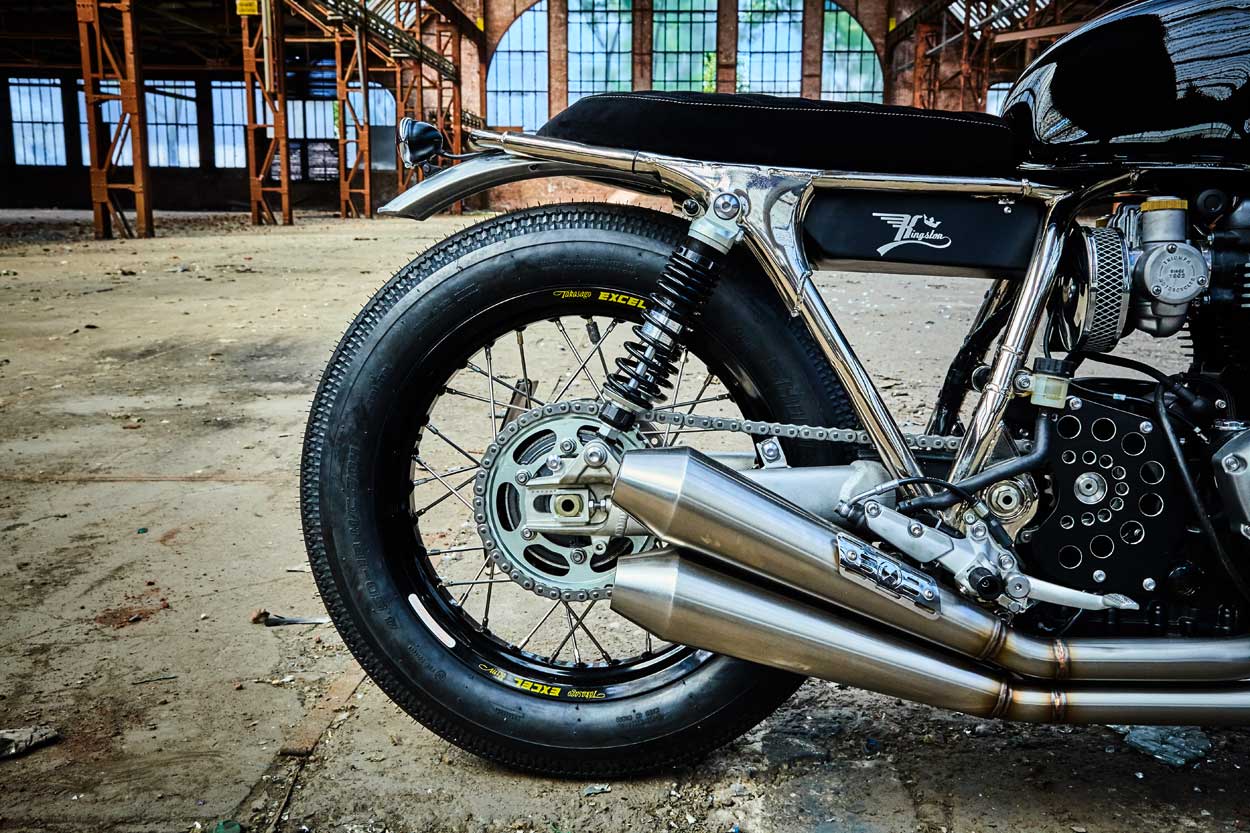 The frame on the Thruxton models is different to the other Classic Twins, a detail which I first noted at last Octobers press launch. Though minor, it is important. 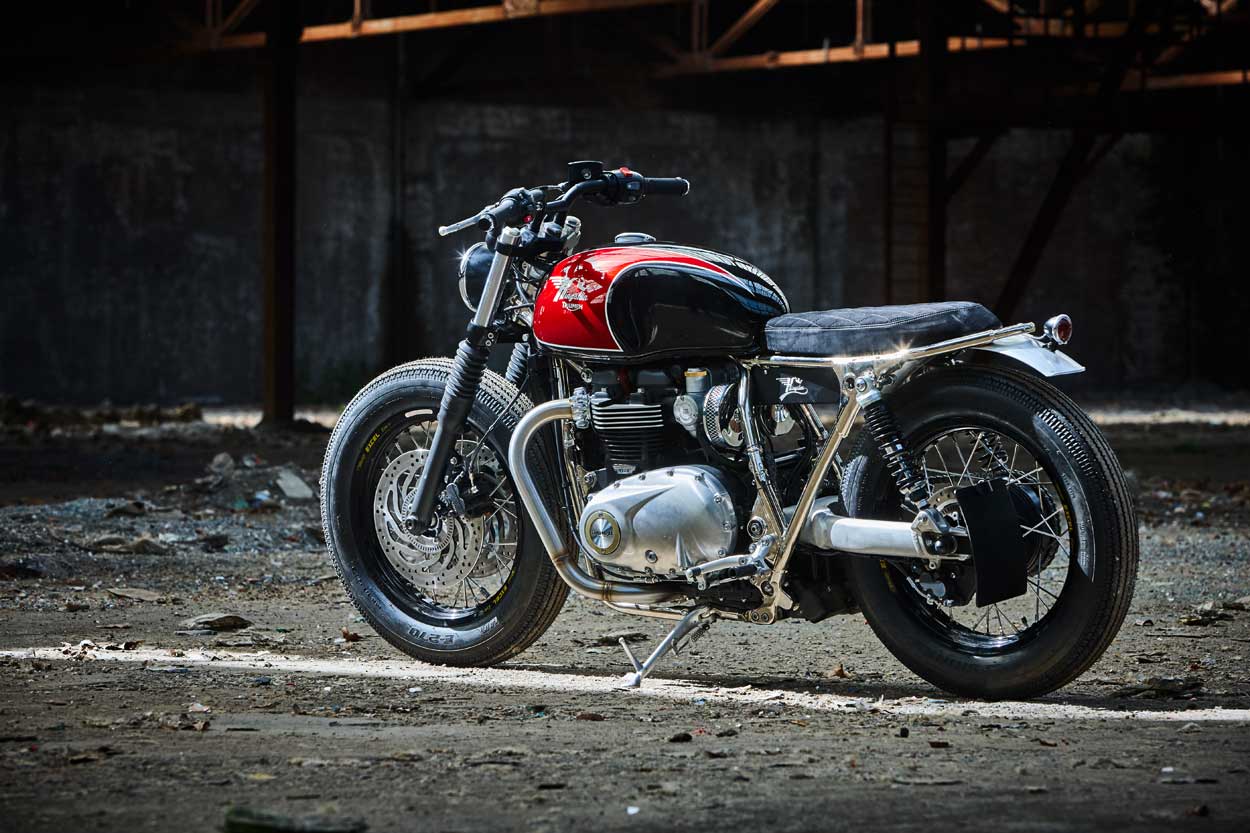 For years custom builders have been trying to make the frame on the Hinckley Triumph Twin more attractive, cutting, shortening and looping with mixed effect. But on the new Thruxton models, its close to perfect out of that crate, even better when nickel plated. 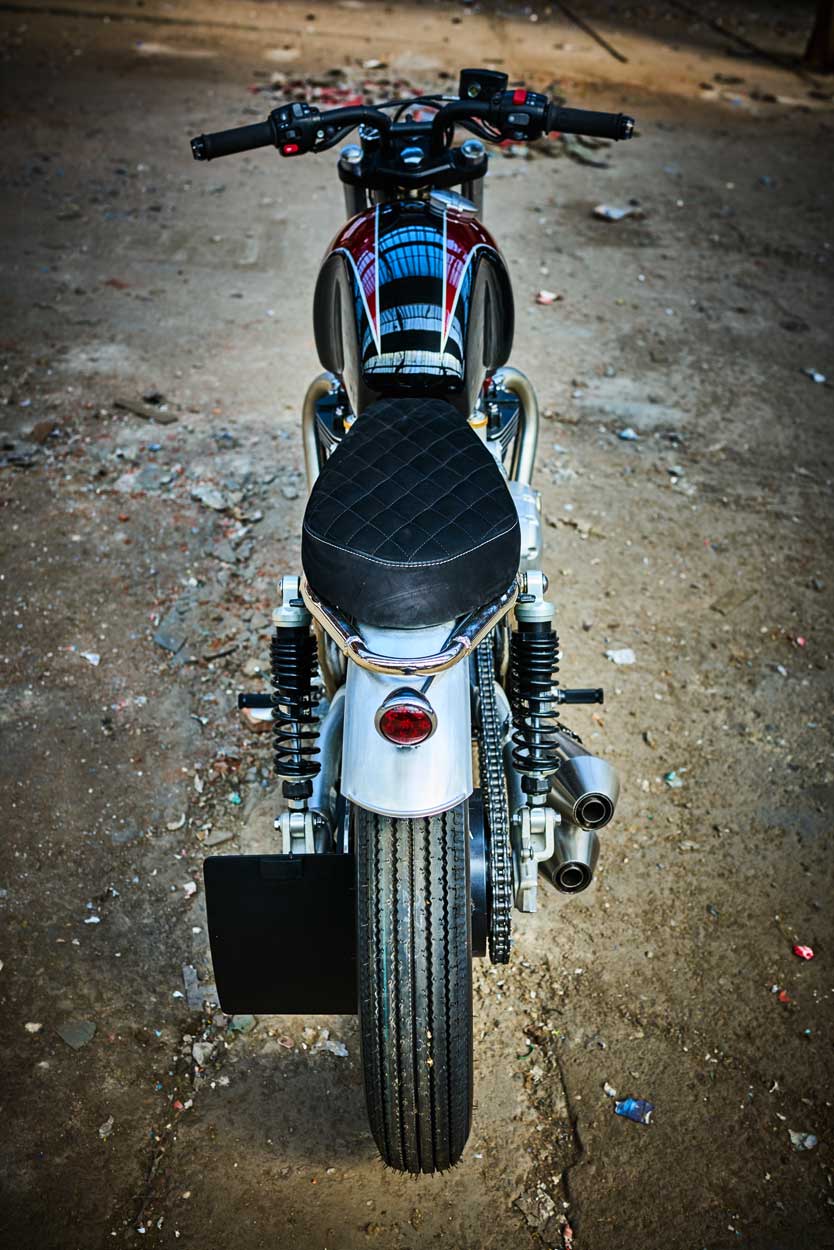 With this in mind, it might be a good idea to start with the Thruxton when building a custom, no cutting or looping required. And if you don’t cut anything off, you could even return the Triumph back to stock – handy when second-hand customs don’t sell well. 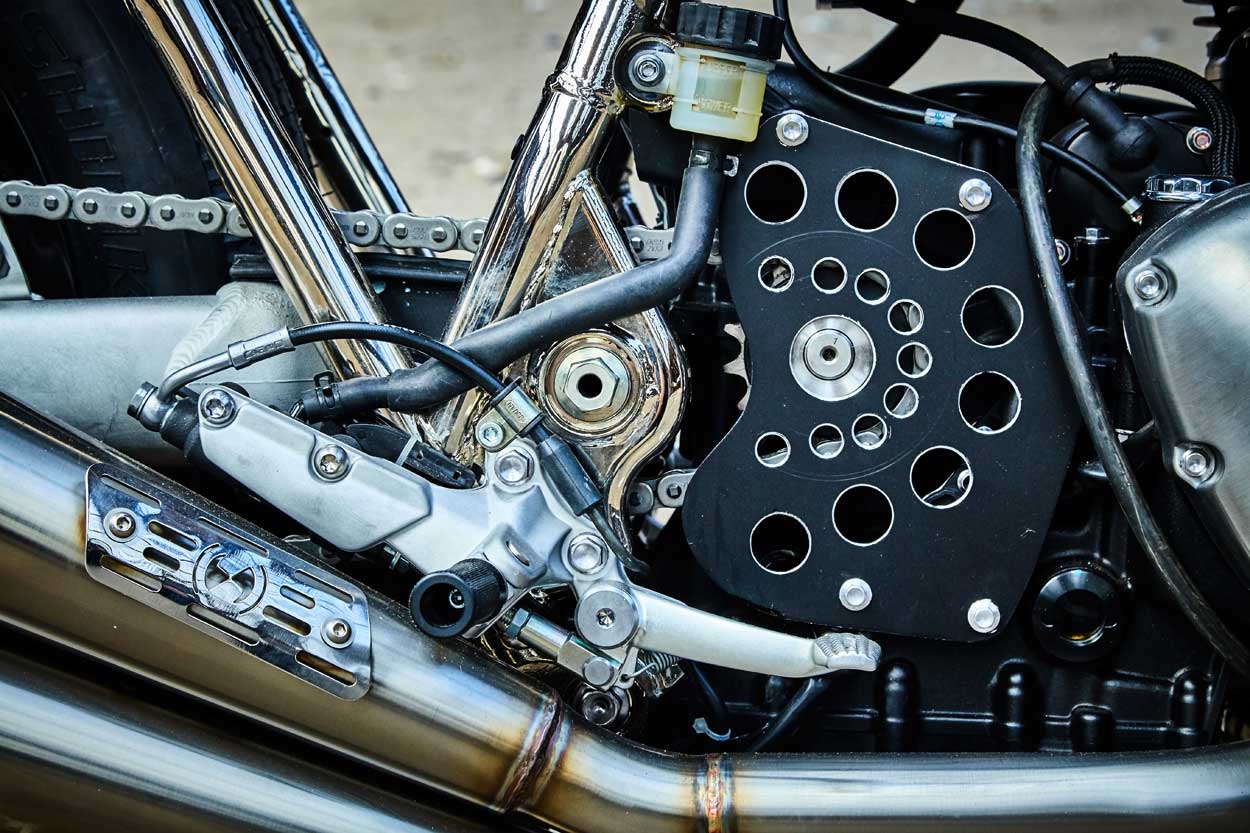 Back in the workshop, the newly nickel-plated frame was reunited with its liquid-cooled 1200cc twin-cylinder engine, now sporting a custom drilled sprocket cover. 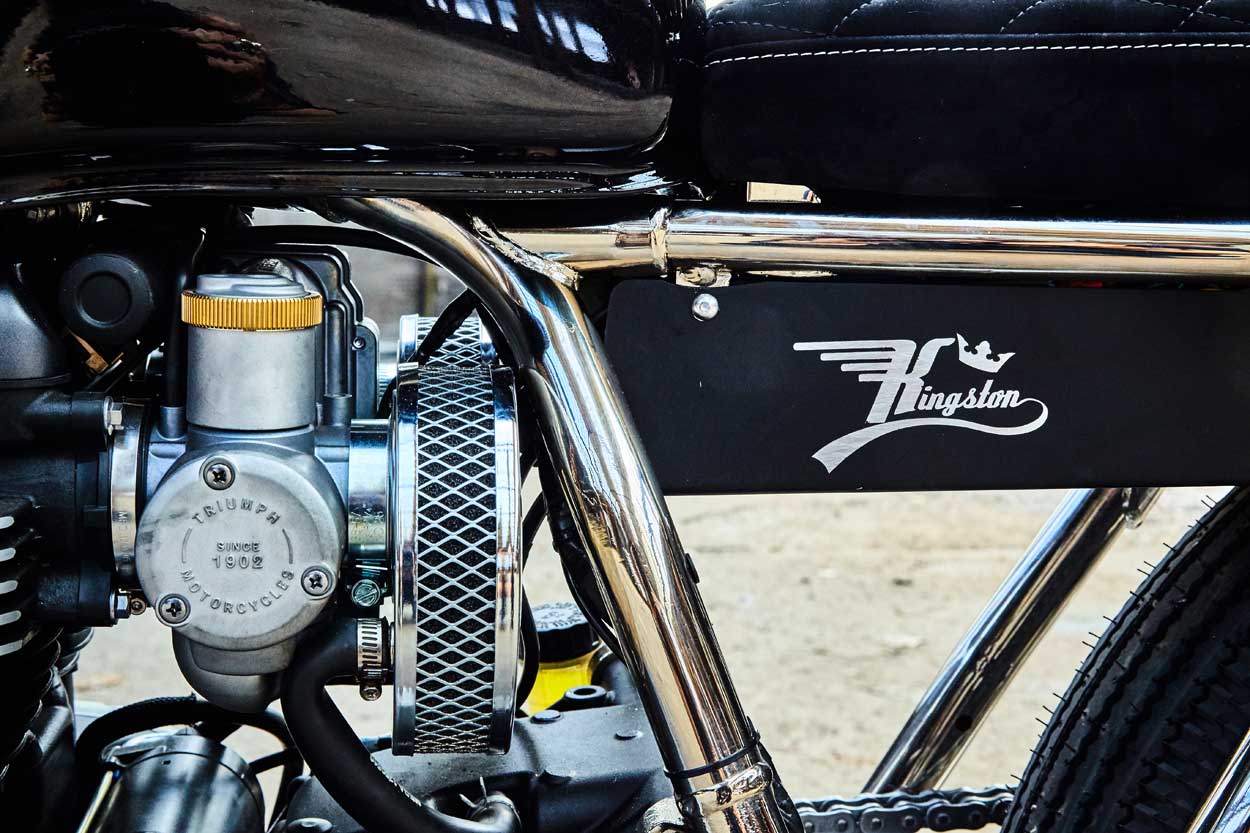 The stock battery/air-box and side covers found the bin, with the battery box being replaced with a custom item fabricated in-house, and now contains the complete electronic system and a compact Shindo Lithium-ion battery. 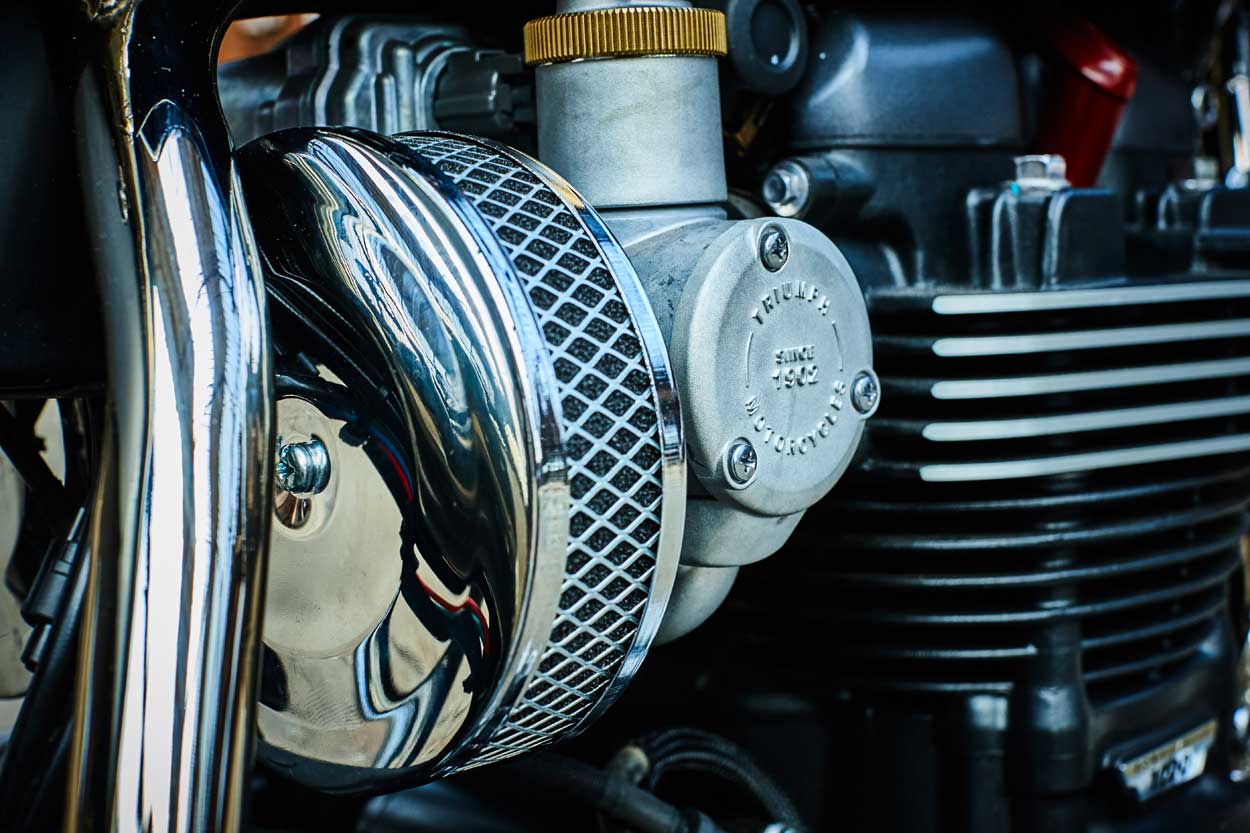 With the loss of that air-box, the fuel Injector units needed air-filters. Dirk chose to fit a set which appear to be straight off a classic SU carburetted Mk. I Mini Cooper… a great choice which adds to the Triumph’s style. 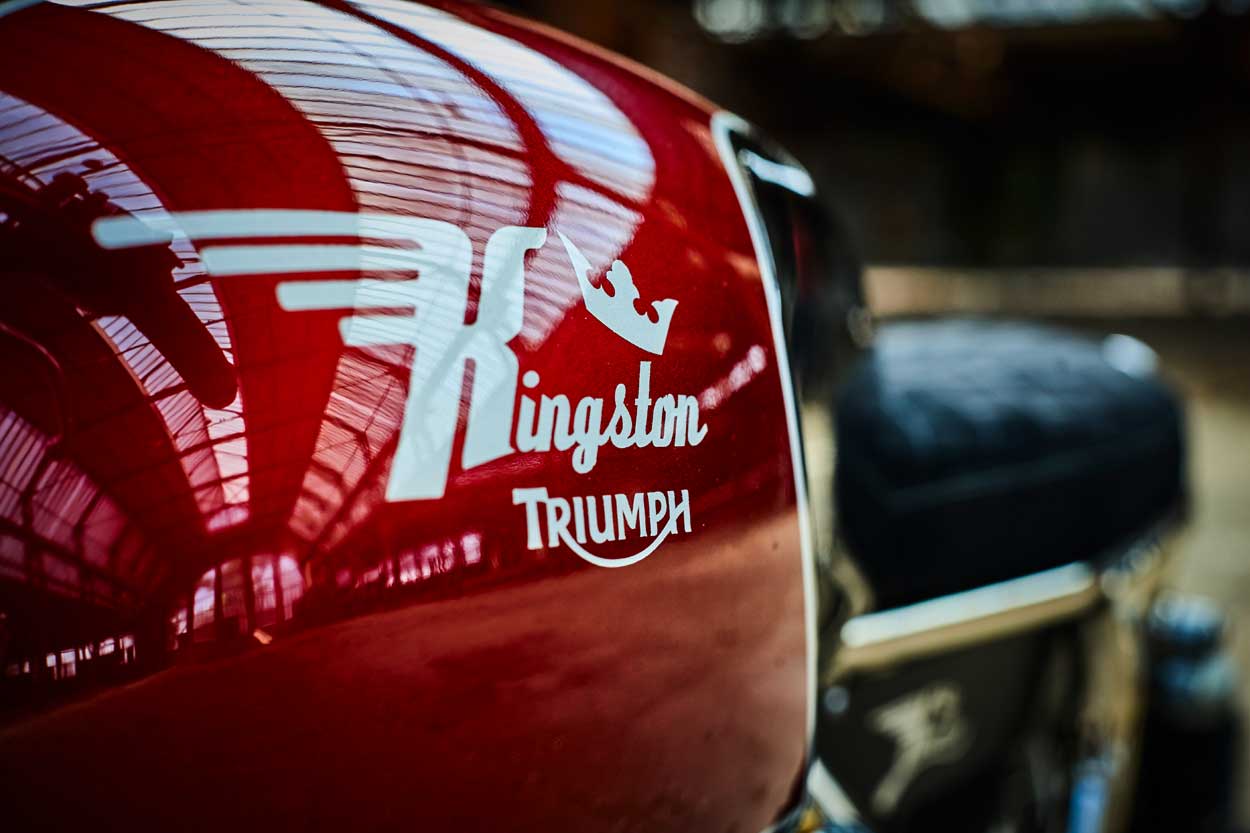 Up top is the beautifully sculpted and proportioned stock Thruxton fuel Tank (another reason why this model is such a great starting place for a custom build) finished in deep red and black, with Kingston Custom Graphics proudly emblazoned on either side. 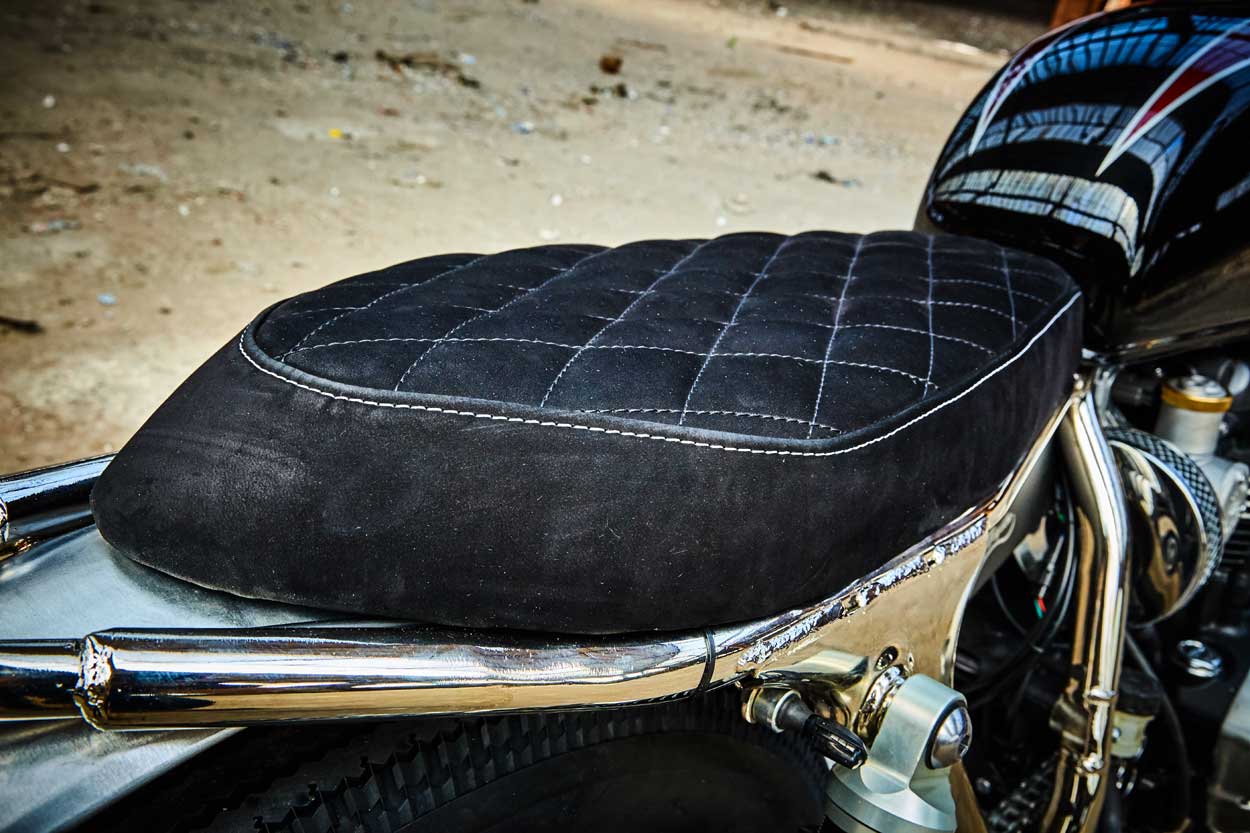 The stock Cafe Racer seat and cowl were no longer in keeping with this Classic Twins new Brat Style, so Dirk fabricated a shorter and narrower base, upholstering it in Alcantara fabric, a seat which fashionably exposes that nickel-plated frame and loop. 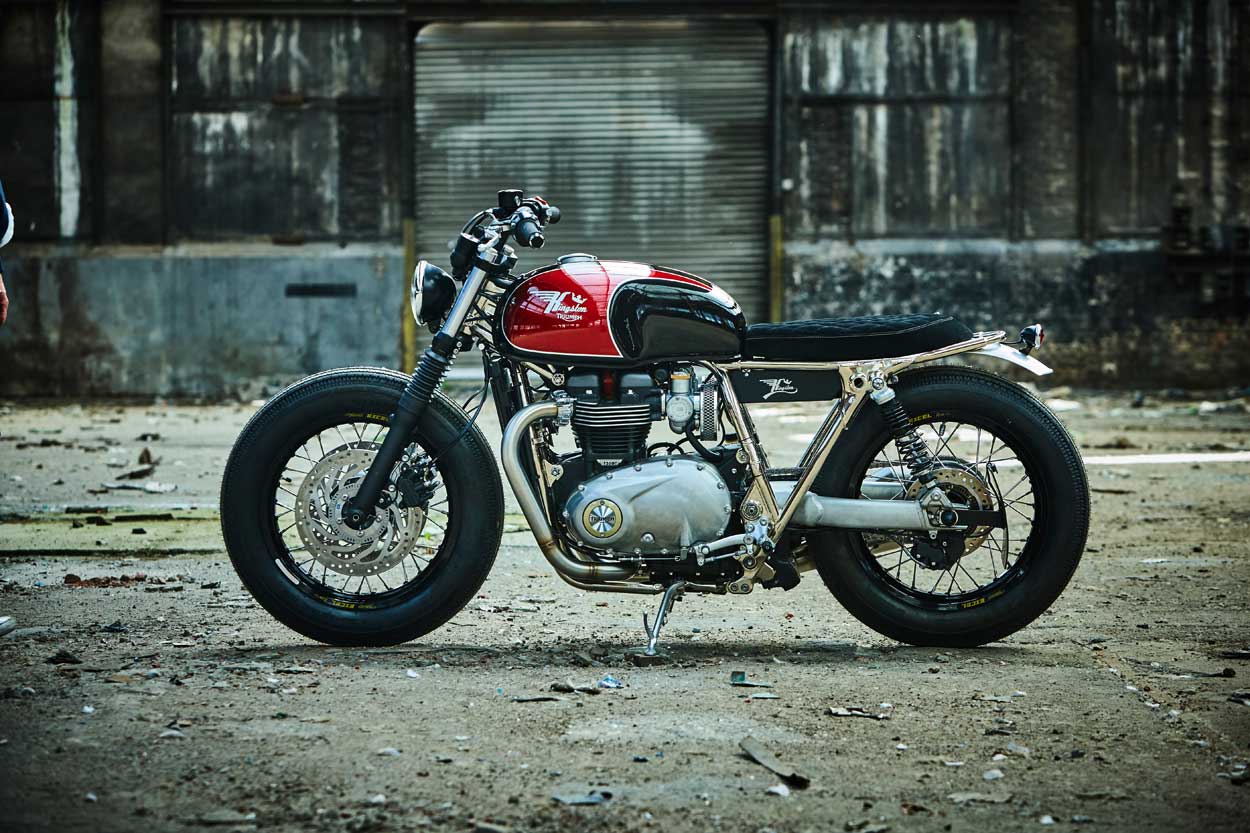 Having ridden the Thruxton for a few thousand miles, I was not keen on its riding position, preferring that of the T120 (numb hands and a bad back don’t make a fun ride). 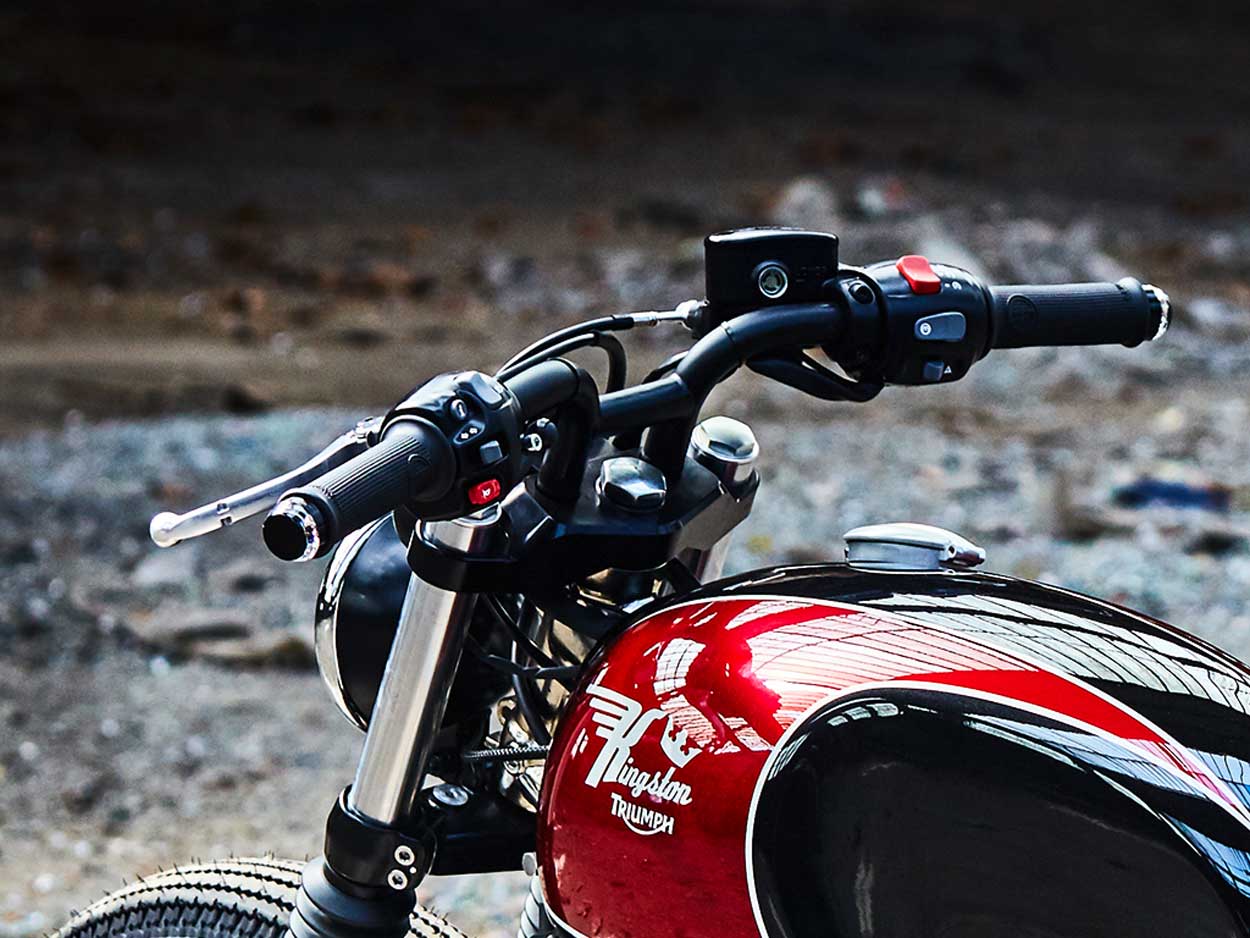 On this build this won’t be an issue, with Dirk fitting a set of custom-made high-rise T-bars bolted straight to the top yoke, these being fitted with LSL grips and a pair of Motogadget Blaze bar end turn-signals. Below, more LSL goodies adorn the stock rear-sets, devils in the detail! 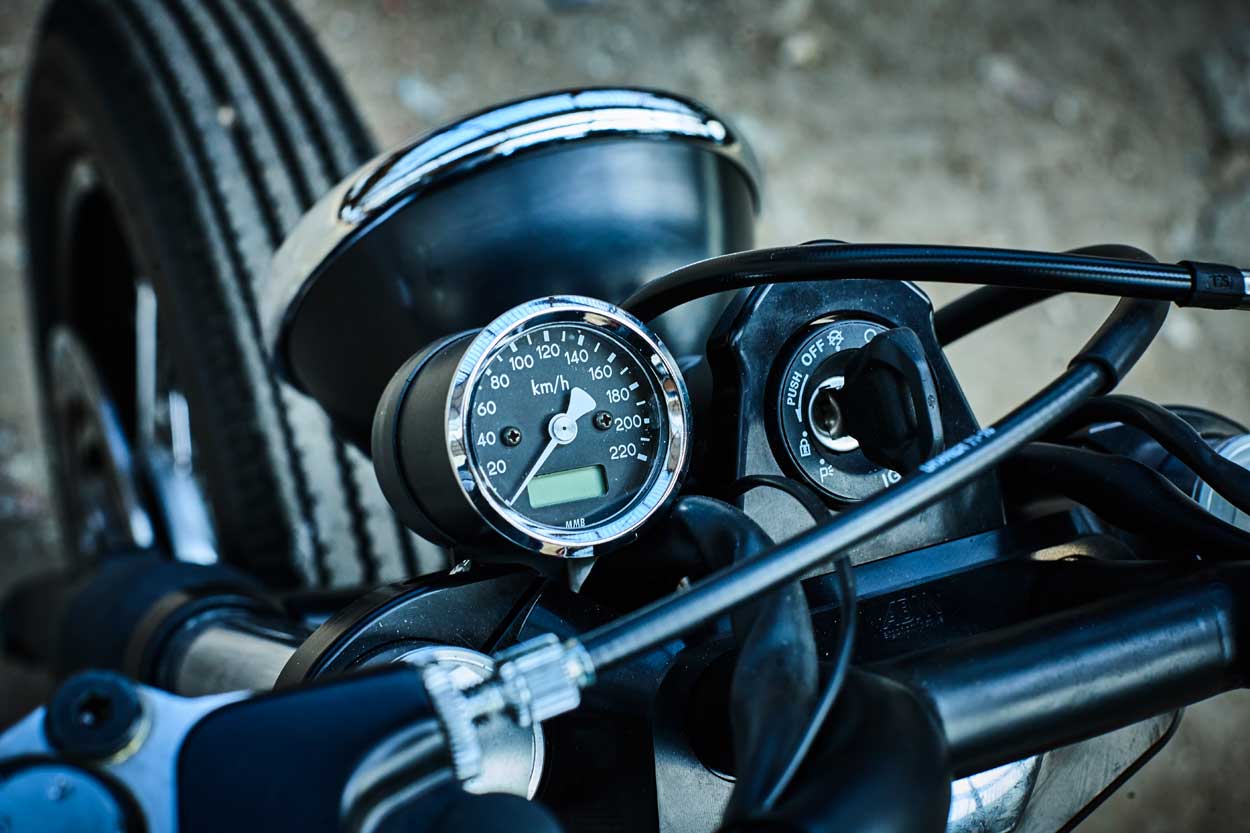 The stock dual (CAN bus requiring) clocks are gone, replaced with a single and less informative mini speedo. This may not be a great idea on these newer machines, as perhaps you will not know what ride mode you are in or even if you are short of fuel, but at least it looks good. The ignition key remains in the same position, but it might have been better relocated now a bottom mounted Bates style headlight has been fitted. But these are minor details on a beautiful build. 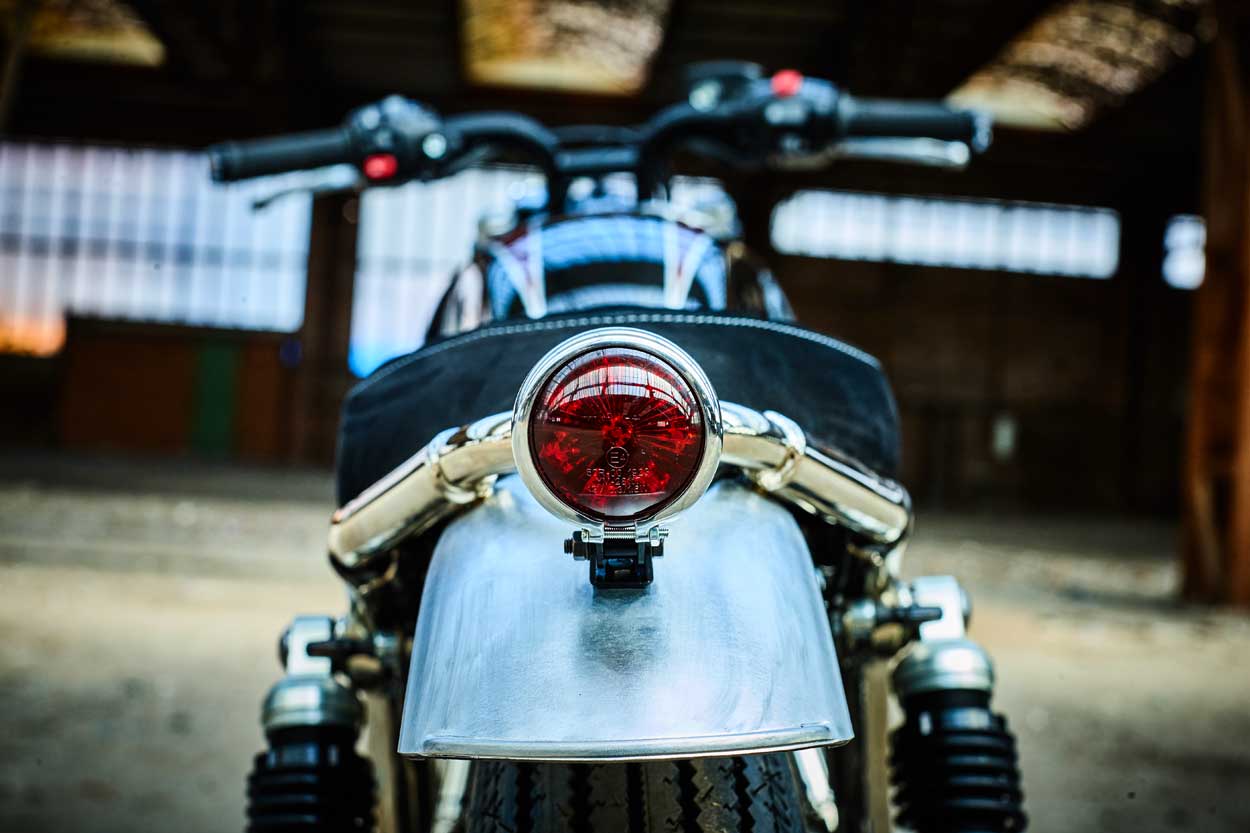 At the rear is a custom aluminium mudguard sporting an ever-popular Bates style L.E.D mini tail/ stop light. A mudguard fortunately kept clean by a side mounted number plate bracket and micro-LED turn-signals, mounted to the inside of the shock mounts using brackets,

This Thruxton now has a much lower and far cooler stance, being fitted with a set of shorter sprung YSS shocks, with the front being modified and dropped through the yokes, slamming this Classic Twin onto a set of black 18″ Excel rims, shod in Shinko 270 Super Classic tyres And yes, I imagine this will make this Thruxton handle like crap and feel like steering a boat…. but shit, it looks awesome! 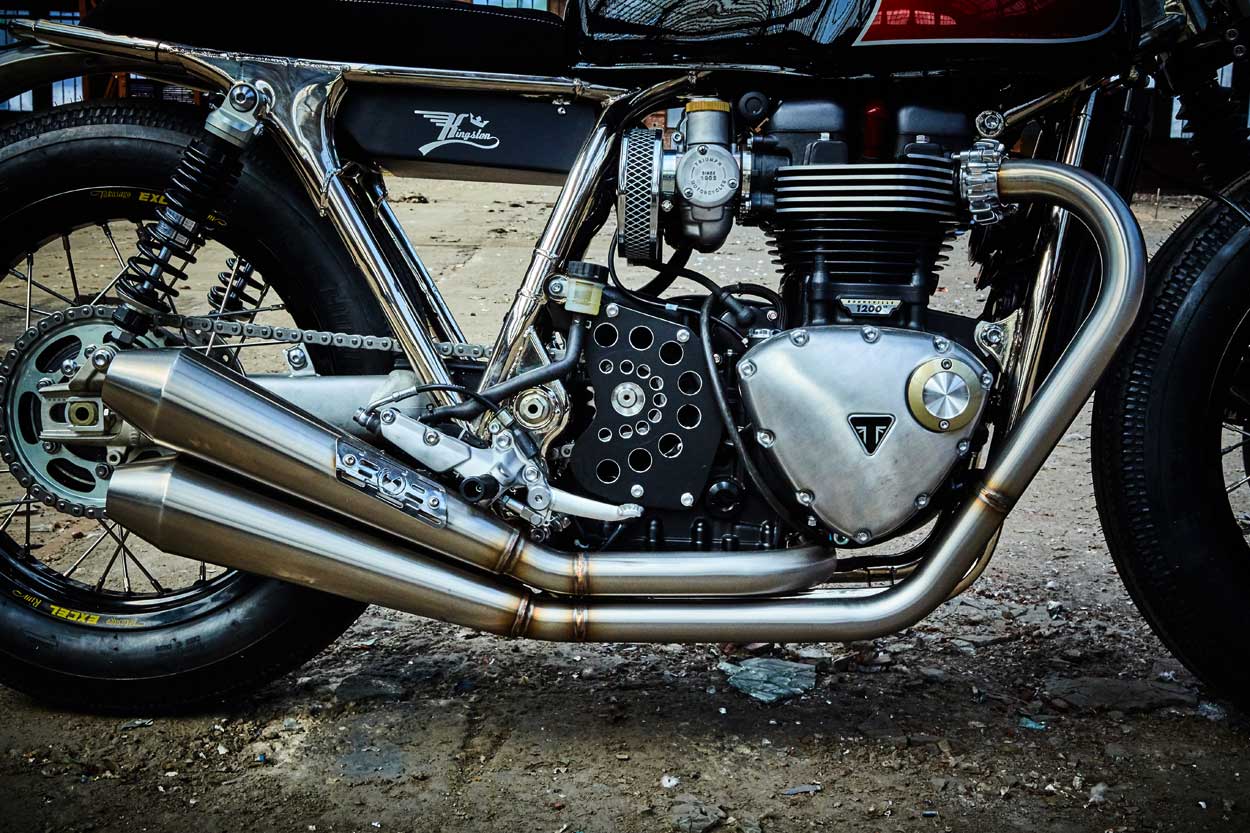 Finishing this superb Thruxton Brat build off, is one of the best looking 2>2 custom exhausts system I have seen, a system designed by Dirk and made by Hattech. As you would expect Dirk needed to expertly remap the Thruxton fuel injection system to get everything running sweetly again, but then, that what he does! 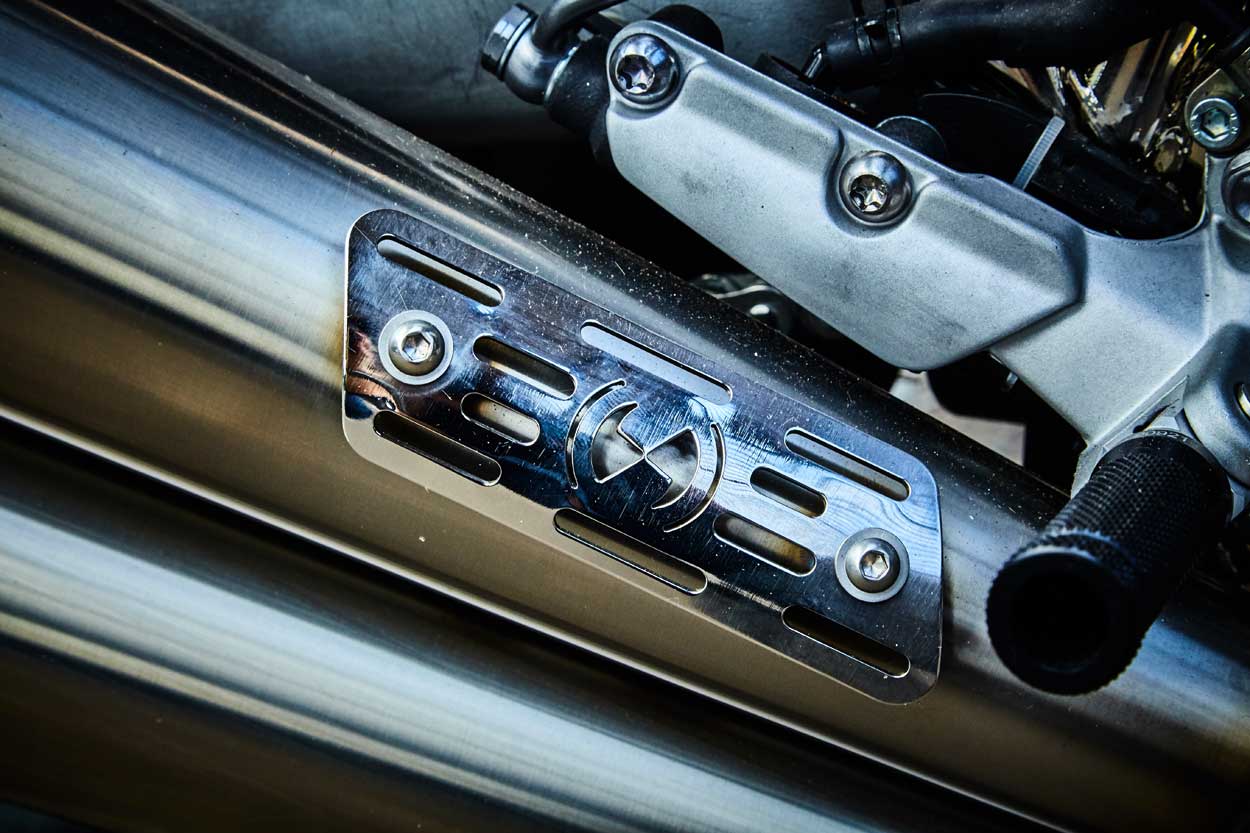 I now want a Thruxton!