I thinks its only right that Bonnefication feature some real Classics and spotting Steven Robson’s Shed Built 1978 Triumph T140v Scrambler a few weeks back, I thought it looked just the sort of bike Bonnefication’ readers would love, It’ wearing knobblies for a start –  We had to let the bike do the rounds on other websites first, as thats the way of thing in the blogging world, where the ‘Exclusive’ is king,  but in the end if you love a Triumph you know where to come (Bonnefication if you were actually wondering). I was going to rewrite Stevens 1652 word, but rather than give you an abridged version in my own rablings, I thought it would be nice to bring you those intresting 1652 words…. 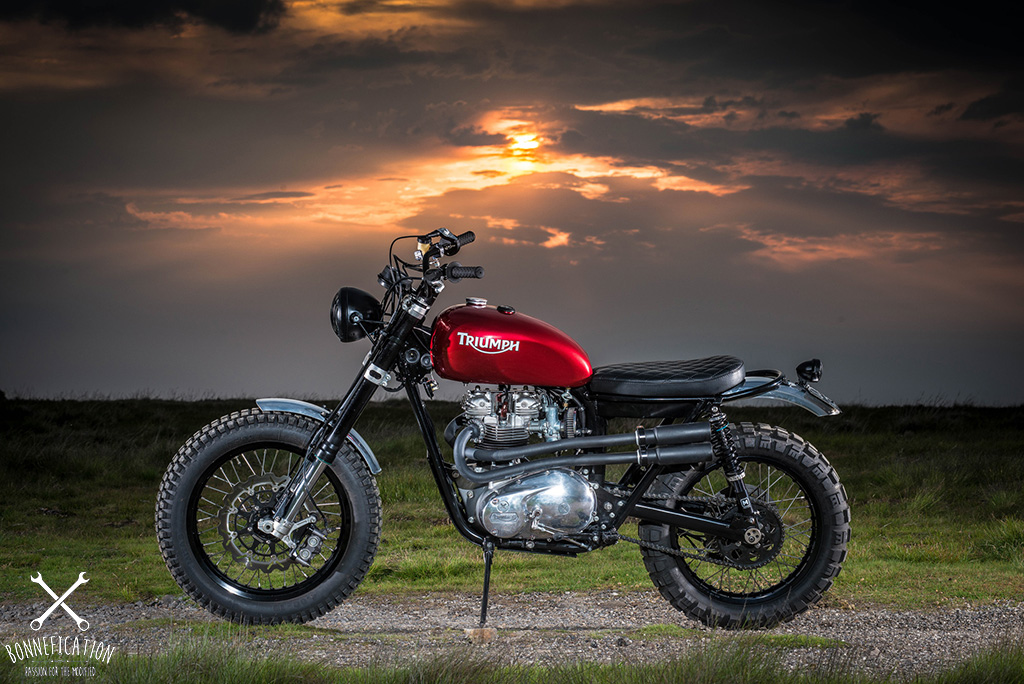 I am self-employed, splitting my time between electrical contracting and running my eBay shop SR Bike Parts; which deals in used parts, so I am a part time bike breaker. My work place is a large shed at the rear of my home, racked out for parts storage, with a workshop area, and office space. In January 2015 I turned 50, it’s not a good month for a party being straight after New Year, so with no actual celebration planned we decided as a family that I should build a classic bike instead as this has been something I had wanted to do for several years.  Previously; I have switched from trail, sports, enduro, supermoto, rally, road and track bikes, riding mainly new or newish bikes. I have never owned a classic British bike and I like garage time, therefore the thought of sorting out and maintaining an old bike appealed. 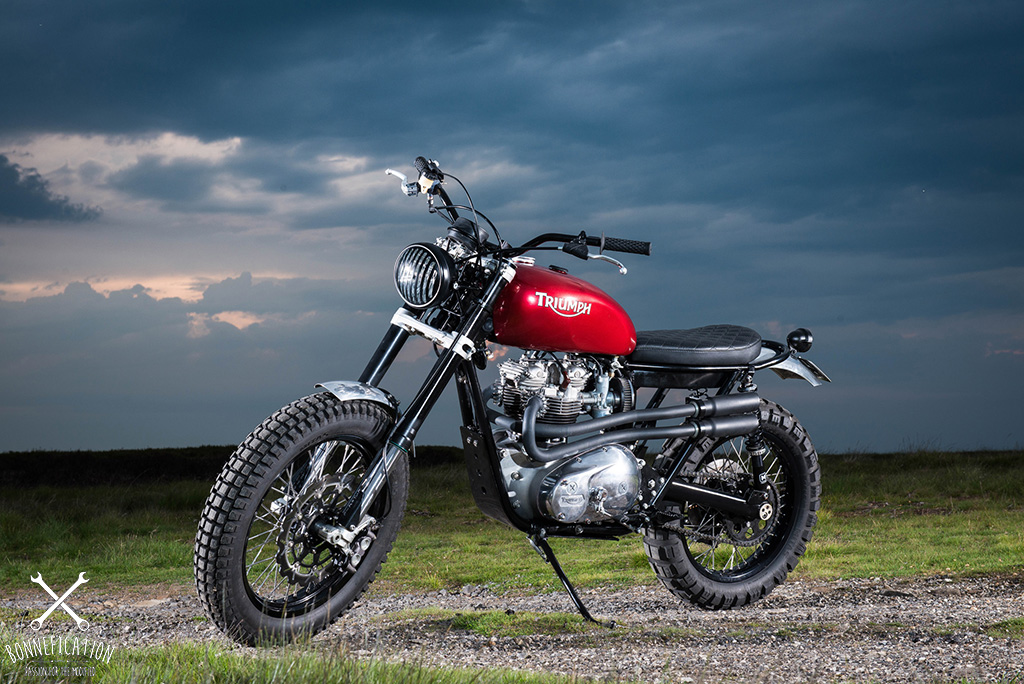 I have a love for big trail bikes and the 1960s -70s American Baja type Desert Racers have always caught my eye. Stripped down, big front wheels, longer forks, they look purposeful, they look good fun. So it was going to be a “big traily”. With Norton’s being priced high, I started looking at Bonneville’s. The problem was they were going up in price too! – Fortunately; eBay came up with a donor, the 1978 T140V, a full bike that had stood in a garage since 1998. I bought it, then for good measure bought a lathe, pillar drill, grinding discs, Mig wire, AF spanners, UNF bolts and started the planning. 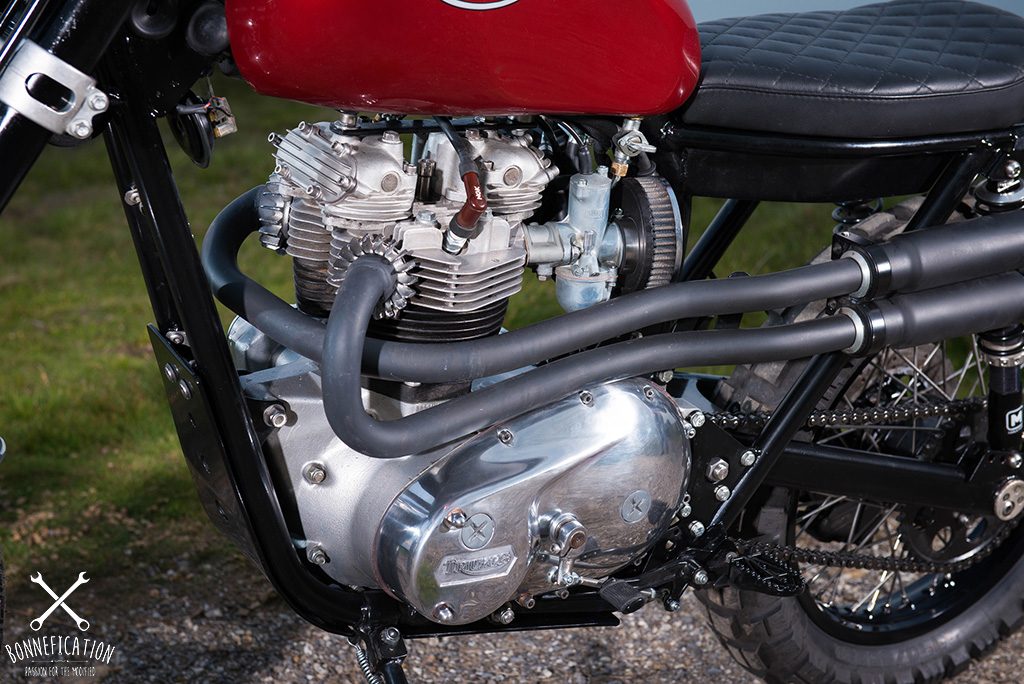 The bike was then stripped down and all the parts not required were sold, leaving mainly the frame and engine. My aim was to end up with a stripped back, minimal looking bike, but a bike that would ride right, so I decided upon modern running gear, wiring and riding position. I had a set of 45mm Marzocchi forks and yokes from an Aprilia RXV enduro bike that I had recently broke, unfortunately the front wheel was long gone. Larger bearing cups were made and welded to the head stock to incorporate the larger yokes. The forks had their travel reduced to 910mm to match the Cerianis used back in the day, and Talon provided the 19”front wheel, their hub, excel rim and stainless spokes. 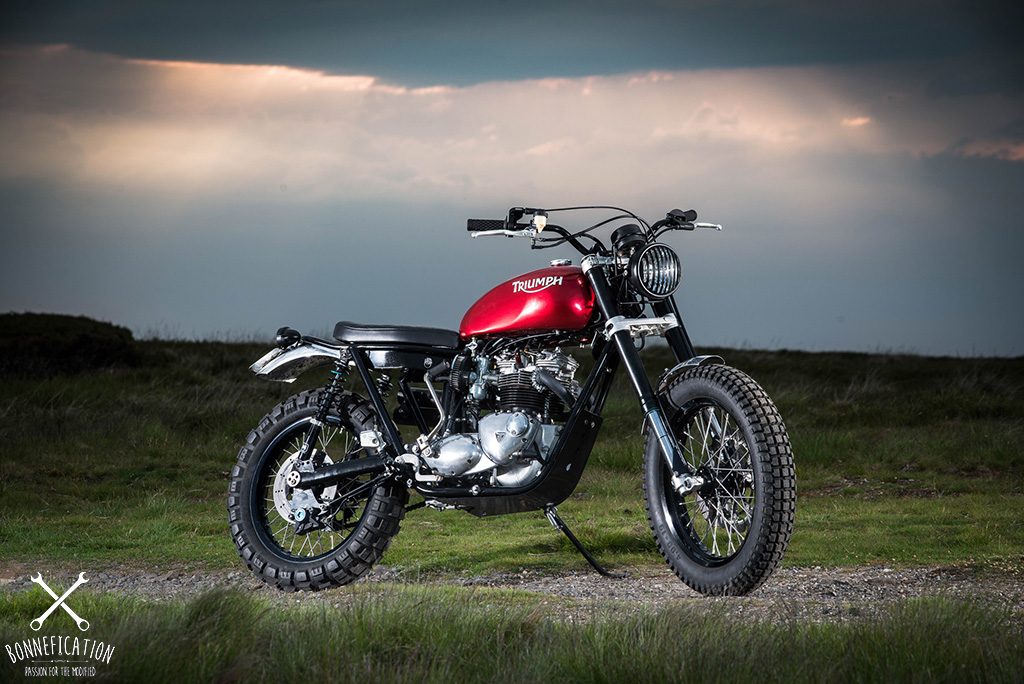 The front tyre is a Mitas trials rear, road legal fitted front or rear. The front brake is a Magura 4 pot radial calliper with mount, and radial master cylinder, goodridge hose made to suit. The rear has a longer swingarm with eccentric adjusters, Storik provided this,( google them ;-). I wanted a longer swing arm and bigger shocks, and the laid down shock position like the old XL250s. Maxton provided the shocks, made especially for this bike. The rear wheel has the standard T140 hub, powder coated and a Morad 18” rim. Excel didn’t do a rim to match the rear hub and Morad similarly didn’t do a rim to match the Aprilia type front hub. Both rims were freshly anodised so they match. The rear tyre is Mitas adventure tyre, the rear brake is from an R1, stock part. The Calliper hanger and torsion arm are shed built, as were the mounts for the KTM/Brembo master cylinder. So that sorted the running gear. 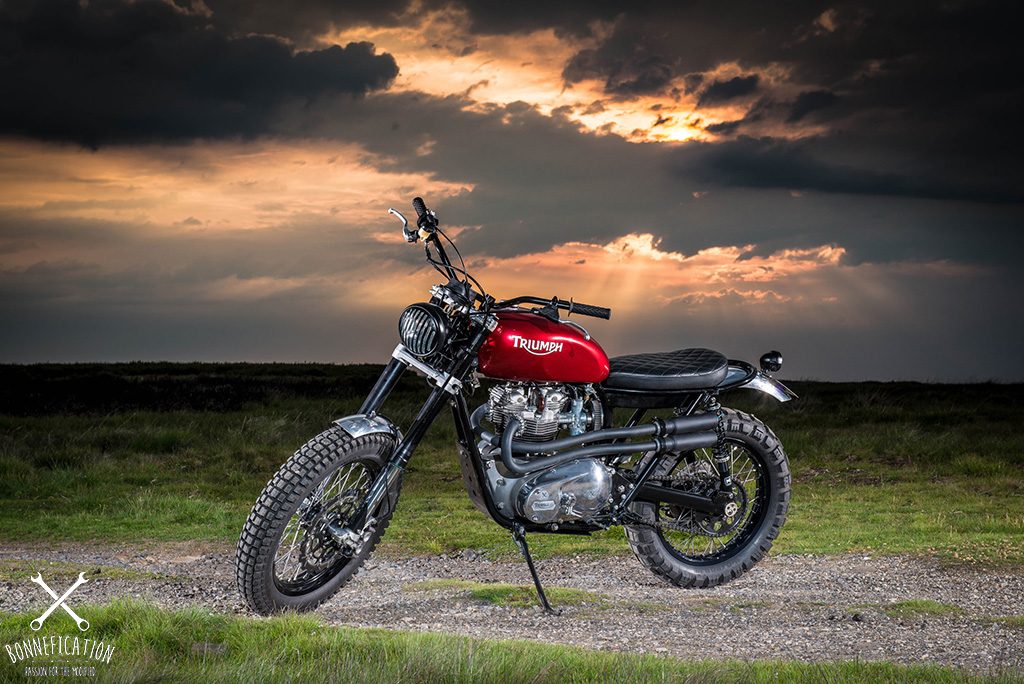 Initially the rear shocks were too hard; the springs have been swapped for lighter ones, now they are plush. The front fork legs were anodised and fitted with SKF seals, but they leaked, the fork springs being shorter made them harder, too hard. Reverting to genuine Aprilia seals sorted the leaks and lighter fork oil helped soften the action, although the shim stack may yet be altered to make them softer still as I get more used to the bike. Ok, so I was happy so far with the stance of the bike, next was the tank and seat. I bought a new “made in India” tank from eBay and sent it off for paint. I received a phone call from the painter who explained that under the wax finish it was too rough to paint and would take a day and a half to prepare. This was a tank advertised as ready to paint, lesson learned! Another tank was sourced, it was new and made in England it was painted, but now has a very slight leaky seam, a problem to overcome. 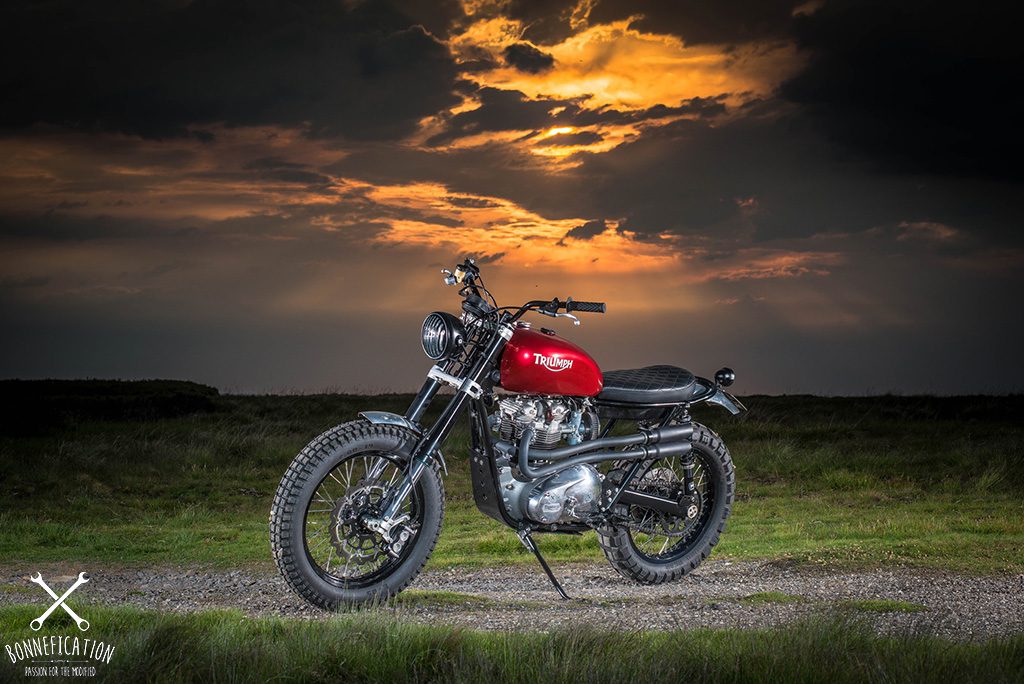 The seat pan was made in sheet steel in the shed, and then sent to be covered locally at Saddle Craft; they also did the powder coating of the frame and 23 associated parts. The Battery tray, front mudguard bracket and headlight mount were all shed built; both brackets took at least 5 attempts before I was happy. The original bike had a feet forward riding position; weird! The pegs have been moved to the under arse correct modern position, the gear lever and back brake have also had been moved back. 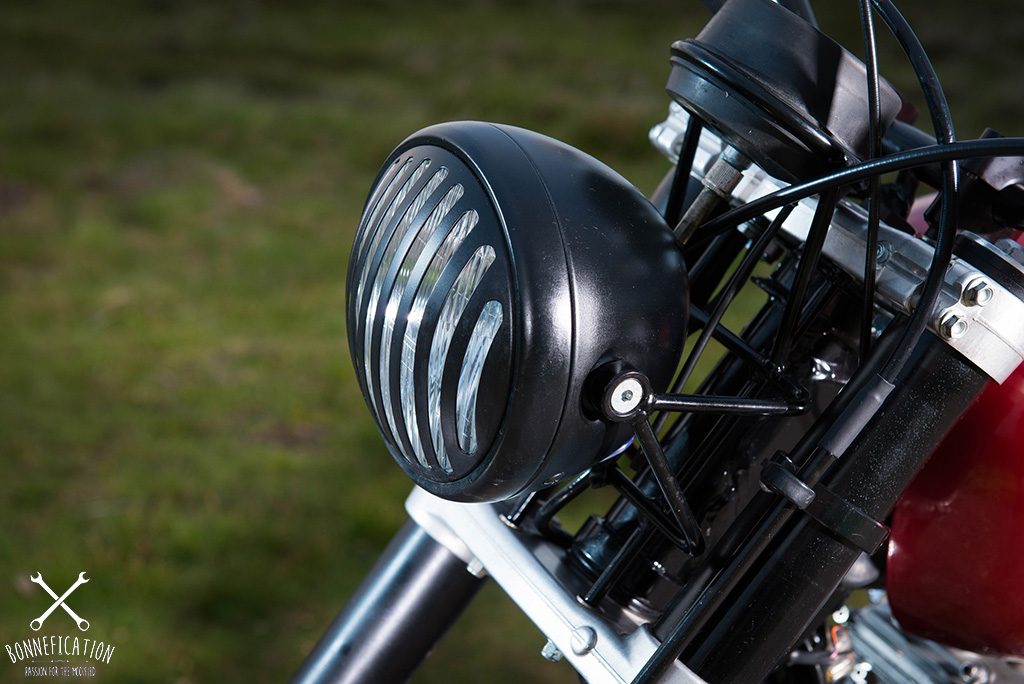 The riding position now matches the ergonomics of the KTM 990 Adventure, so it feels right, well right to me. I decided on using the original cable drive speedo as previous builds with electronic speedos which look good but are hard to read in sunlight. The ring speedo mount was shaped using a handy fire extinguisher, quite happy that’s the only use the extinguisher has ever had. The Wiring took hours in the shed. I bought a load of cable in the correct colours and pieced it all together. The loom was covered in braided heat shrink for the dated look. The loom and oil pipes are attached to the frame with P-clips and welded on round nuts, nearly 50 of them. 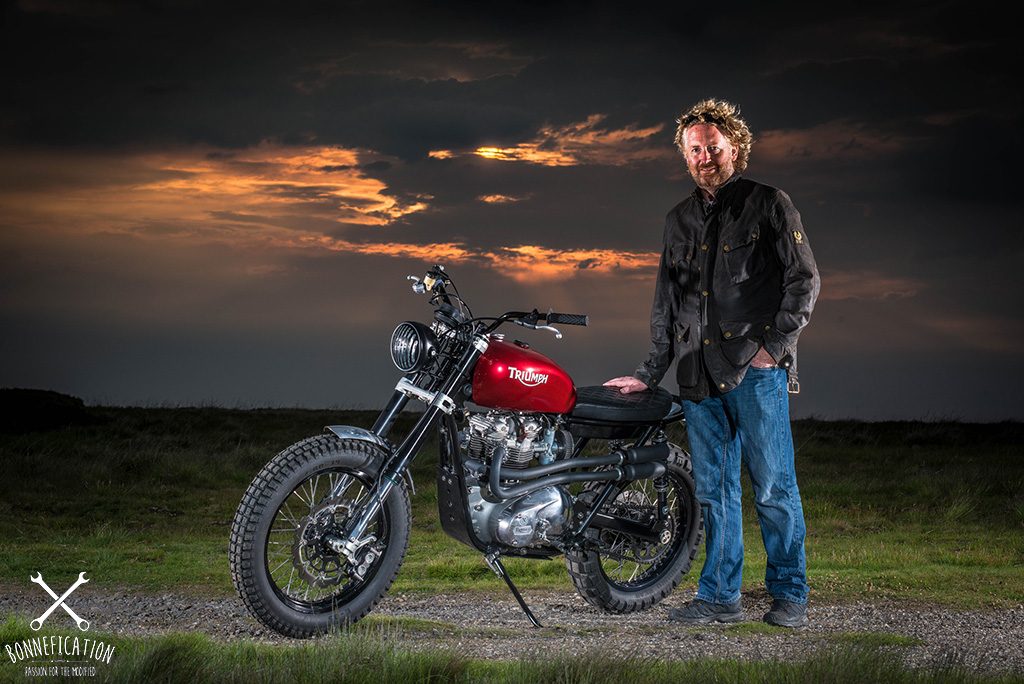 I didn’t want to use any cable ties, but in the end I had to relent, two ties are on this bike. The light, horn, and kill switches are miniature and wired through the LSR Flat track bars. A handy tip for threading the wires in is to first suck through a draw string using a vacuum cleaner, (shed tricks.) I didn’t want lights that glow and dim as the revs change, so I used a 3 phase stator, rotor and regulator rectifier, the battery is a small light weight lithium one. 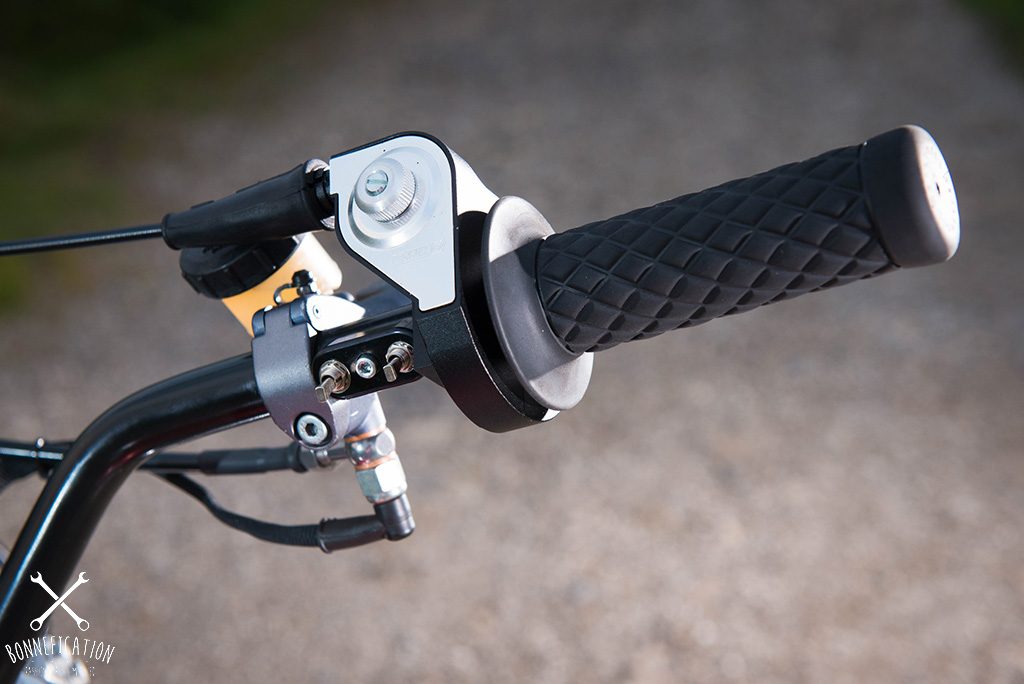 An Electronic ignition replaced the points and condenser setup and a twin output coil was mounted under the tank, on the previously mentioned handy welded round nuts. The exhausts are high level standard T120 front pipes to Biltwell Canon end cans, I altered the spacers. They were then ceramic coated as I didn’t want chrome. The T140 head had to have spigots threaded to suit the T120 headers; this was done by Sky Classic Bikes as well as fitting valve seats, valves and springs. Ged at SCB also supplied most of the engine parts and a lot of advice. Next the engine, I hoped just to rebore and fit new pistons, the main bearings and oil pump. But things went out of hand when I took the rotor off the crank to reveal damage to the key way. The crank went off to SRM for refurbishment and came back dynamically balanced with new con rods. 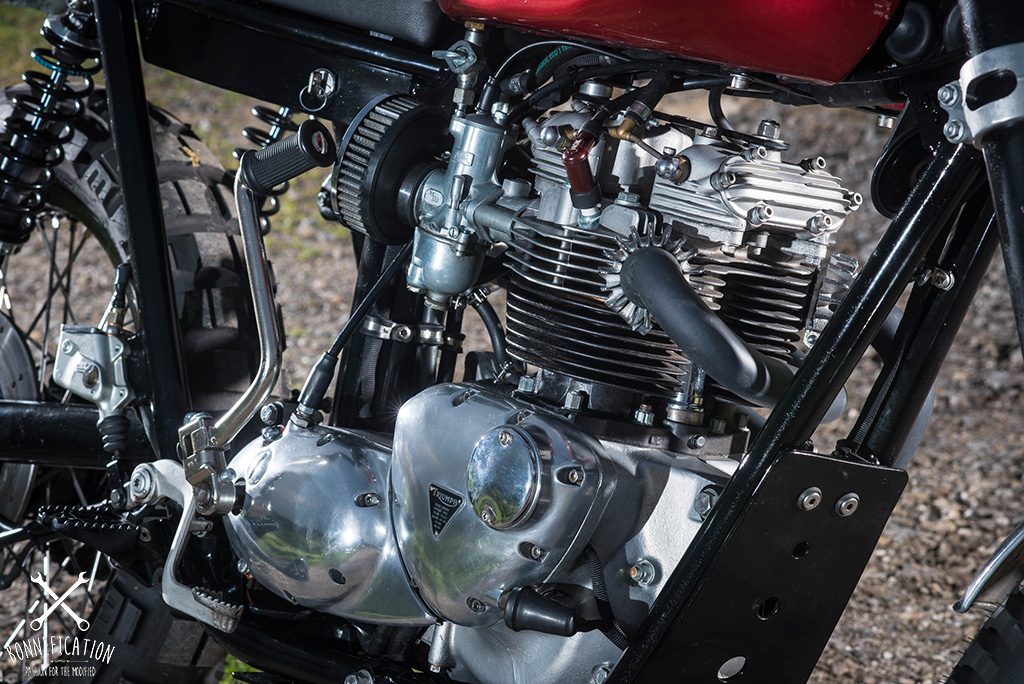 The Crank cases were vapour blasted, the new bearings, bushes and seals were fitted here in the shed. The hours were racking up! As the motor was stripped right down I decided to replace the cams for the better T120 profile ones to improve midrange torque. In the end most engine internal parts have been renewed, including the primary drive and clutch which is now a belt drive unit from Tony Haywood. After days and hours in the shed, ( I was getting support from the family, sure my wife never said, “why you don’t just move in that shed and the kids have forgotten what you look like”). With the bike assembled for the last time, (It must have been built half a dozen times before the final welds then paint and powder coat), it was time to start it. 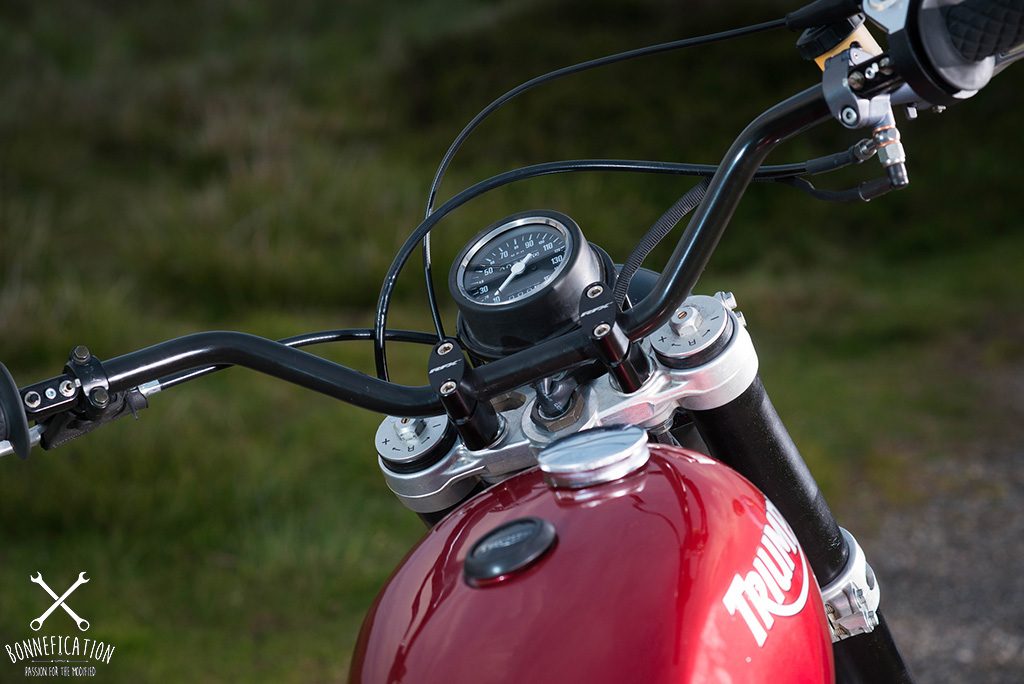 I primed the oil pump by kicking it over a few times, then kicked to start, it nearly fired second kick. With a bit of throttle it was away, smooth as anything, maybe slightly too loud, but running, happy days! The carbs were new Wassel (Amal copies) and the mixture would not adjust correctly on one side, but the bike ran. On the First road run after the MOT, it went well until one cylinder went off. Back to the shed! I then stripped the new carbs, the main jet on one had unscrewed; the other was full of some paste, although the fuel filter was clean. 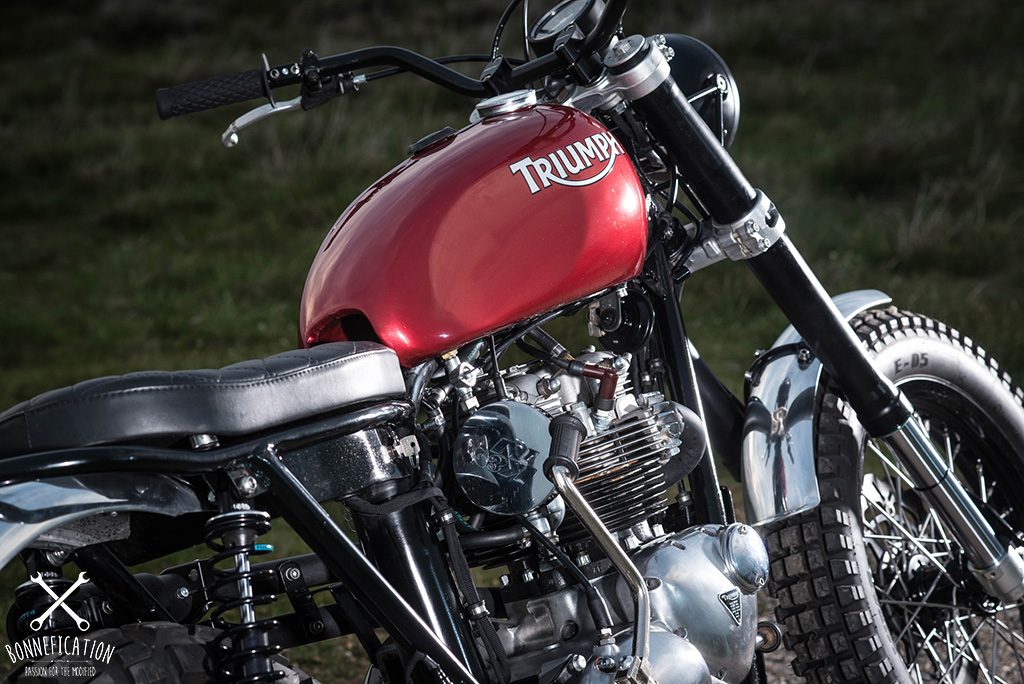 Out again, the same thing happened, too rich one side, then running on one cylinder. I swapped the carbs for some Amal ones, it was instantly better, the air mixture screws adjusting perfectly, and the bike runs perfectly. What I have learned on this build is that although parts are for sale as British made to original spec, this is often not the case, I wasted hours on the Wassel carbs and also the clutch hub,( assemble, check, reassemble, no good, on and on). Only to replace the parts with correct ones then fit them once, and that was it. I finally got some photographs of the bike while it is still new; the thanks go to Critical Tortoise Photography for those.

As I’m writing this the bike has been completed three weeks, and only covered 700miles. Still early days, the bike will be entered in a couple of shows, after that the tyres will probably be changed to either Michelin Sirac or Metzeler Karoo as this bike will mainly be ridden on the road. It’s old enough and doesn’t need to be trailed and aged in dog years.