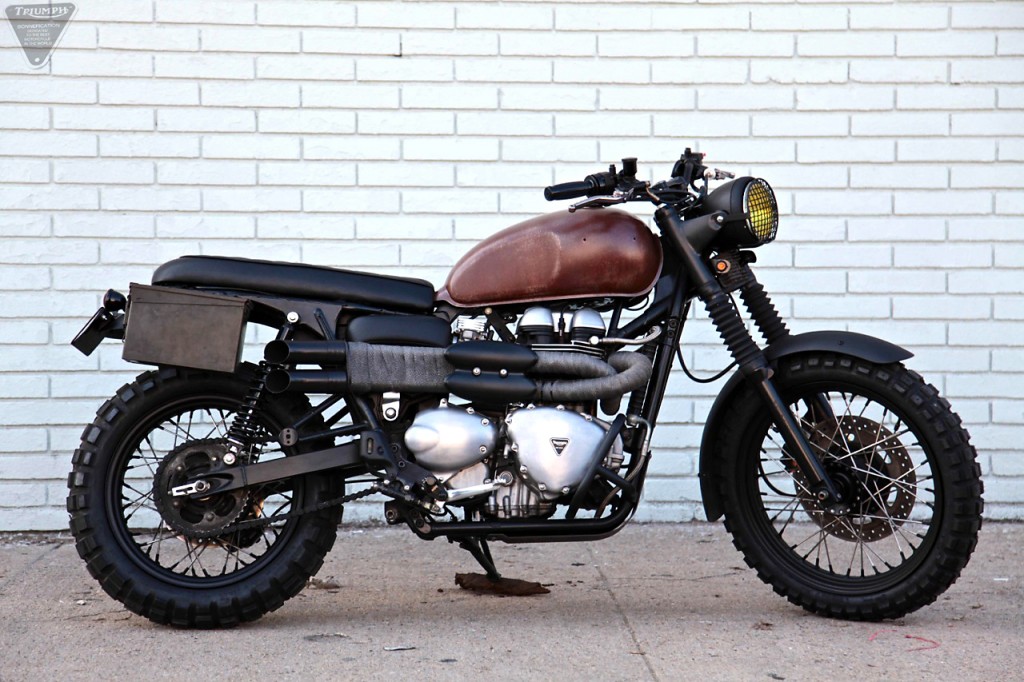 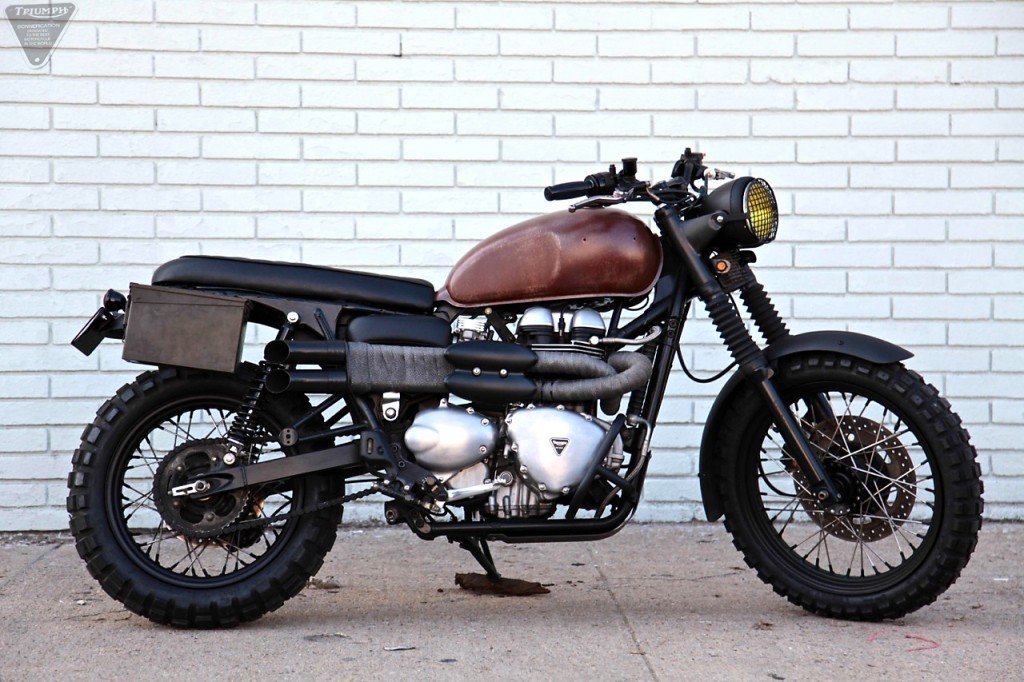 Derick of VDBMoto grew up in the beautiful sun kissed hills of Tuscany, home to the Renaissance and home to his passion for motorcycles. When Derick was eight, it was his ‘mom‘ who introduced him to two wheels, by buying a Yamaha YZ80. Since then Derick hasn’t looked back and stayed with dirt bikes into his teens and even when he was legally allowed to ride on the road, he stuck with his Honda XR600R. 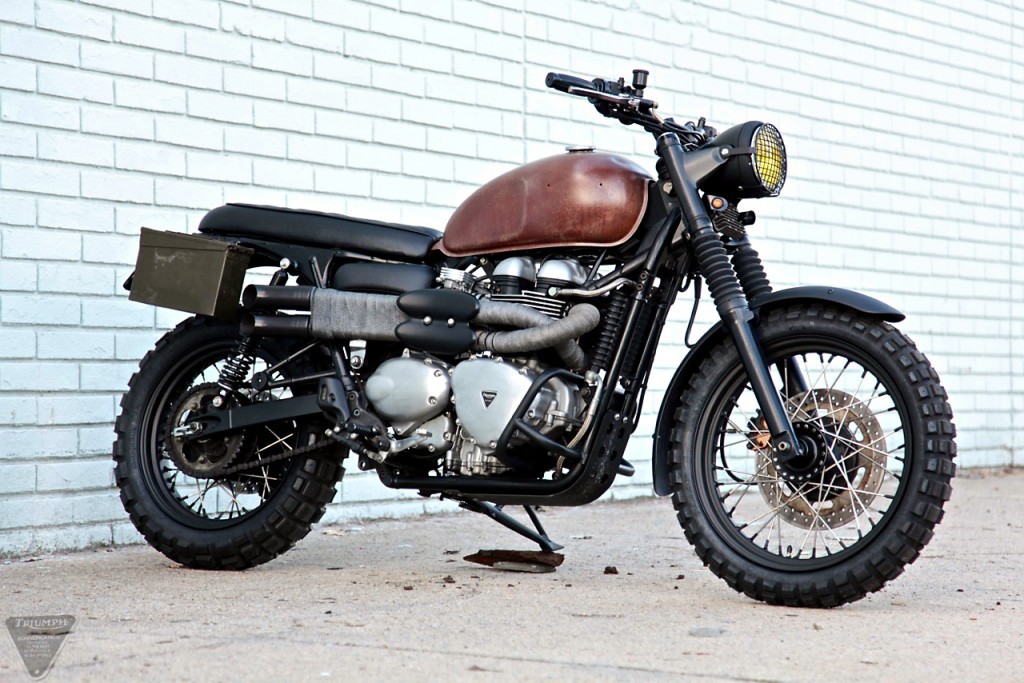 Derick left Italy ten years ago, travelling the world taking pictures. In his time away, and not being in the same place for more than a few months, Derick didn’t get the chance to own a motorcycle. Like so many, life led Derick to the U.S and New York City,  once settled, Derick finally had the chance to get himself a driving licence and once again he was back on two knobbly wheels….

“The Scrambler just made sense as the streets in NYC are an absolute mess and needed something that was functional but at the same time aesthetically pleasing.” 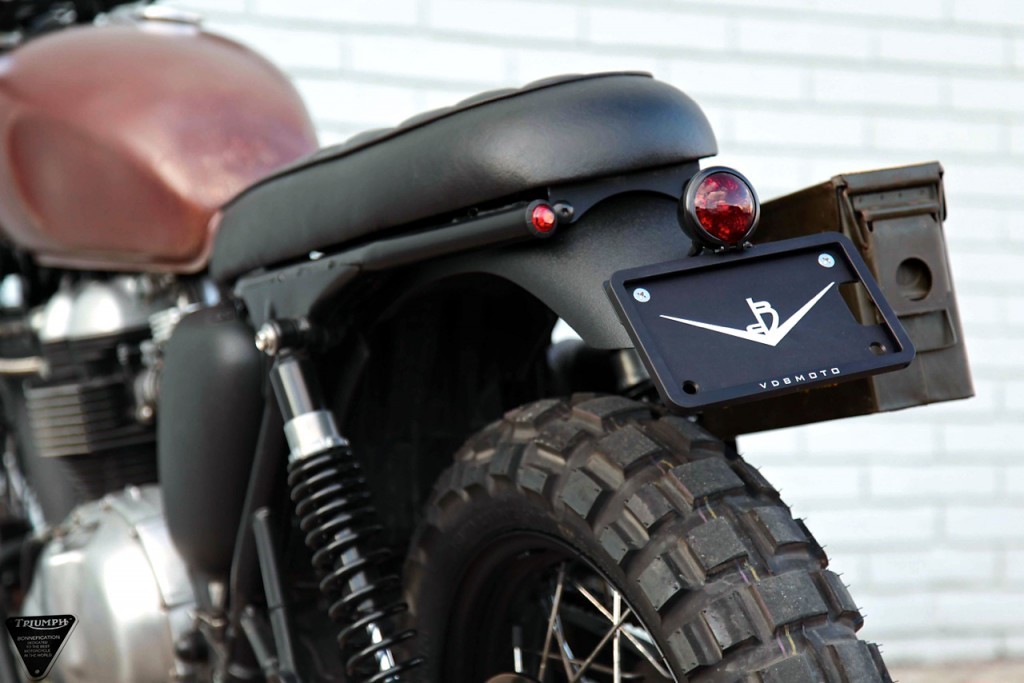 Spending a lot of his time in upstate NY, Derick often take the chance to take his Scrambler for a bit of off-road fun. Derick believes the Triumph Scrambler is more than capable off-road as well as being a great base bike for something special. It’s his joint love of off-road bikes, with their ‘freedom to go anywhere…’  looks and classic machines that inspires Derick in what he builds.

“I love to ride dirt bikes I personally don’t find them aesthetically attractive, and that’s why I like to mix the 2 style together” 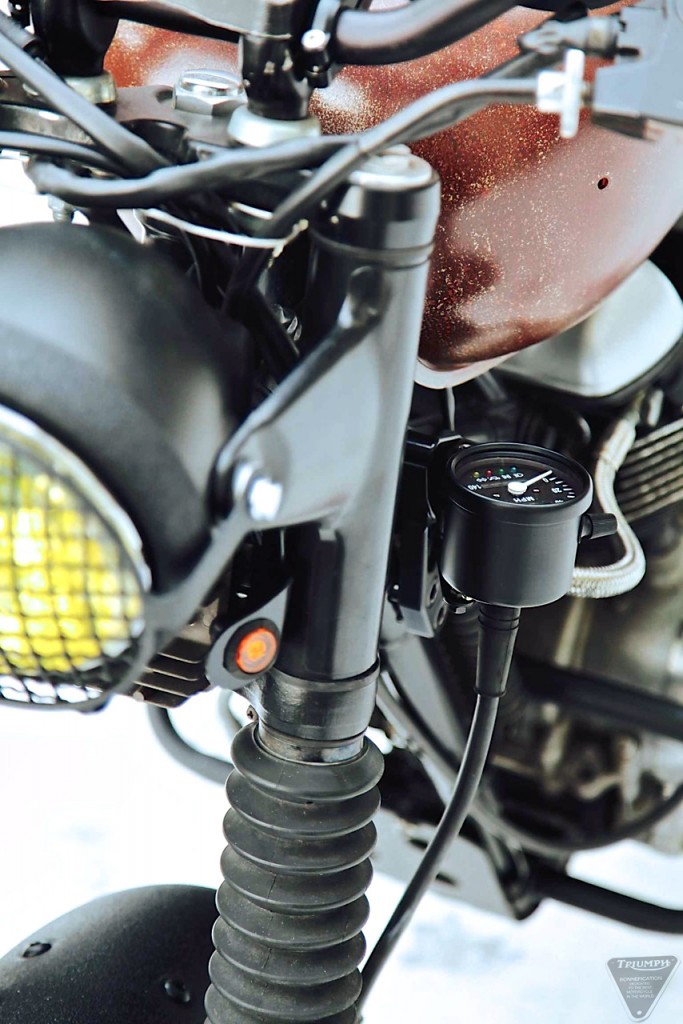 So to the Scrambler

The original Triumph Scrambler has been stripped down and many parts have been upgraded or removed to shave off a few pounds in the process. The tank has been stripped down to bare metal and with the help of a vinegar/salt solution, the rust process was speeded up to create a real patina that only a few years of bad weather to an abandoned piece of metal would reveal. 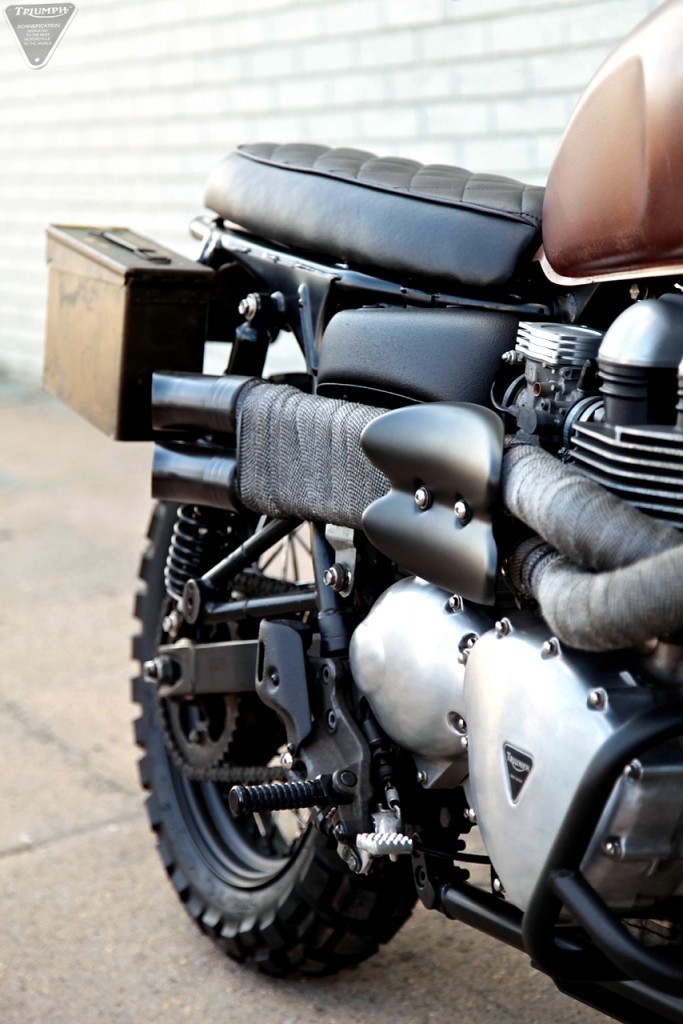 The headers have been shortened, wrapped and fitted with 2 mini GP style mufflers leaving the original bracket as a support for the ammunition box. The ammo box is an original survivor piece from the Vietnam war and its perfect to store the bike cover and lock, or alternatively an excellent place to hold your pick-nick set and a 6 pack for the occasional Sunday trail excursion in the country. 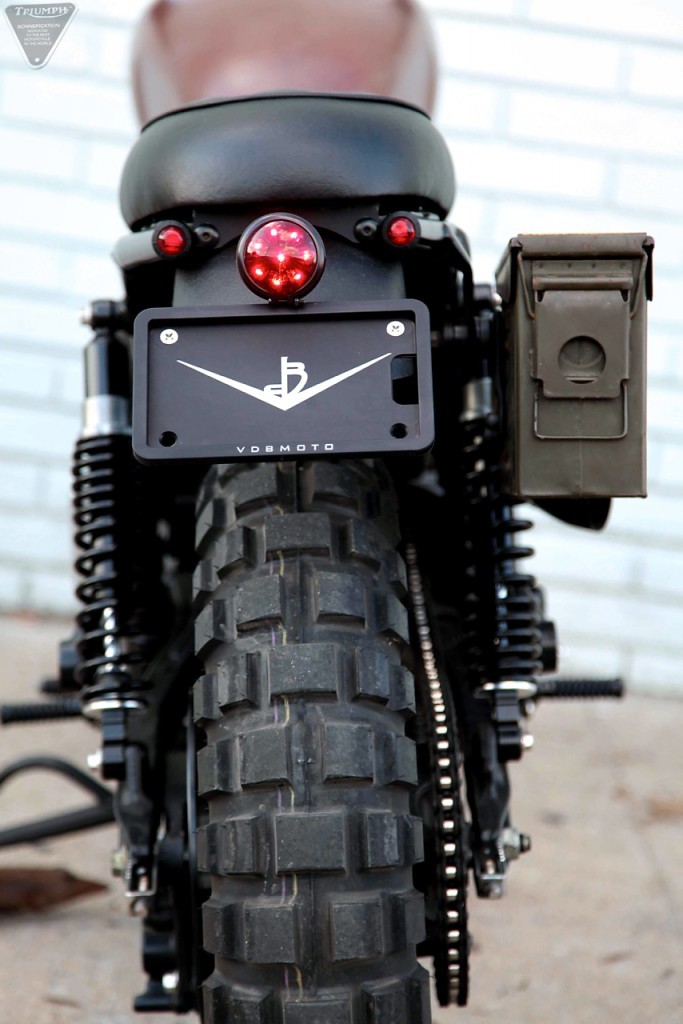 The paint used for the new fenders and several parts of the bike is a bedliner protective coating, that gives an added rugged texture and durability. The original cluster and instruments are gone and replaced by a mini led speedo that has been fitted to the left side of the engine with the ignition key relocation, leaving space to the Renthal ultra low handlebars 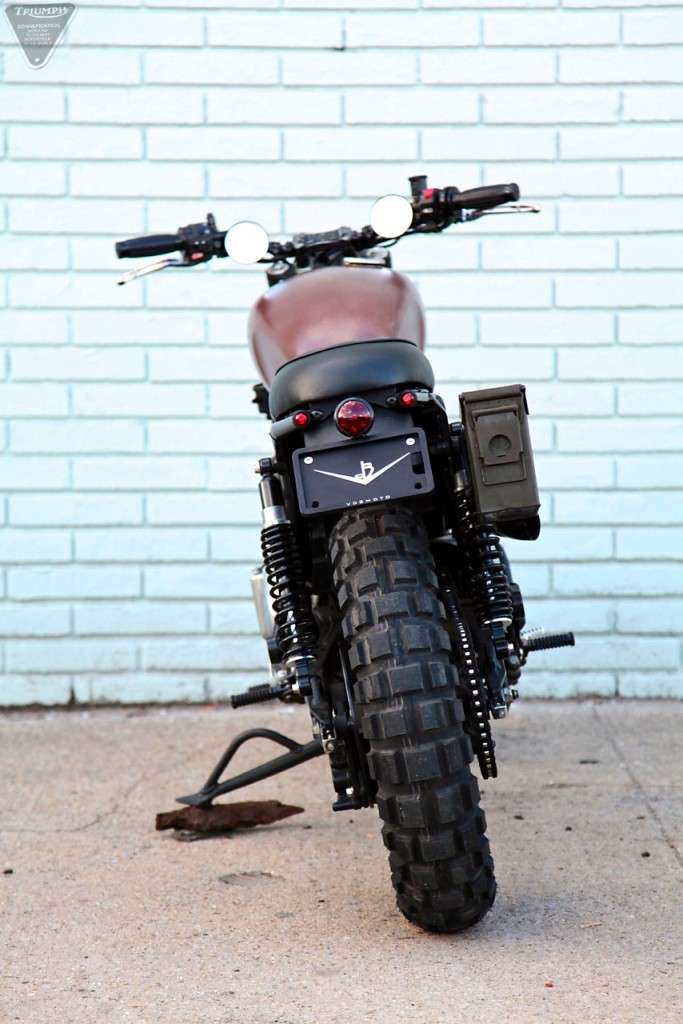 The low profile seat is custom made and covers the tubular frame just until the end, where the LED indicator lights have been fitted and wired inside the actual frame of the bike giving it a cleaner look. In the light department the back has now a LED bates style light and the front has a yellow headlight filter protected from the black grille. 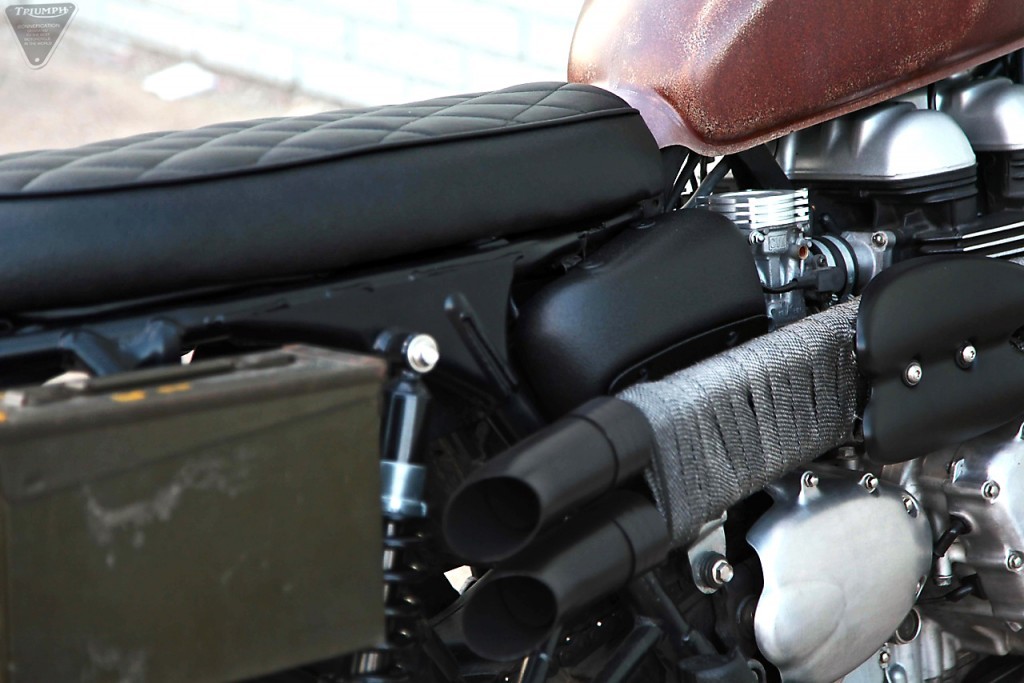 The suspension has been upgraded with adjustable Hagon shocks at the rear with an added inch in length and progressive springs at the front. Accompanied by the oversized but also good on pavement Continental TKC80 and a higher centre of gravity the bike is great for any kind of road with a very up right and comfortable riding position (very much needed in the nasty streets of NYC). 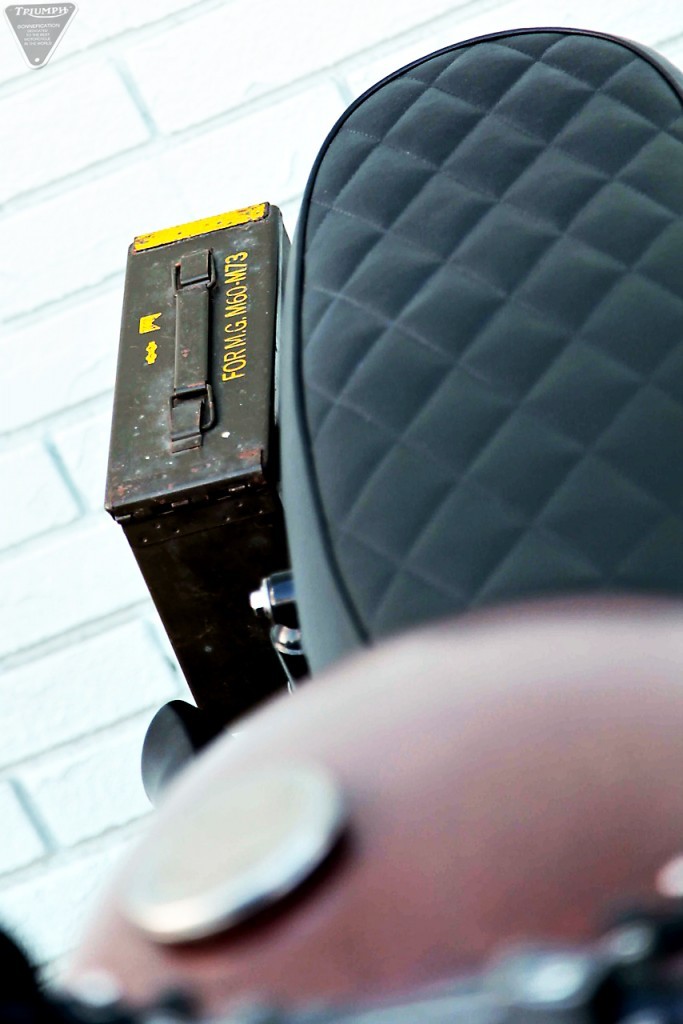 With the added power of the new exhaust, K&N filter and the shorter gear ratio it feels like a totally different bike, with plenty of power at the low end making it a blast to ride.

Derick of VDBMoto considers this Scrambler his first real build as it’s ‘the first one to roll out my garage with the proper attention to detail’ Clearly it wont be his last. 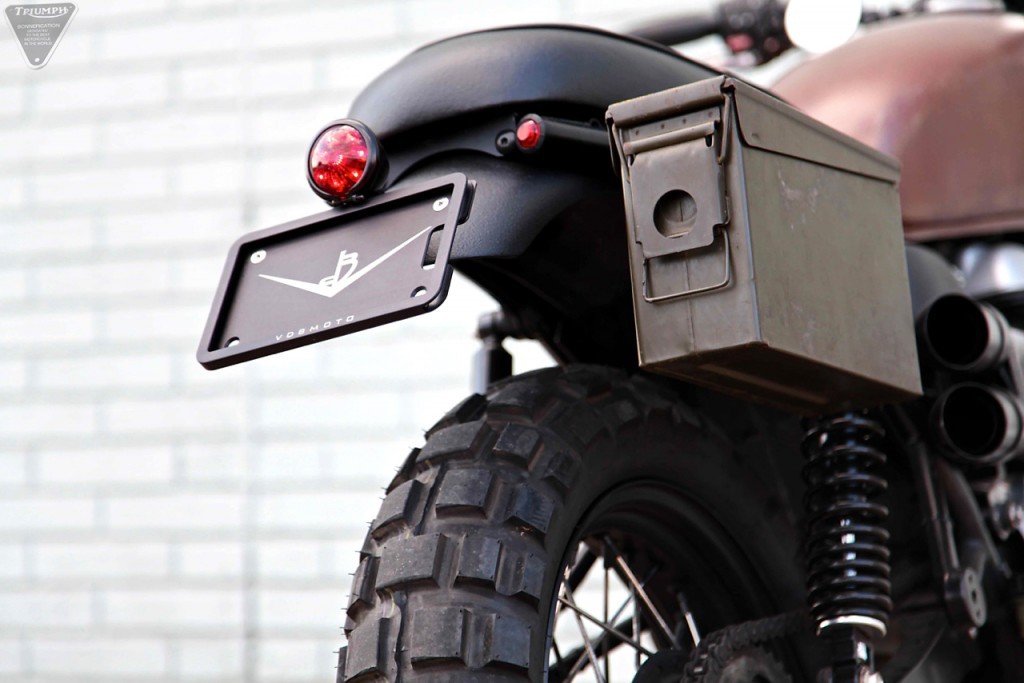