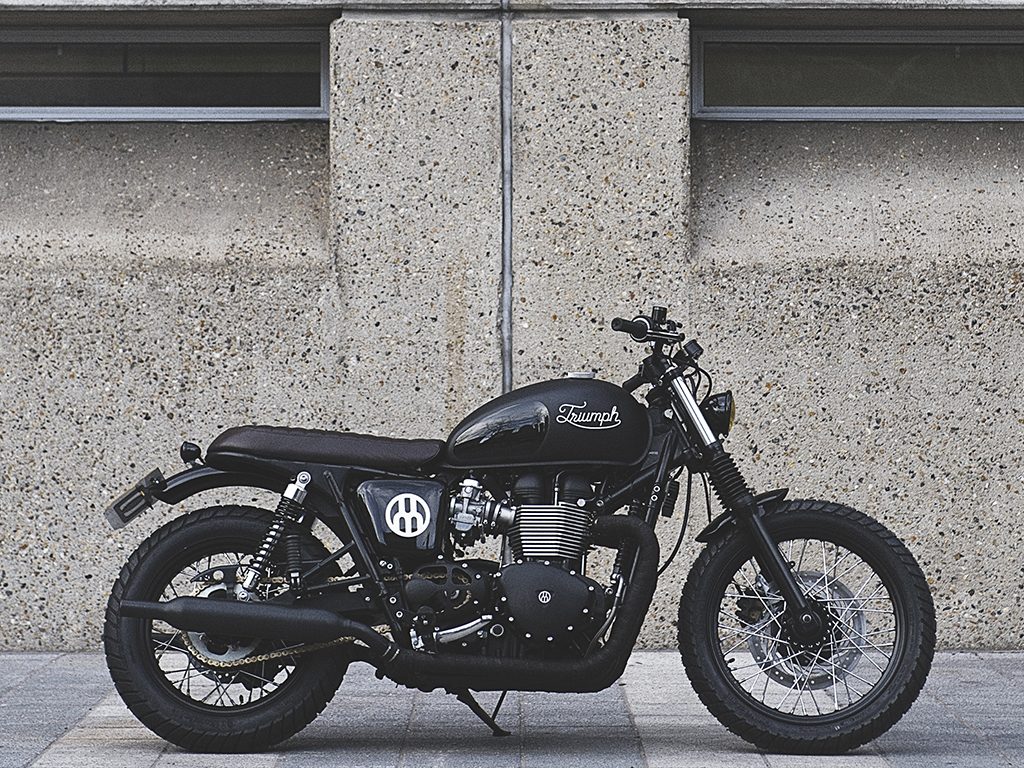 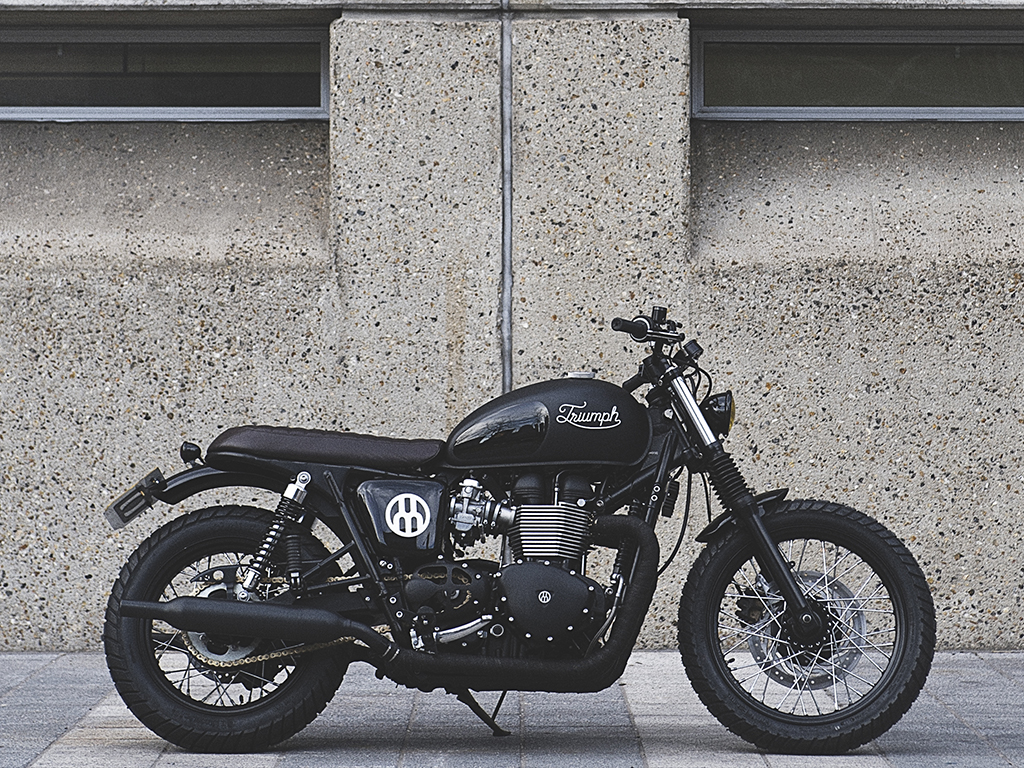 If you were one of the many motorcycle enthusiasts who visited the Bike Shed Show at London’s Tobacco Docks in May, it might of come to your attention that Triumph was a key sponsor – this is great news for The Bike Shed and those that visit. It’s with Triumph’s official support, the ‘Event’ as it was once know, has been able to grow into one of the most important shows in the new wave motorcycle calendar. 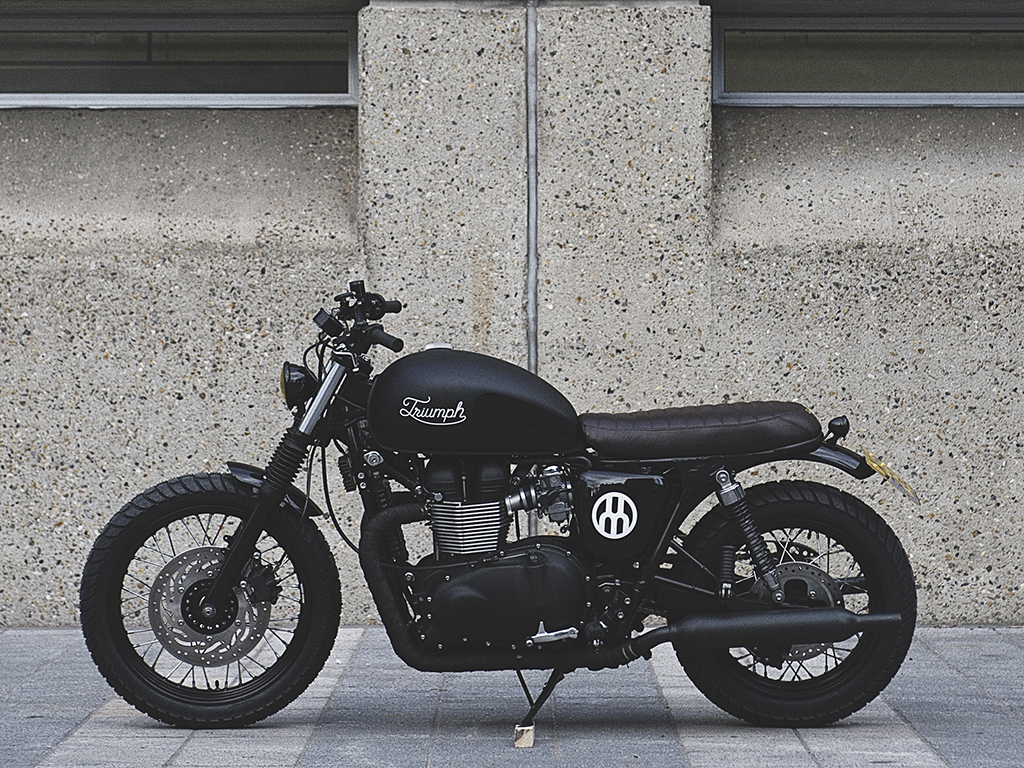 When I was first invited to the Triumph HQ three years ago, it was clear that Triumph desperately wanted IN on the emerging ‘New Wave’ scene, as well as needing a foothold in the custom accessories market, a market, for the air-cooled machines at least, is quite rightly dominated by independent manufactures. 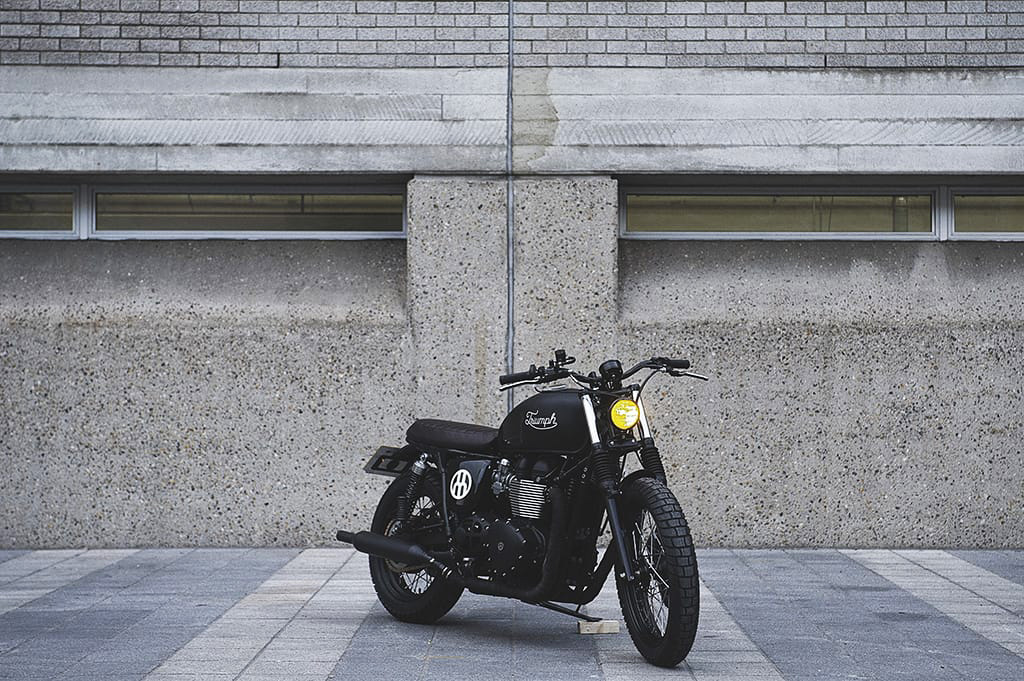 I wasn’t aware three years ago just how far Triumph would go to promote custom and modified Twins, or how extensive their range of bolt on accessories would be – though it’s nice to see they were listening when I mentioned that fairings will soon make a ‘come back’, and super tricked out Thruxton’s ‘would sell like hot cakes!’. 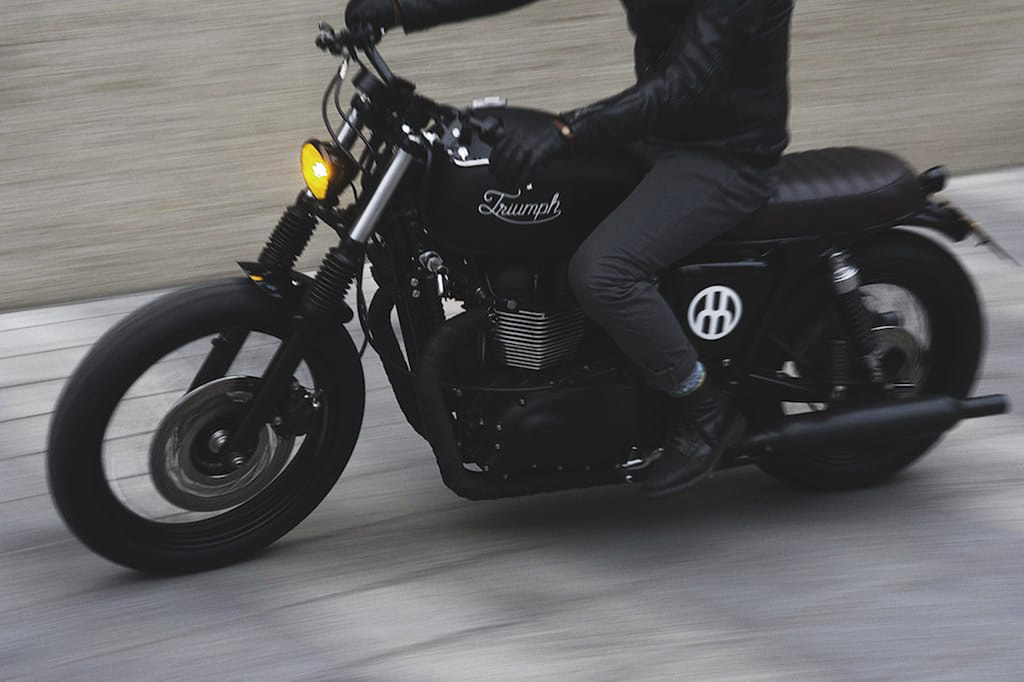 While at The Bike Shed show I spoke to builders who were showing customs based on the older, and perhaps more modifiable air-cooled Hinckley Twin. One such build was by Untitled Motorcycles, which was founded in 2010 by Adam Kay and Rex Martin, a team which can boast forty custom builds to it’s name. 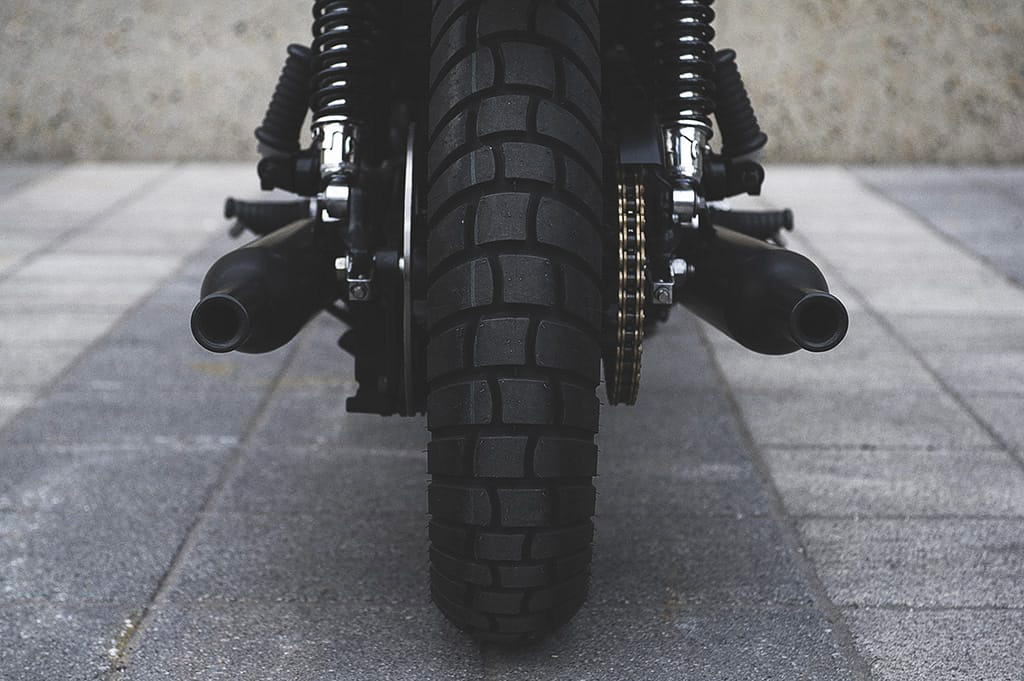 Untitled Motorcycles don’t build motorcycles to just ‘sell‘, each bike is a commission, with this 2014 T100 being built for Paul Shobnrook, a client who wanted a stripped back, light weight, chrome free and well handling Triumph Twin. 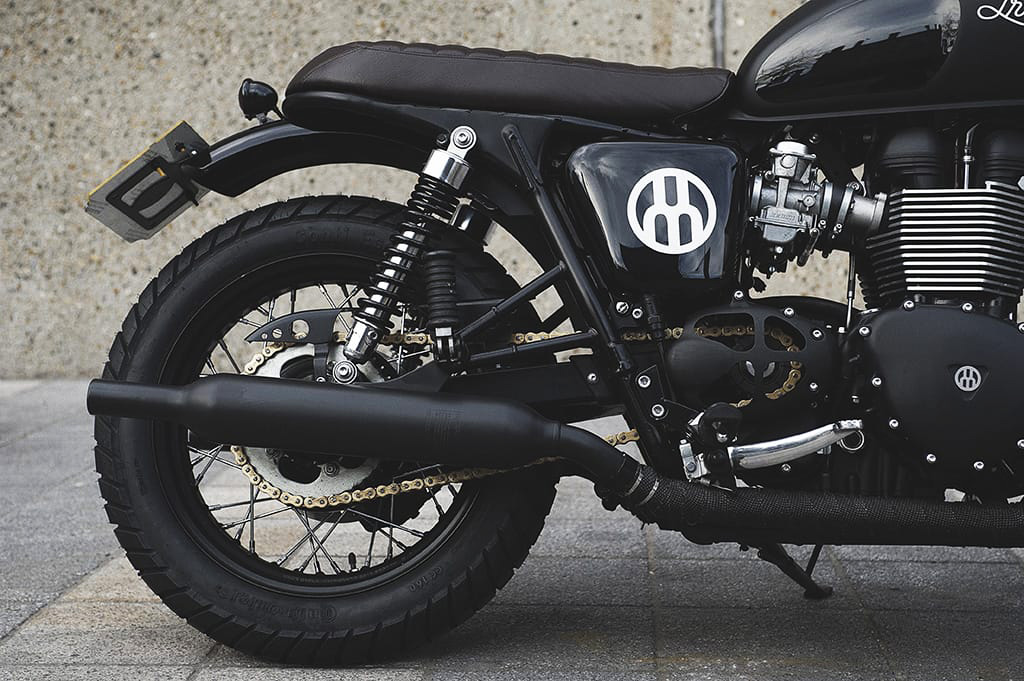 The T100 underwent the usual frame modifications, before being fitted with a custom made seat base fabricated from aluminium, and covered in brown leather by Glenn Mogor. The bobbed rear mudguard was destined for a Royal Enfield, but instead was modified and made it’s way onto the Triumph. Which was then fitted with a Bates style LED tail light, with the front mudguard also being reduced in size. 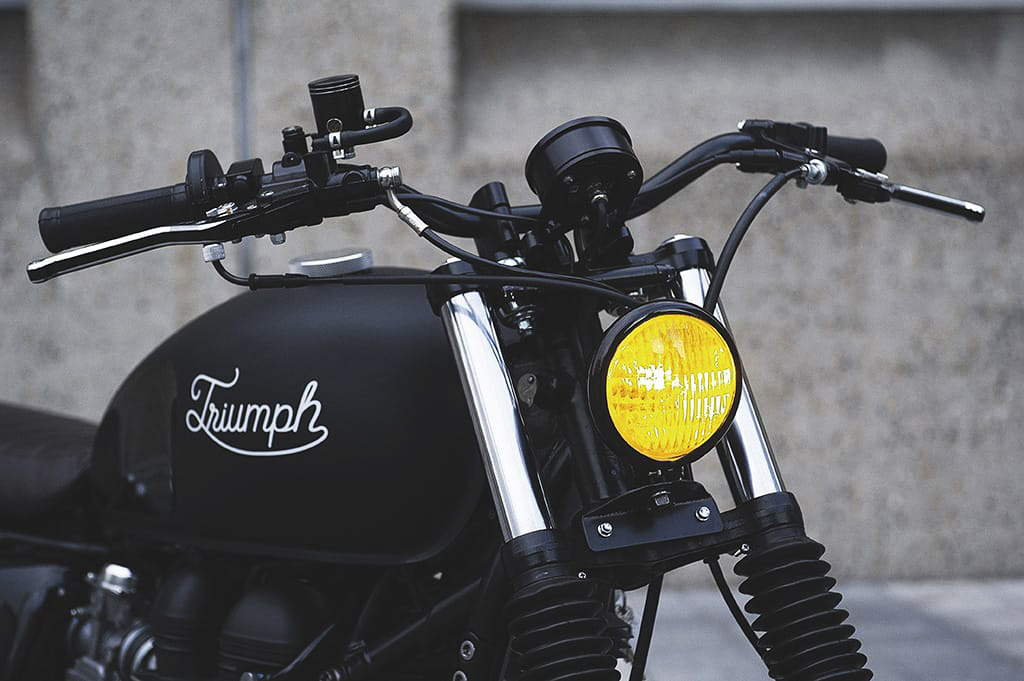 At the front is a bottom mounted Bates style headlight, fitted to the Twin using a bracket fabricated in-house. This Triumph may appear not to have any turn signals, in fact these have been cleverly hidden, with the front Motogadget m-blaze signal being concealed in a tube mounted just forward of the top yoke, with the rear sitting just behind the top shock mount. 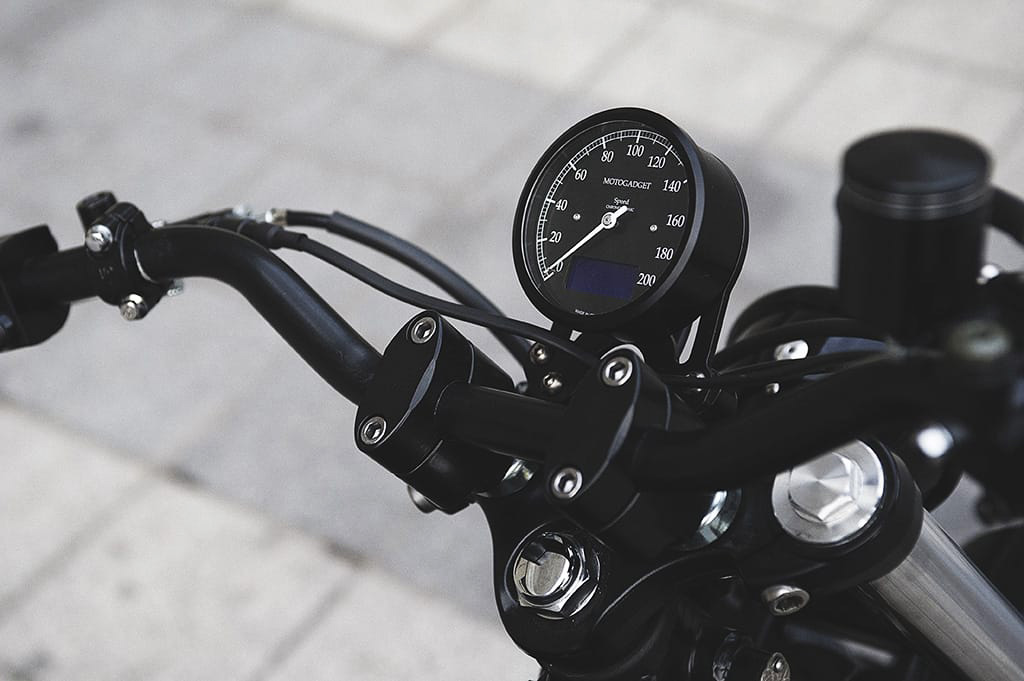 The stock bars, risers and levers have been replaced for something monotone, with the throttle body being changed for a short action unit. The OEM switches have gone, replaced by a set of Motogaget m-Switches paired with the Motogadget tri-unit box of tricks. With the oversized speedo being swopped for the super sexy Motogadget Chronoclassic speedo, made possible on these CANbus models by using the Motogadget m-TRI adapter. 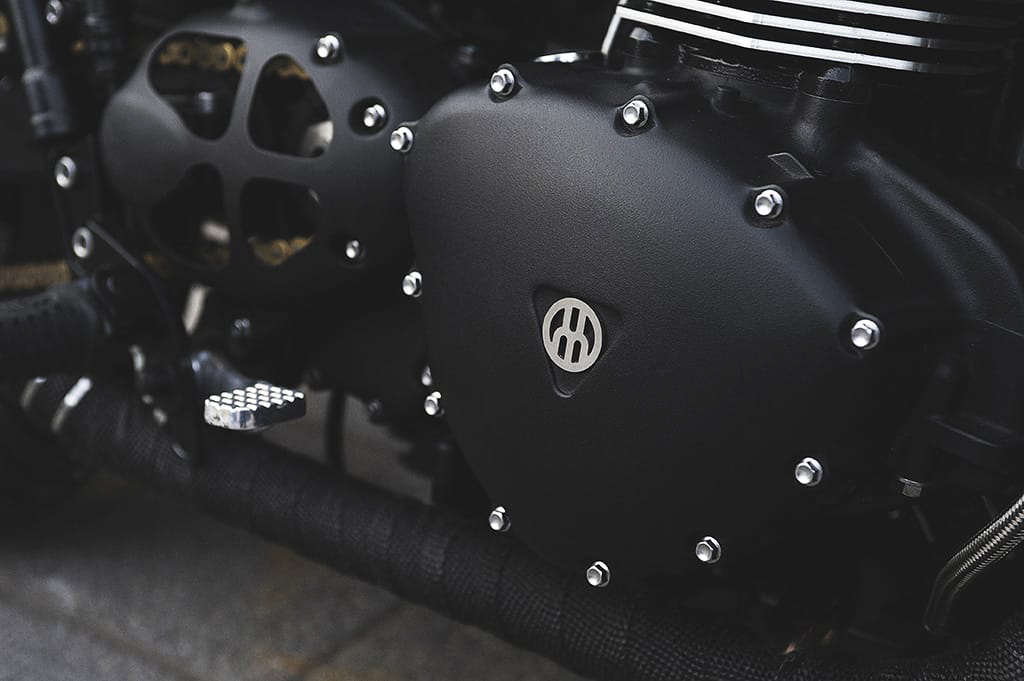 The engine compartment hasn’t missed out, with the sprocket cover getting all  the attention. Adam didn’t like many of the off-the-shelf covers on the market, opting instead to modify the one already on the Triumph. Half a day later, Adam re-emerged from the workshop with the finished cover, which was promptly dropped off at the coaters for some black powder, before being fitted back to the T100. 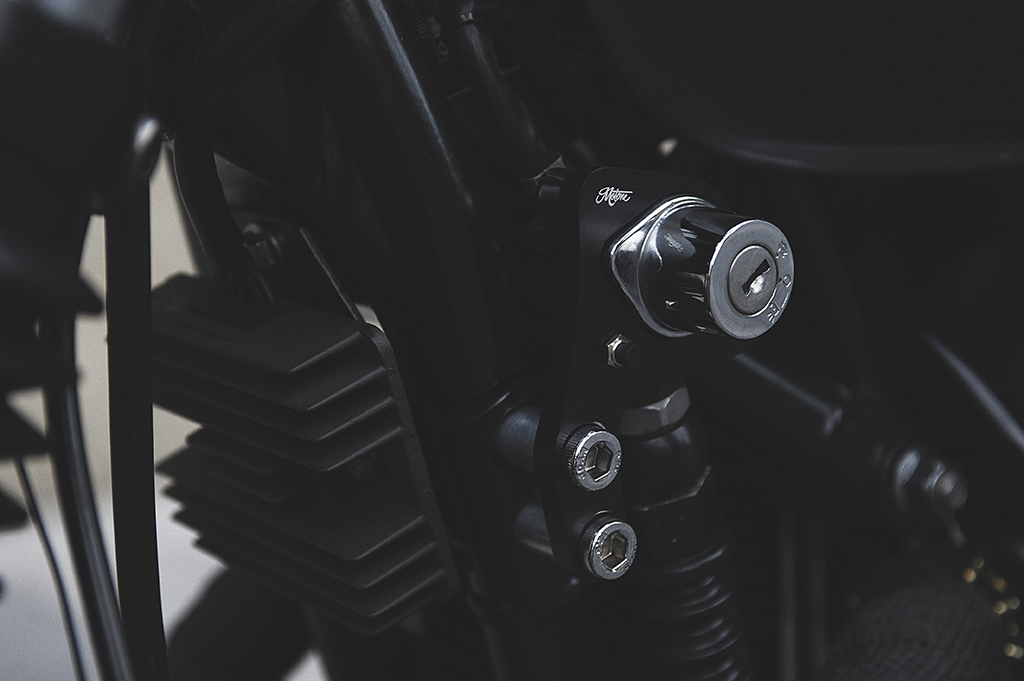 Other details on the build include all the usual relocation brackets, which on this occasion are from Motone Customs. Paul’s monochrome theme continues with black end cans on black wrapped headers. To give the T100 the rugged off road look, popular for the last few years, the Twin was fitted with a set of Continental Escape dual sport tyres, which Visor Down described as “A special tyre for riders who are equally at home on tarmac and off-road”. 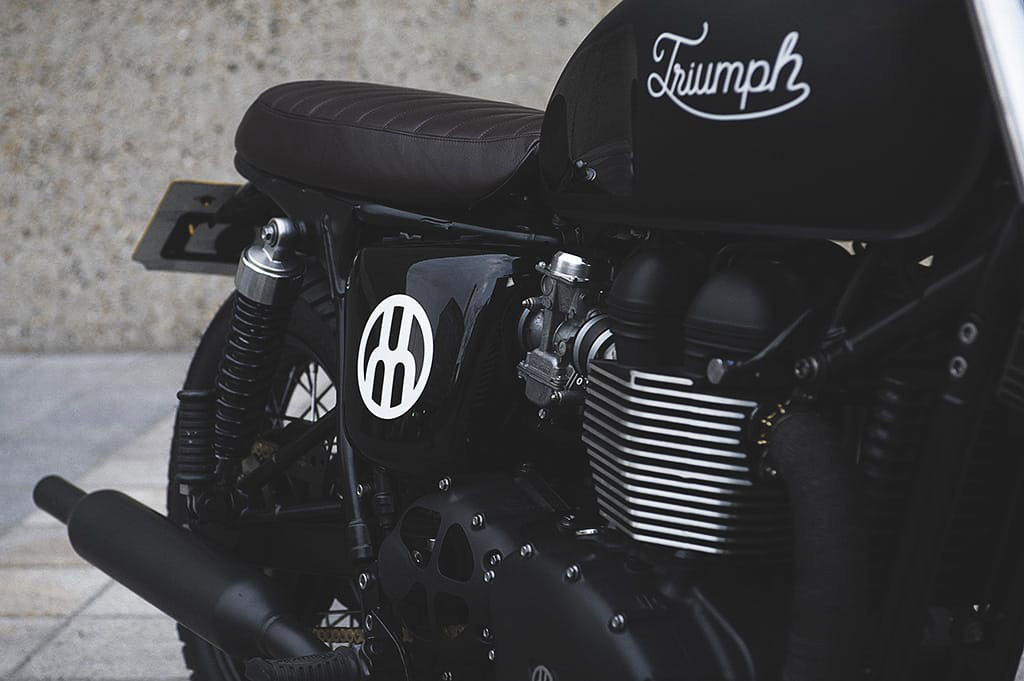 Finishing the build of is a very cool matt tank with gloss black side panels, which was painted by Dennis at D-Lucks, topped-off with Triumph graphics designed by Paul – who also didn’t want to be shy about who built the bike, having the Untitled Motorcycles logo on the side covers and engine cases. 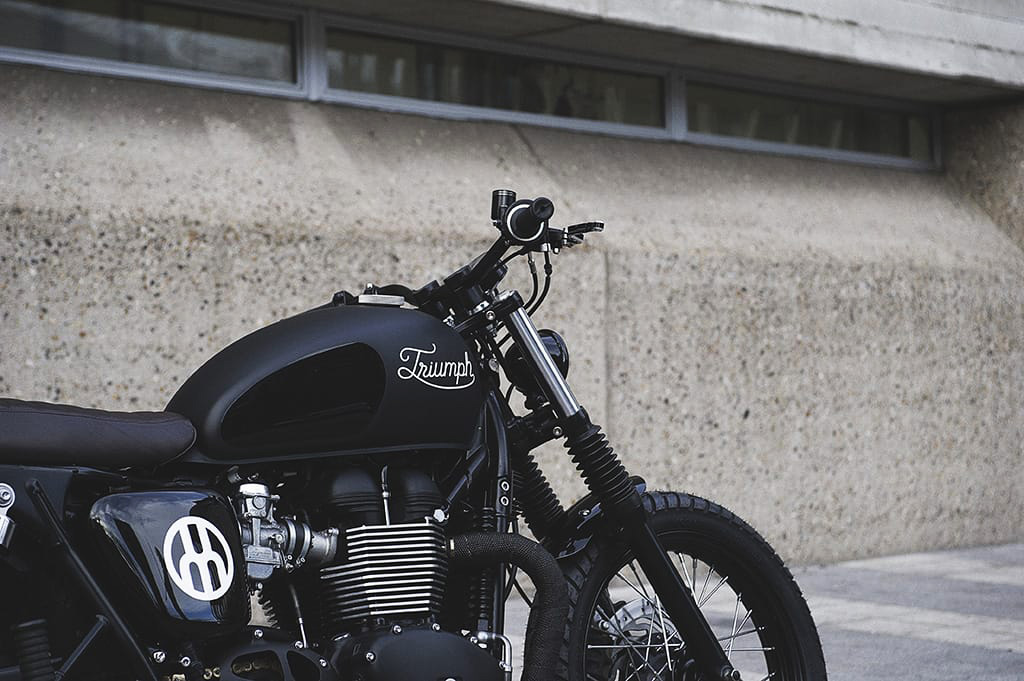