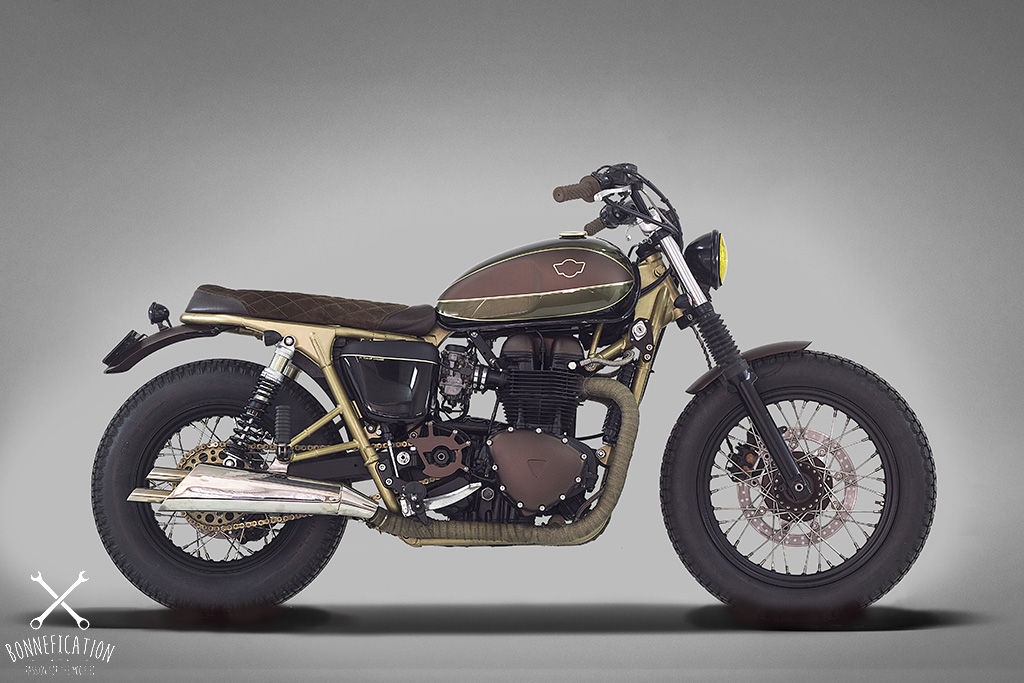 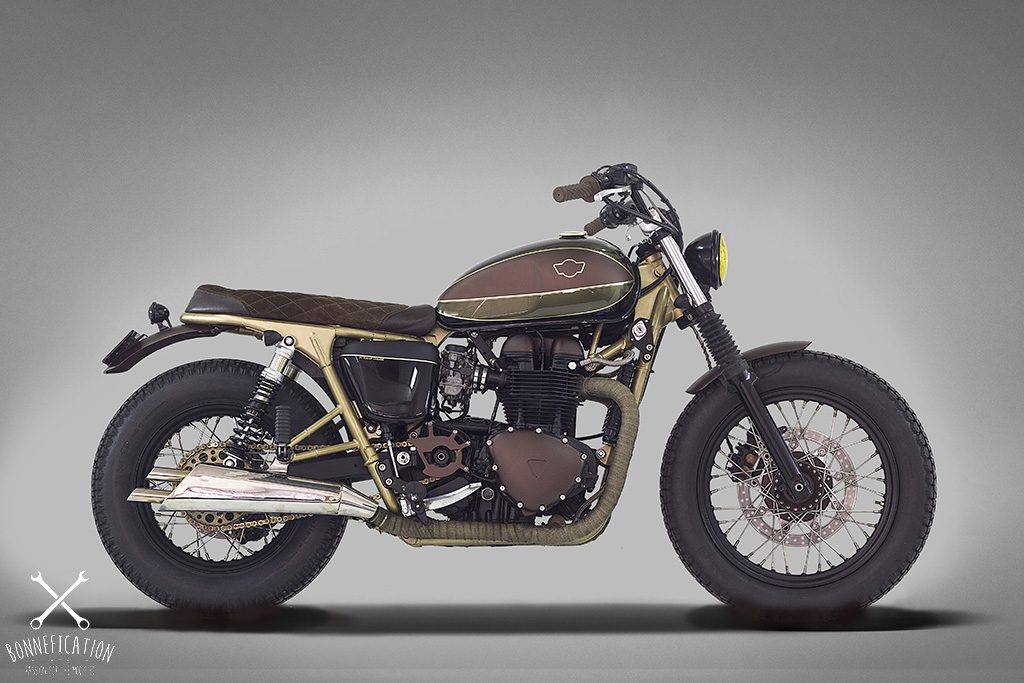 Ton-Up Garage is a well know name in the custom Triumph world, having built over half a dozen bikes based on the Hinckey Twin. Their builds include the ‘Crane’ Urban Pearl’ Amazonia, Soultrain, Hiawatha, Hellzapoppin and now their latest build the Kiwi, a build based on a carb model Bonneville. 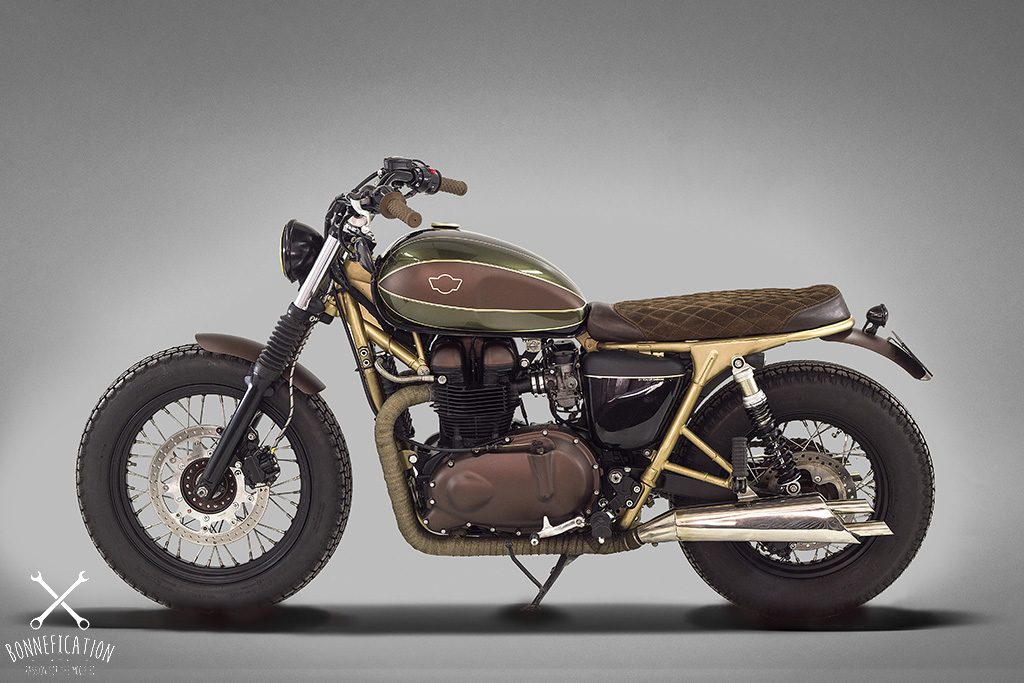 Daniel and Pedro of Ton-Up did go into why this Triumph Twin was given the name Kiwi, but to cut a long story short this Triumph is more ‘exotic’ than their previous builds… and it cant fly…. or something like that.

To get the desired ‘exotic‘ look Daniel and Pedro were after the frame was shortened and looped, but rather than blending in the frame modification to match the factory black frame, Daniel and Pedro had the entire frame painted gold. This is not something done by many pro-builders due to the time involved stripping the bike down and getting all the components painted. 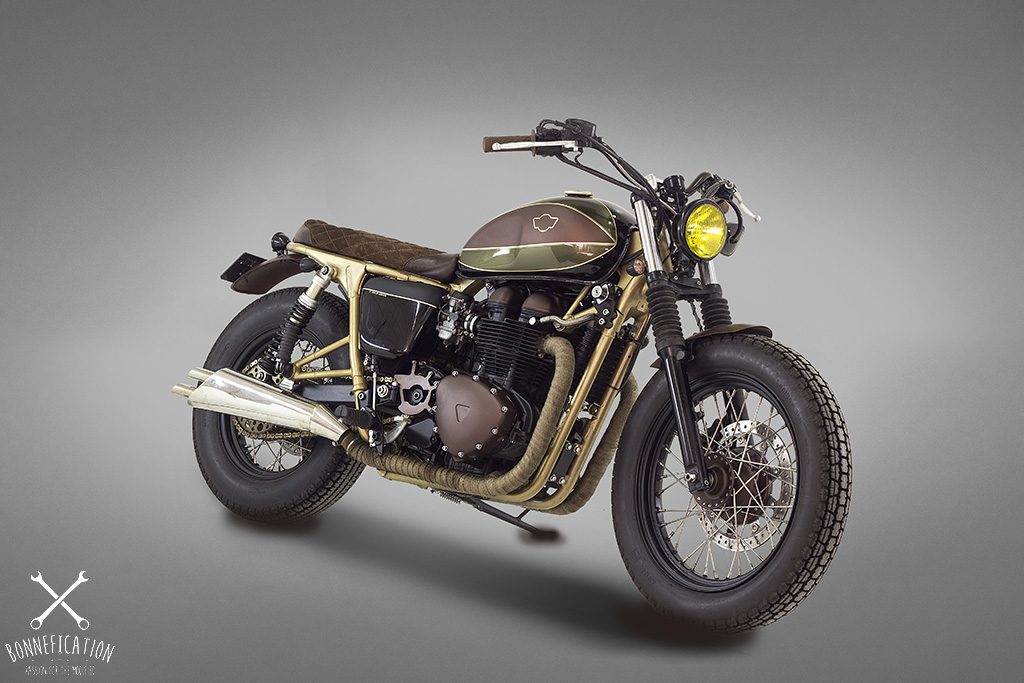 From my own experience a full strip-down can be done in an afternoon, whereas a rebuild may well take several days to complete properly. Add to that the time the frame is away at the painters, you are looking at approximately two weeks before all the parts can be reunited and the bike rebuilt compared to just days if  the frame was blended in. 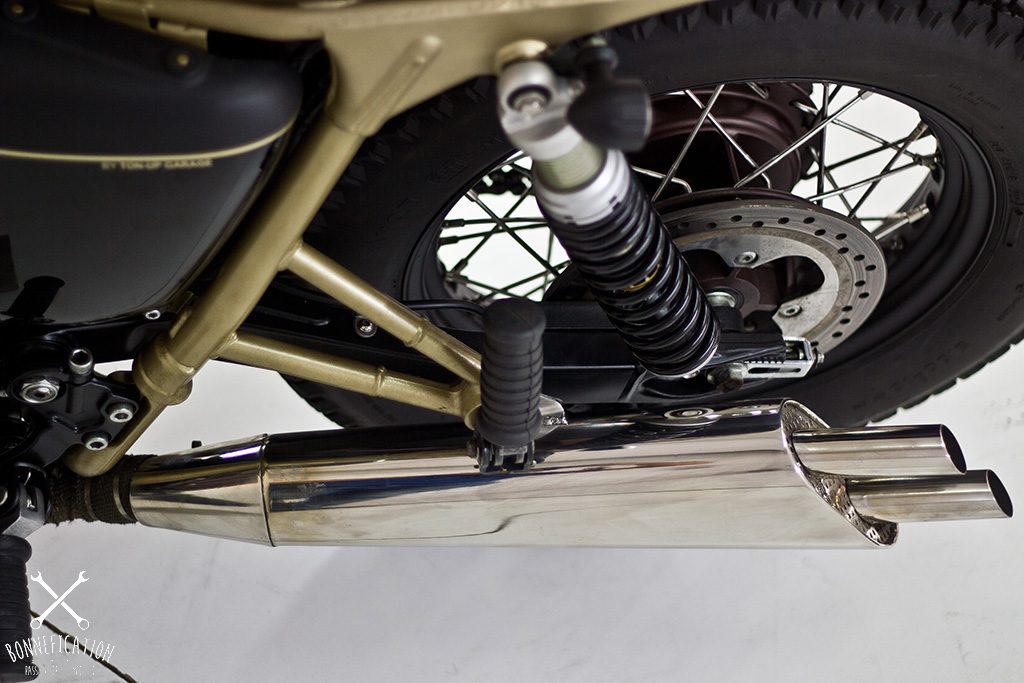 When the bike is in pieces, this is a good opportunity to get all the nuts and bolts zinc coated so they all look good as new when you put the bike back together, something which and is not expensive to have done. Also If you do consider a full strip-down be aware that not all the plastic clips come off easily, with many being prone to breaking. 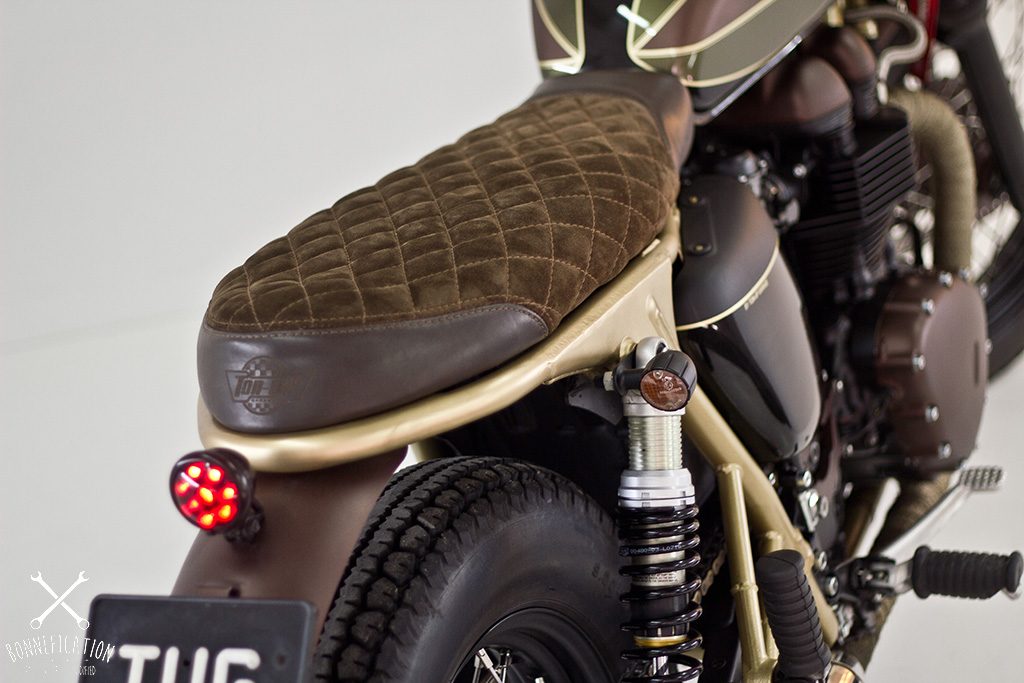 On the Kiwi build, to contrast that opulent gold frame, the tank was painted in a very fetching brown, black and gold combination in a pattern slightly reminiscent of a Rugby Ball, a ball which has then been topped off with a gold coloured cap. 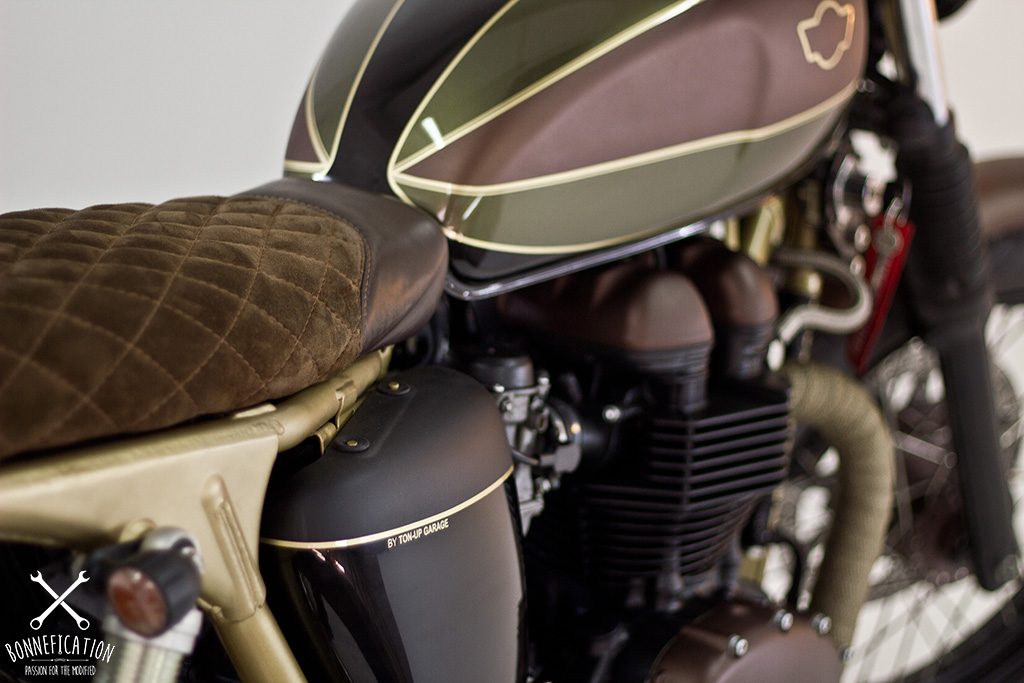 The overall effect makes the tank resemble something you may find in a sweet shop, perhaps a chocolate rugby ball which has melted and dripped down onto the Ton-Up (TUG) custom sprocket and engine covers covering them in the same rich brown. Surprisingly the side panels haven’t received this treatment, remaining black with satin and gold detailing. 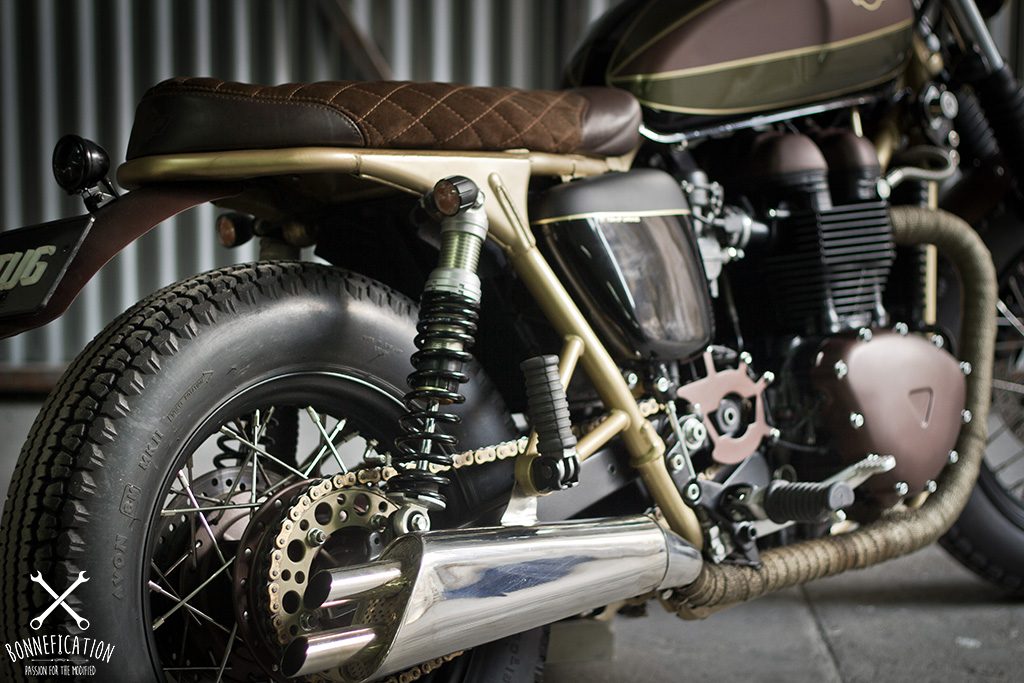 Continuing the theme is a super sexy diamond stitched seat was made by the guys at Ton-Up Garage. A seat which has been shaped to match the curvature of the frame and loop, before finally being upholstered in brown suede and leather, leather which was supplied by Portuguese shoe maker ‘Nobrand’… classy!

Keeping the spray at bay, painted front and rear mudguards have been fitted with the rear sporting a Bates style LED taillight. Which has been paired with a 4.5″ Bates bottom mounted headlight and Shin-Yo Arizona turn signals. These have then been relocated to the rear shock mounts and to the bottom yoke behind the front stanchions. 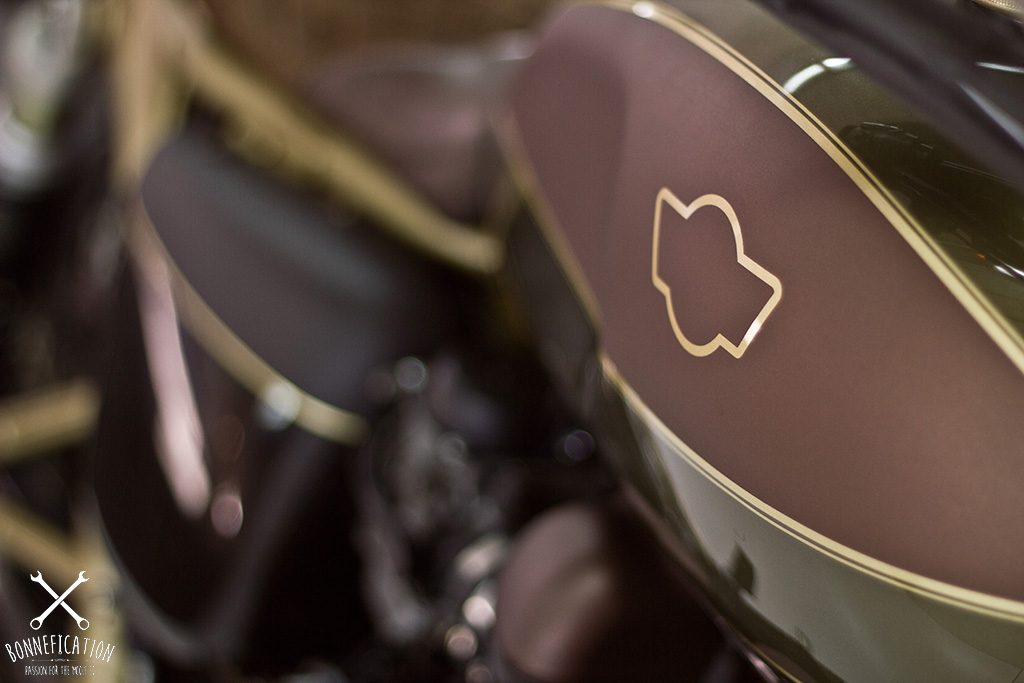 The stock handlebars on the Kiwi have been replaced with Black 1” LSL Flat Tracker handlebar along with Biltwell Thruster Grips and stock OEM Switches. The speedo on the Kiwi is the popular Motogadget Tiny which is a perfect fit for such and opulent build. 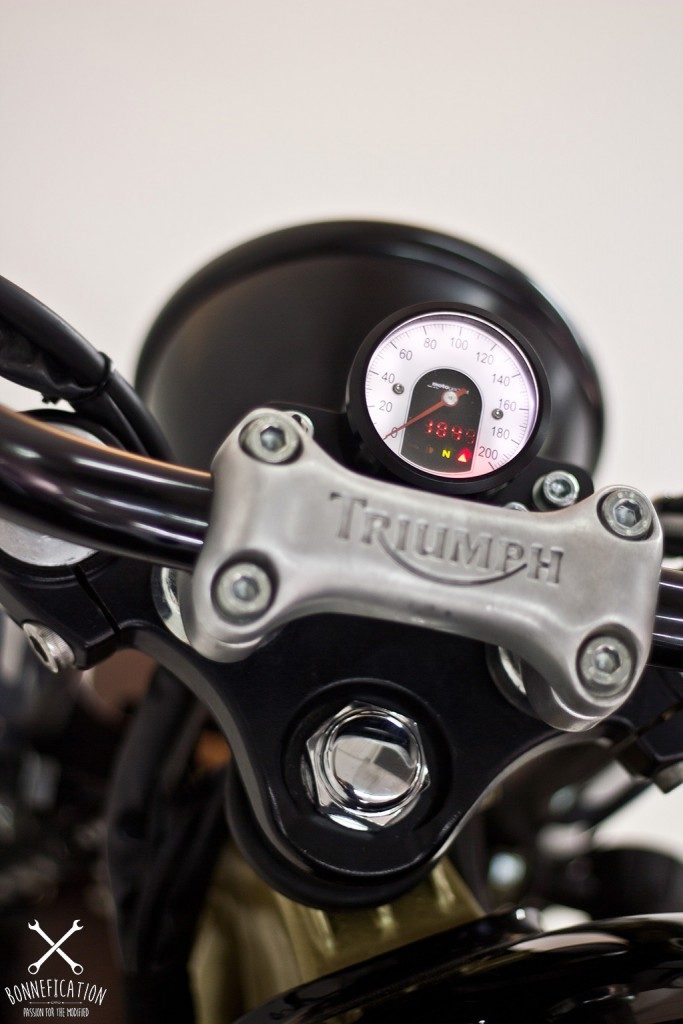 The exhaust on the Kiwi is rather special and a style of exhausts not seen before on Bonnefication or elsewhere until now. For this exhaust has been made by Ton-Up Garage and is an exhausts which is inspired by the cars of the fifties, which in-turn were inspired by the whole ‘future scene’ of space travel and sci-fi craze of the time. Designed to be ‘ plug and play’ these exhausts will be available from Ton-Up garage shop from September. 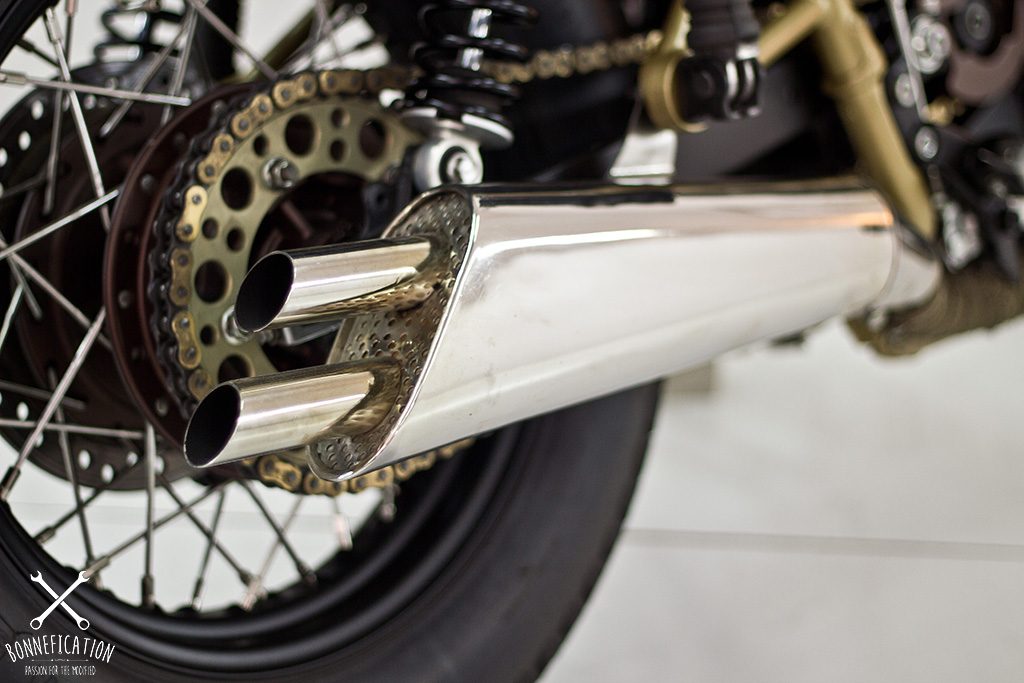 To finish this rather exotic Triumph Twin, the stock wheels have been shod in the retro Avon Safety Mileage tires which I rather like the look of, also the stock OEM shocks have been upgraded to units from Ohlins. Again another great looking and well put together Triumph from Daniel and Pedro of Ton-Up Garage. 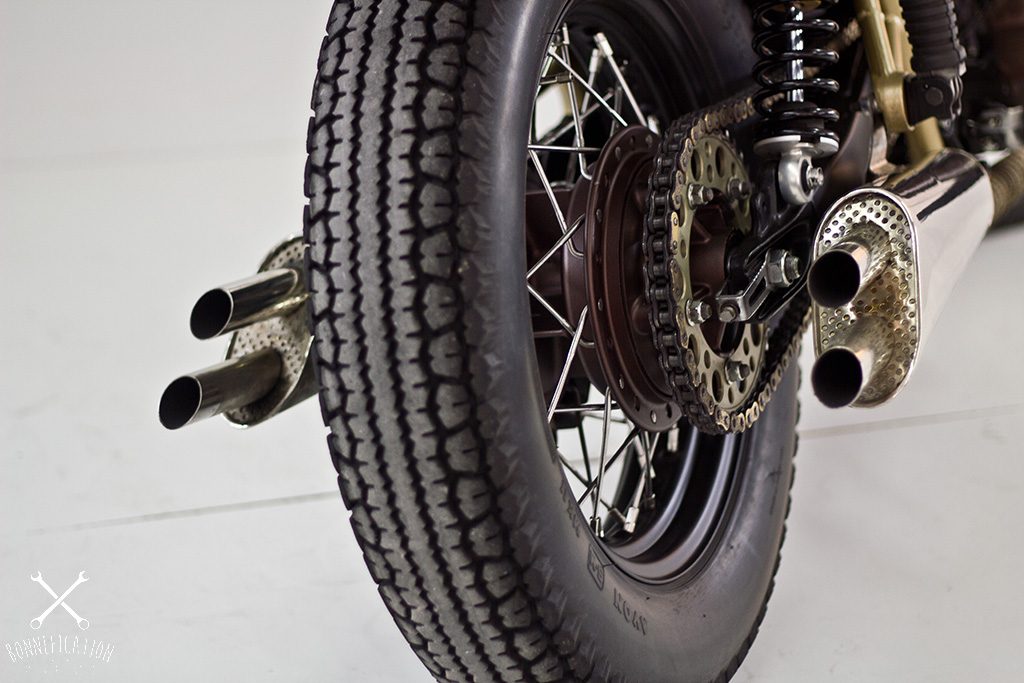