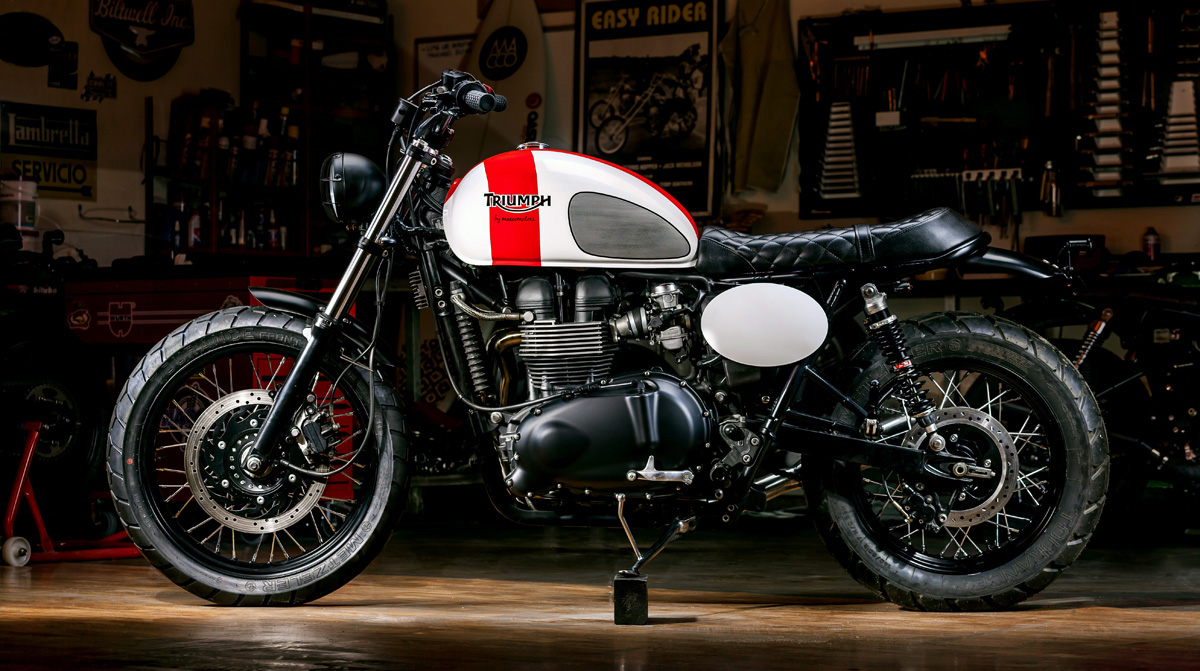 If you are of a certain age you may remember the TV series The Saint, starring Roger Moore as the mysterious Simon Templar. A Robin Hood style character who appeared to only help attractive women out of dangerous and dramatic situations. Simon was in fact no Saint, or a Robin Hood, choosing to keep any monies stolen from his criminal targets, and to snog the face off his female co stars. Simon’s vigilante antics made him unpopular with the Police, so at some stage he may well of been pursued by a policeman on a Triumph TR6P, a 650cc Twin nicknamed the ‘Stop Anything In No Time‘ aka the Saint … Ironic. 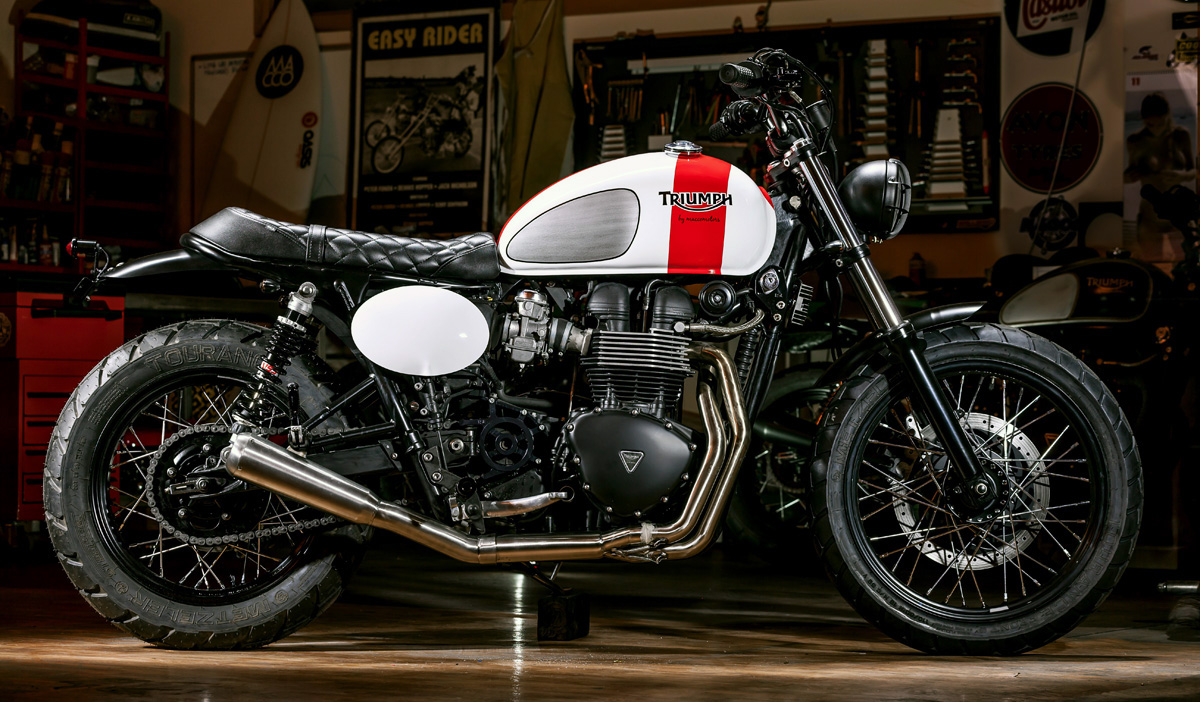 But It wasn’t a fictional British TV character or a Police Triumph TR6P which was to inspire Macco Motors latest build, but Alex, an Englishman abroad of some twenty years who commissioned two Spanish guys to customise a Thai built 2010 Bonneville T100 into something truly English! 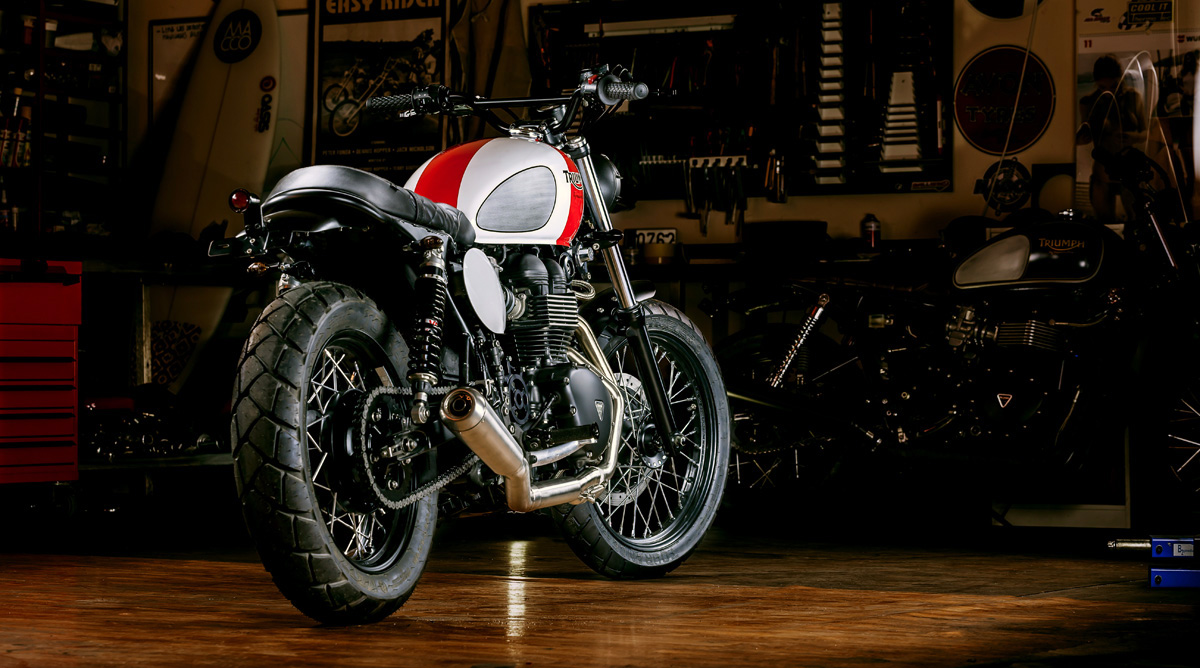 The Saint is typically Macco Motors, a style getting the team commissions from all over the world, and for good reason as Jose and Tito build good rideable customs. The frame has been cut and looped, given the classic Macco seat and custom fibreglass shorty mudguards – with the rear being topped off with a vintage style till light. Fitted either side of the T100 are Macco Motors number-board side covers, giving this build a Tracker vibe. 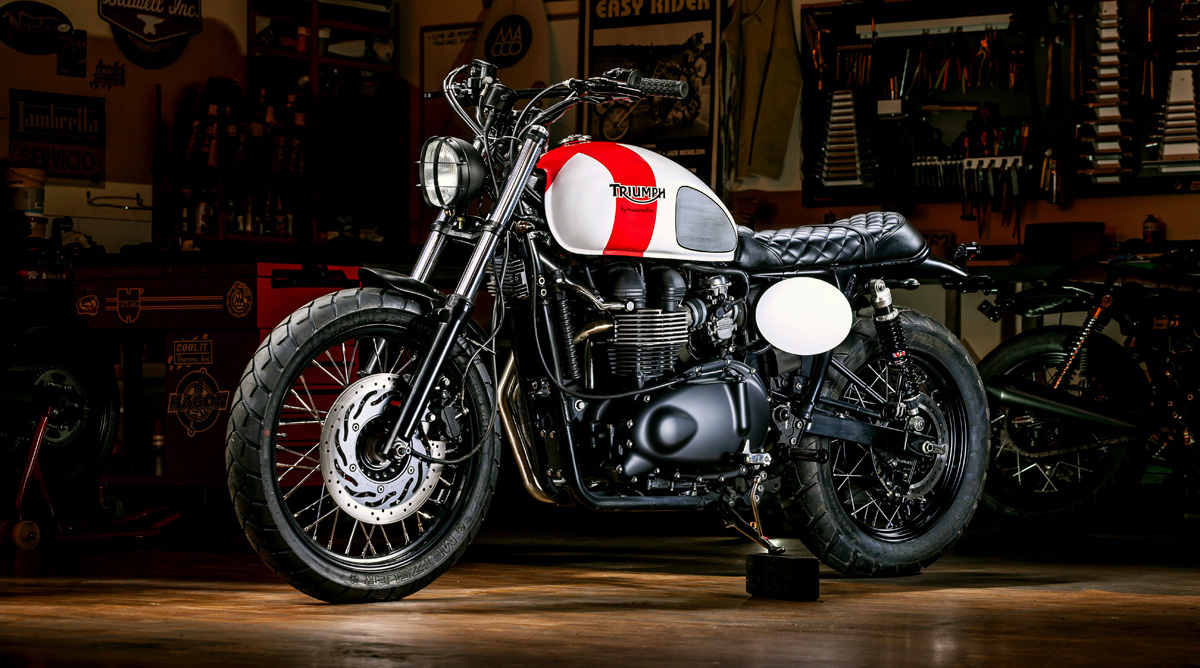 At the front is a bottom mounted 5” bates style headlight featuring a custom grill. Above which is a Braced Biltwell 1” MX bar fitted with Thruster grips, racing style levers and the stock Bonneville switches and OEM reservoir. Typically for a Macco build the bloated speedo is gone, replaced by the more compact XS650 style mini speedo. 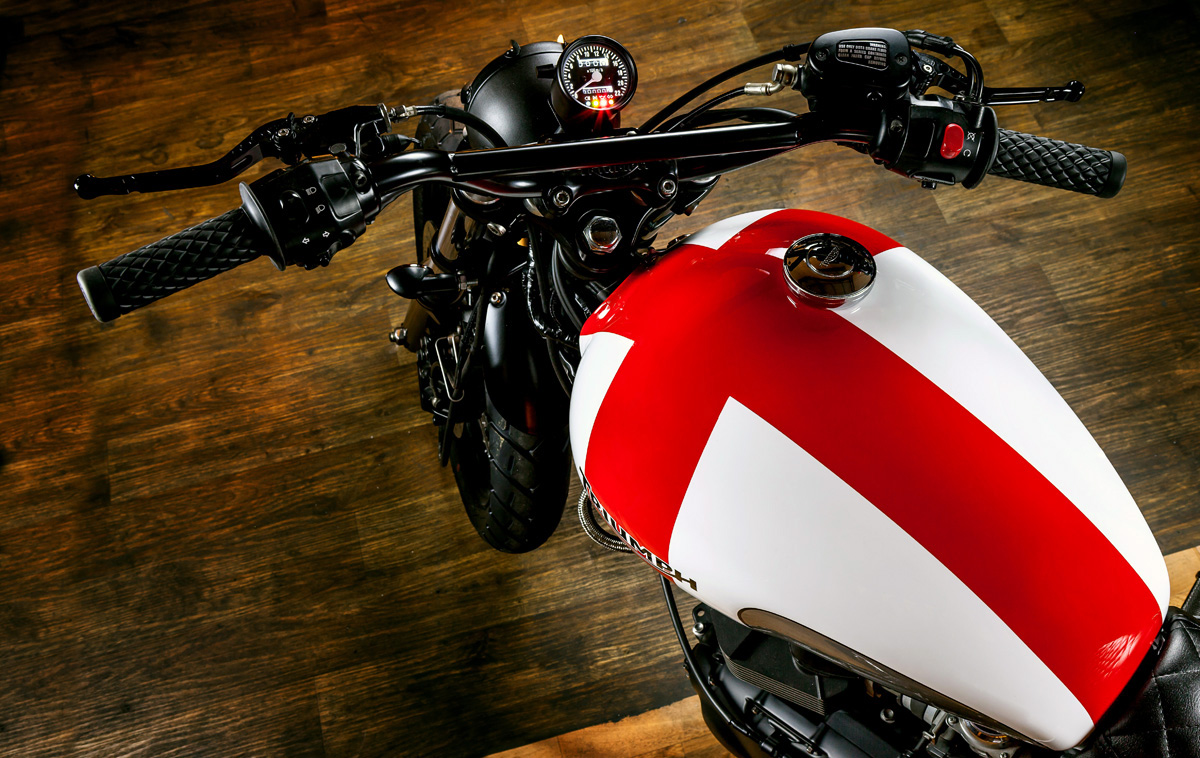 Alex, unlike St. George is over 6ft tall – so to make sure Alex was comfortable on the perfect short persons bike, Jose and Tito fitted Hagon progressive springs at the front and longer 36cm YSS shocks designed for the Scrambler at the rear, with the Biltwell MX bars also being raised by fitting 30mm riser Kit from FreeSpirits Italy. 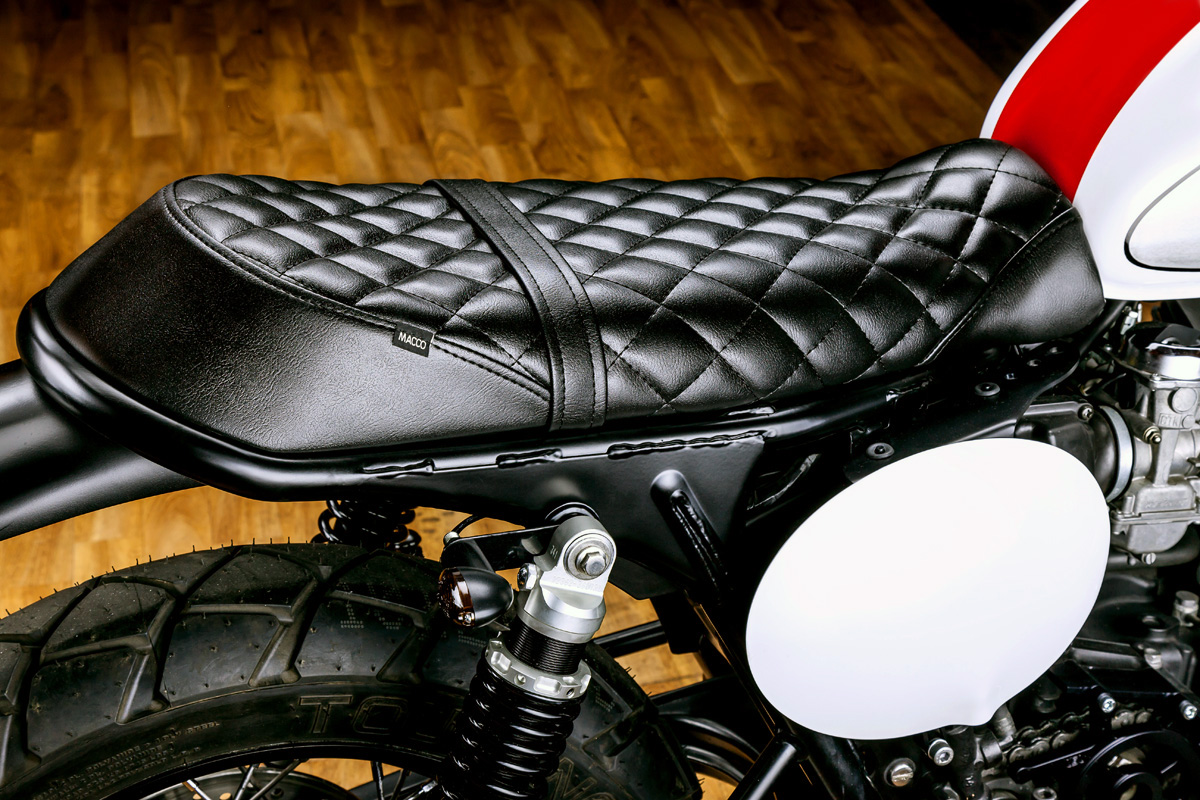 There is no missing the paint-scheme on this build – Alex wanted a design inspired by the England flag, and thats exactly what he got. Like most of Macco Motors customs, the finish also features Jose and Tito signature raw brushed metal side panels. 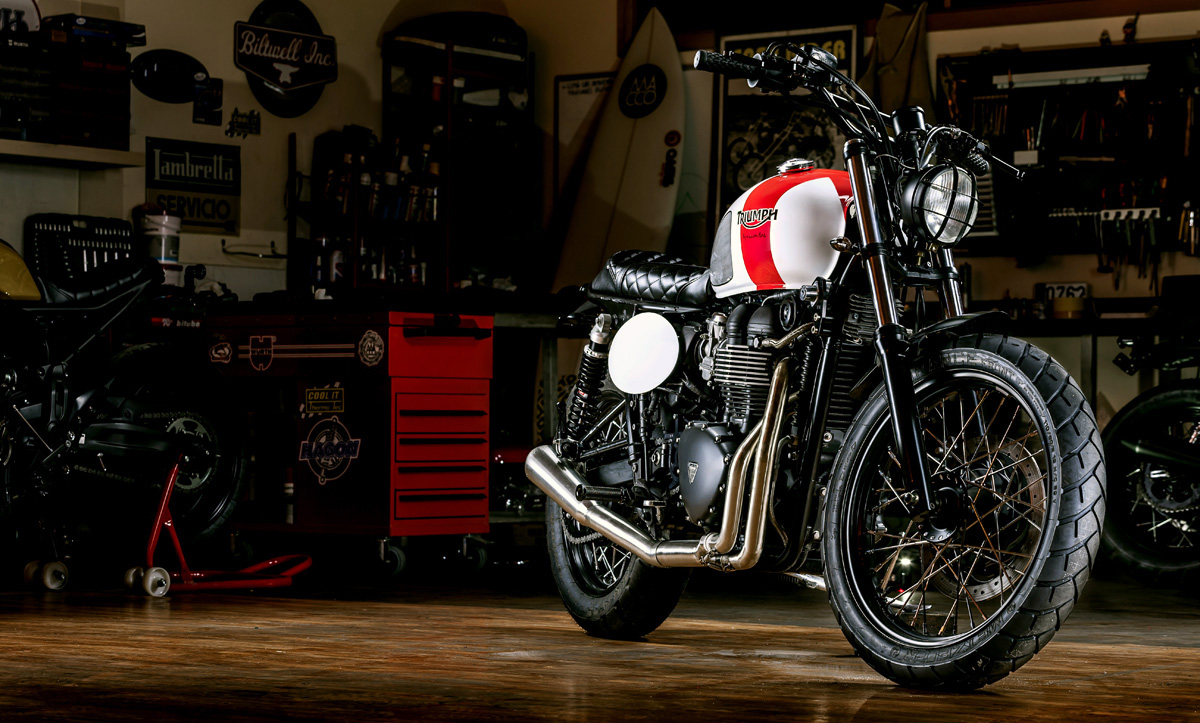 Finishing the Saint off are all the usual parts and accessories we come to expect on custom Triumph Twins, including relocated mini turn signal, LSL’s Ignition and rectifier relocation brackets and a LSL sprocket cover. 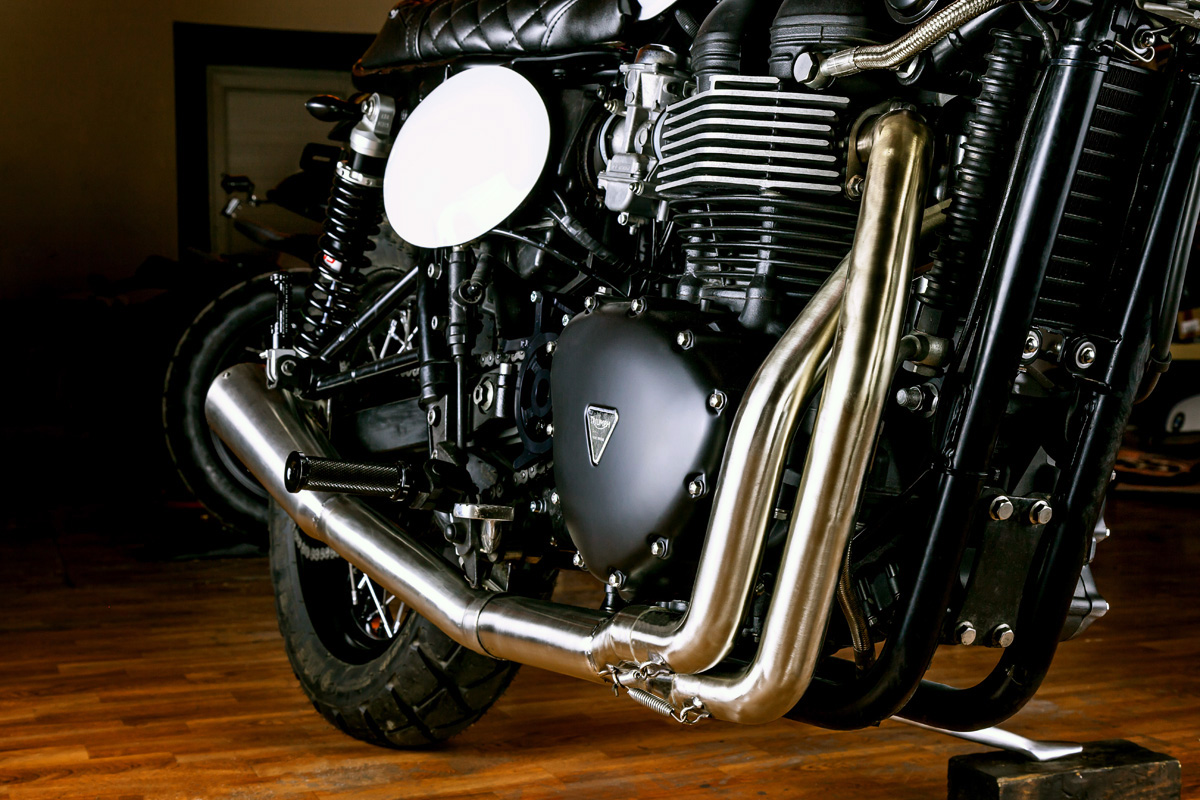 This Triumph Twin now sits on the stock wheels, coated black and fitted with a set of our old favourite the Metzeler Tourance tire (110 front/ 140 rear). Finally no custom would be complete without a better sounding exhausts, with the Saint being fitted with a full custom 2>2 system. 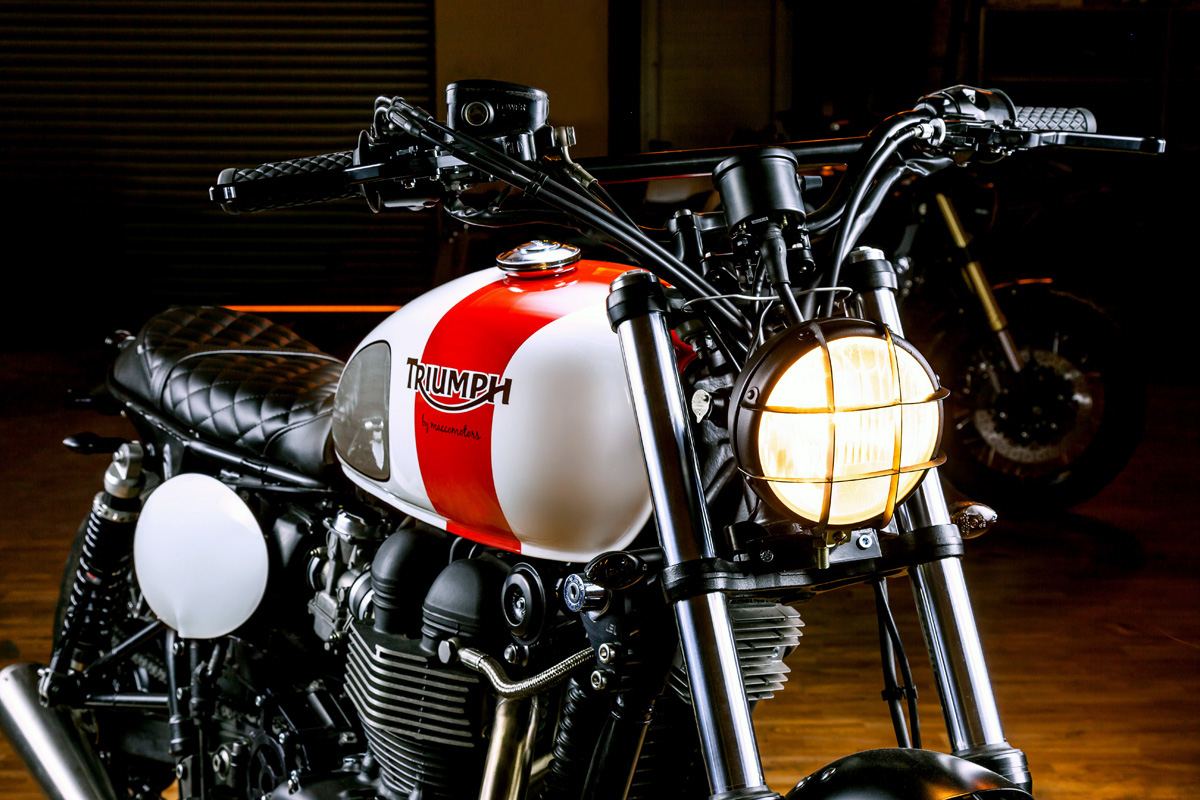