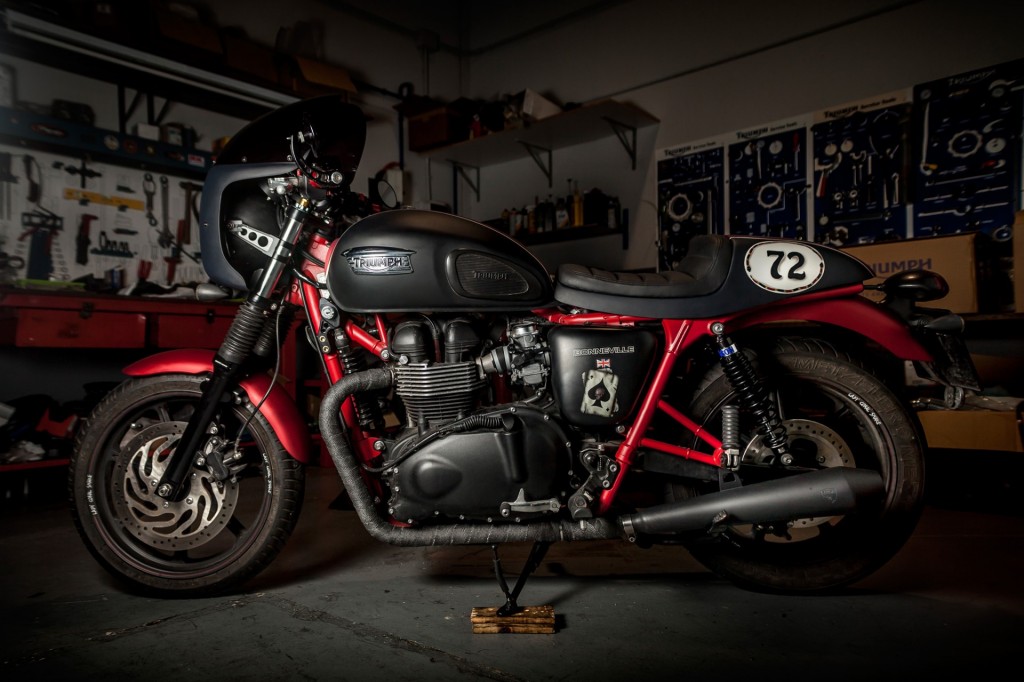 A great place to start a bike project is a great looking donor bike, and what better than the already attractive 2013 Bonneville SE, with its red frame and super sexy matte black fuel tank, with matching bright red stripe.

Unusually the Triumph SE looks custom out of the crate, though like other Triumph models, it too still needs a little something to make it exciting and of course unique.

As any woman will know, there is nothing more socially awkward than going to a dinner party and seeing another woman in the exact same outfit. Or in this case, sitting at traffic lights next to another biker on the exact same motorcycle.

To combat this embarrassing situation the chaps at COOLmotorcyles (Spain)  have taken the SE and without drastically changing the its overall look or charm, have produced something that is every bit as attractive, but is now wearing a motorcyles version of a Little Black Dress with equal effect. But this Little Black Dress is not by designers such as Gucci, Prada or Dolce & Gabbana, but by LSL, Joker Machine, 8Negro, Andreani and Hagon their motorcycle accessory comtempories.

The guys at  COOLmotorcyles have extended the original SE detailing to include the Viper Screen and 8Negro Cafe Racer seat. The stock bars have been binned and  replaced with the ever popular LSL items, which in turn have been adorned with super sexy Joker Machine bar ends.

The suspension has had a much needed upgrade with Andreani front and Hagon Road 2810 at the rear. BC Black Predators which have been wrapped, now take care of how the bike will sound when sitting at those previously mentioned lights, and will also give that other Triumph SE rider something to listen to as you roar away in front of him when the lights go green.