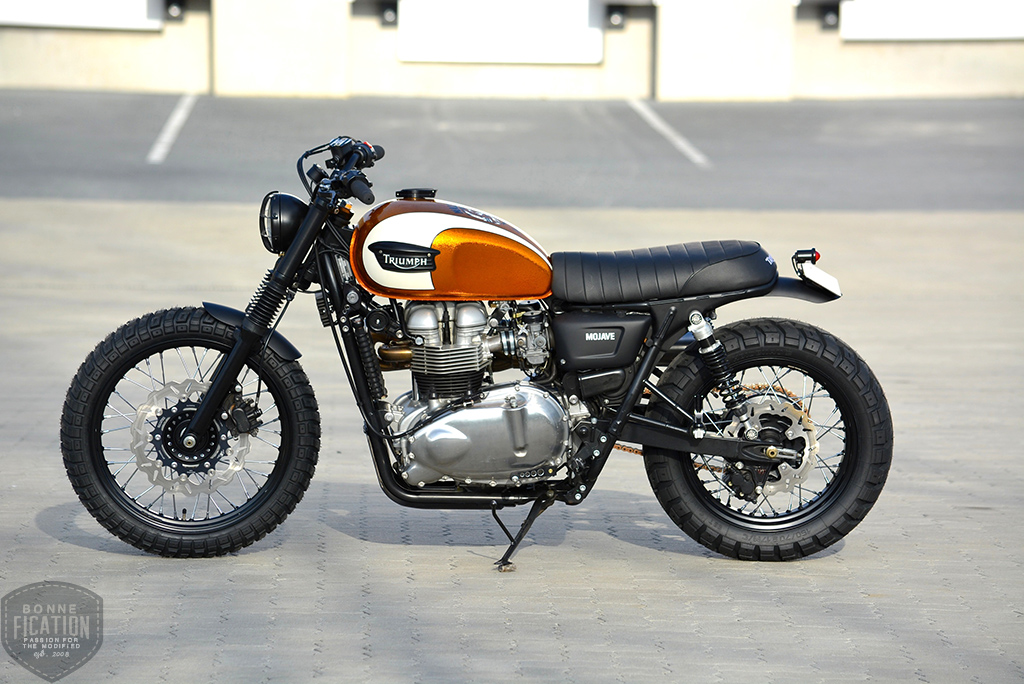 The Mojave Desert which its pronounced mo-hah-vee, is a vast area of barren land spread between California, Nevada, Utah and Arizona, and was once home to some pretty hairy motorcycle rides and races. The Mojave had little to offer the modern man with its sun scorched, Joshua trees littered landscape other than being a great place to take a motorcycle for a blast. Which is exactly what hundreds of motorcycle loving thrill seekers, as well as the odd actor did on Sundays. Today those desert riders who could once point their knobbly tired motorcycle at a landmark on the distant horizon and just open the throttle, are now limited to designated tracks where trail-closure signs ‘outnumber the cacti’. 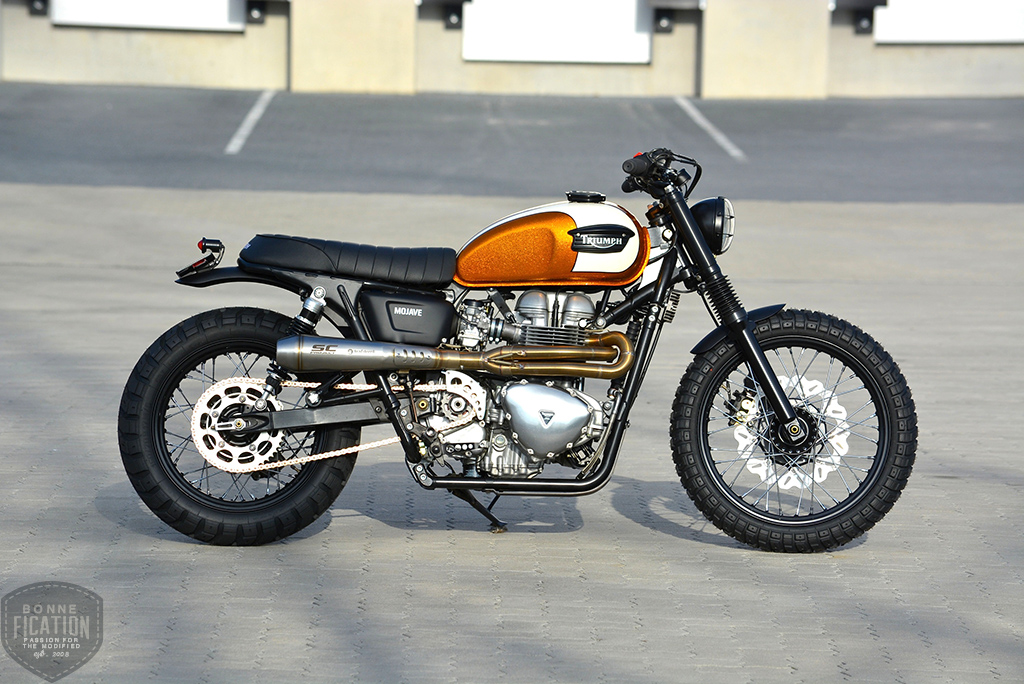 In the late fifties and sixties the motorcycle which many of these freedom seekers would load onto the back of pickups and drive into the desert was the Triumph Bonneville, a bike which was built in the UK and shipped across the world to do this very job – making it popular with riders and racers including Hollywood superstars. Those bikes became known as ‘Desert Sleds’ and is a style of motorcycle which is very popular with the modern Hinckley Triumph Twin owner. But like those early desert races, the modern Triumph is not what it once was – though it is still able to offers a rider a degree of open throttle freedom which many can only dream of. 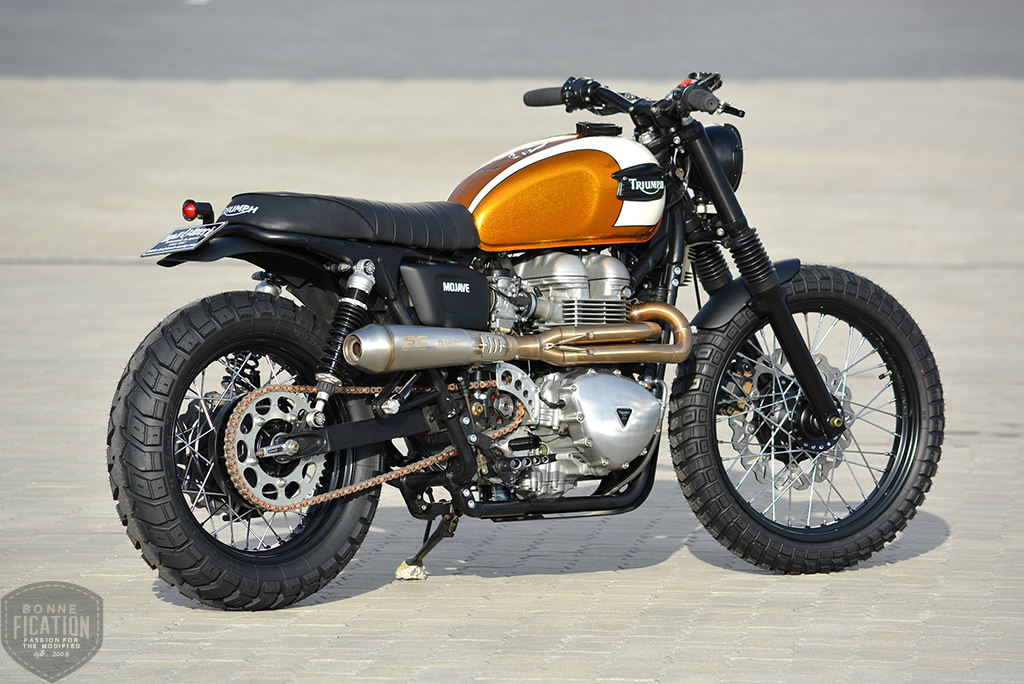 Marcus Walz of Schwetzingen, Germany based WalzWerk racing is just one of a handful of motorcycle builders worldwide who have turned his skills, much like Bud Ekins, to making the new Triumph Scramblers into wanna be Desert Sleds. Naming these retro classic WalzWerk Twins, the ‘MOJAVE 900‘. To mark the the success of these MOJAVE 900’s, a 10th bike was built based on a 2003 carb Bonnie with 30,000 km on the clock. 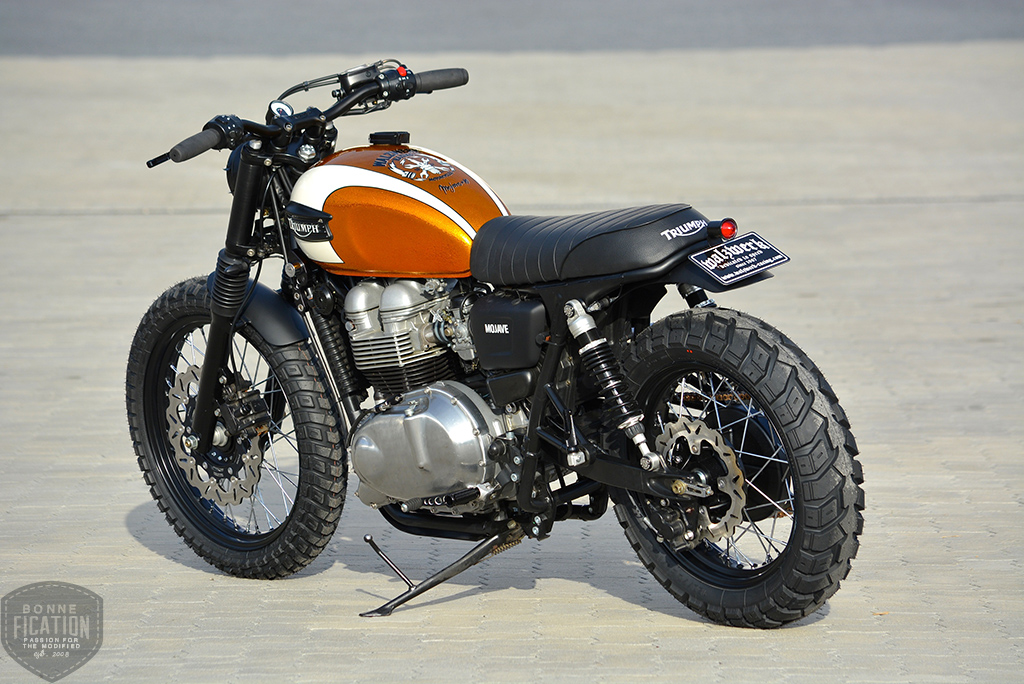 The early model 790cc engine was given a service and overhaul, with the engine capacity being increased from the 790cc to 865cc. On re-assembly the ugly braided oil lines which run from the cylinder head to the oil cooler where replaced with those from a later model, resulting in a cleaner looking engine compartment. Adding to this increased performance the Bonneville was re jetted with a Dyno Jet-Kit,  fitted with K&N filter and a high 2>1 custom exhausts system from Italian manufactures SC-Project. 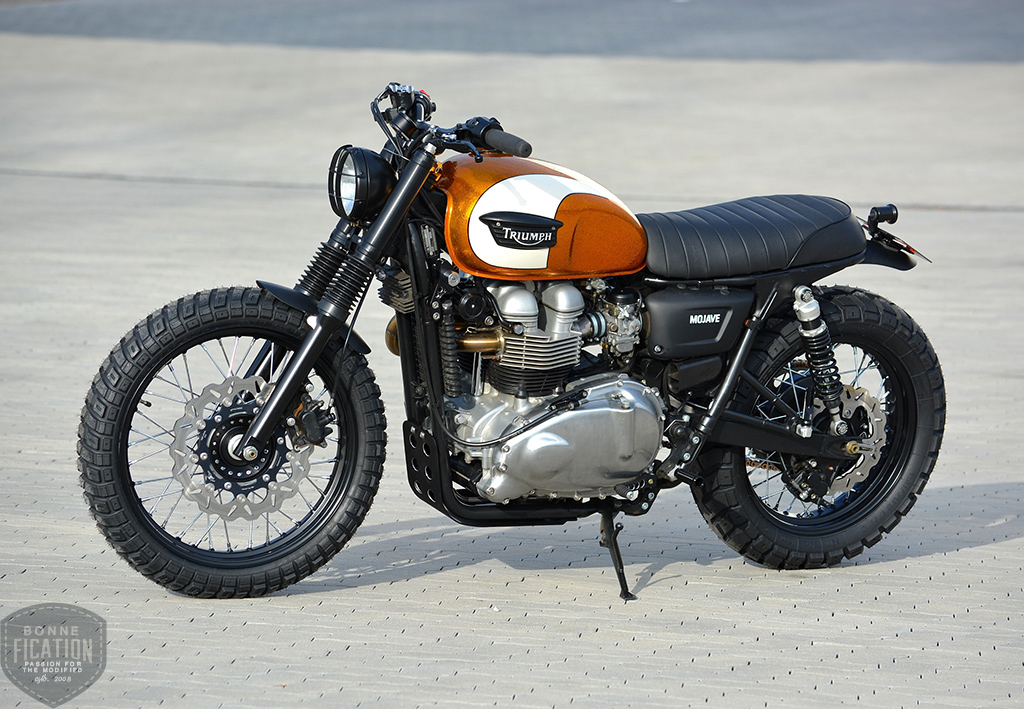 Moving onto the bike itself, the frame which this 2003 Carb model Triumph Twin left the UK factory with was shortened and looped with a custom rear mudguard and seat base both being fabricated in aluminium to fit the newly modified frame. 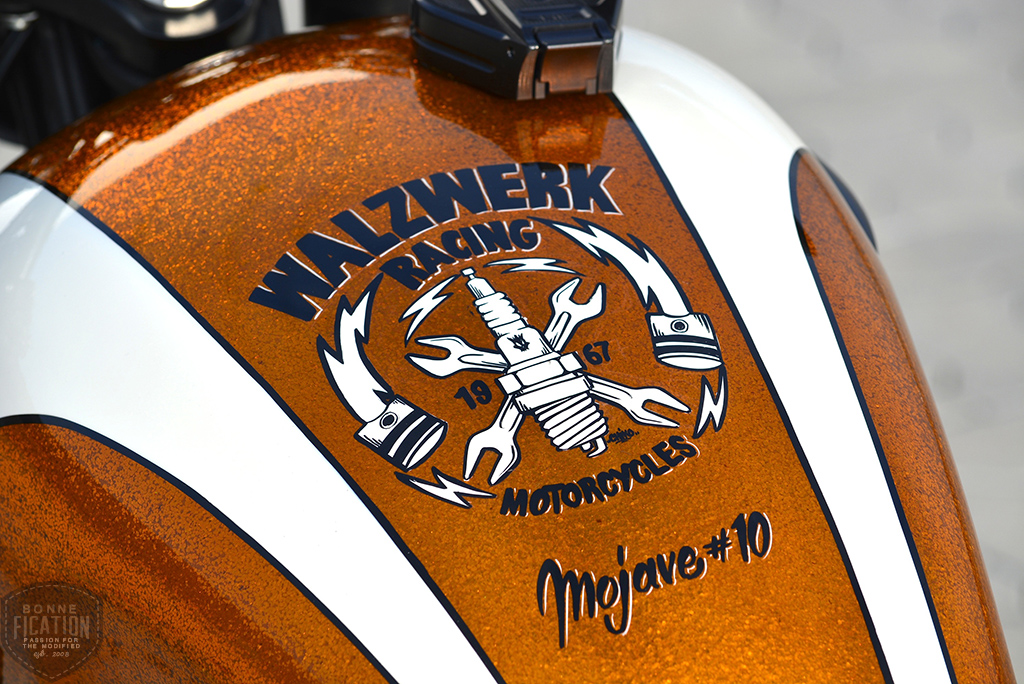 Marcus went against the trend of drab colours, instead opting for House of Colors “Pagan Gold Metalflake” (woof!) finished off with 20 layers of clear coat.  The tank was then given a set of tank stripes in  “old-white” an topped off with hand painted graphics by Chikos-Pinstripes, and finally crowned with black powder coated tank badges, with the Triumph letters being painted in  the same colour as the tank stripes. 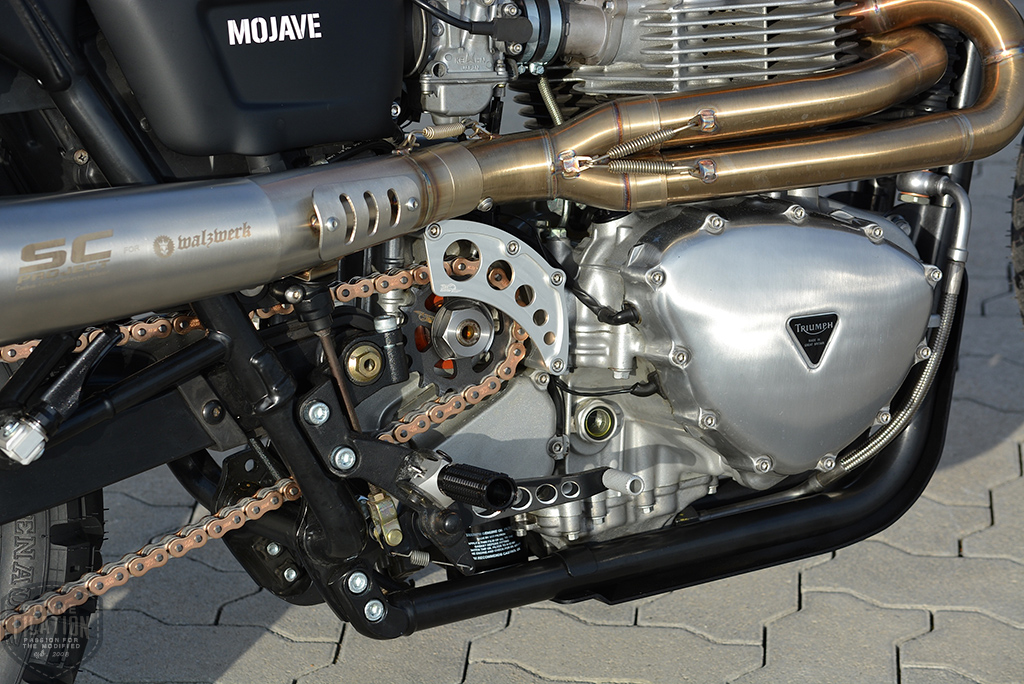 In contrast to the tank, the alloy mudguards and JVB side covers were finished in flat black to match the new 2015 Triumph Scrambler wheels (which came off a previous project.) fitted with Galfer Wave Discs, and shod in Heidenau K60 Scout’s (150/80-17 rear and 120/70-19 front). 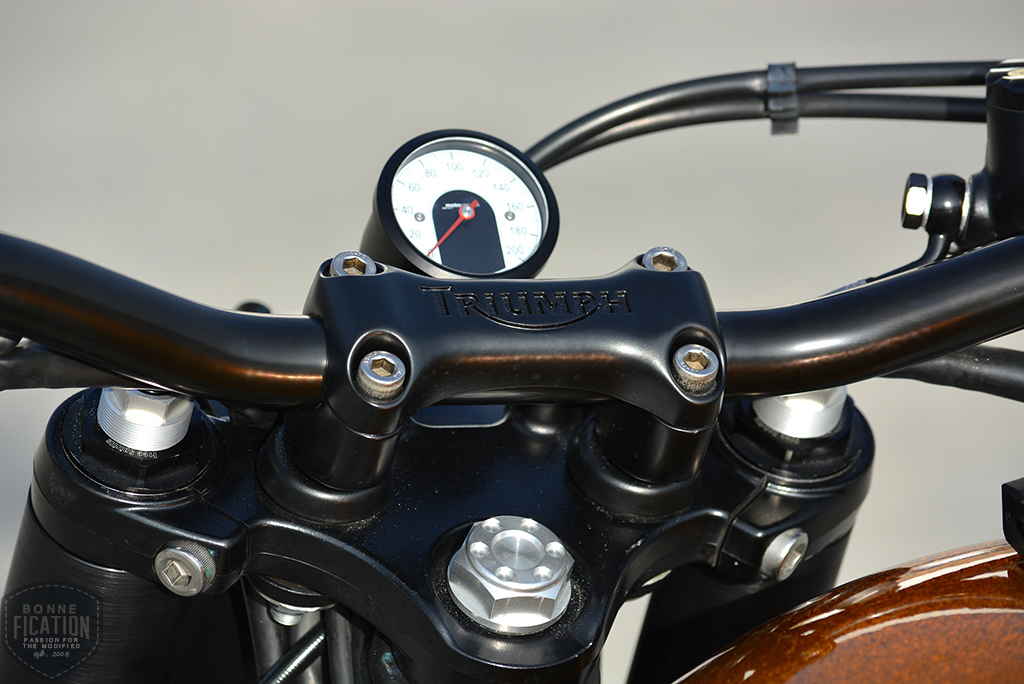 Sitting on the bike the rider will  look down on Biltwell bars fitted with stock switches and the OEM front brake reservoir – which now features a anodised Joker Machine reservoir cap. The levers the bike came with are gone, being replaced with those from LSL. 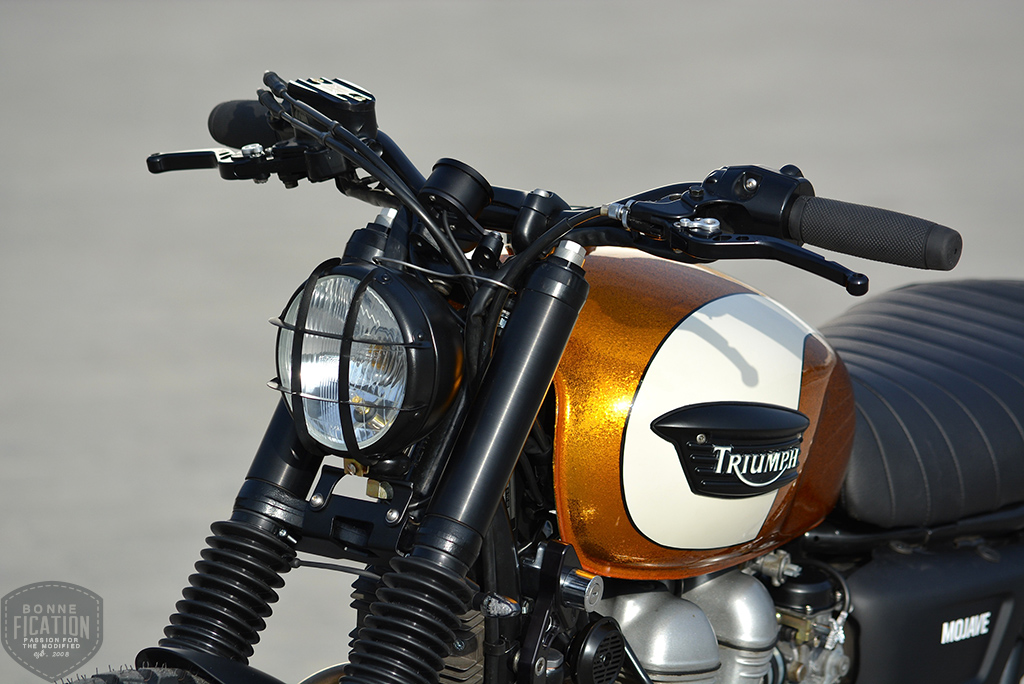 The speedo is the super popular Motogadget Tiny, which is indeed expensive, especially when fitting to the later CanBus Twin – having used cheaper alternatives on builds myself, the Motogadget product has proven itself, as my own is still working, not rusting and hasn’t suffered from moister fogging on the inside of the display. The headlight Marcus tells me was found on eBay, and was destined to spends its life fitted to a Tractor.

As you would expect the MOJAVE 900 has had a much needed suspension upgrade, being fitted with YSS rear shocks, with the front end being lowered and equipped with Wilbers progressive springs and preload adjusters. Finishing touches to the bike include a Free Spirits sprocket cover, brake and shift levers, LSL foot pegs and everything else I have not mentioned. 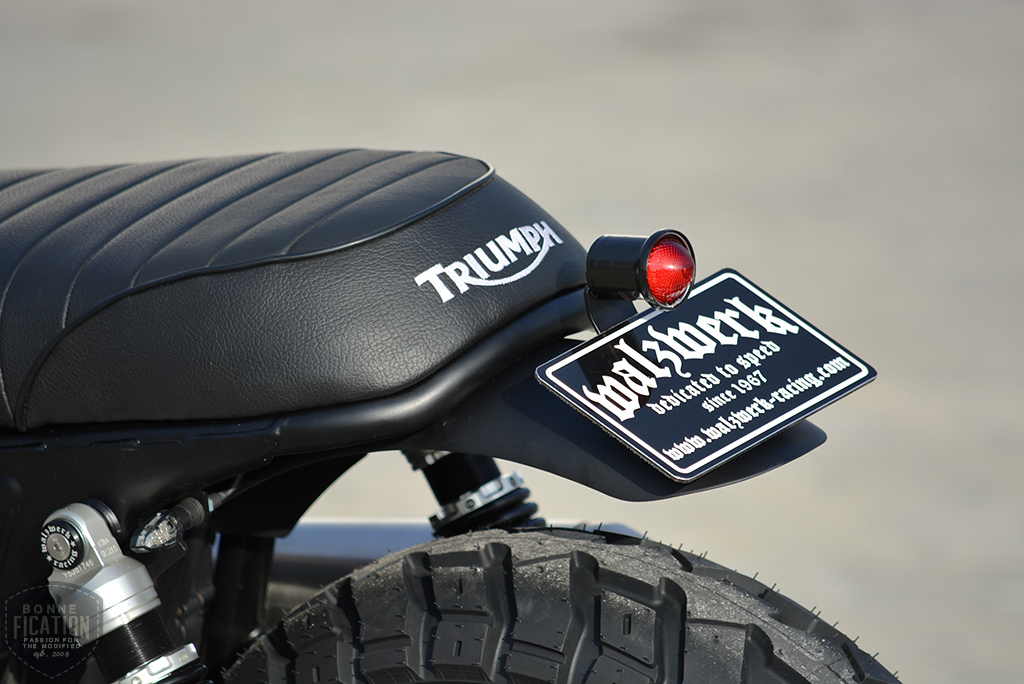 Its clear why Desert Sled styled Triumph Twins are so popular, especially when they look as good as the MOJAVE 900 – but maybe there is more to it, perhaps retro ‘Desert Sleds’ represent a freedom and an innocence modern motorcycling has lost…. then again, maybe thats just bollocks and it just because these bikes look so good!