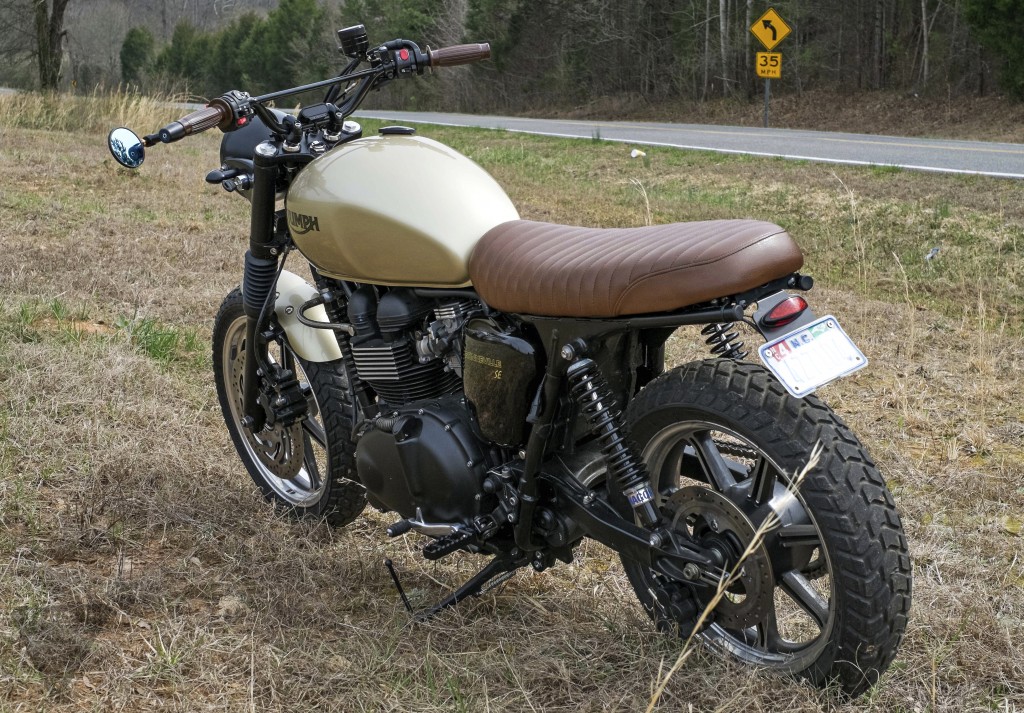 This 2012 Triumph Bonneville is John Colby Calhoun second ‘Garage’ build, his first being a 1981 CB650 which he gave the ‘Bratstyle’ treatment. The CB650 was later sold to make room for John’s next bike, which needed to be something with classic styling and the all-important ‘modern reliability’. With that in-mind, what could be better than a modern Triumph Twin.

” I loved the retro look of this shade of gold on the classic lines of the Triumph Bonneville.”

After just a year of ownership, running the bike as a ‘Cafe-Racer’, John decided he wanted to go for a “Suburban” look on the Bonneville. To archive the style he wanted, John swopped the Arrows 2-2’s, which had been fitted from new for the compact Zard’s 2-1, which John reflects look better with the gold tank.

To make the Bonneville more off-road capable, the OEM (crap) shocks where upgraded with Hagon’s and the tires changed for Pirelli MT-60RS (160/80 rear /120/70 front). Also the standard Bonneville handlebars have been changed for much wider Moto items, giving John a more comfortable riding position and allowing him to stand to suck up the bumps. 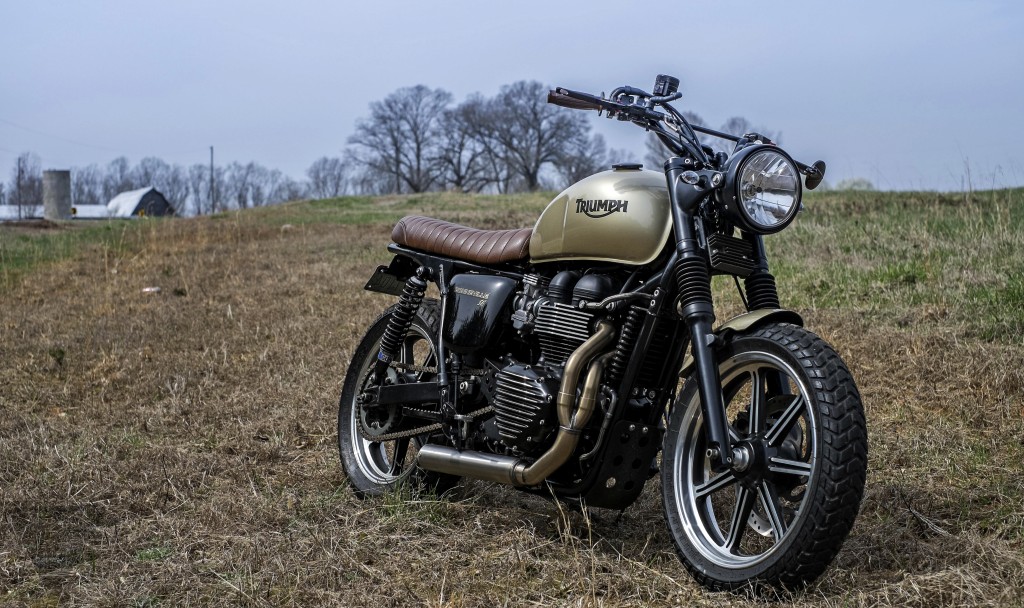 The rear mudguard (fender) has been removed altogether and an integrated taillight fitted. The Seat is the British Customs Slammer seat, which John has made a darker with leather dye. The stock Arum gold side covers have been swopped for black Bonneville SE items, both of which have ‘Bonneville SE’ written on them in gold. In hindsight, John feels these cover are a little more appropriate as ‘SE’ could mean “Suburban Edition”. 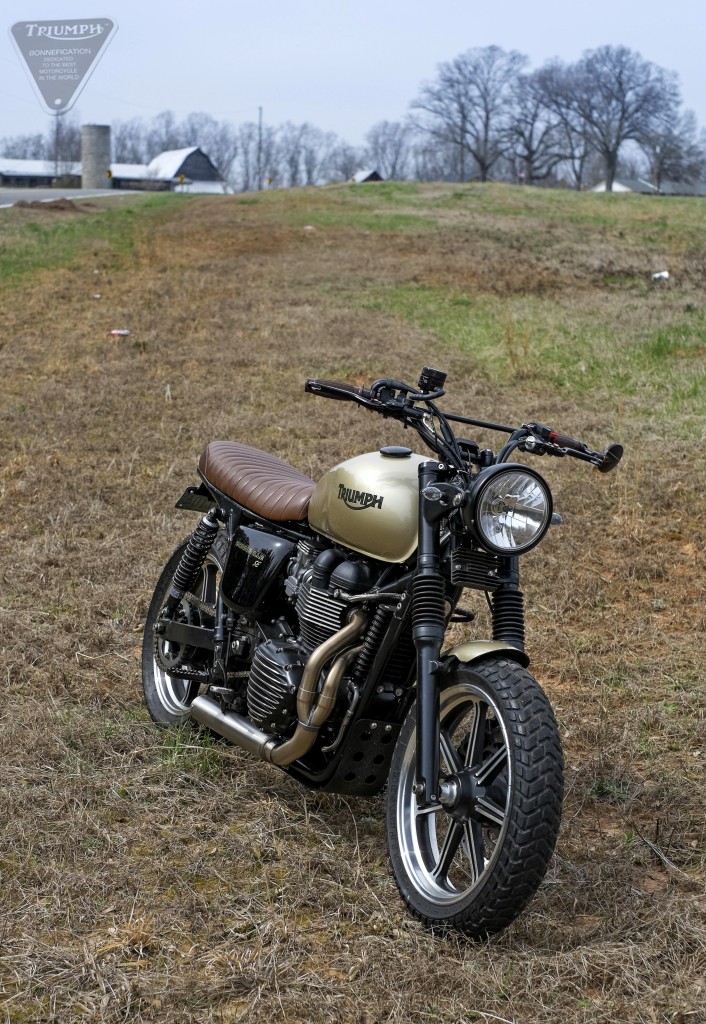 After looking through the Bonnefication archives for inspiration, John decided to keep the stock headlight and mounts, simply having the stock bucket power coated black. The standard speedo and idiot lights have been replaced in favour of the very popular Motogadget Mini, with Combi frame and the TRI buss connector. 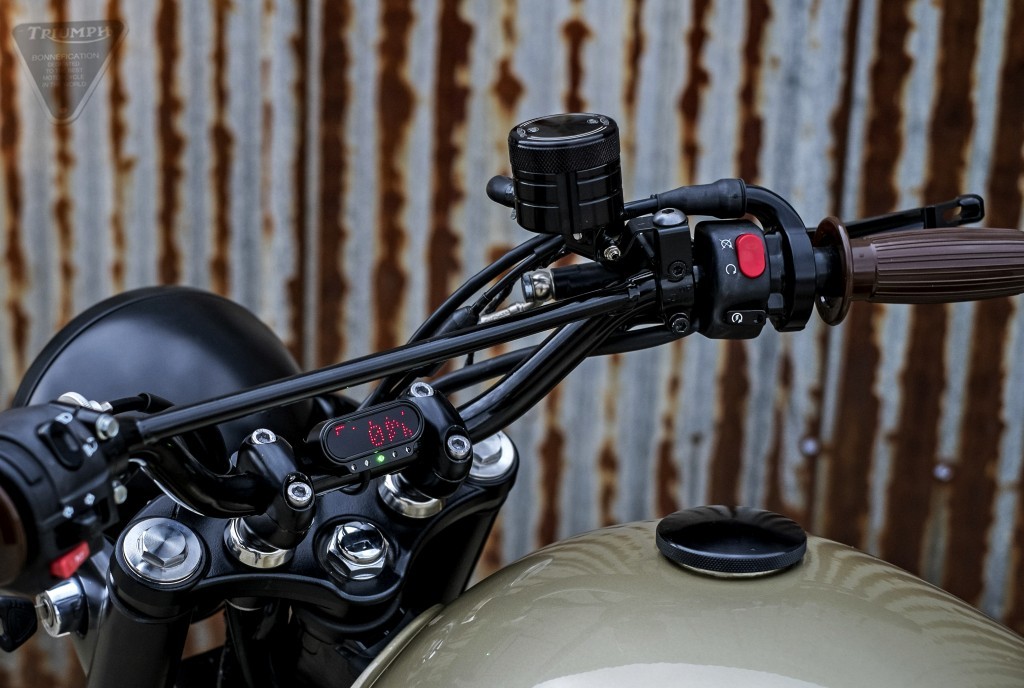